8 Most Expensive Castles in the World

The earliest castles date back to the Middle Ages when nobility and military groups built structures to fortify the private residence of a noble. The main building in the castle’s inside is known as the “keep.” The rest are battlements, walls, and towers. The Normans may have created the concept of the castle, but it was used across Europe in the Middle Ages by many monarchies and for many wars.

Continue reading to learn about the 8 most expensive castles that you can buy today, the ones that have traveled through history to be bought and sold for millions by people who want to live like medieval royalty in the 2020s. 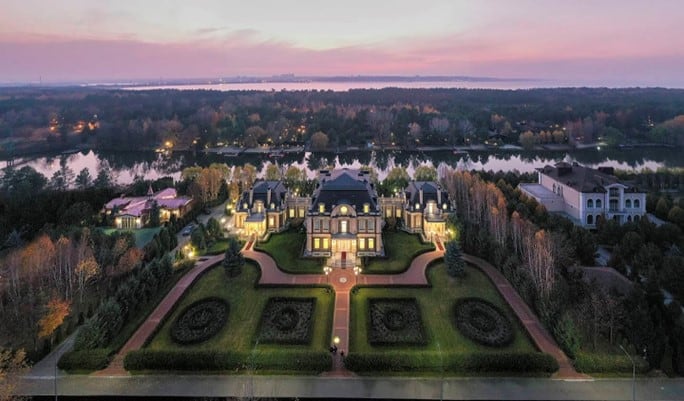 It’s unknown when exactly this castle was built in Kyiv, Ukraine, right on the river Dnieper. Listed as, “Castle Vyshhorod,” the building consists of only 5 bedrooms, making it the smallest of the structures on this list. But that doesn’t mean it isn’t a massively impressive property.

The building contains an indoor swimming pool and gym, complete with a sauna and jacuzzi. It has playgrounds, a 15-car underground garage, and jogging tracks. The castle is on the market for $15,000,000.

Kyiv is a major capital of industry in Ukraine, containing the Kyiv Hydroelectric Power Plant, Kyiv Reservoir, and one of Ukraine’s most industrious metropolitan centers. It’s also one of the oldest in the world, dating back to before 1,000 AD. 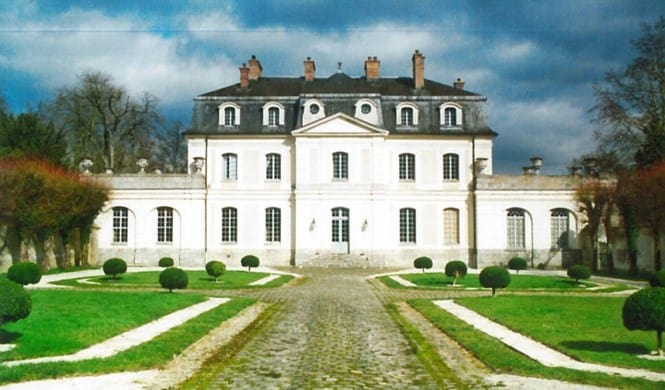 Castle Maincy is in the Ille-de-France, with numerous facilities to satisfy an outdoors-loving architecture fan who can afford its nearly $16,000,000 price tag. The property encompasses several stables, lakes, and tennis courts, as well as France’s first-ever Parc a l’Anglaise, or English-style park and formal gardens.

The property at Castle Maincy contains multiple reception rooms, catering buildings, and event spaces. The main house or chateau itself has a library, gorgeous entrance hall, 10 bedrooms in total, multiple cellars, and more.

The nearly 300-year-old property contains many outbuildings, some added later. Many of them are garages, storage rooms, and stables. Many more can be converted into apartments for guests or workers. There’s also a guardian’s lodge as well as multiple greenhouses, a formal garden, and a walled kitchen garden in the English style. 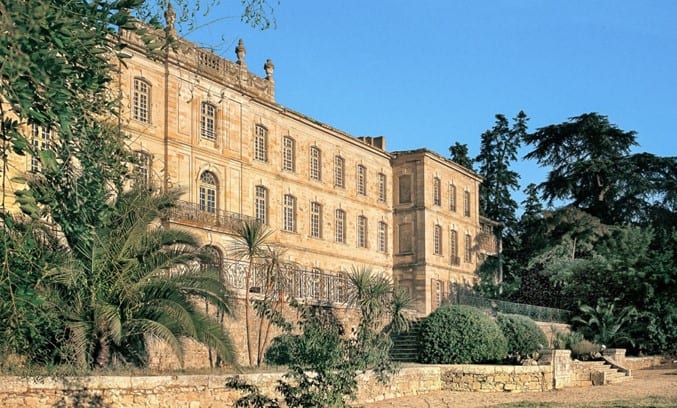 “Castle Pezenas” is what we are calling an unnamed castle in Pezenas, France that is currently for sale. It encompasses over 6,000 sq. ft of interior room, including 30 rooms (half of which are bedrooms) and a Romanesque church built in the 1100s. Most of the rest of the palace was built much later in the 1700s, named the Petit Versailles du Languedoc.

The chateau is surrounded by walls and land totaling around 10 acres. In total, the estate contains around 81.5 acres of land, about half of which is devoted to the Castle Pezenas’ vineyard. Much of the property is enshrouded in woods, but some have been developed into many outbuildings and terraced gardens.

The estate of this castle in Pezenas, France is covered in garrigue, which is a French term for hillside vegetation that grows along the Mediterranean, usually consisting of a wild mix of juniper, lavender, thyme, rosemary, and other herbs.

This castle’s estate is largely overgrown and requires a complete overhaul by its new potential buyer. Buying this estate will net the new owner a tax break to get the estate back in operation. 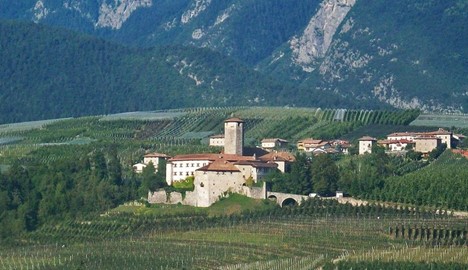 The oldest part of Castel Valer or “Lower Castle” is from the 14th century, about 700 years old. The Upper Castle is more recent, having been built in the 16th century. The central tower of Castel Valer is 40 meters tall, making it the highest in Trentino, Italy.

This castle (or complex) is located in the Val de Non Valley. It has a fortified structured dating back to the medieval Roman designs and over 100 chambers in the main house, including 15 bedrooms. Some of these are lavishly decorated, including famous rooms like “Sale Madruzziane.”

This castle has been owned by its current residents, the Spaur family, since 1368 (and you thought your family had deep roots!). The castle is covered in art, with frescoes by the famous Baschenis brothers as well as a chapel devoted to Zaragoza’s St. Valerius. 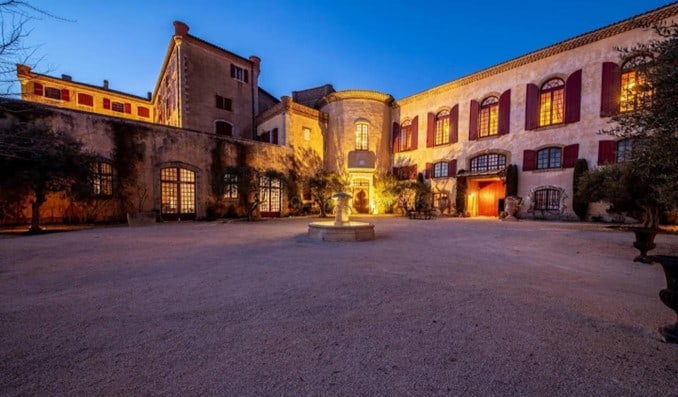 The Castle La Verdière is one of the biggest on this list with 25 bedrooms and a sizable property. The main building encompasses 50 rooms in total, including multiple living rooms, salons, and suites. The valley nearby in the Provence-Alpes-Cote d’Azur in France is expansive, full of rare foliage and incredible views.

This castle is surrounded by walls, with multiple outbuildings and pools on the property. It was built over 900 years ago, making it the oldest on this list as well, with a history stretching back to numerous generations of Provence nobility. The castle is currently on sale for $19.314 million.

The Castle La Verdière is very near the communes of Castellane, Luberon, Moustiers-Sainte-Marie, and Mont Ventoux. Throughout history, these communes have supplied work for the castle by royal decree, resulting in many complaints. The French Revolution even resulted in the castle’s seizure and potential (but ultimately avoided) destruction. 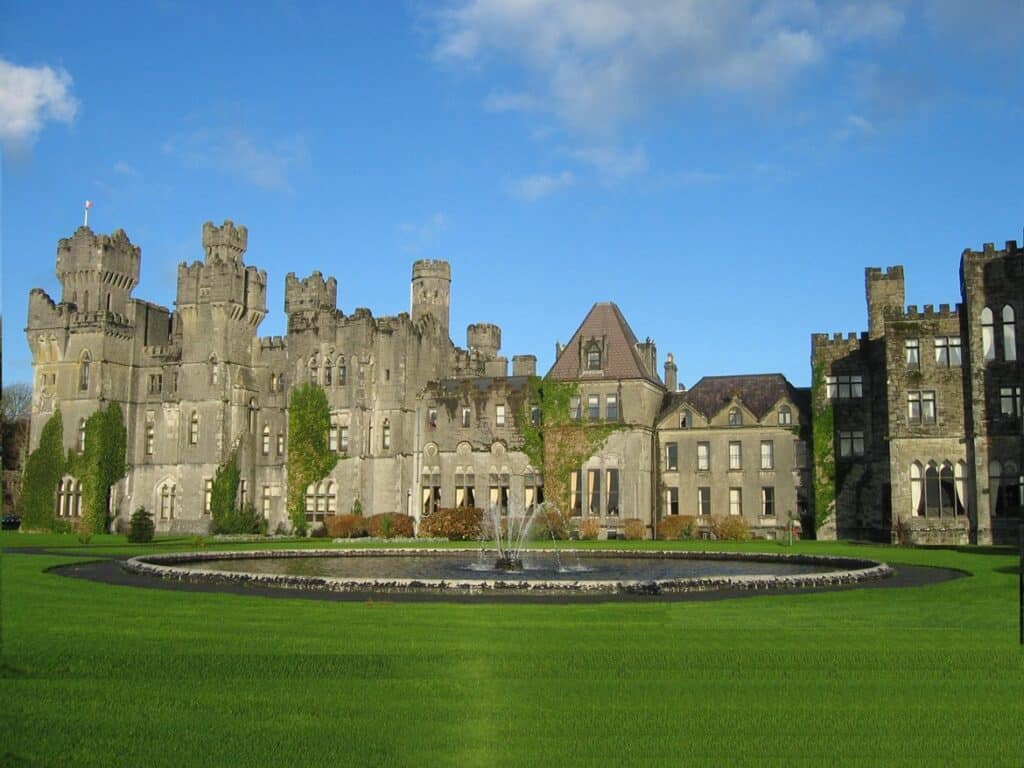 Ashford Castle has been expanded and renovated over many centuries until now becoming a luxury hotel in Lough Corrib, Galway in Ireland. It is one of the most stunning and desirable hotels anywhere, with a 5-star luxury rating, owned by the Red Carnation Hotels.

This castle was built in 1228 (or at least, a version of it was). Under the rule of the de Burgos, Ashford Castle persisted, eventually sustaining a huge battle between de Burgos and the President of Connaught. The castle was lost to Connaught in 1589, resulting in many changes, including a fortified enclave added to its structure.

For centuries, Ashford Castle has held a publicly acknowledged right of way over its bridge. The bridge is commonly used by the families living on the castle estate.

Gerry Barrett, then owner of the castle, tried to install an electric gate at the bridge to prevent locals from using it, a decision that was protested in the High Court, joined by local councilors to support the centuries-old standard. 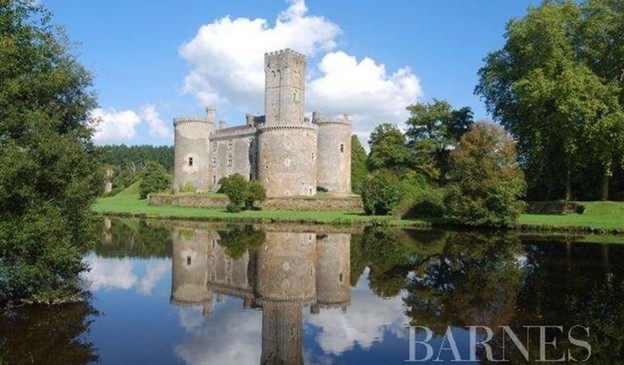 Castle Limoges, one of the oldest on this list, was built sometime between the 12th and 15th centuries and has been fortified after many encounters and owners ever since. The castle features 16 bedrooms with 2 lifts, a library, a meeting room, a movie theater, a music room, a billiards room, and more.

The castle is so old that it still has a dungeon, defensive towers, a drawbridge, and original battlements. Standing in the inner courtyard of the castle should bring back sensations of the old country in this ancient structure, surrounded by farms, ponds, and meadows.

Castle Limoges also has an original machicolation, which is a floor that opens in a battlement to support corbels, which are brackets made of stone or metal that stick out from battlements and allow boiling oil, water, or quicklime to poured through onto invaders. 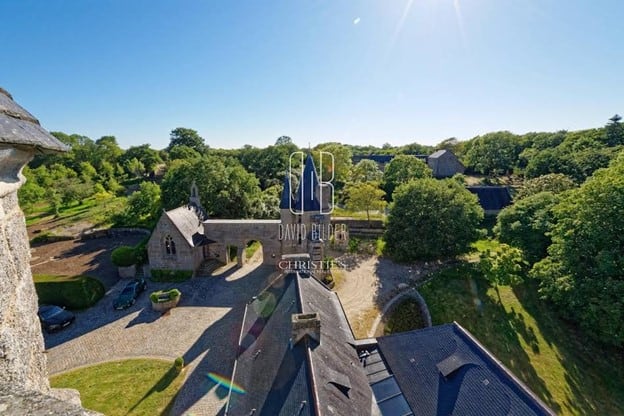 The most expensive castle is Castle Lorient. This castle, currently for sale, is known affectionately as “the castle in the woods” due to its unique situation on 2 kilometers of a shoreline of forest-lined river banks. The castle was built sometime between the 15th and 18th centuries, with various work done throughout, making it over 300 years old at least.

The park that surrounds the building is huge — over 100 acres wide. The inside of the castle opens into an open-air foyer with a glass roof at the top of a staircase, leading into numerous reception rooms, each equipped with a fireplace and windows. It only has 8 bedrooms, but the castle is enormous with 3 full offices, multiple libraries, and more.

Castle Lorient is currently for sale for $26.825 million.

The castle grounds include several outbuildings, including a caretaker’s house, reception room, market hall, and chapel. There are Japanese gardens to give the estate a multicultural relaxing atmosphere as well as a honey factory, boathouse, workshop, farmhouse, magic hall, swimming pool, employee lodge, and monk’s tower.