10 Rarest Mason Jars Ever Made

The Mason jar was a welcome invention in the mid-nineteenth century, providing families the ability to preserve goods when refrigeration technology was not readily available. While the concept seems basic enough—seal a jar tightly to prevent food from spoiling—perfecting the jar’s sealing and storage abilities remained an ongoing project for decades. With so much innovation, rare and/or forgotten versions of the Mason jar were inevitable. And, because the Mason jar’s value depends on several factors, the prices vary from tens of dollars to thousands. Read the list below to discover some cool facts about some of the rarest Mason jars around. 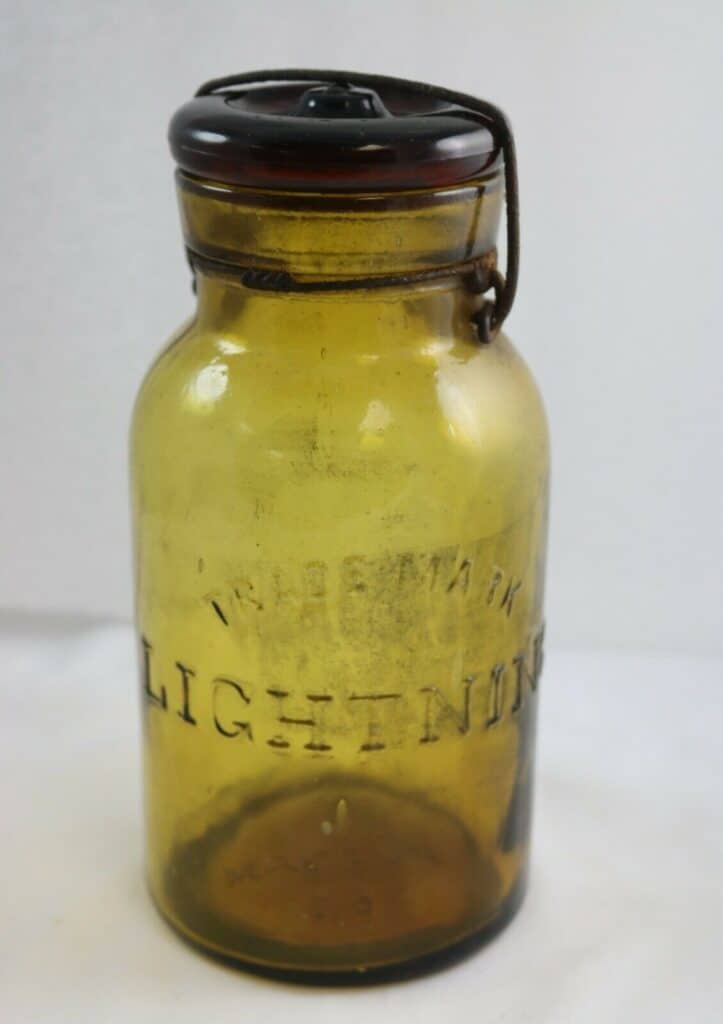 The lightning jar’s name referred to the wire seal that attached the lid to the body of the jar. Users could put hot foods in the jar and close it as quickly as lightning, reducing the possibility for burns. Despite the purported ease of use, the lightning jar’s wire fixing came with its own issues.The wire became loose after a while, making it incapable of properly sealing goods. Plus, users had to replace the rubber rings on the top of the jar after each canning process. Companies stopped producing lightning jars by the late 1960s.

Despite its issues, different companies produced the lightning jar for about 50 years.

Hazel-Atlas was a vintage Mason jar brand that created products from 1902 to 1964. While other companies adopted the Hazel-Atlas jar models, they are not to be confused with the original designs. An authentic Hazel-Atlas jar features a combined H and A symbol on the bottom. The EZ Seal was one of Hazel-Atlas’ round Mason jars. It had a glass lid with a metal clasp closure that tightened via a lever. This type of sealing method is no longer considered safe for wet, perishable goods but works fine for dry goods. The EZ Seal jars came in a few colors, including blue and amber.

The EZ Seal jar came in half pints, pints, quarts and half gallons. 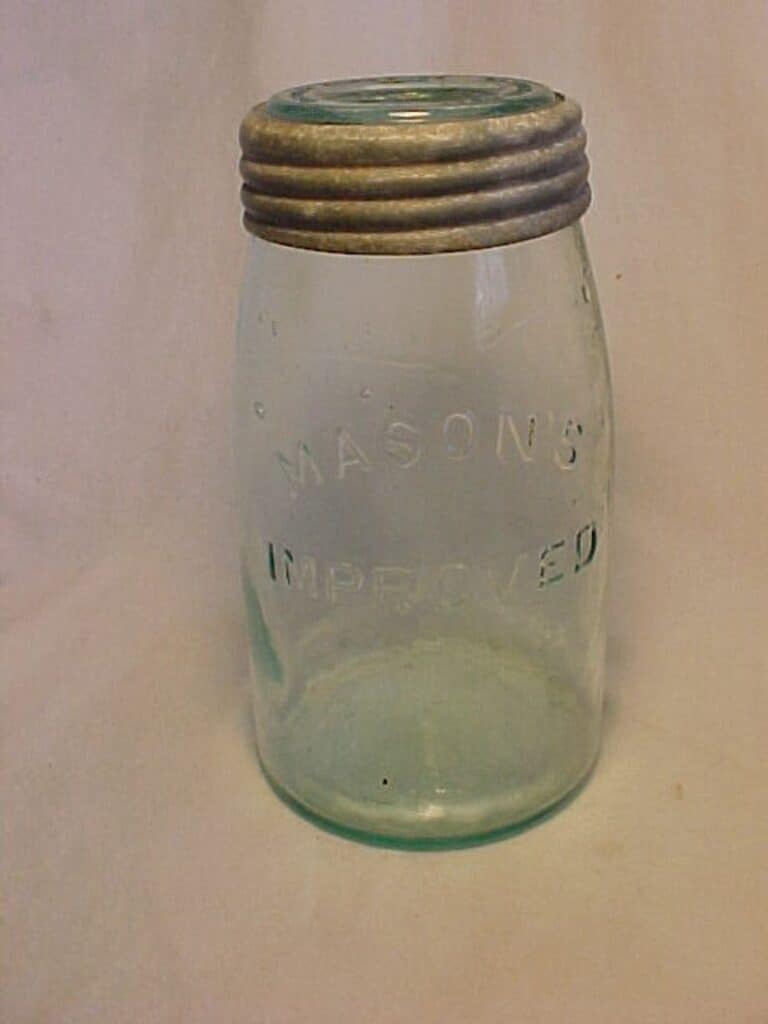 The Mason’s Improved jar was the first Mason jar that had a glass lid with a metal band, replacing and improving upon the first fully zinc lid. Its inventor was none other than John Landis Mason, a tinsmith who created the original Mason jar in 1858. Unfortunately for Mason, his patent ran out in 1879, after which competing brands created their own versions of Mason jars. As a result, he did not make much money off of his timeless creation.

There is another version of the Improved Jar from Australia that is green and has a much larger lid. 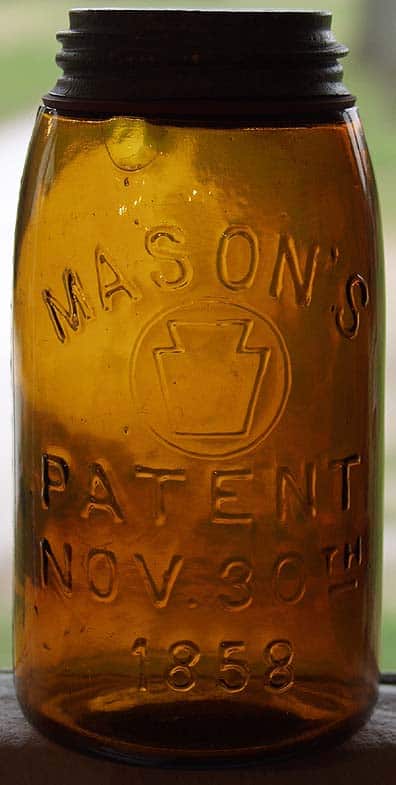 As mentioned in the previous bullet point, the zinc lid preceded the glass lid with metal cover patent by 12 years. Because this is one of Mason’s earliest inventions, it is quite rare and valuable. It features the words, “Mason’s. Patent Nov. 30th 1858” as well as a logo in the shape of a jar on its body. Like its predecessor, it also features a screw top lid and is noticeably narrower at the top than a typical Mason jar.

There was a resurgence in Mason jar use during World War II due to rations.

Year Invented: 1880
Unique Features: Beaver embossed on the jar
Cost Today: Can be over $2,000 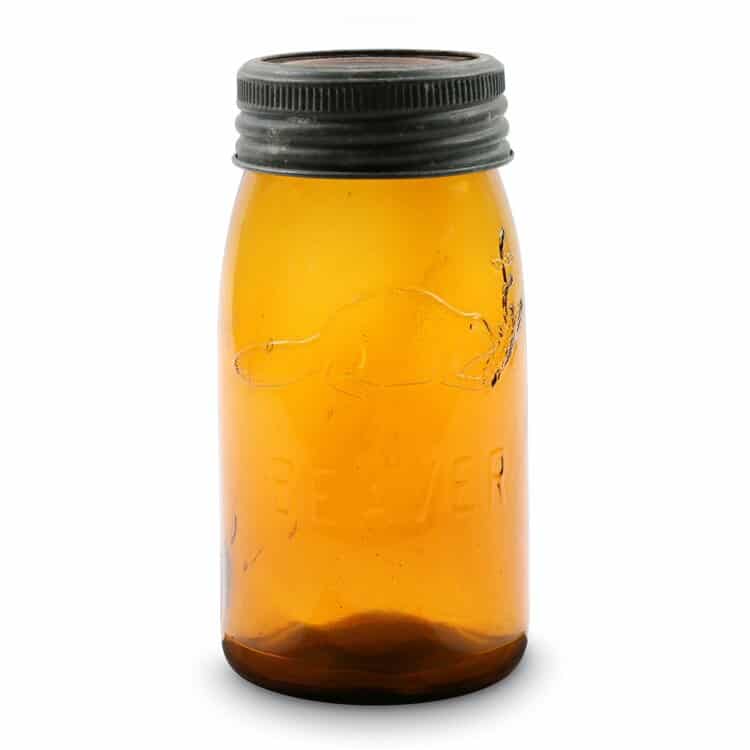 The amber Beaver jar is an antique Canadian Mason jar that features a beaver image on the front. It originates from Wallaceburg, a town that made most of Canada’s glassware at the time. Due to the older production practices and the lack of consistent measuring, each beaver jar is a different shade of amber. This color helps prevent UV rays from ruining the jar’s contents. In addition to the shade of amber, the jars’ overall condition, the direction of the beaver (left facing is more valuable than right) and the model categorizations all play a role in its price. The company marked which model the jars were for quality control using numbers and letters. Many number 13 jars were smashed due to superstition and, as a result, are rare and highly sought after by collectors.

Amber’s darker shade prevents oxidation, which is why many beer and pill bottles are this color as well. 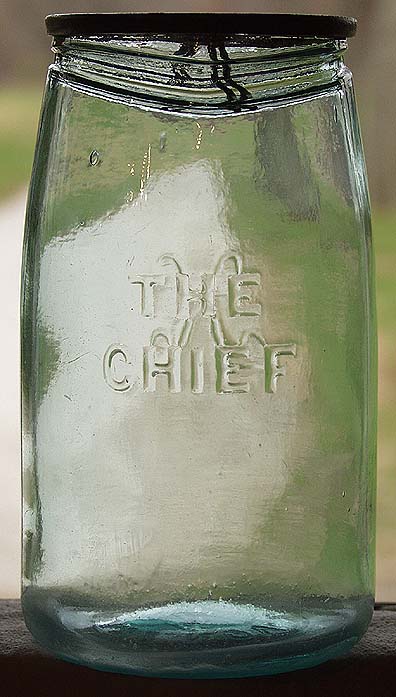 As a rare jar, it is quite difficult to find the chief jar online. It is made of clear glass with the phrase “The Chief” embossed on one side and the letter K embossed in cursive on the other. It is an atypical shape that is much larger than an average mason jar. And, if the replica lid is true to the original design, the jar does not close normally either. Rather than a screw top, the underside of the lid features wire fixtures that hook onto the sides of the jar to seal it. 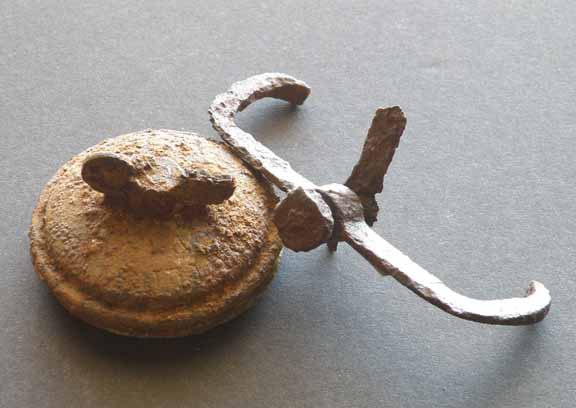 Willoughby stopple jars are difficult to find online and, when they are listed, cost a lot of money. They were built in the mid nineteenth century and featured lids with two handles at the top and a clamp to seal the lid in place. The stopples alone cost about $60 so a complete set would potentially be worth a lot more. Reproductions of this jar cost about the same.

One example of a Willoughby jar featured a woman in a fancy dress on the front.

The Magic Star Fruit jar features a glass lid secured by iron clamps, another innovation in sealing. The side of the jar features an embossed star logo surrounded by text. It was patented in Pennsylvania in 1886 by Hermann Buchholz. It was later produced by Wm. McCully & Co., a glassware company from the same state. While the jars came in several colors, the black amber is considered extremely rare. It is virtually never seen for sale and only a few are known to exist.

Jam can last up to two years in a properly sealed jar. 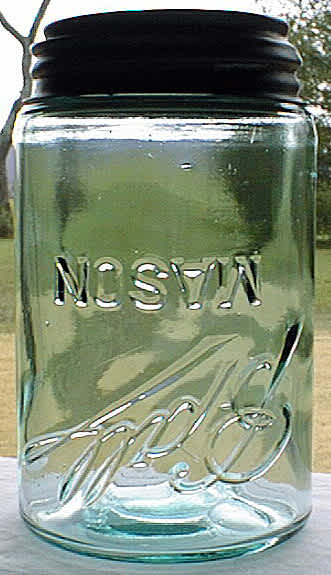 There are two kinds of Ball upside down jars. The first is an error jar with a label printed upside down. According to one account, the company only produced 12 copies before recognizing the problem. The second upside down jar was intentional so the jar could function as a dispenser. The latter can apparently cost up to $1,000 today.

The Mason jar’s lid was invented before the jar itself.

Year Invented: 1881
Unique Features: Wire attaches to the lid by hooking to the bottom of the jar
Cost Today: $23,500

This is the rarest Mason jar on this list. It is unique for several reasons. First off, Warren Van Vliet attempted to improve the jar’s sealing properties with a clamp that hooked over the lid. The clamp was secured with wire that wrapped under the jar so it was guaranteed to hold the seal. The jar also had a wider bottom to help with balance. These jars are so rare because they were only produced for four years before the Van Vliet factory burned down in 1885, taking with it the remainder of the jars, lids, and clamps.

Warren Van Vliet worked for the Union as a recruiter during the Civil War.

10 Rarest Collectibles to Ever Exist