8 Most Expensive Underwear You Can Actually Buy

Experts think the oldest underwear showed up about 7,000 years ago. These early garments were probably made of leather and used to protect hunter-gatherers as they navigated the ancient wilderness. Later, about 5,000 years ago, underwear was common in ancient Egypt where most people had some form of loincloth — regardless of their social class or wealth.

About 600 years ago, during the Middle Ages, some undergarments were made of rough fabric — like this rare bra found inside an old Austrian castle.

Jumping forward in time, people living during the 19th century often wore undergarments that went down to their knees or ankles. By the 20th century, the modern bra was invented by Mary Phelps Jacob as undergarments became shorter. Men’s boxers were introduced in the 1940s and the older term “drawers” was mostly replaced with “underwear” or “underpants.”

Approximate Value: $195
Designer or Maker: Versace
Item Origin: Italy
Interesting Fact: These trunks have to be washed by hand 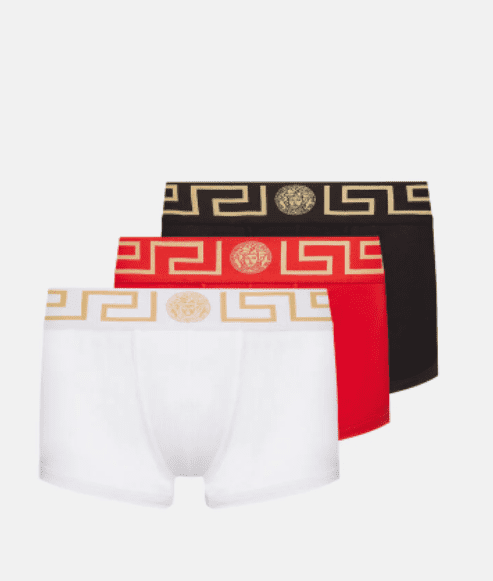 The Versace brand was founded in 1978 by Gianni Versace, a designer and fashion mogul who was assassinated in 1997 by a serial killer. Despite the traumatizing event, the Versace brand continued to operate and still exists today.

Currently, Versace is helmed by Donatella Versace, Gianni’s sister. Donatella’s creative direction is credited as the fuel pushing Versace into the 21st century.

This pair of trunks represents some of Versace’s latest designs. The classic cut features Versace’s iconic Medusa motif complemented by geometric lines along the waistband. The style is mostly made from cotton and elastane, giving wearers a comfortable fit with just enough stretch.

At $195, Versace’s Greca Border Trunks are the eighth-most expensive underwear on this list.

After the death of Gianni Versace, the designer’s work was featured at the Metropolitan Museum of Art in NYC. The posthumous show celebrated Gianni’s masterful design and set the stage for Donatella’s take-over of the brand’s creative direction. 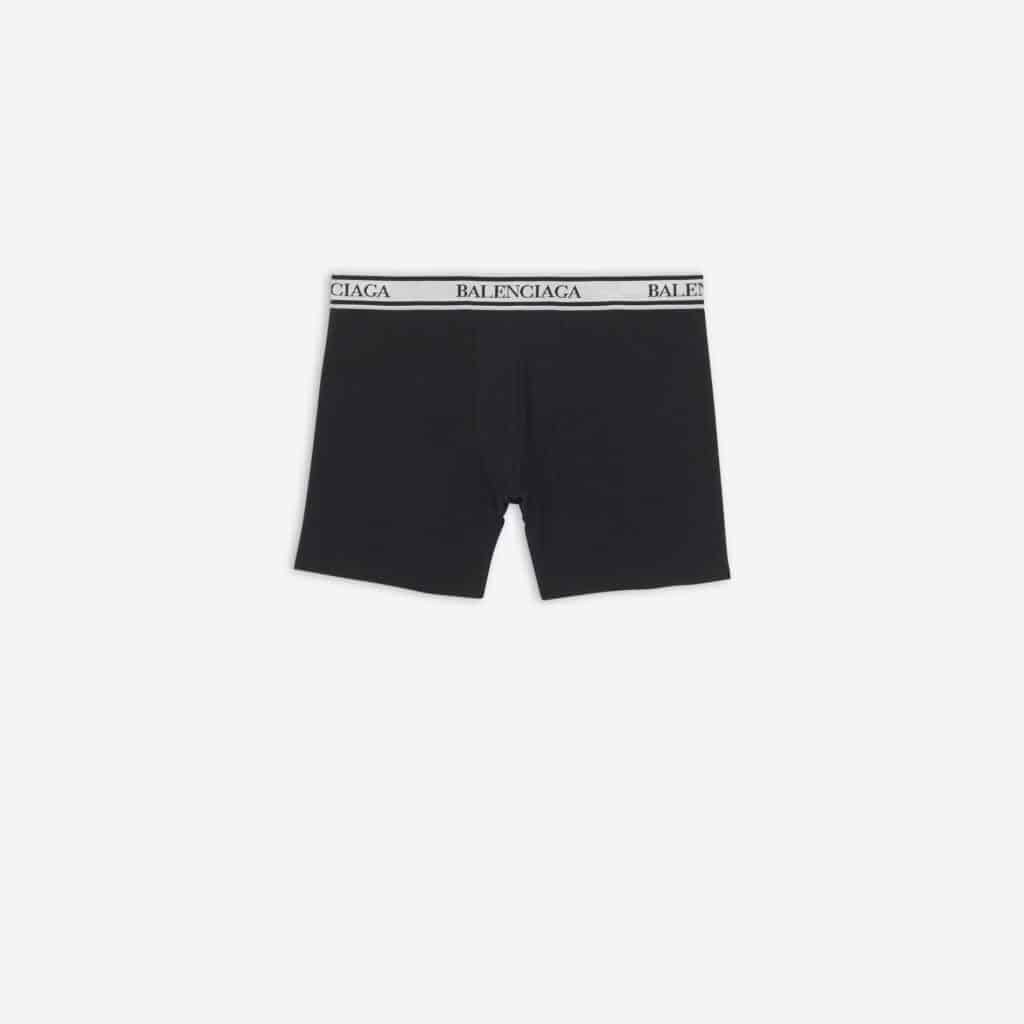 Balenciaga is named after its founder, Cristóbal Balenciaga. Cristóbal was born on January 21, 1895 in Spain. After beginning his studies in dressmaking at the young age of 10, the future designer visited France at the age of 15 where he became further inspired by the world of fashion. Back in Spain, Cristóbal became “the leading couturier of Spain.” When the Spanish civil war of 1937 disrupted his business, Cristóbal moved to Paris and continued his work. Cristóbal died several decades later at the age of 77 — but the Balenciaga brand continued to design pricey clothing for luxury buyers.

Today, Balenciaga is known for its forward-thinking and modern styles. These boxer briefs are an example of the brand’s simpler designs, with a standard cut featuring the Balenciaga name on the waistband. The pricey underwear goes for a steep $250 a pop, making them the seventh-most expensive underpants you could actually purchase. 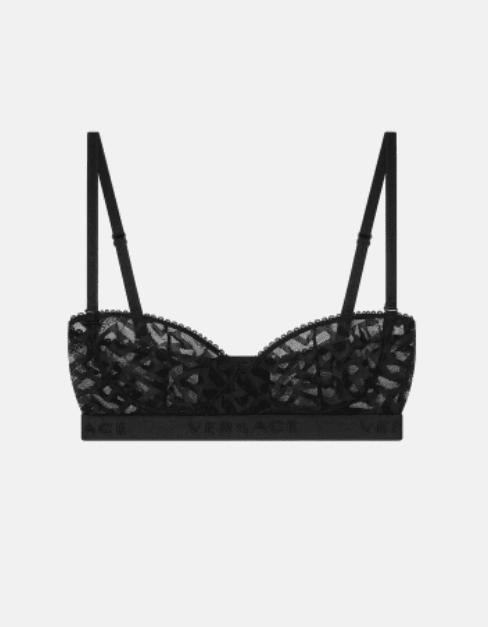 Coming in at number six is another piece by Versace — this time it’s a bralette priced at a hefty $275. The Italian brand says sizing for the product follows “Italian standards” while the design itself is crafted using high-quality materials.

Like other pricey garments, the Versace Greca Tulle Bralette has to be carefully washed. Owners should have it delicately dry cleaned and avoid tumble drying to maintain the intricate tulle design details. The bralette can also be washed by hand using a gentle soap. Overall, this piece is really defined by the word delicate.

Versace says the brand operates across the globe through 200 boutiques and over 1,500 wholesalers. Currently, this particular bralette can be purchased online. 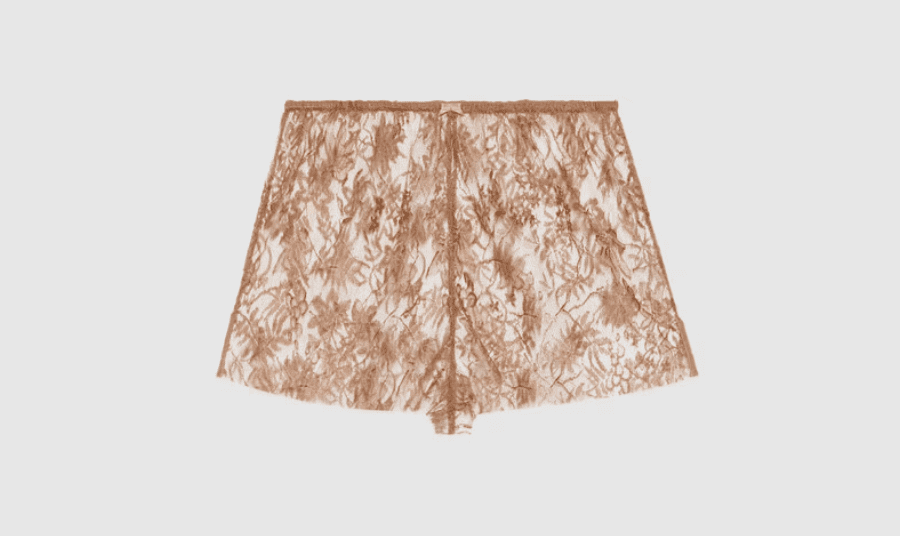 As a way of celebrating Michele’s addition to the Gucci family, the brand re-released a collection of the designer’s original creations. The collection, titled Overture, offered several designs including these lacy floral shorts. The undergarment features delicate floral details in a subtle pink, combining Michele’s love of somewhat playful designs with classy nods to luxury clothing of the past.

Gucci priced this garment at an eye-popping $850 — but that’s actually pretty cheap for the brand. Other Gucci products, like this Crystal jumbo GG cape coat, can go for nearly $10,000.

Alessandro Michele has a design team of about 90 people. Michele and the team are based in Rome, where Michele was born. In an interview with Vogue, the designer said fashion is about more than clothing, “It’s a bigger reflection of history and social change and very powerful things.”

This undergarment was made in Italy, Gucci’s birthplace. 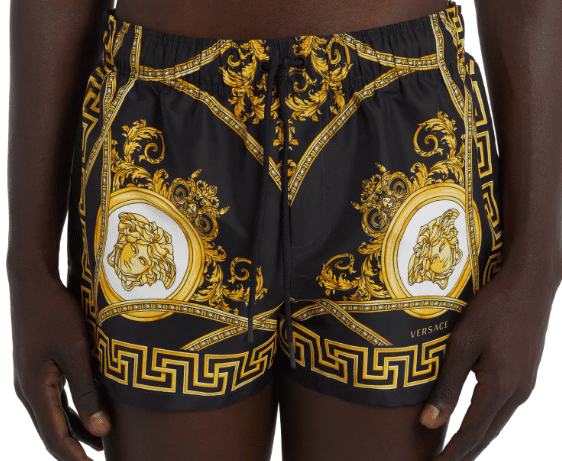 Coming in at number four is another pair of underwear by Versace. This time it’s silk boxers featuring the brand’s Medusa iconography. The underwear is made in Versace’s native Italy, earning it the coveted title of “Italian silk.”

Priced at well over $800, these boxers rank among the most expensive underwear you could ever buy. However, that price tag is pretty low compared to other Versace clothing. This mini metallic dress goes for a steep $5,275 while this Medusa Coat costs a hefty $3,350. Swing for a coveted Versace handbag and you’re looking at another $2,000 — that’s a lot of cash.

Gianni Versace, the founder of the Versace brand, was born in Reggio Calabria, Italy. 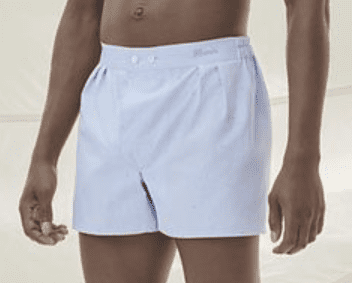 Heading into the top three, luxury brand Hermès pushes prices sky high with its high-end boxers. The pricey underwear costs upwards of $1,000 and features a 100% cotton design presented inside a dedicated holding case. Like other high-end underwear, these boxers are made in Europe — France, to be exact.

These boxers are available in sizes small to XXL and the front waistband features Hermès embroidery.

Hermès traces its roots to the 1830s when Thierry Hermès opened a harness workshop. The business would transform over the years until it became the high-end, luxury goods manufacturer the world knows today.

Approximate Value: $1,600
Designer or Maker: Dior
Item Origin: Italy
Interesting Fact: These briefs can be paired with a matching sports bra, also made by Dior 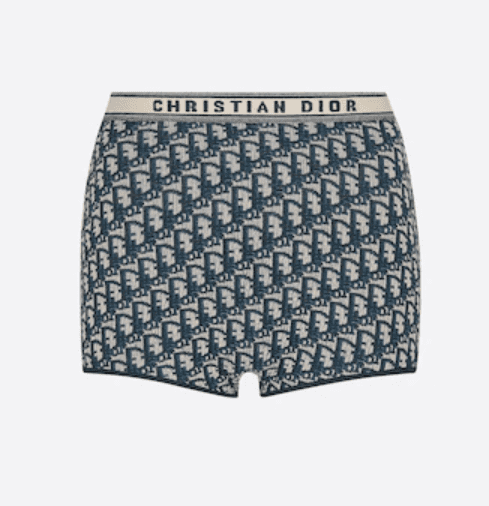 Christian Dior’s pricey briefs cost $1,600, making them the second-most expensive underwear you can actually buy. The expensive design is crafted in Italy and features the “Dior Oblique motif,” an iconic design from the fashion house that first appeared in the late 1960s.

Christian Dior was born in 1905. Before he passed away at the age of 52, Dior developed his iconic brand and produced some of his era’s most iconic fashion — including “the H-line, the A-line, and the Y-line.”

After Christian Dior’s death in 1957, his predecessor was drafted into the French army. The brand weathered this disruption, however, and still remains active today 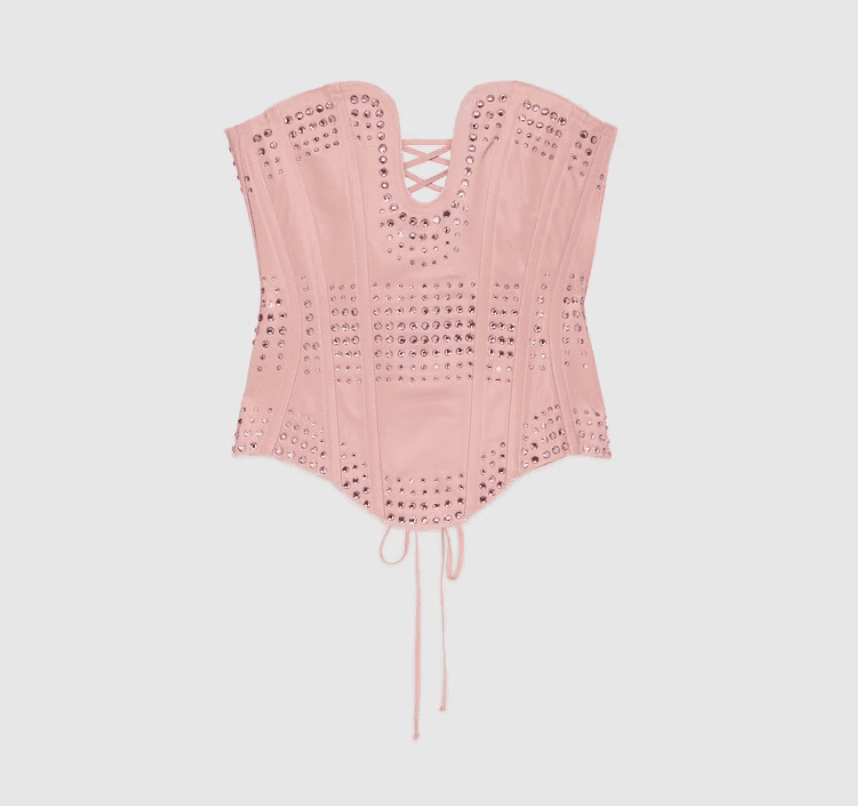 The Gucci silk and crystal corset is the most expensive underwear you can actually buy.

Coming in at nearly $4,000, Gucci’s silk and crystal corset is easily the priciest undergarment you can actually purchase. The wildly expensive design can be worn traditionally (under the clothing for a cinched look), or with a modern flair by setting it over your outfit to show off the crystals.

As with many Gucci products, this undergarment is made in Italy.

The Gucci brand was founded in Italy by Guccio Gucci. In the company’s early years, Gucci was known as a leather-working business — producing luxury leather goods like equestrian equipment. Eventually, the brand expanded to produce clothing and more.

10 Most Expensive Fishing Rods You Can Buy

10 Most Expensive Currencies in the World