How much would you spend on a watch? Ten dollars? A hundred? How about a million.

Well, if you’re in the market for a million-dollar watch, Richard Mille has you covered. The luxury brand was launched in 2001 and has quickly become one of the most expensive and most recognizable names in ultra-expensive watchmaking. The brand’s first watch was priced at a whopping $135,000 and just 17 units were made, setting the stage for exclusive and expensive designs.

Today, Richard Mille watches regularly sell for millions of dollars. Even the brand’s cheapest designs will set you back at least 60 grand — and that would be a bargain.

So just how pricey can these timepieces get? And what’s the most expensive Richard Mille watch ever made? Find out with this top 10 list! 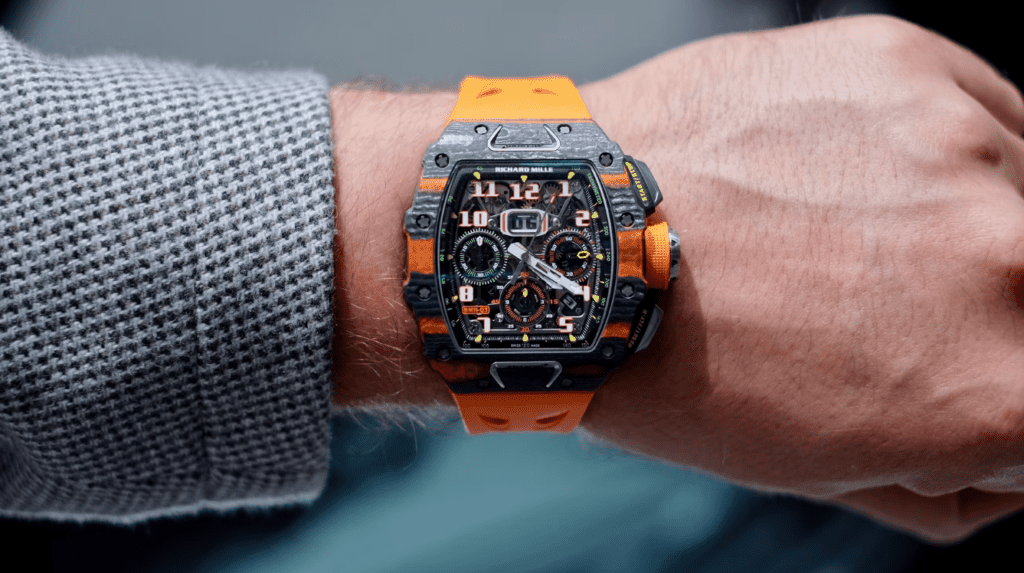 Kicking off our list is Richard Mille’s collaboration with McLaren. The two brands came together to make a wristwatch fit for wealthy sports car drivers featuring insanely specific attention to detail.

Like other RMs, this watch includes a handmade caliber (internal mechanisms) and touches of gold. The limited-edition design was initially made available to McLaren’s most high-profile clients, but this is actually a less rare RM design. Believe it or not, many Richard Mille watch designs are produced fewer than 100 times.

Beyond 18-karat gold, this watch features pricey titanium and Richard Mille’s proprietary casing made of carbon and gold leaf.

Estimated Value: About $522,000
Quantity Made: 30
Design Feature: Alligator leather strap
Interesting Fact: This was RM’s first foray into the combination of art and watchmaking 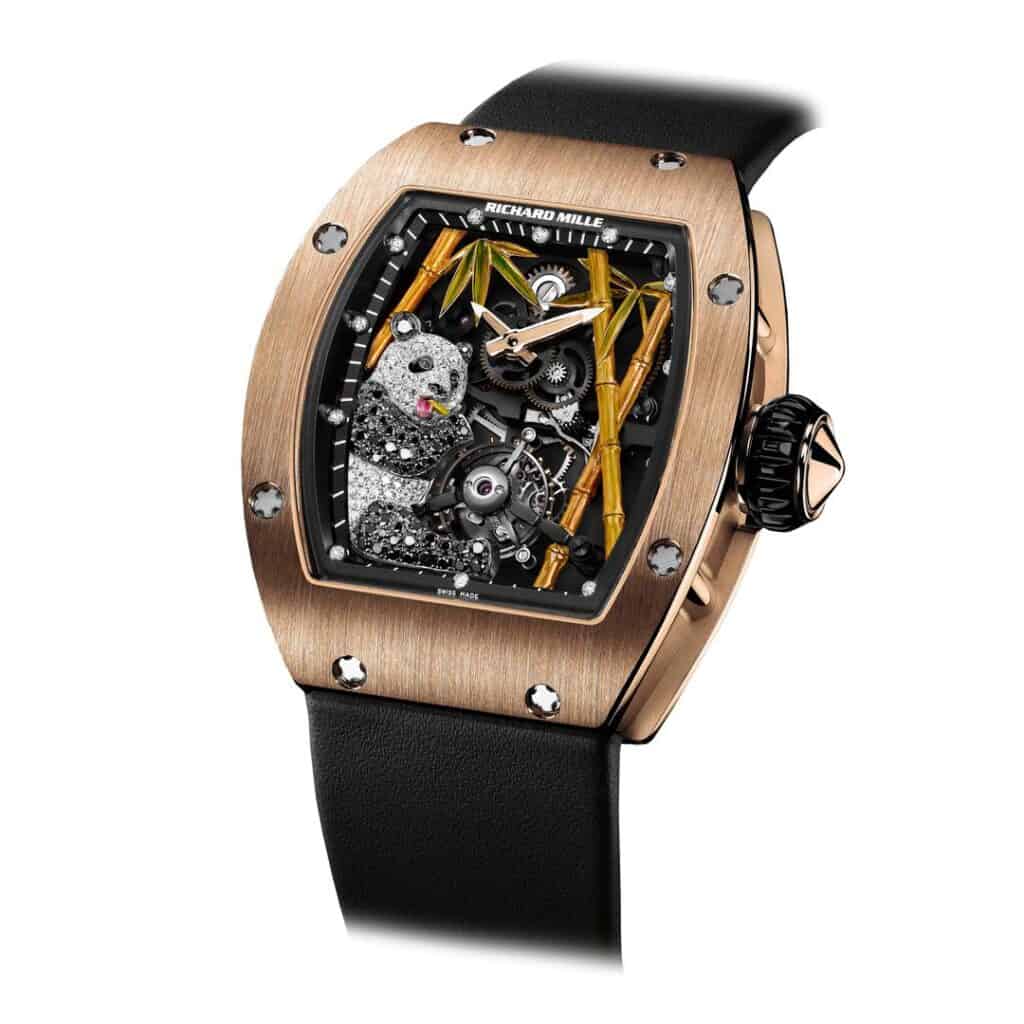 Watchmaking is arguably an art form in and of itself, but Richard Mille’s 2011 Tourbillon Panda really blurred the line between practices. The watch features RM’s expected attention to detail and handmade craftsmanship, but it also features an adorable panda made of diamonds and sapphires.

The design was RM’s first to feature artwork on the dial, setting the stage for some of the brand’s most recognizable future designs.

With rare materials like alligator leather, diamonds, and even black onyx, the Tourbillon Panda is priced just south of half a million dollars.

When launching his brand, Richard Mille says he wanted to “create a new, ultra-high-end luxury segment within the high-end watch business.” 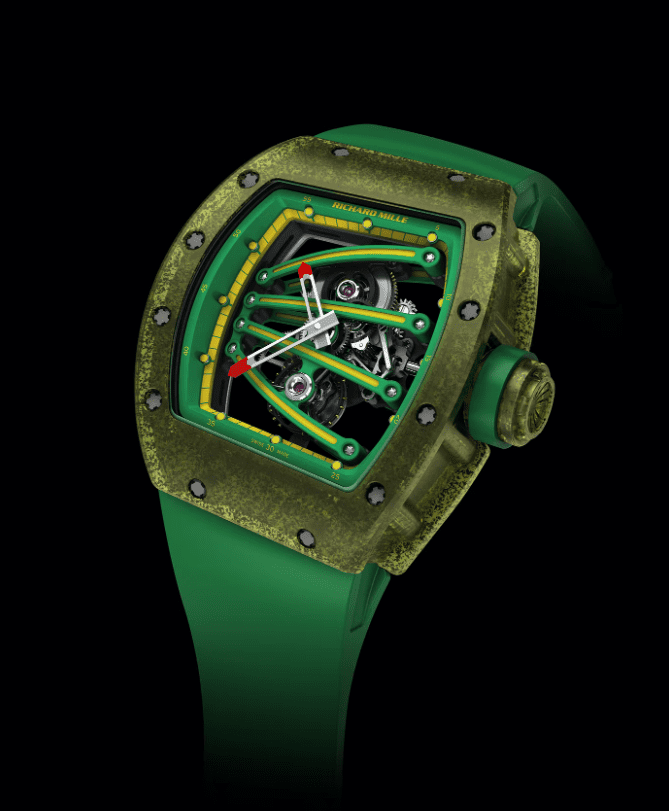 Professional runners know aerodynamic design is vital — and Yohan Blake is no exception. The two-time Olympic gold medalist has an impressive track record, but he doesn’t stop there. In 2013, it was announced that Blake and Richard Mille were releasing a collaborative design made specifically for sprinters.

Blake had been seen wearing an RM watch the year prior when he won silver at a 100-meter race, so the partnership made sense. The new watch would be limited to 50 units, with Blake of course getting one for himself, and each timepiece was priced at a jaw-dropping $620,000.

Yohan Blake is from Jamaica. Like his country’s flag, this watch features yellow and green. 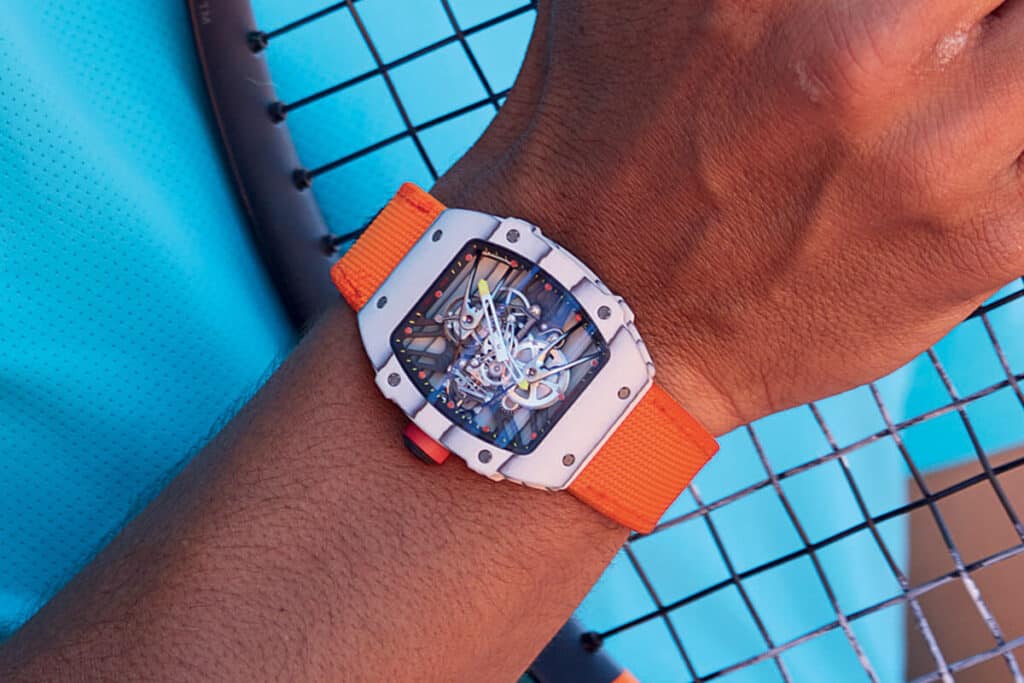 Rafael Nadal is a champion tennis player. As one of the greats, Nadal is no stranger to high-dollar collaborations. His multi-million-dollar net worth grew thanks to sponsorship deals with brands like Nike and Tommy Hilfiger, both of which earned him millions.

In 2015, Nadal expanded his portfolio with a Richard Mille collaboration. The athlete had already worked with RM twice before, but this new partnership marked the duo’s most expensive watch at the time. The $775,000 design was specifically made for intense tennis matches, with features like an ultra-durable design and lightweight footprint.

Rafael Nadal has been sponsored by KIA Motors since the early 2000s.

Estimated Value: About $900,000
Quantity Made: 18
Design Feature: Phoenix artwork on the watch face
Interesting Fact: 18, the number of units made, is reportedly Yeoh’s favorite number 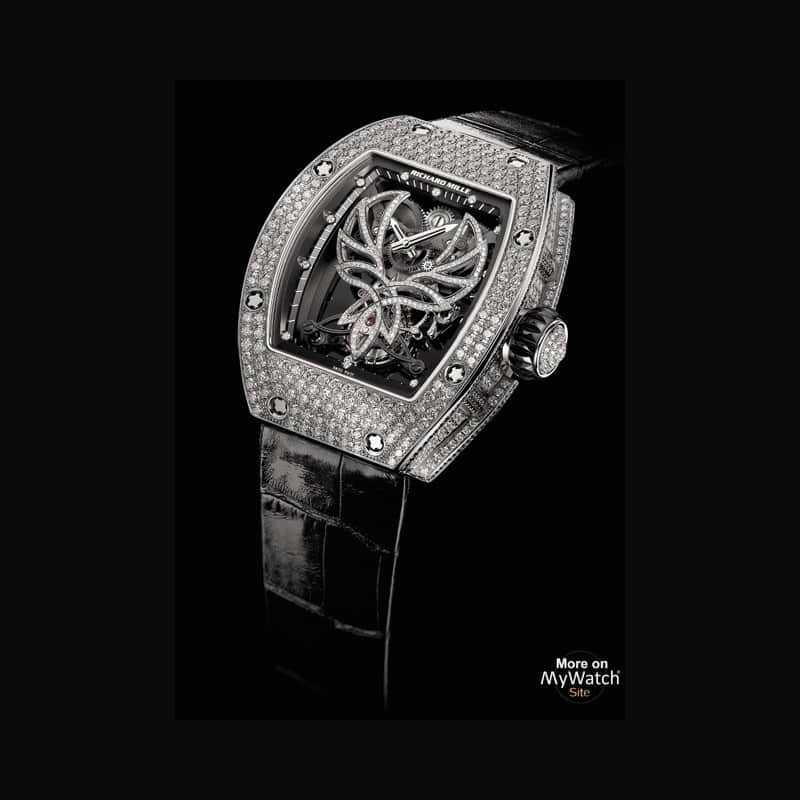 At number six is another collaborative design. This time it’s the RM 051, a timepiece made in partnership with internationally renowned actress Michelle Yeoh. The design features a phoenix made of diamonds. A phoenix can symbolize “grace, feminine beauty and strength.” Other interpretations say a phoenix represents “rebirth, renewal, immortality, healing, and the eternal fire.”

At nearly a million dollars, Michelle Yeoh’s RM 051 is one of the most expensive Richard Mille watches ever made.

Michelle Yeoh was born in Malaysia. The star has credits in a huge range of films, including Crazy Rich Asians, Tomorrow Never Dies, and Kung Fu Panda 2. 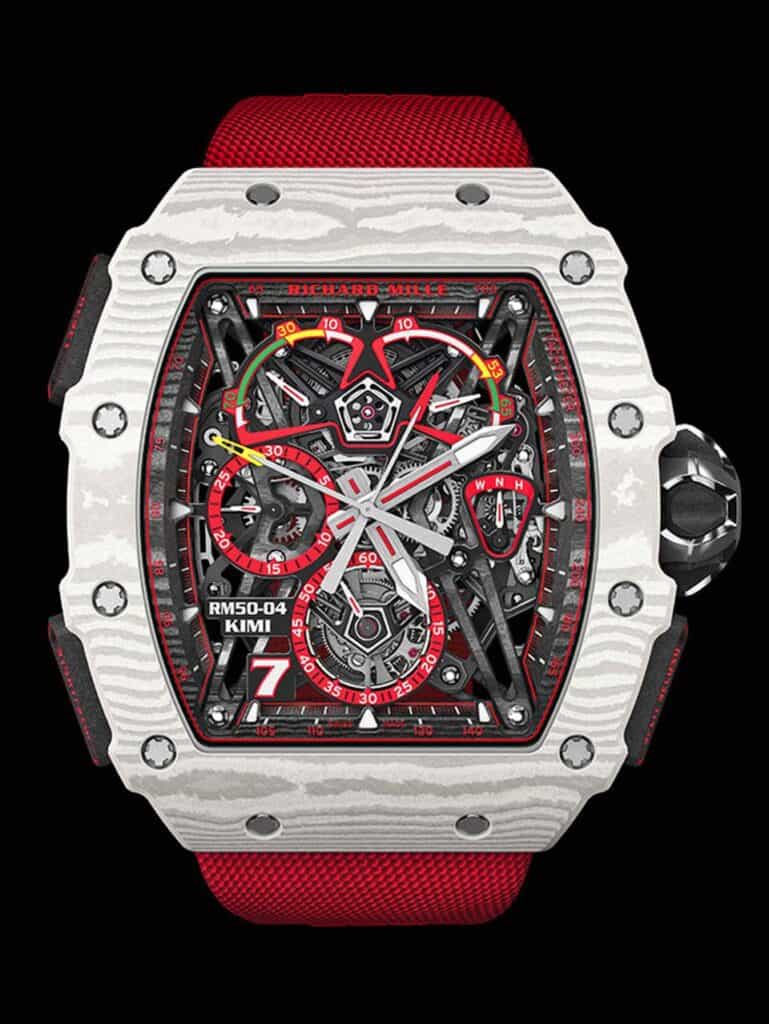 At number five is a watch named after Finland’s “most celebrated F1 driver,” Kimi Räikkönen. The design is extremely durable, with intense impact resistance and highly precise time measurements.

Like other Richard Mille creations, Räikkönen’s wristwatch is exceptionally exclusive. Only 30 units were made, making this one of the rarest and most expensive watches on the planet. It’s also the first watch on this list to cross the million-dollar mark.

This watch features quartz TPT. The durable material is made of more than 600 layers of silicon which are altered and made extremely impact resistant through a unique processing method. 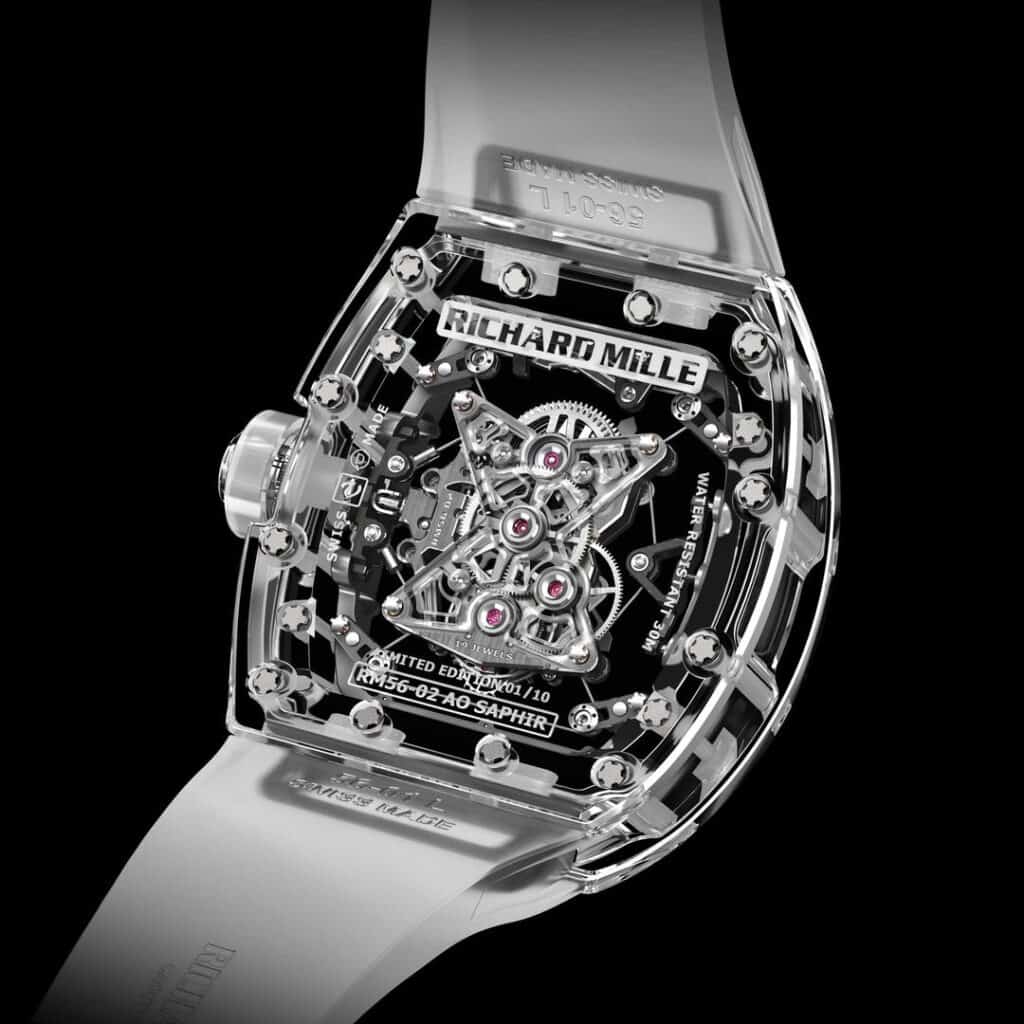 With the RM 56-02, Richard Mille pushed the limits of luxury materials and technical materials. The watch was the second follow-up to RM’s first foray into pure sapphire movements (the technical portions of a watch that make it run).

The updated design maintained the style’s luxury and exclusivity with a limited 10-unit release and a two-point-two-million-dollar price tag.

With a watch this expensive, durability is a must. Richard Mille tried to make sure the design would last by surrounding the sapphire movement with grade 5 titanium. The design was also crafted to allow “an easy visual inspection” in case of malfunctions. 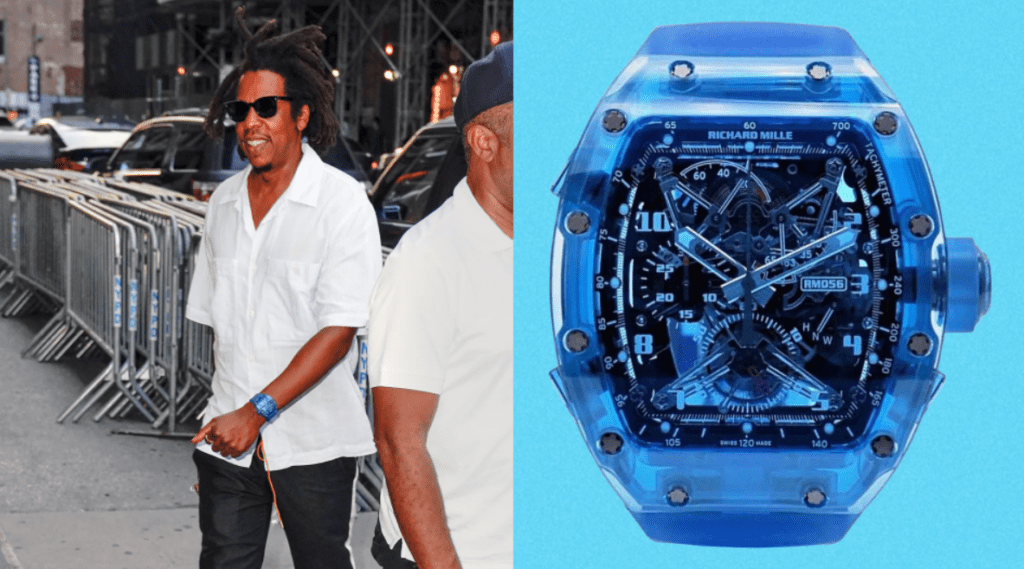 Not much is known about Jay-Z’s custom Richard Mille, but we do know the timepiece is incredibly expensive. Estimates peg the price tag at about $2.5 million.

The one-of-a-kind design took a whopping 3,000 hours to complete, which breaks down to about $830 an hour in case you were wondering.

As a custom design for a high-profile client, Jay-Z’s watch is kind of mysterious. We know the design features a sapphire case, but that’s about it. Jay-Z seems happy with the purchase though. As GQ points out, the artist appeared to twist his wrist toward the camera to subtly show off his timepiece in a 2019 photo. 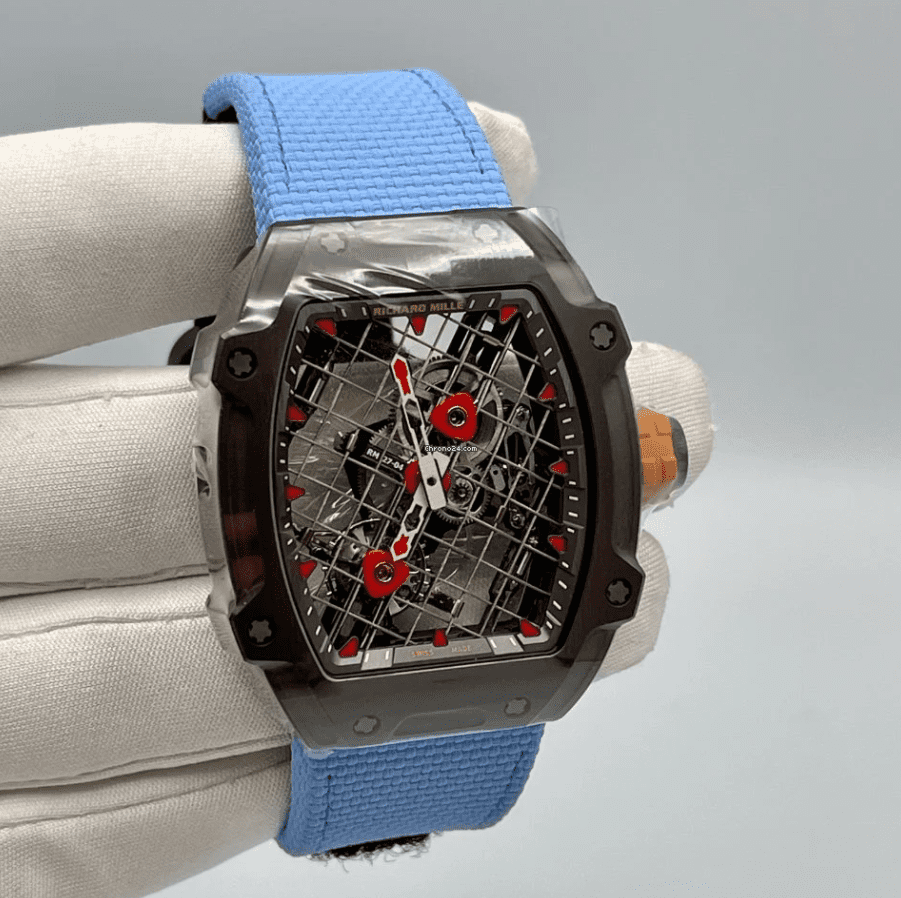 At number two is Rafael Nadal’s fourth collaboration with Richard Mille. The manual-winding watch edges out Jay-Z’s watch by $20,000, making it one of the priciest RM watches money can buy.

Like previous Nadal-RM watches, this timepiece was an ultra-limited creation. Only 50 units were made, instantly boosting their value.

Rafael Nadal is one of the best tennis players of all time. The athlete is called “the king of the French Open,” holding the most Grand Slam titles “on the clay surface at Roland-Garros.” In 2022, the total prize money for winning the French Open was more than $40 million. 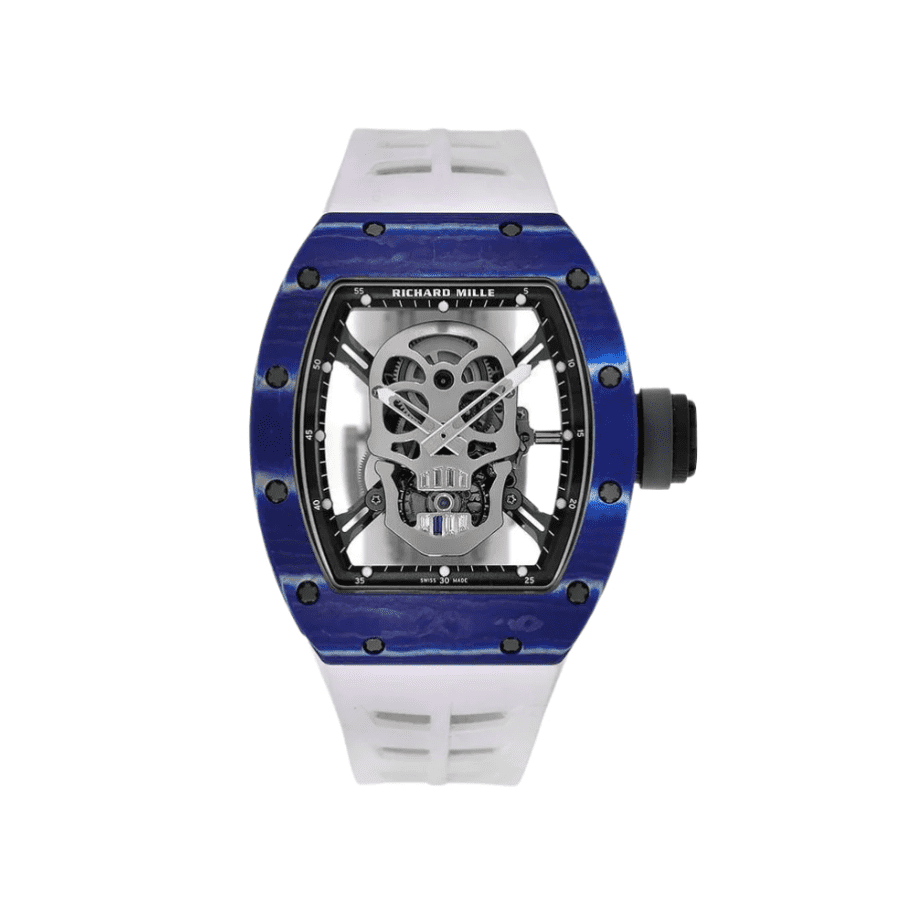 RM 52-01 Blue Sapphire Tourbillon Skull Edition is the most expensive Richard Mille watch ever made.

Priced at more than $2.6 million, Richard Mille’s exclusive Skull Edition sapphire watch is easily one of the most expensive timepieces on the planet. The ultra-expensive design features an eye-catching skull on the watch face and stunning blue sapphire along the casing. Although reports vary, most outlets agree that 10 or fewer examples of this rare design were crafted. Would you buy this watch?

Richard Mille offers more than 80 watch models, including many that sell for more than a million dollars. Richard partnered with Dominique Guenat when the company was just getting started. Richard Mille says the two share a passion for “all things mechanical.”

10 Rarest Cabbage Patch Dolls Ever in the World