8 Most Expensive Pizzas in the World

Americans eat over 3 billion pizzas every year. We may not have invented them, but we definitely re-invented them to suit our needs. Now, we slather that crusty dough in sauce, cheese, sausage, lobster, caviar, and even gold. That may not sound like the kind of pizza you’re used to eating but that’s because you haven’t tried the pizzas on this list.

This list of the 8 most expensive pizzas in the world is divided into two sections: some of the priciest pizzas that are no longer for sale and the most expensive ones that you can still buy.

The Most Expensive Pizzas Ever Sold in History 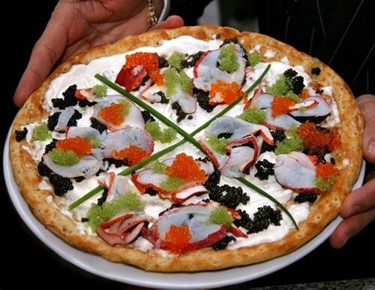 The Bellissima Pizza at Nino’s in Manhattan cost $1,000 due to its high-end toppings. Despite the high price tag, the pizza performed well at the restaurant. A healthy dose of two deluxe caviars topped the pizza, costing hundreds of dollars on its own (if you know the names Beluga and Black Russian Roya Sevruga, you know that this pizza isn’t pulling its punches).

Below the caviar, the pizza was covered in thin-sliced lobster and salmon, chives, and wasabi. For cheese, the pizza uses high-end crème fraiche. Despite being a pizza connoisseur first, Nino Selimaj and Chef Giovani Spatala really hammer home the caviar with their creation, which customers report had a deliciously salty, surprisingly fishy taste.

Beluga caviar is the world’s most expensive variety. It comes from the roe, meaning eggs, of the beluga sturgeon, a fish that swims the salt-water of the Caspian Sea in the Middle East, as well as the Black Sea. A pound of this caviar costs about $4,500, so it should come as no surprise that a spoonful really jacks up the price of the Bellissima Pizza. 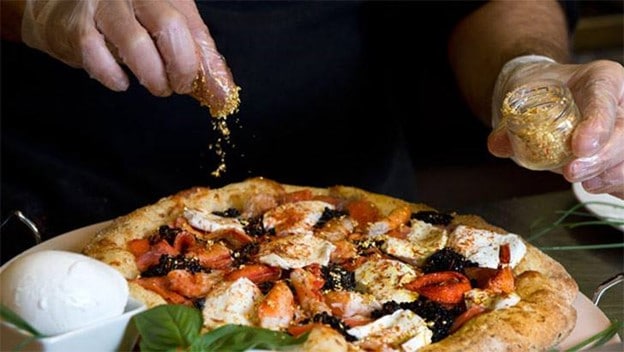 The Pizza Royale 007 was created in 2006 to celebrate the reboot of the James Bond franchise as well as to raise funds for charity. The Glasgow-born chef, Domenico Crolla, created this pizza with the intent of creating the most expensive pizza ever sold. To raise money for the Fred Hollows Foundation in Australia, which works to treat curable blindness in undeveloped countries, he conceived this pizza and put it on eBay.

It was sold to a lawyer named Maurizio Morelli for the equivalent of $2,830. Crolla flew to his home in Rome to make the Pizza Royale 007, topped with a host of decadent toppings that included lobster marinated in cognac, Scottish smoked salmon, edible gold, medallions of venison, and champagne-soaked caviar.

Pizzas made in Italy have many common toppings that Americans are not used to seeing. This pizza, prepared for an Italian and his wife in Rome, showcased this uniqueness by including not only the meats mentioned but also asparagus, chicken, truffle, olive oil, balsamic vinegar, and an Italian mountain egg in the middle. 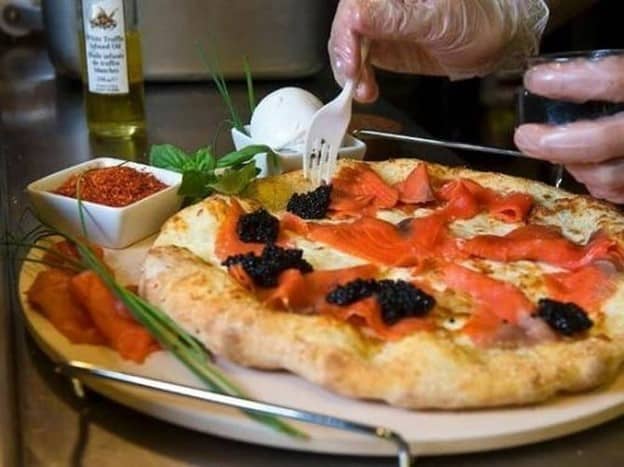 Miss Verdun was the name given to an exorbitantly pricey pizza served at a place called Mazzou in Verdun, Montreal. Unfortunately for those who look at its caviar-flecked body in envy, the restaurant has since closed and taken their lavish pizza creation with them.

The toppings on this pizza were built for luxury: caviar, lobster, white truffles, and even 24-karat gold leaf. Like a pizza featured later on this list, the expense made freshness paramount, which is why chefs from Mazzou actually assembled the pizza in your own home or in any location you picked.

The restaurant even hired a chamber orchestra to accompany your meal. The extravagance was no joke, and we have to wonder if it contributed to the restaurant’s ultimate demise. Another expensive dish on their menu now lost to time was a $333 burger. 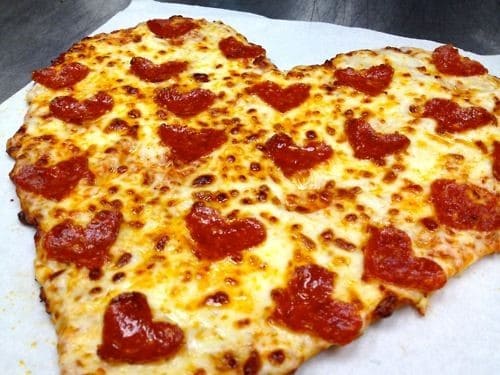 The Pizza for Lovers was made by the owner of Favitta’s Family Pizzeria, Tom Favitta. It’s the most expensive pizza ever sold but one that you can no longer buy, but it’s also a bit of a cheater. The pizza is a normal pepperoni pizza cut in the shape of a heart and would cost about $19 without the extra goodies.

With your purchase, you also got a bottle of champagne worth about $160 and an $8,000 engagement ring. So the restaurant wasn’t really making money on this deal, but the publicity did serve them well for a while as they sold the most expensive commercially available pizza anywhere.

Men spend on average about $225 on Valentine’s Day, while women spend about half that on men. Seeing as how this pizza is also a proposal, that makes things a little different. But still – you’d have to really love pizza to make this one your engagement story.

The Most Expensive Pizzas You Can Still Buy 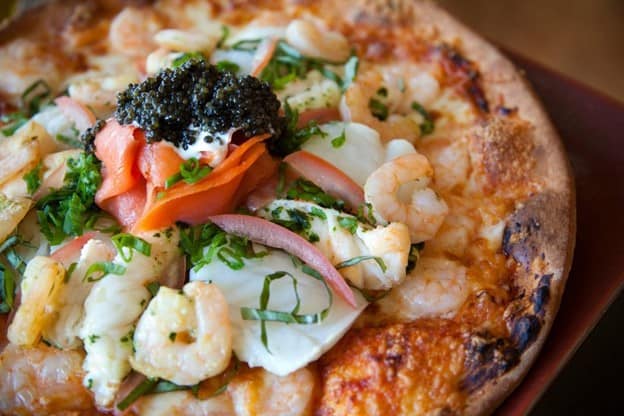 Steveston Pizza Co. in Richmond, British Columbia is an acclaimed pizza deli that prides itself on bizarre pizza toppings. Their pizzas are famous for being stacked vertically, almost like a stacked salad, and often need to be eaten with silverware in hand.

The king of their varied, unique menu is a pizza named C6, which costs $850. It’s slathered in tiger prawns, Russian Osetra caviar, white truffles, smoked steelhead, and lobster ratatouille. Those who eat it basically have to cut and portion out the whole thing like a paella.

Steveston offers other expensive pizzas if you want to experience their decadent, out-there style without breaking the bank. They have a Serpent pizza with shrimp prawns, salmon, and 4 Canadian lobster tails on the menu for $81, as well as a pizza called the Hurricane, which is the same thing but for $40 more, you get twice the lobster. 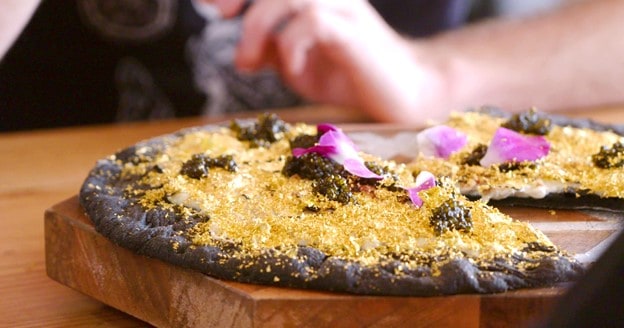 The Industry Kitchen in New York City is known for pushing the boundaries of U.S. pizza creation, both with its weird ingredients and high prices. Their 24K Pizza exemplifies this philosophy with a set of cooking procedures that make this ultra-deluxe Rolls Royce of pizzas cost $2,000.

To start with, the pizza is built on a foundation of bizarre black dough, which has been darkened with rare Indian squid ink. The toppings are crazy: caviar, Stilton cheese (the second most expensive cheese on earth), French foie gras, white truffle, and edible gold leaf.

Squid ink is not actually as rare of an ingredient as it sounds, though normal people will not likely have eaten it. In Mediterranean and Japanese cooking, it can be frequently seen darkening pasta dough, ramen noodles, or even burgers. 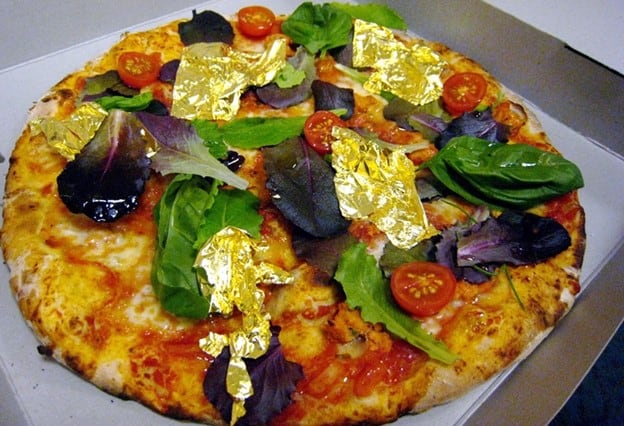 Margo’s Pizzeria held the top spot for the most expensive commercially available pizza before being beaten by our #1 pick a few years ago. The pizza chef (or pizzaiolo) Giovanni Staiano, in conjunction with Margo’s owner, Claude Camilleri, created this pizza with the mindset of luxury first, reality later. Their pizza contains white truffles, the most expensive edible fungus on earth, buffalo mozzarella, a beautiful thin crust, and a sheen of gold leaf made from 24-karat edible gold.

Despite a price tag of $2,400, the restaurant makes no money off this pizza, due to the price of the ingredients.

You may be wondering how gold leaf can be eaten. Gold is a chemically interesting substance in that it is biologically inert. This means that it passes through the human body without being absorbed at all. Gold leaf can be a gimmicky ingredient (even Popeye’s chicken has had gold leaf-fried specials), but 24-karat gold leaf is no joke. 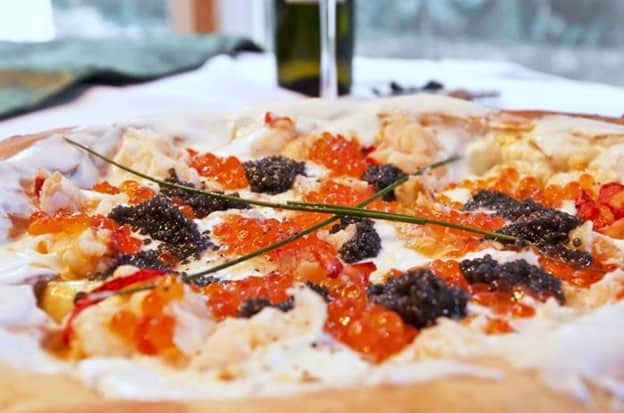 The most expensive pizza is the Louis XIII pizza. This pie, created by renowned chef Renato Viola, takes 72 hours to make because of how many ingredients go into it. By the time it’s ready to assemble, it has to be done so at your house because of the delicacy of the ingredients. A chef, sommelier, and all their ingredients and cutlery show up at your house (assuming you’re in the vicinity of Salerno, Italy) to make your Louis XIII pizza.

So what’s on this magical pizza? Its ingredients include 8 kinds of cheese, including locally sourced organic buffalo mozzarella, Australian pink shrimp sourced from the Murray River, lobster, mantis shrimp, Cilento prawns, and three varieties of rare caviar. Altogether, the king’s pizza will set you back the equivalent of $12,000.

The pizza is served with a glass of Remy Martin Louis XIII Cognac, which retails for about $4,000 a bottle, and Krug Clos du Mesnil Champagne, vintage-dated to 1995, which costs another $1,500 per bottle.

The most expensive pizzas in the world mostly load themselves with the most expensive possible ingredients, some becoming too stacked with lobster, fish, steak, and caviar to even qualify as a pizza by normal standards. Whether salivating over the memory of pizzas no longer with us or planning a trip to the priciest still around, these pizzas are bound to be as delicious as they are expensive.

8 Most Expensive and Luxurious Mattresses You Can Buy

8 of the Rarest Engagement Rings in History