8 Most Expensive Laptops in the World

Believe it or not, computers have roots way back in the 1800s. These early mechanical counting machines were mostly used to solve math problems, so they definitely didn’t work like the computers we have today, but they were an early example of humans using machines to “think” and solve problems.

Eventually, in the late 1960s, scientists and engineers were getting better at making computers that could do more than solve math problems. In fact, one engineer named Douglas Engelbart debuted a computer that let people interact with images on a screen in 1968.

Finally, in 1975, the first commercially available portable computer was released by IBM. Known as the IBM 5100, this device would be part of the personal computer revolution. By the early ‘90s, Apple released its own laptop: the PowerBook 100. The device was a huge success, earning Apple $1 billion in revenue in a single year.

Now laptops are everywhere. Although they’re still a pretty expensive product (with average prices around $600), modern laptops are cheaper compared to models like the PowerBook 100 (which cost a steep $2,300). But that doesn’t mean there aren’t some insanely expensive laptops out there. In fact, some models can cost millions.

Price: At least $1,000
Interesting Feature: Signed by Steve Jobs
Release Year: 1995
Reason for Price: Signed by the founder of Apple 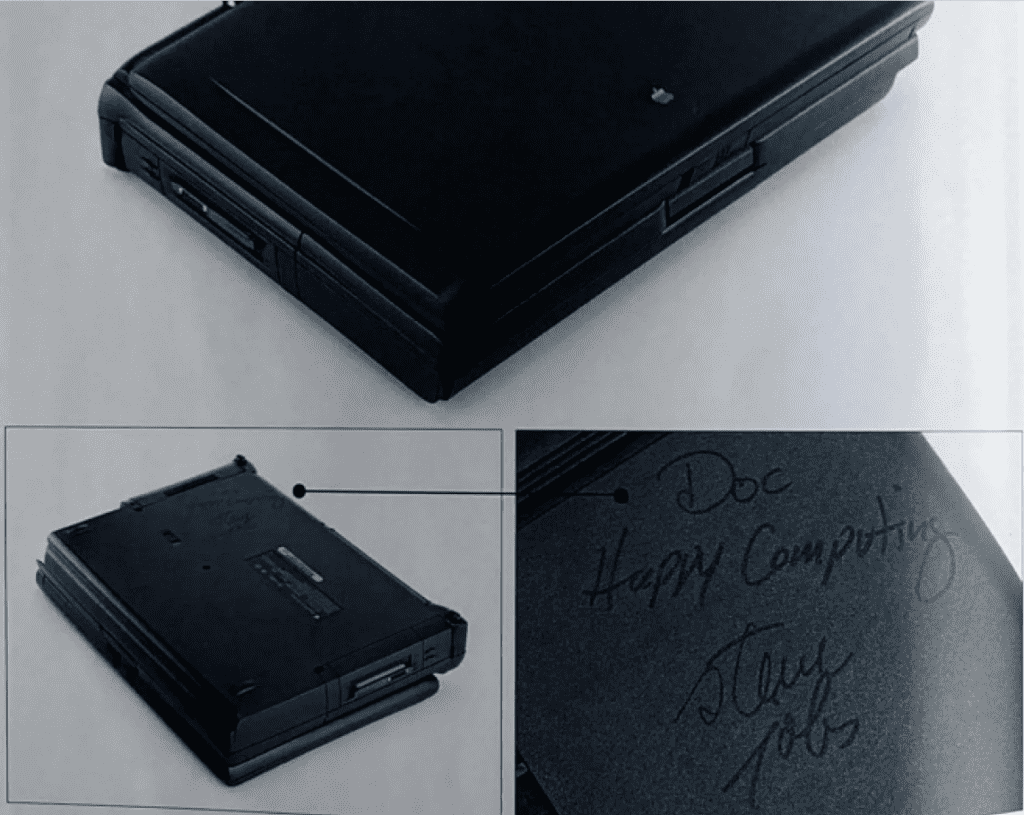 Like many of Apple’s early inventions, the Apple PowerBook is considered a groundbreaking device that brought laptops into the mainstream. This wasn’t Apple’s first portable computer, but it was one of the company’s first major breakthroughs in terms of sales. Apple was reporting more than 100,000 Apple PowerBook sales just a few months after the product line’s initial release — a trend that would generate $1 billion in revenue.

Since it turned out to be such a successful product, Apple made a lot of PowerBooks. As a result, it’s not that hard to find an old one for sale. What is hard, though, is finding one that’s been signed by Steve Jobs, the founder of Apple.

This rare Apple PowerBook features Jobs’ signature alongside a note reading “happy computing.” The message is dedicated to someone named Doc, who reportedly worked at the animation company Pixar.

This rare laptop went up for auction in 2020. It had a starting bid of just $1,000, but it likely sold for much more. However, it’s unclear exactly how much the rare collectible earned. 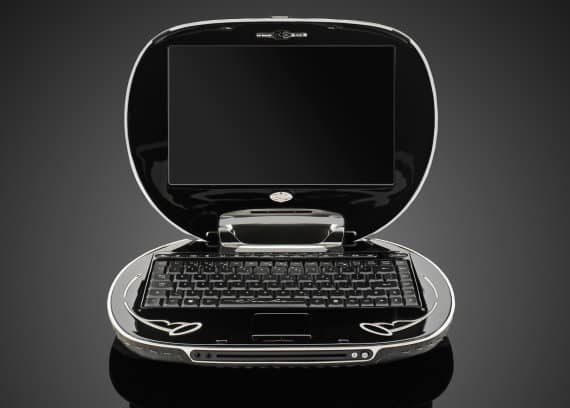 The Bentley Ego doesn’t have much in common with the Apple PowerBook.

While Apple’s line of early laptops was successful and popular, the Bentley Ego was essentially a silly marketing tactic. With a price tag of nearly $20,000, these devices featured details like leather and a white gold frame. While the device did have everything it needed to function like a laptop, it’s clear that Bentley was more interested in making a status symbol than a piece of useful tech.

As one reviewer put it, “The best laptops are all cheaper than this one.”

In case you were wondering: yes, this laptop was made by the same Bentley that makes expensive cars. 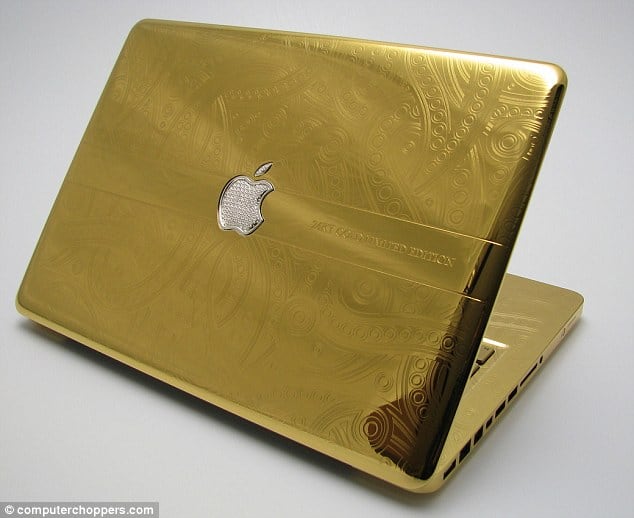 Although Apple was making laptops back in the ‘90s, the company didn’t debut its iconic MacBook until 2006. This new line of portable computers replaced PowerBooks and the iBook (another early Apple laptop).

MacBook Pros are expensive enough on their own, but this 24-carat gold version pushes the price way up. The modified device comes from Computer Choppers and features a steep price tag of $30,000. According to the company, the device includes hand-engraved gold details and a diamond-studded Apple logo. 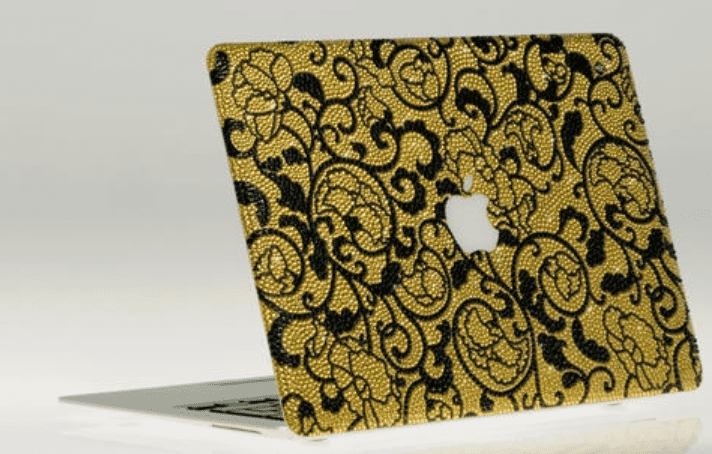 If that last MacBook just isn’t luxurious enough, check out this option from Bling My Thing. The absurdly expensive product features a MacBook covered in 12,000 Swarovski crystals set in 24-carat gold. The design, titled Golden Age, was only replicated 20 times. One of the 20 laptops was put up for sale at Selfridges, a high-end department store in the U.K.

Although some people might love this blinged-out Mac, others aren’t so interested. An article on a tech website called it “offensive” before going on to say “only a triggered gag reflex can properly describe” the author’s reaction. 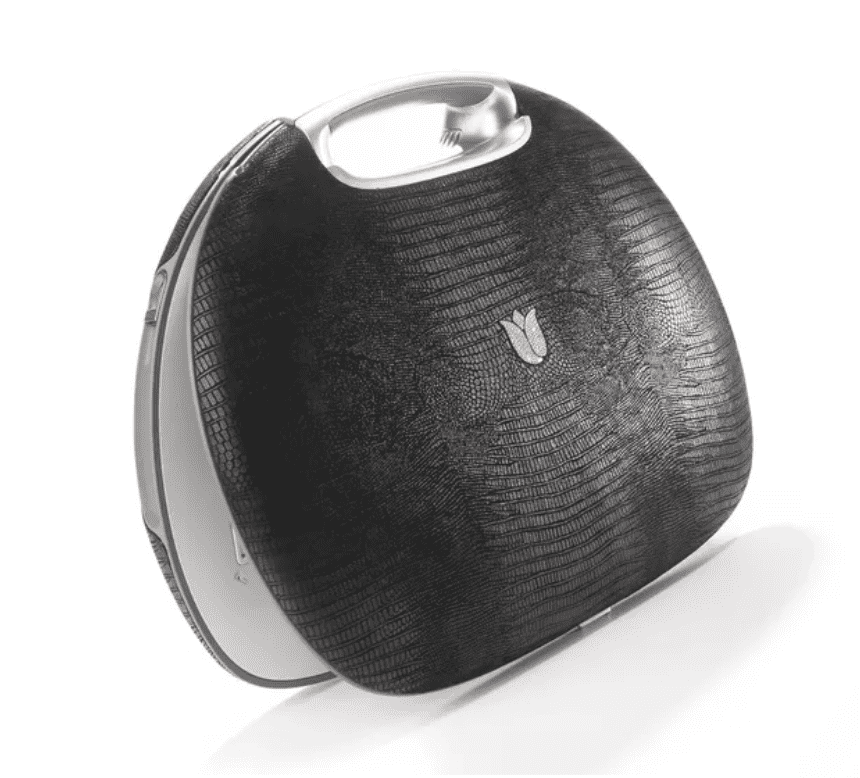 Limited-edition products are usually more expensive than standard releases, but they don’t typically get this expensive. The Rodrigo Otazu laptop is a limited-release device featuring 470 diamonds, optional platinum details, and a 12.1-inch screen. All that can be yours for $350,000.

This bizarrely expensive product came out in 2006. The design was initially introduced at Milan Fashion Week in the spring of that year, but it didn’t hit store shelves until November.

Rodrigo Otazu, the product’s designer, wasn’t new to high-end designs when he made these laptops. In fact, Rodrigo’s jewelry designs have been worn by Lady Gaga, one of the richest celebrities in the world.

If you use CDs, these ultra-expensive laptops might have a one-up on more practical devices like the MacBook Pro. Otazu laptops were made in the early 2000s, a time when CDs were much more common, so they feature CD drives (unlike the modern MacBook Pro). 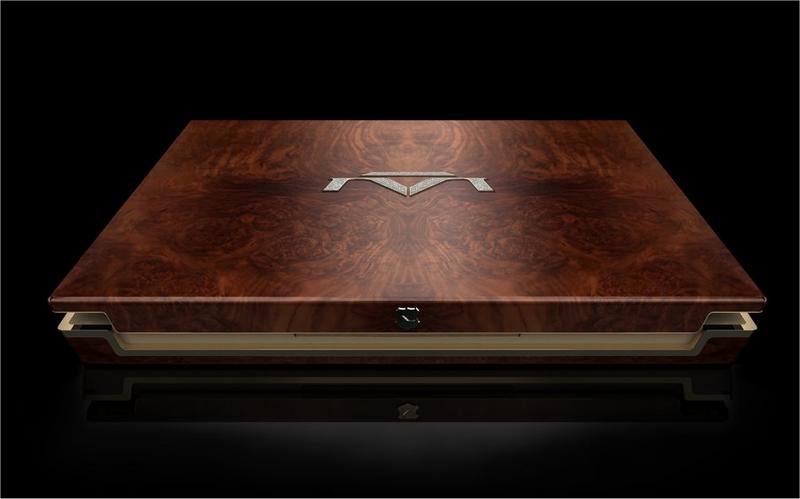 If you hate cleaning laptop screens and you’ve got a million dollars laying around, you might want to check out this computer from Luvaglio. The $1 million device features a built-in screen cleaning system, 128 GB of storage space, and a 17-inch display.

The laptop was created by Luvaglio, a brand known for making overly expensive products. The brand seems to have outdone itself with this launch, though. The laptop even features a rare, colorful diamond set in the power button.

Although this definitely ranks among the most expensive laptops, there seems to be some controversy surrounding the legitimacy of Luvaglio’s design. One report claims the company had no experience designing PCs prior to this laptop’s debut. Another said the company was established just before announcing their expensive product, only adding to the suspicion. 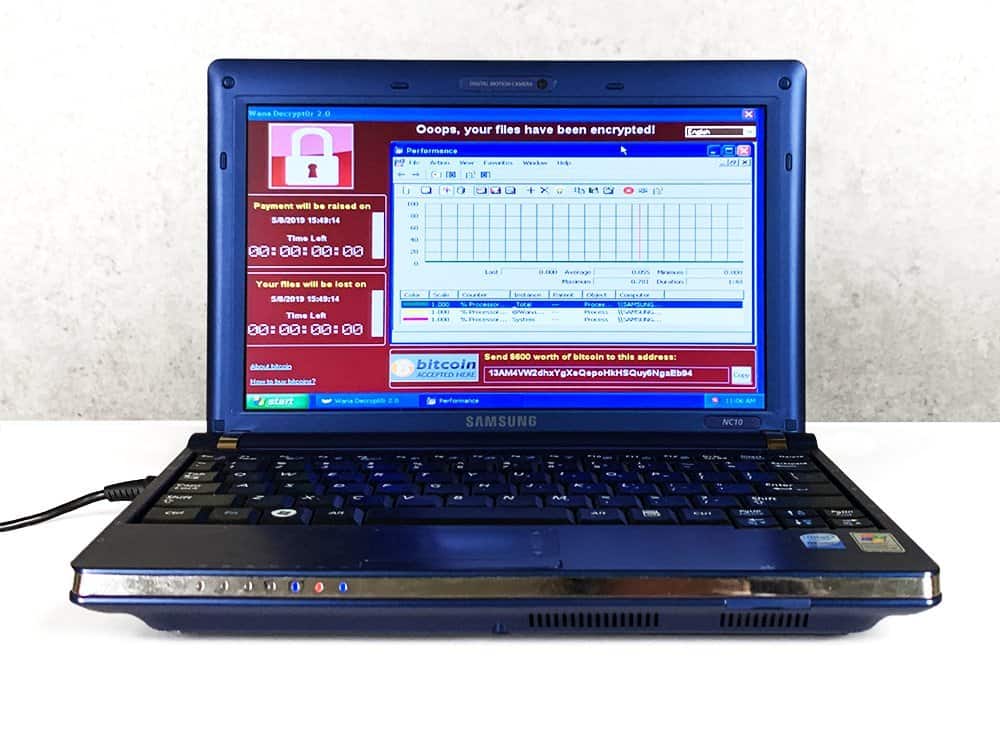 If we’re talking about laptops, we have to talk about viruses. Computer viruses are programs that “infect” laptops, typically with the goal of accessing private information and disrupting the system.

To help spread awareness about the dangers of computer viruses, a cybersecurity firm asked an artist named Guo O Dong to create this laptop. The device, a Samsung Notebook, has been infected with six of the world’s most dangerous computer viruses: WannaCry, BlackEnergy, ILOVEYOU, MyDoom, SoBig, and DarkTequila.

The final piece is titled The Persistence of Chaos. In a statement, the artist said, “We have this fantasy that things that happen in computers can’t actually affect us, but this is absurd. Weaponized viruses…can cause direct harm.”

When this art went up for auction, bidders had to promise that they had “no intention of disseminating any malware.” 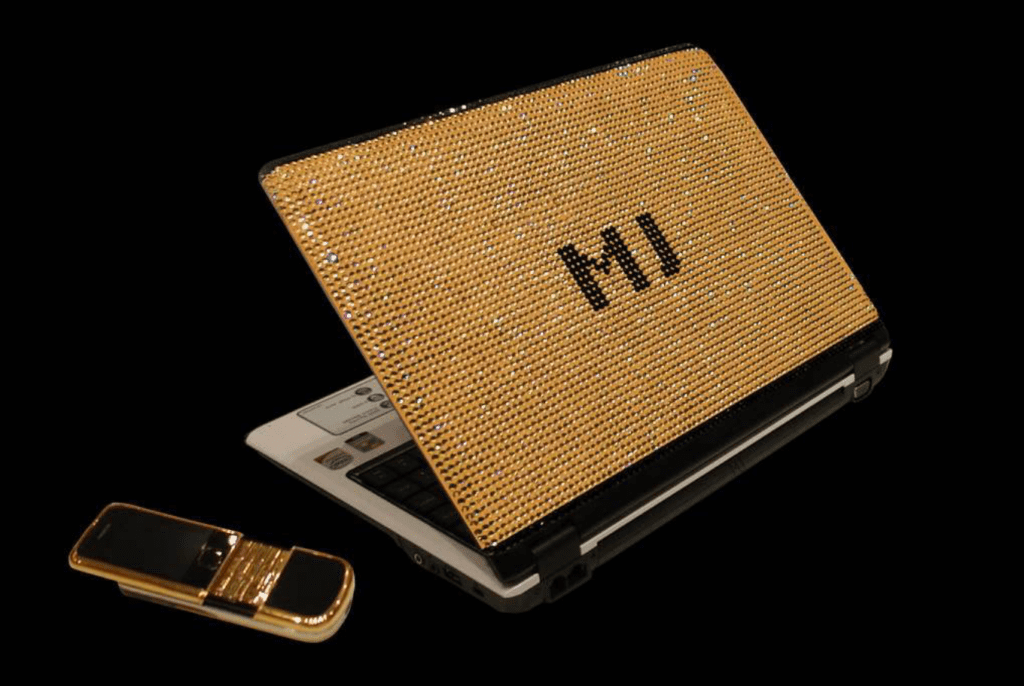 The MJ 777 Edition is the most expensive laptop.

With a price tag of $3.5 million, this is by far the most expensive laptop in the world. The absurdly expensive device features gold-encrusted casing, diamonds, Swarovski crystals, and optional additions like snakeskin or crocodile leather.

If all that isn’t enough to get you interested, the laptop also comes with a solid gold mouse. So maybe it is worth the money…?

This product has two warranties. First, the laptop itself includes a 10-year guarantee so you can avoid any technical problems. Second, all those precious metals and stones are protected by a lifetime jewelry warranty.

8 of the Rarest My Little Ponies Ever Made

8 Most Expensive Things in the World Ever