8 Most Expensive Jeeps Ever Made

Since being founded in 1943, the Jeep brand has based itself on providing sturdy vehicles to its customers. Even the name “jeep” used to refer to new army recruits and newly enlisted military vehicles. One such type of vehicle, a light 4×4 built for the U.S. military, became synonymous with the term during WWII. This vehicle is basically the first commercial SUV, from which the modern Jeep SUVs, crossovers, and other offroad vehicles owe their existence.

Today, Jeeps come in commercial configurations, with many being built for the kind of enthusiast who can afford to spend hundreds of thousands (or millions) on one car. In this list, we review the most expensive Jeeps, both the ones that you can buy as well as the most expensive ever sold.

The Jeep Grand Cherokee L, particularly with the Summit grade, which has all the high-performance bells and whistles, is one of the more expensive Jeeps you can currently buy. This high-end 2021 version of the popular Grand Cherokee line comes with a top price tag of $70,255.

For that money, you get a 3.6 L V6 engine that powers your offroad adventures with 290 hp. The Summit is available in four colors, with Nappa leather upholstery on the interior, second-row seats, and a host of ProTech navigation options. These include a heads-up display, night vision-enabled obstacle detection, digital rearview mirror, and interior rearview camera.

At entry-level, with a rear-drive construction and no bells and whistles, you can own a Jeep Grand Cherokee L for $36,995. That may not be cheap, but it’s not nearly the overhead of the premium version.

The launch edition price of the Jeep Wrangler Unlimited Rubicon 392 was $74,795 early in 2021, making it one of the most expensive Jeeps ever on debut. You get bang for your buck, though, with this soon-to-be award-winning SUV’s 6.4 L Hemi V8 engine under its hood. While this isn’t a requirement for off-road driving, it’s no doubt appreciated by the drivers willing to spend so much.

Unlike the Sandstorm, another Jeep concept car, the Rubicon 392 features ¾-sized doors and a retracting top. This gives its drivers the open-air thrills without quite as much sand.

The next most expensive new Wrangler is the High Altitude 4xe, which started at $55,065 in 2021. You pay extra for that powerhouse engine when you invest in the Rubicon 392. 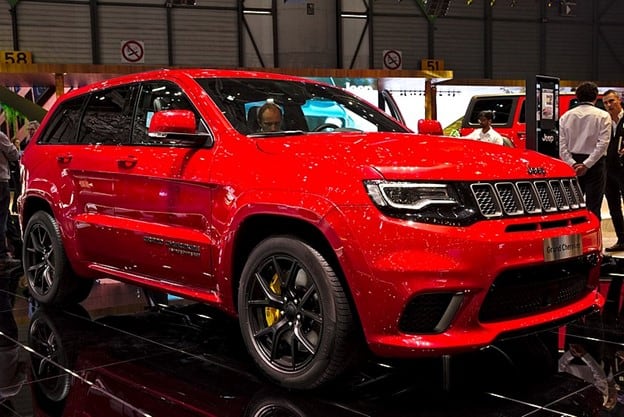 A version of the WK2 Grand Cherokee sells for $88,895. It’s the one that debuted the Trackhawk, Hellcat-powered supercharged Hemi V8 engine, with Street & Racing Technology and all-wheel drive. This monstrous setup provides a staggering 707 hp to the driver of the Grand Cherokee Trackhawk. 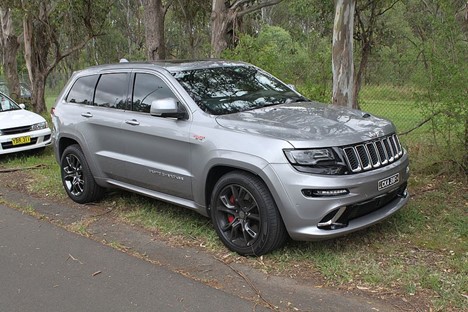 The Jeep Grand Cherokee has been in production since 1992 when it replaced the Jeep Wagoneer. The SRT has become one of its best-selling sub-brands starting in 2012. This SUV is powered by a 6.4 L Hemi V8 engine, which puts out 470 hp. Unlike most SUVs, which are built with a body on a separate frame, the Jeep Grand Cherokee employs a unibody construction, which means that its floor and frame are the same piece.

There are many variations of the Jeep Grand Cherokee SRT, but on the high-end, these cars can go for $130,000, making them the most expensive retail (or non-auction) Jeeps that you can buy.

Unibody chassis are also called “unit-body,” “unitized body,” or “unitary body.” They are lighter but more rigid than vehicles built with a separate frame and body. The original unibody car was the 1922 Lancia Lambda, which was built that way to give it a stiffer structure and lower height. Today, it is the most common way to build a car. 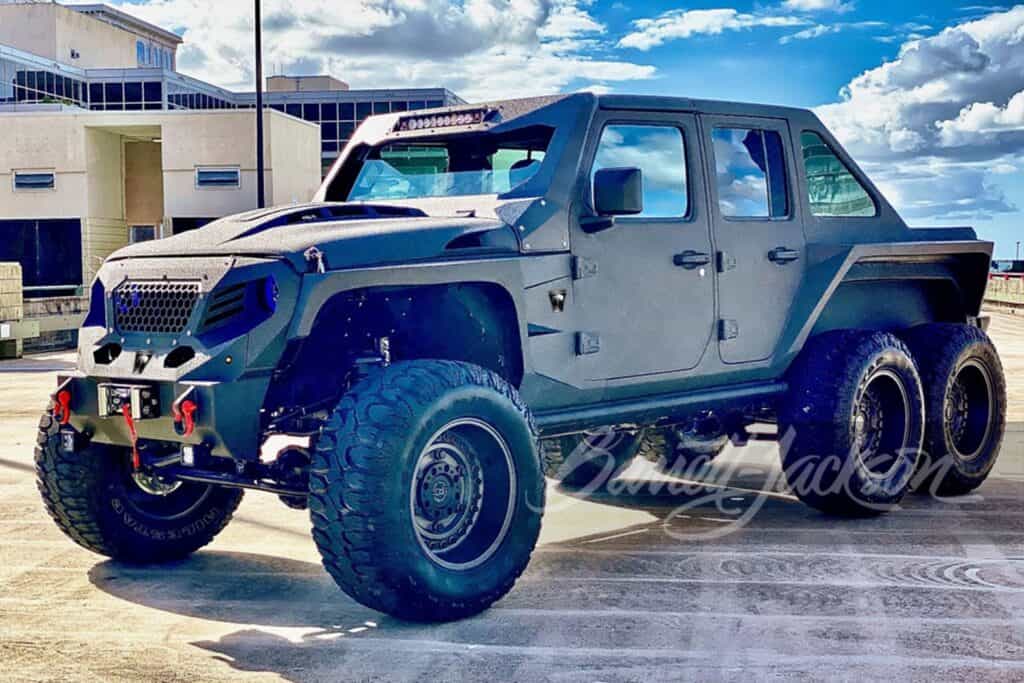 This 2021 Jeep Wrangler Unlimited Custom 6×6 is a rebuilt custom Jeep Wrangler, fitted with a twin-turbo 3 L V6 diesel engine and an 8-speed automatic transmission. It should be no wonder getting a look at it that this monster was nicknamed “Doomsday.”

Its one-piece body, including a 4-foot truck bed, includes a bumper made from quarter-inch steel with a winch that supports up to 9,500 pounds, high-performance, color-changing LED headlights, and a hood made from molded fiberglass. Despite its sturdy exterior, the inside has hand-stitched leather upholstery and other modern conveniences like a high-end audio system with Bluetooth connectivity.

At a Barrett-Jackson auction in 2021, this Jeep Wrangler Unlimited Custom 6×6 sold for $176,000, making it one of the most expensive Jeeps ever.

Doomsday was built to be sturdy. The Jeep’s custom features include windshield armor made from quarter-inch steel, power running boards, a removable T-top, and a 3-part protective Kevlar coating. The hitch in the back under another steel bumper can tow up to 12,000 pounds. 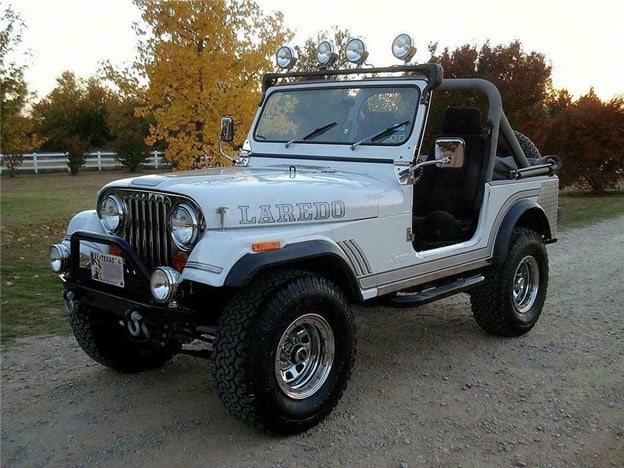 This 1981 Jeep CJ7 Custom SUV has a 4-speed manual transmission and an inline 6-cylinder engine. It was rebuilt and restored body-off. From the original build, the modder added new suspension bushings, HD shackles, body bushings, brake lines, fuel lines, and an upgraded sway bar. The doors are diamond-plate half doors.

The Jeep CJ line is one of its most long-lasting and best-selling. It started in 1944 and wasn’t discontinued until 1986, after selling over 1.5 million units. The CJ-7 Jeep that was the base for this custom SUV was discontinued in favor of the Jeep Wrangler. A similar vehicle called the DJ Dispatcher was unveiled in 1956 and went off in its own design direction, eventually serving as the basis for vehicles in the U.S. Postal Service with its right- and left-hand design. 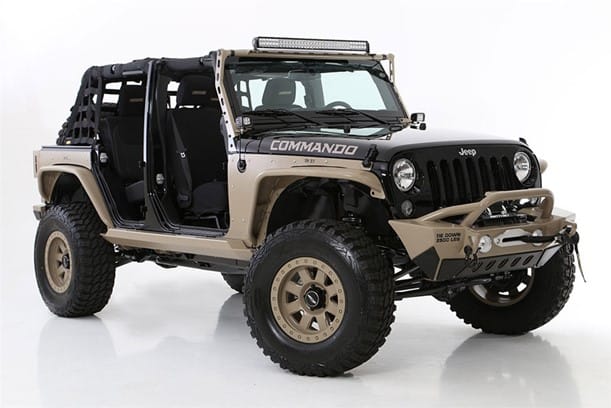 The Jeep Wrangler Unlimited Commando Tactical Edition was sold in Palm Beach in 2015 at a Barrett-Jackson auction for $225,000. This makes it nearly the most expensive Jeep ever sold. It was inspired by the Hendrick Commando, a tactical Jeep first shown at the Easter Jeep Safari in 2015.

Jeep worked with Hendrick Dynamics, the company behind that car, to create the Commando edition, which is built to withstand a variety of terrains and situations. The car is so sturdy that it was fielded overseas for special ops units.

The Hendrick Commando Jeep was used in combat situations by the U.S. military starting in 1989, in Operation Just Cause (you may recognize the name from the popular video game series). This Jeep Wrangler carries on the tradition of that vehicle. 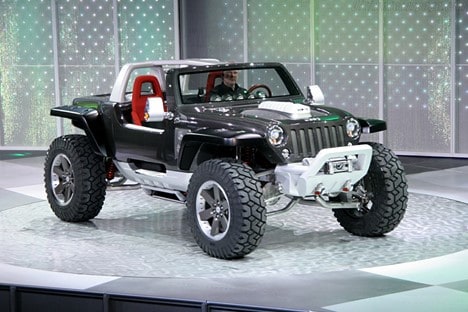 The most expensive Jeep is the Jeep Hurricane. This one-of-a-kind prototype vehicle was designed by Aaron Pizzuti and released in 2005 at the North American International Auto Show. The car is powered by twin 5.7 L Hemi V8 engines. Each of them produces 335 hp, giving the Jeep Hurricane a massive total output of 670 hp.

With automatic cylinder deactivation, the Jeep Hurricane can use as many or as few of its cylinders as it needs. The body of the jeep is a single piece made from structural carbon fiber, designed to be lightweight and durable. This concept car cost its buyer $2 million.

There are many reasons that the Jeep Hurricane was a concept car that Jeep fans wanted to go into main production. One of them was Chrysler’s patented four-wheel independent steering system. This allowed the Jeep Hurricane’s driver to independently control each of the Jeep’s wheels. This enabled experienced drivers to do a fancy offroad move called the “crab-steer,” which allows the Jeep to move laterally to each side while still facing forward.

The Jeep has been giving offroad aficionados a sturdy vehicle of choice for decades. While the cars on this list may not be ideal for affordability, they have the durability and luxury features that justify being the most expensive Jeeps in the world.

8 Most Expensive Mountain Bikes in the Market Today