8 Most Expensive Ice Creams You Can Buy

The most expensive ice cream in the world is made from decadent ingredients but can also come with a bonus or two. Restaurants run promotions that include anything from jewelry to plane tickets to inflate the price of their ice cream. As romance, recreation, or just plain indulgence, ice cream can cost a pretty penny on the best of days. On this list, you’ll need millions of them.

Read on to learn more about the 8 most expensive ice creams in the world. 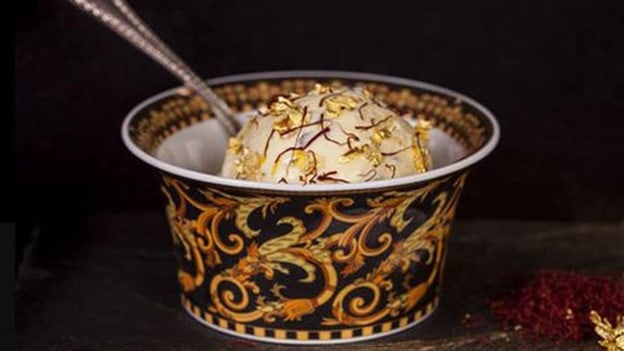 Scoopi Café in Dubai sells an expensive sundae that costs Rs 60,943 per scoop (the equivalent of $817). The Black Diamond ice cream is made of edible sheer yellow metal, which mirrors the gold-obsessed United Arab Emirates.

Rather than being premade and stored, the Black Diamond ice cream is frozen on-site using liquid nitrogen as soon as it is made. The costliest saffron from Iran, vanilla from Madagascar, black truffle from Italy, and 23-karat gold flakes top this decadent dessert.

Like many ice cream desserts on this list, buying this one comes with a bonus. The handcrafted golden Versace bowl and silver spoon that you use to eat this ice cream is something you can take home with you. 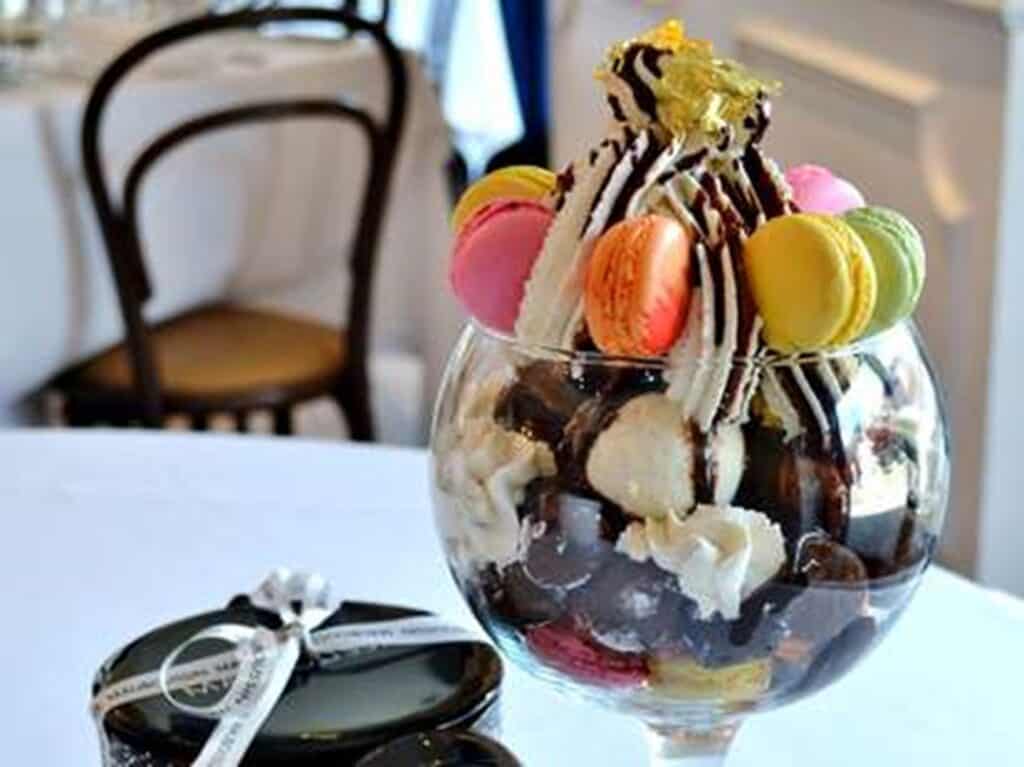 Bagatelle in New York City sells a sundae called the Mauboussin Mega Sundae for $1,000. It may look like a mess of vanilla ice cream, macaroons, chocolate brownie balls, and whipped cream. But a few things push this sundae’s value over the top.

First is the sorbet made from Dom Perignon Rose. Then there’s the decadent chocolate truffles, chocolate vodka sauce, and edible gold leaf gilding.

The sundae also comes with a decorative ring made of black steel and white gold. This ring was made as a Bagatelle exclusive so it may be the real prize, in a sense. The restaurant calls this ring, “Moi non plus/Toi non plus,” which is French for, “Me neither/You neither.” 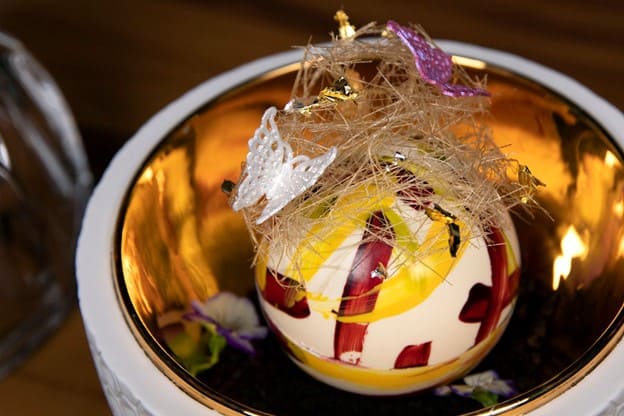 The pastry chef Rosario Wakabayashi created this decadent dessert for the Baccarat Hotel in New York City. The ice cream is made from imported Madagascar vanilla beans of the highest quality, 3g of luxurious black truffle, Madagascar-imported Manjari dark chocolate, and nibs of Valrhona Gold.

The ice cream is contained in an edible shell that you have to break with a spoon. It is served in a clear crystal bowl that costs $1,200 if you want to have one of your own.

The ice cream itself is not only decadent but also has a sauce made from hibiscus, champagne, and citrus meringue. The dessert is topped with edible fondant icing molded into shimmering butterflies. 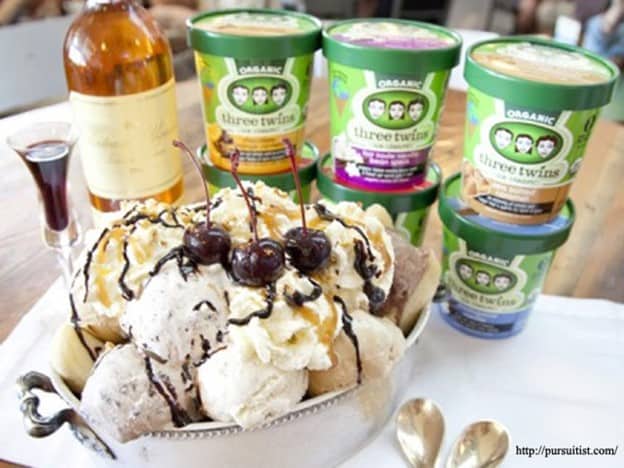 The Three Twins Ice Cream Company (remember the name – we’ll be getting to them again later) serves an expensive, $3,333 ice cream sundae to celebrate returning to their old location on Fillmore Street. This dessert is a banana split that includes three syrups made from expensive dessert wines. These include German Trockenbeerenauslese, 1960s vintage port, and a Chateau D’Yquem.

This ice cream sundae is served with a special ice cream spoon from the 1850s. As an added luxury, if you call ahead before ordering this sundae, Three Twins will set up a local cellist to play while you eat. You know, if you’re into that during ice cream time. 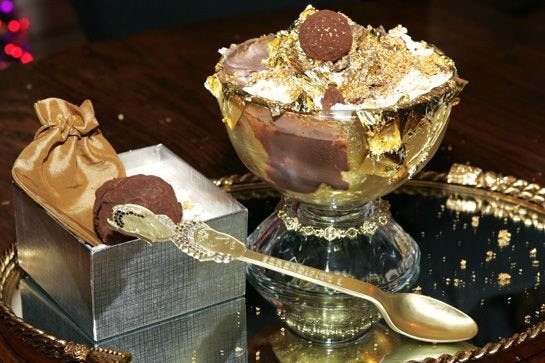 In 2007, the Frrrozen Haute Chocolate Ice Cream Sundae sold by Serendipity 3 in New York won the Guinness World Record for the most expensive dessert in the world. As you can see, some have eclipsed it since then. But this East 60th Street restaurant prides itself on serving insanely expensive, delicious ice cream.

This ice cream was made from 28 cocoas, including the most expensive in the world. It’s topped with 5g of 24-karat edible gold leaf and $250 worth of La Madeline au Truffle.

The ice cream is served in an imported Swiss gold goblet lined with white diamonds. The gold spoon you eat the dessert with is decorated in a classy 20s style and lined with white and brown diamonds. And you’re allowed to take it home with you. So they do give you a little extra to get that price up. But don’t they all. 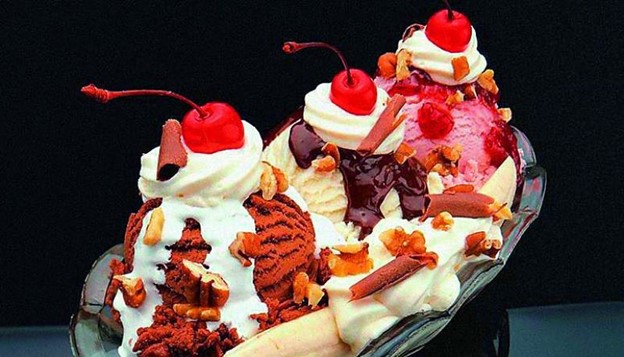 The Absurdity Sundae costs $60,000 through the Three Twin Ice Cream Company, making it one of the most expensive ice creams in the world. This sundae comes with a unique prize in the cost – two tickets to Tanzania where Neal Gottlieb will fly you out to enjoy a bit of absurdity.

Mount Kilimanjaro, the tallest mountain in Africa, has a bit of ice shorn off for this incredible treat. The money for this dessert goes to a foundation devoted to preserving the African climatological environment. And giving you outrageous bragging rights.

Your $60,000 ice cream comes with the plane tickets, a guided tour up Kilimanjaro, and an all-important t-shirt. It can also be purchased as a romantic getaway for two for the bargain price (?) of $85,000. 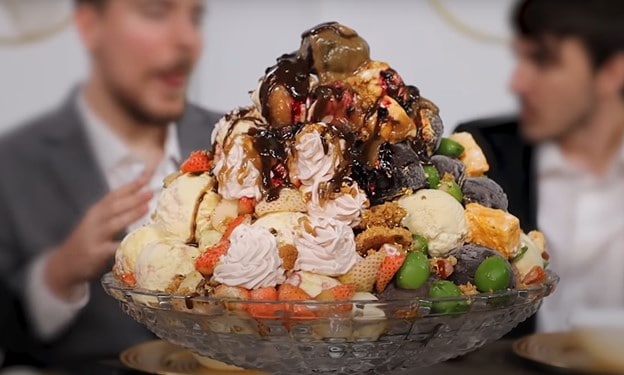 The YouTuber Jimmy Donaldson aka Mr. Beast is known for lavishly overindulging himself and his friends on the world’s most expensive food. In 2021, he spent $100,000 to treat his friends to an incredible ice cream sundae with an unbelievable list of ingredients.

First are the ice cream balls themselves, each of which costs $100. Then there’s the South American chocolate from bars that are $500 apiece, Japanese strawberries glazed in century-old grape juice that is $20,000 per bottle, candied peaches that are $500 each, wild huckleberry sauce that’s $50 a spoon, $3,000 worth of caramel sauce, and $45,000 worth of butterscotch made from 50-year-old apples.

Due to the extravagance of the dessert, Mr. Beast left a $20,000 tip. Suffice it to say that the YouTube business is doing well these days. 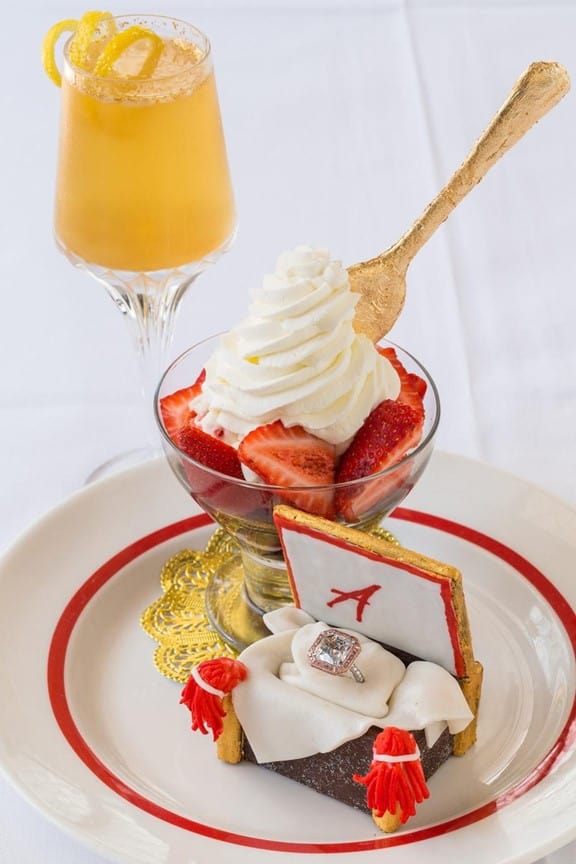 In partnership with MS Rau Antiques, Arnaud’s takes luxury to a whole new level with the Strawberries Arnaud, a dessert with layers of Brocato’s French vanilla ice cream, strawberries, whipped cream, and a Port Wine Sauce. It’s on the menu for $9.

But by ordering it as a special Valentine’s Day proposal special, the price rises to $9.85 million due to the inclusion of a 10.06-carat royal blue diamond ring and 24-karat edible gold leaf. We realize that this could be considered cheating since the ice cream itself only costs $9. But it’s ice cream, you can order it, you can’t buy the ring by itself, and it costs $10 million so we’re including it.

This Strawberries Arnaud tradition comes from a special gift presented by Archie Casbarian to an esteemed guest at Arnaud’s in the 1980s. He bought a luxurious diamond bracelet, laid it over the wrinkly neck of an actual turkey, and had it run into the dining room to give it to his guest.

The world’s most expensive ice cream is often prepared with outrageously rare ingredients, from black truffle to edible gold leaf. It can also be supplemented with gifts and offers to artificially increase the price, sometimes to hundreds of thousands or even millions of dollars.

You may not be able to afford the most luxurious ice cream on earth, but you can take comfort from the fact that it rarely lasts long. The restaurants who make these offers often cycle through them after the fad passes. You better get while the getting’s good if you have a huge sweet tooth. And a few hundred thousand lying around.

8 of the Most Expensive Birthstones Ever

Learn About the 8 Most Expensive Diamond Cuts that Exist