8 Most Expensive Houses in Georgia 2022

Georgia was founded in 1732, several decades before the U.S. was born. In those years, the colony was bigger and took up parts of modern-day Mississippi and Alabama.

Before the American colonies declared independence from Britain, Georgia was ruled by a Board of Trustees based in England. The colony itself had no governing body within its territory, which was very unique compared to the other original colonies.

Although Georgians generally sympathized with the rule of Britain, the colony slowly began to resist the Crown. Eventually, Georgia established a new government to oppose British rule in 1775 before becoming the fourth state to enter the Union in 1788.

Learn more about the most expensive houses in Georgia with this top eight list! 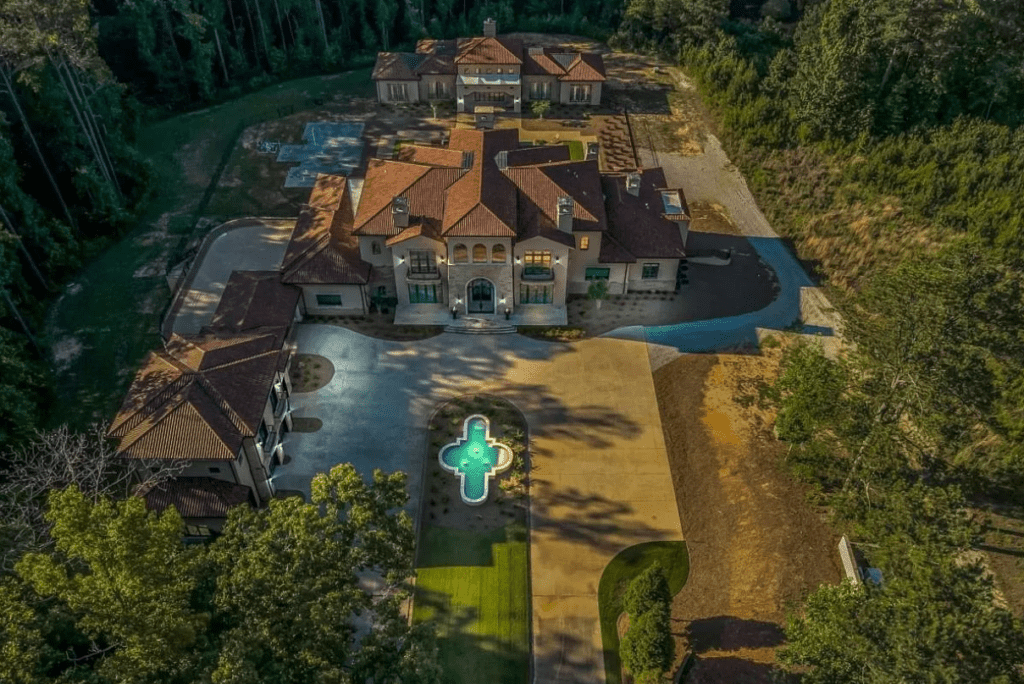 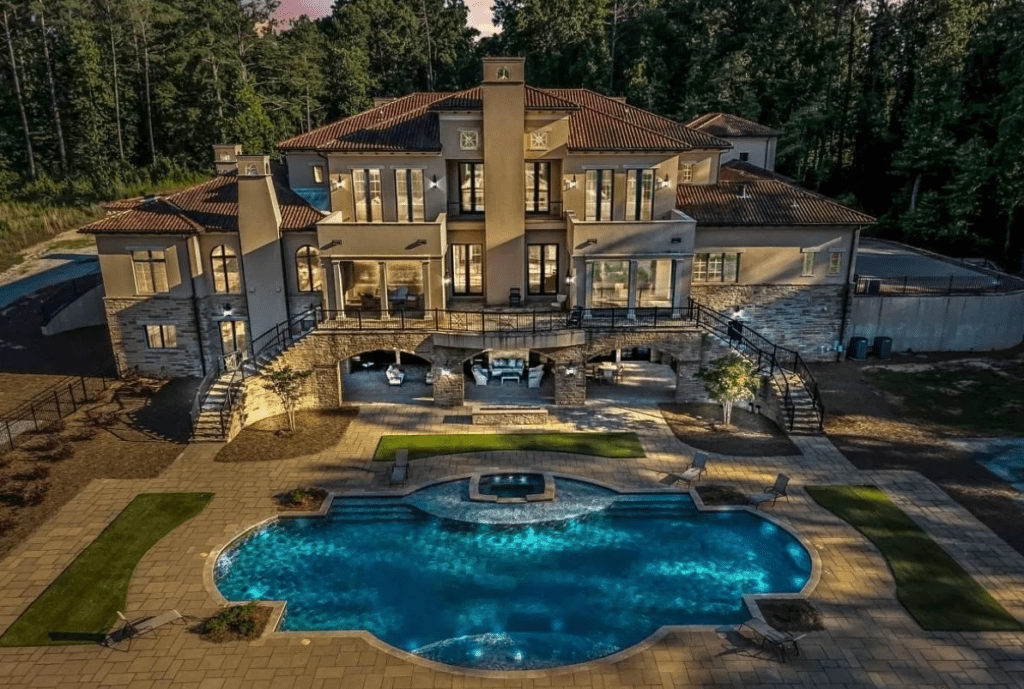 The Butner Road Mansion is a sprawling, 26,000-square-foot mega-home with nine bedrooms and 14 bathrooms. The huge house sits on just over 15 acres of wooded land and comes equipped with a stunning pool in the backyard that’s perfect for backyard fun in the Georgia sun.

Head inside this large house and you’ll find luxurious details like a winding staircase in the entrance hall and big windows in the dining room. The whole house lets in plenty of natural light and the floors are a blend of wood, tile, and stone. You’ll also find several fireplaces, which is ideal since the city of College Park gets wet and cold in the winter months.

This house offers large built-in bookshelves in one of several living rooms/dens — perfect if you like reading.

7. The Home on Blackland Road 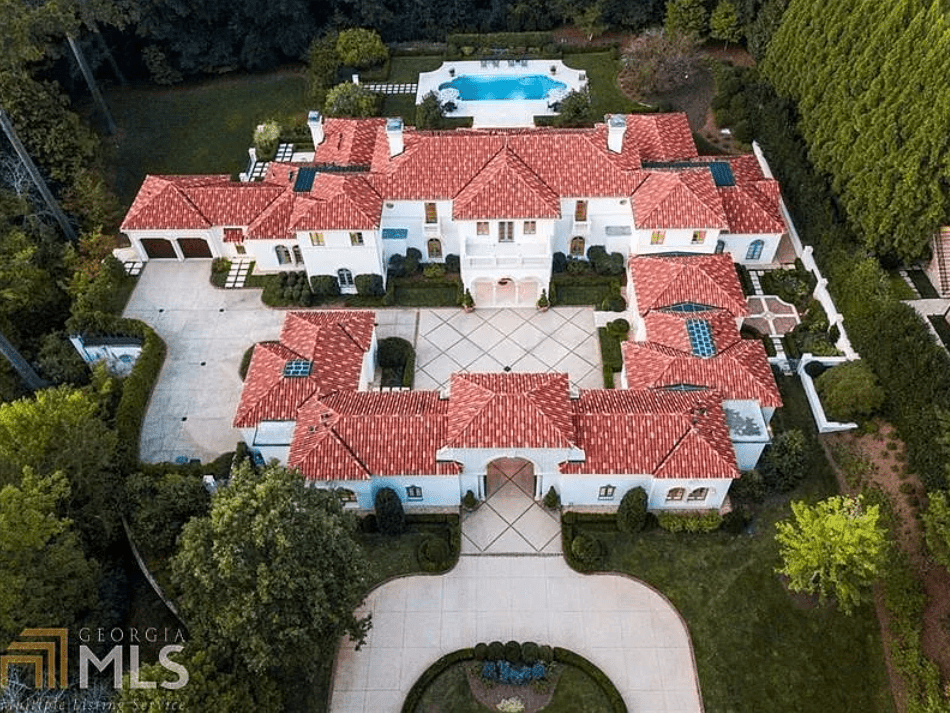 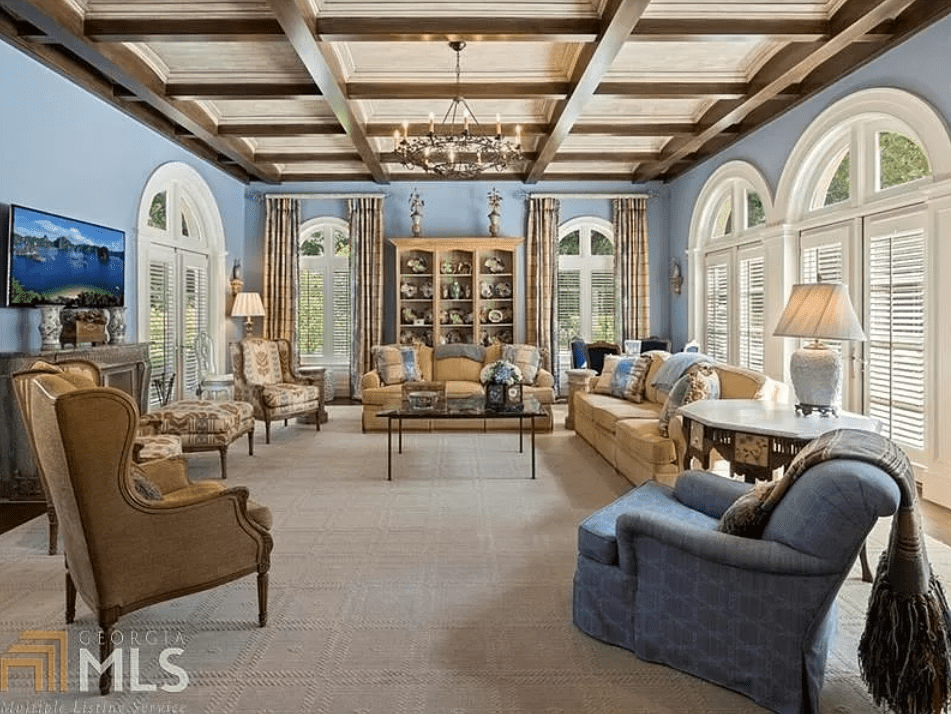 The house itself is amazing. Inside you’ll find ornately decorated rooms filled with unique design details like arched doorways and beautiful crown molding. The whole space has a subtle Victorian feel, but modern touches like canned lighting keep things fresh and airy!

Outside you’ll see a large pool and plenty of green space. The lawns are beautifully cared for while sculpted foliage offers a touch of royalty. It’s a truly breathtaking space — but the price tag is downright jaw-dropping. The Home on Blackland Road costs an estimated $9 million, making it the seventh-most expensive house in Georgia.

This house was designed by architect Jeffery W. Smith of Palm Beach, Florida.

6. The Mega-Home on Ferry Road 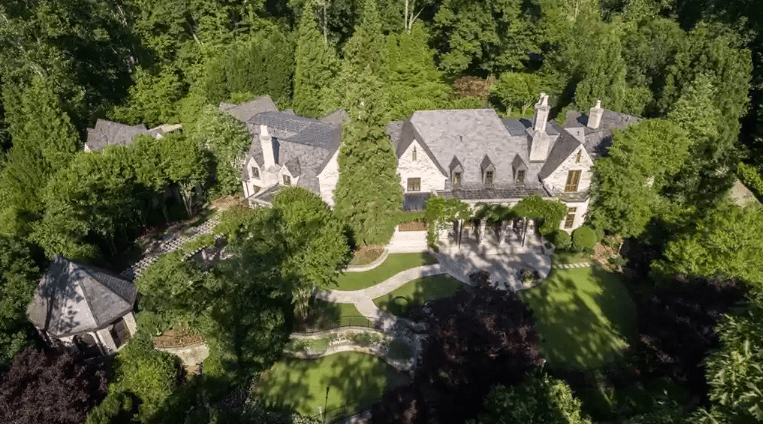 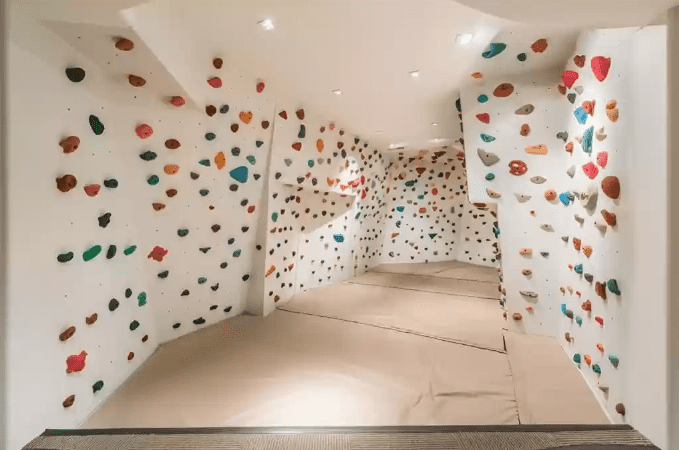 The entire house comes in at 13,500 square feet, with six bedrooms and six and a half bathrooms.

With two stories plus a basement, this amazing home includes an elevator — you know, in case you get tired walking between your master suite and the movie theater. You’ll also find an in-ground swimming pool and four fireplaces, so there’s plenty of space to relax and have fun.

This house comes with 10 acres of private land and access to a pond, a river, gardening space, and screened-in outdoor seating.

5. The Estate on Trammel Road 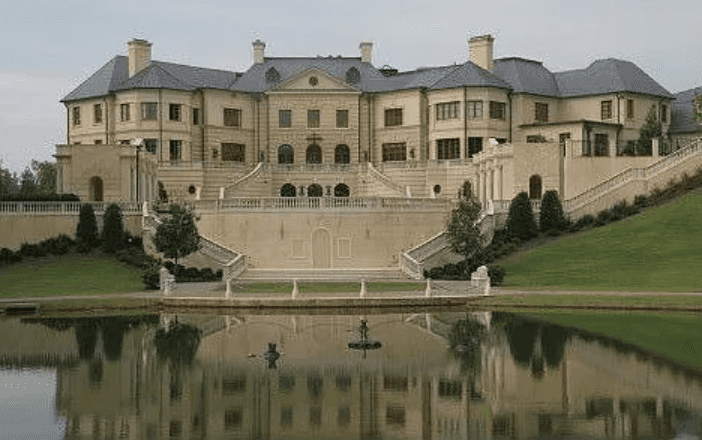 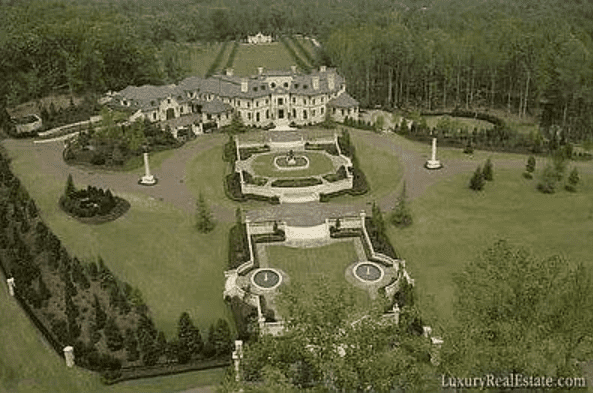 Take a look at this estate — big doesn’t even begin to describe it.

Incredibly, this house was once worth an estimated $50 million. However, reports of foreclosure and other problems peg the mansion’s current value at about $15 million. Either way, this is one of the biggest and most expensive homes in all of Georgia!

The Estate at Trammel Road was created by Norman Davenport Askins, an architecture firm in Georgia. The firm specializes in classical styles and uses a client’s family history to inspire the design of their home. The firm also accounts for historical architectural periods, particularly when working with pre-existing structures.

4. The Getaway at Little Hawkins Island 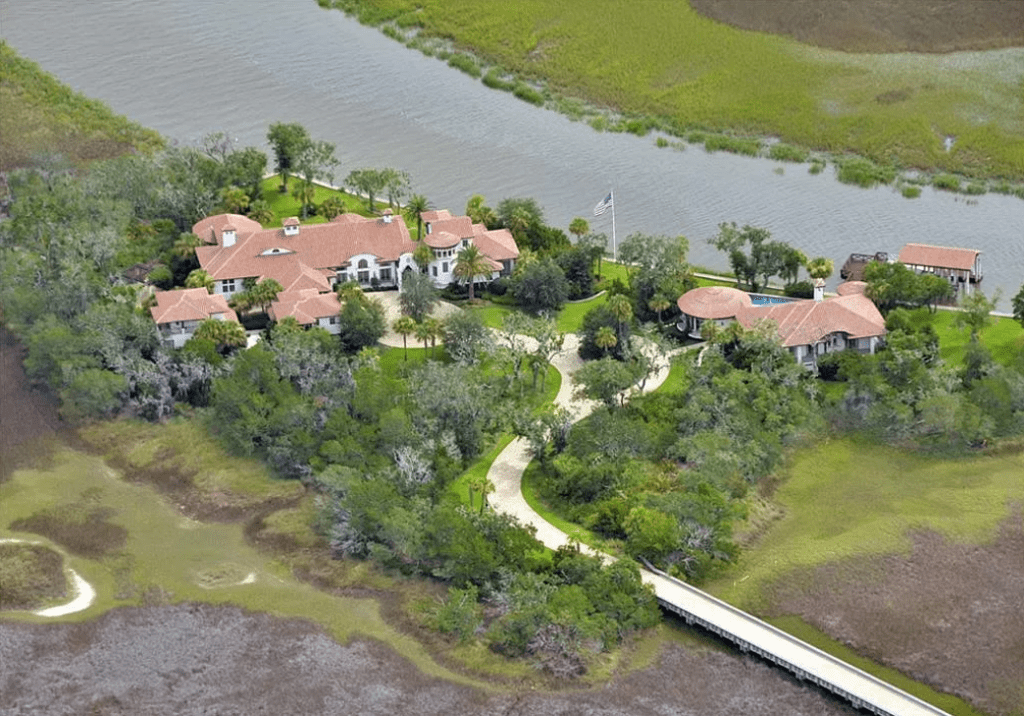 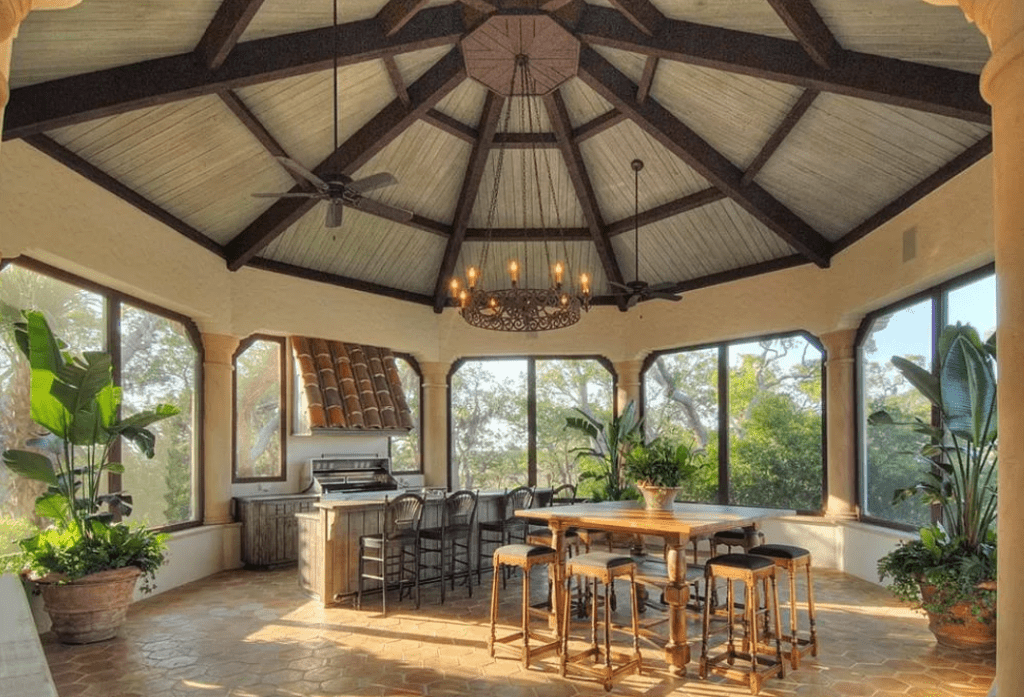 Little Hawkins Island is a private island in Georgia. Set on the four-acre land is a five-bedroom home with sweeping views of beautiful marshland and the Georgia sky. Beyond the main house, the property offers a series of guest cottages, a clubhouse, and indoor-outdoor living areas. The main house connects to pathways leading to a boat dock so you can enjoy the watery landscape.

Inside areas include a bar and a pool table among other luxury details.

To enter this private island oasis, the property includes a gated bridge for car access alongside room for a boat. Everything is topped off with a luxury outdoor pool complete with swaying palm trees!

The guest cottages available on this property feature 1,500 square feet of living space each and both include two fully equipped suites. 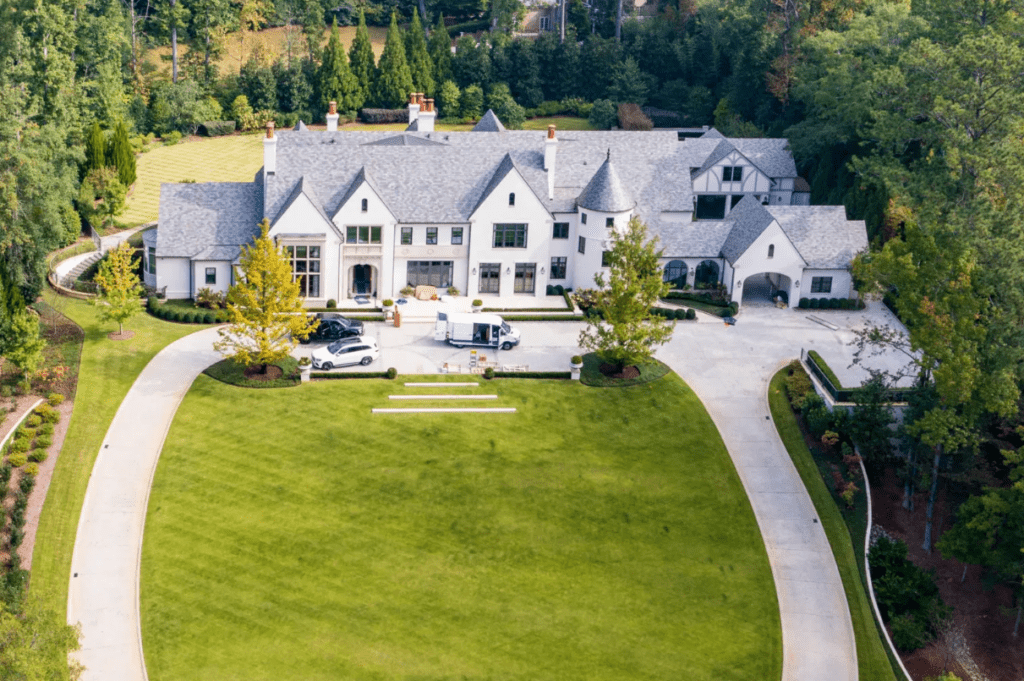 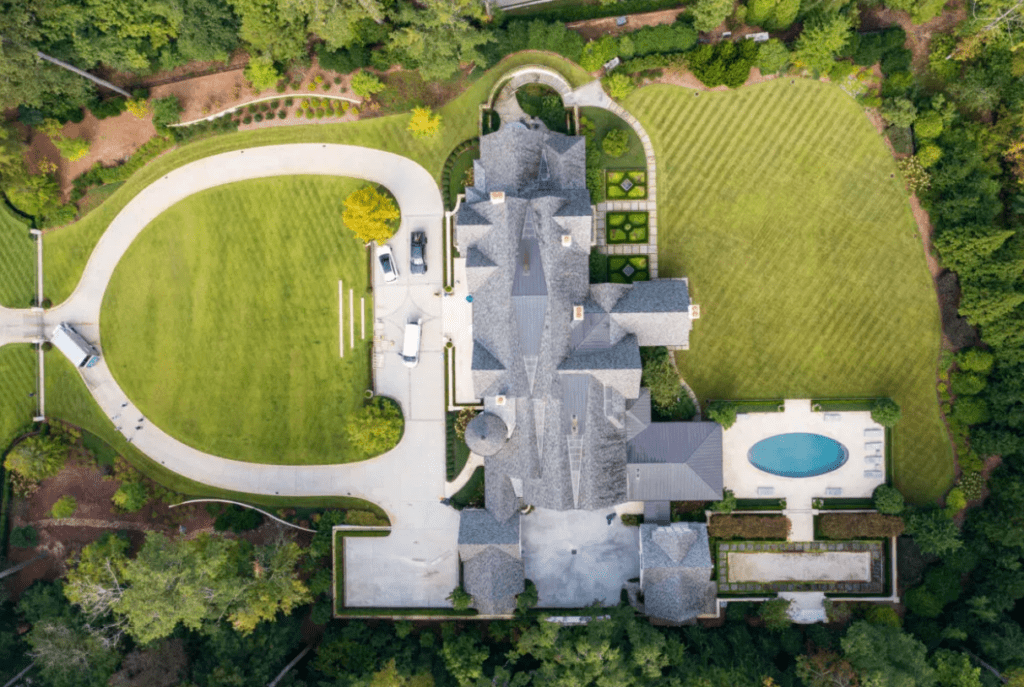 The Buckhead Mansion was built in 2016 and measures a sprawling 15,858 square feet. The huge home hasn’t been publicly listed for sale, but it changed hands for a whopping $18.1 million in a private deal sometime around October 2021, making it the third-most expensive house in Georgia.

Not a whole lot is known about the interior of this impressive mansion, but realtors say the property sits on just over three acres of land and features a luxury swimming pool. The home also has gated entry and is surrounded by trees for maximum privacy.

Interestingly, this house appears to be way more expensive than other homes in its area. In fact, one analysis says the property is valued 1190.67% higher than nearby houses. Would you pay that much for a house like this?

This house has seven bedrooms. 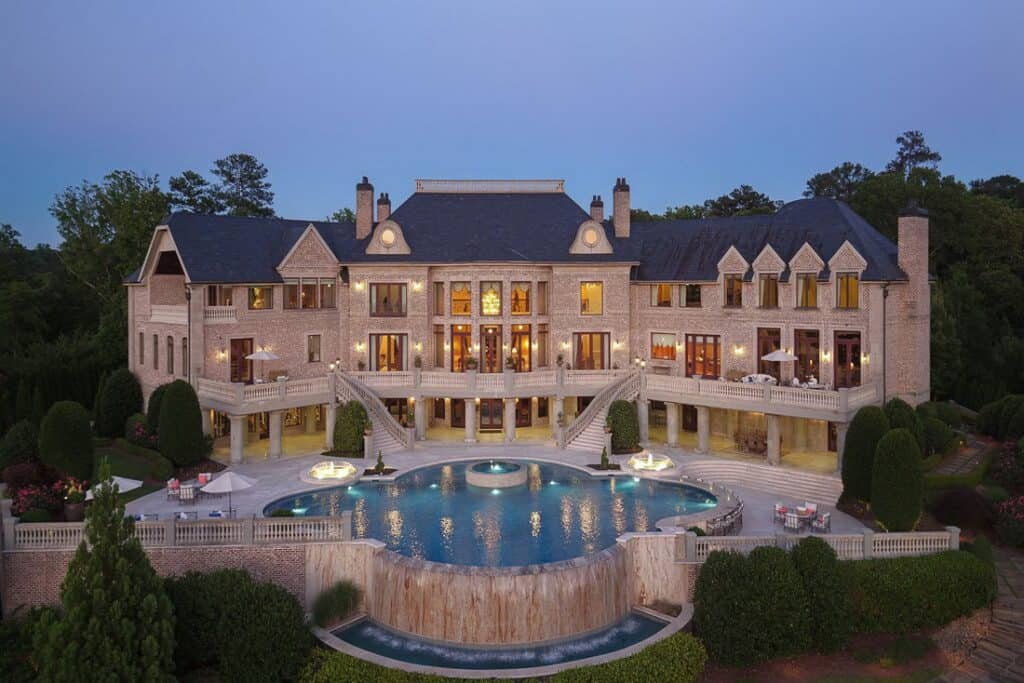 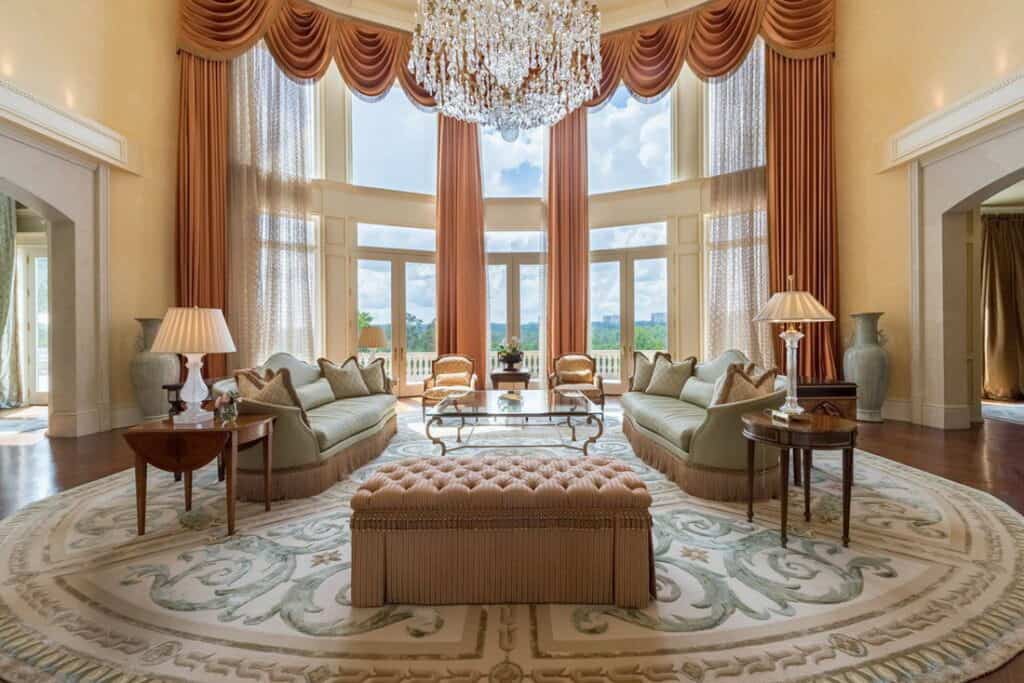 When you’re a billionaire, you just have to buy a huge house — and that’s exactly what Typer Perry did. The Hollywood icon bought this insanely big property in Atlanta before selling it for several million dollars a few years later. The house (or should we say palace) has changed owners several times over the years, but recent estimates peg the current price tag at about $25 million.

Other reports say the house could be worth $15 million, but that’s based on sales from several years ago.

However much this house is worth, you can’t deny that it’s massive. Beyond architecture inspired by the Palace of Versailles, the estate includes a huge infinity pool, an underground ballroom, a full-fledged movie theater, a library… the list goes on.

When it comes to more standard features, the house offers nine bedrooms and more than 14 bathrooms. There’s a beautiful kitchen, but most billionaire owners probably end up having their food made by professionals in the home’s separate catering space. There’s also an elevator, because walking between all those sprawling rooms can get tiring.

This house sits on over 17 acres of private land.

1. The Mansion at Great Hill Place 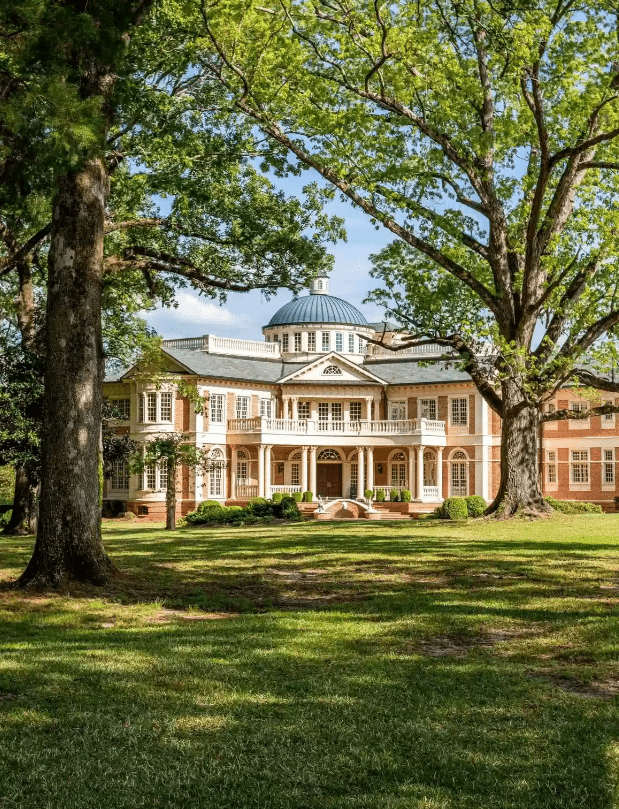 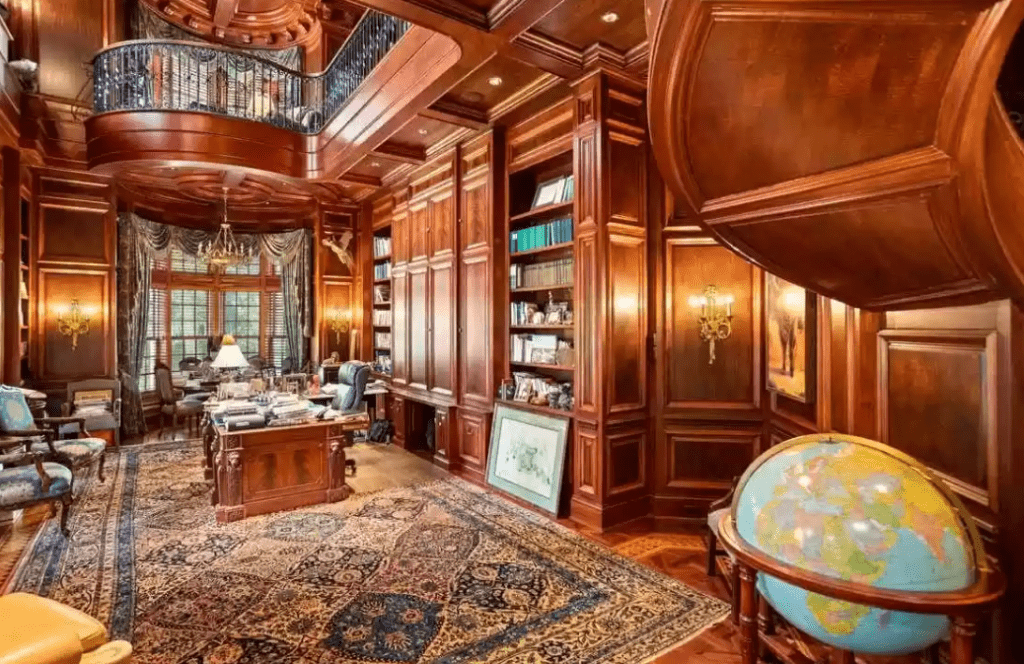 The Mansion at Great Hill Place is the most expensive house in Georgia.

Hidden among more than 300 acres of private land in Georgia stands a sprawling mansion. The incredible home is a jaw-dropping feat of classical architecture, but it’s not quite what you might expect. The mansion is styled to look historic, but it’s actually modern — with classical details like a library/den clad in wood paired with smart home devices.

Experts say the structure is designed in the Georgian style, a type of architecture popular among the wealthy of 18th-century England.

This incredible house is valued at more than $45 million, making it the most expensive home in all of Georgia.