10 Most Expensive Coffee in the World

Coffee has roots in ancient forests of the Ethiopian plateau (a section of highlands covering part of Ethiopia). After growing there for hundreds of years, farmers of the 15th century started cultivating coffee around Arabia before the plants spread throughout the Middle East. Eventually, in the 17th century, coffee landed in Europe before finding its way to the British colonies of the New World.

Throughout the following years, coffee would grow in popularity and become a beloved drink across the globe. Although coffee plants aren’t in short supply, some of these modern coffee beans undergo unique production and harvesting practices that lead to steep prices. To get a peek into the world of expensive coffee, let’s look at the top 10 most expensive bags of coffee in the world. 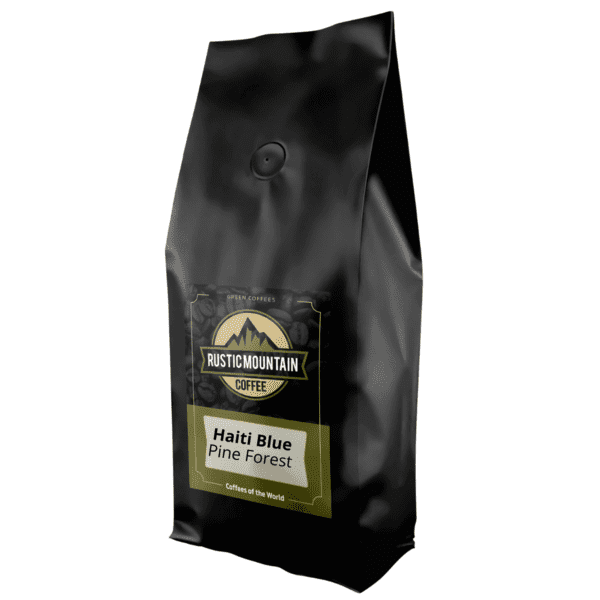 Haiti’s coffee has a long history of disrupted supply chains — and that’s played a big part in the country’s expensive bean prices. This variety of Blue Pine Forest coffee goes for about $24.99 a pound, partially due to political unrest in the country that made exportation difficult.

Still, some coffee is exported from the country. This particular bean features a blue-green color and a sweet flavor profile.

These coffee beans are hand-picked by farmers on the island nation. 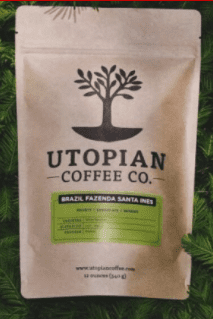 According to some coffee connoisseurs, Brazil isn’t known for great beans. As Utopian Coffee put it, the nation is known for its coffee “quantity,” not quality. However, that changed with the release of Brazil Fazenda Santa Ines. Selling for about $25 per pound, this very expensive coffee is produced by the Pereira family and features notes of chocolate.

Amazingly, this coffee did more than break Brazil’s pattern of lower-quality coffee: the blend was named one of the best coffees in the world according to a ranking by the Cup of Excellence organization.

The Pereira family isn’t new to coffee. In fact, the family has been in the coffee bean business since 1979 when they took over production at Fazenda Santa Ines. 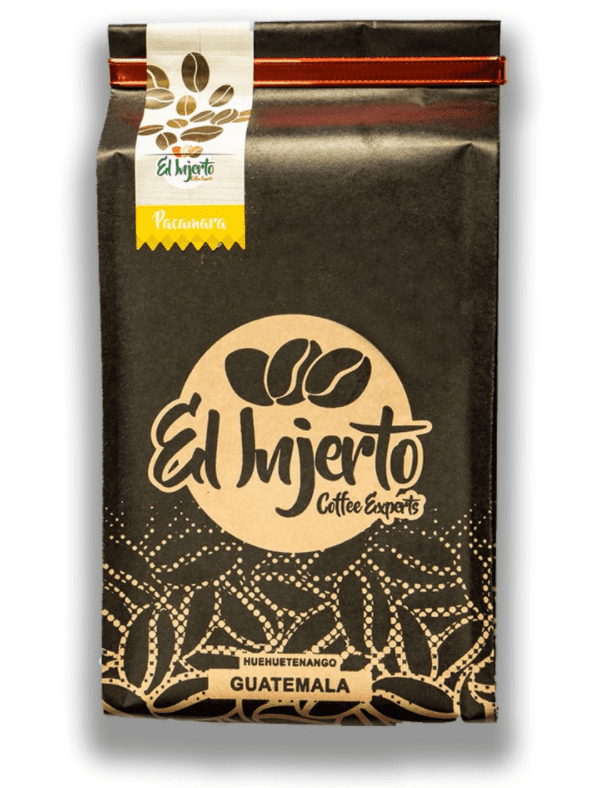 With notes of tangerine and other tropical fruits, this expensive coffee goes for an incredible $27 per pound. That high price is partially due to the bean’s hand-picking and unique water bath process. What’s the water bath involve? According to one report, the coffee beans are soaked for 24 hours after being washed in fresh spring water — giving the beans a clean, bright flavor.

Interestingly, this coffee is something of a world traveler. Starting in El Salvador, the bean eventually traveled to the city of Huehuetenango, Guatemala.

Pandora Premium Pacamara Coffee is another big winner according to Cup of Excellence rankings. Winning the number one slot seven times, this coffee leads the pack for the most first-place awards in the competition. 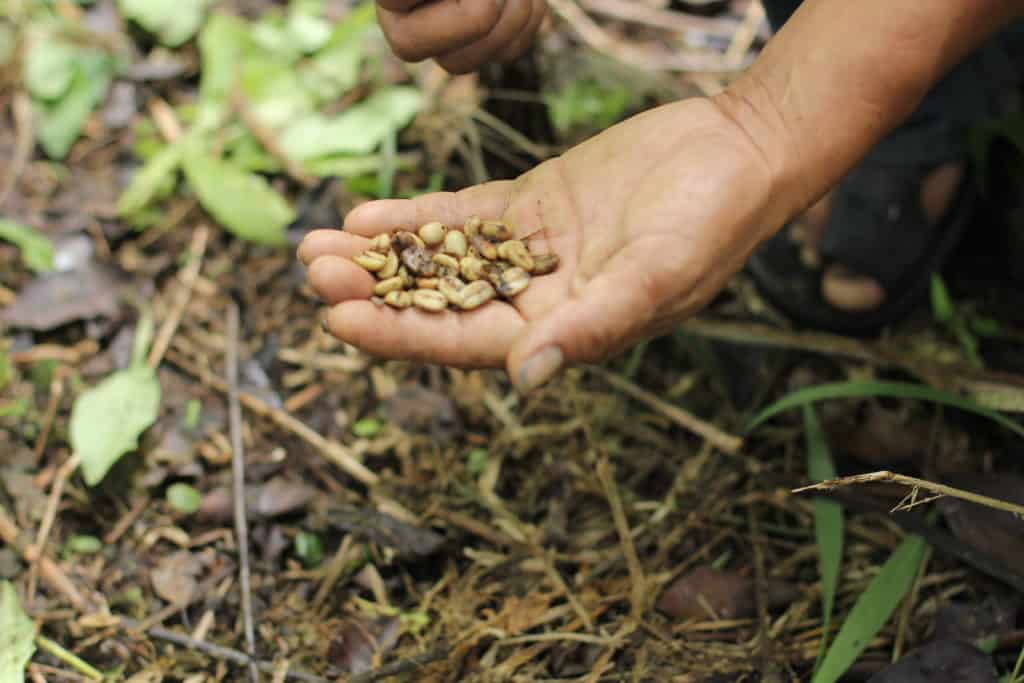 If you’ve ever heard of Kopi Luwak, you might know the name poop coffee. That doesn’t sound very appetizing — so what does it mean? Well, this coffee does actually involve poop. The traditional production technique involves feeding a particular kind of berry to civet cats. The berry is partially digested, leaving a whole bean in the animal’s droppings. The bean is then harvested and cleaned before it’s roasted.

With such a surprising production process, this coffee has a “unique” flavor profile. And what are people willing to pay for that flavor? Estimates show a steep price tag of about $45 — although that price can jump to over $400 depending on the brand.

Part of the unique flavor this coffee offers comes from the partial fermentation that takes place in the civet cat’s digestive system. As the coffee bean travels through the animal, its taste changes, resulting in the expensive blend of earthy and chocolaty notes. 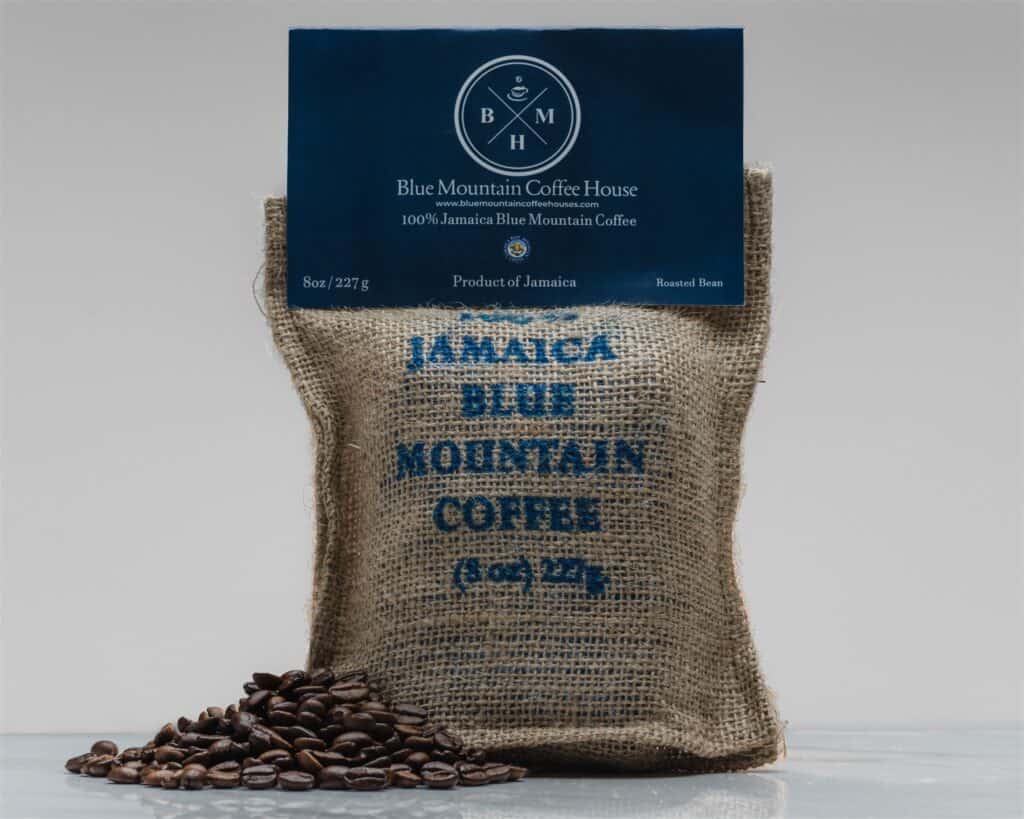 This coffee has been cultivated since the 1700s, with farms throughout the Blue Mountain ranges of Jamaica. Today, there are over 10,000 farms that produce Blue Mountain Coffee, but that high production rate hasn’t stopped prices from climbing. Selling for about $58 a pound, this expensive drink gets part of its price from its labor-intensive harvesting process.

What does that process involve? Mainly, farmers have to work with the difficult terrain of the Blue Mountains. This environment features steep drops and slippery surfaces that rest thousands of feet above sea level. In addition, these coffee crops take about twice as long as other beans to mature — only extending the difficult harvesting process.

Although there are a lot of farms producing this coffee, inspection standards result in about 15% of beans getting discarded. 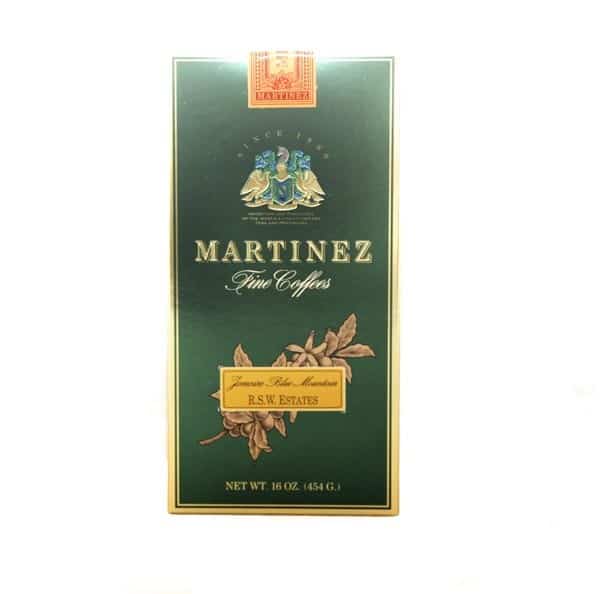 Like the last entry, this coffee comes from the Blue Mountain ranges of Jamaica. However, the special RSW Estates blend features a combination of beans from three family-owned farms — giving coffee fans a rare blend of small-farm flavors.

This combination of coffee beans is processed at Sherwood Coffee Works, a processor that’s been around since the 1700s.

Since the blend is hard to come by, it’s easy to spend about $70 on a one-pound bag.

Sherwood Coffee Works, the processor that helps produce this blend, is one of the first Blue Mountain coffee farms. It’s also one of the largest still-running farms in the region, at over 100 acres. 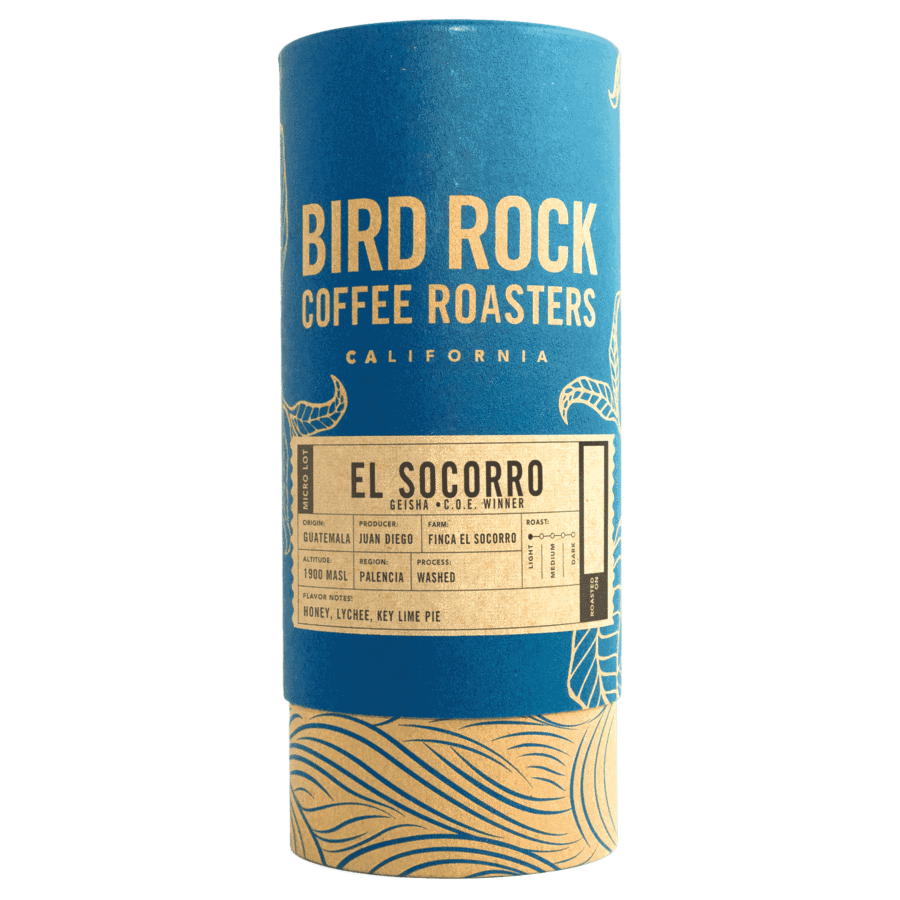 Selling for about $102 per pound, this very expensive coffee is described as “spice-toned” with hints of dried coconut and chocolate. The beans come from El Injerto, one of Guatemala’s most iconic coffee farms.

Interestingly, this coffee is produced with the “washed method,” a process that involves removing the fruit from the beans before they’re dried, letting drinkers taste more of the bean. In contrast, “natural processed” coffee beans aren’t separated from their fruit — resulting in a fruitier final product.

Critics seem to think this coffee is worth the price: In 2017, the beans scored second place at the Guatemala Cup of Excellence green coffee competition. 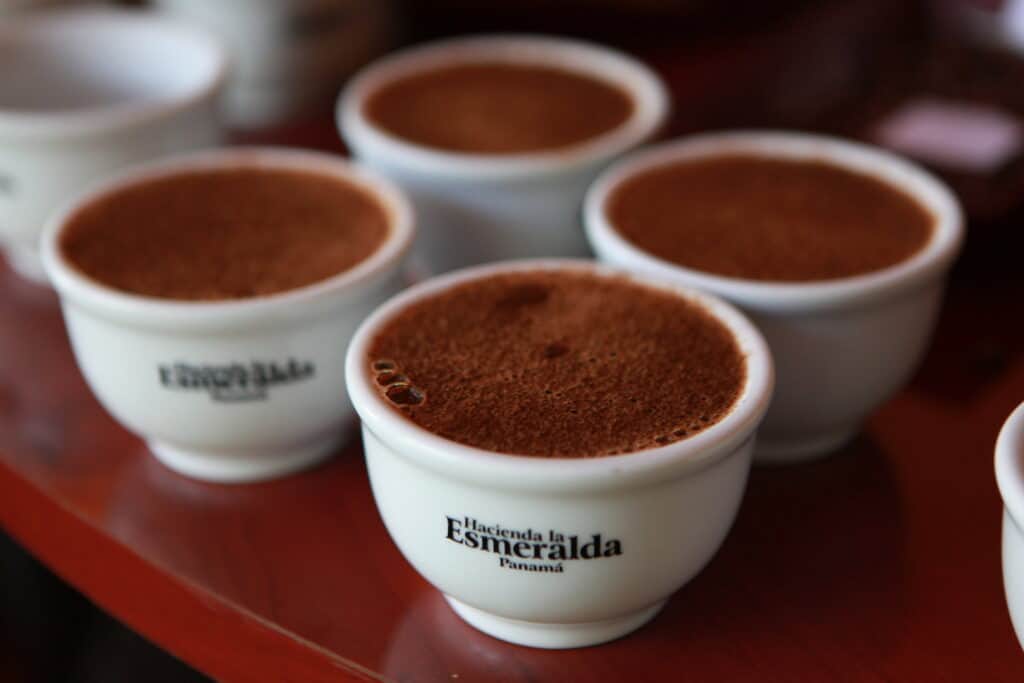 This coffee is produced by the Petersons — a world-renowned family of coffee farmers. The family has been in the coffee business since 1967 when Rudolph A. Peterson purchased two coffee farms during his retirement. Today, the family operates four farms and makes the expensive Geisha drink.

Selling for about $130 a pound, this expensive coffee was first planted by the Peterson family in an effort to avoid the grip of a fungus spreading across one of their farms. That decision proved to be successful, leading to the Peterson’s current production of Geisha Coffee.

The fungus that the Peterson’s were trying to escape is called Mycena citricolor, but it’s sometimes called Rooster’s Eye. 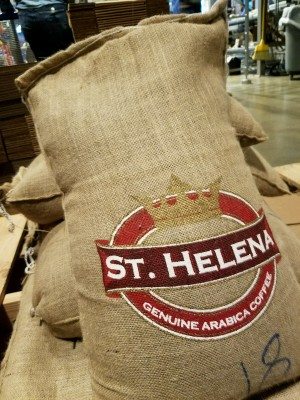 St. Helena is a small volcanic island situated in the south Atlantic Ocean. The small country doesn’t have a big population, but that didn’t stop it from creating a very expensive coffee. Known as St. Helena Reserve, this citrus and caramel-flavored coffee goes for about $160 per pound.

Because production was so limited, it’s unclear if the coffee is still available — but if you find a bag, good luck spending anything less than $200. Incredibly, even buyers who wanted just a couple ounces had to pay $20 when the beans sold at Starbucks in 2016.

Starbucks has sold some expensive coffee in the past, but according to one report, this is the most expensive batch of beans the company ever offered. 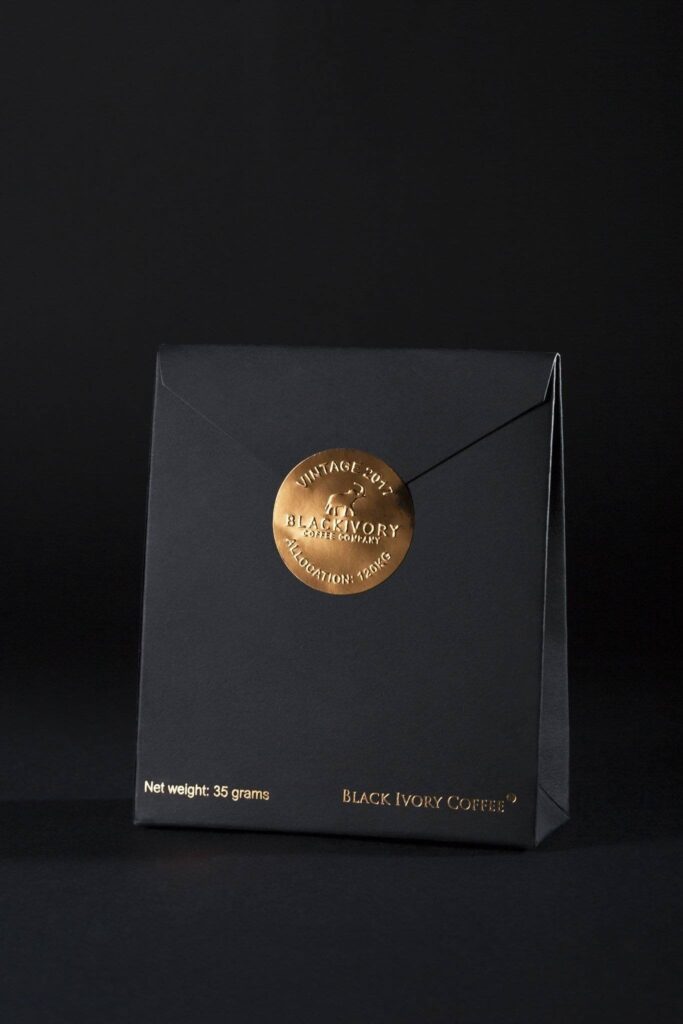 Black Ivory Coffee is the most expensive coffee on the market.

Going for a wild $500 per pound, Black Ivory is easily the most expensive bag of beans on the market. So why does this coffee sell for half a grand? Strangely, it comes back to animal dung. Yes, like the Kopi Luwak coffee, this ultra-expensive drink involves extracting beans from an animal’s droppings. This time, though, that animal is the elephant.

Want to purchase less than a pound of this strange coffee? You should still be ready to spend about $120 for a 1.23-ounce bag of these unique beans.

You may be wondering why people would spend so much on coffee. Well, beyond the uniqueness factor, part of the proceeds from sales of this coffee goes to charities dedicated to raising awareness about elephants (the species is considered vulnerable by the World Wildlife Fund.)

10 Most Expensive Wedding Venues in the World