9 Most Expensive Caskets Ever Sold

Caskets have been used for millennia to preserve, respect, and honor the dead, even back in ancient times. The traditional construction uses mahogany or other strong woods, though in the last 100 years or so stainless steel has become the most frequently used casket material.

No matter what caskets are made of, they can be decked out with labor-intensive artistry and luxury features.

Continue reading to learn about the most expensive caskets that money can buy, including the luxury materials and constructions that drive their values to the top of their industry. 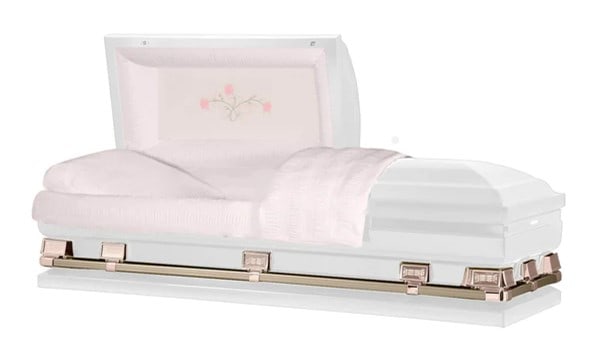 The Paris Rose Commander XXL is an oversized casket by the Titan brand. It’s the only casket on this list made from stainless steel, which is actually the most common material used for caskets today though nowhere near the most expensive.

Still, this steel casket gets its value from its detailed hardware, reinforced handles, and crepe interior. The coffin is available in extra-large sizes from 40-44 inches and in a choice of over 20 colors. The standard model comes with a locking mechanism and a full-seal gasket. The coffin sells for $4,099 on Titan Casket.

Titan was formed in 2016 by Scott Ginsberg. The company started as an Amazon vendor before opening up to co-founders Joshua and Elizabeth Siegel and expanding into its own eCommerce venture. 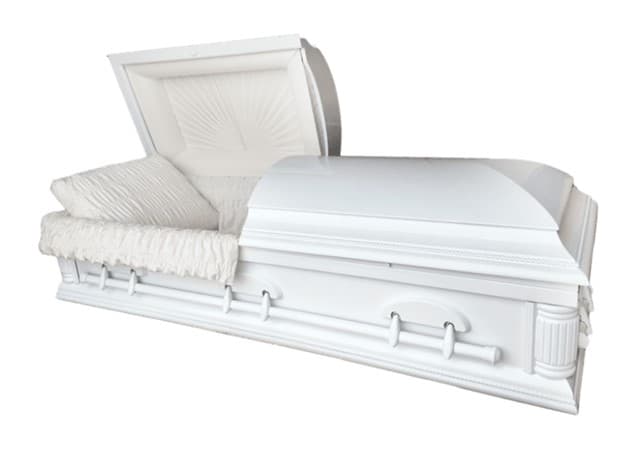 The Estate Oversized Poplar Casket is the most expensive that the brand Sky Caskets offers. It is made from solid poplar wood and has a shiny gloss finish on the outside while on the inside, the coffin is fitted with Rosetan velvet.

The package sold on Sky Caskets comes with a full gasket seal, adjustable mattress, locking mechanism, swing bars, spindle corners, and a continuous weld construction all the way around that completely seals the bottom. The casket costs $5,995 from Sky Caskets.

Sky Caskets has been making high-quality funeral products since 1996. This makes them the self-proclaimed “oldest casket distributor” that operates online. 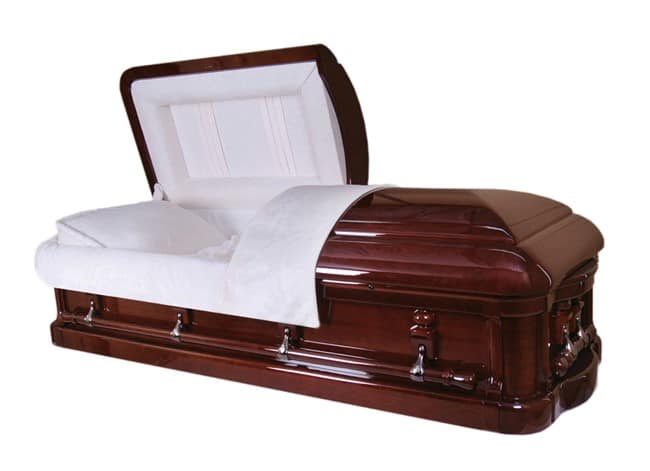 The Royal Grace Custom is a solid mahogany casket from Lone Star Casket, which normally retails for $18,990 but goes on sale for $7,899. The hardwood casket is fitted with mahogany swing bars as well as a hand-polished, high-gloss finish overtop the brand’s sculpted designs.

These caskets almost look like furniture, with smooth rounded edges and corner details emulating architecture. Mahogany has long been the most traditional and prized wood used in casket-making, so it should come as no surprise that this casket is among the most expensive that you can currently buy.

Decorative wooden caskets like this one date back to ancient Mesopotamia and Egypt where artisans would create burial boxes from the wood, cloth, and paper materials available. Casket manufacturing didn’t develop in the West until the 1800s, but the materials they first used to make them were woods like oak and mahogany. Cabinet and furniture makers were the first casket-makers here. 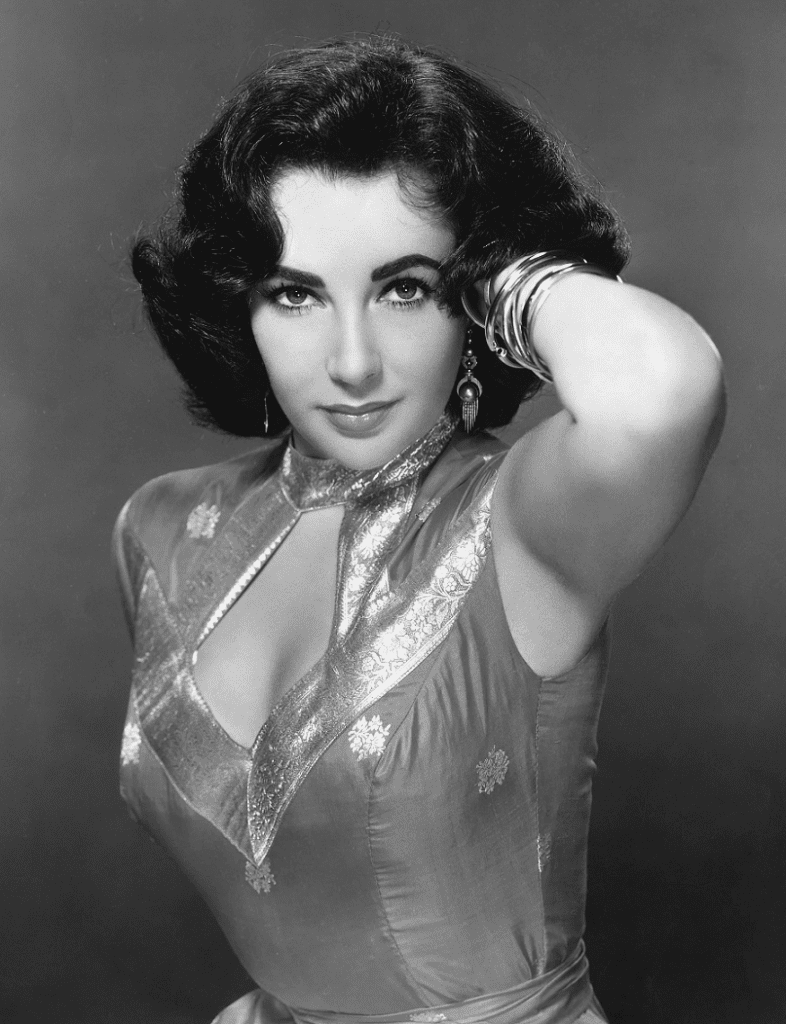 Elizabeth Taylor’s casket was made from full mahogany in a traditional Jewish design for the actress and model when she died at the age of 79. She was laid to rest in Glendale, California at the Forest Lawn Cemetery. By “Jewish design,” we mean that in the tradition of Jewish funerals, the casket was not only all-wood but was constructed without a single nail.

Only a traditional form of glue held the pieces together.

In her will, Taylor stated that she wanted her own casket to arrive at the funeral 15 minutes late as a joke on her high-life lifestyle, where she was known for being fashionably late. Her $11,000 coffin rests in the same cemetery as other superstar icons like Michael Jackson, Jean Harlow, and Clark Gable.

Elizabeth Taylor was one of the most shining stars in old Hollywood, famous for many theatrical film productions like Who’s Afraid of Virginia Woolf? (1966), The Taming of the Shrew (1967), Suddenly, Last Summer (1959), and Cleopatra (1963). She is still one of Hollywood’s most famous glamor models of all time. 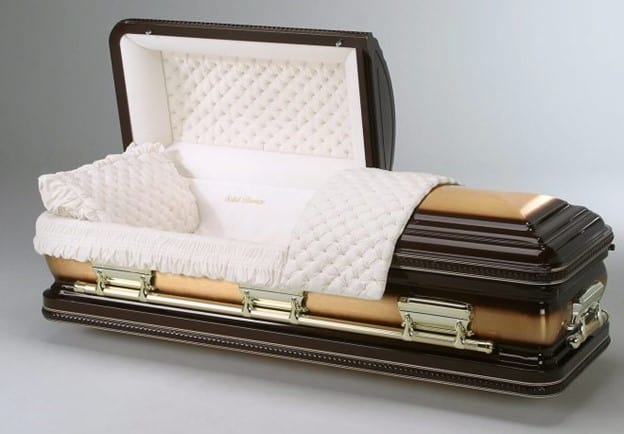 Bronze/copper caskets from the luxury casket manufacturer, in-Valhalla, can run you up as much as $12,000, though the size and customizable options that you choose will make a difference. The caskets are made from a bronze and copper alloy that resists corrosion and is even stronger than stainless steel. They will patina over time, but they will not rust.

The raw materials required to make these caskets, sometimes called “gasketed,” drive up their prices. Only 2.2% of caskets purchased are made from copper, according to in-Valhalla themselves, so being one of the lucky few to be able to afford this luxury burial will cost you a bundle.

Copper patinas when it reacts chemically to the air, which happens over time. Instead of rusting, a protective coating forms over the metal that is bluish-green in color. This will happen to copper caskets, but it will also prevent them from rusting or corroding.

In fact, you may not know that the Statue of Liberty is a copper statue! It’s only green because of the patina that has developed over time. 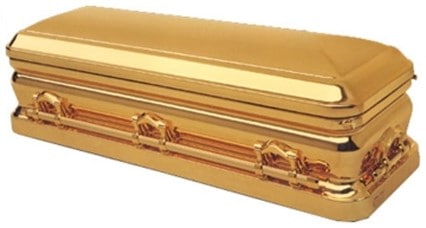 The Promethean is a casket made from 48 ounces of solid bronze, plated in 24K gold. It is arguably the most famous expensive casket and nearly the most expensive that can still be bought. The Casket Depot sells them over the phone for $24,000, though they are made by the Batesville Casket Company.

These caskets are hand-crafted and polished for two weeks, plated to ensure resistance to corrosion on the outside. Meanwhile, the inside is chemically treated to protect against rust. The casket comes with a service that includes a memorial program and portfolio as well as a full manufacturer’s warranty.

Several celebrities have been buried in the Promethean Casket, including the musician, James Brown. Recently, Michael Jackson was also buried in a Promethean. 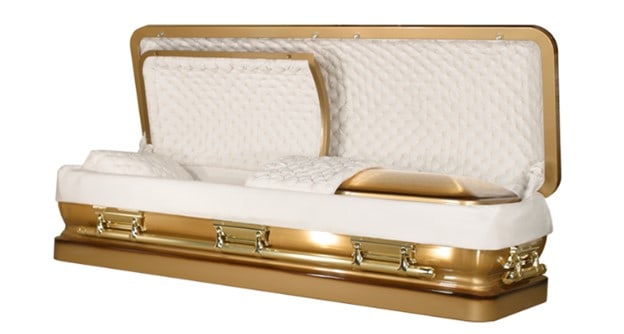 The Couch Double Seal/Double Lid Casket is a massive undertaking by Casket Xpress, who makes this welded bronze casket from 96 oz of solid bronze sheets for a final casket that weighs over 400 pounds. They are advertised as having tailored interiors with velvet and head pillows.

They can also be fitted with 14K gold handles on request, which will only raise the quoted price beyond its listing of $27,999.99. You can even have it shipped to you for $495-$995. All in all, this solid bronze behemoth is the most expensive casket that you can currently buy.

Though iron caskets were finished with bronze as early as 1840, solid bronze caskets like this one were made for sale until 1918. Though bronze and copper are durable, stainless-steel caskets are now the most popular burial options in the West and have been since the 1950s. 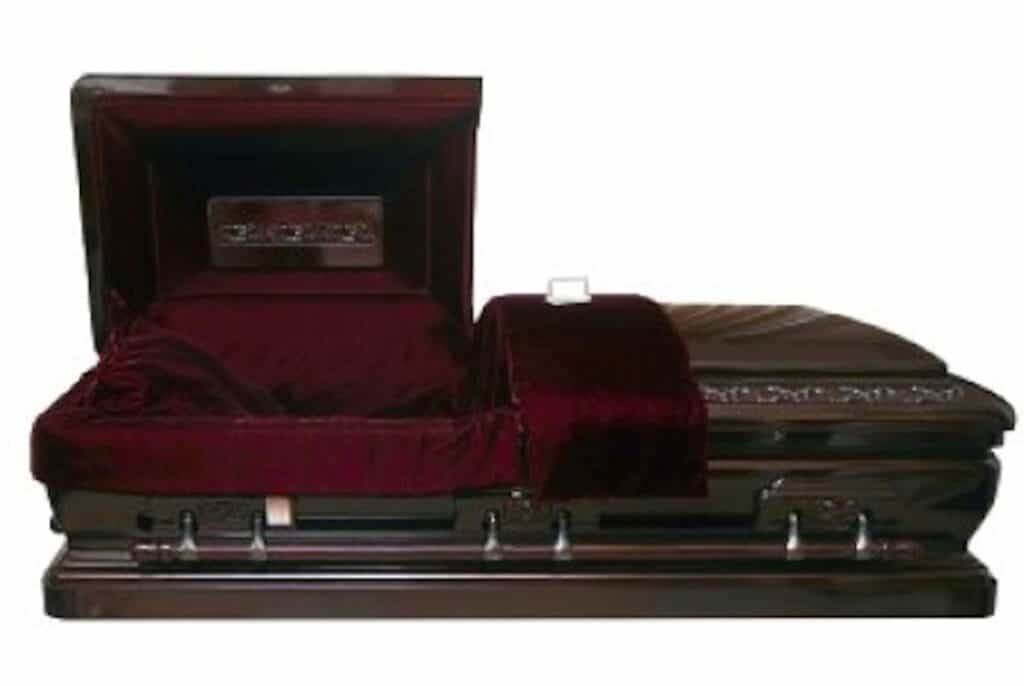 The Xiao En Center Casket is an all-mahogany wooden burial casket whose value is based not only on the luxury wood but on its hand-painted artistic accents and maroon velvet interior. This casket is known as the main choice for high-value businessmen and Chinese officials in China.

Each of these luxurious mahogany caskets sells for $36,400. The Xiao En Center is a burial service in China that offers not only burial caskets but also an ancient tablet and a space in a columbarium for the deceased’s ashes, if appropriate.

A columbarium is a public structure used to store funeral urns, cremated remains, and sometimes coffins. The ashes of the deceased in Buddhist tradition will be placed in these for their ceremonies. The structures are called “nagutas,” which translate to “bone-receiving pagoda.”

The most expensive casket is Zsa Zsa Gabor’s Casket. The 93-year-old actress-superstar was gifted this casket made from 24K solid gold, built by The Golden Casket, the upscale funeral home. Zsa Zsa Gabor lost her leg to a serious infection and was sent this casket, which cost a total of $40,000, 6 years before her actual death in 2016 at the age of 99.

Anyone else who needs to buy this coffin can pay the $40,000 premium. Craftsmen will take 200 hours to make each one by hand.

The head of sales at The Golden Casket stated that the casket gift was meant sympathetically, but Zsa Zsa’s husband, Prince Frederic von Anhalt, was having none of it. He was so offended by the gesture that he publicly promised to melt the casket and turn the gold into jewelry.

8 Most Expensive Classic Cars Ever Sold

9 Most Expensive Hair Dryers Ever Sold