8 of the Most Expensive NFL Stadiums Ever Built

There are 32 NFL franchises, and they share 30 stadiums across the United States (four teams share two stadiums). All but four of them have naming rights, including all the ones on this list, which are recognizable by the corporation that optioned their name at the time of the stadium’s construction.

No stadium is cheap, but some of the NFL stadiums cost billions to build! Here is our list of the most expensive NFL stadiums in the United States. 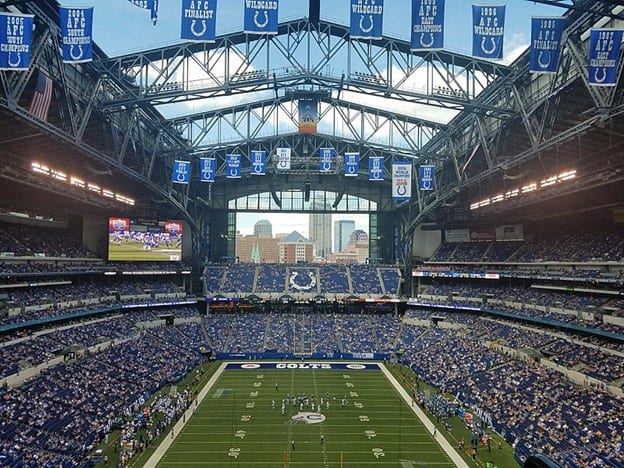 The oldest stadium on this list is the Lucas Oil Stadium, commonly called “The Luke,” completed in 2008. It cost $720 million to build, which should clue you into how expensive this list is going to get. The architecture was handled by HKS, Inc., with a 67,000-person capacity, expandable to 70,000.

The stadium replaced the RCA Dome and served as part of the expansion project for the Indiana Convention Center. It is the home of the NFL’s Indianapolis Colts.

In addition to football games, the Lucas Oil Stadium is the home of the championships for Drum Corps International or DCI, which is the most hardcore marching band circuit in the world. 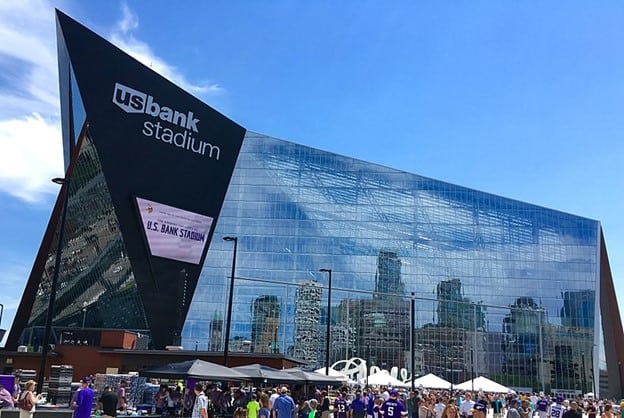 The U.S. Bank Stadium used to be the Hubert H. Humphrey Metrodome. Unlike some stadiums on this list, the U.S. Bank Stadium is an indoor-only stadium. It opened in 2016 and serves as the home of the Minnesota Vikings (they used to play at the Metrodome until it became this stadium). 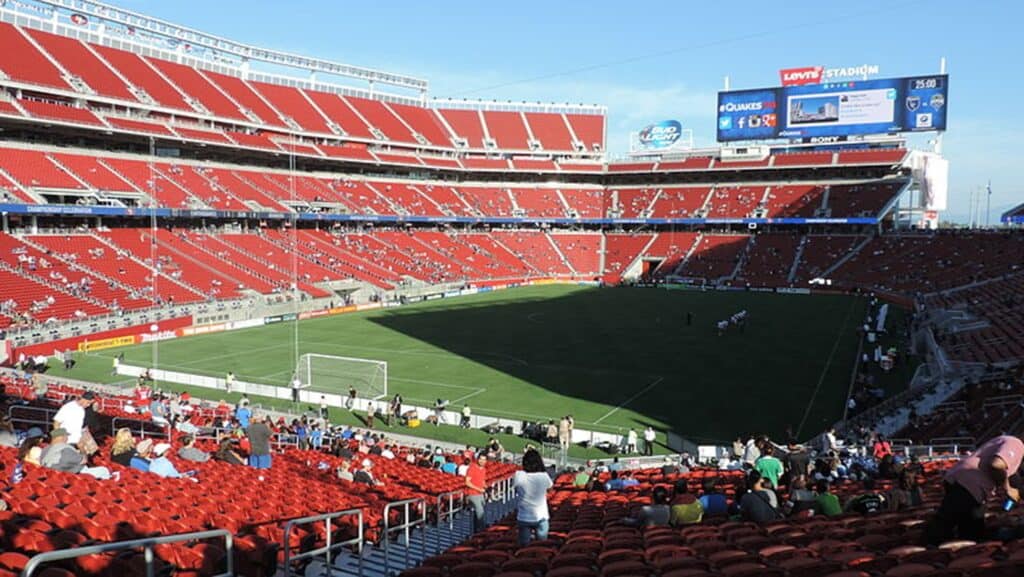 Levi’s Stadium is in Santa Clara, California. The San Francisco 49ers NFL team has called Levi’s their homefield since it was completed in 2014. It cost $1.3 billion to build and seats 68,500, though it was expanded with standing only areas for WrestleMania 31 in 2015, which housed nearly 77,000 people.

Additionally, Levi’s Stadium housed Super Bowl 50 in 2015, the College Football Playoff National Championship in 2015, and the Pac-12 Football Championship Games from 2014 to 2019.

The stadium’s architecture and sightlines have been received well since the stadium was finished. However, the inside has a colder atmosphere than many spectators are used to, only inflamed by some of the most expensive tickets in the entire league. Additionally, the stadium was built in the direct flight path of a runway at San Jose International Airport, which has caused dozens of pilots to log complaints about being blinded by the stadium’s lights. 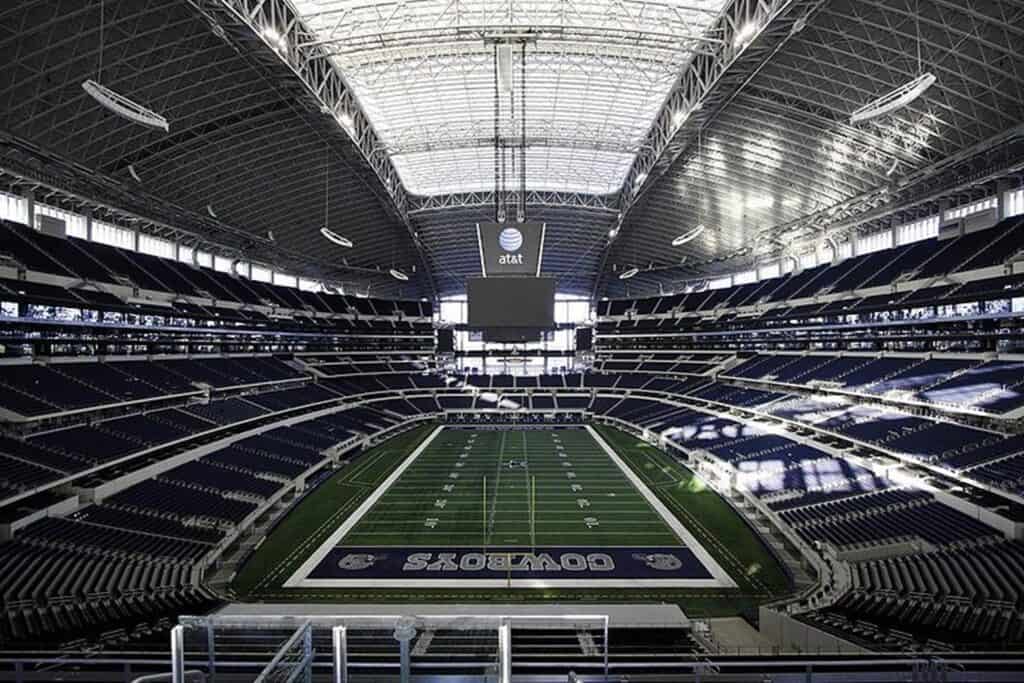 The AT&T Stadium was founded as the Cowboys Stadium when it opened in 2009 but was renamed in 2013. It should come as no surprise that it’s the home of the Dallas Cowboys, as well as the home field of the Big 12 Championship Game and the Cotton Bowl Classic. The stadium also houses soccer, basketball, college, and motocross events. It even has a professional wrestling match and a concert every now and then.

The stadium, which is located in Arlington, Texas, cost $1.48 billion to build. It houses 80,000 people by default but can go up to 100,000 for bigger games, giving it one of the highest seat capacities in the NFL.

The AT&T Stadium is colloquially called “Jerry World” because of Jerry Jones, the current owner of the Dallas Cowboys. The stadium is partly rebuilt from the old Texas Stadium, which was the Dallas Cowboys’ older home field, which they used from 1971 to 2008. This stadium also features one of the largest HD video screens in the world (top 32). 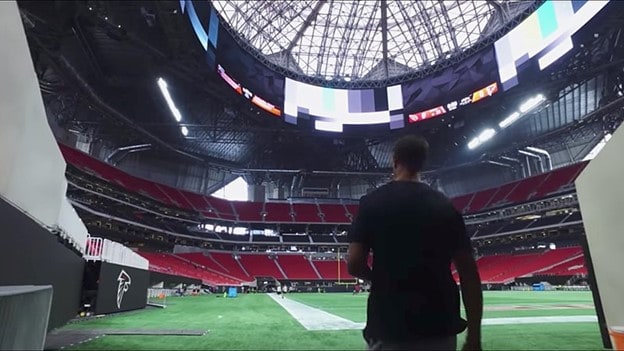 The Mercedes-Benz Stadium in Atlanta, Georgia can hold 71,000 spectators but can be expanded to 75,000 for even larger events. The stadium is most famous for its pinwheel retractable roof, which comes off in panels that are like huge translucent triangles that move along a rail.

The stadium opened in 2017, costing $1.6 billion to build. It is the home of the Atlanta Falcons NFL team as well as the Atlanta United FC, a Major League Soccer team. When converted to a soccer stadium, Mercedes-Benz can hold 42,500 spectators but can be expanded with standing room sections.

The Mercedes-Benz Stadium is designed for functionality, with two huge locker rooms to house college-sized football teams, as well as that signature retracting roof. The seats are connected to the field via staircases – another unique feature. However, in both its exterior and interior design, this stadium has infused a ton of contemporary art to create a signature feel that goes beyond function. Among the 180 featured works is The Atlanta Falcon, a bird sculpture made of stainless steel sculpted by Gábor Miklós Szőke. 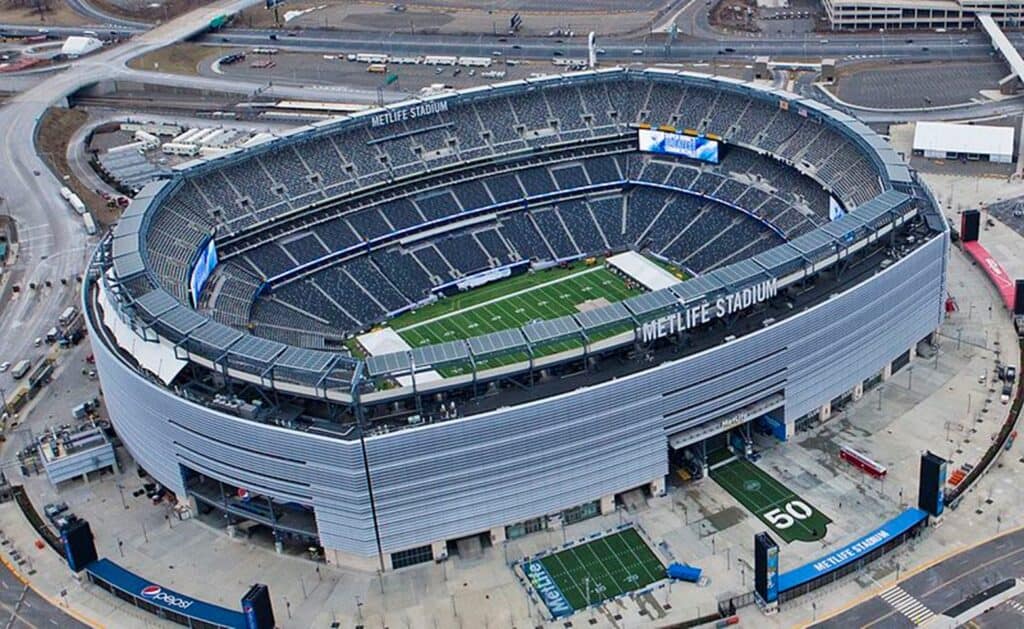 The Meadowlands Sports Complex houses the well-used MetLife Stadium. Since opening in 2010, this stadium in East Rutherford, New Jersey has hosted many huge events, including Super Bowl XLVIII. This marked the first time that a Super Bowl game was played in the New York metro area, as well as the first played in a stadium without a dome in a cold-weather city.

Its capacity is technically 82,500, but it was expanded to hold the nearly 89,000 attendees of U2’s 360 Tour in July 2011. The MetLife Stadium cost $1.7 billion to build, making it one of the most expensive stadiums ever built.

Only two stadiums in the NFL are the home fields of two separate teams, one being MetLife and the other being the SoFi Stadium in Inglewood (see below). Both the New York Jets and the New York Giants play their home games at MetLife. 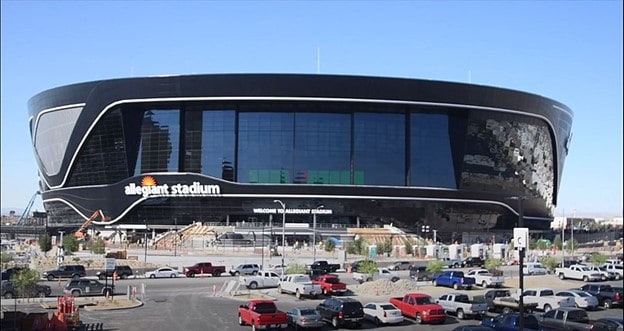 The domed stadium sponsored by the Allegiant Travel Agency in Paradise Nevada is nearly the most expensive stadium ever built. It was finished in 2020 and cost $1.9 billion to build. Allegiant Stadium is the home field of the NFL team, the Las Vegas Raiders, as well as the Rebels college team.

This stadium has been scheduled to host the 2024 Super Bowl (LVIII). Unlike some of the stadiums on this list, Allegiant has a natural Bermuda grass field. 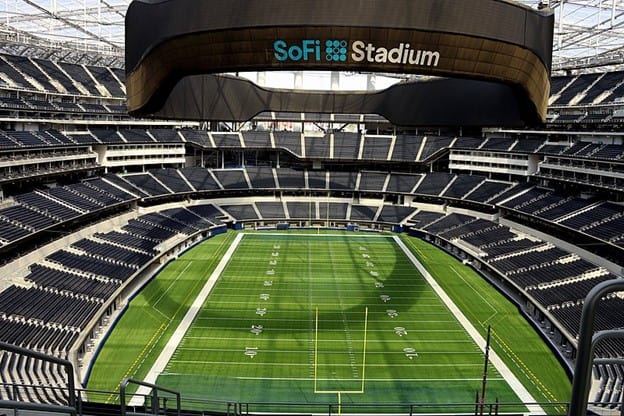 The SoFi Stadium cost $5.5 billion to build and opened in 2020, making it one of the most recent stadiums in the NFL. It is the home of both the Los Angeles Chargers and Los Angeles Rams.

The SoFi Stadium is going to get its ultimate trial run on February 13, 2022 when it hosts Super Bowl LVI. It is also slated to host WrestleMania 39 in 2023 and several events in the 2028 Summer Olympics, including archery and soccer.

All but one of the stadiums on this list cost more than a billion dollars. On the high end, the SoFi Stadium in California costs over five. The most expensive stadiums back up their expenditure with huge spectator capacities, modern art installations, retractable roofs, parking facilities, field and display technology, player facilities, and more.

8 Most Expensive Stamps in the World

8 Most Expensive Elements Found Around the World