11 People with the Rarest Birthmarks Ever

Birthmarks are colored skin marks present from birth, but new ones may also appear throughout life. Even though most birthmarks are harmless and won’t require removal, medics typically refer to them as skin abnormalities.

People can have two types of birthmarks – vascular and pigmented. The former consists of blood vessels that never formed correctly, while the latter represents a cluster of pigment cells that cause color in the skin.

Moreover, vascular birthmarks can be hemangiomas (benign, blood-filled tumors) and port-wine stains (permanent red, purple, or flat skin marks). On the other hand, pigmented birthmarks can be moles and have various colors, including gray and blue.

The cause of most birthmarks is unknown, but it likely stems from genetics. Doctors often advise being careful with moles that change texture, size, or color, as they might indicate melanoma (the most serious type of skin cancer).

Here’s the list of the rarest birthmarks in the world. 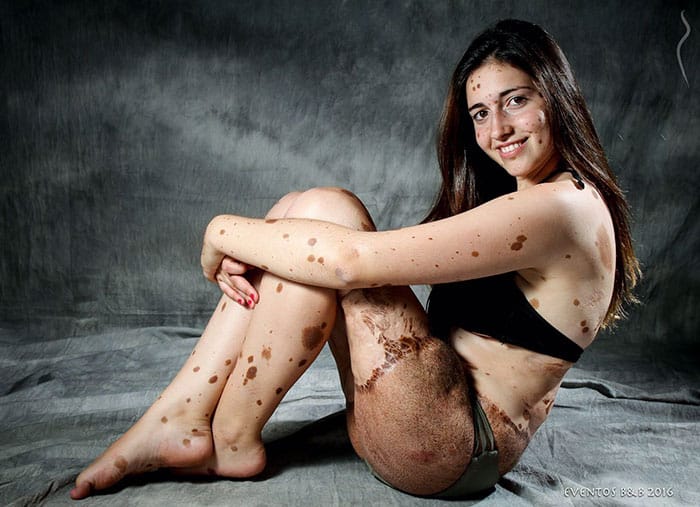 Alba Parejo is 21 years old and has struggled with bullying most of her life due to being born with over 500 birthmarks throughout her body. Parejo has a rare skin disease called a melanocytic nevus, causing numerous pigmented birthmarks that vary in shape and size.

Even though Parejo had surgery that was supposed to remove some parts of dark patches from her body, the procedure left her with significant scarring. Over time, she has learned to embrace her moles and is pursuing a modeling career.

Almost every adult has at least a few moles, making pigmented birthmarks very common. However, only 5-10 percent of babies are born with hemangiomas, and 0.3 percent have vascular birthmarks.

Type: Port-wine stain
Cause: Sturge Weber’s syndrome
Body Part: Spread across one side of the body

Matilda Callaghan was a premature baby, and the medics thought that caused the blue bruise on her face, stretching across one side of her body. However, they quickly realized that the girl had Sturge Weber’s syndrome, a rare vascular disorder causing facial birthmarks, abnormal blood vessels in the brain, and eye abnormalities.

Callaghan also had two holes in her heart, making her parents fear they would lose her. Even though the medics have removed a big part of Matilda’s birthmark, the disorder left her paralyzed and nearly blind. 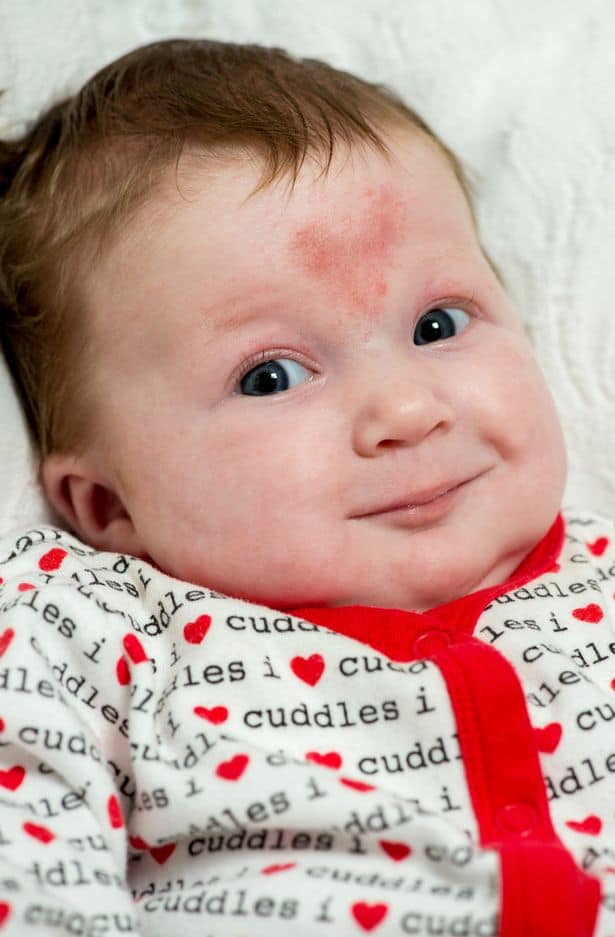 Parents Jade Sparham and Liam Scaife conceived their baby girl on Valentine’s Day and saw a surprise on their child’s forehead after birth. – Their daughter, Poppy-Rae, was born with a heart-shaped birthmark.

Sparham and Scaife believe their child is Cupid’s baby and has the look of love, even though the doctors told them it’s only a pressure mark that will fade with time. However, the birthmark didn’t disappear, and Poppy-Rae has no related health issues.

One of the most common birthmark myths is that they manifest a mother’s food consumption or food cravings during pregnancy. For example, many people believe that if a woman eats many strawberries while pregnant, her baby will be born with a strawberry mark.

Type: Moles
Cause: Unknown
Body Part: Throughout the body 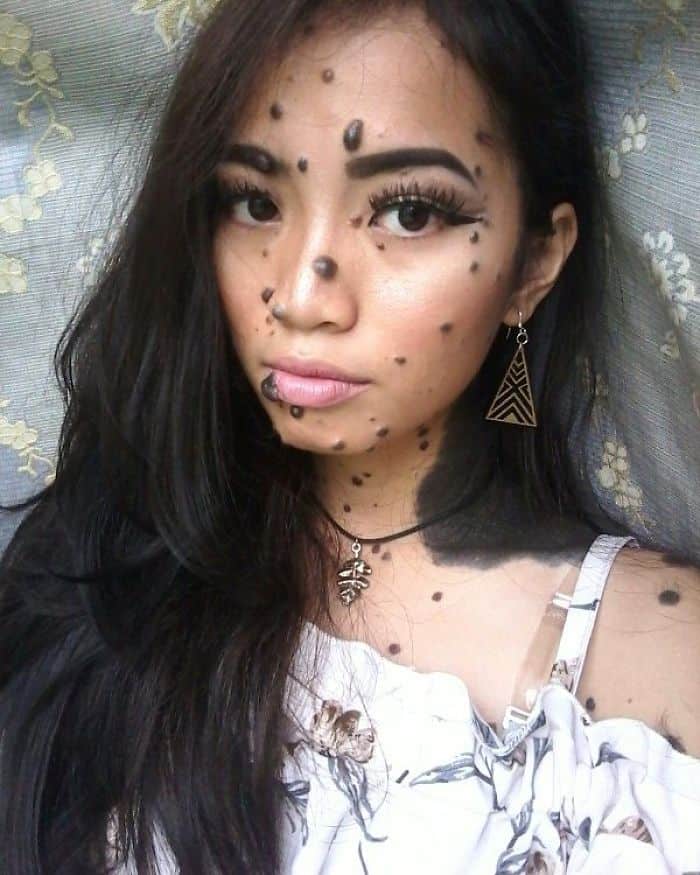 Evita Patcey Edgar Delmundo was born with hairy dark brown moles and birthmarks covering her entire body, but they never caused her health issues. However, Delmundo was bullied as a child, and her classmates used to call her “monster” and “chocolate chip cookie”.

This Malaysian woman had a challenging time accepting and loving herself, but that all changed after attending a church camp. After that, Delgado even participated in the Miss Universe Malaysia 2018 contest to prove that beauty has more forms than society dictates.

In the Inquisition era, people believed that the Devil placed a special mark upon his human brides, the witches. These were moles or birthmarks, and people claimed it made women insensitive to pain.

7. Hairy Birthmark Under the Right Eye 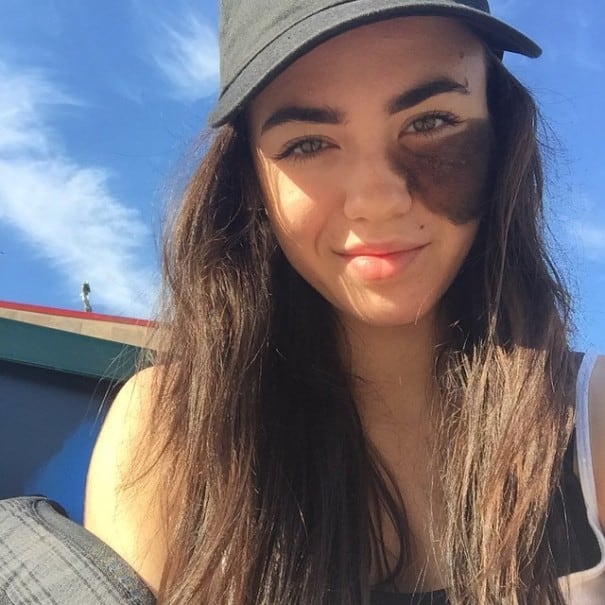 Cassandra Naud is a Canadian actress and dancer but is best known for her unique face feature – a dark brown birthmark under her right eye. Naud has a rare condition called hypertrichosis that causes excessive hair growth on different body parts.

Even though Naud’s parents had an option to remove her hairy patch, the doctors said the surgery would likely leave a large scar. However, the actress is happy she has the birthmark because it’s a part of her identity.

It’s a common practice in Japan to forbid pregnant women to look at a fire or into flames while pregnant. Otherwise, they believe the baby will be born with a burn mark, known as a mole. 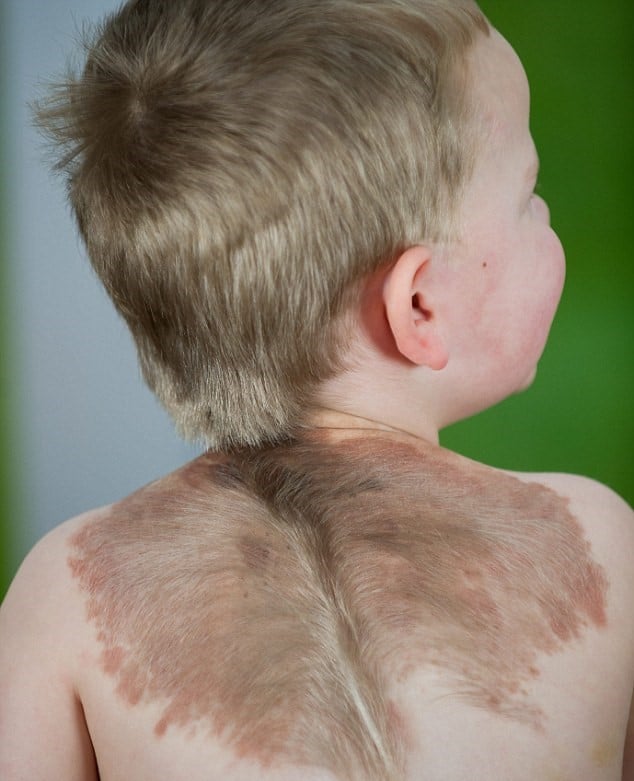 Oliver Brown was born with Congenital Melanocytic Naevi (CMN), a condition that causes oversized moles or birthmarks and affects only one person in every hundred. Although Brown is a healthy boy, he needs to go to medical checkups every three months.

CMN equals an increased risk of the most aggressive forms of skin cancer. This condition could also spread to the brain or spine, which could cripple Brown’s nervous system.

According to popular worldwide belief, birthmarks indicate how a person died in their past life before being reincarnated. The shape, color, and position of these skin marks are associated with fatal wounds (e.g., circular marks imply bullet shots). 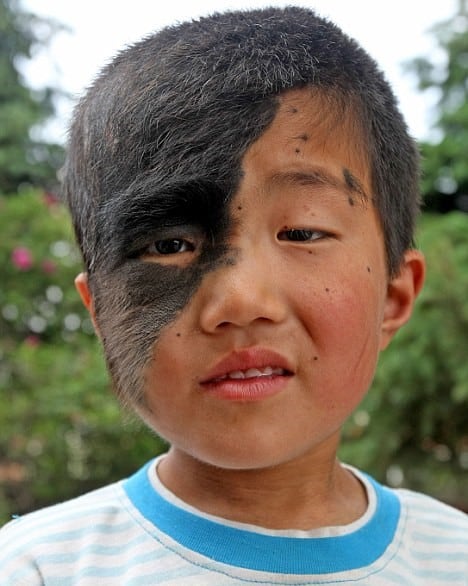 An Qi was born with a rare condition that caused the hair to grow down one side of his face. As he got older, the hair got thicker and more prominent.

The boy suffered throughout his childhood due to bullying and felt isolated and lonely. A local plastic surgery hospital offered free surgery to remove his birthmark in 2011. But no information regarding the procedure outcome is available.

According to history, people considered the second wife of King Henry VIII, Anne Boleyn, a witch because she had a prominent birthmark on her neck. Some sources also claim she had many moles throughout her body, causing others to distrust her and portray her as a woman with a bad character.

4. Birthmark on the Back that Spreads

Type: Mole
Cause: Likely a genetic disorder
Body Part: Throughout the body 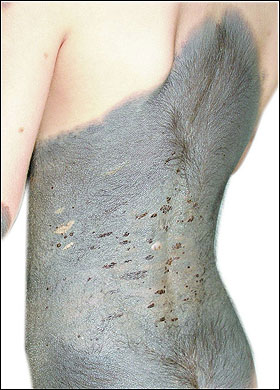 In 2009, thick grey hair started growing uncontrollably over the body of a six-year-old girl from China called Li Xiaoyuan. The doctors couldn’t explain her condition but believed the cause might be a genetic disorder.

Initially, Li Xiaoyuan had a mole on her back, but it spread until it reached her limbs and face. Even though the medics wanted to remove her moles, they feared she could suffer from post-surgery hemorrhage.

Not all beliefs about birthmarks are negative. For instance, some Eastern European countries believe that touching a person with a mole brings good luck. 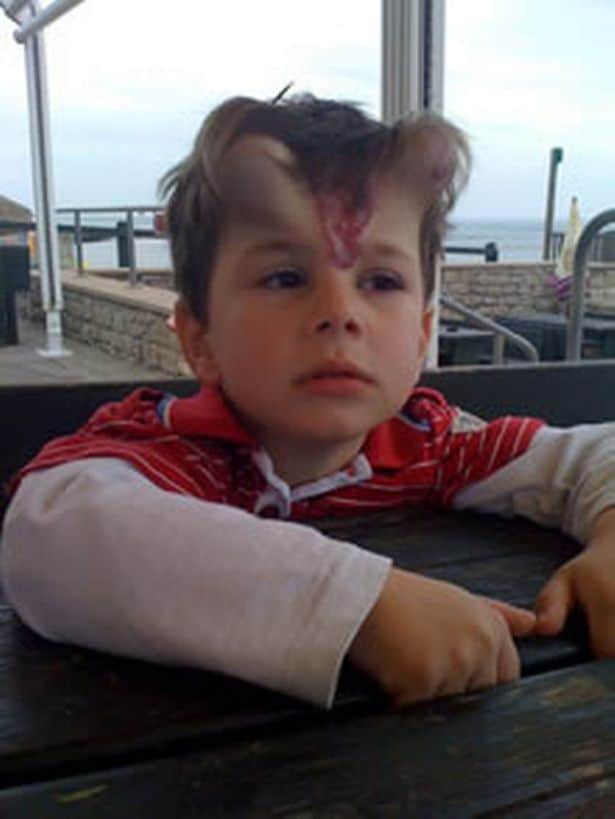 George Ashman was born with a bright red birthmark on his forehead, causing his mother, Karen, to worry about how other kids will treat him. But Karen didn’t know that the recovery would temporarily make things even more difficult.

The surgeons implanted horns into George’s forehead, hoping to stretch his skin. Luckily, the process had a positive outcome, removing the birthmark and leaving the boy with a hardly visible scar.

Approximately one in three infants are born with a birthmark. However, these skin marks are more prevalent in females than males. 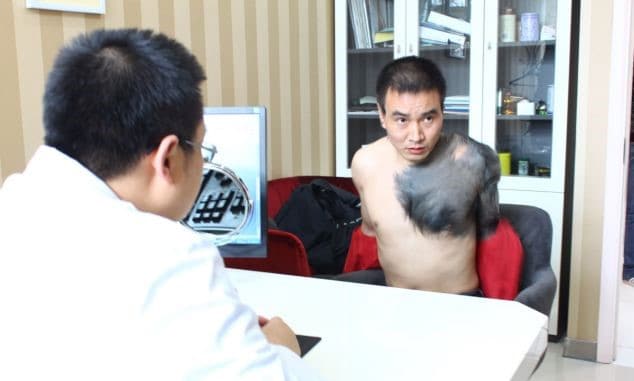 Zhang Hongming from South-West China was born with a rare disorder called a congenital pigmented nevus. The condition causes giant furred moles that are hard to remove.

Sadly, Zhang Hongming has suffered from bullying from an early age, as people used to compare him with chimps, monkeys, and beasts. However, Hua Mei Plastic Surgery Hospital offered free surgery to remove the mole, but no information is available about the outcome.

Although many people don’t see them as attractive, birthmarks are perceived as stunning in Kazakhstan. Kazakhs also have a name for particularly pretty birthmarks – mensly. 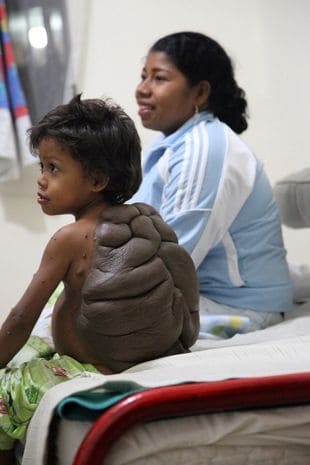 Didier Montalvo was born with one of the rarest birthmarks in the world. Kids used to call him the turtle boy due to having a large mole on his back resembling a shell.

Even though rare birthmarks affect one in 20,000 babies, a top surgeon said that Montalvo’s mole is the worst one he’s ever seen. However, the boy underwent successful surgery and can finally live a carefree life.

Even though most people believe only humans can have birthmarks, that’s not true. Animals also have moles but are less visible due to their fur.

8 Rarest Monster High Dolls Ever Made

9 Most Expensive Cruise Ships in the World