The loss of biodiversity is one of the gravest global concerns of our time. In the last 50 years, biodiversity worldwide has declined rapidly and has severely impacted our health and wellbeing.

Trees form one of the most valuable components of biodiversity. However, we failed to pay enough attention to the collapsing ecosystem and did little to preserve different tree species. As a result, many of them are now threatened with extinction. With the mounting burden on the ecosystem and selective exploitation of species, they are disappearing at an alarming rate. In fact, according to the latest estimate, more than 10% of the tree species are now considered vulnerable.

Here we list 9 of the rarest trees in the world. All these trees are listed in International Union for Conservation of Nature (IUCN) Red List of Threaten Species. Conservation efforts are being taken at different levels to protect these rare species. We hope this list will contribute to that effort. 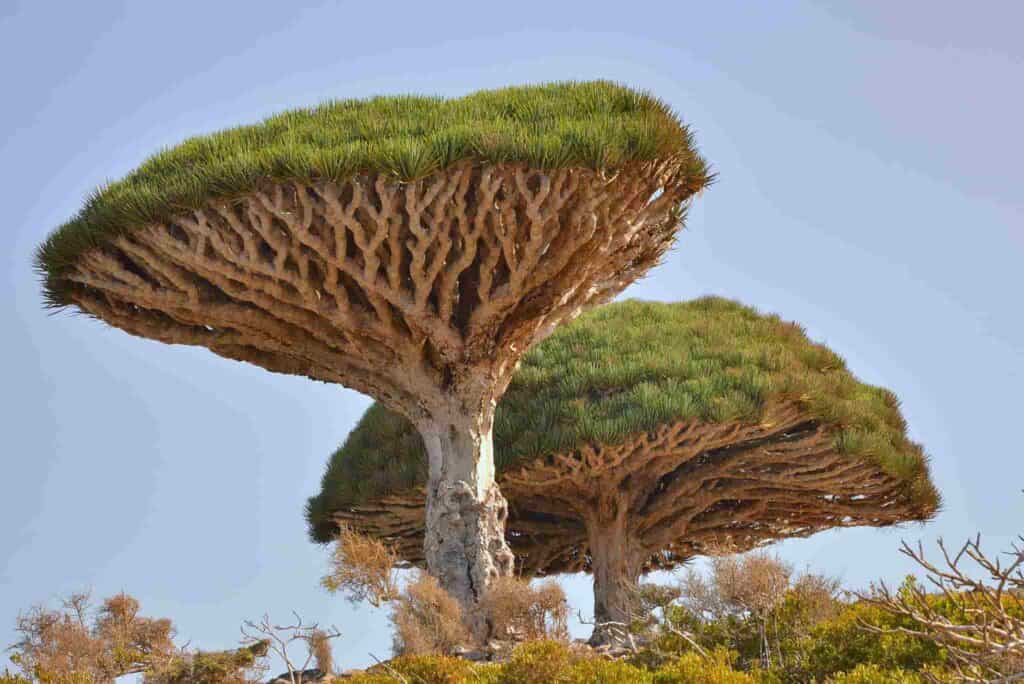 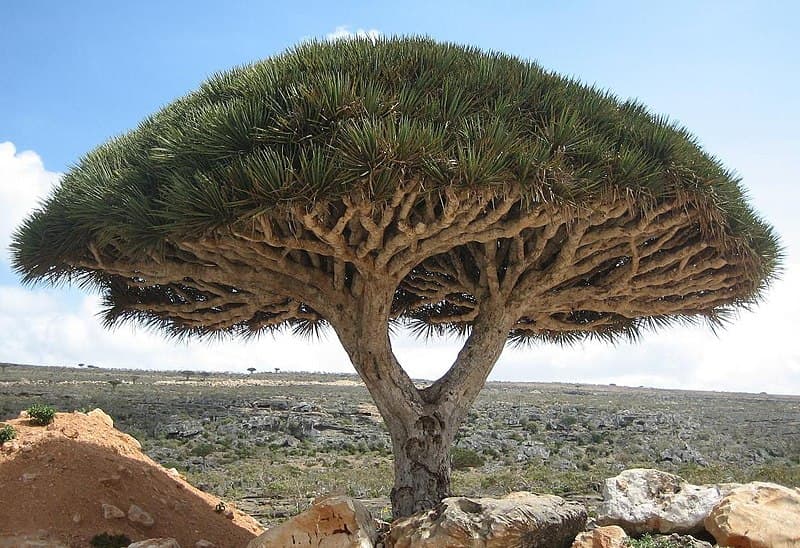 Dragon’s Blood is known for its unique appearance. The leaves are arranged in a way that the tree looks like an uprightly held umbrella. It has many branches, and leaves grow at the end of the branches, pointing upward. The tree produces a blood-red sap and hence the name Dragon’s blood. It has medicinal value and is locally used as a stimulant.
It is a drought-tolerant tree and can hold water for many years. The Dragon’s Blood trees are still out there in the wild; however, their existence is gravely threatened by the growing tourism industry and other developmental projects.

According to Yemeni legend, the first murder on earth took place on Socotra Island when Cain killed his brother Abel. The Dragon’s Blood tree grew from Abel’s blood, and thus, it is also known as Brother’s Blood Tree. 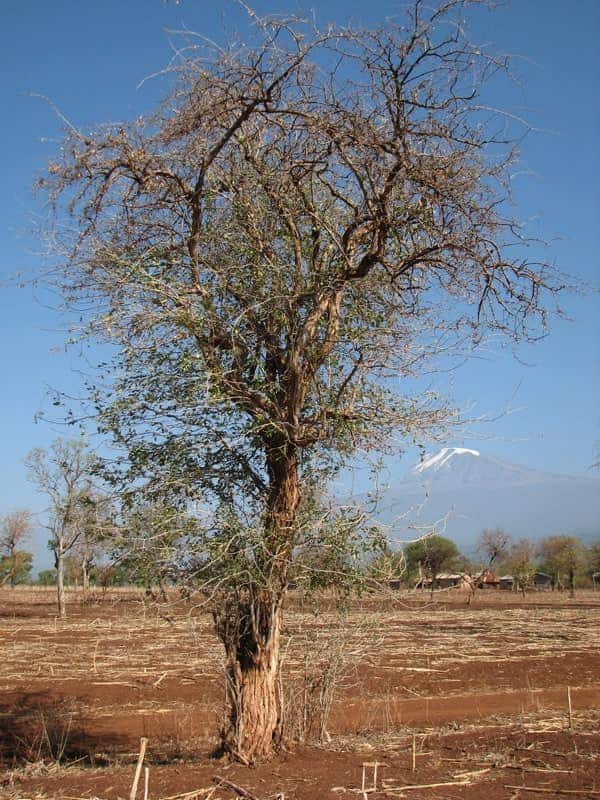 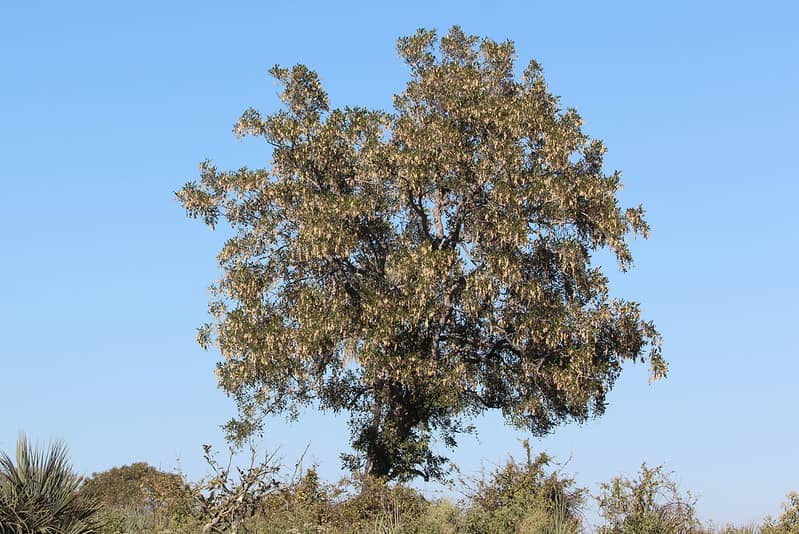 African Blackwood trees, locally known as Mpingo, can be found in 26 African countries, but the number is rapidly decreasing. These trees are grown in infertile and rocky soil and help improve the fertility of the land. It is a very slow-growing plant and takes 70-100 years to reach maturity. The trees are extensively branched and often are very gnarled and twisted.
The black heartwood of the Mpingo tree is one of the costliest timbers around the world. It is used for curving, as well as for making musical instruments and fine furniture. Due to its gnarled shape, it is difficult to find usable timbers, and 90% of the tree gets wasted.

The African Blackwood tree is an ancient species. Archeologists excavated Mpingo wood-made utensils in the tombs of Egyptian pharaohs. 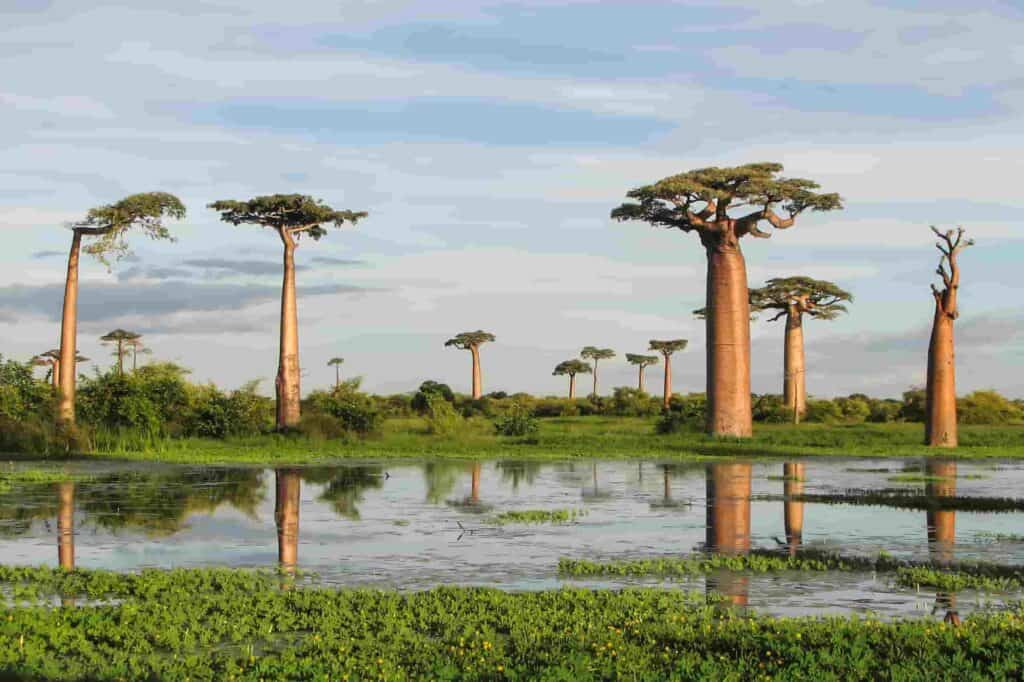 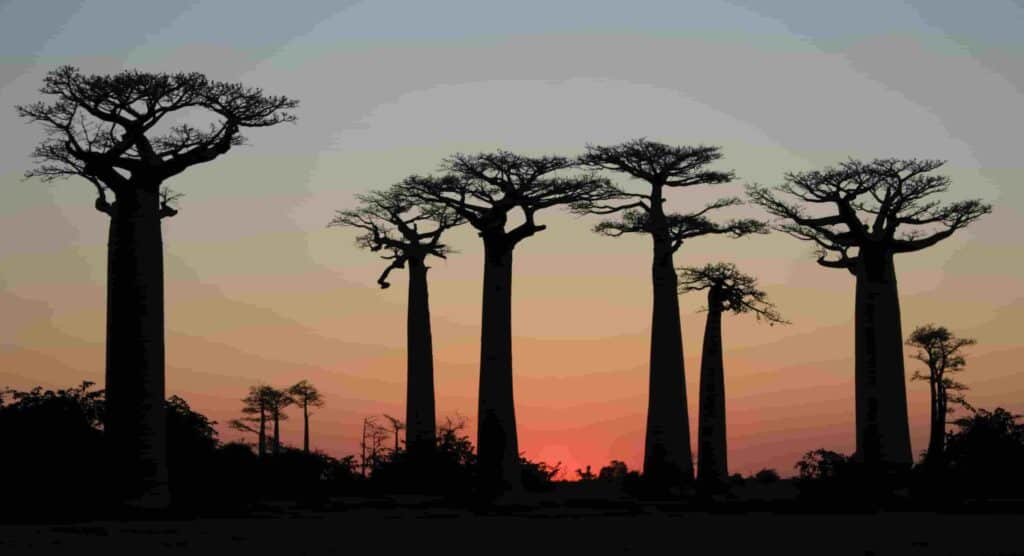 Grandidier’s Baobab is an iconic tree grown in the southwestern part of Madagascar. The tree is locally known as Renala, meaning Mother of Forest.
These gigantic trees can be as tall as 100 feet and have thick bulging trunks. The diameter of the trunk ranges from 30 to 50 feet.
The fruit is called monkey bread which is usually more than one foot long. These trees can survive thousands of years, but climate change and the rapid expansion of agricultural land have threatened their existence.

In the past, the locals would use the naturally hollow trunk of Grandidier’s Baobab tree as prisons, stables, and even burial sites. Now, the hollow or excavated trunks are used as water reserves and short-term shelters. 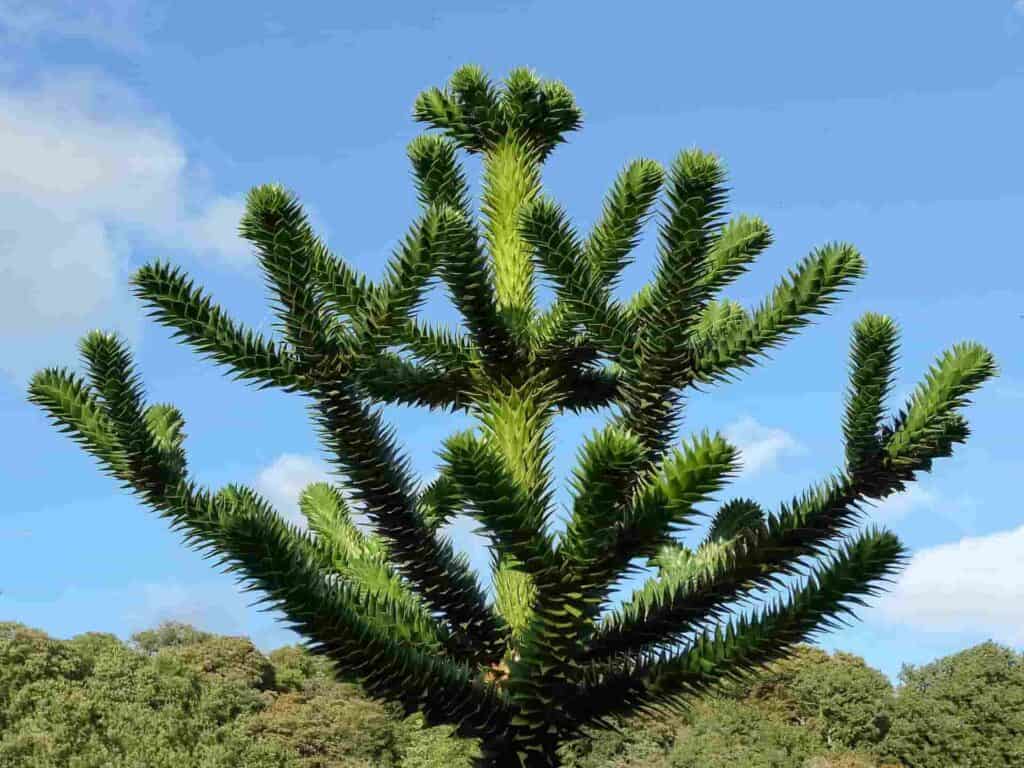 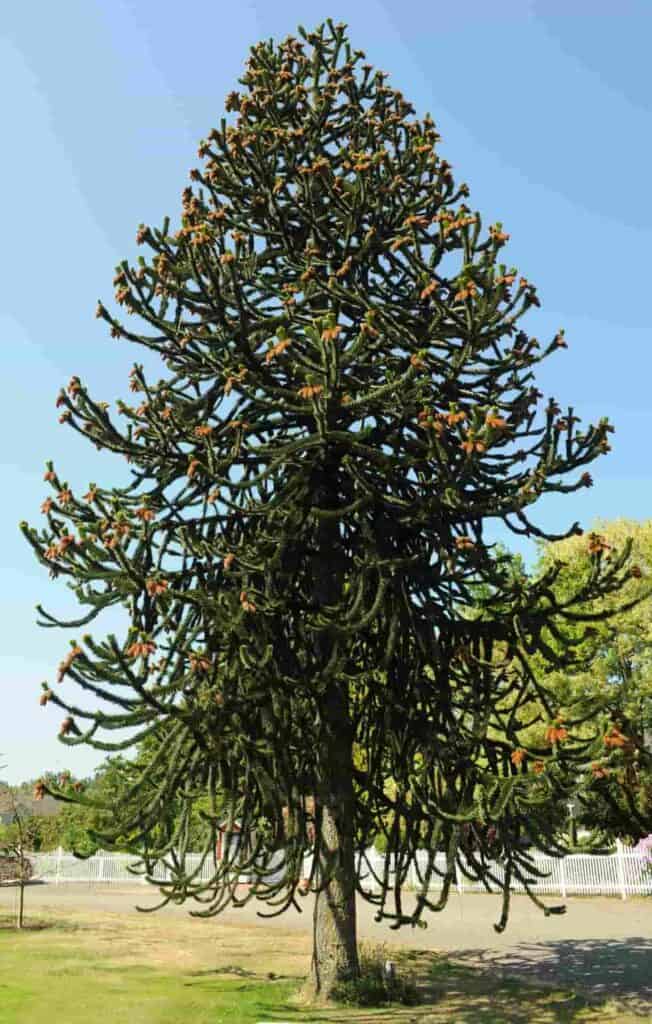 The Monkey Puzzle is the national tree of Chile. It is a coniferous tree with a Christmas tree-like leaves arrangement, and as it grows, it forms a canopy of leaves. The trunk is straight and can grow up to 30 feet.
The Monkey Puzzle tree is believed to have survived for more than 200 million years. Currently, the main threat is logging and anthropogenic fires. In an attempt to preserve the tree, logging had been made illegal. However, illegal logging, seed collection, and animal grazing continue to threaten this ancient species.

Monkey Puzzle tree is often called the ‘living fossils’ as they have remained almost the same for millions of years. 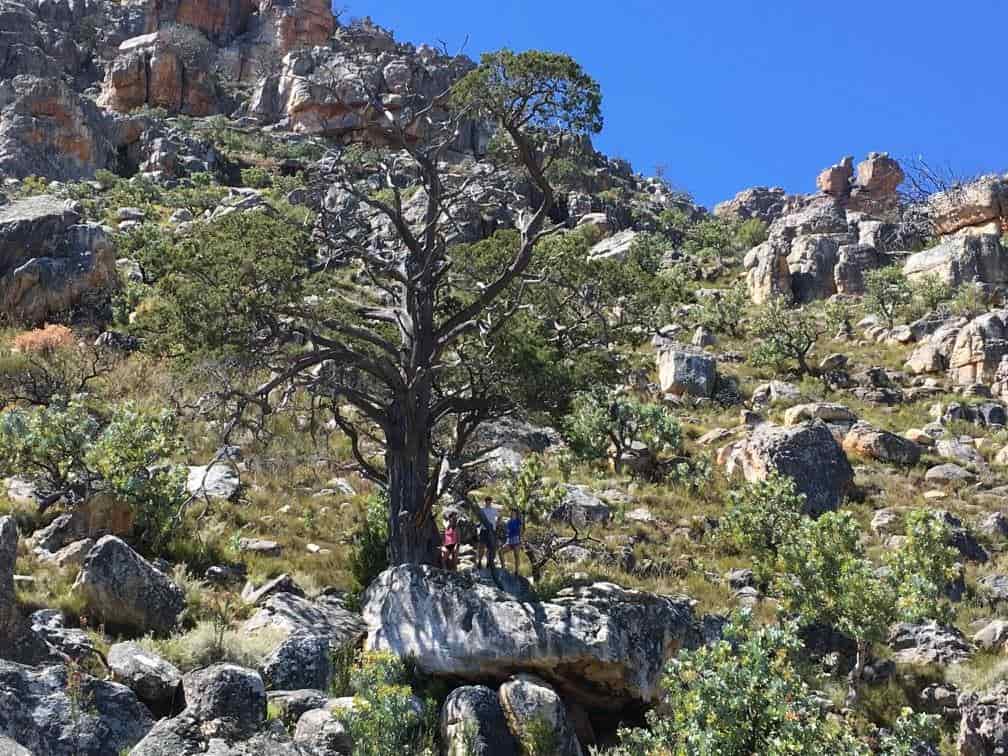 Cederberg Mountain gets its name from the Clanwilliam cedar tree, as once the entire area was covered by this tree. These trees are extraordinarily long-lived, and some of them are more than 1000 years old.
The woods are light yellow in color and have a distinct fragrant scent. The durable timbers were once used for making furniture, telegram poles, and even ships.
According to records, by 1883, all the accessible Clanwilliam cedar trees were chopped for commercial purposes. Now, it is confined to a 250 sq. km area, and the species is on the brink of extinction.

Clanwilliam cedar tree originated some 225 million years ago and survived the ice age.

Bastard gumwood used to grow in numbers in the tropical forests of the South Atlantic islands of Saint Helena. British colonized the island in the 17th century and heavily exploited the area for timber, fuel, and plantation. The remaining trees were further damaged by plant species and overgrazing of animals like goats and pigs.
The Bastard Gumwood trees have countless branches and crooked trunks and look very similar to another endangered species of this area called Saint Helena Gumwood. However, they are shorter, and the height of a mature tree is about 9 feet. The flowers are whitish and turn brown as they age. The flowers bloom in clusters between the leaves.

This species was thought to be extinct by the end of the 19th century. However, in the 1980s, two individual trees were found, and only one of them survived. Now, as a part of conservation efforts, they are hand-pollinated and kept in a cage. 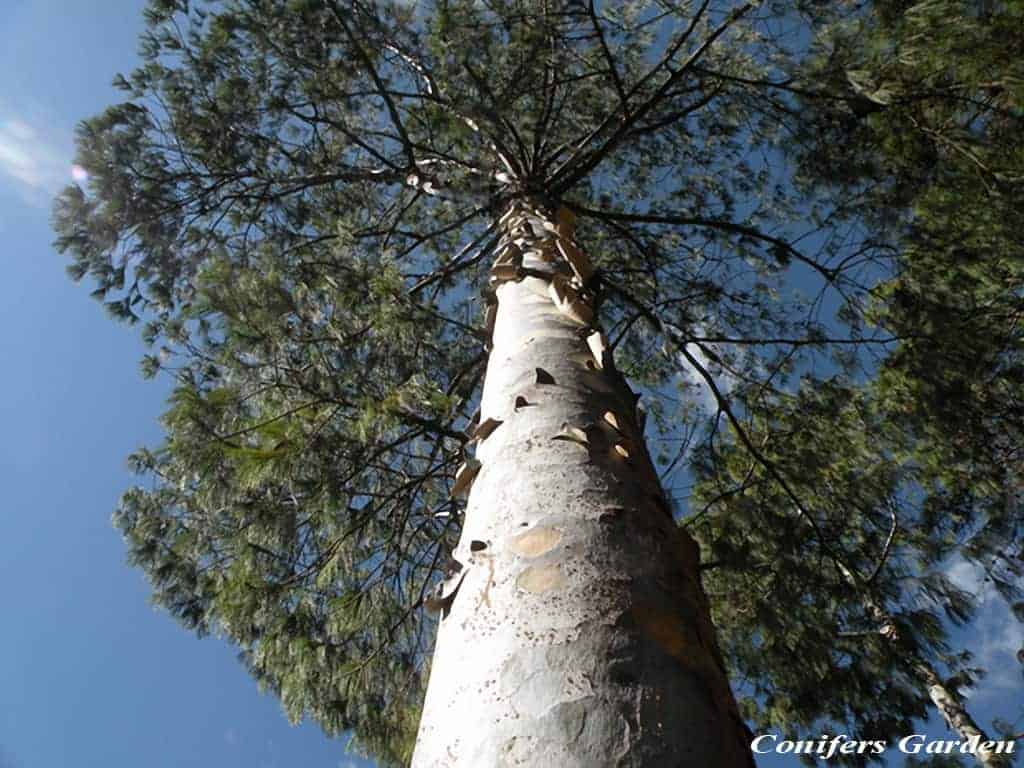 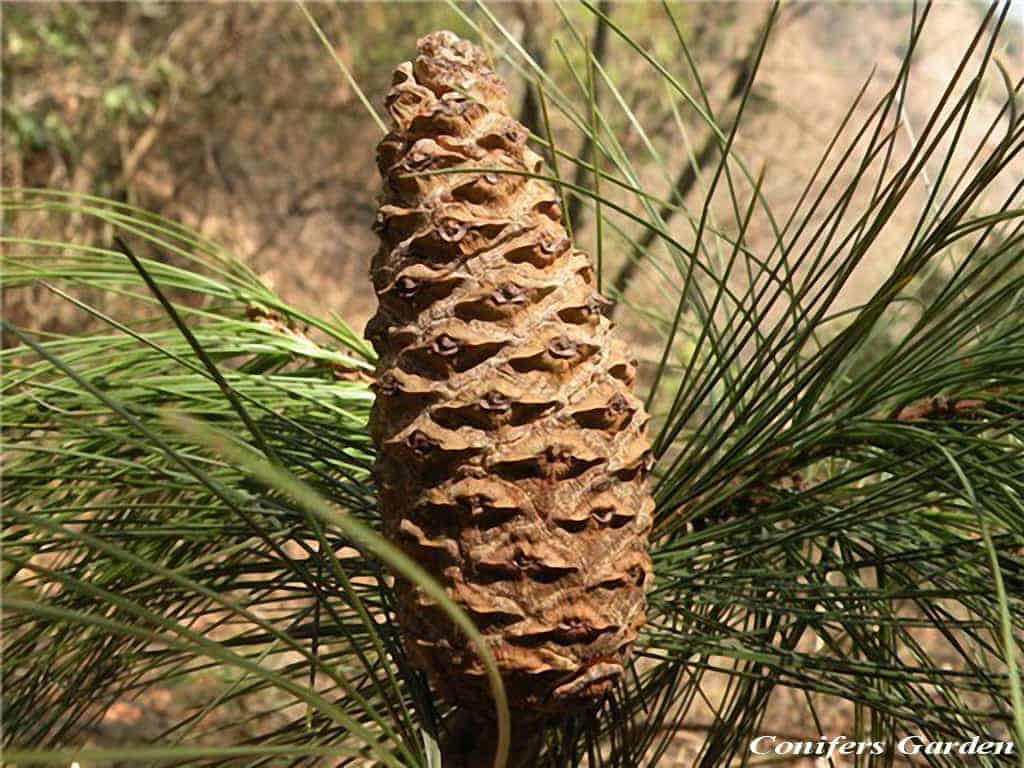 Many consider the Qiaojia pine to be the world’s rarest pine. Currently, there are only 20 trees remain to exist on the mountain slope of Qiaojia County, Hunan.
Fully mature specimens are yet to be recorded; however, it is believed that a full-grown tree can be as tall as 100 feet. Qiaojia pine was thought to be extinct in the wild until this current population was discovered.
It has drooping glossy green leaves of around 3.6 to 6.8 inches. They are slender and white bands on the inner face. The seed cones are green and turn reddish-brown once they are ripe.

Qiaojia pine is a naturally rare species and is currently confined within one isolated community. Thus, any genetic or climate event can completely destroy it. 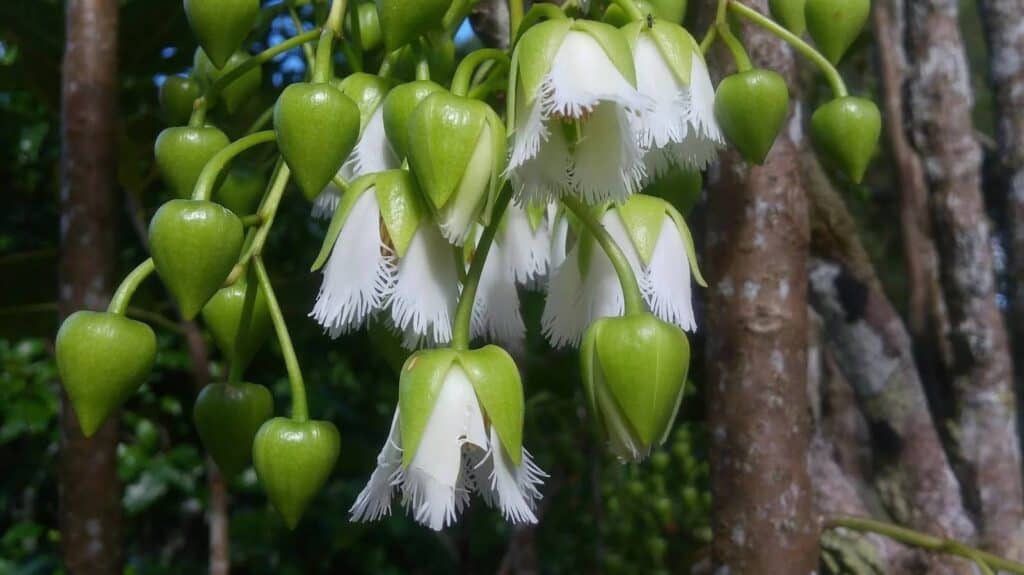 Bois Dentelle or Lace Wood is one of the most endangered trees in the world. Only two specimens of this beautiful flowering plant exist in the wild. A few years back, Mauritius Government has transferred one of them to a nursery in an attempt to save this species. The effort was successful, and several saplings have been cultivated.
The tree requires constant moist weather conditions with medium exposure to sunlight. The petals of its white flowers are lacy with fringed edges, and the plant blossoms from July to September.

The main reason behind the peril faced by Bois Dentelle is climate change. It can only grow in the weather condition of cloud forests, and the earth is losing its cloud forest cover at an exponential rate. 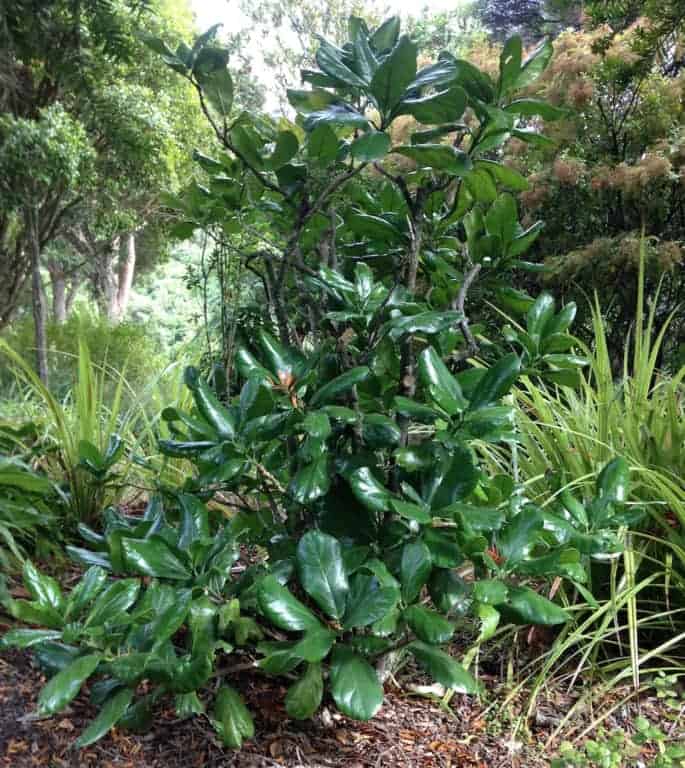 Three Kings Kaimako is known to be the rarest tree on the earth, as there is only one tree exists in the wild. In 1945, Professor Geoff Baylis discovered it on the scree slope of the Three Kings Islands.
This female tree didn’t produce any seeds for decades until human intervention took place. After several trials, scientists found a way to polianite the tree and grow seedlings. Conservation efforts are still in place, and the tree is now cultivated on farms.

Pennantia baylisiana made its way to the Guinness Book of World Records as the rarest plant on the earth.

8 Most Expensive Aircrafts Ever Built

8 Most Expensive Wheel Rims You Can Buy