The most expensive fruits, whether bought as classy business gifts or to be enjoyed on their own merits as some of the most well-cultivated food in the world, can reach insane prices per pound. At the top, Japan reigns supreme in crafting the most out-there expensive, beautiful cultivars of fruit.

These genetic hybrids are grown under careful conditions to deliver the most precise flavors and refined shapes imaginable. Keep reading for our list of the most expensive fruit in the world. 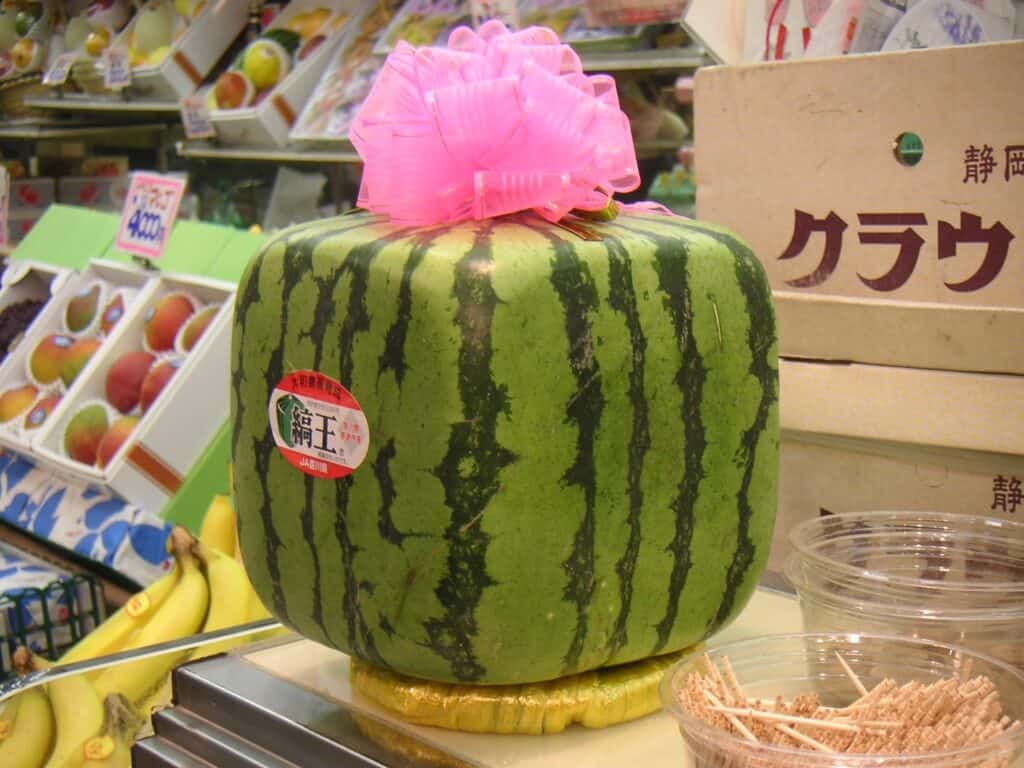 Square watermelons, like many fruits on this list, sell as luxury gifts in Japan. A single watermelon can cost $200, which equates to around $14 per pound. They are grown in specially designed boxes that coerce the watermelons into the shape of a cube. This makes them easier to cut and store in fridges since they don’t roll.

They were created by a graphic designer named Tomoyuki Ono back in 1978 and debuted at an art gallery in Tokyo. Since then, they have remained popular gifts and ornaments in Japanese households.

Other shapes of watermelons now exist using similar methods, such as hearts. Unfortunately, to achieve their iconic look, Square Watermelons must be harvested before they’re ripe, making them basically inedible. 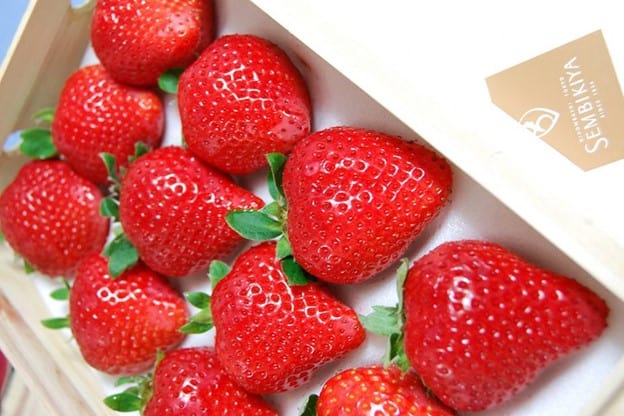 Sembikiya Queen Strawberries are also known as Nyohou Strawberries. They are named for Tokyo’s venerated fruit vendor, Sembikiya, which has been around since 1834 in its Tokyo location, as well as 13 others throughout the city and its outlying districts.

These strawberries come in boxes of 12 and cost the equivalent of 85 USD in Japanese yen. Using the average weight of a strawberry, this equates roughly to $214 per pound, though that number could vary between boxes.

Sembikiya knows that these berries are intended as luxury gifts, which is why they are grown in elevated growing areas that never touch the soil and hand-selected for color and shape.

Since ancient times, gift-giving has been a central aspect of Japanese culture. People give gifts to those that they feel indebted to (literally or not), often twice a year, in July and December. It is an expression of gratitude and hospitality but also deference.

This is why Japan features so prominently on this list. Fruit is a common gift and the prettier the fruit, the more gracious the gift. 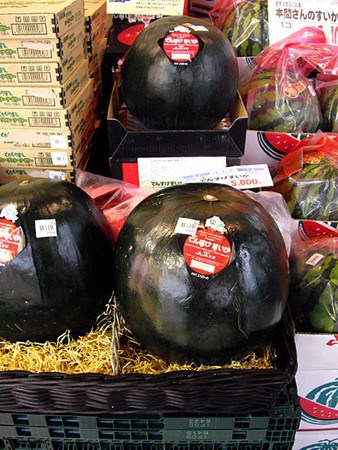 Densuke Watermelons are expensive fruits known for their black, crisp rinds and incredibly sweet pulp. People who hate watermelon seeds will be happy to know that this breed has almost none. They are grown in Hokkaido, Japan and maintain high demand due to exclusive cultivation conditions that create a limited supply.

Each melon can cost $250 per pound – a couple of them sold at one particular auction for $6,000. Each is sold in an individually labeled cardboard box

The price of these melons depends not only on the size and apparent quality of the melons but also on the quality of their cultivation. After months of careful growing, they are sold in limited quantities from the island of Hokaido in auctions across Japan, often to be given as expensive gifts. One of the things that keeps demand for the melons high is the large amount of space required to grow each one. 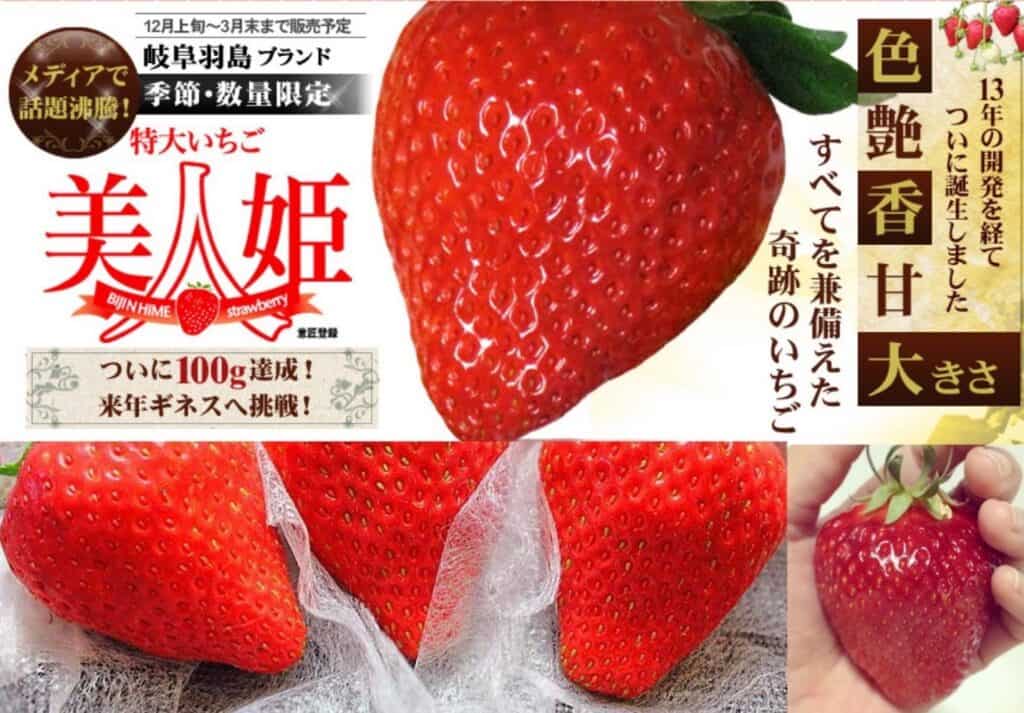 Bijin-hime or “beautiful princess” strawberries can grow as big as pool balls and weigh over 100 grams each. They are juicier, sweeter, and more fragrant than any strawberries in the world. Okuda Nichio, the creator of these strawberries, spends 45 days growing each berry and produces about 500 per year.

This is how his limited production has acquired so much attention from luxury fruit customers, who are always looking for beautiful gifts. A single, particularly large Bijin-hime strawberry has sold for a record-breaking 50,000 yen, which is the equivalent of about $1,993 per pound.

The Brix value is a factor that measures how much sugar has dissolved in liquid. It can be used to measure the sweetness of fruit. While a normal strawberry has a Brix value of 10%, maximum, a Bijin-hime strawberry can have as much as 15%, making it 1.5 times as sweet as the sweetest strawberry you’ve ever had. 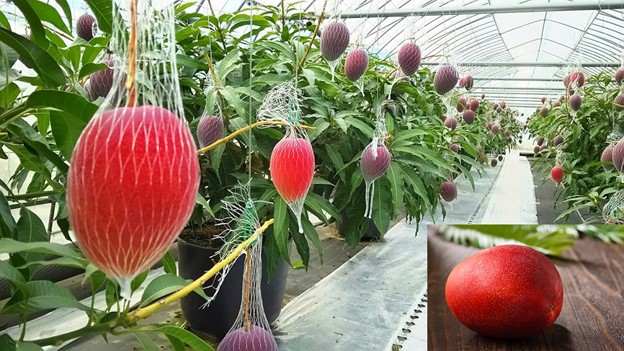 Another addition to our journey into Japanese fruits is the Taiyo no Tamago or “Egg of the Sun.” It’s a mango grown in Japan, particularly in the Miyazaki prefecture. They usually cost around $50, but the price varies wildly based on the condition of the fruit since the fruit itself isn’t that rare. Since first being cultivated in Florida in the 1940s, these mangoes, more prevalently known as Irwins in most places, usually sell for a few bucks.

But in Japan, cultivating this breed of mango is an art. Their careful method results in juicy, fibrous, tender, and sweet fruit. They are often given as gifts in business transactions, holidays, social gatherings, and other occasions. Perfectly bred Egg of the Sun mangoes can sell for 250,000 yen apiece, such as at one auction in the Miyazaki prefecture in 2019, which equals around $2,916 per pound.

Farmers in Japan take pride in caring for these fruits with meticulous, time-honored strategies. They enrobe each fruit in a net that makes sunlight hit the mango evenly across its whole skin, as well as protecting it when it drops. To guarantee perfect, natural flavor, the farmers let the fruit fall naturally rather than picking them from the tree by hand. 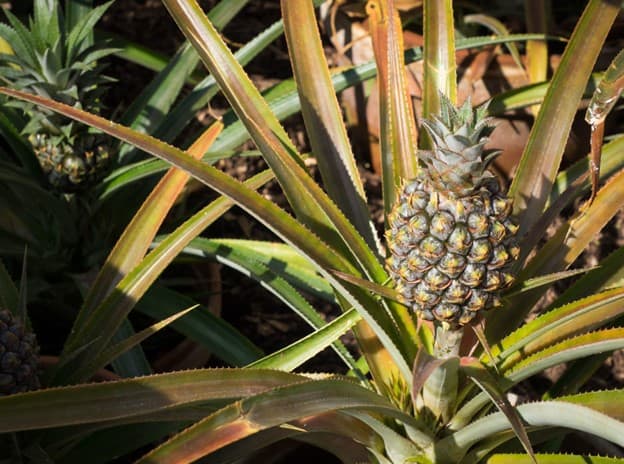 The English gardens known as Heligan are an antique, revered piece of land. After WWI, the gardens were thought lost and unusable. Yet, a team of 15 that oversees the land now gardens Heligan Pineapples, which are the most exclusive pineapples on earth, and reminds the world how valuable they used to be.

In ancient times, pineapples were symbols of great luxury, a prickly signpost to the upper classes. Those who farmed pineapples likely never got a chance to taste them as they became insanely expensive gifts for fabulously wealthy people. Heligan Pineapples, which are of the Smooth Cayenne variety, return some of that luxury to the modern day by selling for as much as $7,500 per pound.

For climate reasons, pineapples can’t grow in England. This is why Heligan Pineapples are such a rarity there and why they require such extreme and specific conditions to cultivate. To recreate the tropics in the United Kingdom, Heligan Gardens constructs wooden pits that are kept constantly warm by horse manure, which sends hot air through vents that keeps the pineapples disillusioned about the region of the world they’re in.

Supposedly, these carefully controlled conditions create pineapples that taste as good as those grown in the most well-respected farms in the tropics. 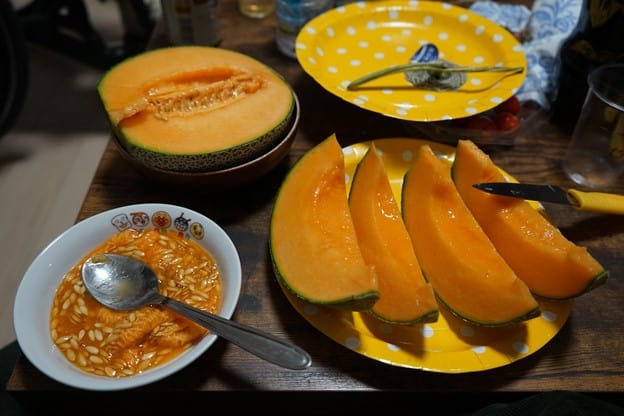 The cantaloupe cultivar called the Yubari King Melon or just Yubari King is a Japanese creation, grown on the island of Hokkaido. An ideal Yubari King is completely round. Unlike a cantaloupe, the rind is totally smooth. It’s actually a hybrid fruit crossed between two melons: Burpee’s Spicy Cantaloupe and Earl’s Favourite cantaloupe.

The listed price is an approximation based on the most expensive Yubari King Melons ever sold at time of writing, which was a pair of them bought by Tokyo’s Pokka Sappora Food & Beverage Ltd. for 5 million yen. This equals approximately $8,743.10 per pound of melon.

A cultivar like the Yubari King Melon is a plant that has been bred for specific traits that are considered desirable. This includes red roses bred for their shape and color. These melons were bred for their smooth rinds, round shape, and delicious, sweet taste. 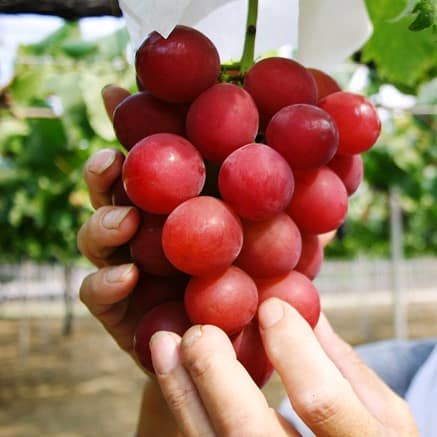 The most expensive fruit is the Ruby Roman Grape. These grapes are grown in Japan for their size, shape, and color. Their ruby redness, their size of around 20 grams per grape (4 times a normal grape), and their sweet taste is all graded by professional vendors to determine the final price. A normal bunch of Ruby Roman Grapes can sell for $450.

The reason they top this list is that they have recently started going up for auction and in 2020, a single bunch of 30 Ruby Roman Grapes sold for $12,000. That means that each grape cost $400 apiece.

Last year, only 25,000 bunches of grapes were deemed worthy of being called Ruby Roman. Only one or two of these becomes premium, which makes them valued at over $1,000 per bunch. Only greenhouses in the Ishikawa prefecture in Japan are equipped to grow these grapes.

Due to Japan’s long-standing cultural traditions of using fruit as luxury gifts, they dominate the world in terms of breeding and selling the most expensive fruit. All but one fruit on this list hails from there. So if you want to experience the most that fruit has to offer, you’ll have to make your way over to the Nihon.