8 Most Expensive Bonsai Trees Ever Sold

Bonsai (in Japanese it means, “tray planting”) is actually a Japanese version of the ancient Chinese art of penjing. The trees are not only pruned to appear large at smaller sizes, but the artist also uses sculpted scenery and artisan tree containers to create little scale dioramas. 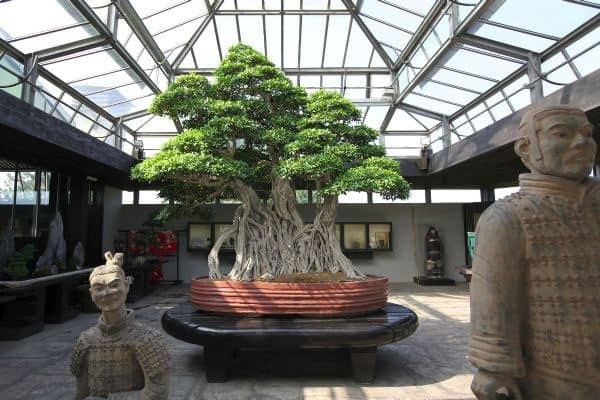 Known as the oldest bonsai tree in the world, the Ficus Retusa Linn is also one of the rare luxury bonsai on this list not displayed in Japan. This tree is in a display room at the Crespi Bonsai Museum in Italy after the owner of the museum, Luigi Crespi, worked for over a decade to buy the tree.

It was made in China, rather than Japan, so it might be more accurate to call it a penjing tree, which is the Chinese version of bonsai. The tree is estimated to be worth $91,000 and was displayed in the museum’s most treasured room, a glass pagoda fully lit by sunlight, until it was reported stolen in 2019.

Though the tree was originally grown by Chinese artisans, it was pruned by the Japanese bonsai master Shotaro Kawahara after getting to Italy. 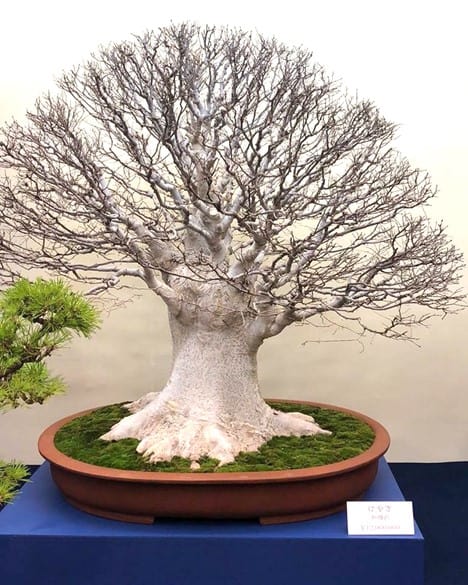 Kimura’s Zelkova Bonsai is one of the most famous examples of the art due to its unique appearance. It is currently on display in the Omiya Bonsai Village, overseen by its grower, Mr. Masahiko Kimura, the famed bonsai artist.

The Zelkova Bonsai has iconic grey bark and immaculately symmetrical growing patterns that define the Omiya village’s 90 years of bonsai artistry. This particular bonsai is worth $106,000 and is one of the prides of the gardens there.

Masahiko Kimura was born in 1940. He lost his mother in 1951 and at her request became an apprentice to master Motosuke Hamano, the master bonsai artist of the Toju-en Bonsai Garden. He did this for 11 years before becoming a master in his own right.

He has become famous for his sculptural techniques in not only treating the bonsai but also carving the wood of the trees. He has become famously known as the “Magical Technician of Kindai Shuppan,” though he has expressed that he disagrees with the use of the word “magical.” 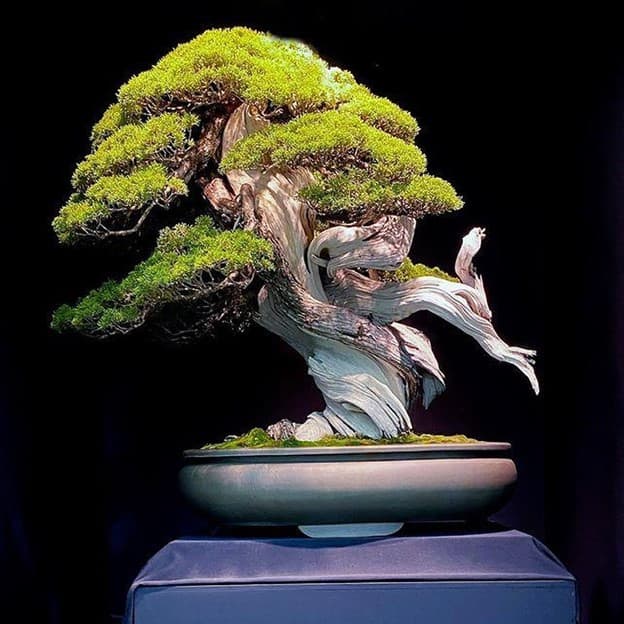 The Taikan-ten Bonsai exhibition in Kyoto is one of the biggest celebrations of bonsai in the world. This Sargent Juniper bonsai tree sold for $350,000 at an auction there.

The Taiken-ten exhibition happens every year in November, displaying not only bonsai but also the scrolls and suiseki that go with their traditional display techniques. The Prime Minister Award is given to the best bonsai of the year, including this amazing Sargent Juniper bonsai.

The Sargent Juniper bonsai is arguably the most famous breed of bonsai and has the iconic profile that defines the art. This is because the Sargent Juniper tree is comparatively easy to prune using the traditional techniques.

The first 50+ bonsai that went on display when the National Bonsai & Penjing Museum opened in 1976 were all Sargent Junipers. The museum even uses the tree as its logo. 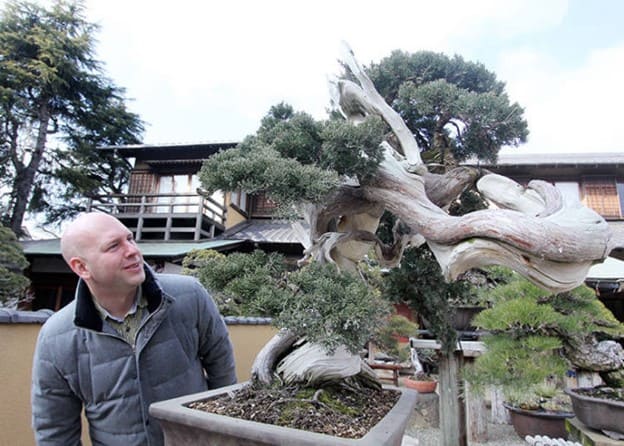 A gorgeous Five Needle Pine bonsai was sold at an auction for $600,000 in Japan. Most of this breed of tree lasts for hundreds of years and this one was no exception, estimated to be around 300 years old.

The Five Needle Pine is a sought-after bonsai tree because of its incredible growth. Gaining nearly two feet of height per year, it is one of the fastest growing of any bonsai. As a comparison, the average bonsai tree grows around 17 inches per year. Some, like the Jade bonsai, grow as little as 2 inches every year!

The Five Needle Pine is also known as the Ulleungdo white pine. The tree normally grows up to 25 meters in height and gets just as broad. It’s a coniferous evergreen with needly leaves in bunches of five. It’s famous for its broad crown and small flowers. 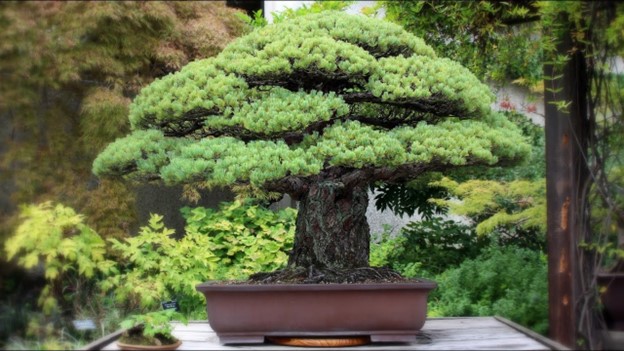 This Yamaki pine bonsai’s age may not be the highest on this list at 392 years, but its value comes from its beauty and history. In 2001, we learned about this amazing bonsai, which was shipped to the United States in 1976 by Masaru Yamaki as a gift from Japan to celebrate America’s 200th anniversary.

The National Arboretum now houses this incredible tree, which now includes information about its history (see below) provided by Yamaki’s grandchildren when they last visited.

The tree’s value is estimated to be around $1 million, though it has not been sold since being received by the Arboretum.

The most amazing thing about this tree is that it was in Hiroshima when the atomic bomb dropped in 1945. A Japanese news crew shot footage at the destroyed Yamaki Nursery after the bomb had dropped. The tree can be seen still standing in the background. 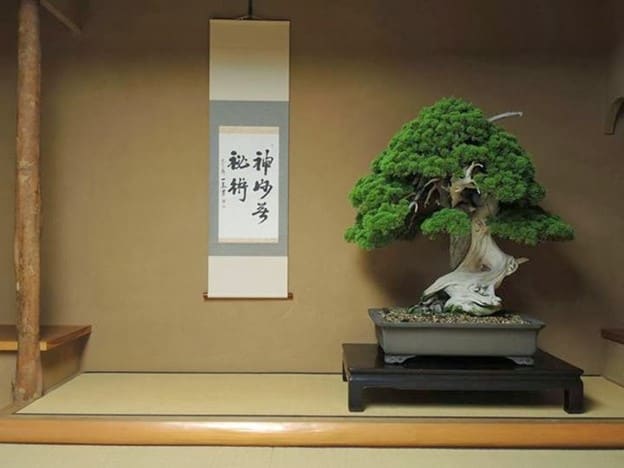 One of the oldest trees on this list is a white pine bonsai grown and owned by the man known as Master Kunio Kobayashi in the Shunkaen Bonsai nursery in Tokyo. Kobayashi has won Japan’s Prime Minister Award four times now and this tree makes it easy to see why.

This bonsai, which is estimated to be over 800 years old, is displayed at the nursery in its luxurious yet understated tokonoma. It was bought for the museum by Kobayashi for $1.3 million, making it one of the world’s most expensive bonsai.

Kunio Kobayashi has been practicing bonsai for 30 years and is now a master with a prestigious bonsai school, opening the Shunkaen Bonsai Museum in Tokyo. He has been around plants all his life and vowed to study the art of Bonsai at the age of 28, after seeing a white pine bonsai in exhibition.

His museum now houses over 1,000 incredible trees and 200 apprentices and international students who study this ancient art. 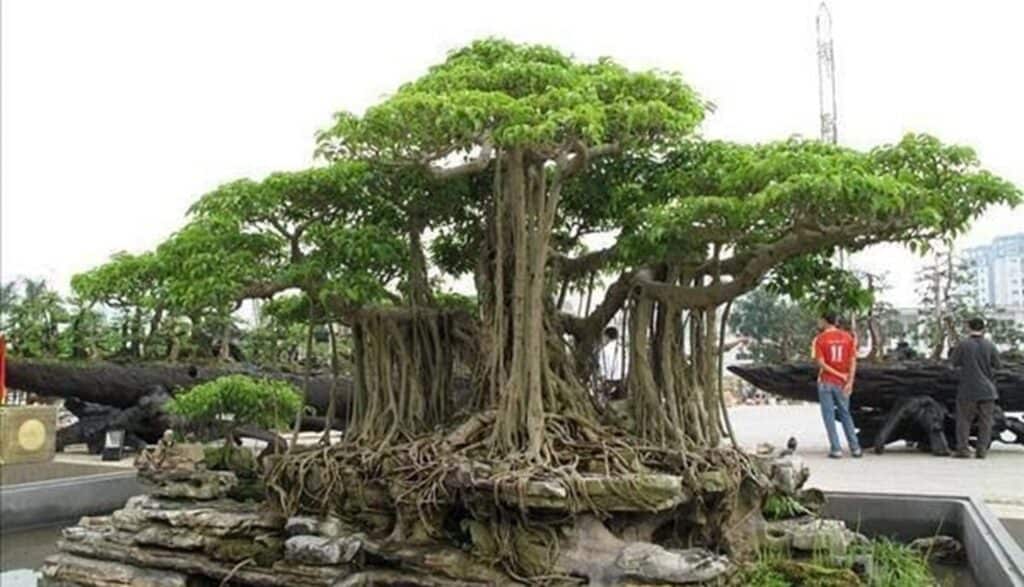 This Ficus Ginseng bonsai has to go on the list even though its true value has never been officially discovered. This tree in Vietnam has a rumored value in the millions (maybe even over $2 million), but its collector has never allowed it to be evaluated for its age or price.

Ficus ginseng often sells for a lot, with one 500-pound example selling recently for $60,000. Even on eBay, there are Ficus ginseng bonsai going for thousands.

The Ficus ginseng is actually a fig tree native to Southeast Asia, also called the banyan fig and Taiwan ficus. It’s distinguished by thick roots that grow in a structure that stays above the ground, as well as oval leaves and a reddish-grey striped trunk.

While in the ground, a Ficus ginseng appears to be standing on thick little root legs, which is especially true of the bonsai derived from them. 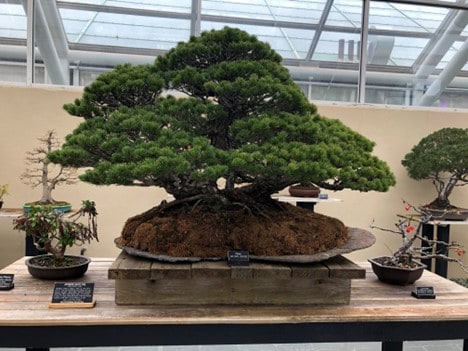 The tree was only 250 years old, so not the most antique on this list but certainly one of the finest specimens.

While it isn’t for sale, a Juniper Bonsai tree at the Mansei-en Bonsai nursery is considered one of the oldest in the world, estimated to have been planted over 1,000 years ago.

The nursery is run by the Kato family in Omiya, Japan. Family legend has it that their ancestors found the tree in a forest and began nursing it, passing it down to their descendants until this millennia-old tree made it to the present day.

9 Most Expensive Office Chairs You Can Buy

8 Most Expensive Nuts From Around the World