8 Most Expensive Whiskeys Ever Sold

All Scotch is whiskey but not all whiskey is Scotch (Scotch only applies to the drinks distilled in Scotland). The whiskey represented on this list includes not only the famed Scottish pedigree but the best of the best from distilleries all around the world. These drinks are the whiskey all-stars.

This list of the 8 most expensive whiskies in the world contains only the oldest, tastiest, and fullest you can buy. From the highlands where the drink was pioneered to the mountains of Japan, any of these whiskey bottles are a collector’s dream. To keep the list from being redundant, we limited it to one per distillery. Continue reading to learn about the brands, flavors, and bottles that define this classic drink at its most glamorous. 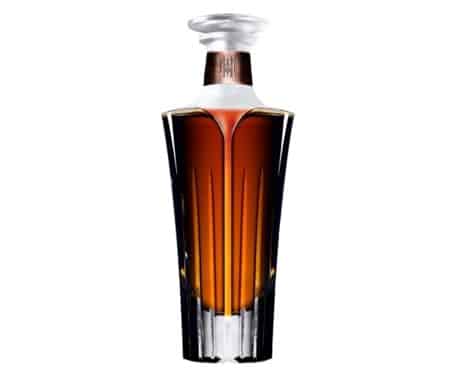 Midleton’s 46-year-old whiskey certainly has the most unique name on this list. Despite sounding like the hidden chapter of an anime series, the Old Midleton Distillery put out The Silent Distillery: Chapter Two before it closed in 1975. It is now the New Midleton Distillery, still located in Ireland, but any bottles from the old company have skyrocketed in value because of the change.

This single malt Irish whiskey was preserved in bourbon and sherry casks for about two decades, then re-casked in bourbon casks for the rest of the time. It has a full-bodied flavor and despite being at the bottom of our list, still costs about $95,000 per bottle.

The Midleton Distillery goes back to 1825, making it nearly the oldest brand on this list. It was started by the Murphy family on the banks of the Dungourney River in Ireland. It hardly gets more authentic than the whiskey distilled there. 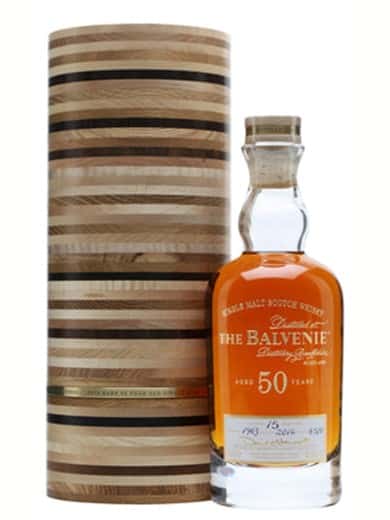 This bottle of Balvenie Speyside Single Malt Scotch was released in 2014 from cask #4570. It was aged 52 years from its filling date in May of 1963, where it was preserved in a cask of European oak hogshead. This cask is notably sweeter than others in the batch, with a flavor of toffee that has touches of oak and honey. Blossoms, brown sugar, syrup, vanilla, and other spices round it out, with a long, dainty, sweet finish.

The Balvenie distillery in the Scottish Highlands considers itself a distiller of craft whiskey and has been in operation since 1892. Even in the world of automated productions, Balvenie continues the old ways in Islay, still growing its own crops of barley, still using the traditional floor maltings, and still using on-site copper craftsmen to build, repair, and design its classic stills. 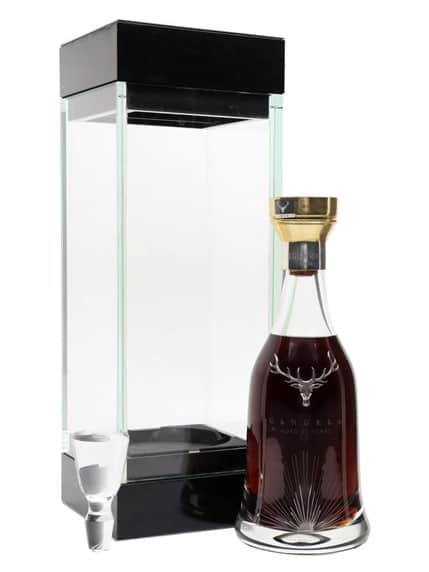 Dalmore made this 50-year single malt scotch whiskey from their famous distillery in Scotland. The whiskey is famous for its flavors, which are lingering and smooth. The mix of tastes is tantalizing and includes notes of honeyed marzipan and molasses, sweet apple, morello cherries, and more. The flavors culminate in an experience that’s like drinking spicy Madeira cake with undertones of caraway, fruit, and sugar. It gets even better on the finish, which tastes of ginger, coffee, amaretto, butterscotch, guava, and more.

These hallmark flavors define Dalmore’s crowning achievement in whiskey. Only 77 of these bottles were ever released, which sell for $149,999.99.

Dalmore named this whiskey after the unit of measurement that designates how intense a source of light is, known as a candela. 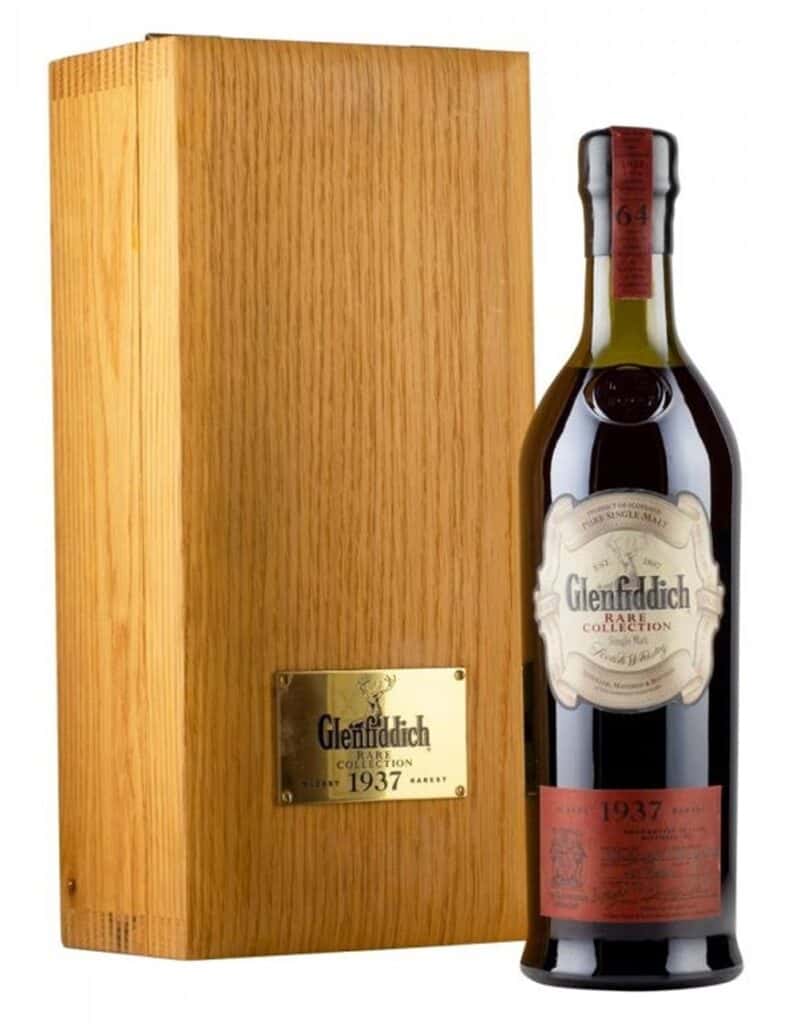 The flavor of this whiskey is incredible, with poached pear, chocolate, oak, heather, and toffee, with additional hints of cinnamon, cloves, and raisins. On the back of your palette, you’ll get flavors of chocolate and cedar with a warm and fruity finish.

Glenfiddich is a fifth-generation family distillery in Scotland founded by William Grant in 1886, making it one of the rare family-owned whiskey distilleries, especially at this level. They hired copper craftsmen to create unique stills in 1957 that remain a hallmark of the Glenfiddich brand. 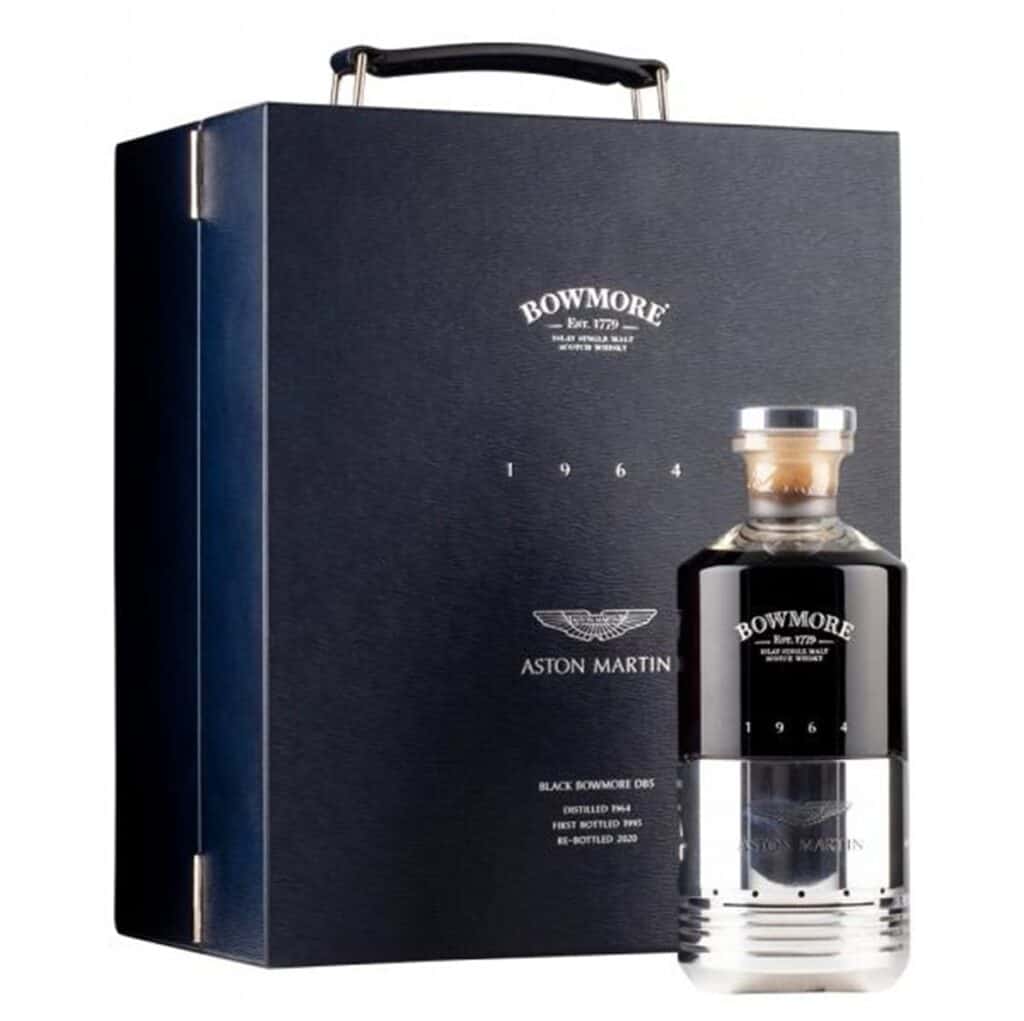 This Bowmore Black DB5 whiskey was aged 31 years in barrels that gave it the flavorsome hint of walnut and sherry. This whiskey was made in a partnership between Bowmore, whose single malt scotch whiskey out of Islay is one of Scotland’s most famous, and Aston Martin, the luxury car company.

Bowmore has been making whiskey from their venerated distillery on the island of Islay on the shore of Loch Indaal in Scotland since 1779, sourcing its fresh water from the River Lagaan. This makes them the oldest distillery on this list and in all of Scotland, which is already the home of old distilleries. 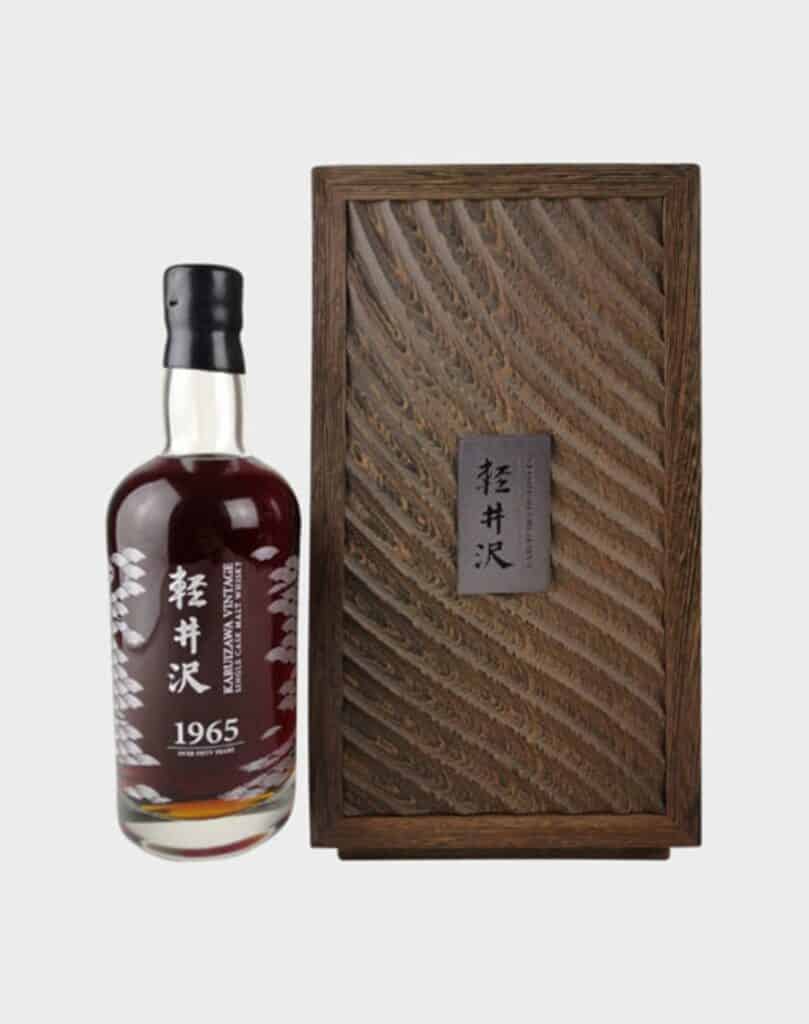 This bottle of vintage Karuizawa Mizunara whiskey known as The Dragon is not the last from Japan on this list, even if Scotland usually dominates discussions of the world’s finest whiskies. This 52-year whiskey from 1960 was aged in a sherry cask, which imparted a smooth, sweet texture to the drink. Its flavors include overtones of fruit and spice, with mango, oak, fig, raisin, and brandy on the palette. The finish is like spicy thyme, oak, grapefruit, and allspice.

Only 41 bottles of this vintage were ever made. The remaining bottles of Karuizawa vintage whiskey can sell for up to $538,741.65, marking a huge jump in price on this list.

The Karuizawa distillery is no longer in operation. They ran from 1955 to 2000 when whiskey consumption in Japan hit an all-time low, though there are rumors that they may be coming back. Their vintages are now highly coveted collector’s items. Another vintage, bottled in 2017, basically the distillery’s last, sells for up to $106,000. 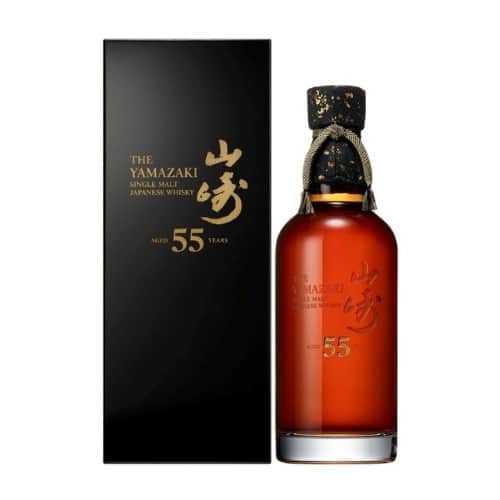 The oldest Suntory Yamazaki whiskey was aged 55 years and bottled in 2020, so it’s a new collector’s item banking on the already prestigious Suntory name. After breaking records by selling for $343,000 at auction, Suntory Yamazaki Whiskey is now the most expensive to come out of Japan and the second most expensive whiskey in the world. Their newer offerings have outdone their previous records three-fold.

This whiskey has fruity notes of mango and orange, with an undertone of sandalwood, sweet cedar, ginger, and more. It has a sweet palate overall and a long, spicy finish. It can be bought for $999,999.99, making it the second most expensive whiskey out there.

The Suntory Yamazaki distilleries produce Japan’s most recognized single malt whiskey. They’ve been around since they produced wine back in 1899, founded by Shinjiro Torii. They built the first malt whiskey distillery in Japan, constructed in Yamazaki outside of Kyoto in 1923, beginning the history that led to this showstopping bottle. 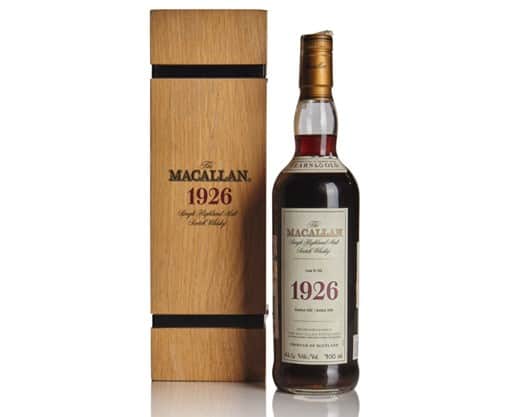 The most expensive whiskey is The Macallan 1926. This prestigious bottle is also the most expensive Scotch and possibly the most expensive liquor in general. This was aged an astonishing 160 years before becoming one of only 40 bottles drawn back in the day, placed in cask #263, which is now the holy grail of whiskey collectors. Of the few unsold bottles, this Scotch whiskey was recovered and has become the end-all in most discussions of valuable drinks.

Straight from the idolized Scottish distillery of Macallan, this bottle blasted the roof off the auction house’s estimate when it sold not for around $500,000 as Sotheby’s expected by just over $2.07 million, making it the most expensive whiskey ever made, sold, or seen.

In addition to being one of only 40 bottles from this batch, The Macallan 1926 that sold here is even rarer than that. It has a specific label on it hand-painted by the artist Michael Dillon, making it one of only 14 bottles in that batch known to have it. The others have either been drunk long ago or remain hiding, waiting for someone who knows what they’re looking at to blow off the dust and make millions.

The most expensive whiskey in the world starts around six figures and never stops going up. Aged for many decades, sometimes from distilleries that no longer exist, these bottles of whiskey are the finest that money can buy (which is good since you’ll need a lot of it!).

9 of the Rarest 2-Dollar Bills in Circulation