9 Most Expensive Restaurants in Miami

Miami is known for its nightlife, its lights, its beaches, and its gorgeous restaurants. Its most expensive places to eat favor Asian-inspired cuisine, often with a Cuban flair.

In this list, we break down the 9 most expensive restaurants in Miami, including their most famous dishes and the chefs that made them renowned. 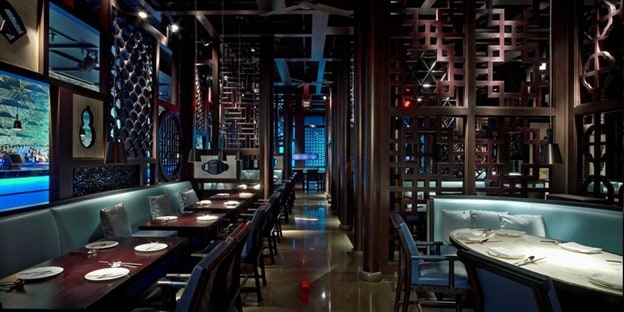 The Chinese restaurant Hakkasan earned a Michelin star in 2001, cementing itself as one of the leaders in luxury Chinese cuisine. They now have 10 locations around the world, starting in London and opening branches in Istanbul, Oman, throughout Europe, and even in Miami.

Their famous dishes include an A5 Wagyu Striploin (4oz) for $160, which is grilled with lotus and asparagus. But their most expensive and luxurious entrée is a Peking duck served with 28g of Osetra caviar, which is on the menu for $208.

Like most of the world’s most expensive restaurants, Hakkasan also offers luxurious drink pairings. These include a 1998 Chateau Petrus, Pomerol, which they sell for $10,500 a bottle. 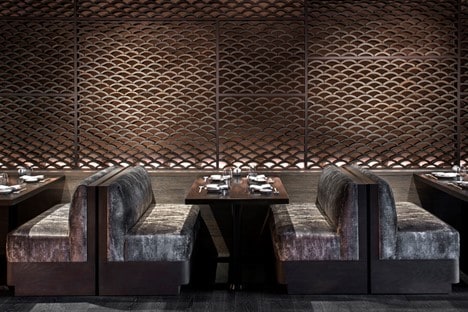 Nobu Miami is a sushi restaurant with a ton of decadent signature dishes that drive its prices to the top of its neighborhood. You can order cold dishes like $49 yellowtail tartar with caviar or $49 toro tartare, or red snapper sashimi dry miso for $36. They have a lobster shiitake salad for $70.

Their most expensive fixed-price entrees include Chilean sea bass with a sauce of black beans ($58), a king crab tempura ($58), and a Maine lobster crusted with black truffle for $110. However, like many restaurants on this list, their most expensive offering is Japanese A5 Wagyu beef, which they sell for $40 per ounce in a choice of styles.

You can choose between having it tataki style, toban, new style, kushiyaki, just as a steak, or even turned into nigiri. If you opt for an 8oz steak, for instance, it’ll cost you $320, but you can try it for much cheaper.

Nobu Miami is located in the Eden Roc Miami Beach Resort, one of Miami’s most famous luxury hotels. However, Nobu restaurants are located all over the world from Malibu to New York, Ibiza Bay to London, Singapore to Monte Carlo, Los Angeles to Tokyo, and more. 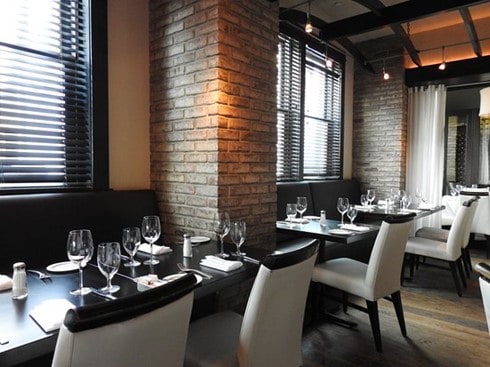 Prime 112 is named for its address at 112 Ocean Dr, inside the Brown’s Hotel. This restaurant bills itself as the most modern steakhouse around, providing an alternative to steak chains with reservation-only luxury menus that go beyond the norm.

Some of their signature dishes include truffled lobster mac and cheese, Kobe beef sliders, Colorado rack of lamb, a 16oz churrasco steak, a Maine lobster stuffed with jumbo lump crab and bay scallops, and a blackened swordfish served with papaya salsa and arugula. Their crowning dish however must be their A5 Japanese Kobe steak, a 16oz ribeye that costs $230.

Prime 112 opened in 2004. Myles Chefetz runs the Myles Restaurant Group, which is a series of restaurants in the “prime” brand, including Prime Italian, Prime Fish, and Big Pink. He even started the Prime Hotel. 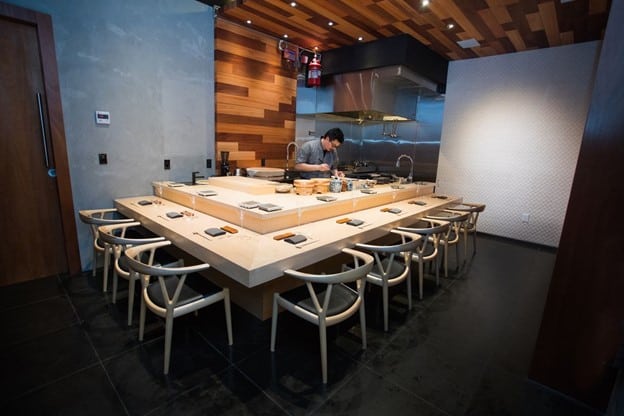 Hiden earns its reputation for being a secret. It’s an 8-person counter that serves premium sake and an omakase tasting menu – that’s it. It’s behind a normal-looking taco stand on NW 25th St in Miami.

Their tasting menu is constantly changing with the seasons, but its 10 courses could include champagne and oyster with peach, shigoku, and yuzu-green tea granita. They may have toro, akami, and hotate sashimi, as well as a corn and shishitou leaf miso.

They serve many types of sushi, including masaba, masunosuke, uni, zuke, otoro, and more. The final course of the meal is usually kou, made from A5 Miyazaki wagyu ribeye, some of the most expensive beef in the world. The whole menu costs $250 per person.

The restaurant’s original chef was Tadashi Shiraishi. He left in 2019, opening the door for Chef Tetsuya Honda, who now throws his own spin on the Edomae-style sushi menu, combining Japanese techniques with seasonal Florida ingredients. His sous chef is James Weinlein. 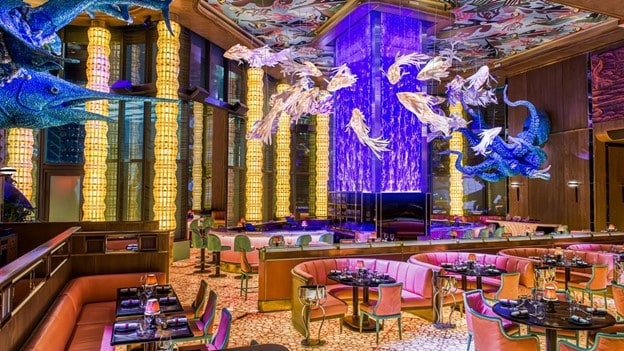 Chef Björn Weissgerber earned a Michelin star before opening this restaurant at S Miami Avenue called Sexy Fish. Its menu includes a lot of fresh Japanese and seafood favorites in a 10-course omakase menu for $130 or a premium version for $240.

Some of their signature meat offerings include a whole baby chicken with yuzu and chickpeas for $32.60. There’s spicy beef tenderloin with black pepper and ginger for $48.30. Up the ladder, there’s a caramelized 8oz striploin with garlic miso for $68. And at the very top, they serve a 32oz tomahawk steak made from Australian Wagyu with signature “sexy” condiments for $280.

Weissgerber trained with many famous chefs, including Alfons Schuhbeck, Eckart Witzigmann, and Rainer Becker. He earned a Michelin star by the age of 27 in 2002 at Ca’s Puers in Mallorca. 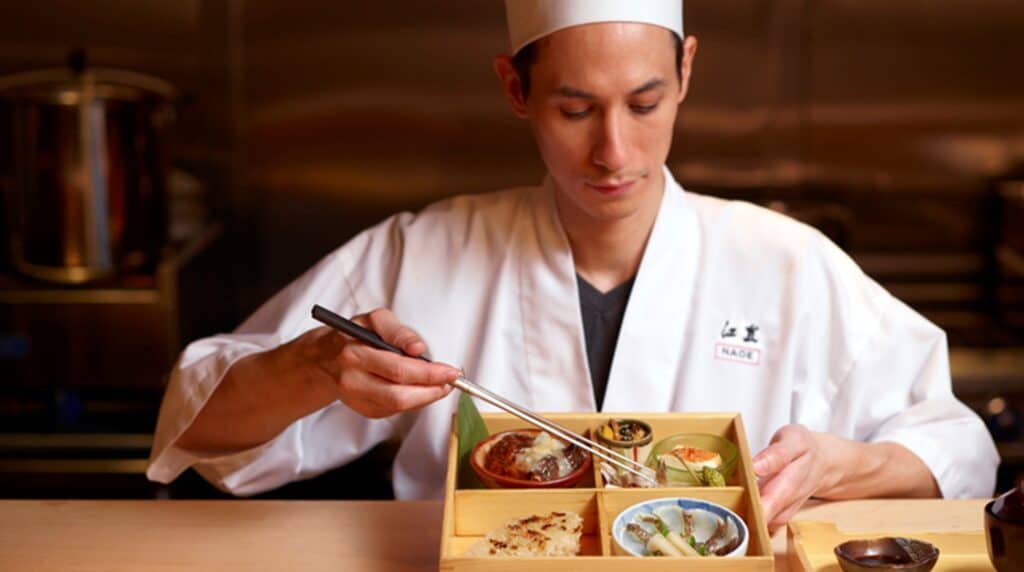 Naoe Miami is a Japanese restaurant that specializes in a huge tasting menu that offers a 2-3-hour dinner for $280. They are famous for their bento box, full of fresh Japanese seasonal favorites, as well as an omakase tasting menu.

Some highlights in their list of ingredients include Japanese lobster and sardines, sea urchins, salmon belly (the most expensive part), and monkfish liver. They serve many multi-course meals in the kaiseki style, which refers to individual pieces of food served on a tray, often with ceremonial tea.

Chef Kevin Cory is one of the most decorated chefs in Miami. He has won the Five-Star Award through the Forbes Travel Guide every year from 2019 to 2022. 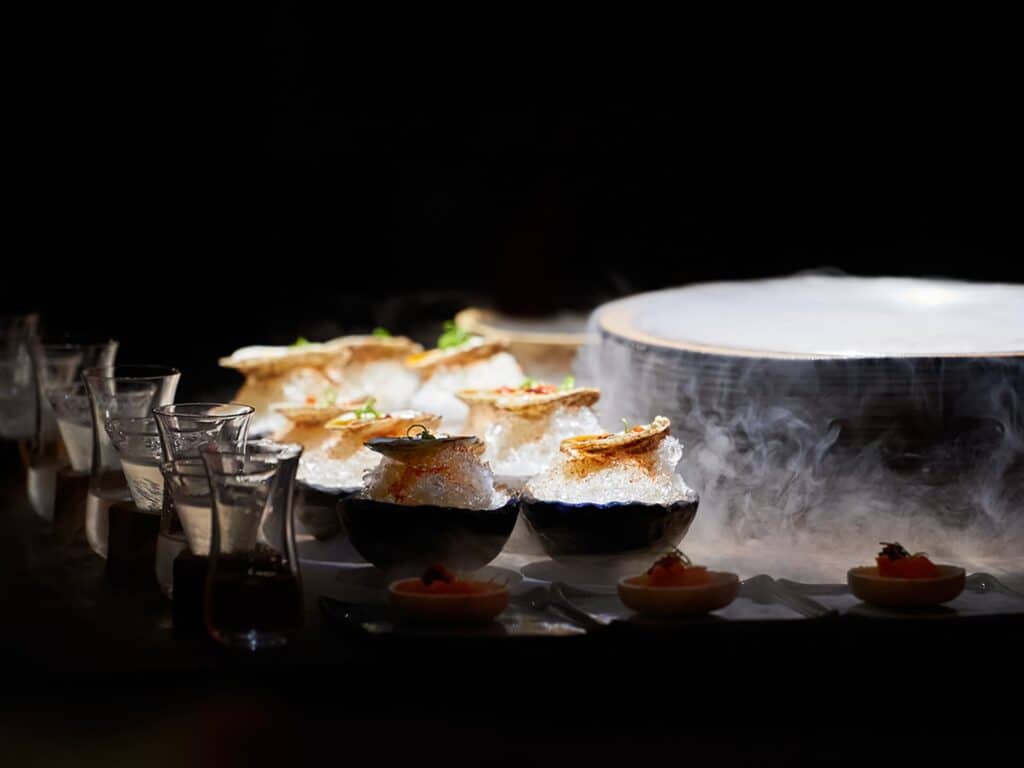 Nossa Omakase is nearly the most expensive restaurant in Miami. This restaurant serves a non-traditional omakase tasting menu that fuses Latin flavors with Japanese sushi techniques. The result is a high-minded fusion of flavors where the most expensive version is a whopping $435 per person. They offer smaller menus for $345 and $265.

Their biggest dinner includes Miyazaki Japanese Wagyu Beef, the most expensive steak in the world, straight from Hokkaido, Japan. Its 13-15 courses also include Russian caviar, Italian truffles, and more.

The restaurant is small, with a sake bar and sparse tables inside the Hyatt Centric South Beach Miami hotel.

“Omakase” is a phrase from Japan that refers to certain kinds of restaurant preparations. It literally translates to “I’ll leave it up to you,” meaning the patron allows the chef to serve them a multi-course menu of their choosing. 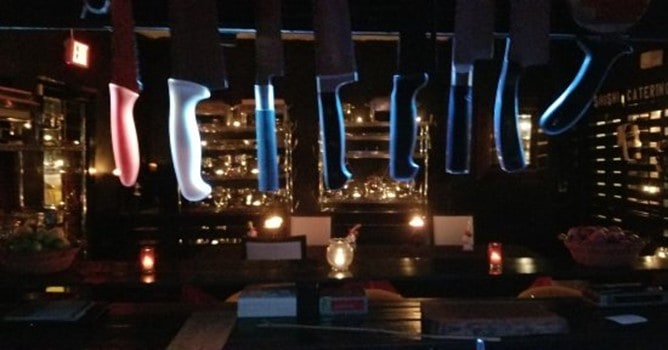 Chef Blanco is known for creating “shushi,” which is a combination of sushi techniques and a Cuban flavor profile. The chef turns cuisine from all over the world into rolls of shushi. His omakase menu, which includes a bottle of Dom Perignon as well as cocktails and desserts, circles the culinary globe through eight courses.

Per person, this meal, known as the “celebrity eight-course shushi dining experience” costs $463.19.

The name “shushi” was invented on accident when Chef Blanco made his mom a sushi roll full of Cuban meats, beans, rice, and avocado, and she couldn’t say “sushi.” It came out as “shushi” and the name stuck. 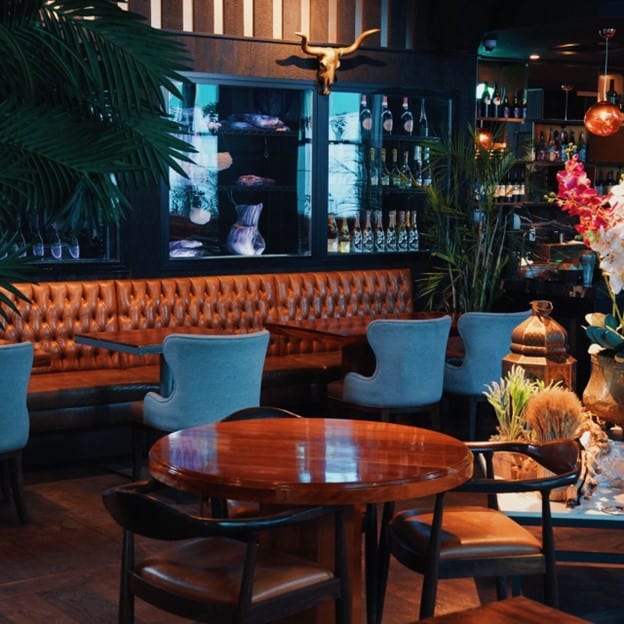 The most expensive restaurant in Miami is Nusr-Et. It’s a dining experience like few others with some seriously decadent meal offerings. Their specialty is coating their meat in expensive edible gold, resulting in a Gold Steak, which is a wagyu striploin covered in 24K gold that costs $590.

However, the crown jewel of their menu is a Golden Tomahawk, made from marbled wagyu tomahawk steak and 24K gold that costs a solid $1,000. For less money, they also have a mustard-marinated bone-in tomahawk ribeye (sans gold) for $295 as well as a sliced tenderloin for three griddled in butter. This is the “Nusr-Et Special” and costs $290.

Nusret Gökçe is the head chef/artist and calls himself a “food entertainer.” His unique meat seasoning performance technique became a viral meme in 2017. His restaurant, Nurs-Et, also has locations in the UK, UAE, Greece, Turkey, and Saudi Arabia.

8 Most Expensive License Plates in the World