8 Most Expensive Bottles of Jack Daniels

The earliest record of people making whiskey comes from the 1400s in Scotland. These original whiskies may have served as antiseptic, but people started drinking the barrel-aged alcohol once distilling techniques became widespread. Some distilling practices were introduced to Ireland in the 1300s by monks. These techniques turned barley beer into liquors which finally became whiskey.

Whiskey eventually reached the U.S. thanks to Irish and Scottish travelers. In Tennessee, Jasper “Jack” Newton Daniel created his signature Old No. 7, setting the stage for the Jack Daniel’s Brand. Jasper established his official distillery in 1866 and his company quickly took off. By the early 1900s, Jack Daniel’s won a gold medal for its exceptional whiskey and found fans throughout the U.S.

Jasper Daniel retired in 1907 and passed away in 1911, leaving his business to his nephew Lem Motlow. Soon after, Prohibition outlawed alcohol, leading to warehouses full of Jack Daniel’s whiskey that couldn’t be sold. The company essentially went into hibernation, but things turned around shortly after Prohibition ended in 1933.

Today, Jack Daniel’s sells a range of whiskies — and some are crazy-expensive. Keep reading to learn more about the most expensive Jack Daniel’s in the world!

8. Scenes From Lynchburg No. 7 Tennessee Whiskey 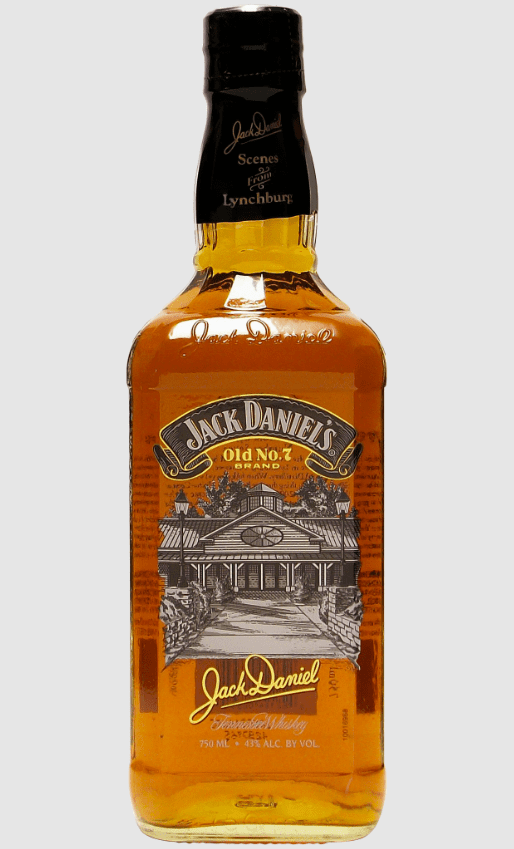 Jack Daniel’s has always had deep ties to Tennessee. The company was founded by a Tennessee native, and its first distillery was established near a famous spring in Lynchburg. Jack Daniel’s whiskies often pay homage to this history, whether it’s in the name or the bottle design. This bottle does both, with a name referencing Jasper Daniel’s hometown and a label featuring the Jack Daniel’s visitor’s center (also found in Lynchburg, Tennessee). The special edition release came out at different times depending on the country, but the U.S. enjoyed the drink starting in 2003.

Jack Daniel’s doesn’t offer this whiskey by the box. 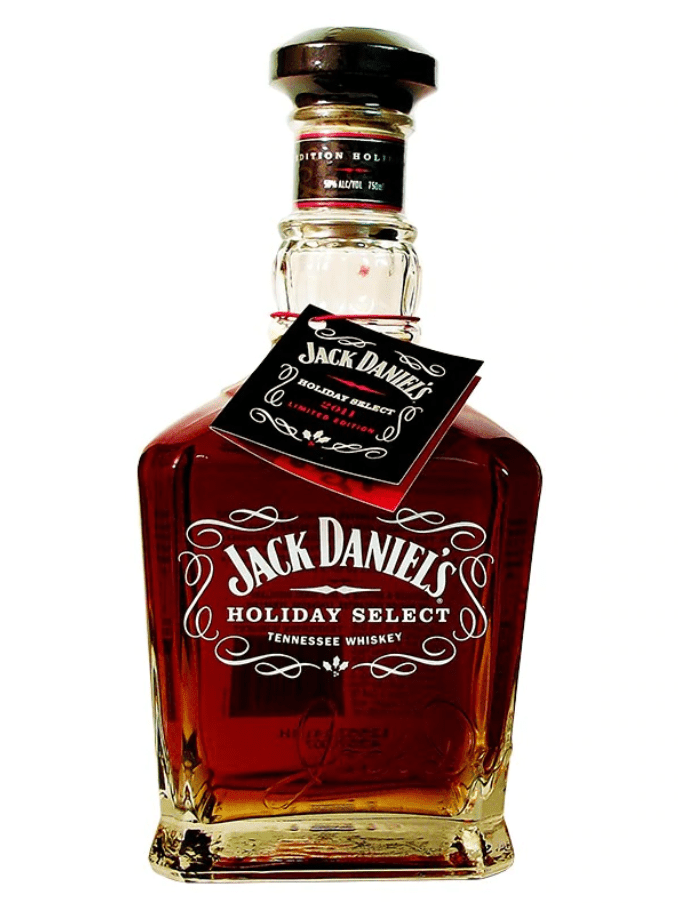 Each Christmas, Jack Daniel’s makes several huge “Christmas trees” out of barrels used to mature the brand’s whiskey. The tradition started in 2011, but it’s not just a marketing ploy. Each tree’s top barrel is auctioned off during the holiday season and the proceeds go toward Operation Ride Home, a company initiative that helps military service members travel home and reunite with their families.

In 2011, Jack Daniel’s released a limited edition series of whiskies aged in the original Holiday Barrel Tree barrels. The special release doubles down on the Christmas spirit with notes of toasted oak and warm spices. If you can find one for sale, a bottle of this rare whiskey will cost you at least $500 (some sellers ask for upwards of a thousand dollars).

People who place the winning bid on a Christmas tree barrel get their prize shipped for free. Each sold barrel is signed by the company’s master distiller and customized with a laser engraving. 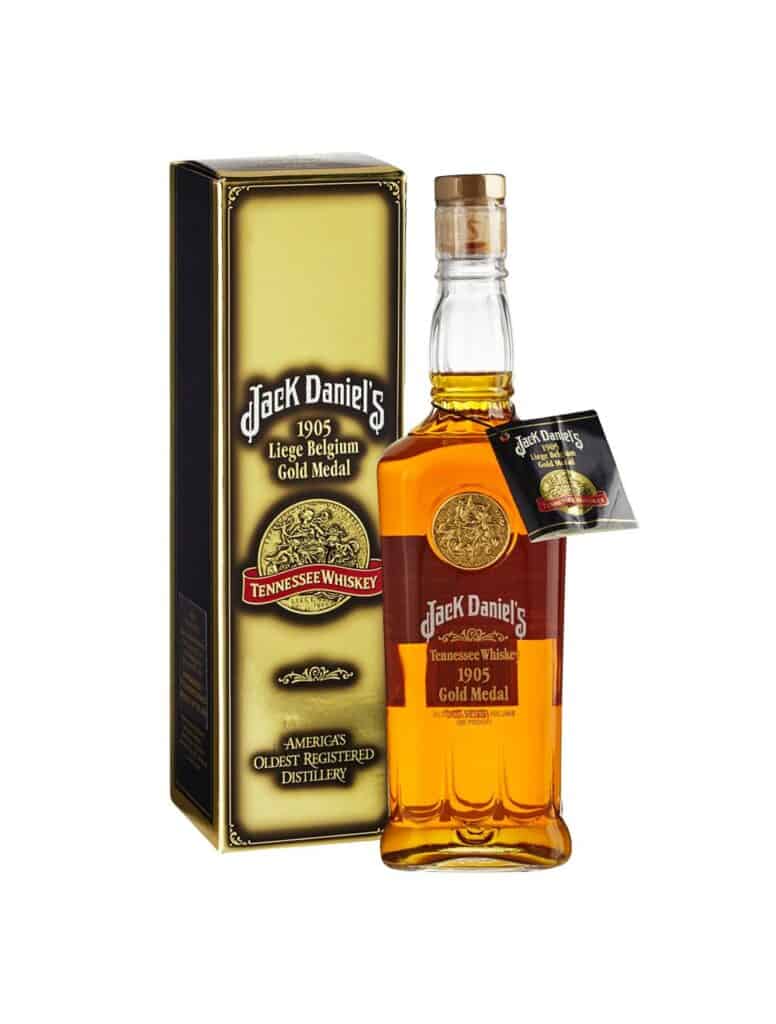 The first was 1904, representing the very first gold medal Jack Daniel’s ever received. The medal was awarded at the World’s Fair when Jasper Daniel entered his whiskey in a tasting competition.

Today, 1905 is one of the most sought-after bottles from the Gold Medal series. Many 750ml bottles sell for upwards of $600, while others go for more than a thousand.

Jack Daniel’s made 1-liter bottles of 1905 for markets outside the U.S. 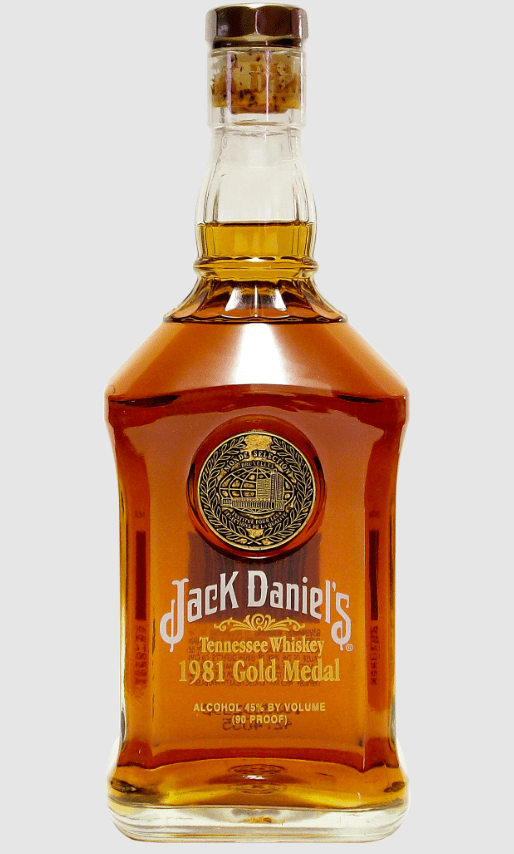 1981 was the seventh and final installment of the Gold Medal series. The bottle, which had a limited release in 2006, celebrates Jack Daniel’s gold win at the Selection Institut Pour Les Selections De La Qualité in Belgium. The competition’s top medal is called the “Grand Gold Medal with Palm Leaves.” Jack Daniel’s features that medal with palm leaves on its 2006 commemorative bottle.

If you can find one of these limited edition bottles for sale, you’ll see a price tag upwards of $700. Many bottles go for even more, with some surpassing the thousand-dollar mark. 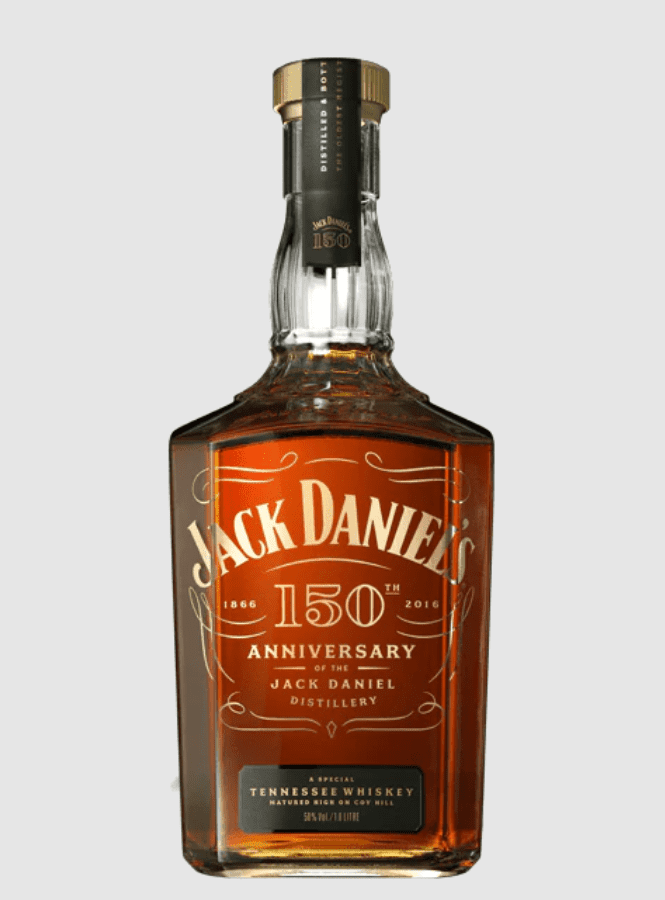 Jack Daniel’s hits its 150th birthday in 2016 — and what better way to celebrate than with whiskey?

The Anniversary bottle was special for a few reasons. First, it was limited-edition. Jack Daniel’s didn’t say how many bottles were made, but it’s definitely a rare one. Second, the company used Jasper Daniel’s original whiskey recipe. The result is a butterscotch-buttered-corn flavor that’s sweet and spicy. And finally, the bottle features special Jack Daniel’s artwork on the label.

Overall, the special Anniversary bottle is very unique and very expensive. One bottle will cost you about $1,100 — but as always, that price varies and easily climbs higher.

Jack Daniel’s used the brand’s original recipe for this bottle, but they cranked up the strength to 50%. 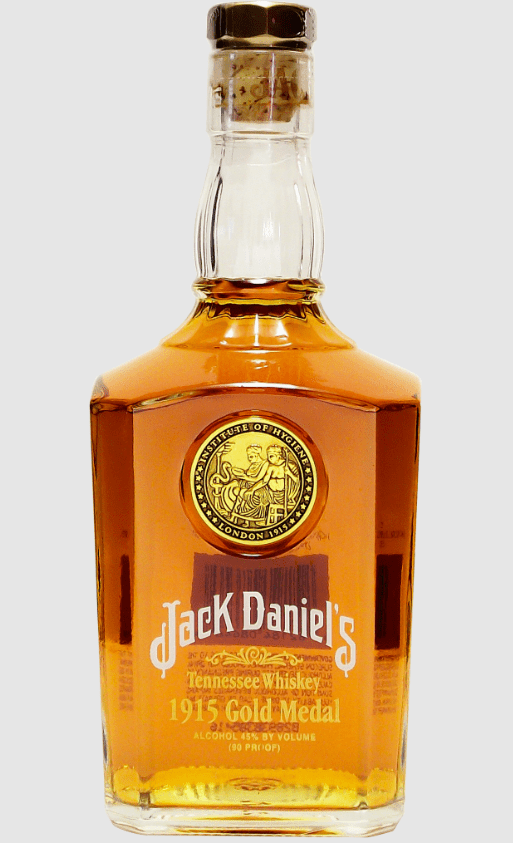 Tennessee was already under Prohibition in 1915, and Jack Daniel’s says it was increasingly clear that the law would spread throughout the U.S.

By this point, Jasper Daniel had passed away after handing off the business to his nephew, Lem Motlow. Motlow was worried about the future of whiskey in America, but he kept up his work nonetheless. This included entering the drink in a London-based competition. The move turned out to be a sliver of hope for the company — Jack Daniel’s whiskey won another gold medal, the fifth in its growing collection.

In 2002, Jack Daniel’s commemorated its 1915 gold with another special edition bottle. This time it featured 90-proof whiskey at 750mls. If you track down a bottle, you’ll pay more than a grand to get your hands on it.

Jack Daniel’s 1915 gold was the brand’s second win in a London-based competition.

Approx. Bottle Price: $2,275
Reason for Price: Only 100 barrels were made
Interesting Fact: This whiskey was released on Frank Sinatra’s birthday
Year Released: 2015 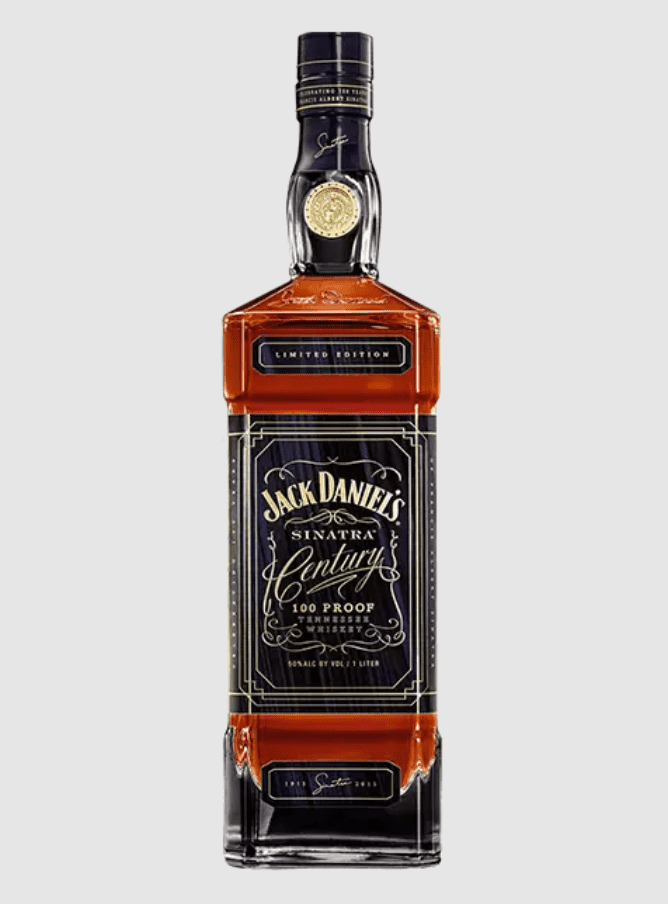 In 2015, Jack Daniel’s celebrated Frank Sinatra’s 100th birthday with an ultra-limited whiskey. The company only made 100 barrels worth of the rare recipe, and bottles were sold alongside “a previously unreleased soundtrack as special as the whiskey itself.”

Today, rare bottles of this exclusive whiskey are worth more than two thousand dollars. Jack Daniel’s says the drink has a flavor profile defined by deep and robust notes of white oak.

Frank Sinatra passed away in 1998 at the age of 82. The singer and actor was one of the most popular performers of the 20th century and won several notable awards, including multiple Grammy Awards and an Oscar.

Approx. Bottle Price: $4,500
Reason for Price: Rare and antique bottle
Interesting Fact: This whiskey was made in 1948
Year Released: 1955 (approximate) 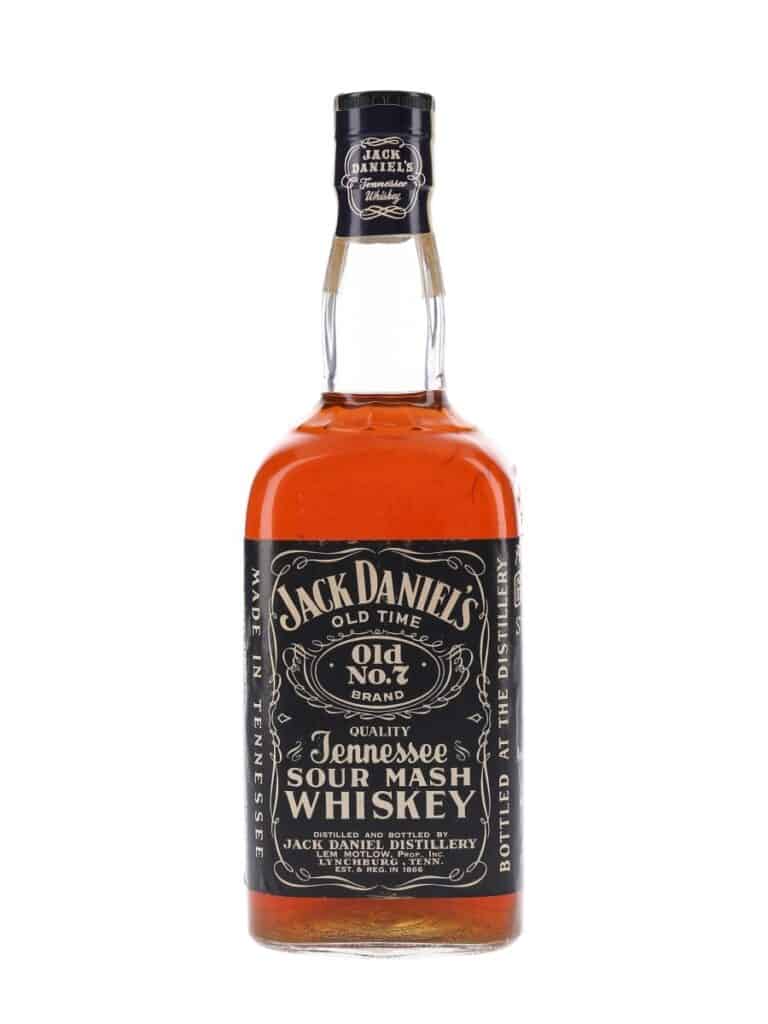 At $4,500, this rare Jack Daniel’s whiskey was made in 1948 and bottled in 1955. The amazing antique represents some of the oldest Jack Daniel’s bottles still in existence.

In 1948, Jack Daniel’s was exiting the WWII era with fans across the globe. War-related supply shortages made Old No. 7 hard to find, but that didn’t stop people from loving the brand. By 1951, the company was close to pre-Prohibition production levels, and by the ‘60s, the company was selling whiskey like crazy. Today, Jack Daniel’s is one of the most iconic brands in the business.