8 Most Expensive Irish Whiskey Ever Sold

Irish whiskey has been around for generations. The drink was invented around the 1200s, making it one of Europe’s oldest distilled spirits. Although its exact origin is unknown, experts say the drink was introduced to Ireland after monks visited the Mediterranean. The monks learned how to distill spirits during their travels, then brought the technique back to Europe.

The oldest Irish whiskey was pretty different from the modern drink. According to historians, it was probably clear and infused with flavors like mint. Some variations may have been blended with sweaters like honey.

By the 1600s, Irish whiskey was getting even better. Around that time, King James formally permitted the first licensed distillery in Bushmill, County Antrim, a village in Northern Ireland. By the 1800s, Ireland was making tons of whiskey, especially for customers in the U.K.

Irish whiskey can be very expensive. From antique bottles to limited-edition blends, here’s our list of the world’s most expensive Irish whiskey! 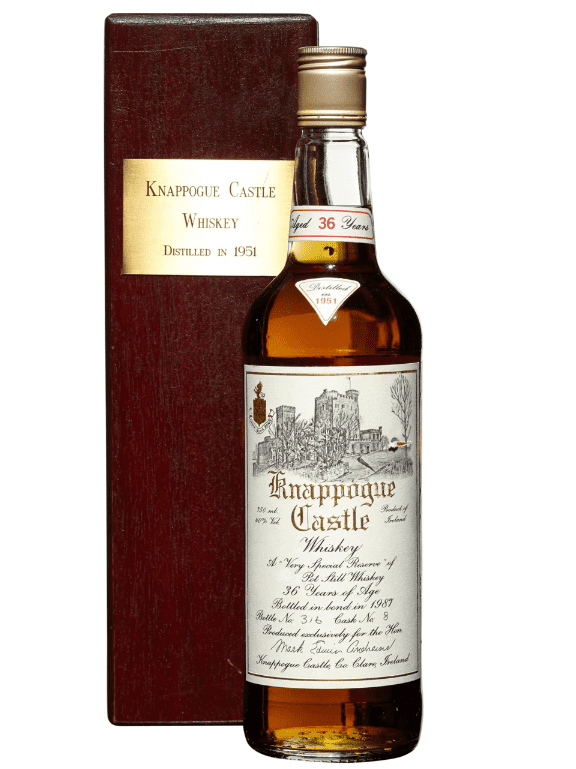 First up is a rare Irish whiskey by Knappogue Castle. The rare bottle was distilled in 1951 and packaged in 1987. This particular bottle was number 316 from a limited-edition run, and the whiskey itself came from cask number eight. Christie’s auction house sold the special single malt Irish whiskey in November 2019 for $1,062.50.

Knappogue Castle isn’t just a whiskey brand — it’s a real castle. The beautiful castle was built in the 1400s, then expanded in the 1800s. Today, tourists can visit the building to explore themed tours, enjoy medieval banquets, and view the stunning Irish countryside. 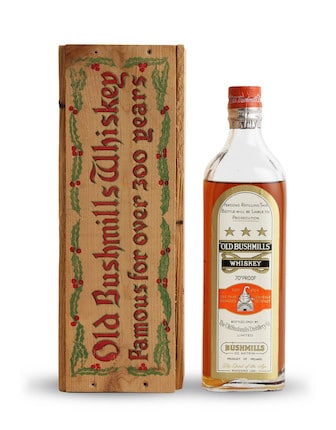 Coming in at number seven is an antique whiskey by Old Bushmills Distillery. The rare bottle is unopened and features Bushmills’ antique label. Bonhams auction house says the special Irish whiskey is worth up to about $3,700 — would you pay that much for whiskey?

Beyond the rare factor, this whiskey has a few quirks that make it really special. Most notably, the bottle’s label says anyone caught refilling the glass will be “liable to prosecution.” That warning was probably added to stop people from fraudulently selling cheaper whiskies using the Bishmills name.

This whiskey is 70-proof. That number describes how strong the alcohol is. The term “proof” comes from the 1500s when the government of England imposed higher taxes on the sale of strong alcohol. Officials would test the alcohol to see if there was “proof” of high alcohol content. 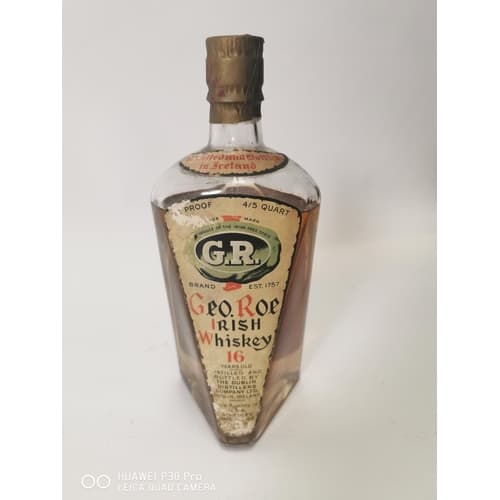 George Roe’s distillery closed in 1923, but it took several years for the remaining casks of whiskey to sell. This particular bottle was probably made in the 1930s and exported from Ireland to the U.S. for sale. However, the whiskey apparently never found a home, and the bottle survived unopened for decades.

In 2020, this whiskey finally sold at auction for about $6,000. “Most remarkably of all, the label proclaims this to be ‘pot still malt whiskey,’” says the seller, “making this an incredibly rare Irish single malt.”

This bottle of whiskey was unopened at the time of sale. Despite its age, the drink was probably still edible. Opened bottles can last for years because of the drink’s natural preservatives. Unopened bottles can stay fresh even longer. 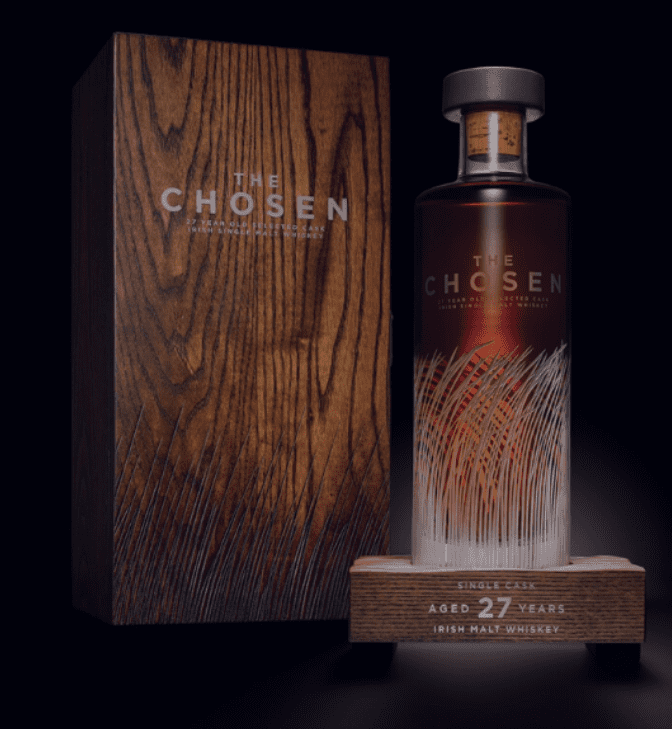 Coming in at number five is this record-setting whiskey by JJ Corry. The wildly expensive whiskey costs about $6,500 a bottle, making it one of the most expensive Irish whiskies ever released. According to JJ Corry, the luxury drink is housed in a beautiful crystal bottle.

Each bottle is hand-made, and each features a grass-like design paying homage to Ireland’s wild grasslands. The whiskey itself was distilled in 1991, and JJ Corry says it showcases “the finest that Irish Whiskey can offer.”

This unique whiskey was sold inside beautiful wooden boxes. Each box features the whisky’s title and an interior description detailing the drink’s features and origin. 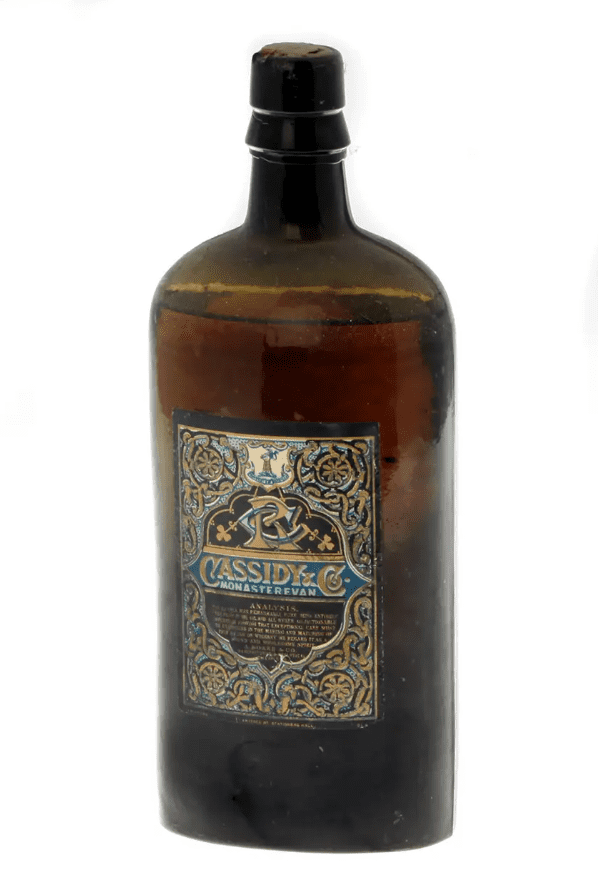 Cassidy & Co was a whiskey-maker operating during the 1800s in Ireland. The company was founded in 1784 and closed its doors over 100 years later. In 2019, a rare bottle of the brand’s antique whiskey was sold at auction for a whopping $24,000.

The unopened bottle was made sometime during the 1880s and features Cassidy & Co’s historic label.

As you’d expect, this bottle of whiskey is very rare. In fact, experts say only two of its kind exist. One is safely held at the Irish Whiskey Museum as a historical object, the other is owned by the lucky auction winner.

The auction house behind the sale didn’t reveal the identity of the buyer, but they did say the bottle will “remain in Ireland.”

Some people think Bono from the band U2 purchased this whiskey. 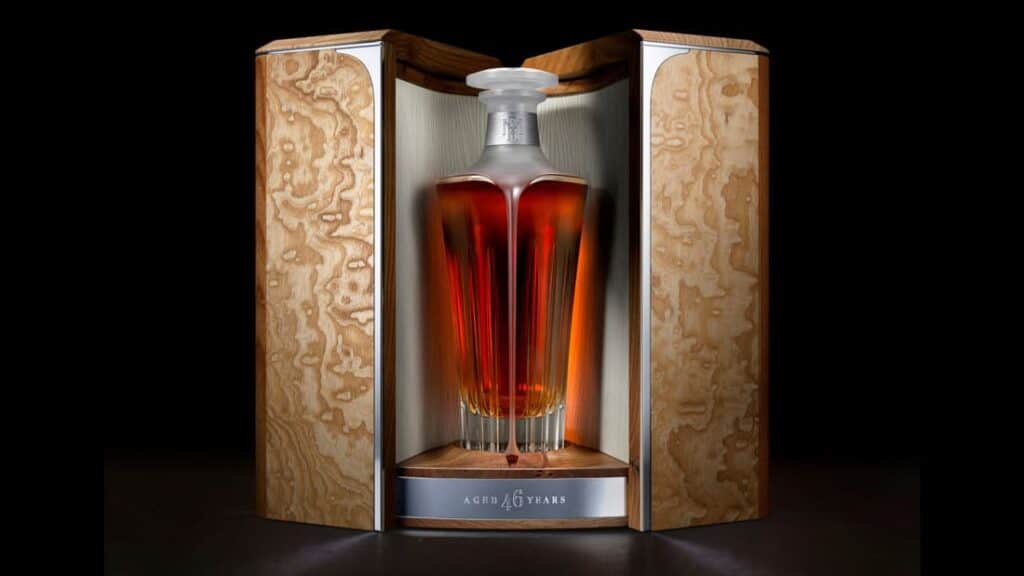 Midleton Distillery was established in the 1800s. The business shut its doors in the 1970s, but several casks of whiskey remained. Those casks were missing for years, but they were suddenly discovered in 2020.

The incredible find gave Irish whiskey fans a glimpse into the past and the chance to drink some of the most unique whiskey on the planet.

In 2021, the Midleton Very Rare 46-Year Irish Whiskey was released to the public. The one-of-a-kind drink was presented in a beautiful bottle made of authentic Waterford crystal. At $45,000, this is the third most expensive Irish whiskey in the world.

Only a few people were lucky enough to try this rare whiskey. According to them, the drink has notes of plum, blackberry, and other fruity flavors. 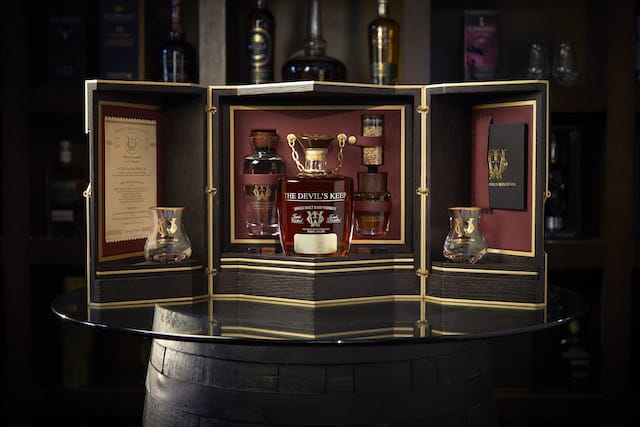 Coming in at number two is The Devil’s Keep by The Craft Irish Whiskey Co. The rare, limited-edition drink was released in 2020 as a special-edition whiskey. According to reports, just 333 bottles were produced, making this one of the rarest Irish whiskies on this list.

Jay Bradley, The Craft’s founder, says this whiskey took over two years to develop. All that hard work went toward a good cause. Bradley says the first bottle of The Devil’s Keep was sold to benefit charity. “With more than two years of hard toil…to bring The Devil’s Keep to life, it was very fitting to donate our first bottle to a cause that is so close to my heart [supporting children with serious illnesses].”

This whiskey was sold at an auction in Texas. 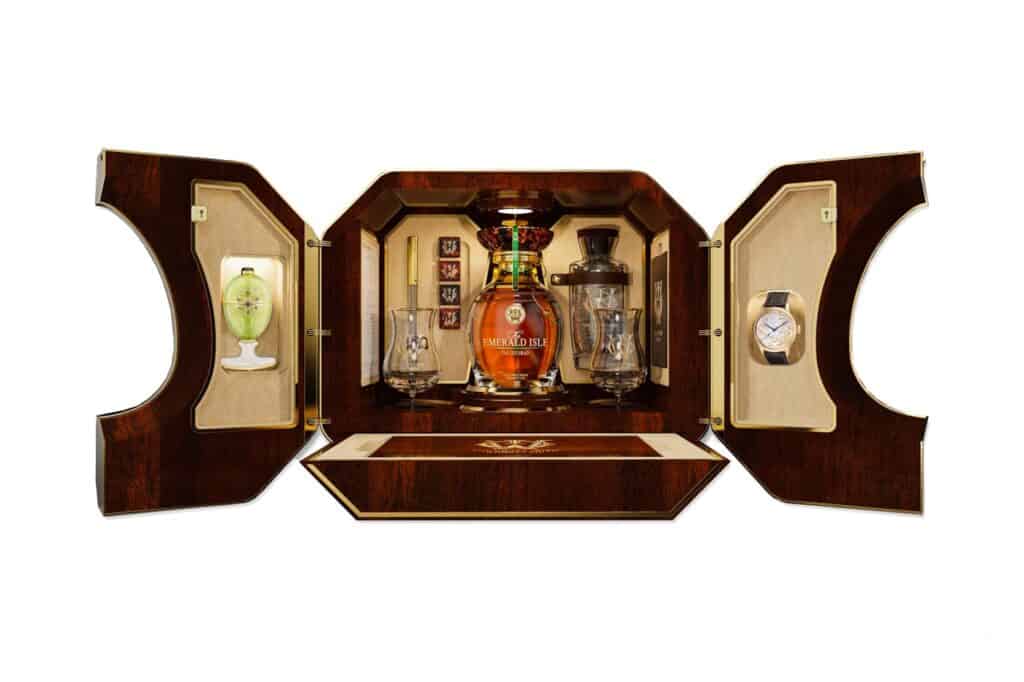 The Craft Irish Whiskey Co. Emerald Isle collection is the most expensive Irish whiskey in the world.

The Craft Irish Whiskey Co. doesn’t make much whiskey. In fact, one report says the company is an “extremely low-volume whiskey producer.” That means it’s really hard to find any whiskey made by the brand.

In 2021, The Craft decided to make its whiskey even more exclusive by creating a limited-edition collection with Fabergé, a luxury goods maker. The stunning final product featured two bottles of 30-year-old Irish whiskey presented in a solid walnut case.

Fabergé led the bottle design, using glass and real emeralds to craft the container. The Fabergé company added one of its famous Eggs to the collection, and two metal sculptures complete the set.

Overall, this rare Irish whiskey is worth a jaw-dropping $2 million. Proceeds from the extravagant price tag will be donated to charity.

9 Most Expensive Soccer Balls Ever Sold

9 Most Expensive Belts You Can Buy