9 of the Rarest and Most Valuable Pinball Machines

Pinball machines were mainstays in arcades around the world, even after arcade games cut into their sales in the 1980s. Most were produced in the hundreds or thousands. However, some machines never went into production or were altered special versions of other machines. Some pinball machines are one-of-a-kind collector’s items.
This list represents the 9 rarest pinball machines that collectors can buy (and some that will probably never go up for sale again). 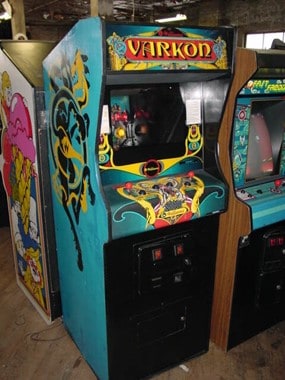 Williams was known for its arcade video games, including Robotron, Sinistar, and Defender. In that tradition, the Varkon pinball machine has an interface that mimics arcade cabinets. The pinball flippers are controlled by joysticks. The flippers are huge, 3-inch pieces on two playfields, including one kick-back lane and one pop bumper.

The game has two levels and up to 5-ball play. Notably, the balls don’t pass between playfields. Both fields are positioned away from the player’s gaze, visible through a mirror as a cool illusion, making the ball look like it’s mounted on a playfield that sits vertically like an arcade game.

Varkon’s playfield is plexiglass overlaid on wood. Behind the mirror that shows the player the illusion of the playfield, flash lamps behind screens of plastic activate to simulate lightning bolts. Tony Kraemer’s design and Seamus McLaughlin’s art really shines through in this magic fantasy-inspired machine. 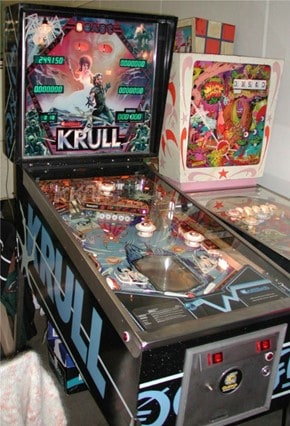 The 1983 fantasy-themed pinball machine Krull, based on the film of the same year, never entered official production. This widebody machine has 7 flippers, 6 pop bumpers, 3 slingshots, and three levels of playfield. The lowest playfield is under a transparent reducing lens. Up to 5 balls can be on the field at once.

The art designer John Trudeau recalls a prototype with a transparent field that D. Gottlieb couldn’t produce due to the cost. 10 prototypes have been confirmed to exist, though no official finished Krull machine has ever been found.

The artist Larry Day has been attributed with the Krull machine’s art, but he disputes that claim. According to him, the illustrator Keith Parkinson designed the backglass of the machine. The designer of the playfield has never been revealed. 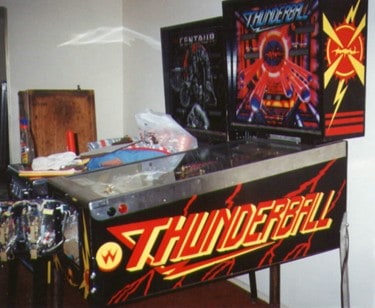 Williams Electronics, the arcade game manufacturers behind Joust and Defender, made this pinball machine in 1982. Thunderball, which is not named in reference to the James Bond film, is a fantasy-themed machine. Only 10 units are confirmed to exist, but the weird thing is that Thunderball never actually went into production.

According to Williams’ technical support technician at the time, James T. Hawes, Williams made these machines as engineering samples, including four on-location test games. As a result of the machine’s experimentation, Thunderball is something of a legend among pinball machine collectors.

Thunderball has 2 flippers, 2 pop bumpers, 10 standup targets, and more. The game is 2-player with a timed multi-ball that allows up to six balls to be put in play at once. A button on the side of the cabinet allows players to switch the sides of the ball entry depending on the players. 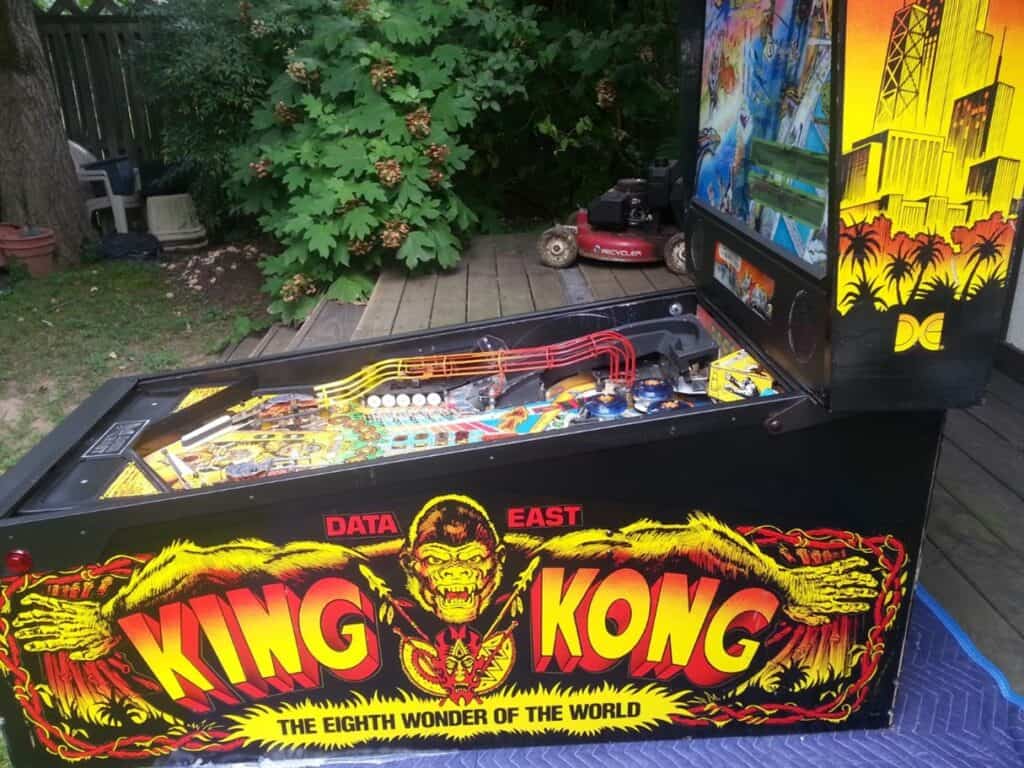 The King Kong pinball machine by Data East Pinball was made as a sort of spiritual successor to a much earlier machine made in 1931. However, that old one had 450 units flying off the shelves, whereas this 1990 version was restricted to 9 units.

It’s a relatively simple machine, with 3 flippers and 3 pop bumpers. It was designed by Jerry Armstrong with art by Kevin O’Connor and music and sounds by Brian Schmidt.

The voice actor and video game composer Brian L. Schmidt did voices for the King Kong pinball machine. His other credits with Data East Pinball include Back to the Future: The Pinball, Teenage Mutant Ninja Turtles, The Simpsons, Star Wars, Jurassic Park, Batman, and more. 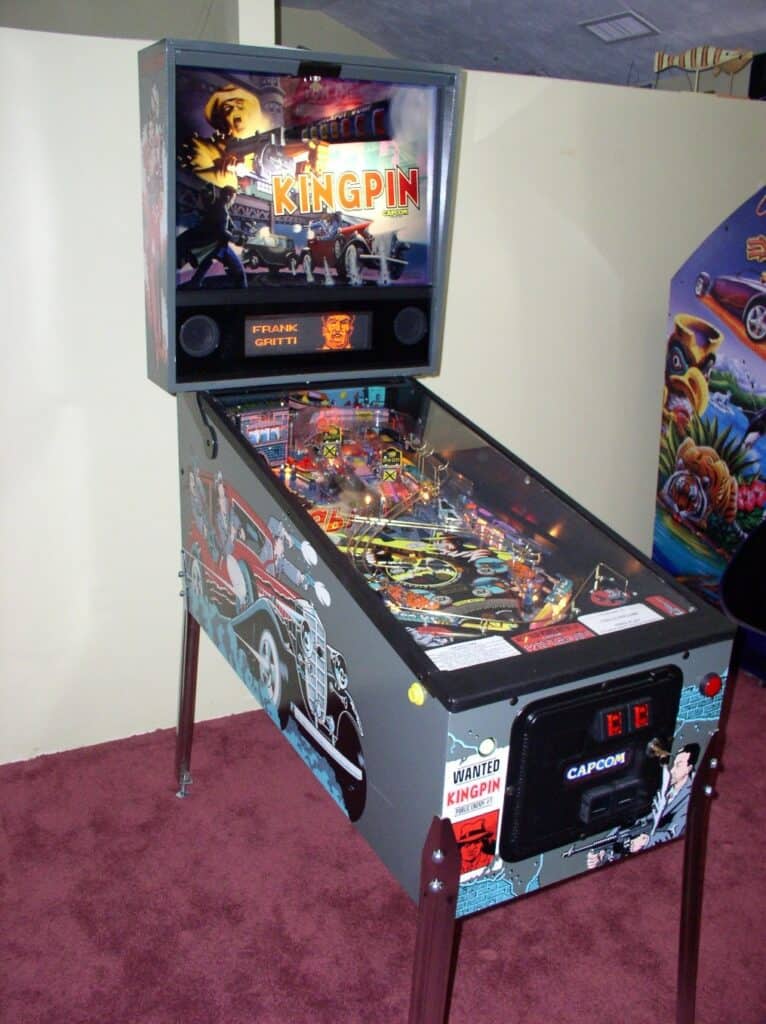 photo source: This Week in Pinball

Kingpin was made by Capcom Coin-Op, the pinball manufacturing subsidiary of Capcom, the electronics company better known for video games like Mega Man and Resident Evil. They only made 9 total units of the Kingpin pinball machine. It features multiple ramp entrances with spinners as well as a Sudden Death mode. This allows players to continue if they make a few trick shots; otherwise, the next player gets a go.

The machine was designed by Mark Ritchie with art by Stan Fukuoka.

The pinball machine was the last made at Capcom before they shut up shop. Though Flipper Football was technically the last one conceived, Capcom rushed it into production to make sure it got out. So Kingpin ended up being the last game they made. 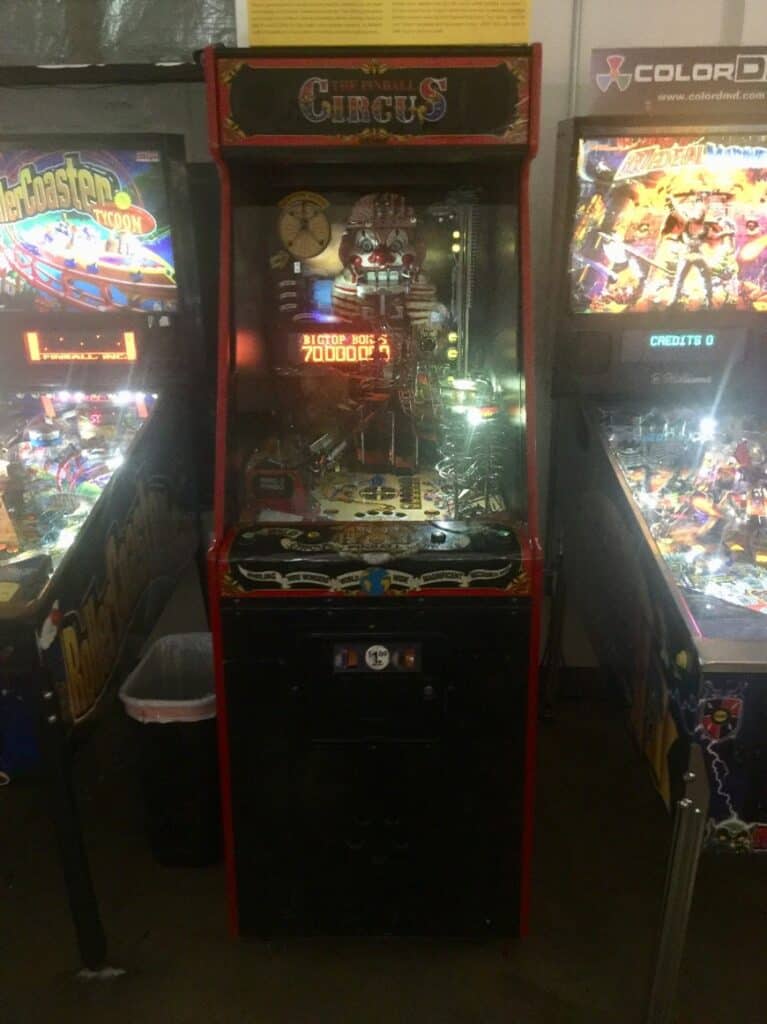 photo source: This Week in Pinball

The Pinball Circus is insanely rare. Only 2 machines have been known to exist, though there are some rumors among collectors that the artist, Python Anghelo, made as many as 6. This multilevel pinball machine was released in 1994 by Bally, the pinball division of Midway Manufacturing Company, the guys famous for video games like Rampage and Mortal Kombat.

This machine has a lower and upper playfield, including 7 flippers, 4 pop bumpers, 3 drop targets, and 1 kick-out hole. There’s also a magnetic ball lifter at the rear ramp. A well-placed skill-shot can launch your ball to the bonus area called “the clown’s playfield.”

Designer Python Anghelo and artist Pat McMahon made two prototypes of The Pinball Circus. One is in someone’s private collection and the other is in the Las Vegas Pinball Hall of Fame. 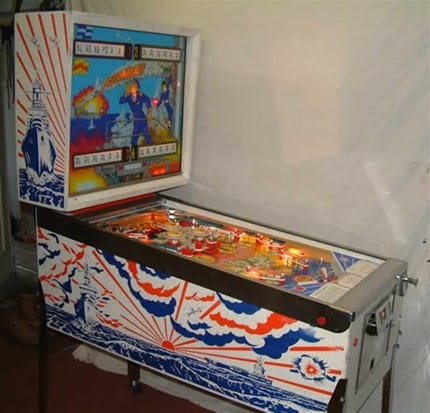 For an international entry, here’s Combat, a one-of-a-kind electronic pinball machine made by Zaccaria, a company based in Bologna, Italy. This machine was made from solid-state electronics and displayed as a prototype for the Signetics microprocessor. It showed at the ENADA show in Rome and also appeared in Automat technology magazine in Oct/Nov 1977. 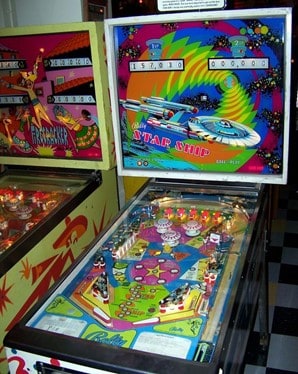 Bally has been making pinball machines since 1931, including this crazy-rare machine, which only had 1 unit produced in total. Star Ship is a sci-fi-themed machine with 2 flippers, 3 pop bumpers, 2 slingshots, and 5 bank drop targets. As one of the older machines on this list, this one is a little more low-tech.

The playfield was reused in the Bally machine, Supersonic (1979). The backglass design also shows the Enterprise, ripped from classic Star Trek.

Designer Greg Kmiec confirms that only 1 engineering sample of the Star Ship cabinet was ever built. It was reworked into Supersonic because Bally realized how much more profitable licensed machines could be. With a new designer and the Star Trek license, Bally moved on from this prototype to their next machine.

The only known example of Star Ship was sold from a gas station in Illinois in 2008, which was run by a retired Bally executive. It is now a one-of-a-kind collector’s item. 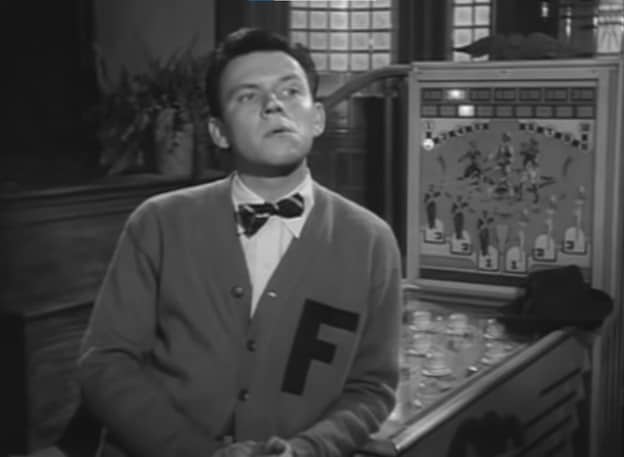 The rarest pinball machine is 1776. The single unit that exists is a modified version of the pinball machine, Showboat, which was made by the Chicago Coin Machine Manufacturing Company in 1941. This machine is relatively common, with over 1,200 units known to exist.

By contrast, 1776 was never actually produced. This American History-themed machine has 15 passive bumpers and a mechanized winning sequence. When players reached a high score, the backglass rolled away to reveal a lit 2nd layer with American flags and a patriotic tune.

This machine was discovered in an antique store in Burbank, California and purchased in 2004.

This Showboat pinball machine was modified for the film, The Time of Your Life (1948), and turned into the unique machine, 1776. That’s what makes it so rare. Willy, a character in the film known as the “Pinball Machine Maniac,” plays on this modified machine. So the owner not only has a piece of rare pinball history but also cinema history.

The rarest pinball machines represent gaming history in a traditional form that, while video games have replaced them as the go-to arcade creations, are still popular among players and collectors today. These rare machines, some of which are prototypes or ultra-rare alterations, may have only one unit in circulation. This makes them not only unique pinball machines but practically historical artifacts as well.

10 Most Expensive Makeup Brushes Ever