15 Rarest and Most Expensive NFTs Ever Sold (Updated April 2021)

NFTs or non-fungible tokens have recently taken the internet by storm and selling for millions of dollars. These unique digital assets – which are typical one-of-a-kind pieces of digital artwork or music – are sold using cryptocurrency, such as Bitcoin. Most of the NFTs on this list were sold using Ether (ETH), the value of which fluctuates depending on the current market. For whatever reason, NFT sales had a large surge in February and March 2021. Digital artists made tens of millions of dollars selling their NFTs to cryptocurrency investors and NFT collectors.

As of April 2021, the information on this list is as accurate as possible. New NFT sales are happening daily and it is highly likely that new records will be set in the future. 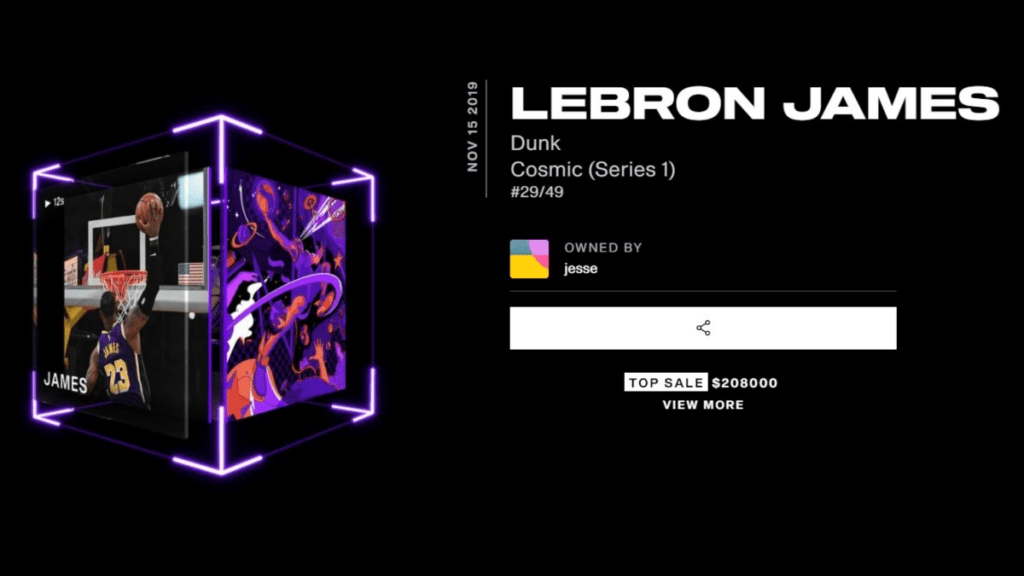 Trading cards have been popular since they were first created, so it only makes sense that they have also moved into the digital world. In 2019, the NBA, the NBA Players Association, and Dapper Labs (the team behind Crypto Kitties on Ethereum), came together to launch NBA Top Shot. These digital trading cards are sold as NFTs and just like physical trading cards, some Top Shots are rarer than others. So far, the most valuable Top Shot is LeBron James’ “Cosmic” Dunk #29. It was sold to a user named Jesse for $208,000 in February 2021. 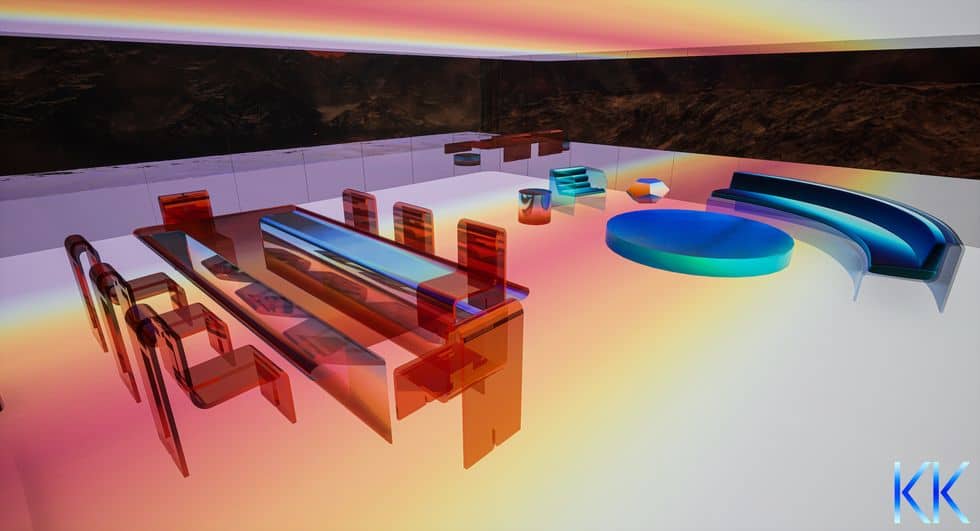 In March 2021, the world’s first NFT digital house was sold for over half a million dollars! The purely digital work, titled “Mars House,” was created by contemporary artist Krista Kim and on the NFT marketplace SuperRare for 288 Ether (roughly $512,000 at the time). Kim designed the house in May 2020 using Unreal Engine which is software commonly used to create video games. The winning bidder of Mars House now has the right to commission the furniture as physical pieces, which Kim says will be made of tempered printed glass in Italy.

Krista Kim partnered with Jeff Schroeder of The Smashing Pumpkins to create a calming musical accompaniment for Mars House. 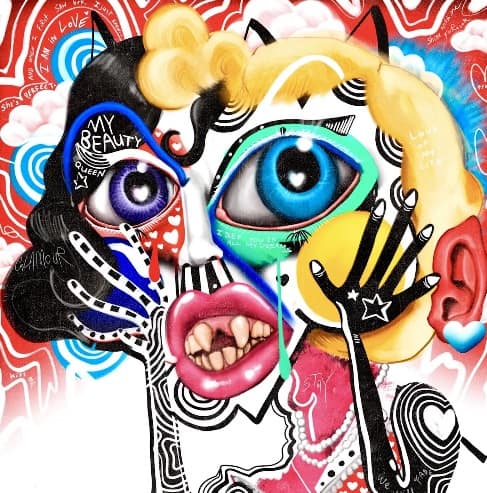 Teenage NFT artist FEWOCiOUS rose to fame in 2020 and has quickly amassed a multi-million dollar fortune selling their work. On March 5, 2021 FEWOCiOUS set a personal record with the sale of The EverLasting Beautiful. The piece was sold to crypto investor and influencer Jason A. Williams for $550,000. 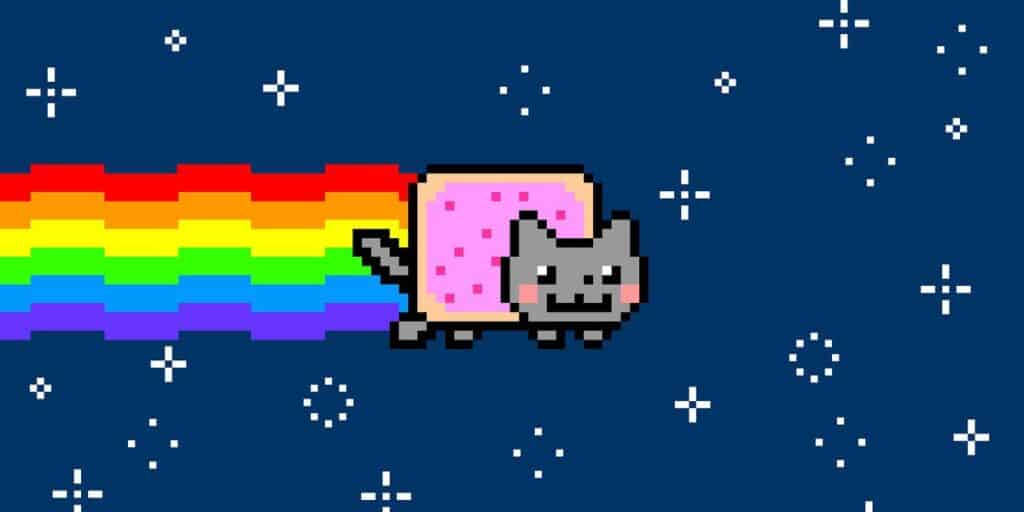 Recently, an NFT of Nyan Cat, the popular internet meme of a flying cat with a Pop-Tart body, was sold by its original creator Chris Torress for nearly $600K. Torres first created Nyan Cat back in 2011 and posted the video to YouTube, where it quickly went viral. To celebrate Nyan Cat’s 10th birthday, Torres decided to wade into the world of NFTs. The winning bidder was anonymous and Torres says that they will most likely be the sole owner of Nyan Cat as he has no plans to sell additional copies of the image. While the winning bidder owns this updated image of Nyan Cat, Torres still retains the rights to license and monetize the famous Pop-Tart cat. 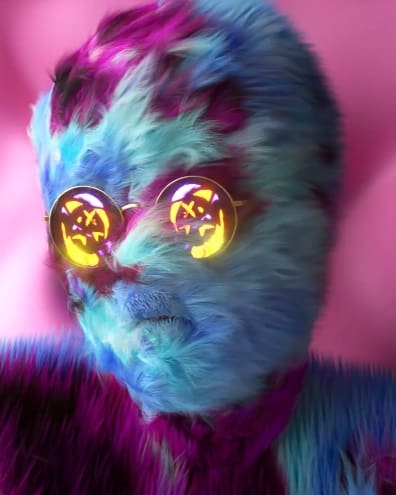 The former T-Mobile CEO John Legere is known for his eccentricity and he has been keeping busy lately by buying up some music related NFTs. In early March 2021, Legere purchased an NFT from musical artist Steve Aoki titled “hairy.” It’s a 36 second-long video, featuring music by Aoki and was created in collaboration with digital artist Antoni Tudisco. Hairy was part of a larger NFT collection released by Aoki that brought in a total of $4.25 million, with Legere’s purchase as the biggest of the lot.

As long as winner of the “hairy” bid did not sell the NFT for two weeks, they received Infinite Objects physical display screen. 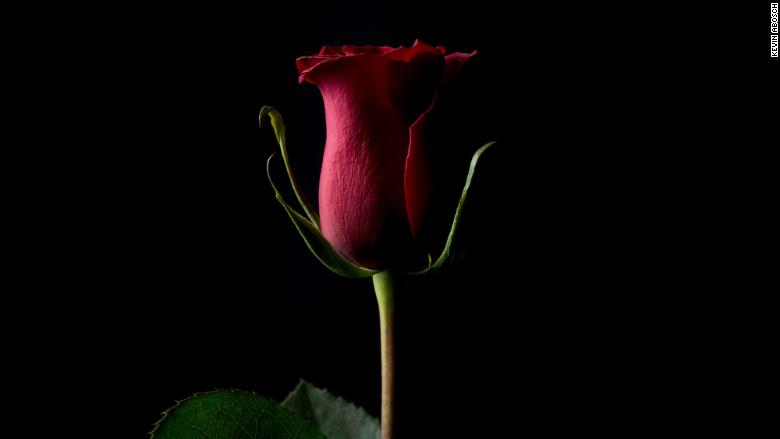 Back in 2018, before NFTs were all the rage, artist Kevin Abosch was one of the first people to sell a piece of crypto-artwork for a large sum. Abosch’s Forever Rose was sold on Valentine’s Day in 2018 to a group of 10 art collectors for $1 million. Forever Rose was produced in collaboration with GIFTO, a virtual gifting platform on blockchain. The 10 collectors who bought the artwork include leaders and investors in the crypto world, such as ORCA Fund, Future Money and Ink and TLDR Capital. The money raised by the sale of Forever Rose was donated to the CoderDojo Foundation, an organization that offers free computer programming clubs for young people.

Kevin Abosch had previously sold a photograph of a potato for €1,000,000 in 2015 to an anonymous businessman from Europe. Potato #345 is one of the most expensive photographs ever in the world. 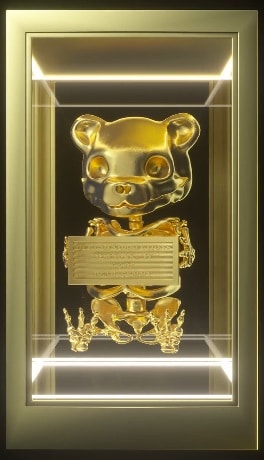 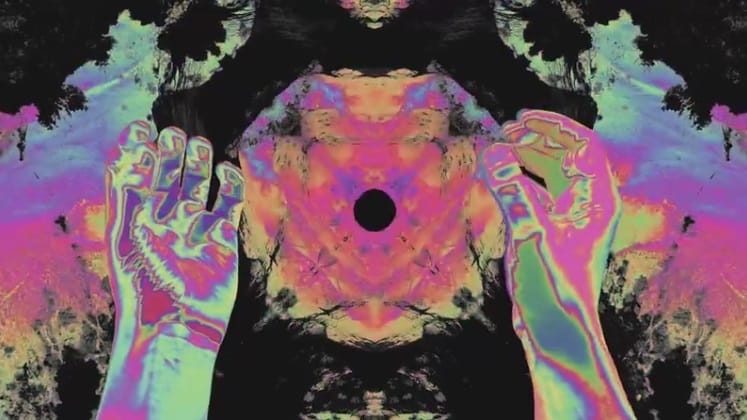 In mid-March 2021, a single piece of music NFT made history when former T-Mobile CEO John Legere bought the naming rights to a piece by 3LAU (Justin Blau) and digital artist Slime Sunday. Legere won the bid on Nifty Gateway for $1,333,333.33. At the time, this was the largest auction final amount in Nifty Gateway’s history. There was a bidding war between John Legere and Nifty Gateway user Pablo, who sold the digital piece CROSSROAD by Beeple for $6.6 million, which was originally purchased in 2020. 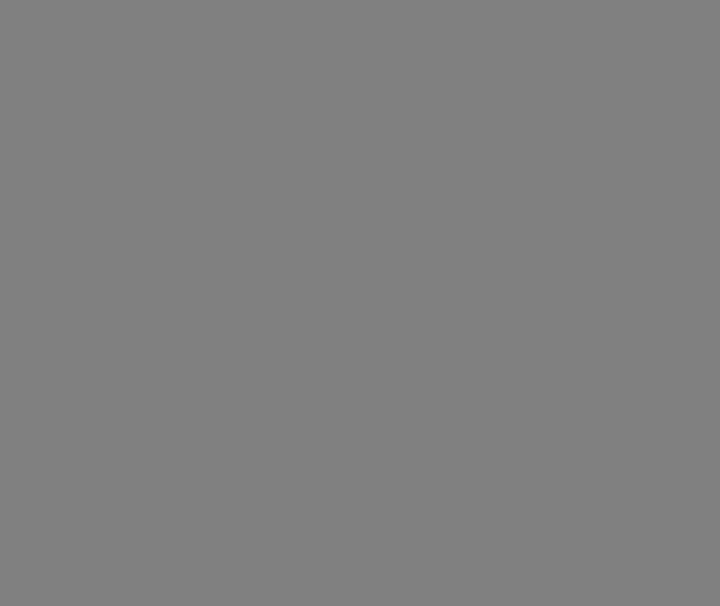 As if the sale of NFTs couldn’t get any more mind-boggling, digital artist Pak sold a single gray pixel for an eye-popping $1.36 million. The Pixel was part of a larger collection of NFT artwork by Pak sold by Sotheby’s. The sale of all the pieces yielded nearly $17 million. Some of the pieces had more than one edition, resulting in the large total sale amount.

The Pixel sparked a 90 minute bidding war and eventually went to a man named Eric Young. 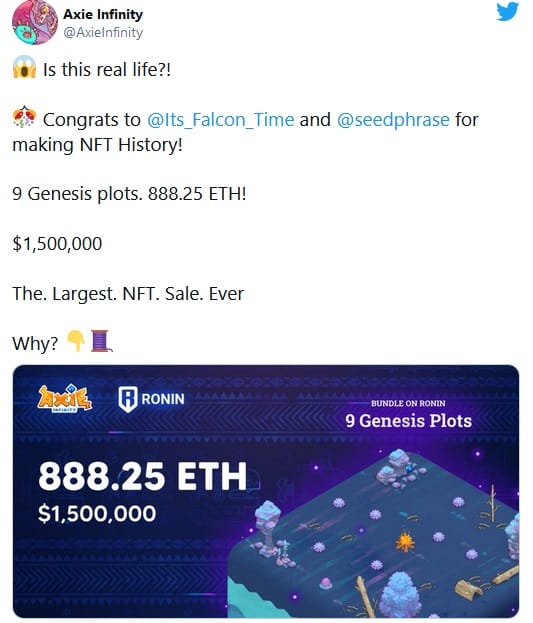 Prior to record-breaking NFT sales in March 2021, in early February of this year, a user on blockchain marketplace and gaming platform Axie Infinity set a record when they sold an estate of nine adjacent Genesis blocks for 888.25 ETH, about $1.5 million. At the time this was the largest NFT transaction and it is the most valuable virtual land sale ever. The Genesis land plots are special and rare because they are supply capped. They will also have prime positioning in the upcoming new Axie Infinity game mode, Axie Land.

In a tweet following his purchase of the Genesis plot, Flying Falcon said, “As Genesis land plots are the rarest and best-positioned plots in Axie Infinity they were a natural fit for my thesis. What we’re witnessing is a historic moment; the rise of digital nations with their own system of clearly delineated, irrevocable property rights.”

Almost exactly 15 years later, Twitter CEO Jack Dorsey sold his very first tweet as an NFT. Dorsey had put the tweet up for sale in early March and said that he would end the bidding on the tweet’s 15th anniversary of March 21st. Sina Estavi, the CEO of Malaysian blockchain service Bridge Oracle, had been the leading bidder and put in the winning bid of $2,915,835.47 on the afternoon of March 22nd. Dorsey converted the winning bid into bitcoin and donated all of it – minus the five percent taken by the bidding platform Valuables by Cent that Dorsey used to sell the tweet – GiveDirectly for its Africa Response. GiveDirectly is a charitable organization which gives money directly to people living in poverty.

To show that he was sincere about his promise to donate the money he made, Jack Dorsey tweeted a copy of his receipt to GiveDirectly. 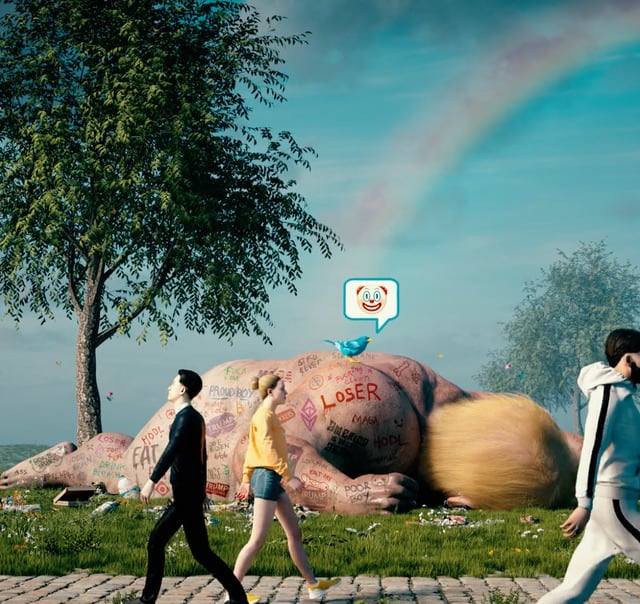 Just a few weeks before Beeple made history with the sale of Everydays: The Last 5000 Days, another one of his pieces, CROSSROAD, was sold on the secondary market for $6.6 million. Beeple originally released CROSSROAD on Nifty, an website that sells and curates “Nifties” (digital artwork sold as NFTs), at the end of October 2020. The piece was sold to a user named Pablo for $66,666.60 and just a few months later, Pablo accepted an offer from an anonymous bidder for $6.6 million.

CROSSROAD is a dynamic (moving) piece of digital art Beeple created in response to the 2020 U.S. Presidential Election. Depending on the outcome of the election, one of two videos – one featuring a victorious Trump, the other featuring a despondent one – was set to play. 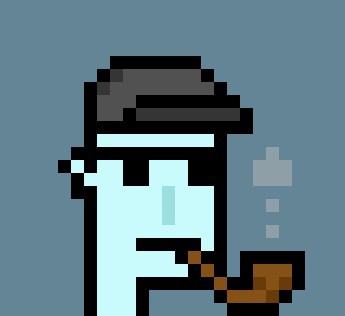 A day before another CryptoPunk broke its record by about $10,000 CryptoPunk #7804 was a brief moment, the most valuable CryptoPunk ever sold. Like its record-breaking sibling, CryptoPunk #7804 is one of nine Alien punks. It was purchased by Dylan Field, CEO of software startup Figma, back in January 2018 for a little less than $15,000.

After keeping watch on a a CryptoPunks Discord channel, Field accepted a bid from an anonymous Twitter user known as Peruggia for $7.57 million. Field also owns a range of digital artworks, including more CryptoPunks and work by Beeple. 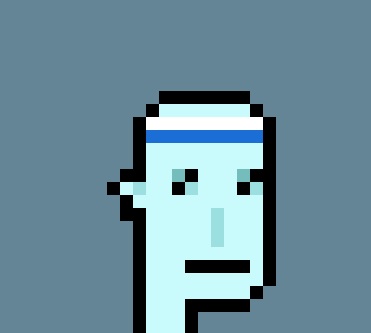 While artist Beeple was making history, in a different corner of Internet another historic NFT sale was taking place. A CryptoPunk (#3100), which are some of the world’s first NFTs, was sold to an anonymous bidder for 4,200 Ethereum (ETH), about $7.58 millon. CryptoPunk #3100 is one of only nine Alien punks, which added to its rarity. It had been listed for sale by its owner on January 23, 2021 and there were numerous bids between $1.7 million to $2.19 million before the record bid of $7.58 million. 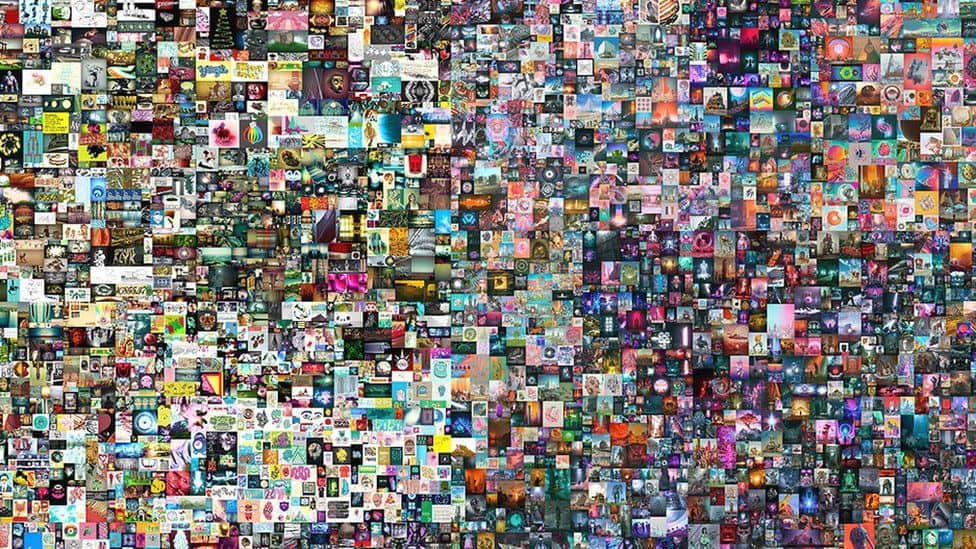 On March 11, 2021, the artist known as Beeple (Mike Winkelmann) made history when a collection of his work titled Everdays: The First 500 Days was sold by famed auction house Christie’s for a whopping $69.3 million, making it the rarest NFT ever sold (so far) in the world. While NFTs have been a thing on the internet for a few years, the sale of Everdays: The First 500 Days made international news and brought NFTs into the lives of everyday people.

The NFT is a collection of Beeple’s daily artworks spanning from May 1, 2007 until just before the work was sold. The images are arranged in a loose chronological order and feature figures from many facets of pop culture. Everydays was purchased by Vignesh Sundaresan, a programmer based in Singapore and the owner of Metapurse, known by his pseudonym MetaKovan.

In addition to being the rarest and most valuable NFT, Everydays: The First 500 Days is the third-most expensive work by a living artist, behind Jeff Koons’ Rabbit and David Hockney’s Portrait of an Artist (Pool with Two Figures), which are both worth over $90 million.