8 Rarest and Most Expensive G.I. Joe Figures Ever Made

G.I. Joe is the perennial boy’s toy to match the success of Barbie and give little kids access to all the wartime play-pretend they’ve ever wanted. From video games to comics and cinematic blockbuster garbage, G.I. Joe has been represented by all kinds of media. But the figures are the main attraction.

For collectors, some of the vintage G.I. Joe figures are worth thousands of dollars. These are the 8 rarest ones out there, including when they were made and the special features of each figure that set them apart. That’s if you take them out of the box, of course (in some cases, you shouldn’t). 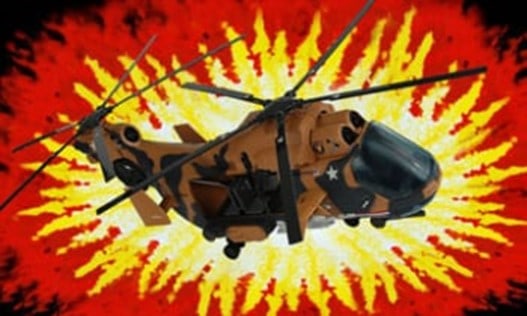 The G.I Joe Tomahawk defined 1980s awesomeness despite having a bit of a short existence. That makes the figure even more collectible, however. Since Tomahawk was only sold for two years between 1986 and 1988, lingering in European markets for maybe another year or so, it’s increasingly difficult to get your hands on.

This figure is a helicopter that comes complete with removable seats, missiles, spinning helicopter blades, and a pilot. In the box, this figure retails to collectors for around $350. Even loose and pre-owned, depending on the condition, it can fetch $100-$250 in online auctions. Take special care to note the condition of the blades and whether the toy comes with the detachable missiles or seats when buying this toy used. Missing parts may be behind a price that seems too good to be true.

The pilot of the Tomahawk is a dude named Lift-Ticket and this toy was the exclusive chance for anyone to actually get him. He was packaged with the Tomahawk from ’87-’88 and remains an important part of the set for collectors. His inclusion drives a big chunk of the price at auctions. 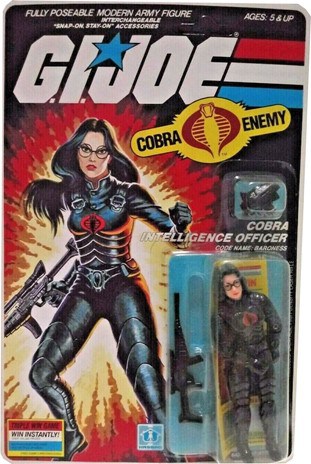 The Baroness, Cobra Intelligence Officer, was first released in 1984, including a special action force card. However, she was discontinued in 1986, which has driven up her value.

Her head swiveled left and right but not up and down (the “swivel ball” wouldn’t be introduced until 1985). After the original toy faded out, Takara released it in Japan in ’86. India then picked up the mold and created a version made of low-quality plastic. There was also a red variant called Rednok, which can also sell for a few hundred bucks in its own right.

Baroness sells in-box to collectors for $450.

Many G.I. Joe figures reused parts from other toys due to how similar they were. Many “Joes” and other commandos were repurposed molds or pieces from past versions, usually painted differently to set them apart. By contrast, the Baroness was a completely original sculpt. They reused her in 1997 to make the next version of the figure. 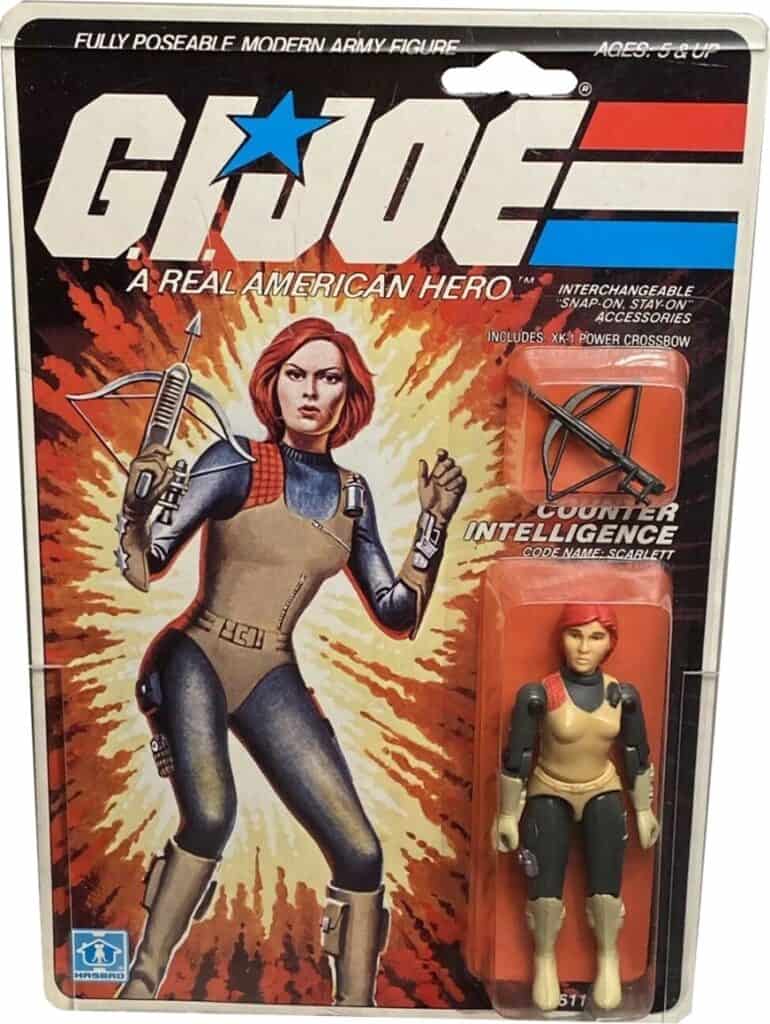 Scarlett is part of the first series of G.I. Joe figures in 1982. She had “straight,” non-posable arms just like the other 15 figures in the first series. She came with her own action card too, which informed buyers that her backstory involved being trained by her martial arts family before joining ranger school and covert ops. She’s now an awesome crossbow sniper (and a pricey collectible).

Buying Agent Scarlett in the box will set you back nearly $600 if the latest eBay auctions are any indication. Since she was the first female figure in the G.I. Joe figure series, her body parts are all unique and original. Versions were released abroad in Brazil and Argentina. There are also slight variations in shape and color for a JCPenney exclusive gift pack version, but differences in value seem to be negligible.

G.I. Joe figures have peg holes on the feet so they can be combined with platforms, playsets, and other things. However, Scarlett’s feet are flat plastic with no holes. According to collectors, she’s the only G.I. Joe figure ever to not include them. No one knows why. 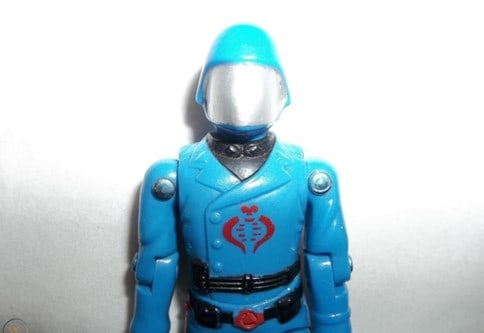 This Cobra Commander is nearly identical to the series one figure sold by the thousands, with one difference. It’s the infamous “Mickey Mouse” variant. This refers to the earliest version of the Cobra Commander, which had a poorly painted logo. The top of the design was filled in, making it look like Mickey Mouse’s ears.

The file cards were also slightly different for the original Cobra Commanders. Unlike the glossy coverings of the subsequent issue, the original file cards had the appearance of rough cardboard. 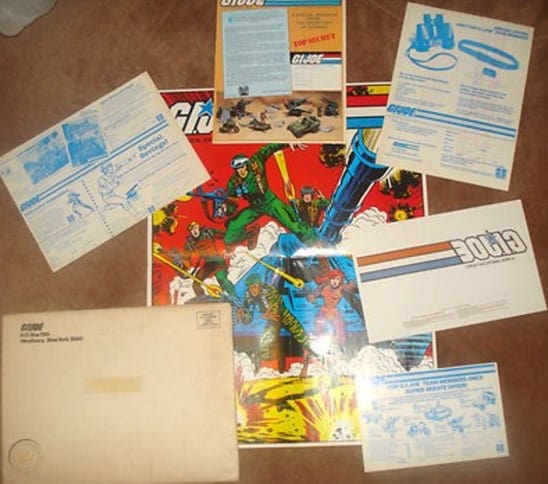 While this isn’t a “figure,” exactly, we figure that anyone reading this article would be interested to know about the G.I. Joe Mobile Strike Force Team Membership Kit, particularly the rare 1982 version. Kids that wanted to LIVE G.I. Joe, rather than merely play with it, could send in a Super Rebate Offer that was “for members only” by filling out a flyer from a magazine.

The reason the price is unknown is that completed Membership Kits rarely go up for auction. The state of completion for these kits is difficult to judge, but the main item was a full-color poster called the Stars and Stripes Forever Poster. There were also flyers with savings and offers, a membership card, a newsletter, and other goodies.

Sold, completed membership kits are difficult to find. One currently on eBay at the time of writing has been listed as $6,082 and even includes the original mailing envelope. However, just because it’s listed that high doesn’t mean anyone will buy it.

Membership kits existed for a lot of brands, including the Lone Ranger, Justice League, Buck Rogers, etc. (remember the Ovaltine one from A Christmas Story?). The G.I. Joe one is interesting because it’s so late to the party. These kinds of kits were more common in the 1950s. 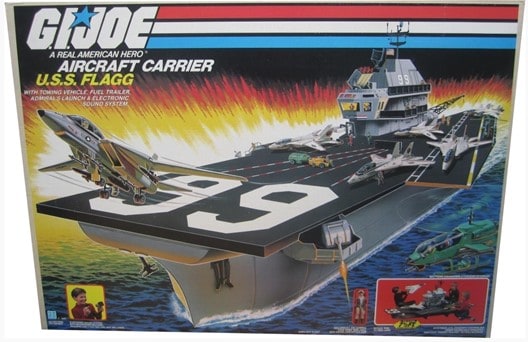 The U.S.S. Flagg boxed set was only sold between 1985 and 1987. It came with the aircraft carrier and accessories as well as the pilot, Keel-Haul. He was packed exclusively with the Flagg.

As with any set, this one had a million parts to keep track of, including vehicles, missiles, towers, flags, and other bits. As a result, pre-owned figures sell for wildly different prices depending on their level of completion. However, a 90% completed U.S.S. Flagg can go for a couple thousand.

New and in-box, it sells for upwards of 7k.

The pilot, Keel-Haul, was over-manufactured. Leftovers were sealed in bags and sold to weird places like Chuck E. Cheese and carnivals to be used as prizes. Other than buying the U.S.S. Flagg, kids may have gotten Keel-Haul by winning a Skeeball game in 1993.

The set includes an attack vehicle (VAMP) dragging a heavy artillery laser (HAL). They didn’t come with any figures, but they had small pieces like two gasoline cans and a steering wheel that easily got lost.

Some versions of this set may be even more valuable. A mail-in variant included a shovel molded on the front of the car. The VAMPS sold separately did not include this, making the exclusive Sears set the one to get. 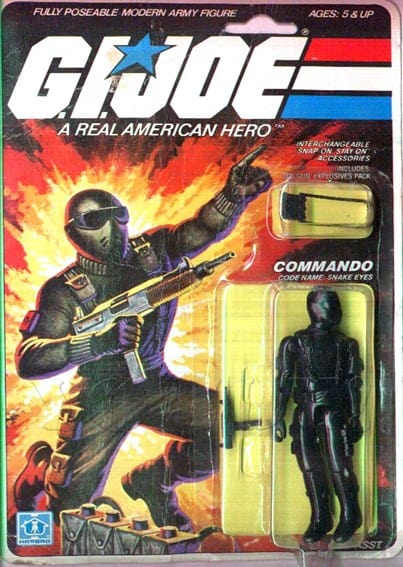 The rarest GI Joe figure is Snake Eyes in series two. This 1983 figure recently sold at an eBay auction for $12,900, making it the most valuable G.I. Joe we’ve seen. It wasn’t a best offer auction, either – it was a transparent bid. We know exactly how much it sold for.

This variant had accessories and was one of the coveted “Explosion Backs,” which had Coming Soon ads on the back because pictures of new figures weren’t available yet. Other versions of this figure sell for a lot, a few thousand even, but never this much.

We think that this figure being “unpunched” is the difference. This means that even the small cut-out piece of plastic that pops off when you hang these figures on store shelves has never been punched out, giving this figure a level of newness that no figures can match.

The series two Snake Eyes was a re-release that replaced his straight arms with ones that could swivel. He also has a Hasbro logo on his belt, which the first version didn’t.

G.I. Joe figures have always been cool. Nowadays, they can also be incredibly valuable, which is extra cool. Some of these can be worth a few hundred dollars even pre-owned so it’s worth going through your closet and looking for them. Collectors that want the rarest in-box, however, will need to back it up with some serious bank.

8 of the Rarest Beatles Albums Ever Made