TVs are no longer the luxury they were 100 years ago, when no one had even heard of them. Even by the late 1940s, only several thousand homes in the United States had one. Today, they’re necessities, basically foregone conclusions. It’s far rarer to see a home without one than with one.

But just because the default television is no longer a luxury doesn’t mean that they can’t be recreated into luxury collector’s items if you try hard enough. Over the $100,000 mark, TVs start to become incredibly lavish. As the price keeps increasing, the technology becomes more advanced, and the decadence gets out of control.

Keep reading for the 8 most expensive TVs that you can buy. 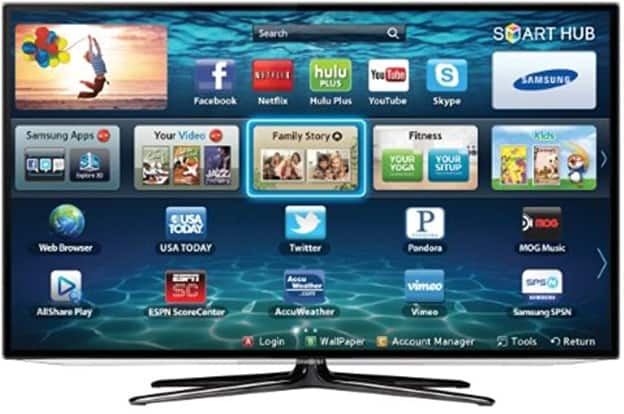 The Samsung UN46ES6100 is a smart TV capable of 1080p resolution with a slim LED screen. It debuted in 2012 and has since been eclipsed by much more advanced televisions. You will also see that as the price increases on this list, the size of the TVs increases as well (for the most part). However, this Samsung screen will still cost you a cool $125,000.

The screen utilizes CMR technology to calculate the frame refresh rate and backlight to improve image quality. This makes the TV a favorite for people who enjoy fast-moving images, such as for certain sports and certain genres of movies.

CMR or clear motion rate is an important factor to consider when buying a Samsung TV. The stat combines the backlight panel accuracy, image processor, and refresh rate. The image repetition rate determines the real value of the screen’s Hz, even apart from the number listed. For instance, a 100 Hz screen can have a higher CMR when other factors of the screen’s technology are considered. This Samsung UN46ES6100 has a CMR of 120, which is considered high. 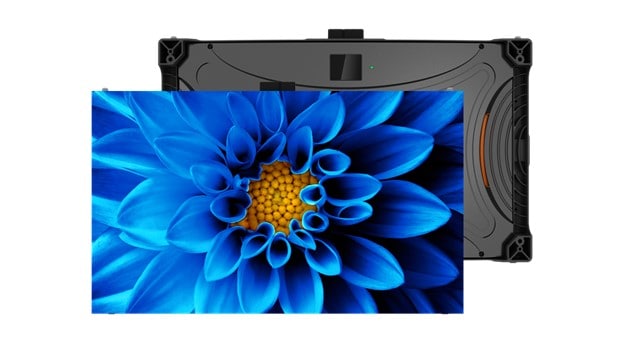 The 219-inch, Ultra HD diagonal video wall by Planar comes with a Z6 controller and wall mount. It can be purchased for $234,000.

The Planar TVF series televisions are fine-pitch wall displays available in several pixel pitches. Planar designed these displays to be multi-functional and easy to setup and install in stores. They have a stackable design that makes vertical alignment easier.

The profile of Planar TVF screens is less than three inches, making it easy to stack monitors and fit in various places in the store. These TVs can be upscaled to 8K resolution.

Planar Systems has been around since 1983, beginning life in Oregon as a spin-off subsidiary of Tektronix. Planar was the first company to make EL or electroluminescent screens in the U.S. 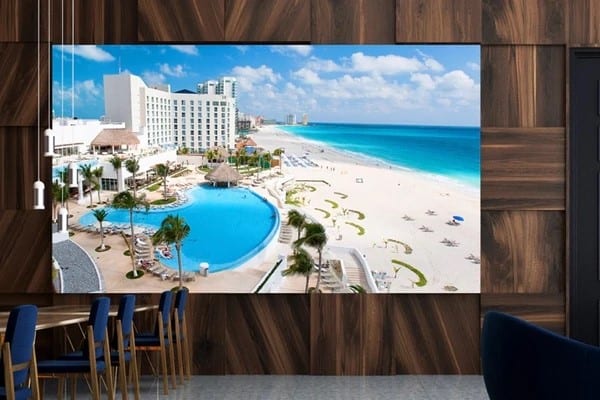 The Samsung F-IW008J is a MicroLED display that comes with a bundle of Samsung accessories. The 146” television bundle will cost you $401,584. This screen was intended to display products in retail stores or hotel lobbies. VIP suites in hotels or conference rooms can also make great use of a Samsung screen like this.

This TV comes with an S-Box Signage Player that enhances your visual displays and seamlessly connects to your other devices. The screen also comes with a mount frame kit as well as the ability to set up separate 4×4 modules for customized displays.

The Korea-based electronics company, Samsung, is one of the most successful in the world. However, it was founded in the 30s as a fish and grain exporter. Broadcast television wasn’t common in Korea until the 1970s, at which point Samsung formed a subsidiary called the Samsung Electronics Group. They created their first TV, a little black-and-white set called the P-3202, in late 1970. In six years, they had sold over a million sets. Today, they make $200 billion per year on their technology sales.

Alexander Swatek, Jakob Odgaard, and Jorn Sterup formed C Seed Entertainment Systems in 2009. In 2013, they unveiled the first unfolding MicroLED television, engineered to be stored outdoors and activated from the floor. When activated, the 5-meter TV unfolds from its mechanism and becomes a luxury outdoor television. Despite its compact construction, it makes no concessions for sound or image quality.

Luxury TVs like this are rarely weatherproof, which is why this 165-inch television screen costs $680,000.

C Seed’s headquarters are in Vienna, Austria, though they have a branch office in Los Angeles where they show off new tech. Alexander Swatek alone has over 10 display technology patents to his name that he brings to bear on new inventions for C Seed (you’ll be hearing about them again before this list is over). 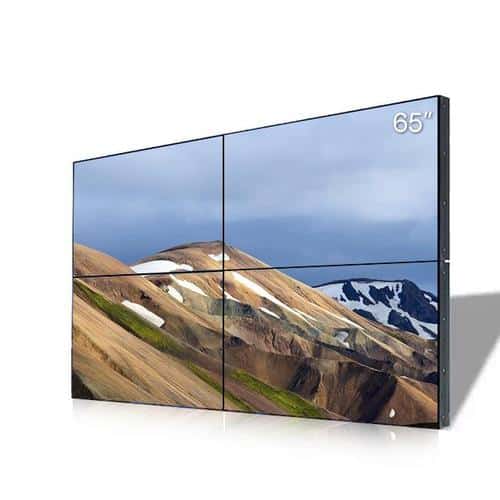 The LCD Video Wall by Kuanbo is a 700-nit, 65-inch monitor that can display up to 4K UHD or 3840×2160 on the high end. On that end, the TV costs about a million bucks and is best used to display products in high-end malls or stores.

It’s a BOE panel, meaning it was built by Beijing Oriental Electronics Group Co. Like most of their devices, this screen prioritizes smart device integration. BOE is one of the largest manufacturers of OLED panels in the world and has reportedly built over 15 million in 2021 for Apple products alone.

Kuanbo is a Chinese-based electronics company, one of the leads in the country in terms of commercial digital displays. It is a subsidiary of Hong Kong’s Huake Limited and creates screens fit for medical institutions, businesses, government agencies, public transportation sectors, and even the military.

The C Seed 301 is one of the world’s biggest televisions, which may be why it boasts a price tag of $1.5 million. However, it’s the technology that makes this thing a luxury innovation in entertainment technology, which you can tell not only by the size but the weight. The frame is made from titanium and carbon fibers to prevent it from being weighed down too much, but it still comes in at a hefty 3,637 pounds.

The C Seed 301 is capable of displaying 4,500 nits. Combine that with 48-bit color depth and the C Seed 301 can display masterful picture quality even in outdoor conditions. Packed with 281 trillion colors and supporting up to 4K resolution, this is television technology at its absolute finest.

The real showcase of the C Seed 301 is that it can be stored in an underground storage casing. When activated on the user’s remote, the TV takes 25 seconds to unfurl to its full 19-foot majesty, silently and seamlessly becoming the high-tech television of your dreams at the push of a button. 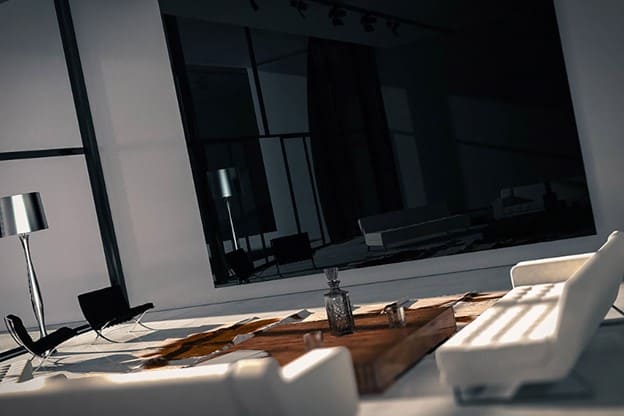 The Titan Zeus is aptly named when you get a look at this 370-inch 4K television, which is only fit for a huge room or an outdoor cinema area. Not only is the Titan Zeus one of the biggest TVs on this list, it’s also one of the heaviest, weighing almost 2,000 pounds.

The Titan Zeus is capable of displaying 65 billion colors at 4K resolution, stretched across its 26-foot-long screen.

Titan Screens, the company that made the Titan Zeus television, offers add-ons that make the TV perfect for outdoor viewing. For those with backyard cinemas or even poolside movie theaters, the Titan Zeus screen is bright enough to show clearly even in the direct sun. Titan Screens sealed the screen so tightly that it also has limited waterproofing capabilities.

The most expensive TV is the PrestigeHD Supreme Rose television. You may have noticed that as we’ve ascended in price on this list, the TVs have gradually increased in size. However, for the most expensive TV on the list, the size has dropped back down to that of a normal, nice-sized living room set at 55”, less than 1/6th of the size of the previous entry.

This is because the PrestigeHD Supreme Rose TV finds other ways to increase its value. This includes a frame and base sculpted by Stuart Hughes from 18-karat rose gold, in an amount equal to 28 kg. There are two frames before you get to the screen. The outermost frame is embedded with 72 1-carat flawless round-cut diamonds on a backdrop of amethyst and sunstones. The inner frame is handstitched from high-quality alligator skin.

To own this TV, complete with all its bling, will cost you $2.27 million.

Stuart Hughes has designed similar high-brow electronics with his signature shiny style, including a $60,000 iPod. For those who don’t quite have the $2.27 million required to own the PrestigeHD Supreme Rose, Hughes also offers a less extravagant model, the PrestigeHD Supreme, which has less gold and fewer diamonds and a price tag of $1.5 million.

Most of the world’s most expensive televisions gauge their price on pure functionality. The ability to watch TV on screens 100, 200, or even over 300 inches big is a modern marvel. Some even stow in containers and unfold at the press of a button, display vibrantly even outdoors, and contain more colors and higher fidelity than any visual displays in history.

Of course, once we got to the top pick, it had to be someone who made a TV from gold and diamonds to steal the top spot. Whether you’re looking for a vibrant screen or a glitter around the frame, use this list to decide what to do with your next million bucks.