9 Most Expensive RC Cars Ever Sold

RC cars at a professional level can be expensive sports toys and collectibles, even though cheaper variants can be bought as toys at nearly any toy store. Whether you want to collect rare vintage RC buggies or buy modern racing models to compete professionally, we assembled this list of the 9 most expensive RC cars to give you the options you need to make an informed decision. 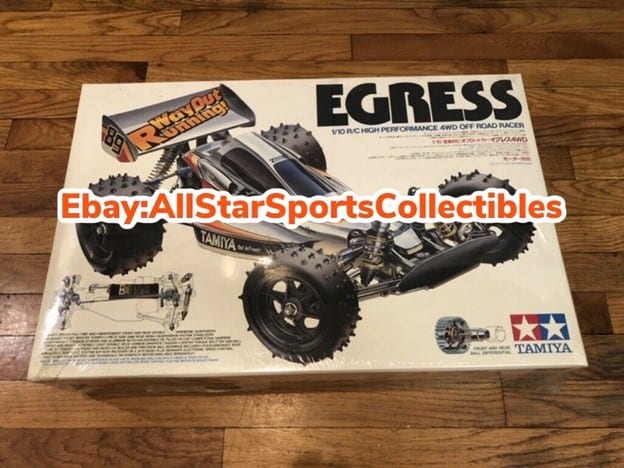 The Egress Vintage RC Buggy Kit listed here is currently for sale on eBay for $5,500. It was originally bought at the Tower Hobbies toy retailer in 1990 (manufactured in 1989) and according to the seller has never been opened.

The Egress Buggy has always been a favorite of Tamiya fans. Just recently in 2021, Tamiya announced the model’s re-release updated from the previous re-release in 2013.

Tamiya is a Japanese toy and plastic scale model manufacturer that was formed back in 1946. In addition to toys, they also sell paints, airbrushes, and other model accessory tools. 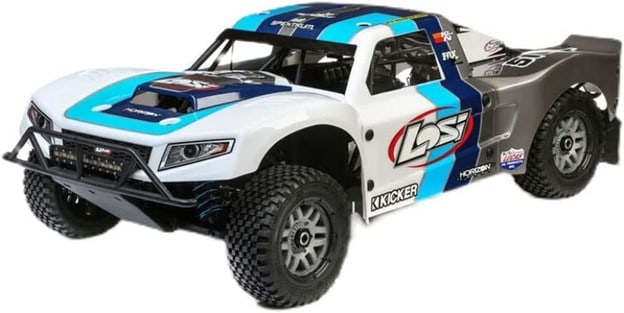 This 1/5 scale desert short truck RC car is powered by an 800CC fuel engine. It can reach high competitive speeds for offroad, professional racing games. 1/5 scale is significantly larger than the average RC car and is designed for outdoor entertainment venues and park races.

The car features independent shock absorbers on each of the spiral-spring wheels, which gives the car a suspension system with superior elasticity and shock absorption.

Spiral Spring wheels are relatively new inventions, which were only patented in 2020. They consist of a ring spring and leaf spring assembly with an outer surface that tucks under the ring spring, creating a clockwise spiral shape. 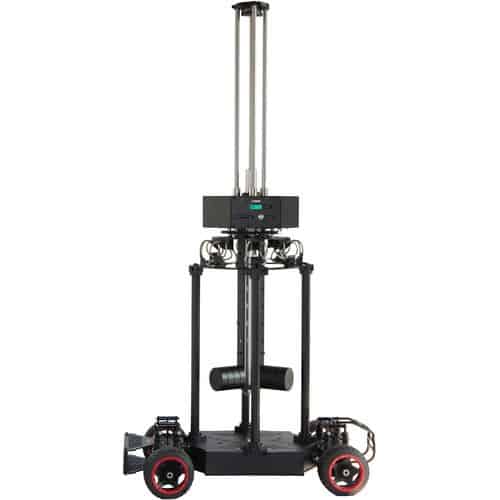 The Cinegears RC 4×4 VR Gimbal Car is a unique RC car model with a pneumatic assist that reaches a height of 4.9’. These kits give you the ability to wire and customize your car yourself. This gimbal car can be fitted with all manner of imaging technology.

The flat top of the car can carry other pieces of tech, including cameras, drones, or other payloads. The gimbal car can handle up to 33 pounds. It has a wheel spread of 23” and a 3-point suspension system.

This allows your Cinegears gimbal car to carry your load with the weight distributed evenly, even at the RC car’s top speed of 25mph.

Cinegears hit the market in 2010, using their Wireless Follow Focus tech to revolutionize consumer-grade radio-controlled cars. They have asserted themselves as a leader in wireless technology, which includes their own Wireless 5G scanner and redundant ghost-eye wireless video transmission kits. 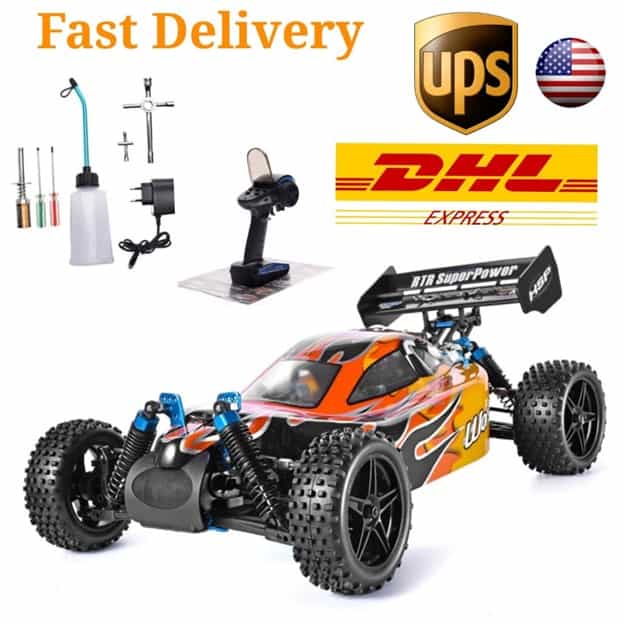 This RC car by HSP is a nitro gas-powered remote mini buggy-style vehicle, 1:10 scale with the real thing. It has a two-speed transmission and a full 4WD system, including front and rear differentials. It even has high-quality bevel gears, universal joint cuts, and high-performance ball bearings.

Its disc brake system has replaceable pads, which is good because you’ll be making a lot of quick maneuvers with this mini buggy. Its lightweight aluminum flywheel provides extra quick response times.

HSP Diesel is best known for high-quality car parts distribution, everything from nitrous to filters to intake elbows. This RC buggy is a mini expression of their devotion to high-quality parts manufacturing. 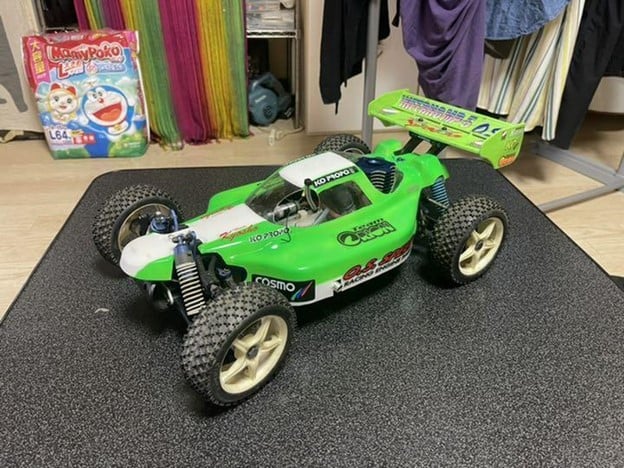 The Kyosho Inferno Efrano is a 1:8 scale RC car powered by a .21 engine for 4WD drive. Its chassis has a buggy set up to give it some offroad capabilities.

It was released for the 30th anniversary of the brand in a limited edition, originally selling for 137,500 yen or the equivalent of about $1,000.

Now, there’s an example new-in-box being sold on eBay with additional spare power parts and tools for $12,332.57. Just like the original, this car comes with special wheels, a custom wing and fuel tube, linkage and clutch parts, and commemorative decals.

We’re not positive that this listing is technically worth that much, but since you can buy it for that, this limited-edition car makes it onto this list with a value of $12,332.57.

Kyosho was founded by Hisashi Suzuki in 1963 and has been making RC cars since 1970. They are the major competitor for Tamiya in Japan. However, they have avoided splitting the market by diversifying. 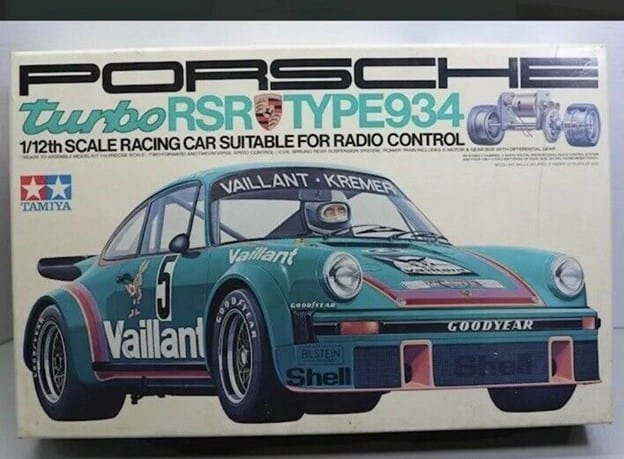 The teal blue car, which in real life was sponsored by Vaillant and Goodyear, is presented here as a 1/12-scale RC version of the racer, with the 934 chassis.

The car was first made available in 1976 and was sold until being discontinued in 1980. It was originally sold in Japan for 9800 Yen and is made from high-impact Styrol to promote durability.

This Porsche Turbo RSR 934 was Tamiya’s first RC car model. They took the body used for the car from their most popular static model kit and plated it with aluminum to create this durable RC chassis. 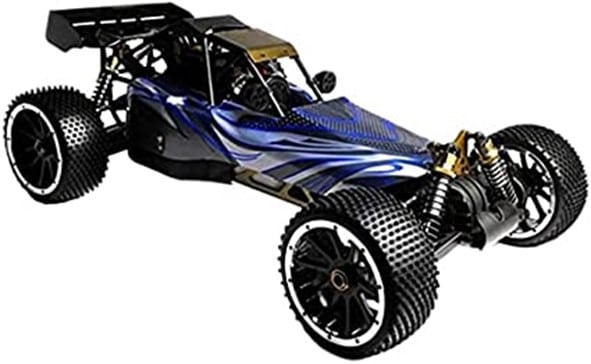 This 1:5 scale Rock Crawler RC car may be small, but it’s equipped with differential 4WD. It has an actual oil tank with a 700CC capacity, sealed like a full-size car engine and connected by oil pipes.

The steering gear is a metal servo inside the aluminum alloy chassis and bottom plate.

This RC car also has a shock-absorbing bracket that protects the car from damage through collisions and normal impacts. The four shock absorbers themselves are made from aluminum and are full of oil. This RC car by WKLIANGYUANPING sells on Amazon for $15,592.

This little RC car is built to last, with a 4mm-thick aluminum chassis, high-resistance throttle servo, 1500mAh battery, and a total weight of almost 28 pounds. 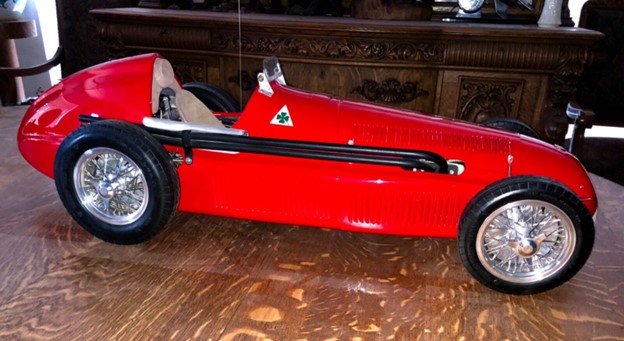 The Jeron ¼ Scale Alfa Romeo Tipo 159 is a 2WD RC car from 1951, designed after the Alfa Romeo racer. It’s a famous Formula 1 racing car that dominated its circuits back in the day, winning 33 total Grand Prix championships.

The ¼-scale RC version weighs 35 pounds and is 42” long. It comes with crazy mechanical amenities for an RC car inside that little aluminum body.

Alfa Romeo was founded in 1951 in Milan, Italy to create Formula 1 racers. “Alfa” stands for its original founding name, which was “Anonima Lombarda Fabbrica Automobili.”

The most expensive RC car is the Vision Mercedes-Maybach 6. It is 6 meters long, which you may recognize as the length of an actual car.

Apparently, no one ever said a remote-controlled car had to be a scale model! Mercedes-Maybach decided to fulfill everyone’s secret dream and create a full-sized RC car.

This concept car is powered by four magnet synchronous electric motors, one for each year, with a total of 750 hp. The vehicle has a state-of-the-art interior with an active windscreen and 360 views.

The car has never been manufactured and sold in high numbers, instead being a show car for events.

Its price is undisclosed, but since the actual Maybach Vision 6 is worth upwards of $200,000, it stands to reason that this RC version is worth even more.

Maybach was part of Mercedes until 2012 when it merged fully into Mercedes-Maybach, which is now used exclusively for the high-luxury, enhanced versions of other Mercedes cars. This includes the GLS 500 SUV and S600.

8 Most Expensive Hotels Currently in Chicago