10 Most Expensive Marvel Cards Ever Sold

The Marvel Universe was born of comic strips and characters developed by Stan Lee, Jack Kirby, and other creatives. The famous world of villains, alien gods, and mutant teenagers was originally found only in print, but it eventually expanded to film as iconic series like Spider-Man and The Avengers were born.

Marvel is probably most famous as a film franchise today, but the brand is also behind a variety of trading cards.

With this list, we’ll look at the most expensive Marvel cards in the world, including rare vintage sets from the ‘60s and more modern designs from the ‘90s. Keep reading to learn more! 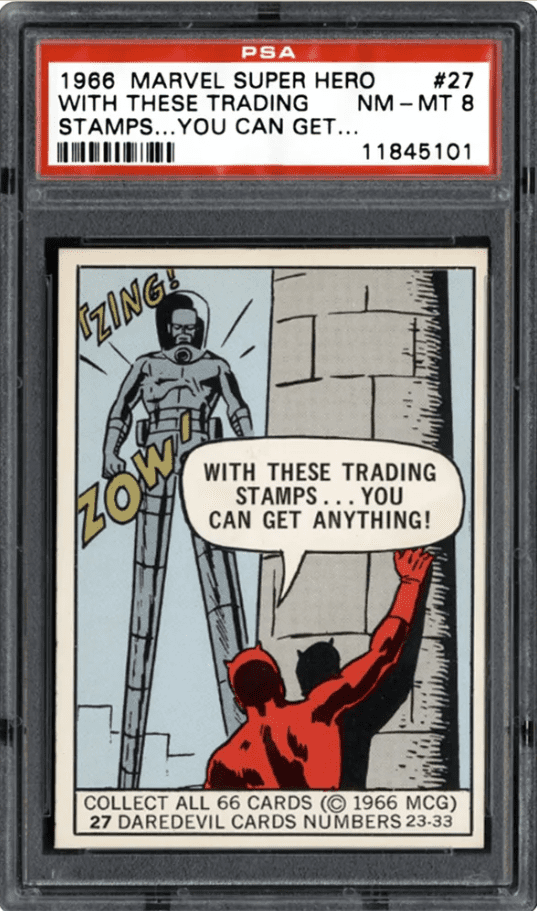 Kicking off our list is a card from a collection launched in 1966. The collection included 66 unique cards, including this one featuring Daredevil. Each card was labeled so buyers knew which were missing from their sets. This one was #27.

The collection included six marvel characters, each assigned 11 cards. Some fans collected all 66 while others just focused on their favorite character. 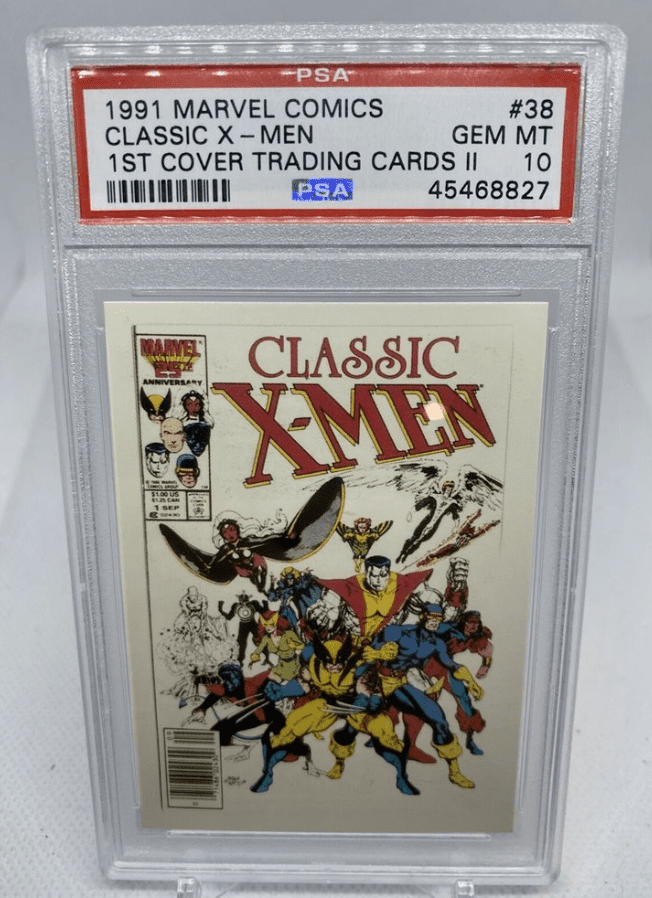 Coming in at number nine is a newer Marvel card with a vintage design. The Classic X-Men from 1991 features a vintage X-Men logo reminiscent of the early days of the series.

Stan Lee, the creator of several Marvel superheroes, introduced the world to X-Men comics in 1963.

The first X-Men movie was released decades later, and Stan Lee told reporters the series was “a good metaphor for what was happening with the Civil Rights Movement in the country…[during the ‘60s].”

Today, the Classic X-Men Marvel card is worth about $190.

In the original comics, the X-Men are led by Professor X, a telepath dreaming of peace and understanding between mutants and humans. 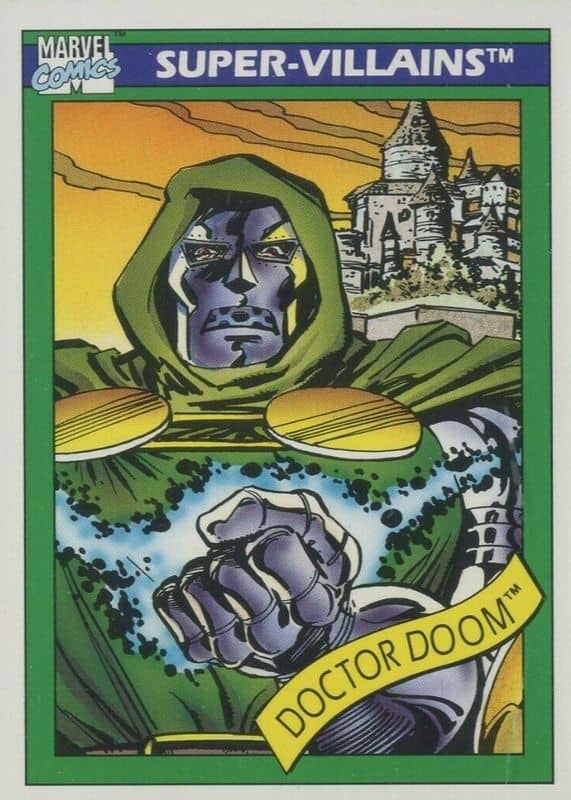 According to Marvel lore, Doctor Victor von Doom was born in “the small European nation of Latveria,” a fictional country. During his childhood, Doctor Doom discovered a collection of mystical objects owned by his mother, setting him on a “path of darkness” that would one day lead to the overthrowing of Latveria’s monarchy.

In 1990, a Marvel trading card featuring Doctor Doom was introduced. The modern value of the card varies a lot, but some examples in excellent condition sell for about $300. Others can go for as much as $600 or more!

Doctor Doom’s father was killed by a king.

Approx. Value: $450
Card Year: 1990
Card Feature: Loki in his original uniform
Marvel Fact: Marvel cards feature statistics about the character on the back 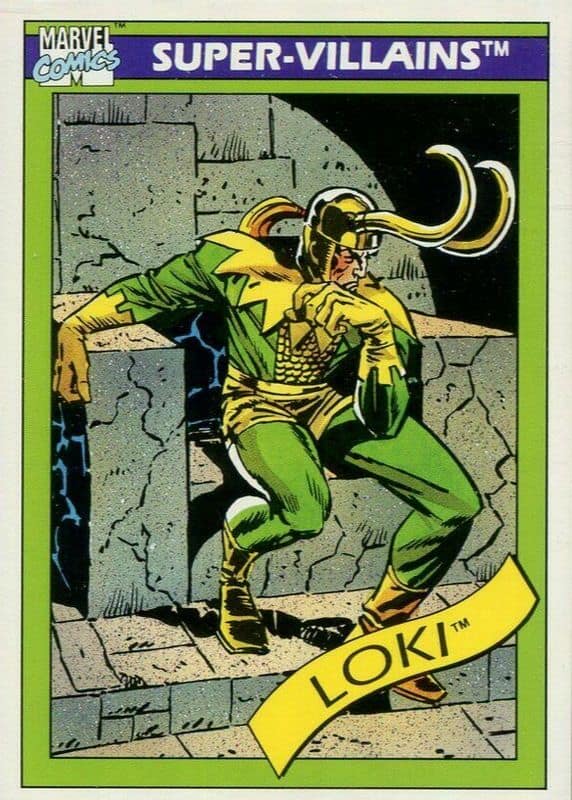 Coming in at number seven is a card featuring one of Marvel’s most famous characters: Loki. The Prince of Asgard, Loki is a power-hungry character in the original comics driven by his “glorious purpose.”

Loki’s powers include astral projection, telekinesis, and other awe-inspiring energy manipulation. The alien god is also gifted with high intelligence, which he often uses against his adoptive brother Thor throughout the modern Marvel film series.

Marvel says Loki’s powers include shape-shifting and hypnosis. These manipulation powers are paired with his skill in combat to make Loki a threatening foe. 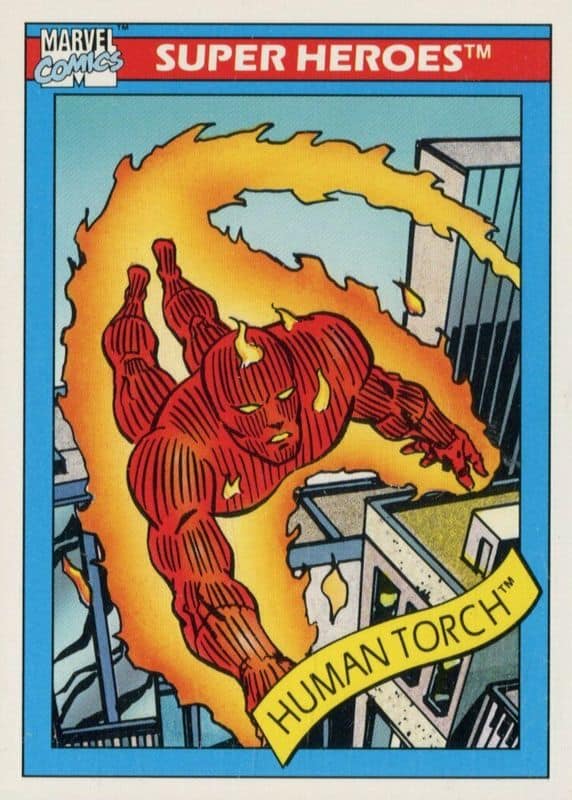 According to Marvel lore, Jonathan Storm was a normal teenager until a scientist took him into outer space, exposing him to high levels of radiation.

The exposure could have been deadly, but instead it transformed his body into a powerful and fiery form. Known as Human Torch, Jonathan became part of the villain-fighting Fantastic Four.

In 1990, Marvel released a trading card featuring Jonathan Storm as Human Torch blazing above the streets and skyscrapers. The card is worth up to $525 today, but some examples in rough condition sell for about $200.

Human Torch made his debut in 1961 with the release of Fantastic Four comic #1. 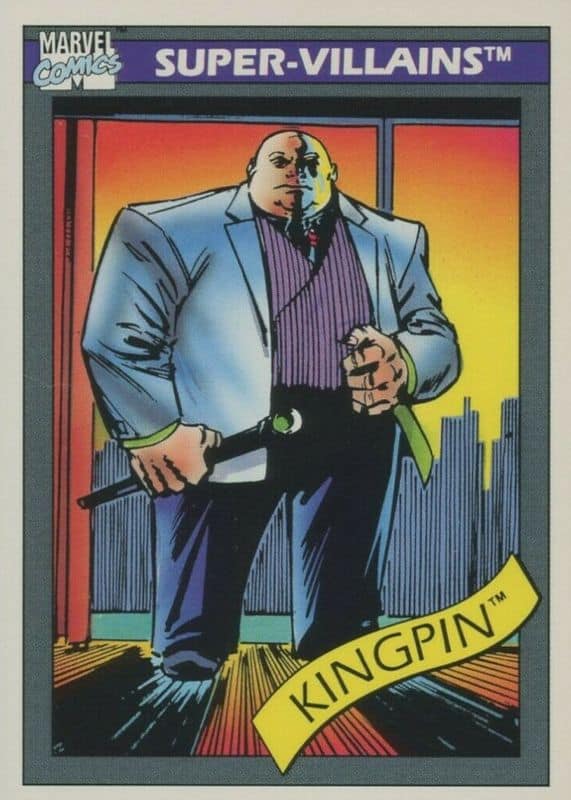 Most of the world’s priciest Marvel cards feature superheroes, but this one features a villain. Wilson Fisk, a.k.a. Kingpin, was introduced in 1967 within the Amazing Spider-Man series.

Kingpin had a troubled childhood, and he committed his first murder at the age of 12. The villain soon became the leader of the dangerous East Coast mobs.

Kingpin said he would run the mob like a business, wreaking havoc as he did: “The underworld will now be run like a business… and the chairman of the board will be… the Kingpin!” 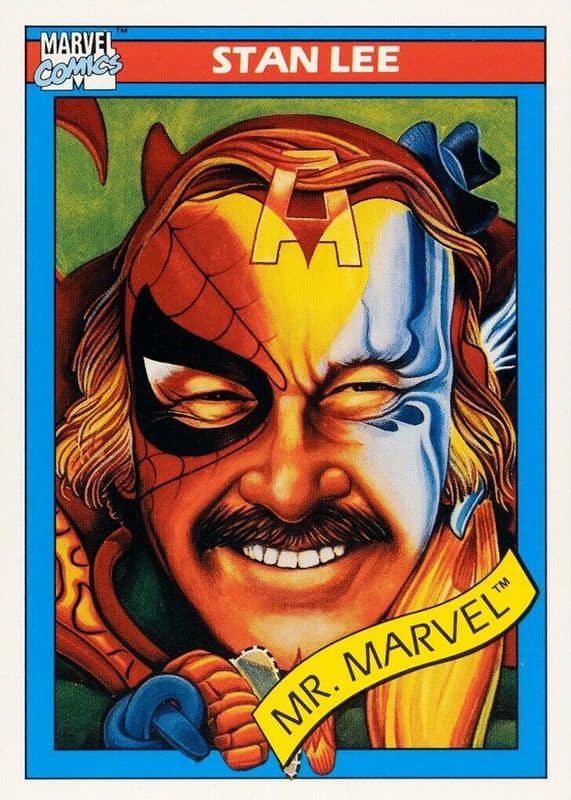 Stan Lee is arguably one of the most important figures in the world of superheroes. The visionary creator played a key role in developing the Marvel Universe and beloved characters like Spider-Man, Thor, and Doctor Strange.

In 1990, Marvel made a trading card to celebrate Stan Lee. The unique design features “Mr. Marvel” combined with several iconic characters alongside a special-edition card logo.

Today, Stan Lee’s special edition Marvel card is worth up to $750.

Before his death in 2018, Stan Lee made regular cameos in Marvel films. The icon will continue to pop up in future Marvel movies thanks to “digital technology and archival footage” according to reports. 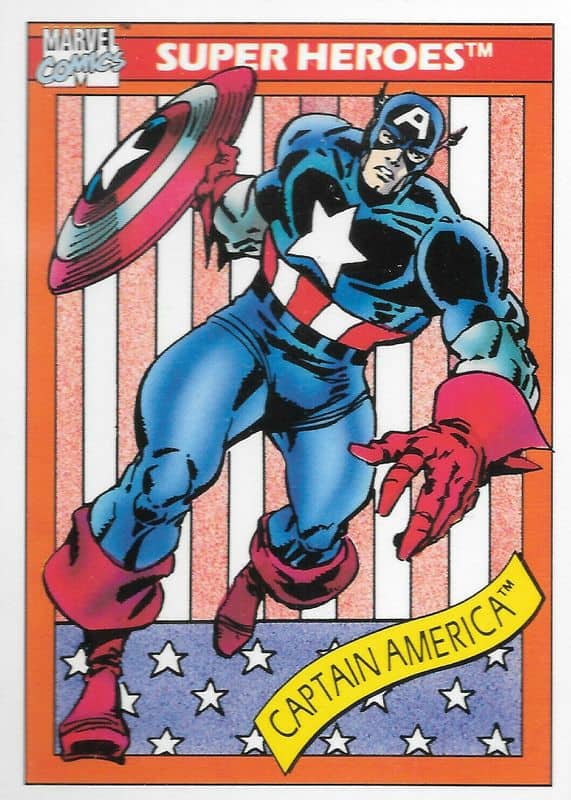 Captain America made his debut in March 1941, just months before the U.S. joined WWII. The patriotic character was created by Jack Kirby and Joe Simon for Timely, which later became Marvel.

In the original comics, Steve Rogers is rejected when he tries to join the military due to his small stature. The undergod eventually finds success as the subject of a top-secret experiment.

The experiment turns Rogers into the powerful Captain America, a strong and diligent soldier who “embarks on a career of enthusiastic Nazi-bashing.”

Recent estimates say the 1990 Captain America Marvel card is worth up to $750. Would you pay that much?

Captain America is known as the First Avenger. 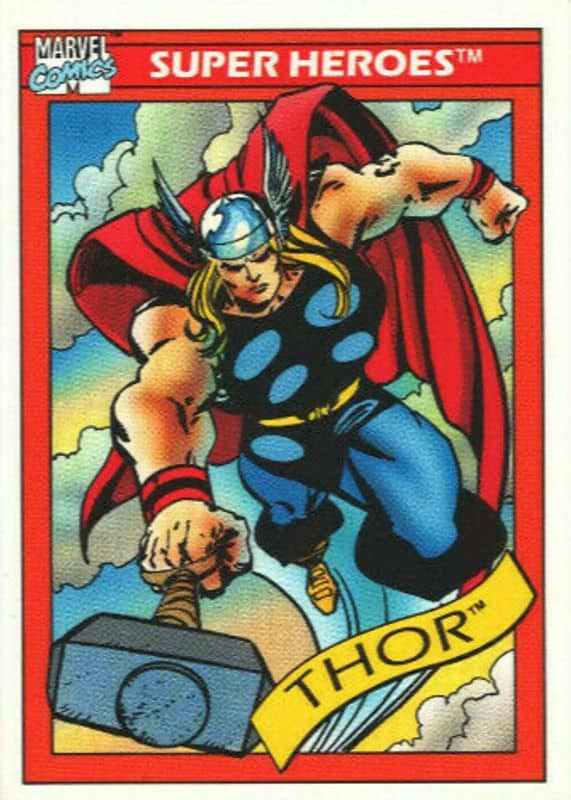 Coming in at number two is Thor, the iconic God of Thunder. The god made his debut in 1962 as part of Journey into Mystery no. 83. Thor was developed by Jack Kirby and Stan Lee, with Kirby creating the art and Lee developing the character’s story.

In 1990, Marvel released the Thor trading card featuring the God of Thunder alongside his iconic hammer. Thor flies through the air wearing his classic uniform while the card features the classic “Super Heroes” text along the top edge. The card is valued at up to $1,000, making it the second most expensive Marvel card in the world.

In the comics, Thor is introduced to readers as Dr. Donald Blake before he transforms into the God of Thunder. 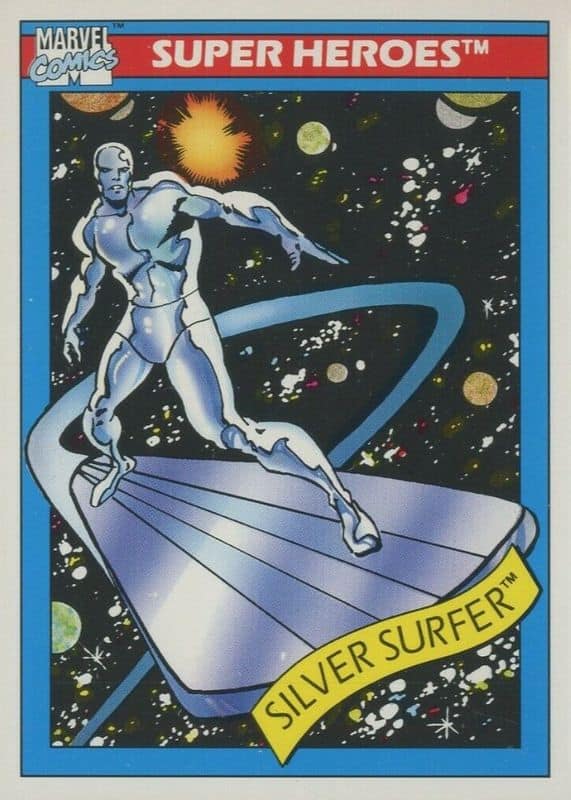 Silver Surfer (1990) is the most expensive Marvel card in the world.

Valued at up to $1,500, the Silver Surfer Marvel trading card from 1990 is easily the most expensive Marvel card on the market. The design features Silver Surfer cruising through space as stars and planets dance around him. Marvel calls Silver Surfer “One of the noblest and most tormented cosmic entities in the universe,” a character that “treasures freedom above all else.”

Sports Card Investor, a site tracking the value of Marvel cards, says Silver Surfer is worth about $230 on average. The highest sale recorded was $1,500, while the lowest was just $1.68. Variations of the 1990 Silver Surfer, like the holographic edition, can sell for over $100.

9 Most Expensive Houses Currently on the Market in Connecticut