10 Rarest and Most Valuable Disney Pins Ever Created

Disney pins have become a phenomenon all on their own. Since 1999, Disney enthusiasts have purchased and traded these pins at various events and parks around the world. Typically, pin traders don their pins on lanyards to display them to other enthusiasts and, potentially, make a trade. While all the Disney pins are well crafted works of art, some are rarer (and more valuable) than others. Seeing the pins as a fantastic marketing opportunity, Disney has produced several pins on small limited edition runs. These pins range from affordable to extravagant in price, but all are great additions to any pin collection.

Year Made: Unknown, but prior to 2007
Film Reference: “Alice in Wonderland”
Cost: About $30 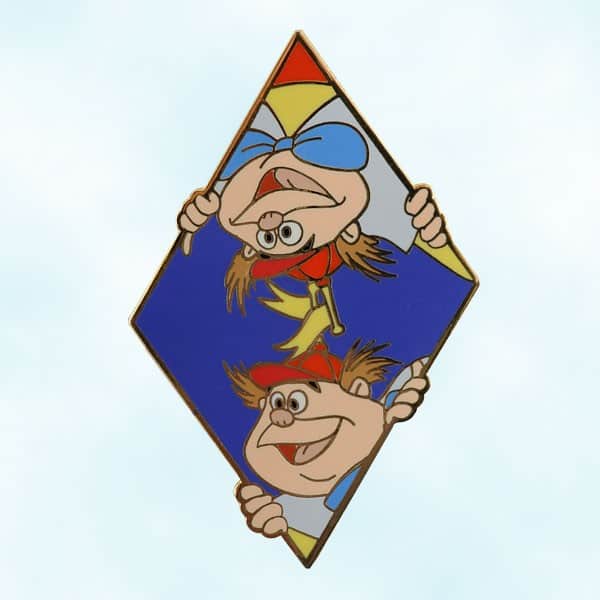 This pin was a limited edition 500 run for Disney Auctions, a now defunct branch of the Disney brand. It is handcrafted and features Tweedles Dee and Dum opposite each other framed by a diamond shape. While it isn’t too expensive yet, other exclusive Disney Auctions pins run for thousands of dollars now, so it is possible it will increase in value in the coming decades.

The characters of Tweedles Dee and Dum didn’t originate from Lewis Carroll’s novel “Alice in Wonderland,” but from a poem by John Byrom. 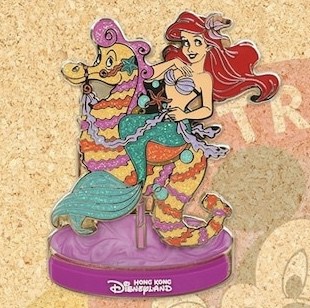 The 2018 Ariel Carousel pin was part of a 300 limited edition run at Hong Kong Disney that also included Dumbo, Aurora, Marry Poppins, and other beloved characters riding carousels. During its 2018 release, people had to queue up at Hong Kong Disneyland’s main street to purchase  them and were only permitted two pins per person from the collection. It features Ariel riding a yellow seahorse in her mermaid form.

Disney has a list of rules for pin trading. Some guidelines include what makes a pin acceptable for trading, which pins must be traded as a set, and how many pins you can trade at a time. 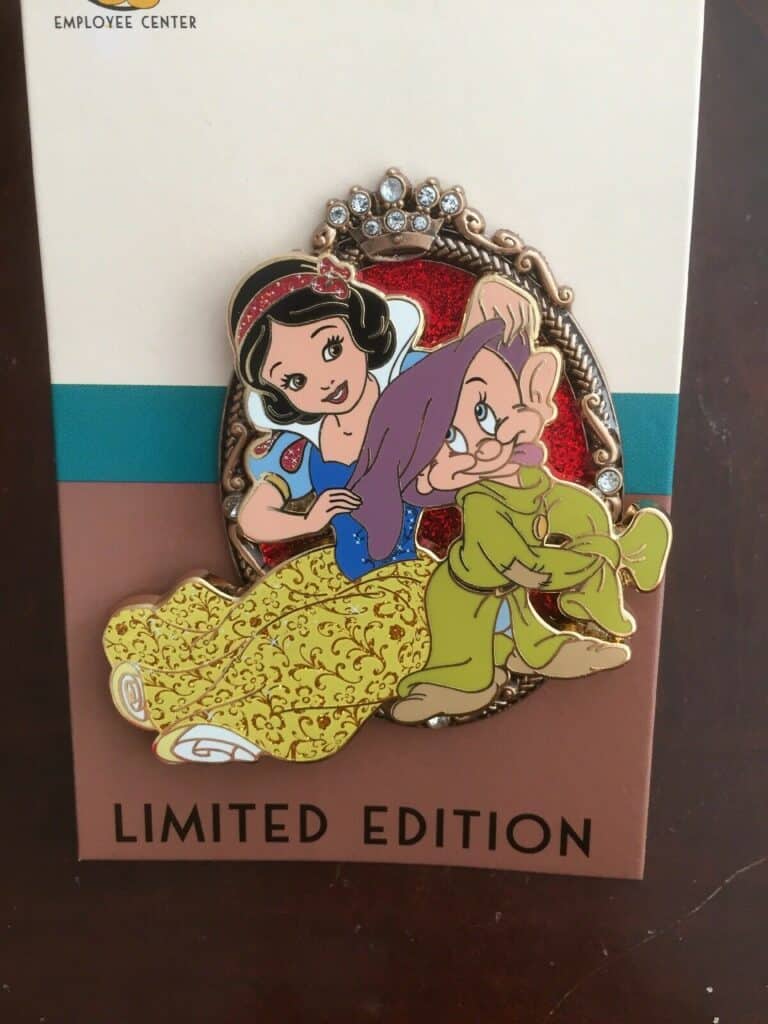 This limited edition 200 run pin featured Snow White and Dopey and was only available at Disney Employee Centers (DEC). Both DECs are in Burbank, California and only one of those is open to the public. As a result, this pin is quite rare, explaining its high price point. It was part of a larger Pals series that featured other Disney characters and their sidekicks.

Although she performed all the songs for Snow White, actress and singer Andrea Caselotti was not credited in the film. 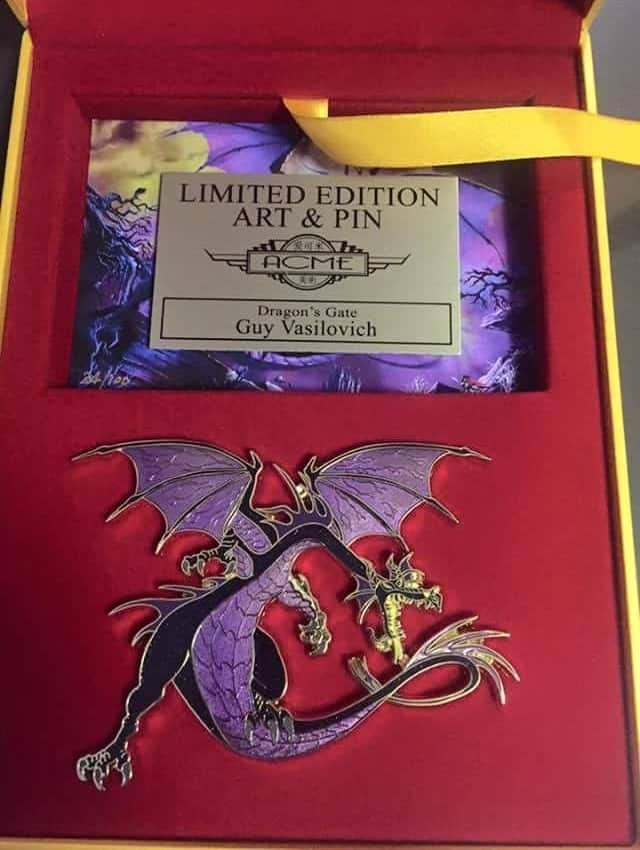 The Super Jumbo Maleficent Dragon Gate pin is a limited edition pin with only 100 copies ever produced as part of the 2015 ACME Studio Art Archives Series of Pins. It features the dragon version of Maleficent from “Sleeping Beauty” in mid-attack. It was only available at Hong Kong Disney, where it originally sold for $125 US dollars. As a rare, limited edition pin with a one country run, the Maleficent Dragon Gate’s current $995 price will only increase.

“Sleeping Beauty” bombed at the box office, leading the Disney Company to move away from princess films. The next one they released was “The Little Mermaid” 30 years later. 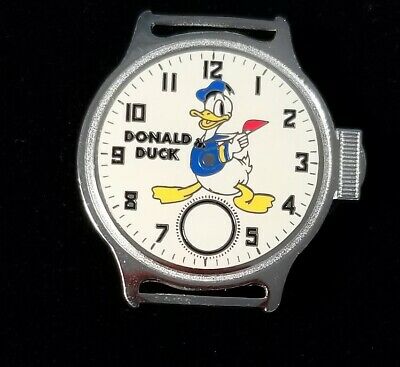 Disney only produced 100 copies of this Donald Duck watch replica pin for the now defunct Disney Auctions site. Donald Duck stands in the middle of the watch, smiling at the viewer and using his arms to determine the time. Some collectors have noted that the watch face only has one hand. There is an empty circle toward the bottom where the second one should go. This could be a production error, which would make this pin even more valuable and special. 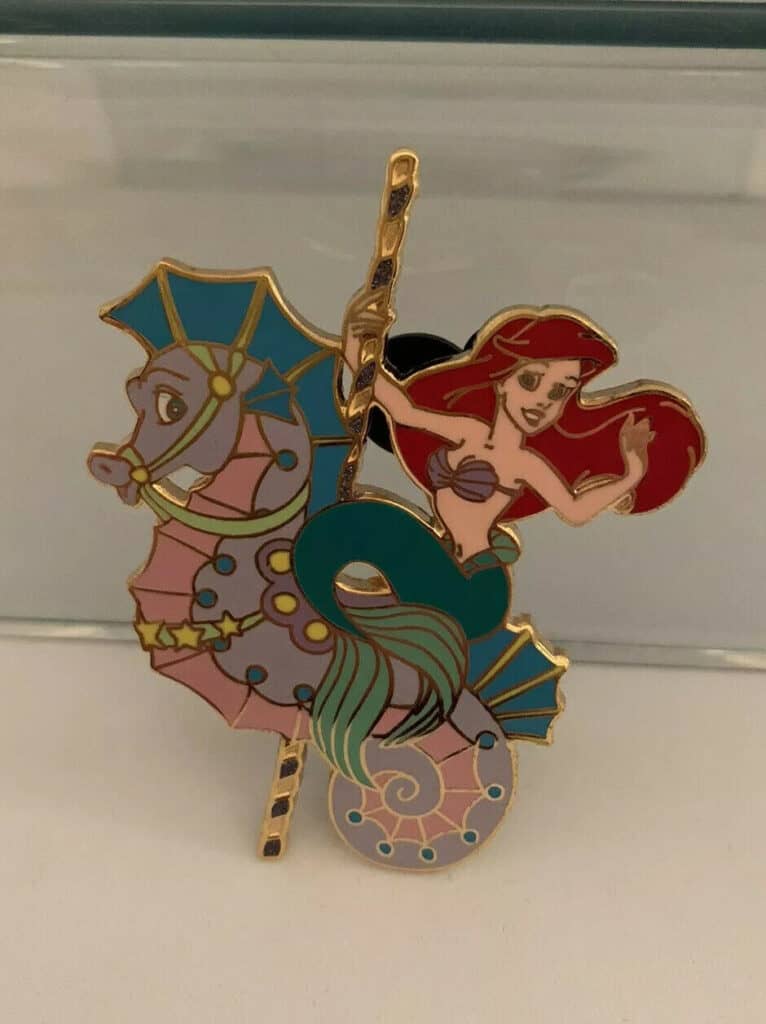 While this might seem similar to the 2018 Ariel carousel collection run, this 2003 edition of the pin costs thousands more dollars. It was produced exclusively for Disney Auctions, a now defunct entity, for a limited 100 copy run. A quick Google search proves that it’s difficult to find online, and therefore, even more coveted by collectors. Like the 2018 pin, it features Ariel riding a seahorse, although it’s purple and pink rather than yellow.

The beloved song “Part of Your World” was almost cut from “The Little Mermaid.” 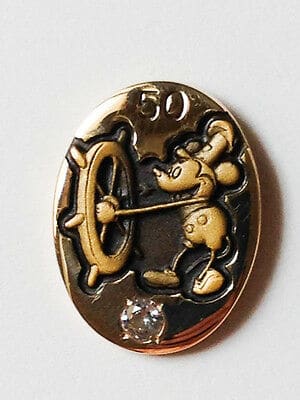 The 50 Year Service Award is rare because it is only available to Disney cast members who have worked at the park for 50 years. Few people make it that long at any job, especially one that requires standing for long hours at a populated theme park. In addition to the pin, the cast members also attend a gala where they’re given a statuette award thanking them for their service. The pin references “Steamboat Willie,” the first successful Disney film to feature the now universally recognizable Mickey Mouse, as a way to celebrate the Disney Legacy. The pin also features a real diamond at the bottom.

Chef Oscar Martinez had the longest career of any Disney Parks employee. He retired from Disney Resort in 2017 after 60 years. 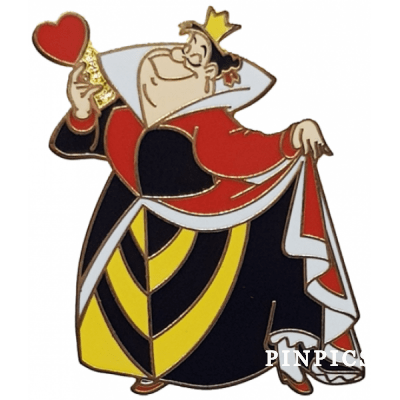 Only 10 of these pre production versions of the Red Queen pin exist. As prototypes, they have never been officially sold in a Disney Park and were only available at PinCon World in Las Vegas in 2019. The pin was intended as a mockup for a limited edition 200 pin at Hong Kong Disney. The pin itself is fairly straightforward. It features the Red Queen, the main antagonist from “Alice in Wonderland,” fanning herself with a heart.

PinCon World has its own exclusive pin available to attendees. Although, it probably isn’t tradeable at the Disney Parks. 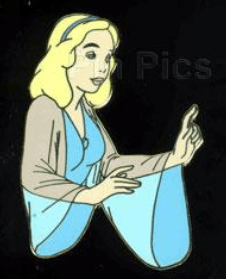 This Blue Fairy pin is part of a larger limited edition set from 2003 that celebrated Disney’s magical beings from over the years. In “Pinocchio,” the Blue Fairy grants Pinocchio’s wish and transforms him from a puppet into a real boy at the film’s conclusion. Walt Disney World only produced 10 of these pins and charged $500 per set. Due to its age and limited edition status, the Blue Fairy pin is difficult to locate online. If you have one, it would probably score a hefty price.

“Pinocchio” is based off of a story from 1881 by Italian author Carlo Collodi. 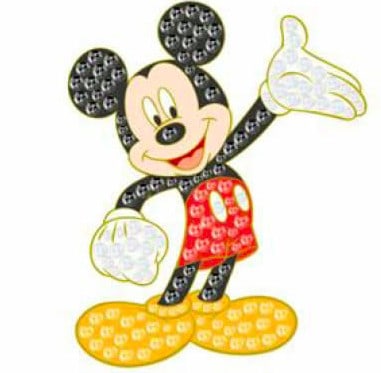 With a limited edition run of a measly three pins and an original price of $1,295, the Dream Jeweled Mickey pin is one of the rarest Disney pins ever made and a collector’s dream item. The high price is a result of the pin’s decorative features, which include 130 precious jewels like black sapphire, diamond, garnet and citrine. There are currently no online sales or auctions for this pin, but, if any do come up, it will most likely sell for thousands more than its original price point.

Disney provides starter kits for new pin enthusiasts. These usually include a lanyard and two to three pins.

10 Rarest Cursed Images on the Internet