9 Rarest and Most Expensive Chess Sets

For 1,500 years, chess has been a testing ground for budding strategists to test their mettle against friends and enemies alike. At every game store, you can buy the simplest plastic chessboard and have the same potential power for mastery as the most luxurious, jewel-encrusted sets in the world.

These are the sets that fetch insane prices due to their craftsmanship and materials, the rarest of the rare. The truly ancient chess sets are preserved in museums dedicated to thousands of years of history. Therefore, the ones with prices are the ones made by the artisans of the last century or so, whose passion for the game is so great that they wanted to create sets that almost no one earth can buy. 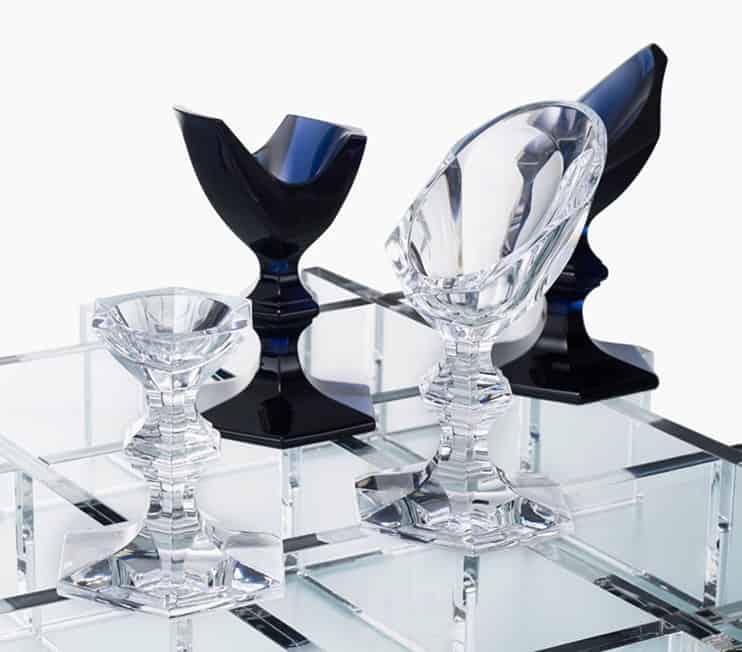 Baccarat, the French crystal maker, has been around since 1764. Naturally, a 250th anniversary called for something special, which is why they collaborated with Japanese Designer Oki Sato to create this set. The pieces are crafted from clear and midnight-blue crystal. Each piece takes over 100 man-hours of meticulous crystal cutting to complete.

These gorgeous limited-edition boards were only produced 50 times, making the 250th-anniversary crystal chess set one of the rarest in the world, valued at $32,000.

Baccarat crafted the entire private collection of tableware and palace decorations for the queen of Portugal in the late 1800s. This commemorative chess set carries a royal lineage to the modern-day. 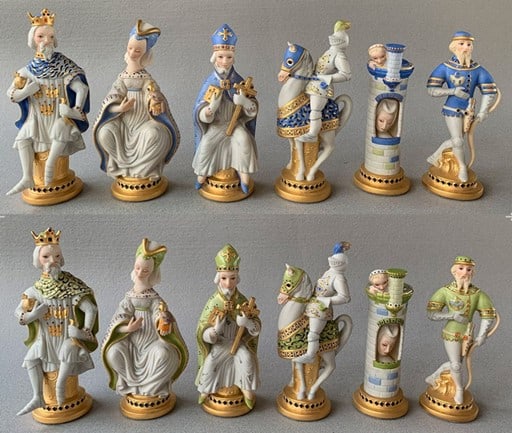 The Cybis Chessmen are a ten-of-a-kind porcelain set made in 1970. They were designed by the artist Harry Burger Jr. of Trenton, New Jersey. The elaborate pieces are based on the Nine Heroes Tapestries of the 14th century, depicting the courts and battles of the poems of Jacques de Longuyon circa 1310.

The heroes on the board depict Hebrew, Jewish, and pagan figures from Joshua and David to Arthur and Charlemagne to Alexander and Julius Caesar. Only 10 originals of this set exist, which is why it fetches nearly $50,000 when one appears on the market.

The original Cybis Chessmen set was presented as a gift to the then-USSR from President Richard Nixon. This set and the 9 others commissioned at the time represent the entire supply of this rare board. 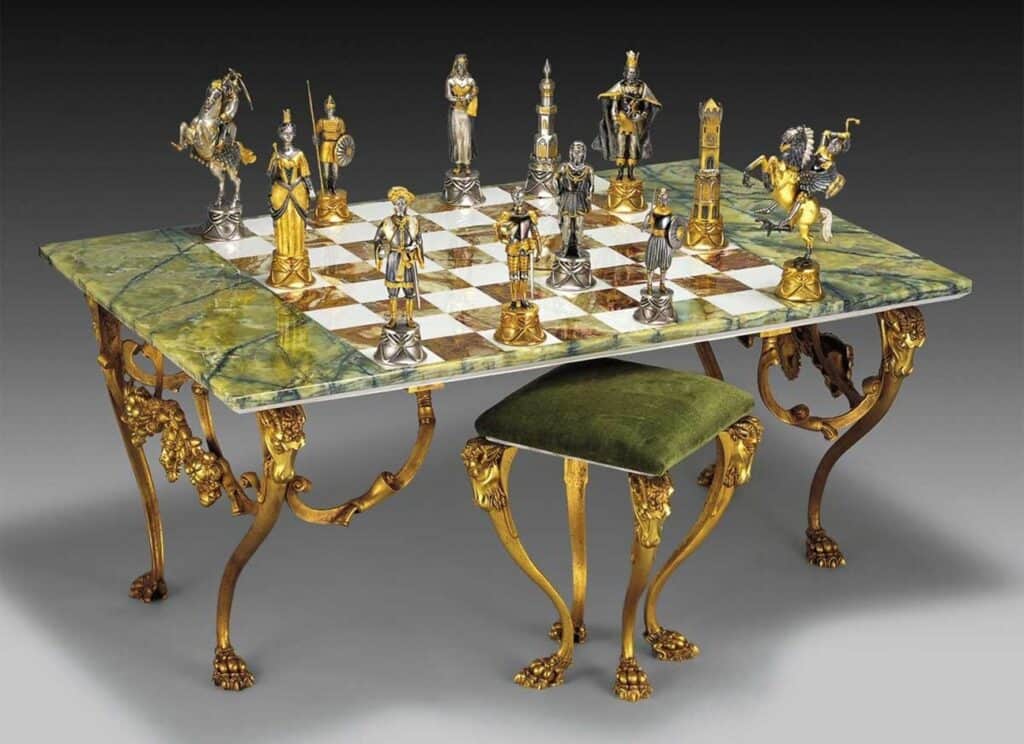 This chess set designed by the Italian craftsman Piero Benzoni and sold by Pianki is a depiction of medieval warfare, featuring classic knights, turrets, and an Arthurian-inspired court of royals based on the historical accounts of Charlemagne. The board is crafted on gold-plated legs that mirror the decorative molding of the era.

Each part of this set has been crafted from solid bronze and coated in 24-karat gold and silver plating. The board is solid onyx embedded with additional plates of gold. To bring the classic miniature Italian tilework into your home will set you back $146,490.

Piero Benzoni went into the art-craft of metalworking at the age of 14 before becoming known as one of the premier silver craftsmen and jewel sculptors in the world. 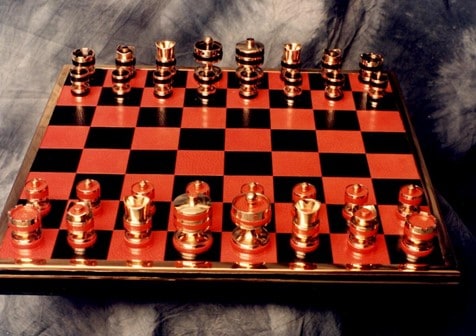 The luxury games designer Geoffrey Parker made two limited edition sets in 1977. One was gifted to celebrate 25 years of Queen Elizabeth’s reign. The other was created to sell.

This set, valued at $195,000 is a two-of-a-kind board, but a one-of-a-kind buy. The sterling silver and gold leaf pieces are identical to the one gifted to royalty all those decades ago. The board, made with leather buffalo calfskin trim, earns its spot through exclusivity and sheer historical value.

This board was featured at the Spassky v Fischer World Championship chess match in 1972, arguably the most famous match in history. 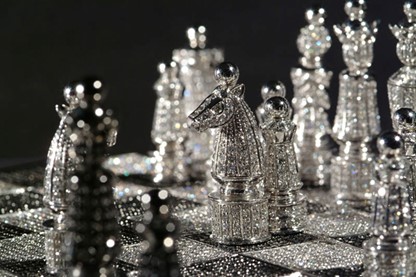 The French jewelry artist Bernard Maquin made the Royal Diamond Set in 2005. Since then, it has become a legendary luxury. These handmade pieces in total utilize almost 1,200 grams of 14-karat white gold. In addition to this, 9,900 white and black diamonds encrust its pieces in a blanket of sparkling royalty.

This high-end, unique board was made practically to be the most expensive in the world and might have been at one time. Yet, there are still three sets that put the Frenchman to shame, even though no one would ever be ashamed for playing on this decadent board.

Maquin, along with thirty skilled craftsmen, spent over 4,500 hours handcrafting these pieces. When you put it that way, this chess set only costs about $111 per hour in labor. That’s not so bad, right? 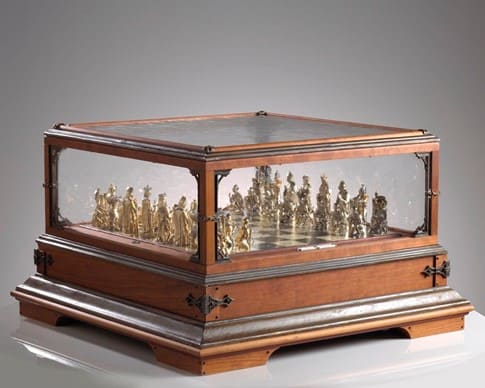 The designer Jim Grahl crafted one of the most luxurious chess sets in the world when he made this one for the Cole family. The design meticulously recreates 14th-century Europe in the costumes, ornamentation, and architecture. Like the rarest sets in the world, Grahl crafted each piece from 14-karat gold using the lost wax method, which permits the most extraordinary detail, provided the artist has the time and skill to spare.

The board is made from ebony and cherry wood and embossed with sterling silver inlays. The case is handmade as well. The original Grahl set has been valued at upwards of $700,000, making it one of the most expensive in the world. A set of 11 replicas was also made, valued at around $450,000.

The lost wax method that Grahl used to make these pieces is nearly as old as humanity, with the earliest example cropping up 6,000 years ago in the Indus Valley. It is still valued as the superior crafting technique to quicker and easier methods like piece-molding. 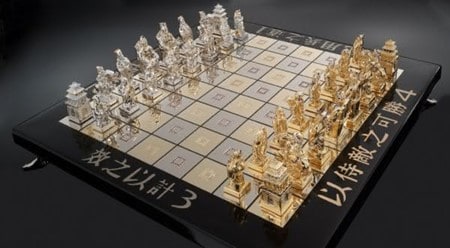 This one is one-of-a-kind. Mimicking the period aesthetic of The Art of War, the famous strategist’s war manifesto, this chess set’s blindingly solid gold construction should immediately catch your eye. You know you’re looking at something special.

Each rhodium and gold piece is handmade and inlaid with stunning rubies, emeralds, diamonds, and sapphires. Even the board is incredible, built from ebony wood and gold, and emblazoned with more jewels. Sun Tzu probably wasn’t thinking of anything so glamorous when he wrote The Art of War. This is warfare at its fanciest.

The price of this unique board is only a guess. The one time this incredible piece was auctioned, the designer Victor F. Scharstein turned down the highest bid, which was over $700,000. We can only guess how much it would cost to finally separate him from his masterwork. 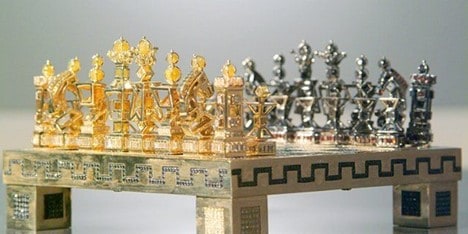 This one is a little strange. When first announced by the luxury jewelry designer, Boodles, the Jewel Royale Chess Set was rumored to cost nearly $10 million. The king piece alone was going to be over $140,000. However, this set was never made.

While this version of the board was significantly exaggerated, the real thing still sports inlays of 16-karat gold, spirals of diamonds, and dozens of rubies. The real sets can be commissioned for $1.2 million. Not exactly affordable, but a far cry from the initial asking price.

The initial value of this set was so misreported that websites to this day still list this as the most expensive set in the world at $9.8 million. However, if they dug a little deeper, they would discover that no such set was ever made.

Now, we’ve reached the unattainable. The cream of the crop. The rarest and most expensive chess set is The Pearl Royale Chess Set. The Australian goldsmith Colin Burn made this incredible set using only the most luxurious materials. The pieces are all sculpted from 18-karat white gold. They are inlaid with an incredible blanket of diamonds, sapphires, and pearls, straight from the South Sea. In total, the precious stones on this set amount to 500 carats.

There is only one artist’s proof of this unique board, along with 3 limited edition copies. The jewels (and reputation) of this $4 million piece of limited art have made this excessive yet dazzling set rise to the top of collector’s attentions as the most expensive chess set on earth.

The Pearl Royale set has only been to exhibition once, in 2019 in Beverly Hills. If you weren’t at that art gallery at that time, and you’re not Colin Burn, you’ve likely never seen this incredible set (and probably never will).

The rarest and most expensive chess sets in the world can fetch millions of dollars from the most ardent collectors. The beauty of the game though is that even the cheapest board can deliver the same incredible experience. Thousands of years of strategy will be at your fingertips, even if diamonds may not be.

8 Most Expensive and Exclusive Hotel Suites in Las Vegas