Battle Cats or Nyanko Daisensou (“Nyanko Great War”) as it’s known in Japan is a free-to-play tower defense game. It was released by PONOS Corporation in 2014 for mobile devices and has been ported to several Japanese consoles such as the Nintendo 3DS and Switch. The very first version appeared on the iOS store in 2011 but it was a more rudimentary version called “Battle Nekos.”

We’ll be talking about the improved 2014 version, which is the only one available now. As you send your cats out onto the 2D playing field from your cat base and cannon, you may be wondering if some cats are rarer than others. In fact, some have attained the coveted status of “uber rare cat” and are almost unattainable.

Here are the 8 rarest cats in the Battle Cats game. 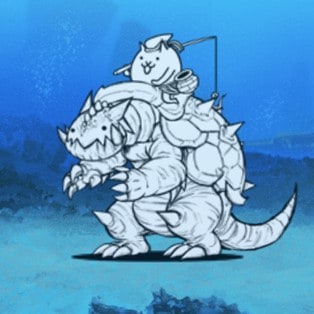 Urashima Taro is an uber rare cat. He can be unlocked by joining the Ancient Heroes Ultra Souls event and playing the Rare Cat Capsule. He’s most coveted for his numerous buffs, which include slow, resist freeze, and attack and defense buffs. In addition, he evolves into both Guardian Gamereon and King Gamereon, making him an even more strategically rare addition to your party.

His health and attack buffs drive his utility in normal play. Strategists recommend keeping him alive as long as possible to keep his valuable buffs alive.

Urashima Taro was given his True Form (King Gamereon) in the game’s 6.0 version update. This form has even more health, attack, range, and immunities. 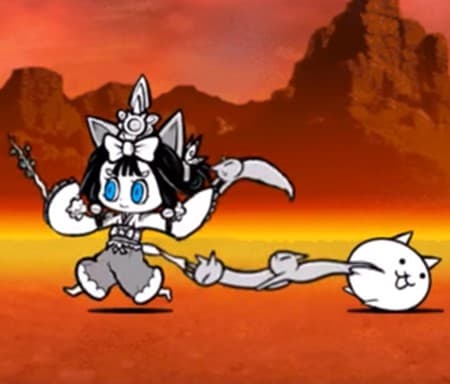 Miko Mitama is a major crowd controller uber rare supercat that users hope to evolve into Mitama the Oracle: one of the best ubers in the game. But we’re getting ahead of ourselves.

Miko Mitama was added in version 5.8.0 and is known for drastically changing stats between forms. She could be unlocked by playing the Rare Cat Capsule at the Superfest or Uberfest events.

Her main traits include a fast attack rate, a host of immunities, resistance to traited enemies, and a great ranged attack. She has an expensive cost and long recharge time when evolved, however. Her incredible versatility makes her one of the rarest cats in the game.

The evolved form, Mitama the Oracle, is a showstopping uber. With her long-distance attacks and resistance effects under your belt, you can take on the entire Stories of Legend basically with no issues. 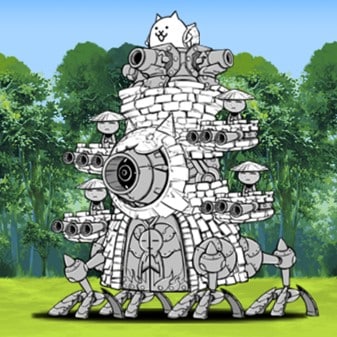 Kasa Jizo, or just “Jizo,” has been wreaking havoc since being introduced. His main skills include low cost, high DPS, and attack benefits including useful multi-hit attacks. He was obtained through playing a Rare Cat Capsule in the Ancient Heroes Ultra Souls event.

Jizo’s short cooldown makes him a choice attacker for players that like to stack their cats, especially against Angel and Black enemies. Any Black-dominant stages like Soap Scum and Decay would be great choices for putting this uber rare cat to work.

In version 7.4, Jizo was also given a true form. However, this form, Jizo’s Mega-Castle, is not particularly desirable compared to his evolved form.

Jizo’s evolved form is a moving castle that works great against bosses, especially those that like to stack Angel or Black enemies. Jizo’s Moving Castle is the perfect choice to take on Manic Eraser or Crazed Tank. 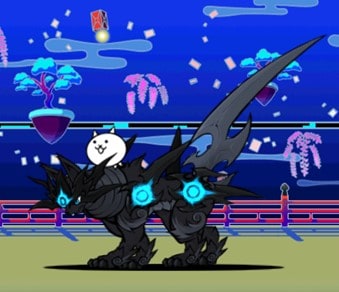 Shadow Gao lives up to its imposing appearance. If you can manage to nab this uber rare cat from the Epicfest or Superfest event, he rewards you with incredible damage, an immunity to waves and knockback, and a fast attack rate. The only downside is the expensive cost and lengthy recharge time.

Diabolic Gao is known as one of the most useful generalists in the game. An ability to deal incredible damage to traitless enemies is not a common trait in itself. It makes Shadow Gao such a desirable addition to your arsenal. His DPS is also 6.2k, which is incredible.

With his advantage against traitless enemies, Shadow Gao can make short work of Crazed and Maniac stages, as well as Awakening stages for Special Cats. Floor 30 and Heavenly Tower, which are normally trouble spots, are a walk in the park with Shadow Gao in your army. 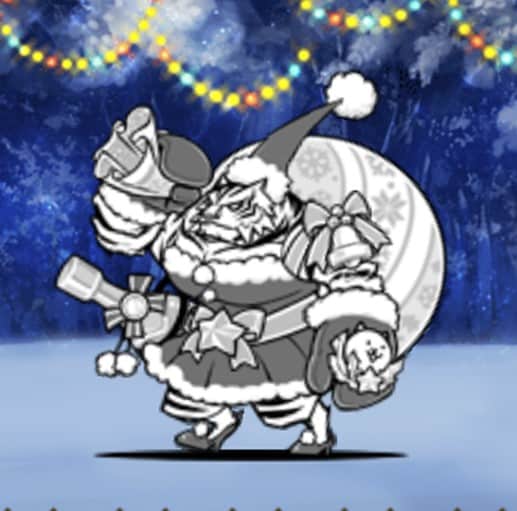 Using a Rare Cat Capsule at the Xmas Gals Gacha Event could nab you this huge, lovable walking cat Santa. Some people evolve him into Maeda Christmas while others just enjoy him for the tanky powerhouse he is.

At 40% health, Keiji Claus doubles in attack power. He also has an incredible resistance to Red enemies and an immunity to waves. His cheap cost, fast attack rate, and short recharge time make him a near-unstoppable powerhouse in the right level.

Keiji Claus can be a tank or a midranger and generalist. However, it doesn’t have a true form like Immortal Keiji, relying instead on its low-health attack buff to compensate against its main competition, which is Talented Ultimate Bondage Cat. 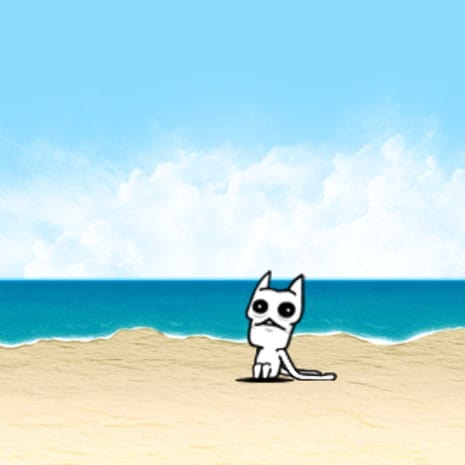 This uber rare cat could be acquired at several events, but still remains one of the rarest and most powerful cats in the game. Tales of the Nekoluga featured Tecoluga, who is useless in his normal form. He has to be evolved first.

In his true form, Tecoluga has a +20% critical hit chance along with his default high attack power, DPS, and range. Once evolved into Tesalan Pasalan, this cat is one of the biggest power-hitters in the game. Metal Cyclone falls like a chump.

Tecoluga can only target one unit at a time, which balances out his incredible attack power. This means he is also a difficult unit to use against a boss with a lot of familiars. While he can scrap a single rough enemy, lingering Shockwave units or other peons can drag him down. 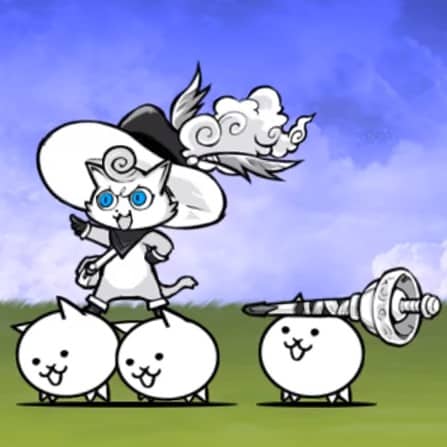 This uber rare cat based on the famous fourth musketeer could be acquired through Uberfest or Superfest. As an exclusive unit, this cat transforms radically between forms, with Meow-skeeter losing and gaining a lot of abilities.

On his own, D’artanyan deals a ton of damage to traited enemies, moves fast, and knocks enemies back easily. When evolved, he becomes immune to warp and wave attacks. By turning from a fighter into a rusher & sniper, this cat is one of the rarest you can get.

D’artanyan is a beast against not only traitless enemies but Metal units as well. However, unless the enemy force is crowded with those units, the evolved Meow-skeeter is probably the more powerful choice. He’s a particularly great counter for Tackey. 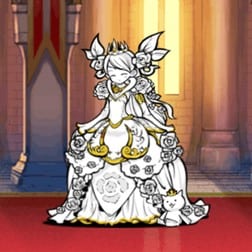 The rarest cat in Battle Cats is Radiant Aphrodite. Available by releasing Rare Cat Capsules in The Almighties: The Majestic Zeus event, Radiant Aphrodite looks and plays incredible. She deals incredible damage to Alien enemies, which makes her perfect for levels like Master A. and THE SLOTH. She also has a ridiculously long-ranged attack that can make sniping enemy bases on levels like Vulcanizer and Absolute Defence a snap.

In fact, she’s one of the best snipers in the game, which contributes to her rarity. In version 9.1, she even got a true form called Almighty Aphrodite. She’s one of the most coveted battle cats for a reason.

Aphrodite is a great unit before adding talents and the best players recommend not even bothering. Adding talents to her actually stalls the enemy backliners, allowing them to hide, which will wreak havoc on your weaker infantry. In the process, she can lose her advantage against Aliens. So get the EXP in her but save the NP for the units that need it.

Battle Cats releases a lot of events that show off the different forms and abilities of their new units. This means that many of the super powerful cats become incredibly rare due to how useful they are in the more difficult parts of the game. These are the 8 rarest battle cats you can find.