This list contains some of the rarest biomes in the Overworld. With the exception of the top four rarest biomes, the rest of the biomes on this list were arranged in alphabetical order as there isn’t official numerical data regarding how often these biomes generate. However, some avid Minecraft players, like Reddit user u/Ecl1psed or Data Dude on YouTube, have tried to run their own tests to see how often different biomes spawn. Swamp Hills are the rare variant of the Swamp biome and has hillier terrain than the regular Swamp. The hills in the Swamp Hills tend to be much smaller/shorter than in other hill biomes. Also, flooded areas in the Swamp Hills have lower depths than the rest of the Swamp and are sometimes deep enough to have a Gravel floor in place of a Dirt floor, like normal Oceans. If a Swamp Hill is next to a Jungle, there is a chance that a Modified Jungle Edge can generate, which is the rarest biome.

In Java Edition, Swamp Huts do not generate in Swamp Hills like they do in the regular Swamp biome. Ice Spikes are a rare variation of the Snowy Tundra biome and feature large spikes of Packed Ice and glaciers. Before the Update Aquatic, Ice Spikes were the only biome where Packed Ice could be found. The Ice Spikes come in two different sizes: short, wide spikes; and tall, thin spikes. Usually, the spikes are 10 to 20 blocks tall, but the taller, thinner spikes can reach over 50 blocks in height.

Like the regular Snowy Tundra, the only animal mobs that spawn in the Ice Spikes are polar bears and rabbits. Players should be careful when digging underground in Gravelly Mountains because the top layers of Gravel can cause suffocation.

The difference between the regular and hills Giant Tree Taiga Biomes and the Giant Spruce Taiga biomes is that the Spruce trees in the Giant Spruce biomes have more leaves. Since there are more leaves, the chances of saplings dropping when these trees are cut down are increased, which makes it a sustainable place to harvest Spruce wood.

Although the Giant Tree Taiga and its variants are cold biomes, it rarely snows naturally in these areas because the snowfall line is so high up at above Y=150 (blocks high); in the Giant Spruce Taiga, the snowfall forms at Y=120. Eroded Badlands are another rare variation of the Badlands. This biome unique formations of tall thin spires of terracotta that rise out of the floor of the canyon. Deserts do not generate alongside of Eroded Badlands biomes. In Bedrock Edition, passive mobs – Pigs, Sheep, Chickens, Cows, and Bats – spawn in the Eroded Badlands.

The terracotta formations in the Eroded Badlands are called hoodoos and the biome is modeled after Bryce Canyon in Utah, USA, which also features beautiful hoodoos. 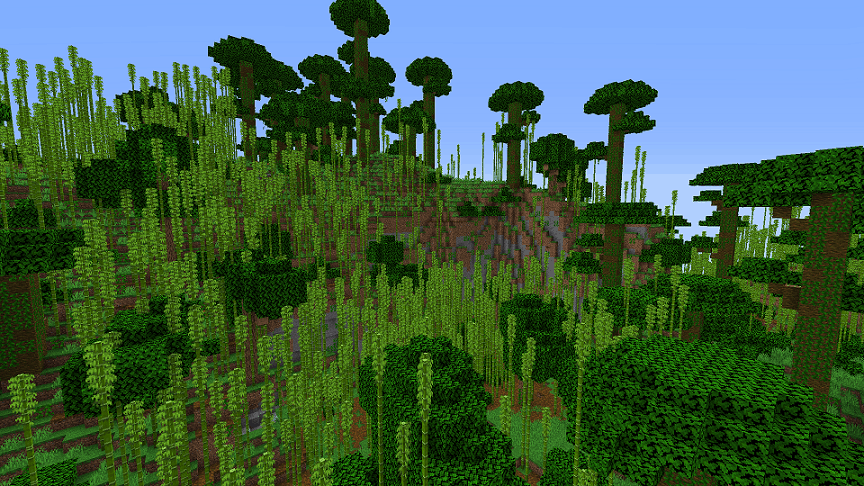 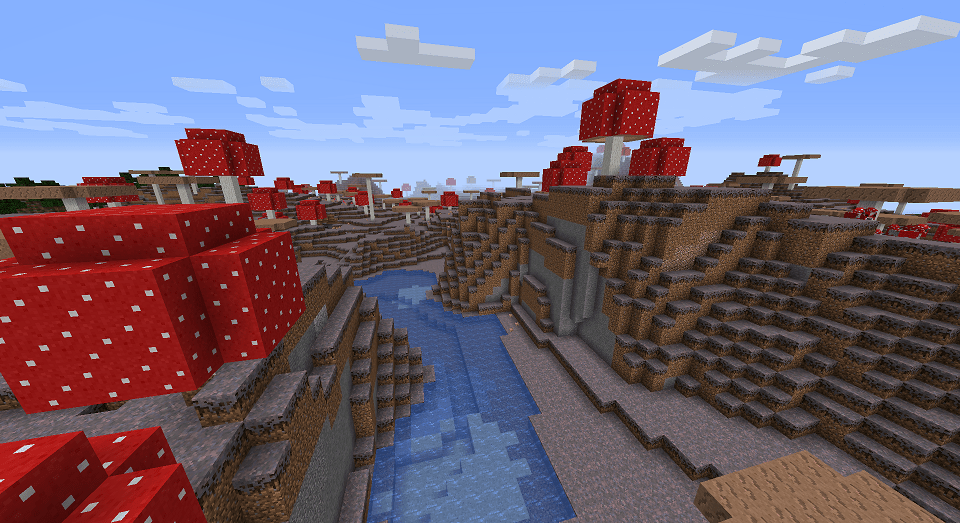 
Mushroom Fields are the rarest non-variant biome in the game. Typically Mushroom biomes generate as an island surrounded by the ocean, but they sometimes appear touching land on one side. On incredibly rare occasions, Mushroom Fields can be completely landlocked, but this is even rarer than the Modified Jungle Edge. Mushroom Fields are the only biome where Mooshrooms (mushroom-covered cows) spawn naturally.

Mushroom Fields are one of the safest biomes because the usual night-time hostile mobs (creepers, skeletons, zombies, etc.) do not spawn here even in caves, mineshafts, and other dark structures. Unlike the regular Snowy Taiga variant, igloos, villages, and outposts do not spawn in the Snowy Taiga Mountains biome. The look and layout of the Modified Badlands Plateau mimics large plateaus in the real world that have weathered more over time. 
Modified Jungle Edge is currently the rarest biome in Minecraft and the only one with the “extremely rare” label. This biome is so rare because it will only generate under very strict conditions. In order for a Modified Jungle Edge to appear, a Swamp Hills biome – which is also fairly rare – must spawn right outside the edge of a Jungle. Modified jungle edges cover only a few millionths (0.00027%) of the overworld by area.

Since Modified Jungle Edges are so rare, they are typically very small at only a few hundred blocks in length and in some cases fewer than 10 blocks.