What Is the 1945 Lincoln Wheat Penny Made Of?

The Lincoln cent, also known as the Lincoln penny, has a face value of $0.01. The production of this coin began in 1909. The U.S. Mint has struck the Lincoln Penny for over a century and has produced the penny for circulation to this day. In 1945 alone, the Mint made almost 1.5 billion Lincoln Penny.

The 1945 Lincoln Wheat Penny composition is 95 percent copper and 5 percent tin and zinc. The same composition was used for the pennies from 1909 to 1942 and from 1944 to 1982. The U.S. Mint used zinc-plated steel materials for the Lincoln cents produced in 1943, as there were shortages of copper during the war.

Meantime, beginning in 1982 till the present, the Mint used the 97.5 percent zinc and 2.5 percent copper combination for all the Lincoln pennies. 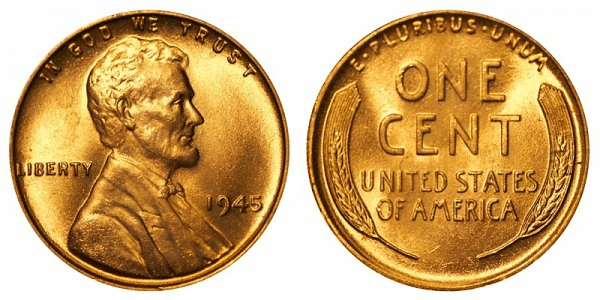 As for the 1945 Lincoln cent design, it’s interesting to know its story. At first, the coin’s design was a flying eagle created by sculptor Augustus Saint-Gaudens, but later on, then-president Theodore Roosevelt learned that by law, an eagle could not appear on the coin. So the coin was decided to be redesigned.

But unfortunately, Saint-Gaudens became very ill and died without finishing the obverse design. So the inception of having Lincoln on the one-cent in 1909 happened when Roosevelt thought of honoring his fellow Republicans, as also was proposed by many citizens to the Treasury Department.

In January 1909, the sculptor Victor David Brenner was commissioned for the coinage redesign to have Lincoln’s profile on the cent. This decision was also because the commemoration of his centennial birth anniversary was also in that same year, as he was born on February 12, 1809.

On the obverse (face) of the 1953 Wheat Penny, you can see the bust of the assassinated 16th U.S. President Abraham Lincoln facing right. You can also find the following inscriptions on this side:

On the reverse (tail), Brenner designed two ears of wheat placed on the left and right sides of the coin. You can read the following inscriptions as well:

Brenner depicted two stalks of durum wheat in the cent in 1945. This has made the Lincoln cents known as ‘wheat pen,’es’, mainly the coins struck between 1909 and 1958. In 1959, Brenner’s wheat was replaced with the Lincoln Memorial, designed by Frank Gasparro.

The 1945 Lincoln Wheat Penny was struck at three Mints in the U.S. in Philadelphia, Denver, and San Francisco. There are three varieties that the 1945 Lincoln Wheat cent is known for, the 1945-D, 1945P, and 1945-S. Apart from these, the mint also produced minted-error coins.

Nearly 1.5 billion 1945 Lincoln cents of the combined varieties were produced for release and circulation.

You can find the details of each variety below: 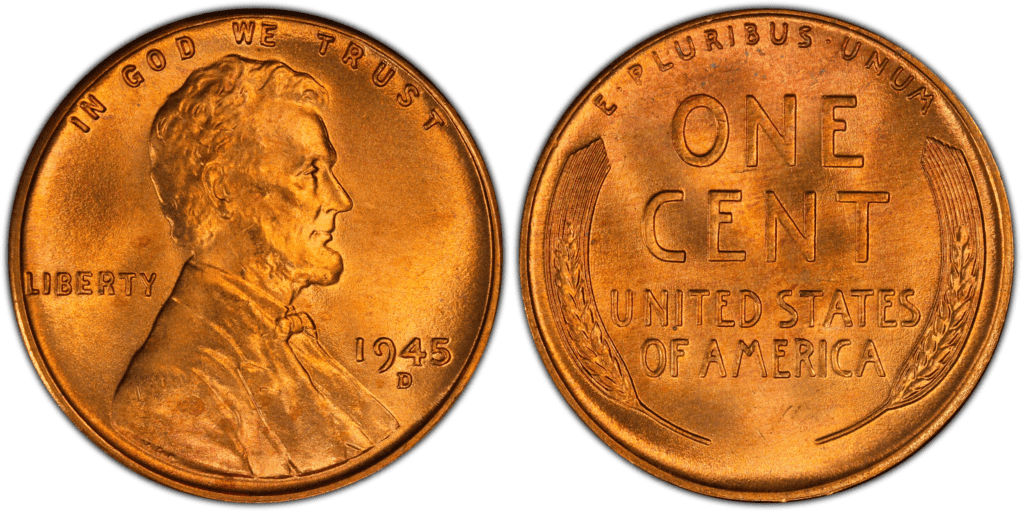 The 1945 Lincoln cents minted in Denver were abundant in rare kinds out of more than 266 million produced that year. Collectors mostly see that the coins have Extremely Fine grades. Most 1945 pennies are still lightly worn and in better condition. 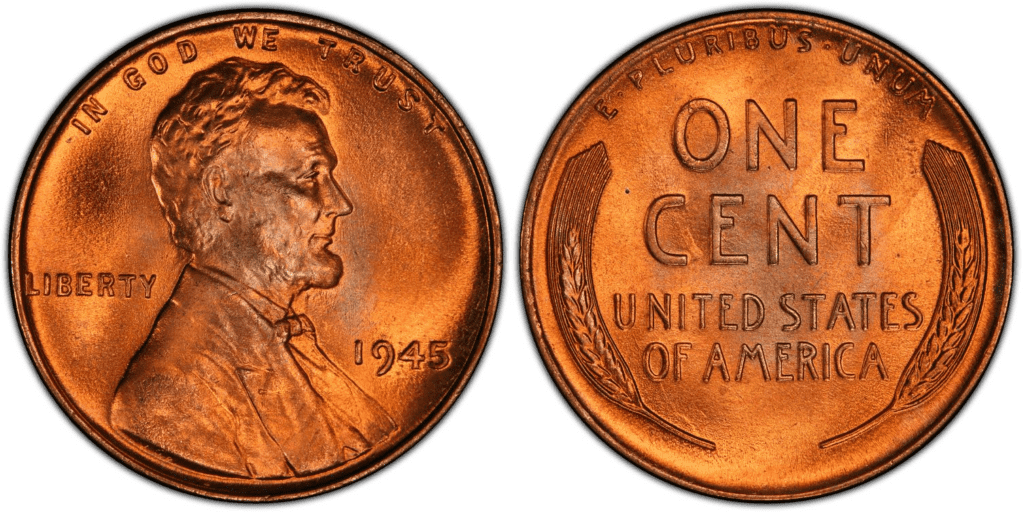 The MS66 condition or higher for the 1945 Lincoln penny series is hard to find nowadays. With very few samples now existing, 5% -10% of the number may have a good quality for MS66 1945-P. In the MS67 condition, there are only about 100 that are believed to be existing. 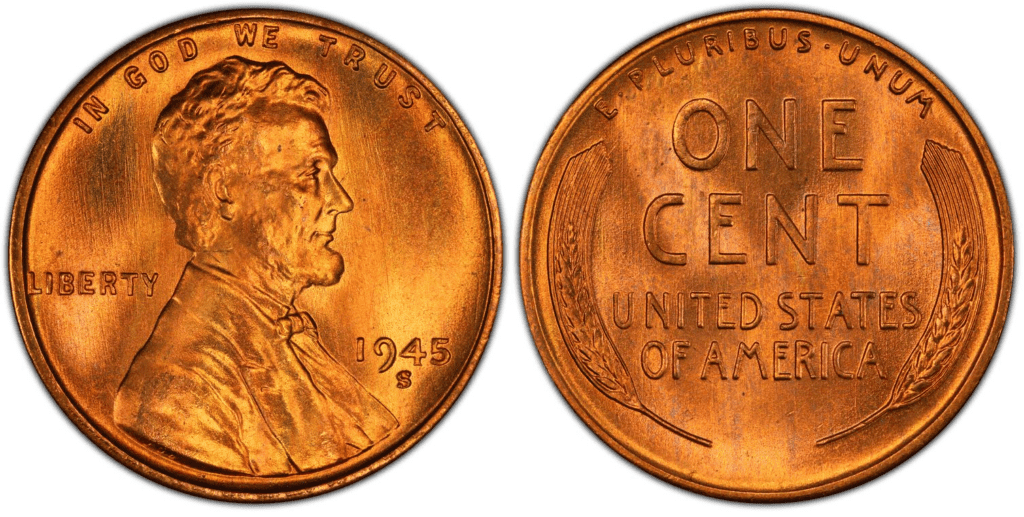 The mint in San Francisco produced less than 182 million coins. This is the fewest of the three varieties of 1945 Lincoln pennies. A few circulated-grade varieties of this coin also had a reasonably inexpensive premium.

In 1945, the U.S. Mint struck almost 1.5 billion Lincoln Wheat cents for circulation. Out of this massive production, the equipment used to make coins could have been overworked and deteriorated, which resulted in mint-made error coins.

These errors are primarily unintentional and sometimes are due to human errors. Nevertheless, these error coins show some uniqueness and rarity. Distinct and special coins like these are valuable to many collectors as these are premium ones when sold.

Coins struck with errors during the minting process are, at times, a result of the following:

A few samples of the 1945 error coins are listed below: 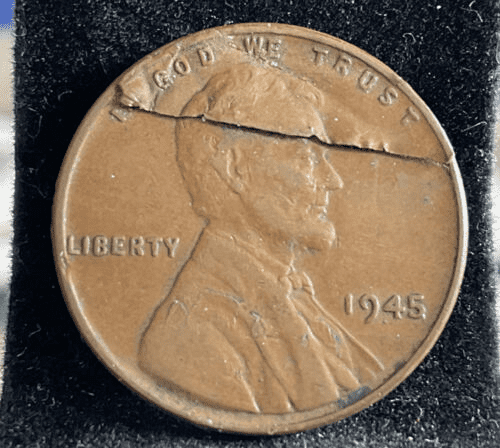 This 1945 Lincoln Wheat error coin is a result of a lamination flaw. This flaw is a planchet defect due to metal impurities and internal stresses. As a result, the coin will discolor, have an uneven surface, peel, and split. 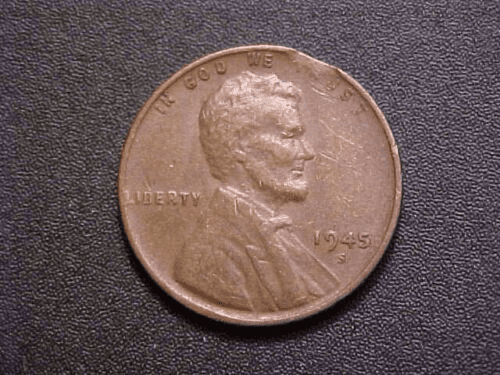 This sample of the 1945 S Lincoln Wheat penny results from a punch that overlapped the leading edge of the metal. Usually, a clipped planchet happens if there’s a misfeed of metal, and it punches strikes’ overlapping holes, leaving the previous strike to produce a curved slip. 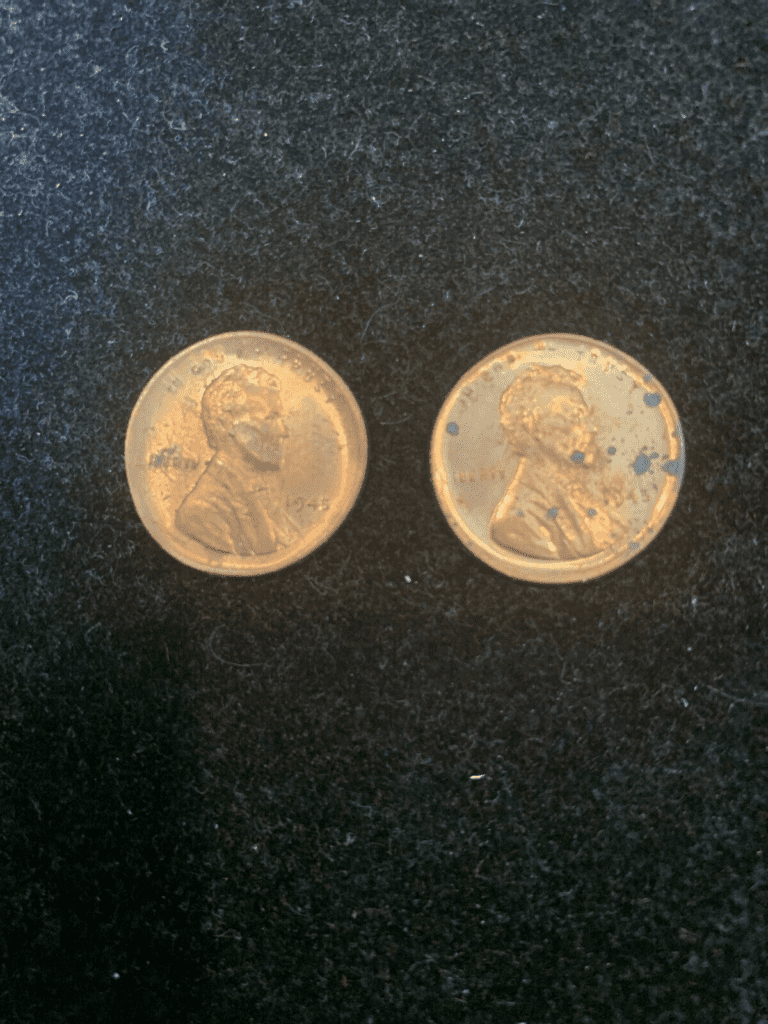 How Much Is The 1945 Lincoln Wheat Penny Worth Today?

Coin experts and numismatists put a value on most coins by determining their condition, grade, and rarity. The same way they value the 1945 Lincoln wheat penny. The cent’s melting value is generally based on the value of the metals it is made of: copper, tin, and zinc.

Though its face value is almost insignificant, the 1945 Lincoln Wheat cent is still desirable for most collectors. Since these coins are no longer produced, they are rare and have an inherently rising value. Let’s take a look at the table below to see how much it is worth based on its variety:

As you can see, the 1945 penny can be truly valuable. To know its full potential, take a look at these auction records for each variety:

Where To Buy Or Sell 1945 Lincoln Wheat Penny?

Well, this is not hard to resolve! When buying and selling your 1945 Lincoln Wheat penny, the best place to consider is online. The popular websites you can go to are eBay and Amazon. Some sellers are also offering the coins via Etsy.

If you’re into offline buying and selling, visit physical stores like antique stores and pawnshops. You can also buy and sell your 1945 collections at coin shops and auction houses.

Professionals from PCGS and NGC can also be your consultants if you need advice on how and where to go about buying or selling your 1945 wheat coins.

How do I know if my 1945 wheat penny is worth anything?

The overall condition of the coin can determine its worth. So having it professionally graded would help you know whether your 1945 wheat penny is worth a premium or not. Best to consult or bring your penny to professionals like the ones from PCGS or NGC.

There are only two mint marks you can find on a 1945 wheat penny, either a “D” (minted in Denver) or an “S” (minted in San Francisco). You can find these marks below the year of release on the obverse side of the coin.

Out of more than 1.4 billion 1945 wheat coins minted, unintentional error pieces were being produced. These errors are due to, but are not limited to, the following:

You can search on eBay, Etsy, and Amazon to find some error coins.