10 Rarest Turtles in the World

Turtles are one of the oldest surviving and adapting reptiles in the world, with the earliest findings from over 160 million years ago.

They have vertebrate shells, soft legs, and flexible necks that help them be aware of their surroundings, a sharp contrast to slow bodies and rigid spines.

There are around 360 living species of turtles, but many have been critically endangered for years.

Seven different species of sea turtle can be found in freshwater and oceans around the globe, but nearly all of them classify as endangered and vulnerable species.

Loss of habitat, hunting for meat and shells, and pollution are some of the biggest threats to turtle and their habitats. Experts from around the world are trying to prolong their population, but with not much luck.

This list covers just the tip of the iceberg of the rarest turtles in the world. 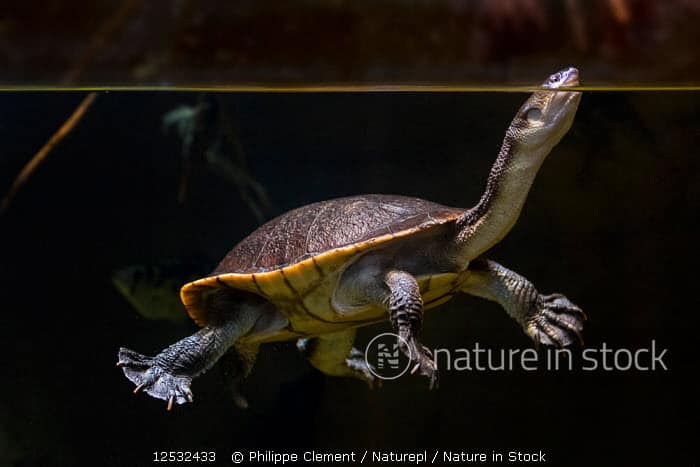 Roti Island turtle lives in freshwater and small lakes and can grow up to 10 inches in length.

This species was added to the IUCN Red List in 2018 due to its decreasing population. The turtle is one of the most desired turtles in the international trade, but the status of critically endangered species didn’t stop the illegal capture. The three remaining populations live in an area of only 27 square miles.

This Roti Island turtle is commonly known as McCord’s snakeneck turtle in honor of Dr. William Patrick McCord, a turtle expert veterinarian from New York. McCord used to work on preserving their habitats. 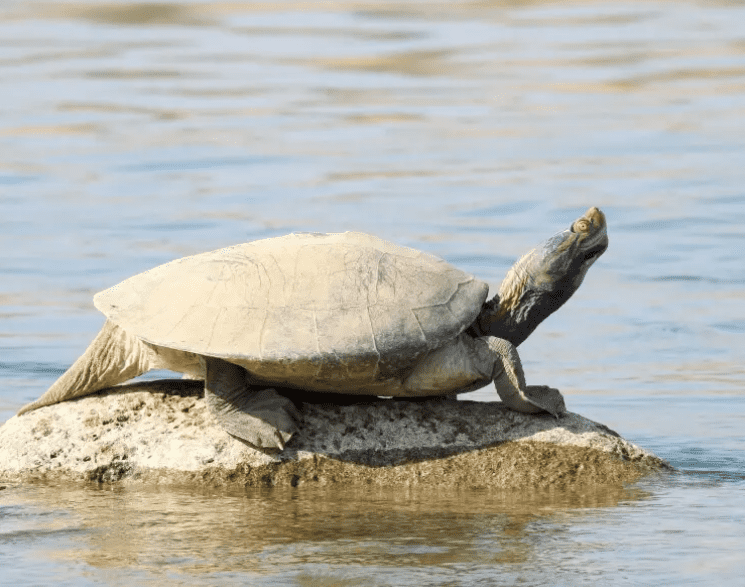 Red-Crowned Roofed Turtle is one of 24 endemic species of turtles in India, distinguished by its bright red, yellow or blue facial features. Historically, the species used to be native to Bangladesh as well, but it’s possibly extinct there. Males are smaller than females, who can grow up to 22 inches.

The bright red and yellow on the turtle’s head is common only in males during the season of breeding.

The population decline present in the last couple of years added this turtle to the IUCN Red List of Threatened Species in 2018. They are considered the most threatened turtles in India.

The most common turtle species of India is the Indian Black turtle, a medium-sized freshwater turtle found in South Asia. It has dark brown to a reddish shell, with a yellow or orange face. This turtle can grow up to 18 inches and loves basking in the sun during the morning. 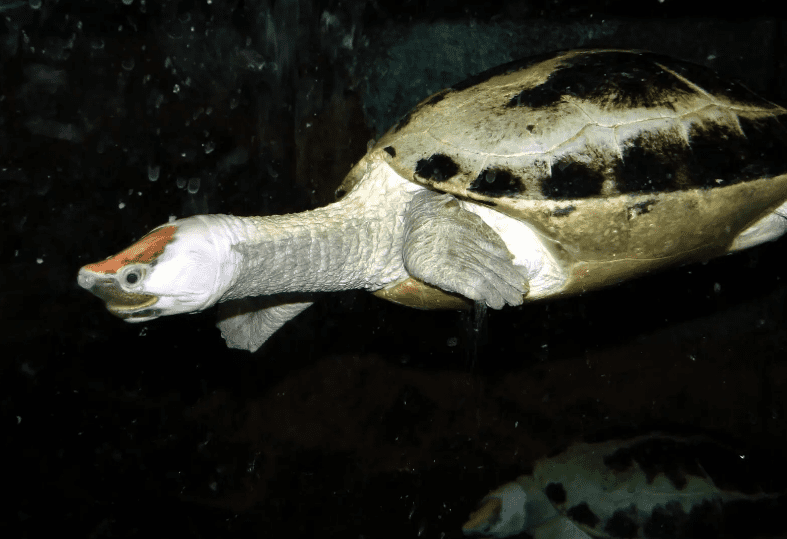 Like Red-Crowned turtles, Painted Terrapin get their colorful heads during breeding seasons. Since males are smaller than female turtles, they tend to acquire a vivid red stripe on their heads to attract mates. Painted Terrapins are native to Southeast Asia, especially in freshwater and rain forest.

With less than 400 remaining individuals, Terrapins are critically endangered and have been included in The World’s Most 25 Endangered Freshwater Species in 2011. Also known as Saw-Jawed Turtles, the females can reach between 20 and 28 inches in length. They can live up to 80 years.

Even though they are native to Southeast Asia, there are a couple of Painted Terrapins at the Smithsonian’s National Zoo in Washington D.C. The experts are trying to prolong their species and save them from extinction. 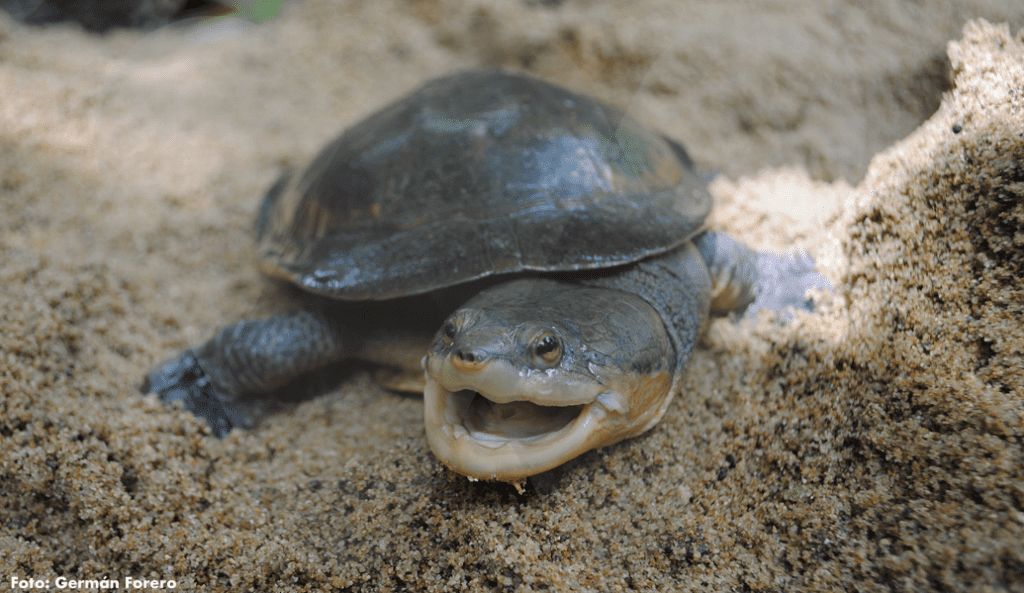 Dahl’s Toad-Headed turtle is a medium-sized turtle endemic to Colombia. This species lives in freshwater pools, streams, and swamps but spends its time on land. With around only 300 individuals left, the remaining population lives in fragments of smaller groups.

The Toad-Headed turtle’s ecosystem has been in danger for a long time due to the destruction of dry forests and its habitat. The IUCN Red List of Threatened Species has this turtle listed as critically endangered since 1996. The turtles have adapted to different environmental conditions to survive.

Dahl’s Toad-Headed turtles got their name in honor of Colombian ichthyologist George Dahl who worked on keeping the turtles safe. Ichthyology is a branch of zoology that studies different types of fish. 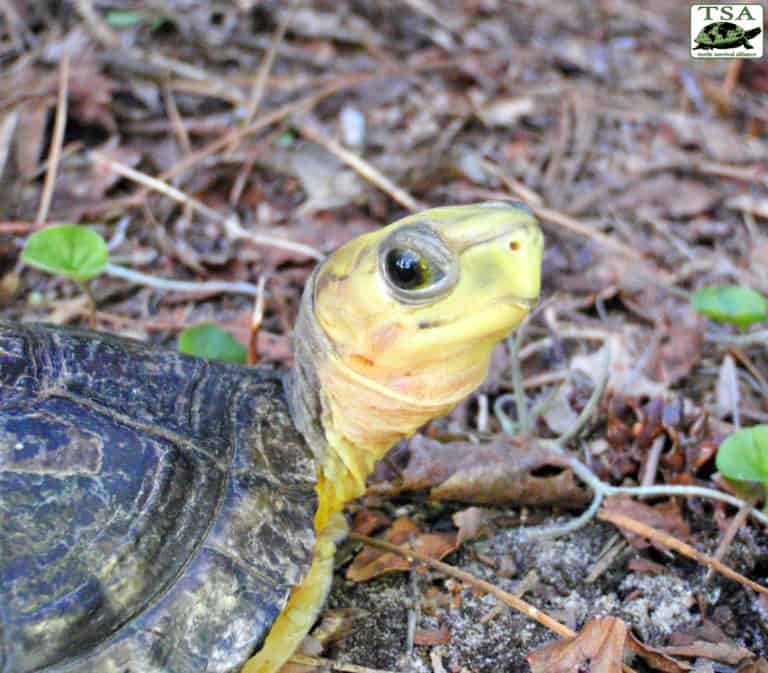 Golden-Headed Box turtles are endemic to Province Anhui in the East China region. The species is considered functionally extinct, but some experts think around 150 adult individuals are left. Box turtles live in clear and fast-flowing streams and rarely leave their habitats.

This turtle species was added to the IUCN Red List in 2000, but the population hasn’t increased. The main danger to the species is overexploitation for the pet trade and food. They are also smaller in size, as females can grow up to 5 inches while males grow up to 8 inches in length.

The Yellow-Headed Box turtle is highly endemic to the Anhui Province, found in only three rivers of the Huangshan Mountains. Anhui Province is the 8th most populated province in China and is close to Shanghai. 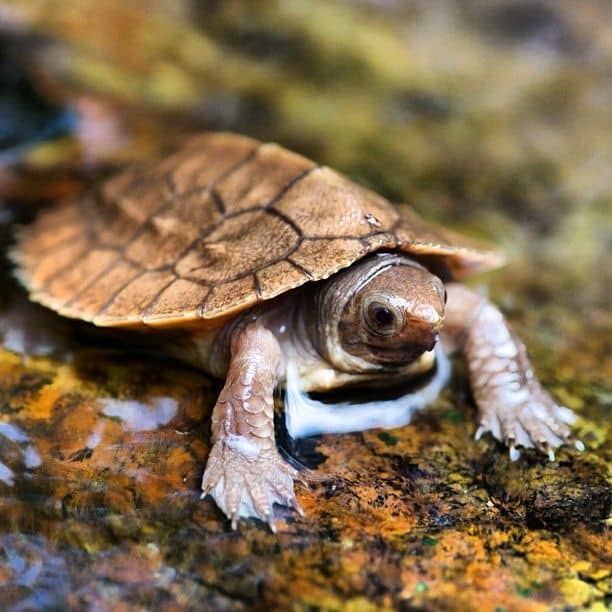 The Sulawesi Forest turtle is endemic to one of the four Greater Sunda Islands Sulawesi in Indonesia. It is 11 inches long, and females have a white-yellow head in females, while males are brown-headed. Females lay only one to two eggs during breeding seasons, contributing to their decreasing status.

The turtles live in freshwater swamps and lakes in the mountains of Sulawesi. Riverview Park & Zoo in Ontario, Canada, has succeeded in three successful hatching of Sulawesi turtles in the last decade.

Even with constant aims to increase the population, this species has been on the IUCN Red List since 2018.

Other than the Forest turtle, 79 endemic mammalian species in Sulawesi can’t be found anywhere else – the Tarsius primate, the Black Macaque primate, the Babirusa Wild Boar, the Maleo Birds, the Kuskus Bear, and the smallest primate named Tarsiers, to name a few. 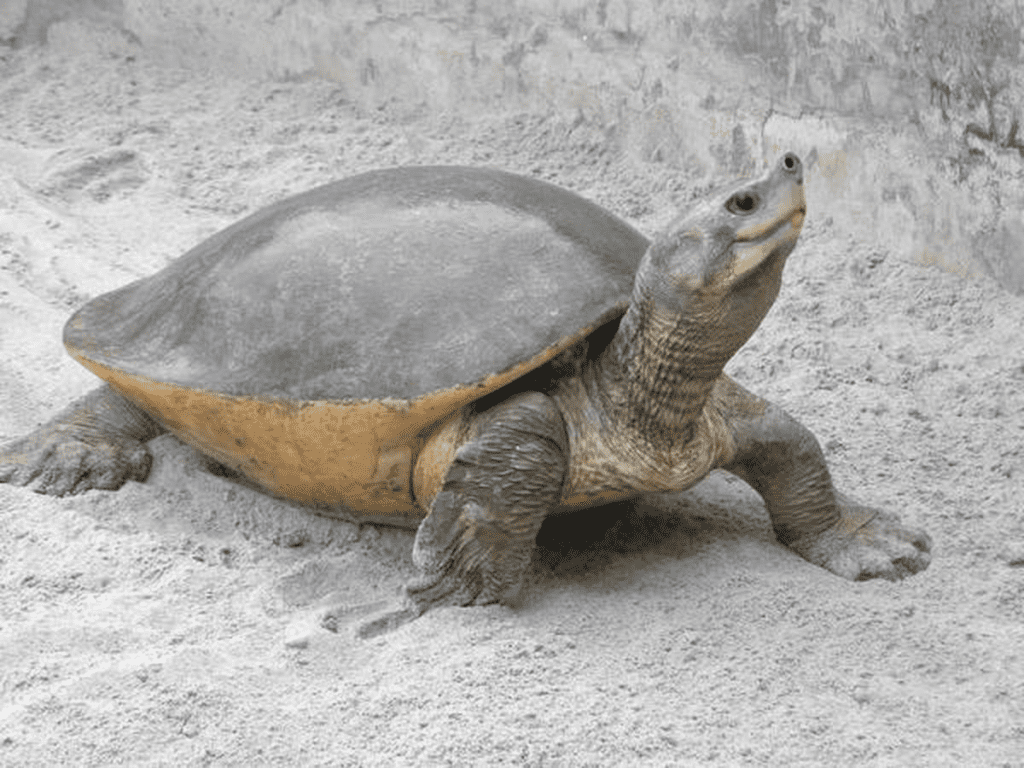 The Northern River Terrapin is one of the largest turtles in Asia, reaching up to 24 inches in length. It has a large, depressed shell with olive-brown legs. A great problem for the species is the trade of the remaining individuals in fish markets in India, contributing to their extinction.

The IUCN Red List of Threatened Species recorded less than 100 individuals of the River Terrapin in 2014, but the number has decreased with time. The species lives in freshwater habitats, finding small animals and plants to eat. It can live up to 25 years, usually laying 10 to 40 eggs during the breeding season.

The IUCN Red List of Threatened Species also lists the Southern River Terrapin as endangered specie. The cousin of Northern Terrapin was thought to have disappeared from Cambodia until new individuals were found in 2001. There are around 1,000 mature individuals left. 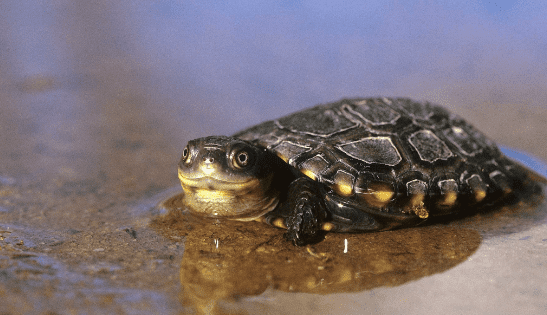 Possibly the smallest turtle on our list is the Western Swamp Turtle, only 6 inches in length. This short-necked turtle is the rarest Australian reptile, endemic to Western Australia. It is the only member of the Pseudemydura family that exists in small populations.

But with only 50 adult individuals left, this could also change soon. The swamp turtle has been on the IUCN Red List since 1996 as a critically endangered species. Their main predators are red foxes, but reduced rainfall and groundwater extraction add to their decreasing population. 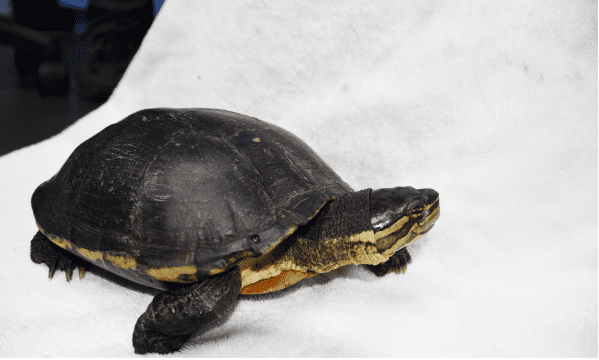 It’s almost impossible to find the Vietnamese Pond turtle in nature, as the species is captive-bred in a regulated environment. With less than 50 individuals, experts fear their extinction. Pond turtles can be easily distinguished by their yellow stripes down the head, growing up to 8 inches in length.

The IUCN Red List has listed Pond turtles as critically endangered since 2018. However, the fight for their status has been going on much longer. The remaining individuals enjoy the warm water, eating snails, crayfish, and insects in captivity.

The Vietnamese Pond turtle is one of only two endemic species to Vietnam. The second is the Southern Vietnamese Box Turtle (Cuora picturata), also listed as critically endangered on the IUCN Red List. This species of turtle survives in Cambodia and Laos. 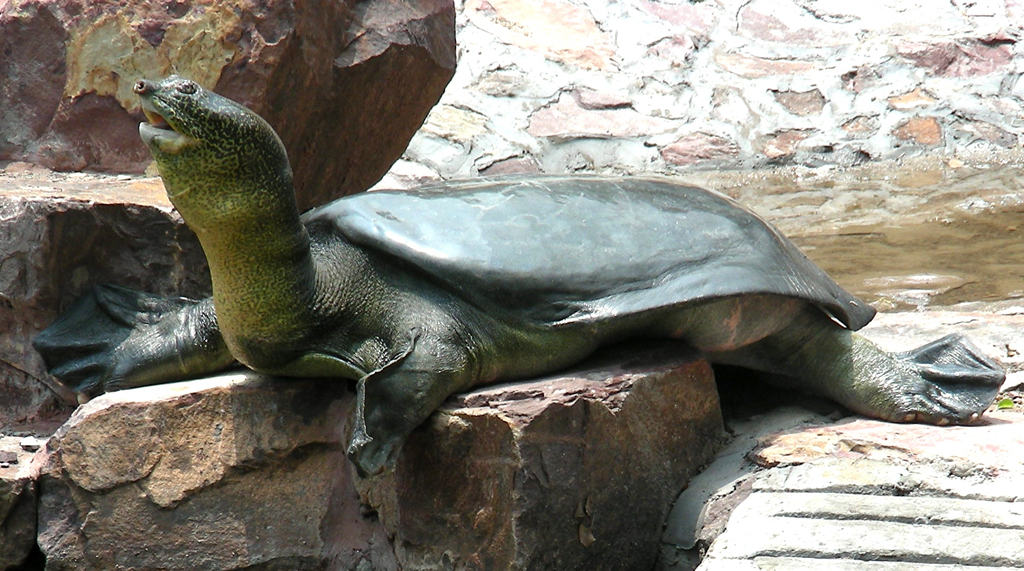 The Yangtze Giant Softshell turtle, also known as the Red River and Shanghai turtle, are the rarest turtles in the world, with only two living adults left. One resides in China, and the other turtle is in Vietnam’s wilderness. They eat fish, snails, frogs, and different leaves.

This giant softshell has a deep head under its shell, with a pig-like snout and a high set of eyes. Their habitat is deep underwater, where these turtles can stay for a long time.

The two remaining turtles continue on the IUCN Red List of Threatened Species since 2018 as critically endangered.

The last female of the ultimate remaining pair died in China’s Zoo in 2019. She had laid 80 eggs in 2008 after the Zoo brought the turtle to meet the only known male of the species in Suzhou Zoo. Sadly, none of the eggs were fertile.

8 Most Expensive Car Seats Currently on the Market