8 Rarest Seashells in The World

Collecting seashells is a popular hobby across the world. Beachcombers are always on the lookout for rare and beautiful shells of mollusks. Seashells come in a variety of shapes, colors, and designs, and they are found in abundance on the seashores.

The beauty of seashells has intrigued people from prehistorical times. They were used for jewelry, coins, and other tools. The seashell collection as a hobby reached its high during the 1850s and 60s.

Seashell auctions were a common phenomenon throughout the second half of the 19th century and early 20th century.

Rare and perfect specimens would sell for high prices at these auctions as newly rich merchant princes took an interest in the seashell collection.

The craze died down after a few decades, but the seashell collection continued to be a popular hobby among the common mass.

Here we list 8 of the rarest seashells found today around the world. They are adored for their beauty, glamour, and perfection.

Rarity: Rare
Geographical distribution: Indo-Pacific waters
Habitat: Rocky or sandy bottoms near the shore waters
Appearance: Off-white with a brownish tinge. It has a long siphonal canal and numerous spines 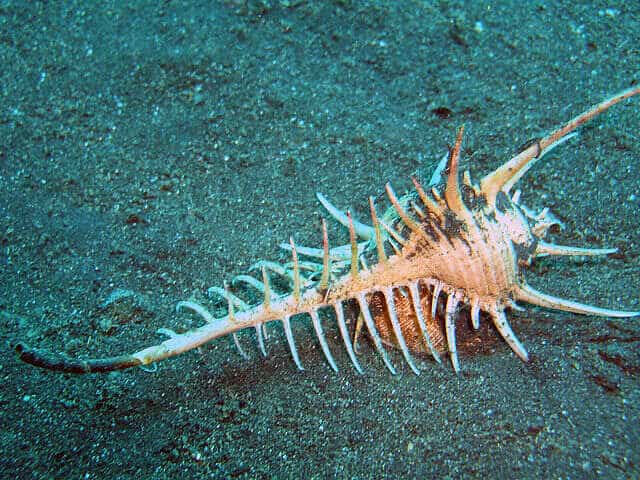 It is a predatory sea snail that grows up to 5-6 inches. Like other Murex snails, it feeds on mollusks.

The shell looks interesting as it has more than one hundred spines. The spines offer protection to the animal from predation.

They also prevent the snail from sinking in the soft mud. The spines are very fragile and easily break away.

This seashell got its name from the Greek goddess Venus. According to mythology, she used to comb her hair with this seashell.

Rarity: Rare
Geographical distribution: Oceans in the Indo-Pacific region
Habitat: Near the surface of tropical and subtropical seas
Appearance: The outer surface of the shell is white with brown stripes, and the inside is white; the shell has chambers 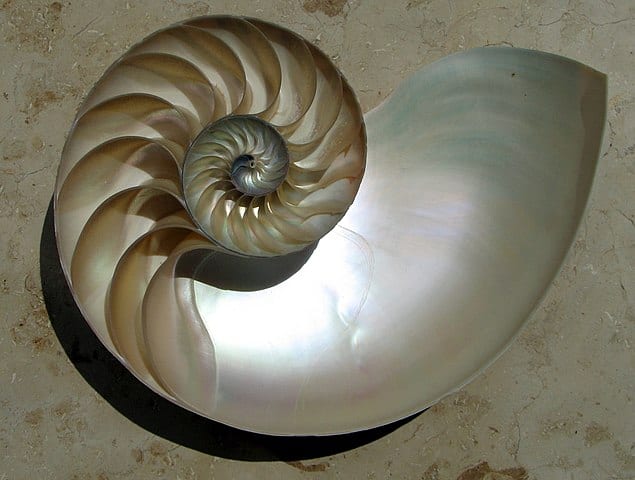 Nautilus Shell is one of the most interesting and beautiful seashells and thus has a high demand in the market. It is also rare to find a perfect Nautilus Shell.

Nautilus is a cephalopod mollusk found that had chambered shells. The external surface of the shell is smooth, coiled, and about 10 inches in diameter. It consists of 36 separate chambers. The body of the mollusk resides inside the outermost chamber, which is also the largest one.

The other chambers work as the ballast tanks of a submarine.

Nautilus is also called the “Living Fossils” because this species has been around for about 500 million years. 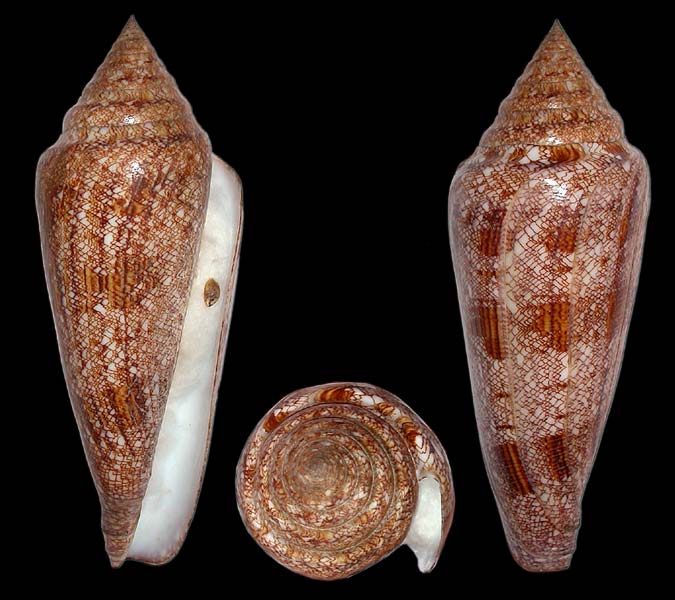 Conus Gloriamaris, commonly known as the Glory of the Sea Cone, has long been considered the rarest seashell in the world. This seashell was first discovered sometime in the mid-18th century.

For about two centuries, it was regarded as the most valuable seashell, and its specimens were only possessed by museums and wealthy private collectors.

However, after the habitat of this seashell was discovered in 1969, the price dropped dramatically.

The glory of the Sea Cone is still scarce, and finding a perfect specimen can be difficult. But they are usually sold for $100 at auctions.

Conus Gloriamaris is primarily found off the Solomon Islands. However, some specimens can also be seen on the shores ranging from the Philippines and eastern Indonesia to Samoa and Fiji.

In 1792, a private collector purchased one Conus Gloriamaris at an auction with thousands of dollars only to destroy it in order to maintain the value of another Conus Gloriamaris Shell that he already had in his collection. 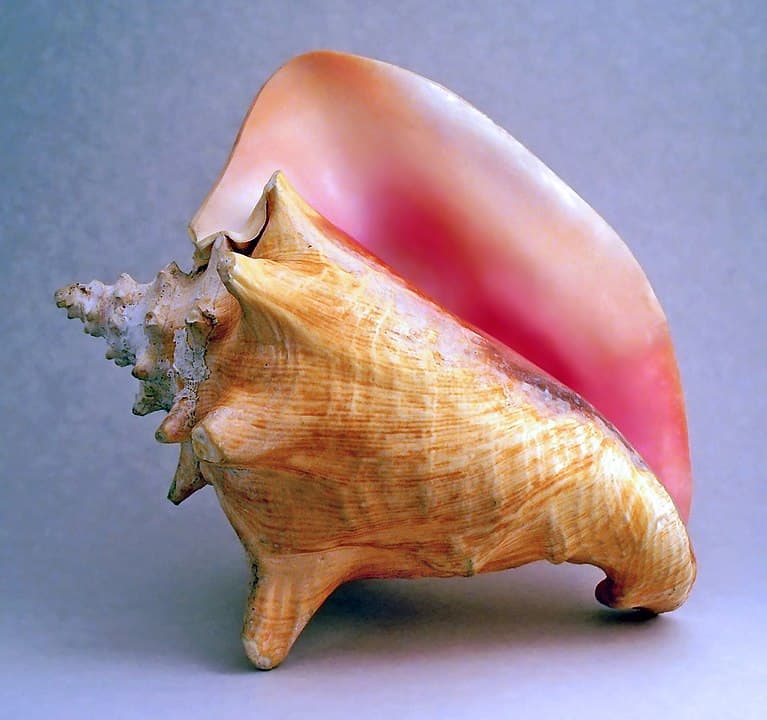 Queen Conch is a large marine snail that grows up to one foot. It takes three to five years for a Queen Conch to reach that length, the rest of its life, it uses its growth resources to thicken its shells. An individual Queen Conch can live up to 40 years.

The shell of a Queen Conch is so hard that even the most specialized conch predators cannot break it. However, a species called Nurse Shark can suck the flesh of a Queen Conch out of its shell by creating enough pressure.

Queen Conch is highly sought after for its flesh, and due to irresponsible fishing, its population is declining rapidly. In some areas, it has completely disappeared.

Free divers or Scuba divers catch Queen Conchs by hand. It enables them to catch every individual in an area. Besides, as the Queen Conchs grow full length at an early age, the divers cannot really distinguish between mature individuals from juvenile ones. As a result, they often catch younger conchs that further threaten the existence of this species. 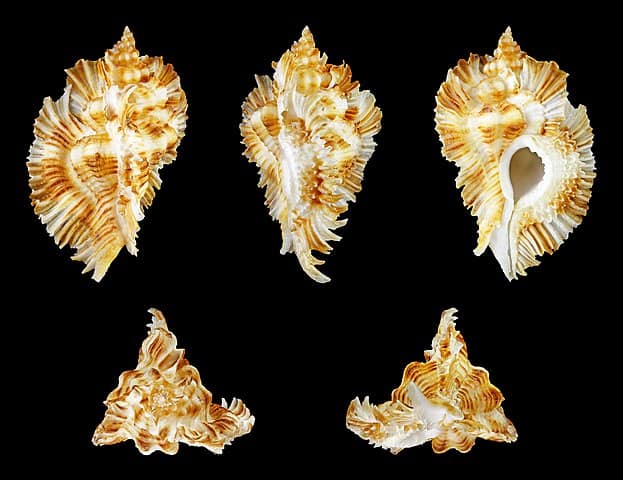 Miyoko Murex or Chicoreus miyokoae is one of the most remarkable sea snails. The shells are relatively small and only grow up to 1.7 to 3 inches. The outer surface has a ribbed texture and is covered with delicate frills.

The unique look of the shell makes this species highly recognizable. However, the frills on the shell are very fragile and easily break away. Thus, finding a Miyoko Murex Shell in perfect condition is very difficult. It makes this shell even rarer.

Usually, the Miyoko Murex found in the Philippines is orange-brown in color with white patches.

However, the type of Miyoko Murex found in the Solomon Islands is mostly pure white.

Seashells are composed of Calcium Carbonate along with different proteins secreted by the animal. 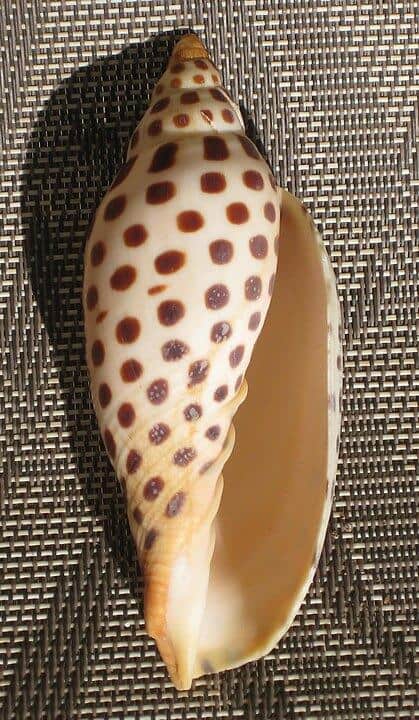 Junonia or Scaphella junonia is so rare that it has achieved mythical status. The Shell of Junonia is highly coveted by the collectors’ community.

Junonia is a species of large sea snail belonging to the Volutidae family. It lives 95 feet to 415 feet deep and 40-60 feet offshore in tropical western Atlantic. As they live on the ocean floor, it is less likely to wash up the shells on the beach.

Sometimes the shells travel to the shore if there is a storm or hurricane. But most often, these shells are broken. So, finding a Junonia Shell in perfect condition is almost impossible.

The largest recorded Junonia is about 6 inches long. The average length of this species is 3-4 inches. The shell is cream-colored with around 12 spiral rows of brown dots.

Junonia Shells can be most commonly found in Southwest Florida, especially Marco and Sanibel Islands. 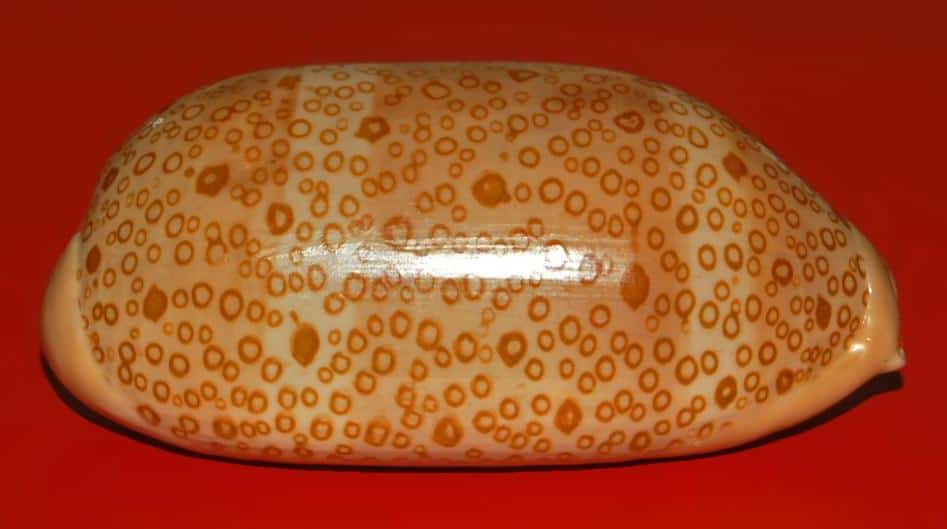 Hundred-Eyed Cowrie is one of the rarest seashells found in the world. Cowrie shells are shaped like eggs and have a porcelain-like finish. The average length of cowrie varies between 0.5 to 7.4 inches.

The Hundred-Eyed Cowrie is a larger variety with an average length of 3.15-4.5 inches.

This cowrie gets its name from the tiny brown rings that cover its outer surface and look like eyes. The size and number of the rings can vary significantly from one cowrie to another.

The price of a Hundred-Eyed Cowrie depends on the uniqueness of the pattern of the rings.

Hundred-Eyed Cowrie is found in the Indian and Pacific Oceans. It is most commonly seen in the seas off Chagos, Aldabra, Kenya, Madagascar, the Mascarene Basin, Mozambique, Mauritius, Somalia, and Tanzania.

In the early era, cowrie shells were used as a currency in many countries in Asia and Africa.

Rarity: Extremely rare
Geographical distribution: From the Philippines and New Guinea to the Indian Ocean
Habitat: Deep on the sandy sea floor
Appearance: Chocolate-brown to the butterscotch-colored shell with whitish spots 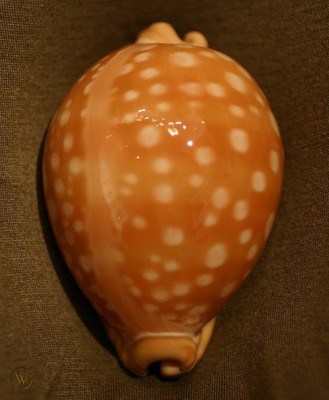 Until late that decade, this species was known from only two examples. One of them was kept in the National Museum of London, England and the other one was in the Harvard University Museum of Comparative Zoology.

Two more specimens of this rare seashell were found in the late 1960s and early 1970s. During the following decades, it became more common, and the price continued to decrease.

The first specimen of the White-Toothed Cowry was found in the stomach of a fish caught in the Philippines’ Sulu Sea.

8 Most Expensive Heels in the World