Despite popular misconception, lobsters are not bright red while they’re alive (although natural red lobsters do exist, they’re more muted). Lobsters, regardless or their color when alive, turn red when they’re cooked. This is because the astaxanthin (a pigment protein) in their shells turns red after its exposed to heat.

While lobsters are typically a muddy brownish green color, they can appear in a wide variety of shades and patterns. These colors are rare because they increase a lobster’s vulnerability to predators in the wild. This list contains all of the known color variations, which range in rarity.

Occurrence: 1 in 2 million
Notable Specimens: Lord Stanley
Most Recently Found In: Massachusetts in 2019 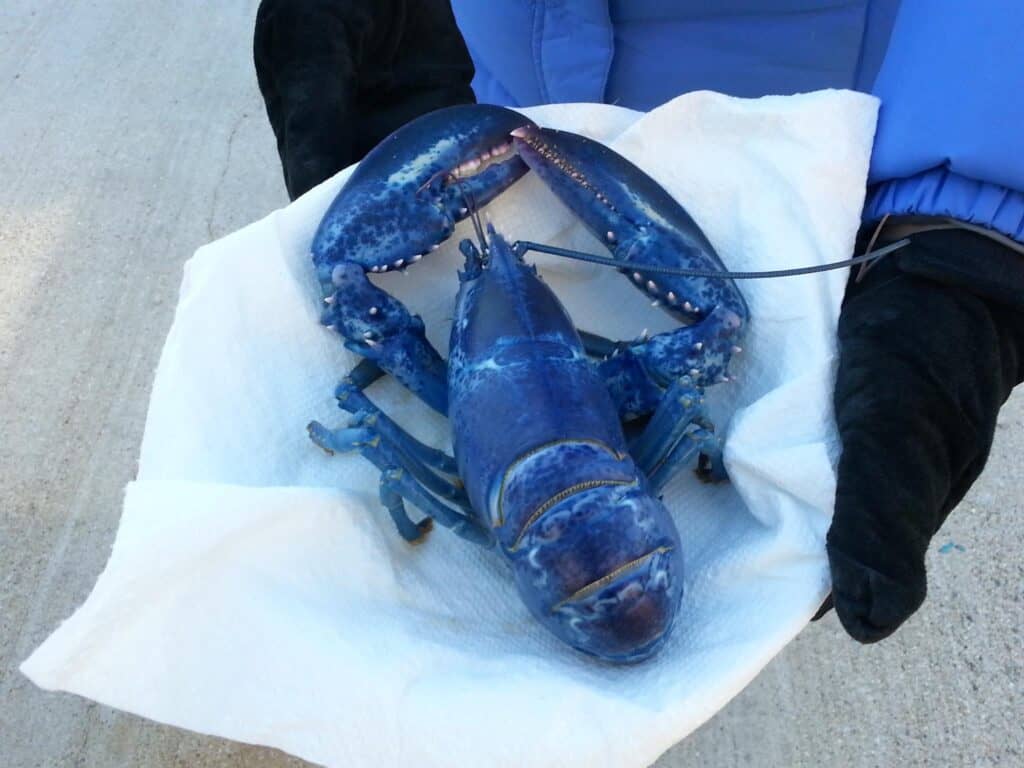 The bright blue coloring is caused by a genetic mutation that produces an overabundance of astaxanthin-wrapping proteins. These proteins turn all the red astaxanthin into blue crustacyanin.

The fisherman in the Nova Scotia, Canada region believe that catching a blue lobster is a sign of good luck.

Occurrence: 1 in 10 million
Notable Specimens: Ruby
Most Recently Found In: Caught in Massachusetts, but found in New York City restaurant in 2016

It’s probably pretty common for people to believe that lobsters are bright red, but this only happens after they’re cooked. However, there is a one in ten million chance that a live lobster will be naturally red.

A rare red lobster popped up at the Burger & Lobster restaurant in New York City and was dubbed Ruby. According to executive chef Danny Lee, Ruby look like she had been cooked, but was very much alive. The restaurant donated Ruby to the  Long Island Aquarium and Exhibition Center in Riverhead, New York.

Naturally red lobsters can turn even redder if fed a diet of crabs, crab shells, and shrimp. 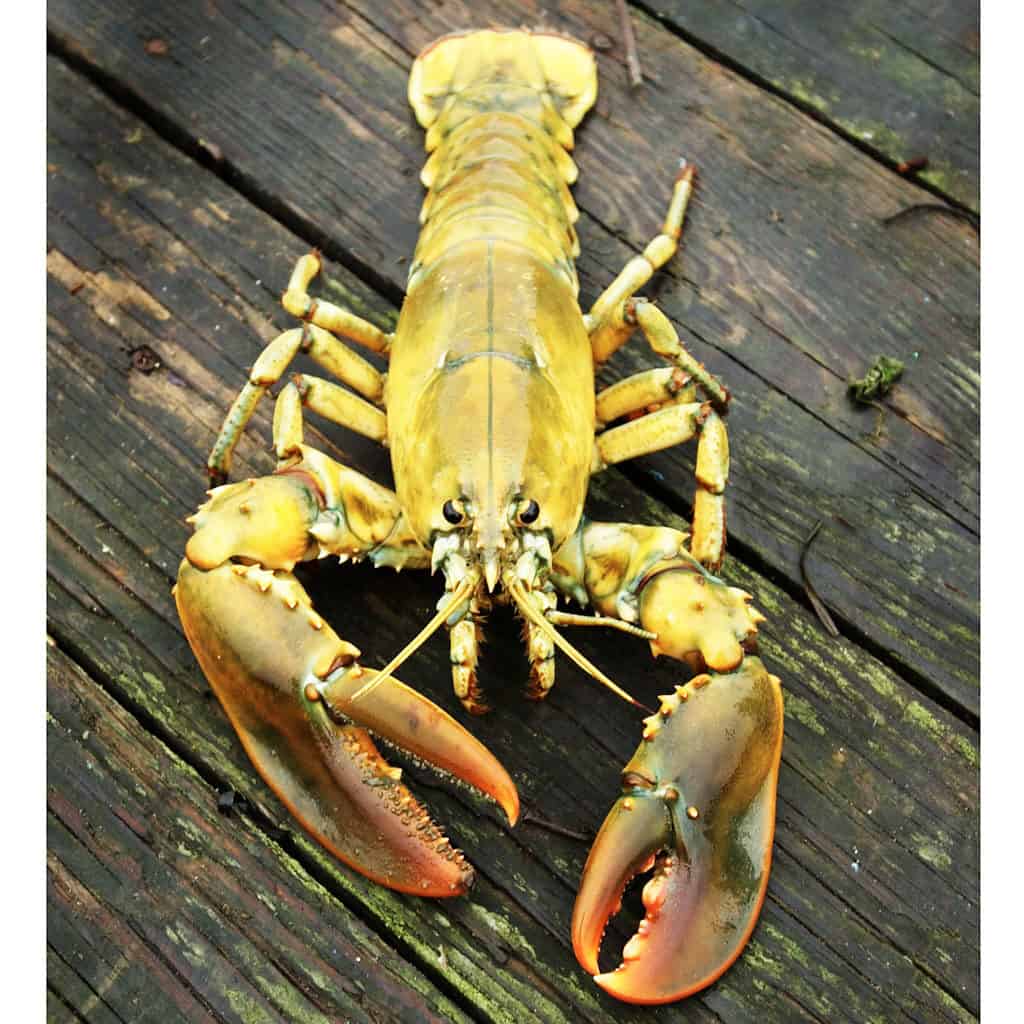 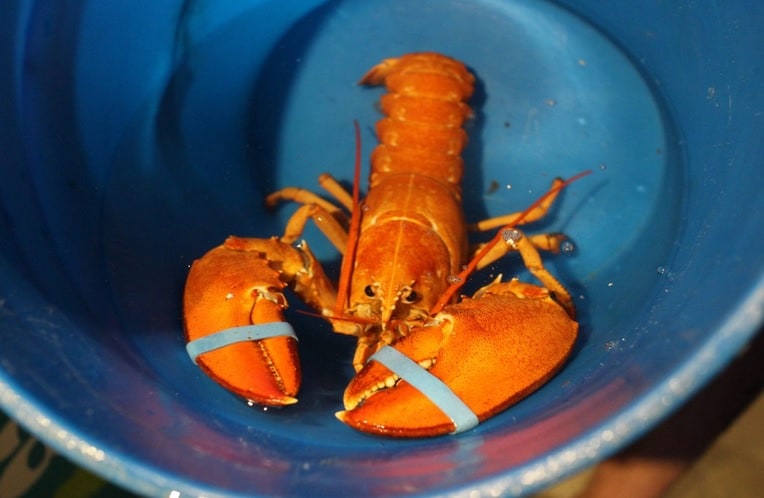 According to scientists, orange lobsters lack the protein that make them the traditional muddy brown color, so they show more carotenoid pigment instead.

Occurrence: 1 in 30 million
Notable Specimens: Eve, Friendly Kreuger, and Calvin
Most Recently Found In: Caught in Maine, but discovered at Maryland seafood market in 2018 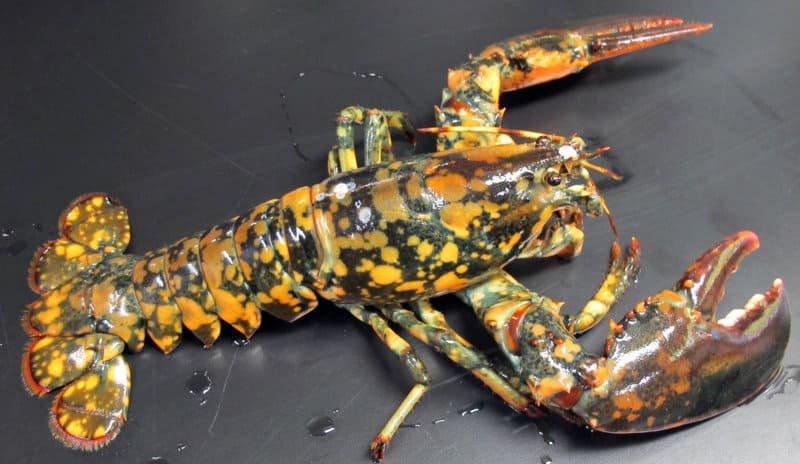 Calico lobsters, which have a mottled black and orange shell, are some of the most unique lobsters out there. According to the University of Maine’s Lobster Institute, finding a calico lobster is a 1 in 30 million chance.

Surprisingly, calico lobsters are necessarily noticed by lobstermen (probably because of their darker color) when they’re captured. Instead, calico lobsters have become famous for being spared from the dinner plate after being noticed by restaurant staff or seafood market employees. Luckily, these calico lobsters were donated to research aquariums.

The Biomes Marine Biology Center in Rhode Island reported that an unusually high number of calico lobsters were discovered in 2009 and the aquarium has been gifted several calico lobsters in recent years.

Occurrence: 1 in 50 million to 1 in 100 million
Notable Specimens: Pinchy the “Halloween” Lobster
Most Recently Found In: Maine in 2019 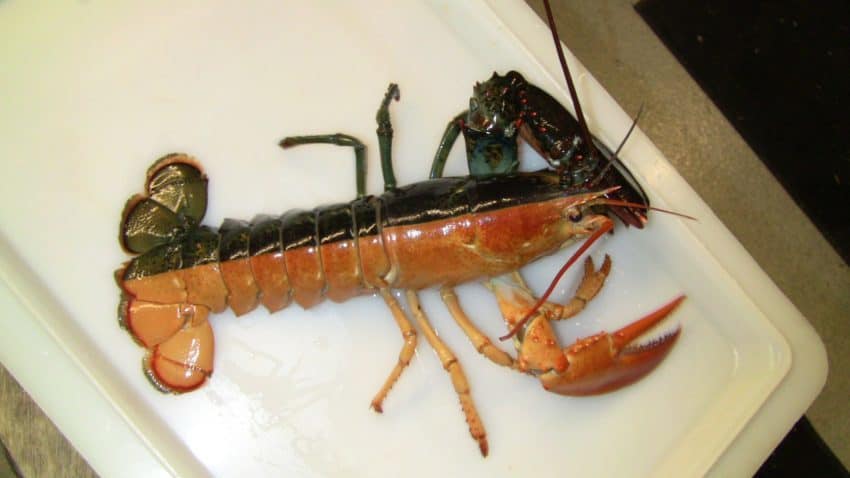 Split-colored lobsters can come in any color combination, but one of the most striking and common is the “Halloween” variety. As their name implies, Halloween lobsters are half black or dark brown (a lobster’s normal color) and half orange. The split-coloring is most likely due to a complete cellular division when the lobster egg is first fertilized.

Almost all split-colored lobsters are hermaphroditic, which means it has both male and female sexual characteristics.

Occurrence: Unknown for sure, but believed to be as rare as white lobster (1 in 100 million)
Notable Specimens: Lucky
Most Recently Found In: Casco Bay, Oregon, USA in 2019 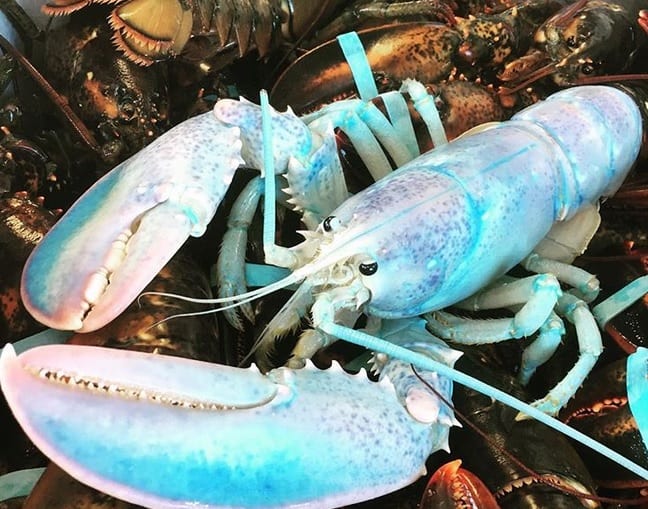 The cotton candy or pastel lobster is believed to be about as rare as the white lobster. Scientists also think that the unique pink and blue coloring under a translucent shell may just be a sub-type of an albino lobster.

One of the first times that a cotton candy lobster made headlines was in 2018 when fisherman Robinson Russell donated “Lucky” to the Huntsman Marine Science Centre in New Brunswick. Lucky’s story went viral and was even covered by National Geographic. 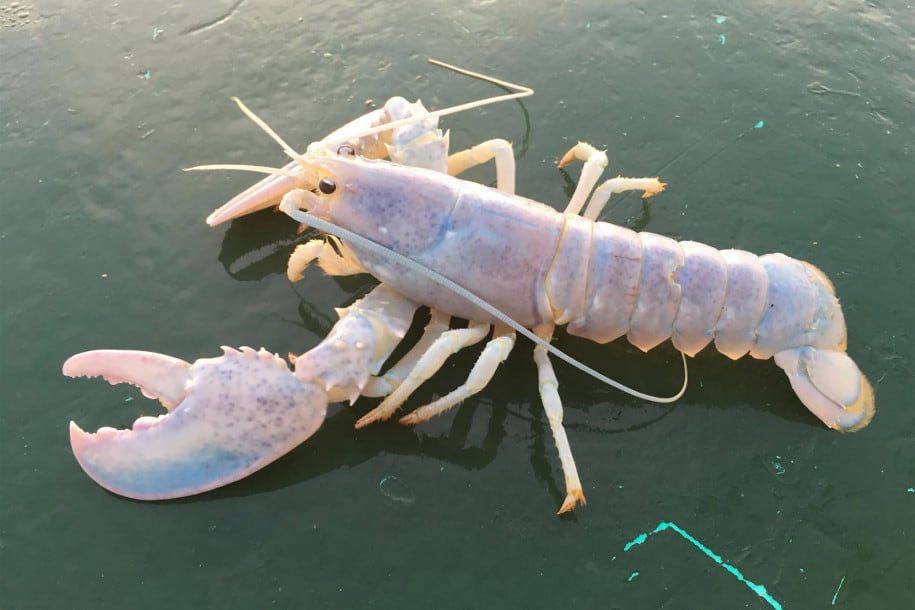 White lobsters – also known as translucent, ghost, and crystal lobsters because of their pale coloring – are the rarest lobsters in the world. With an occurrence of only 1 in 100 million lobsters, ones with white coloring only pop up a few times every four or five years.

Typically white lobsters come about due to albinism, other genetic mutations, or an unusual diet. In 2018, an Irish fisherman donated the female white lobster he found to Oceanworld Aquariurm in Dingle, Ireland to start a breeding program.

Michael Tlusty, associate professor of sustainability and food solutions at the University of Massachusetts Boston, accidentally created white lobsters when he fed them a cheaper food alternative that lacked the necessary pigment for normal coloring.