What Color Pomeranian Is the Most Expensive? (Top 10 Ranked)

Pomeranians! Sometimes called Poms, these cute little dogs are known for their small size and tendency to bark. They’re also a very diverse breed with more than 10 official color varieties.

Poms have a long history. Iconic historical figures like Queen Victoria were fans and people all over the globe have been joining Pomeranian clubs for decades.

Amazingly, these little doggies are related to sled and guard dogs. Years of selective breeding shrank the Poms’ stature, but this dog still has some protective and fierce instincts (hence their characteristic barking).

Learn more about the history and price of Pomeranians with this top 10 list! 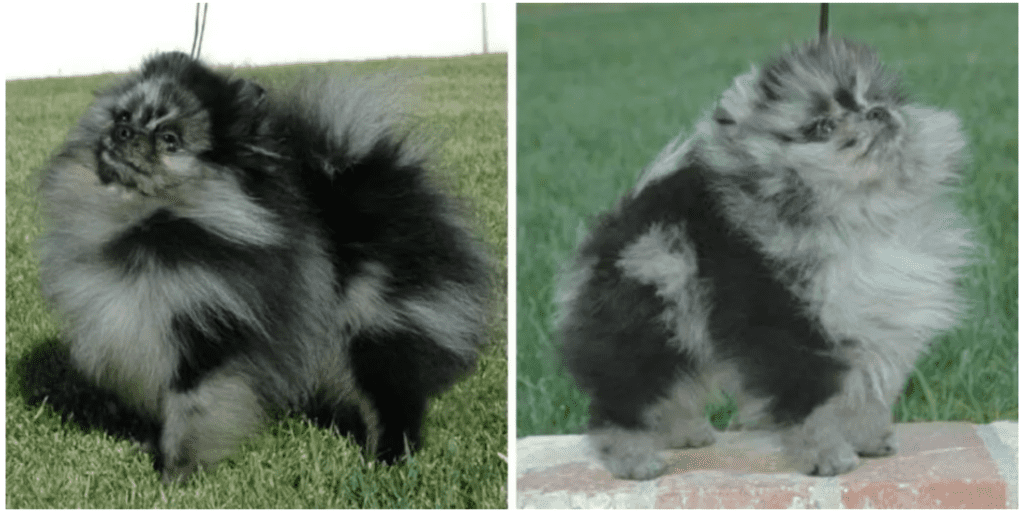 Merle Pomeranians are technically defined by their fur color patterns rather than their specific colors. However, Merles are often predominantly orange.

As a relatively new variety to the Pom world, Merles can be very pricey and very hard to find available for adoption. Estimates say this variety sells for at least $1,500 — but that price can climb as high as $6,000!

Although most Merles are orange, this variety can also be chocolate, red, blue, and more.

Breeding between two Merles can result in significant health problems in the puppy, so breeders use one Merle parent and one non-Merle. 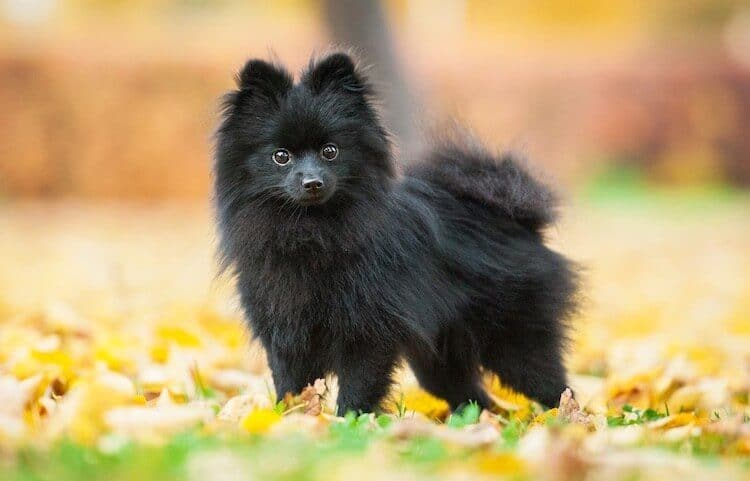 Black Pomeranians come in at number nine with a price tag of $2,000 or more. As a relatively rare color, black Poms have a lot of fans and demand a steep price tag.

Black Poms have been around for a while. The variety was even around during Queen Victoria’s reign — and the Queen was a fan. At one point, the Royal Kennels was home to more than 30 Poms of all colors! The Queen’s love of this breed made Poms popular all across Europe.

Some people consider black Poms a separate breed, but they’re actually 100% under the Pomeranian umbrella.

Typical Price: $2,080 or more
History: Pomeranians were on the Titanic
Pomeranian Fact: These Poms can cost as much as $2,500
Interesting Fact: Real chocolate Poms have no black features 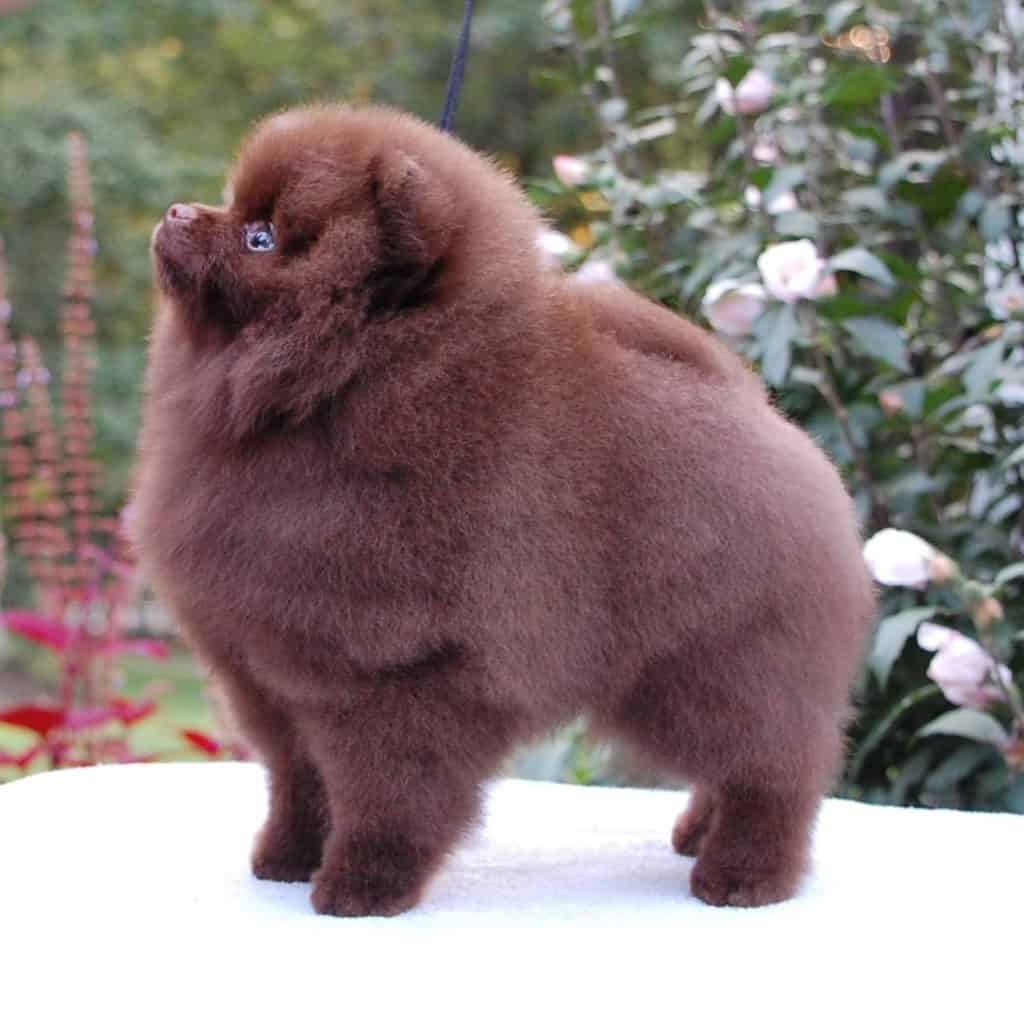 Chocolate Poms are totally brown — from the edges of their eyes to their paws. No part of a true chocolate Pomeranian is black.

As a somewhat rare breed, chocolate Poms cost about $2,080 on average. That price can climb as high as $2,500 depending on the breeder!

As such an old dog breed, Poms have been present at historic events like the sinking of the Titanic on April 15, 1912. Luckily, some of these little dogs survived that ill-fated voyage.

The Pomeranian breed comes from a region near Poland and Germany formerly known as Pomerania.

Typical Price: $2,300 or more
History: Modern Poms are related to sled dogs that worked in the Arctic
Pomeranian Fact: Poms used to weigh about 30 pounds on average
Interesting Fact: Poms live between 12 and 16 years 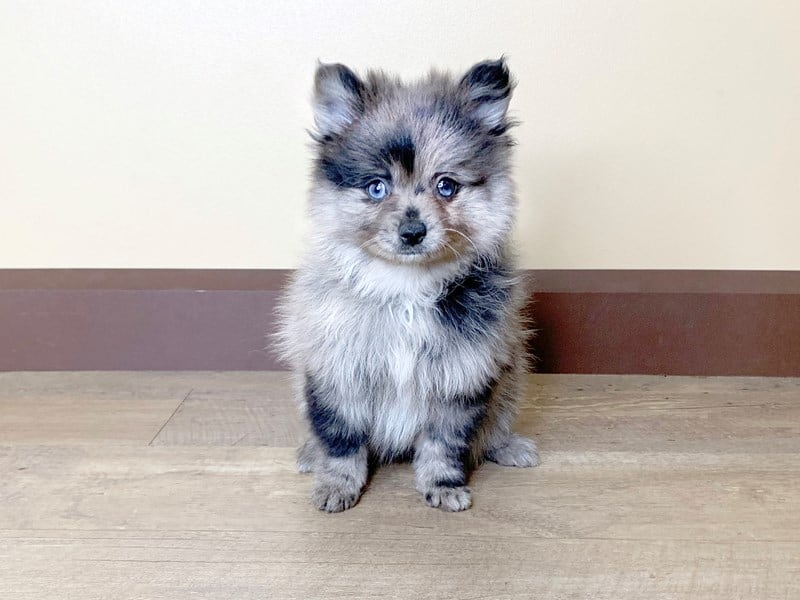 The adorable blue Pomeranian is a rare and pricey variety that can cost $2,300 or more. Like all Poms, the blue variety is related to sled dogs that worked in the Arctic pulling heavy loads across the snow.

Despite their modern-day size, Poms used to be about 30 pounds on average. Over time, selective breeding made these dogs much smaller and less athletic — turning them from sled dogs to lapdogs.

Pomerania, the region these dogs come from, was filled with lakes and small farms. The region was split up and changed during WWI and WWII.

Typical Price: $2,390 or more
History: Dogs related to modern Poms were once used to guard houses
Pomeranian Fact: Some Poms may become red as they get older
Interesting Fact: Red Poms are sometimes mistaken for the orange variety 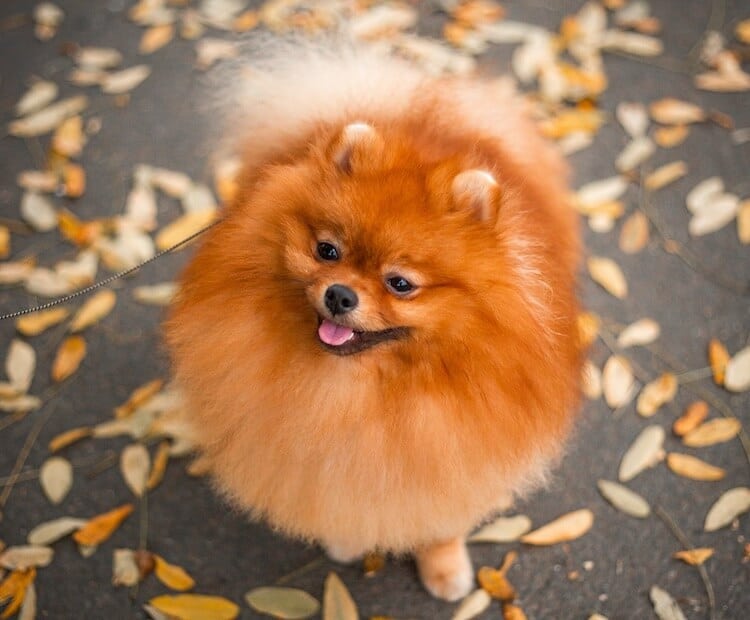 The red Pom is often mixed up with its lighter cousin: the orange Pom. Although they look similar, the orange version is almost a light golden color while the red variety has deeper, rusty fur.

Most people probably think of Poms as small lap dogs, but did you know they’re related to guard dogs? The bigger ancestor or the modern Pomeranian was often used to guard houses or even protect livestock!

Red Poms are similar to black Poms because they share the E Locus gene, a genetic attribute that influences fur color in dogs.

Typical Price: $2,430 or more
History: Around the 18th century, the Pom became an established breed in England
Pomeranian Fact: Poms are known as “toy dogs” because of their small size
Interesting Fact: Some cream Poms are born with white fur that changes color as they mature 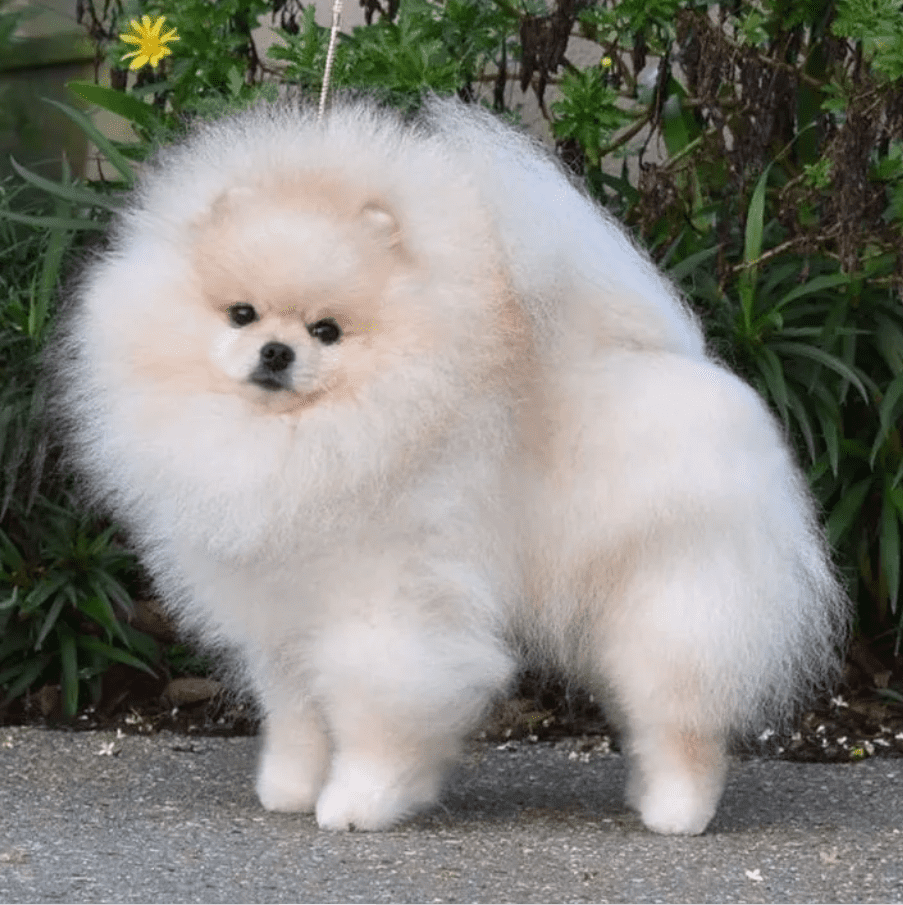 There are technically two variations of the cream-colored Pom, but both are defined by their light fur. Cream Poms are also expensive regardless of their variation, with price tags sitting at about $2,430.

Many cream Poms are born with white fur that changes color as they get older. The white fur often takes on an orange-ish quality, adding warmth and “creaminess” to its appearance.

Poms have a lot of history among Royalty. Beyond connections to Queen Victoria, this small breed was a favorite of Queen Charlotte. These Poms were kept as pets rather than guard or sled dogs.

Typical Price: $2,530 or more
History: In 1862, three Poms were shown at the Birmingham dog show
Pomeranian Fact: The Pomeranian Club was founded in 1891
Interesting Fact: Poms started getting popular in the U.S. around the 1880s 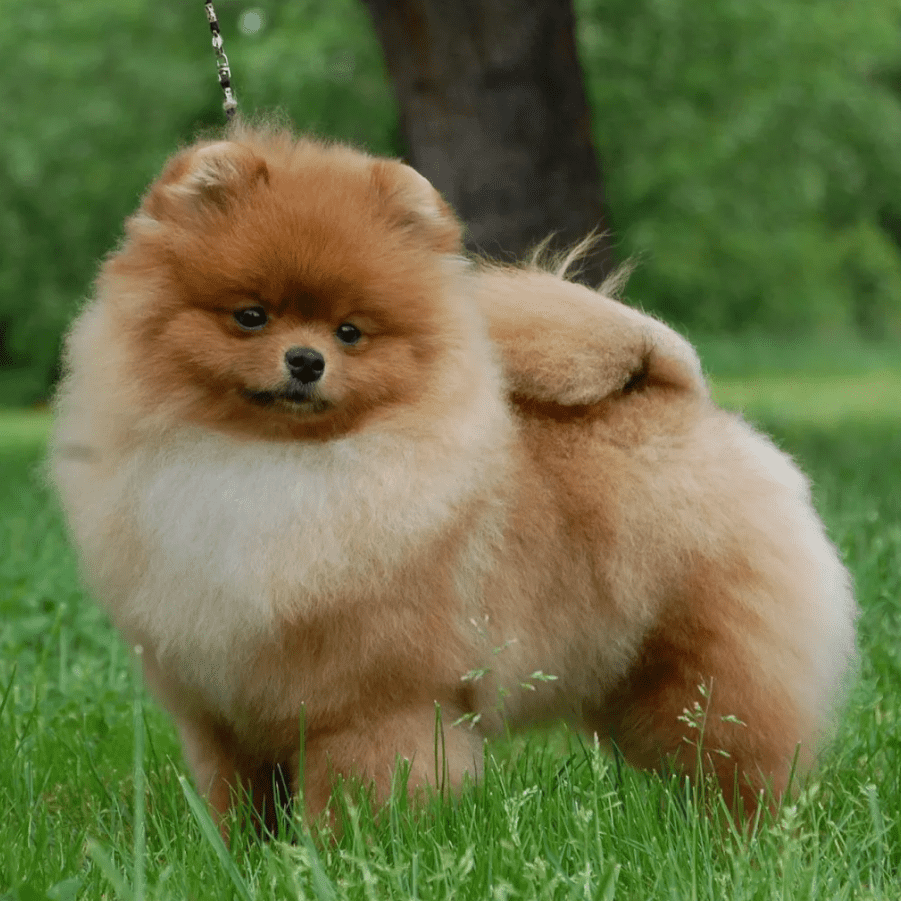 Coming in at number four is the orange Pom. This variety is similar to its red cousin, but its coloring is different if you take a close look. A lot of orange Poms are lighter than red ones, but some have that rusty quality that reds exhibit. This can make it hard to differentiate the two. Orange Poms are also more expensive, costing $2,530 or more.

Poms got really popular toward the end of the 1800s. In those years, the Pomeranian Club was founded in the U.K. while Poms started getting noticed in American dog shows.

Typical Price: $3,000 or more
History: During the 1890s, breeders wanted to make Poms smaller
Pomeranian Fact: This Pom is white with patches of color
Interesting Fact: Pom colors like orange and blue became popular in the late 1800s 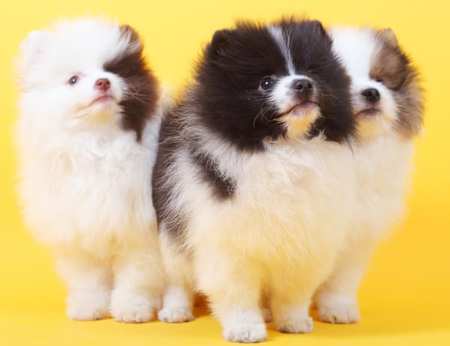 Heading into the top three we find piebald Poms! This variety is defined by its white base coat with splotches of color. Color splotching among piebald Poms is found in a range of shades and many feature more than one color variation.

At $3,000 per pup, piebalds are the third-most expensive Pomeranians in the world.

In the early 1900s, representatives from several of the world’s Pomeranian clubs gathered to discuss standards for the breed. At that meeting, the Pom fans decided 20 pounds was the largest a Pom could be while Poms under seven pounds were officially classified as “miniatures.” 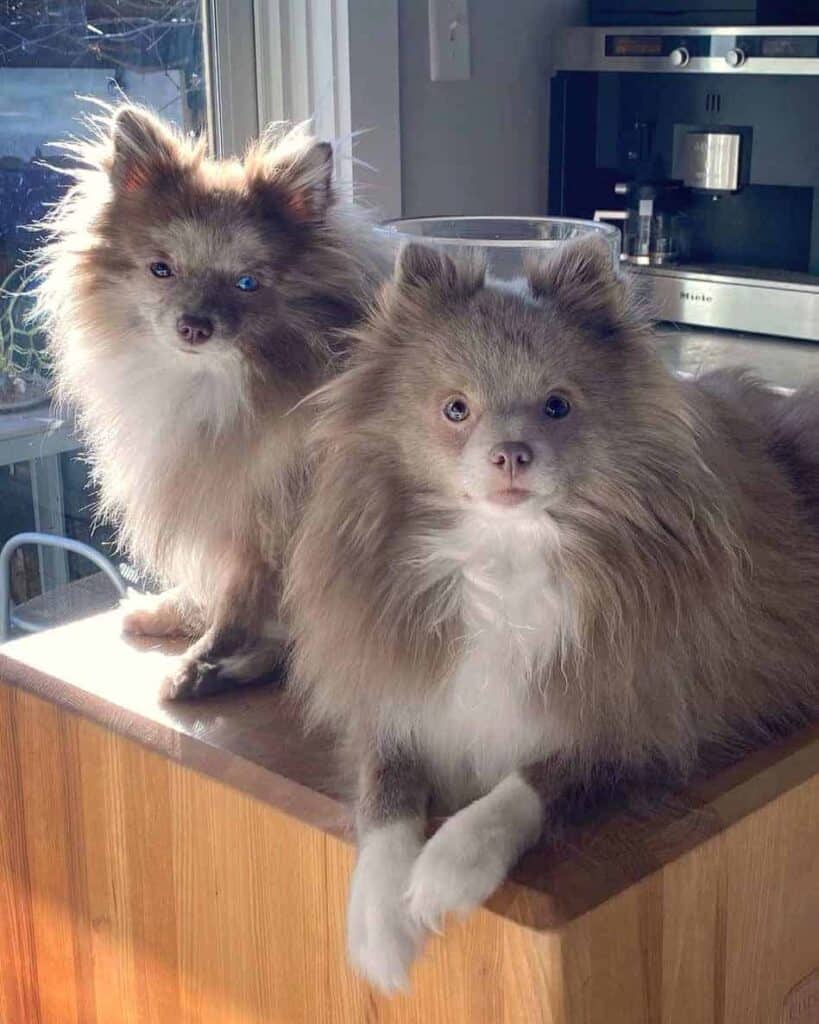 Coming in at number two is the cute lavender Pom! This adorable variety easily costs $3,000 and is historically considered a purebred variety. That alone is enough to make lavender Poms expensive, but their unique coloring really pushes up the price tag.

Some lavender Poms can sell for as much as $4,000. Others cost slightly less, but many high-end breeders charge top dollar for these purple puppies. 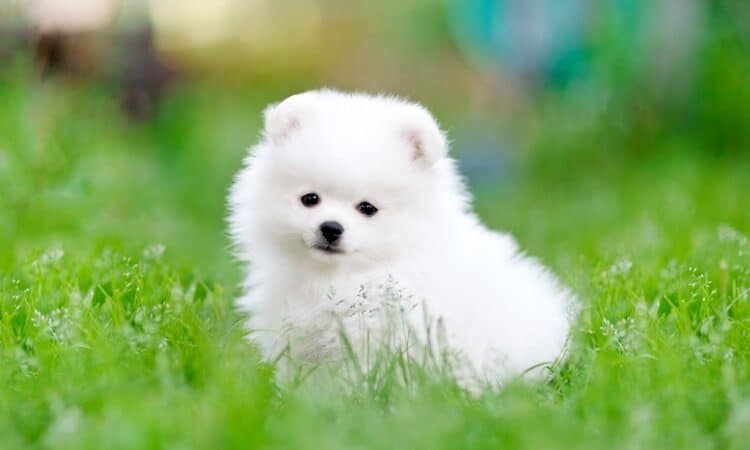 At $4,000 or more per pup, white Poms earn the title of most expensive Pomeranian color! These cute little dogs have pristine white fur and weigh just a few ounces when they’re born. The variety is active but it tends to match the temperament of the owner — if you’re calm, your Pom will be calm.

This breed is known for being a little protective and potentially aggressive toward strangers. Poms’ ancestors were sled and guard dogs, so it’s in their blood to be fierce! However, the relatively small size of modern Pomeranians keeps them from being truly threatening, and owners can avoid aggressive behavior by socializing them from a young age.

Poms are “renowned barkers” and tend to be a little yappy.

9 Most Expensive Diamonds from Around the World