8 Most Expensive Crabs in the World

That’s not entirely true. Evolution doesn’t “like” anything. It’s just a natural process that develops and changes species. It doesn’t have likes or dislikes.

For decades, scientists have been aware of carcinization, the natural phenomenon of organisms evolving into crabs or crab-like creatures.

According to an expert at Florida International University, “Carcinization can be defined as the evolutionary process leading to the crab-like form.”

Evolutionary biologists aren’t sure why carcinization occurs, but some say it might be caused by the crab’s ability to survive. The crab-like form might have features that make it more resilient than other organisms, making it more likely to climb the evolutionary tree.

No matter why they exist, Earth is home to a bunch of crabs (about 5,000 unique species to be exact).

With so many crabs, it can be hard to pinpoint the most expensive varieties. Some are common foods, others are protected and face extinction due to habitat loss. With this list, we’ll look at the most expensive crabs you could actually buy. Keep reading to learn more! 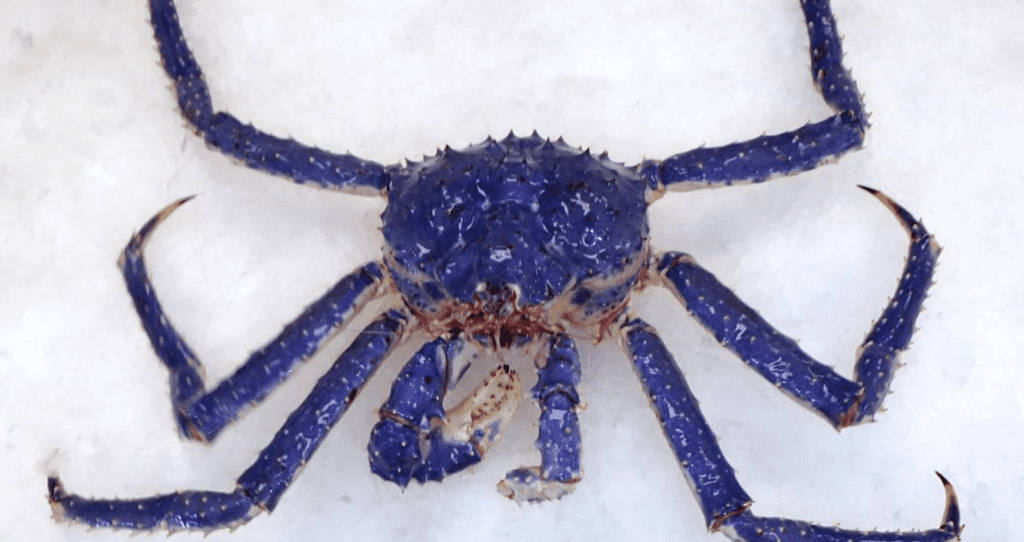 First up is the elusive blue king crab. The creature is often found near the chilly Diomede Islands, a small region between Alaska and mainland Russia.

Blue king crabs eat worms, small fish, algae, and even other crabs! Beyond the Diomede Islands, these blue creatures live in cold waters surrounding Hokkaido, Japan, and the Sea of Okhotsk.

Blue king crab prices are hard to nail down, but you could easily spend about $30 on one of these animals. The species is relatively rare and not as popular for eating as the Alaskan king crab. The species’ population is also spread pretty thin, with small pockets living scattered across the globe.

Warming oceans could be causing the crabs’ strange distribution. The animal evolved to live in cold water, so changing temperatures can isolate them in colder remote regions.

All those factors make the blue king crab hard to find and pretty expensive.

The Alaska Department of Fish and Game says the blue king crab population is quite low, so commercial fishing companies can’t catch them. The Department says there aren’t any direct threats causing the risk of extinction, but the species’ small population is concerning. 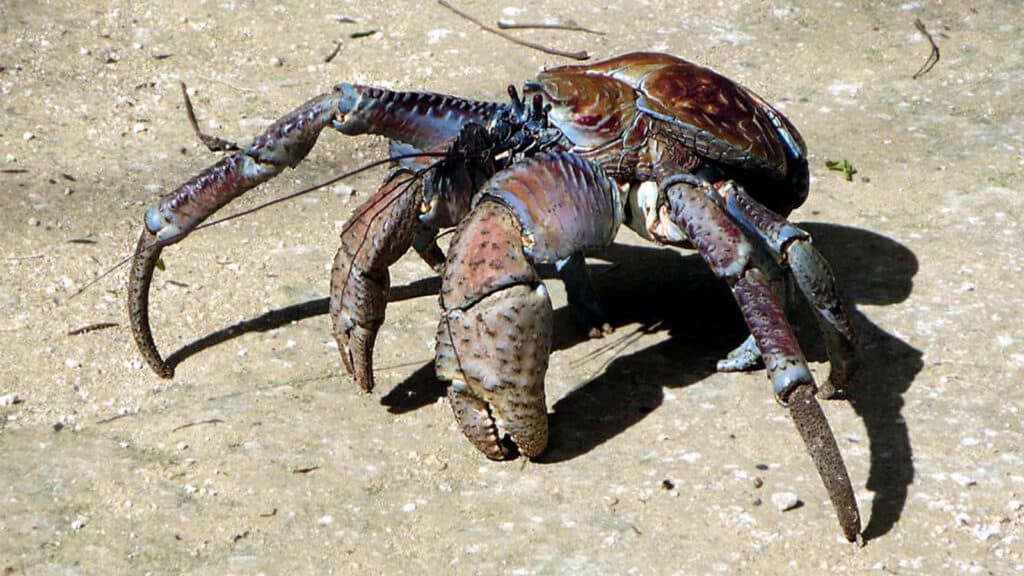 The massive coconut crab is just that: massive. These huge creatures are about 40 inches long and weigh 10 pounds, making them some of the biggest crabs on this list.

When they’re young, the nocturnal coconut crab lives in dense vegetation or piles of fallen coconuts to avoid the sun.

As they get older, the crabs usually make burrows among tree roots and logs. These damp homes keep the animals safe from the heat until they head out for food at nightfall.

As scavengers, coconut crabs eat the shells of other crabs to get their daily dose of calcium. They also enjoy fallen fruit and dead animals found near their beachfront homes. Some even eat birds!

Sadly, coconut crabs are threatened by habitat destruction and over-harvesting. The species was officially labeled “vulnerable” by the IUCN, and experts are worried about their future. As a result, these animals can be hard to find and very expensive.

Female coconut crabs usually choose to mate with males that are the same size or bigger than themselves. 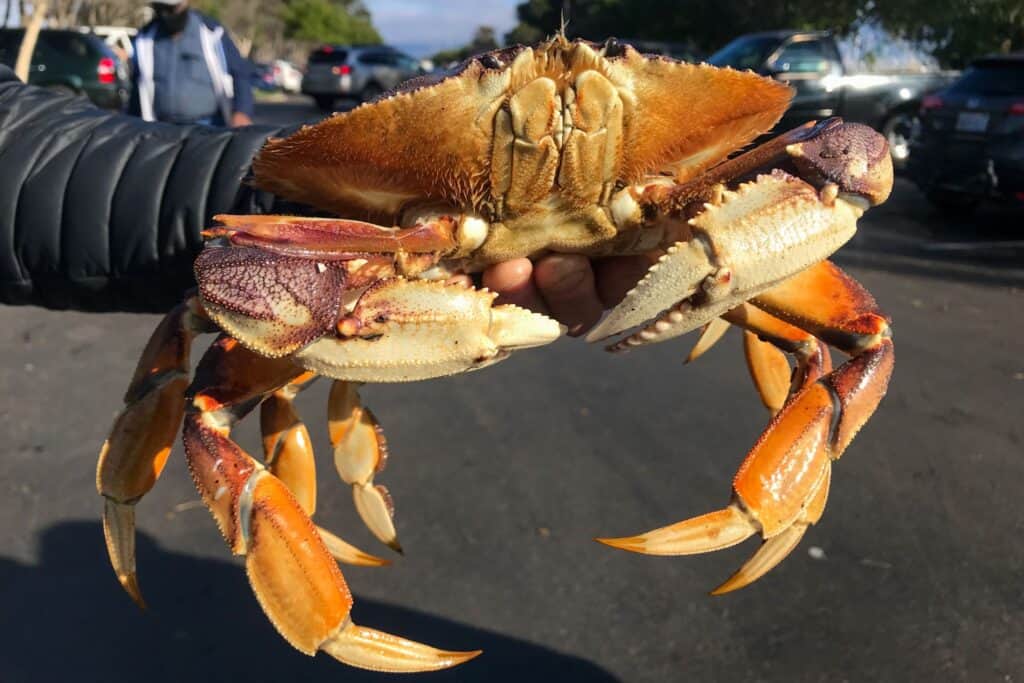 The Dungeness crab, a popular meal in the San Francisco Bay Area, is known for its mild taste and juicy texture. The variety is a common choice for crab cakes, but its steep price tag is a little hard to swallow.

Final costs depend on the crab and its seller, but you could easily spend $40 on one of these creatures. Others go for closer to $45 per pound. For a typical 2-pound crab, you’re looking at a $90 dinner.

The Dungeness crab lives along sandy ocean floors near the coast of Alaska. It can also be found down in Magdalena Bay, Mexico, and throughout California’s coastal waters. 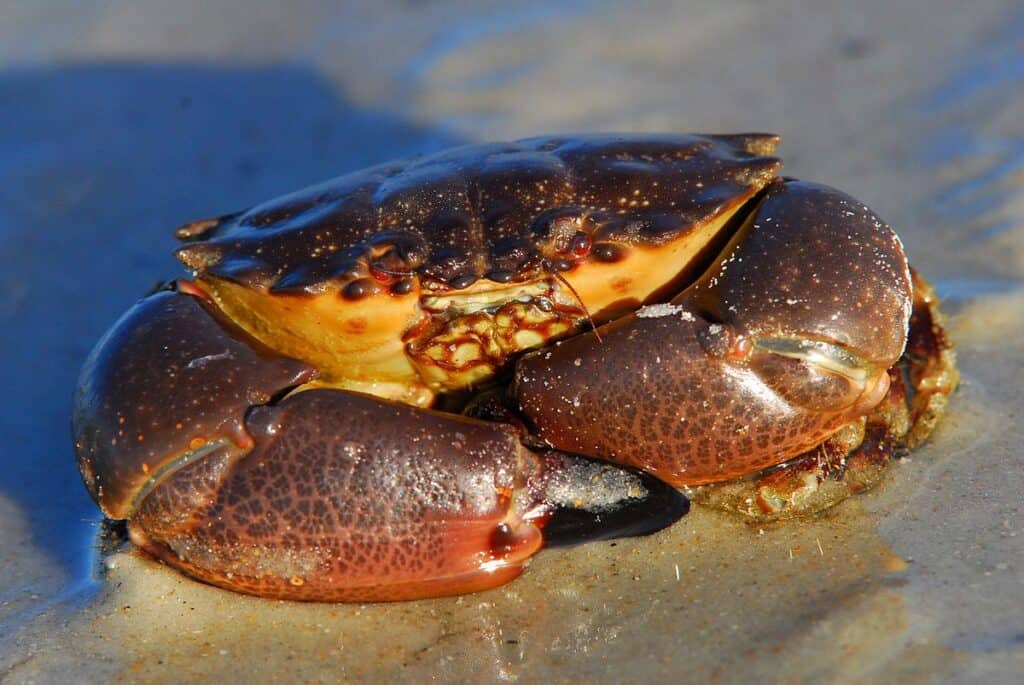 Stone crabs are often found along the coasts of North Carolina and Florida. The variety is a favorite among restaurants, many of which charge upwards of $70 for a small plate of stone crab claws.

Stone crab claw harvesting is a pretty unique process. Fishers catch the animals in underwater traps, then break off their claws and throw the rest back to the waves. Crabs can regenerate limbs, so the animal will regrow its missing claws over time.

Florida is one of the biggest producers of stone crab claws. The state regulates harvesting by requiring each claw to be at least 2 ⅞ inches long before its removed. Some scientists are concerned about claw harvesting despite this rule.

A study by the state of Florida found that as much as 82% of crabs die when both claws are removed and up to 60% die when one claw is removed. Those high death rates make some worry about sustaining healthy stone crab populations.

Stone crab claws have to be boiled and put on ice soon after removal, otherwise they go bad. 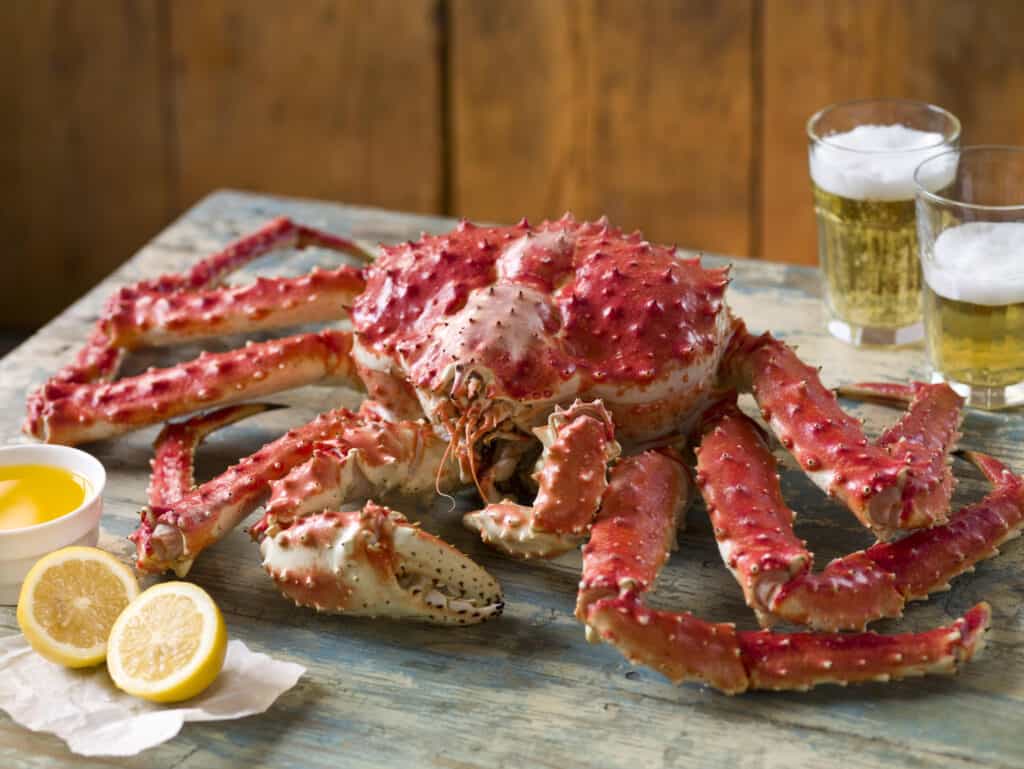 Coming in at number four is the Alaskan red king crab, a large species that can live up to about 30 years. Males can grow up to about 24 pounds and have legs up to 5 feet long.

Red king crabs live throughout the coastal waters of Japan, British Columbia, the Bering Sea, Alaska, and many other regions — but the most expensive variety comes from Alaska.

Like other crabs, this variety is omnivorous. The species enjoys a whole range of dead and decaying organisms along the ocean floor, including fish, plants, and more. 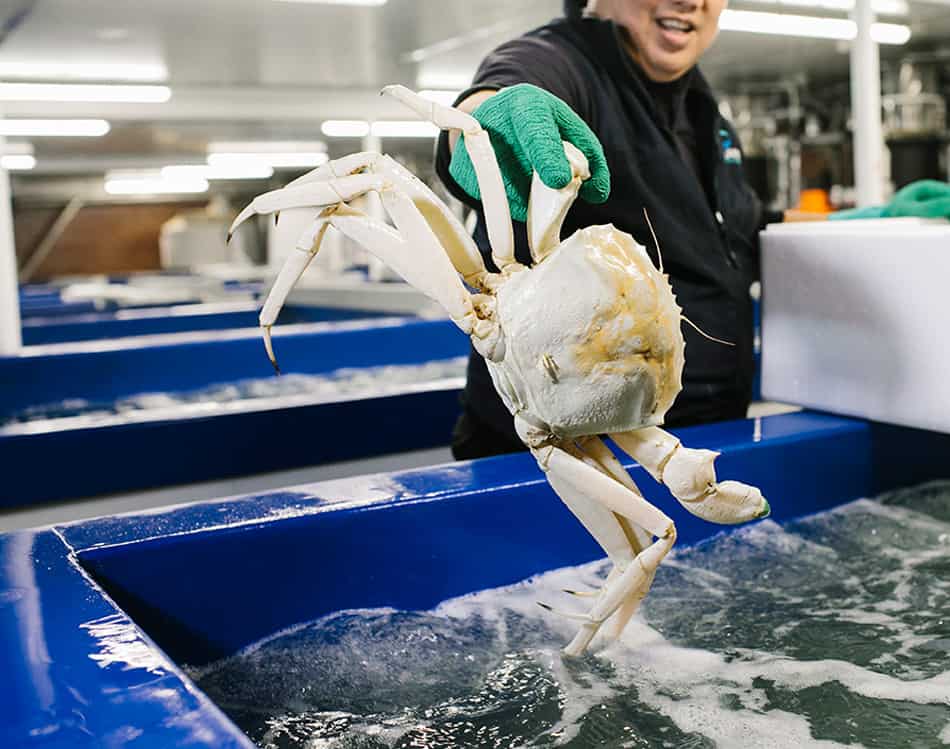 The crystal crab is one of the most popular varieties among high-end chefs. The species has a thin shell and yields large portions of meat, making it a popular choice for restaurants.

Crystal crabs only live along the western coast of Australia. As deep-sea crabs, the species can be tricky to catch, making it more expensive. Although the variety isn’t endangered, crystal crabs’ isolated population boosts prices too.

A single crystal crab can sell for as much as $300, making it the third most expensive crab on the planet.

Unlike other species, crystal crabs remain white after being cooked.

Crab Price: Up to $12,000
Scientific Name: Macrocheira kaempferi
Habitat: The seafloor near Japan
Crab Fact: These crabs live up to 100 years

The horrifyingly huge spider crab lurks along the seafloor near Japan. Living up to 100 years, the massive creature can grow legs over 12 feet long and weigh more than 40 pounds!

Despite their monster-like appearance, giant spider crabs are actually quite tame. The animal moves slowly along the ocean floor, snacking on dead organisms as it moves through the water.

Giant spider crabs aren’t commonly fished because they live so deep under the waves. Still, the creatures are a delicacy in Japan. If they aren’t eaten, the species might be preserved and presented as a unique collector’s item — like this taxidermied specimen sold in 2014. The huge creature was auctioned for about $12,000! 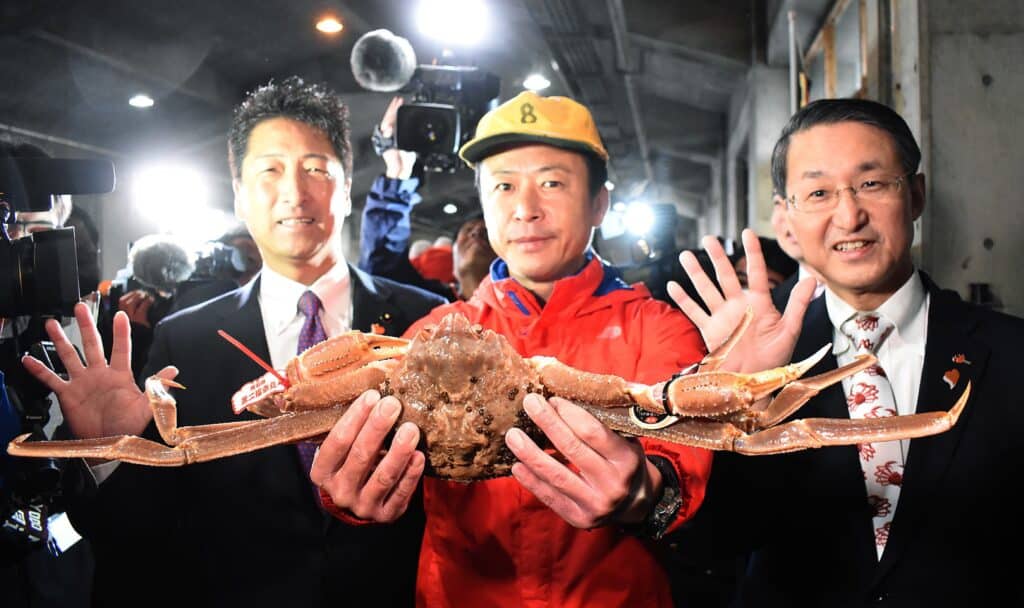 Snow crabs are the most expensive crabs.

Snow crabs are mainly found along parts of Greenland, Eastern Canada, Alaska, and Japan. You could easily spend several hundred dollars on these animals regardless of their origin, but Japanese snow crabs can be particularly expensive.

Why? In Japan, snow crab fishing season runs from November to early March. Traditionally, buying the first caught crab is a status symbol. People are willing to spend thousands to get their hands on the first crab of the season. One sold for $18,000 in 2018, while another earned a jaw-dropping $46,000 in 2019.

Snow crabs live among the muddy bottoms of cold ocean waters. The creatures feed on worms, fish, shrimp, and other small organisms.

10 Rarest Hoya Species in the World