8 Most Expensive Chicken Breeds You Can Buy

Chickens and humans have a very long history. The story starts 10,000 years ago in Asia where some of the earliest chicken-like fossils were discovered. Although it’s hard to track human interaction with chickens that far back, experts say some early chickens were farmed for cockfighting — not eating.

In the history of the American continents, some experts think that chickens were originally introduced to the New World by Polynesians who landed on the coast of South America about a century before the voyages of Columbus.

Today, chickens are commonly used for food across the world, but some unique breeds are still used for other purposes, including animal shows and decoration. Some even serve as protection for other chickens. 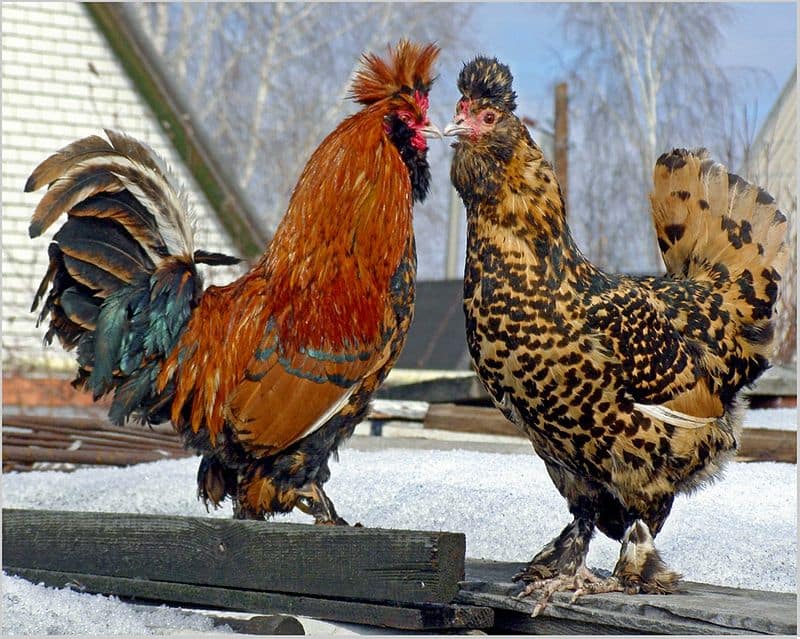 First up: Pavlovskaya chickens. These beautiful birds have a very distinct look. Beyond the crown-like feathers on their heads, the breed has feathers extending over their feet — almost like shoes.

Pavlovskaya chickens come from Russia. According to Russian folklore, the breed is the result of crossbreeding a grouse and a chicken. Another legend says the breed has royal roots dating back to the hens of Catherine the Great. In truth, Pavlovskaya chickens were first documented by a scientist named Peter Simon Pallas, who indicated that the breed was named after its birthplace in a rural locality in Russia.

Although these chickens lay medium-sized eggs, farmers say the rare breed is typically ornamental — mainly because the birds are so rare and expensive.

Prices vary depending on the seller, but many farms ask for nearly $50 per Pavlovskaya chicken.

This breed is characterized as friendly and docile. It handles cold temperatures very well, likely due to roots in cold regions of Europe. 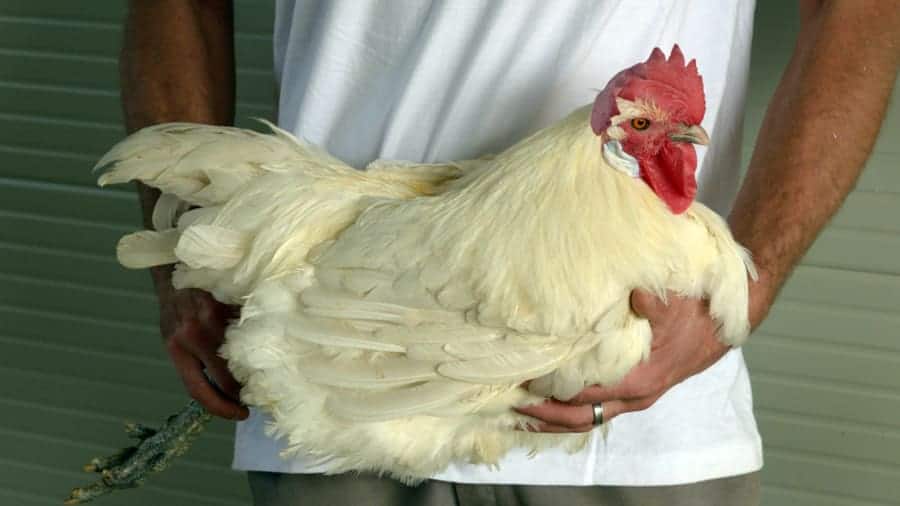 Unlike most breeds on this list, Bresse chickens are all about food. The specialty birds are bred and raised in “the Bresse area of the Rhône-Alpes region in eastern France,” hence their name. After a life filled with carefully measured food and government-regulated living conditions, the birds are turned into expensive dishes in high-end restaurants.

Although the price of live Bresse chickens varies, a kilo (approx. 2.2 pounds) of Bresse meat will cost you about $48.

Bresse chickens have to be raised in the Bresse region of eastern France to be legally called “Bresse.” Additionally, farmers have to follow specific, government-regulated rules such as only feeding the animals food grown in the same region. 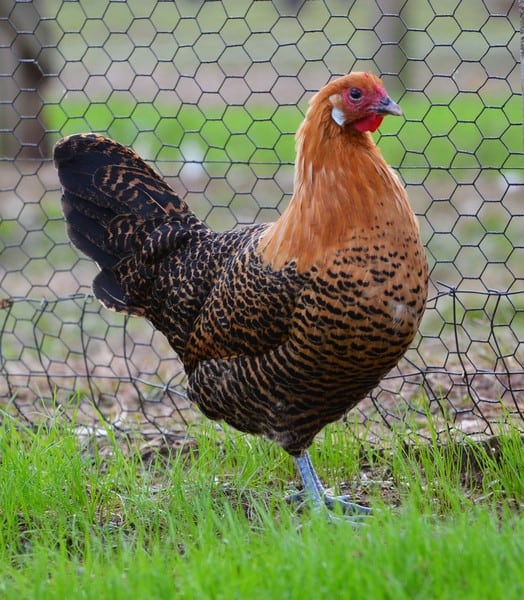 Despite their intense name, this breed is best-known for its ability to lay eggs “until the day they die.” The birds also have some stand-out feathers, though, and experts divide Deathlayers into two categories based on their color: Gold Deathlayers and Silver Deathlayers. Of the two, Gold Deathlayers are the rarest, which means they cost more. Prices vary, but be ready to spend close to $100 if you want one of these rare birds.

Gold Deathlayers come from Germany. The exact history isn’t well-documented, but some estimates say the breed has roots dating back more than 400 years.

Although they got their start in Germany, Deathlayer chickens can be purchased in the U.S. thanks to relatively recent imports of the species.

The number of Deathlayer chickens seems to be in decline. According to a farm that sells this breed, a census in Germany found the total population to be less than 2,000. 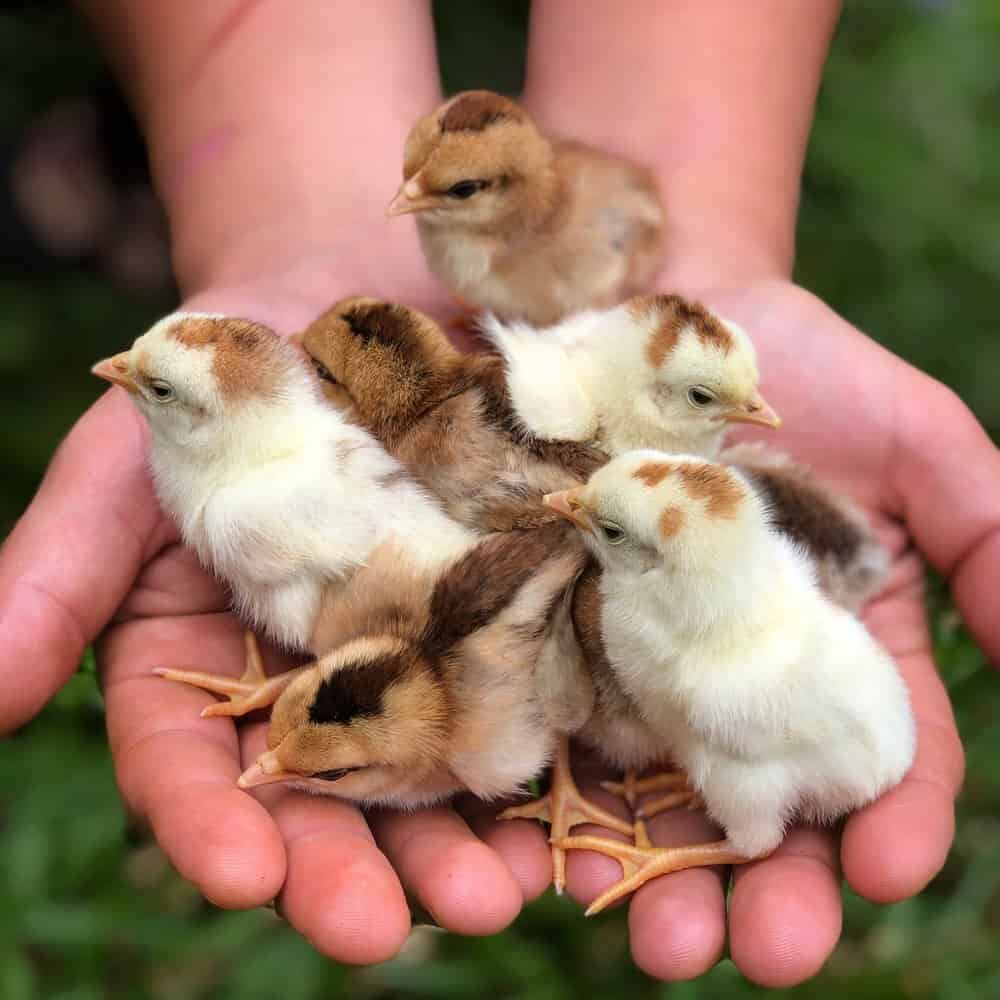 The Olandsk Dwarf chicken is a small breed originating from the second-largest Swedish island. Although you can find these little birds for sale today, the breed almost went extinct in the 1980s. At that time, estimates said as few as 50 Olandsk Dwarf chickens remained.

Beyond their small size, these birds are known for their speckled plumage. The breed often has splashes of black and white, but they also develop red, copper, and brown spots.

Although some small animals have to avoid larger creatures, these birds are pretty bold and confident. According to a farm that sells Olandsk Dwarf chickens, these birds do well alongside medium to large fowl.

Female Olandsk Dwarf chickens lay small tan eggs that often have speckles. Despite their size, these birds seem to lay quite frequently. 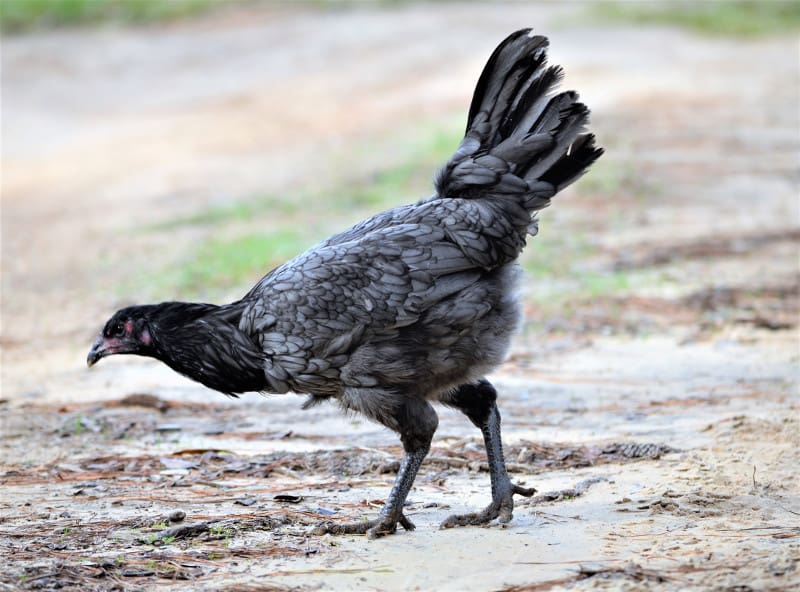 These birds were specifically bred to win fights against other breeds and defend flocks from hawk attacks. Thanks to their intimating size and shart spurs, Liege Fighter roosters live up to their name and easily fight off predators hunting among flocks.

Also called Combattant de Liège, these birds were bred in Belgium in the late 1800s to serve as competitors in cockfighting, a popular pastime of the era in which roosters would battle as people watched.

Today, Liege Fighter roosters are more commonly used to defend hens thanks to their aggressive attitude. However, all that aggression doesn’t mean farmers steer clear of these birds in the pasture. According to a farm that sells the unique animal, Liege Fighters are very friendly toward their human owners despite their aggression toward predators. 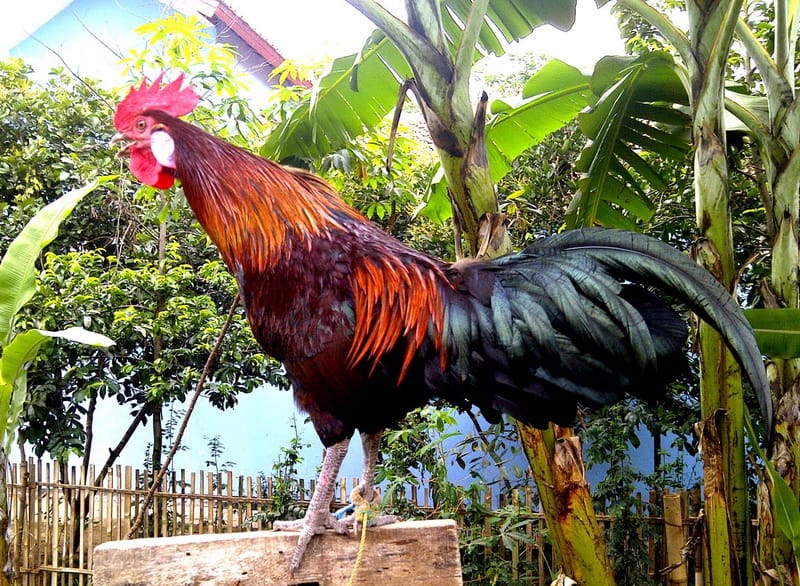 Also known as the laughing chicken, this breed is characterized by its unique ability to “laugh.” When Ayam Ketawa crow, it sounds a lot more like a person laughing than a bird.

Interestingly, Ayam Ketawa was almost exclusively owned by royalty until the fall of the Indonesian Monarchy. Now that anyone in Indonesia can own these birds, some regions hold chicken crowing contests to see which bird has the longest laughing crow.

According to a farm that raises these birds, the Ayam Ketawa chicken’s crow can go on for 15 seconds or longer.

Although these chickens feature some beautiful feathers, breeders don’t focus on developing the look of their birds since the main attraction is the animal’s “laugh.” 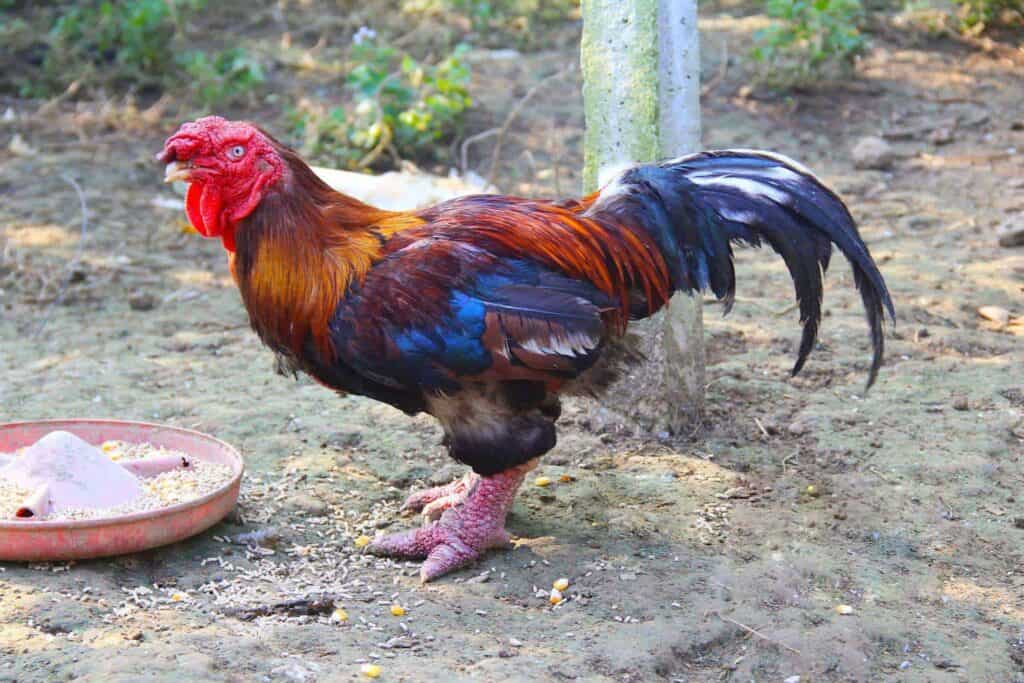 Dong Tao chickens (spelled Đông Tảo in Vietnamese) stand out with bright, shimmering feathers — but something else is going on with these birds. The unique creatures have very thick, scaly legs that almost look like a dragon’s body, earning Dong Tao chickens the nickname “dragon chicken.”

Beyond their unique look, these chickens come with a hefty price tag. Most Dong Tao chickens will cost you at least $2,000, but that price can get even higher depending on the seller.

This breed takes about eight months to reach maturity while most breeds only take 16 to 24 weeks.

Approximate Price: $2,500 per chicken
Origin: Indonesia
Unique Feature: This chicken is entirely black (even on the inside)
Alternate Name: The goth chicken 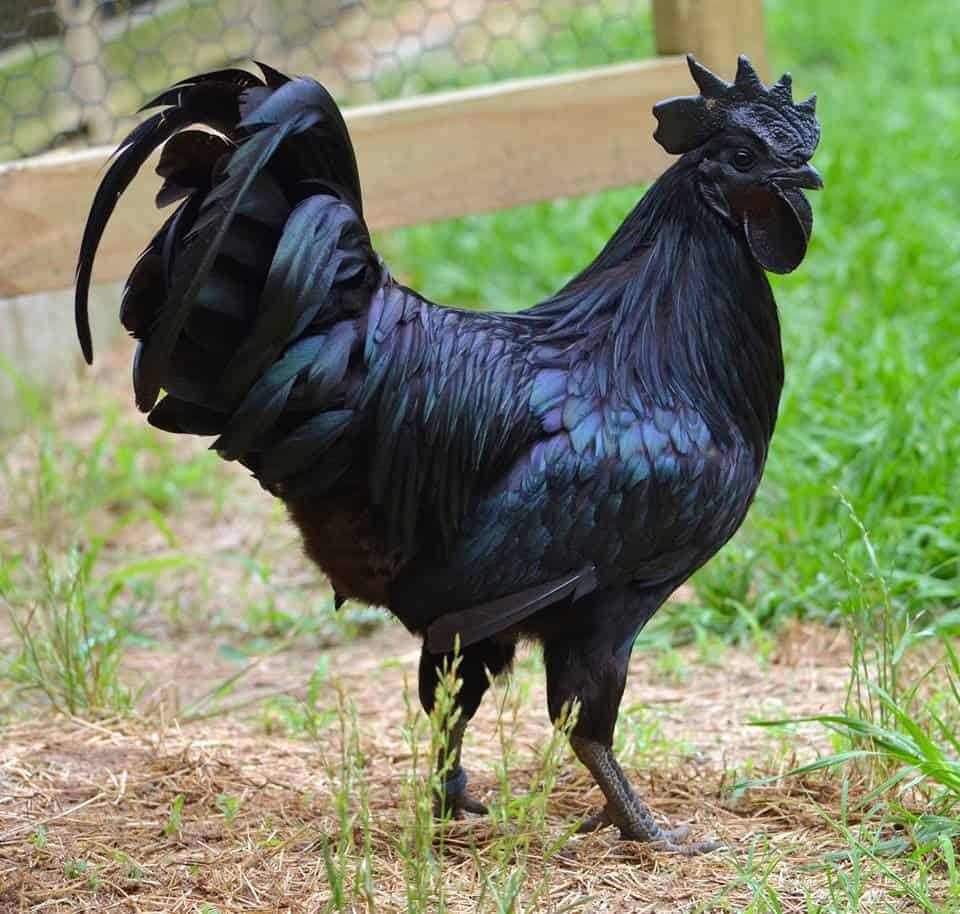 Ayam Cemani is the world’s most expensive chicken breed.

Out of all the chicken breeds in this world, Ayam Cemani is the most expensive and the most unique. The first thing you’ll notice is the bird’s entirely black body. Everything from its feathers to its eyes is black — but it doesn’t stop there. Ayam Cemani chickens have a rare genetic trait called fibromelanonis, a form of hyperpigmentation that turns the chicken jet black, like all of it. Even the animal’s bones, muscles, and eternal organs are black. Everything except its blood.

Scientists aren’t sure exactly how these chickens turned black, but some think the animal’s unique appearance is the result of breeding between jungle fowls.

Be ready to drop some serious cash if you want one of these black birds — Ayam Cemani chickens easily cost $2,500 apiece.

Ayam Cemani chickens have collected some interesting nicknames over the years, including “the goth chicken” and “the Lamborghini of poultry.”

8 Most Expensive Nerf Guns on the Market

8 Most Expensive Items in Rocket League