Jay Leno is famous for hosting The Tonight Show and his impressive car collection — but the comedian/car collector didn’t always have an empire of sports cars and comedy. In 1973, the soon-to-be star graduated from Emerson College with a bachelor’s degree in speech therapy. Leno made a quick left turn though, moving to LA and starting his career as a writer and comedian.

At the beginning of his comedy career, Leno wrote for the TV show Good Times alongside David Letterman. Both Leno and Letterman would gradually rise to fame before earning their career-defining talk shows in the ‘90s: Late Show with David Letterman and The Tonight Show with Jay Leno.

As Leno’s fame and money grew, so did his car collection. The star bought his first car in the ‘60s when he was just 14 years old, but his collection eventually expanded to nearly 300 vehicles — including some very expensive models. Leno could afford them though, the talk show host reportedly made a $30 million salary at the height of his late-night career.

Today, Leno owns a huge collection of rare and pricey sports cars. Learn more about his most expensive vehicles with this list! 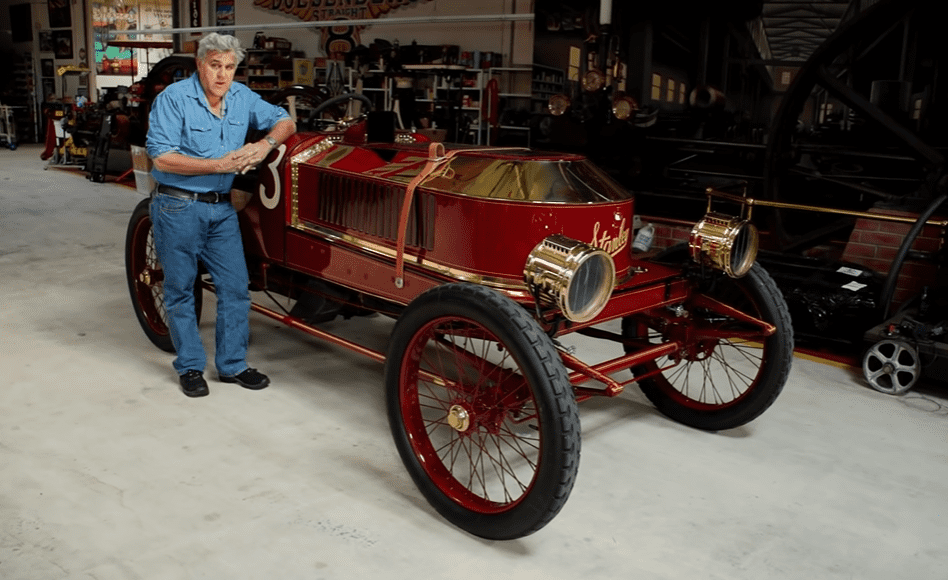 First up is Jay Leno’s 1906 Stanley Steamer built for the Vanderbilt Cup — the first major automobile race held in the U.S.

Stanley Steamer, a carmaker in Massachusetts, was commissioned to make a limited number of vehicles for the Cup’s 1906 Elimination Trial, but that never quite happened. Freelan Stanley, part of the brother duo behind Stanley Steamers, became sick and the cars weren’t ready in time.

Today, one of the too-late Stanley Steamer racers is owned by Jay Leno. Incredibly, the car actually blew up on camera during an episode of Jay Leno’s Garage, a show about the star’s car collection. Leno eventually repaired the vehicle and added a new 30-inch boiler (bigger than the older 23-incher).

The actual value of this piece of racing history is hard to pin down, but it could be worth as much as $275,000!

Before making cars, the Stanley brothers ran a photography business in Waterton, Massachusetts. 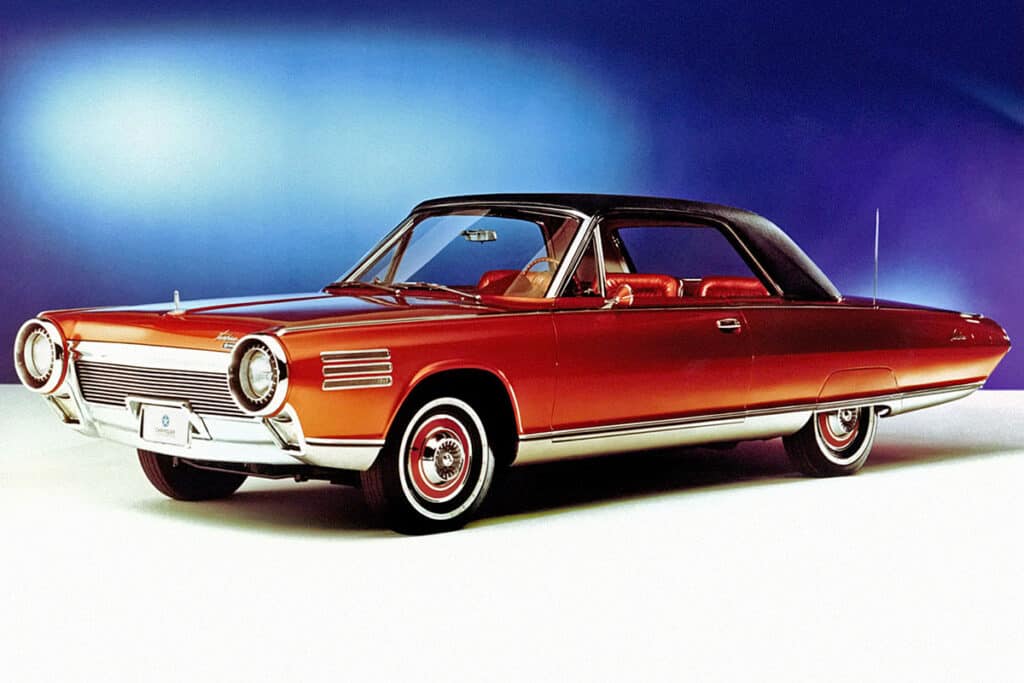 Would you drive a car powered by a jet engine? Chrysler thought you should! And they weren’t alone. During the 1950s and ‘60s, several carmakers toyed with the idea of making cars with turbine engines. GM, Rover, and even Ford considered the possibilities (Ford actually made turbine-powered engines in the early ‘70s, but there were a bunch of issues with suppliers and engineering that shut down the project).

Although turbine-powered cars never caught on, Chrysler still made 55 turbine vehicles around 1963. Most of these vehicles were given to carefully selected customers. These customers were really just test drivers. In total, 203 testers got a chance to use Chrysler’s unique design for three months each before returning the car.

Ultimately, the 1963 Chrysler Turbine was never officially released due to environmental regulations and other obstacles. Today, just nine Chrysler Turbines are left — and Jay Leno owns one of them. The rare car cost $300,000 to make back in the ‘60s, but it would almost certainly sell for way more if it ever went up for auction today.

Because of its turbine engine, this car can run on anything flammable, including everything from tequila to Chanel No. 5. 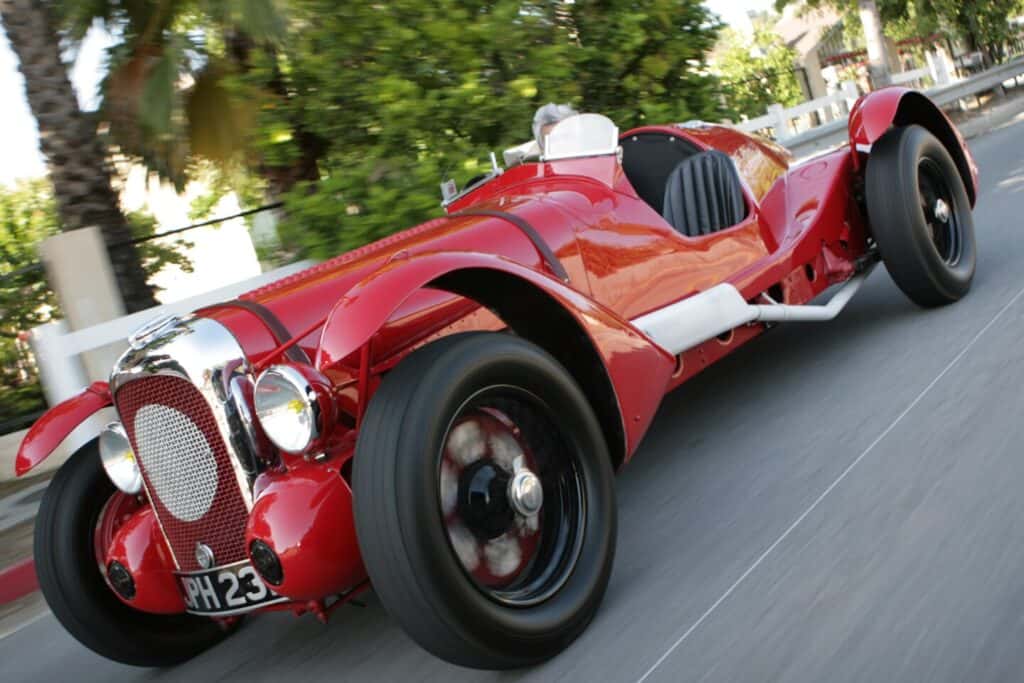 Not much is known about Jay Leno’s 1939 Lagonda V12, but some reports say the car is a replica of a Le Mans racer made by Bentley. Based on the value of other Lagonda cars from the ‘30s, this sleek vehicle might be worth up to half a million dollars.

Lagonda was a carmaker in the U.K. in the early 1900s. The company made a limited number of vehicles, including the Drophead Coupe. Lagonda also made a car called Rapide, and one owner says only 12 were ever completed.

Lagonda was purchased by Aston Martin in the late 1940s. A few special edition Lagondas have been made since then, but the brand has essentially shut its doors and been fully absorbed by its buyer. 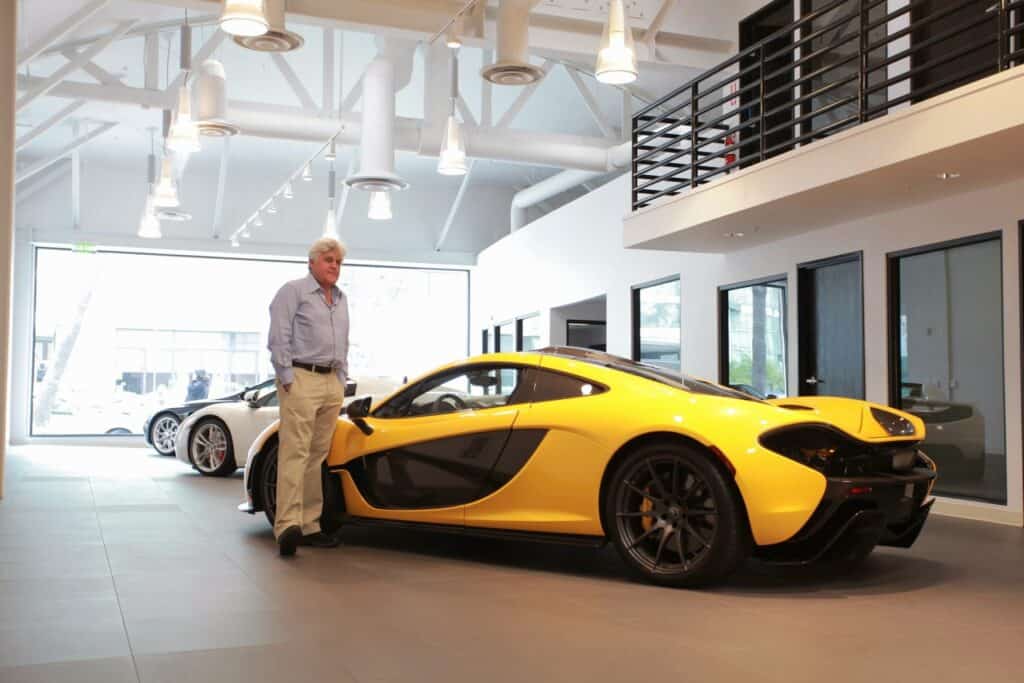 After making the F1, McLaren targeted wealthy buyers with another expensive, limited-edition car: the P1. The costly vehicle features a hybrid design, combining a 3.8-liter twin-turbo V8 and a powerful battery pack. The sports car’s impressive specs shoot it from 0 to 60 mph in less than three seconds before maxing out at 217.5 mph, making this one of the fastest cars on this list.

Like the F1, very few P1s were made. McLaren says 375 units were crafted, including the one Leno owns. Each P1 is worth $1.2 million — but there’s a good chance that the price will climb higher as time goes on.

Former McLaren CEO Mike Flewitt told Leno that the decision to make exactly 375 P1s wasn’t a “perfect science.” Instead, the company landed on the number after considering how many people wanted one while keeping in mind the brand’s goal of making an exclusive car. 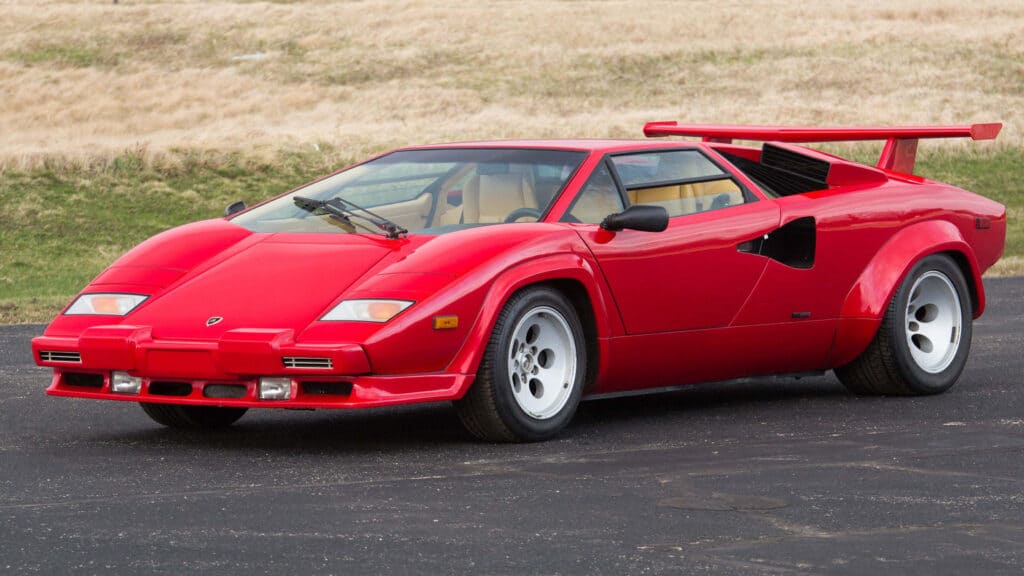 “[The Lamborghini Countach] is the classic car of the eighties,” says Jay Leno, “I think every guy that’s in his early forties or late thirties probably had a poster of this hanging on his bedroom wall.”

It’s not hard to agree with Leno here, it seems like the car was everywhere back then. Leno showed his wall dedicated to Countach memorabilia during an episode of Jay Leno’s Garage, and there were dozens of magazines featuring the vehicle on their covers.

One copy of Motor Trend from the era features the headline “Countach Races Chopper!,” but Leno says “no Countach ever hit 200 miles an hour.” According to the collector, the car’s aerodynamic appearance is a little misleading. “It’s really like a brick,” Leno says, but he still loves the car. He even used it as his everyday driver for a while.

Lamborghini only has two factories in the whole world, and both are found in Italy. 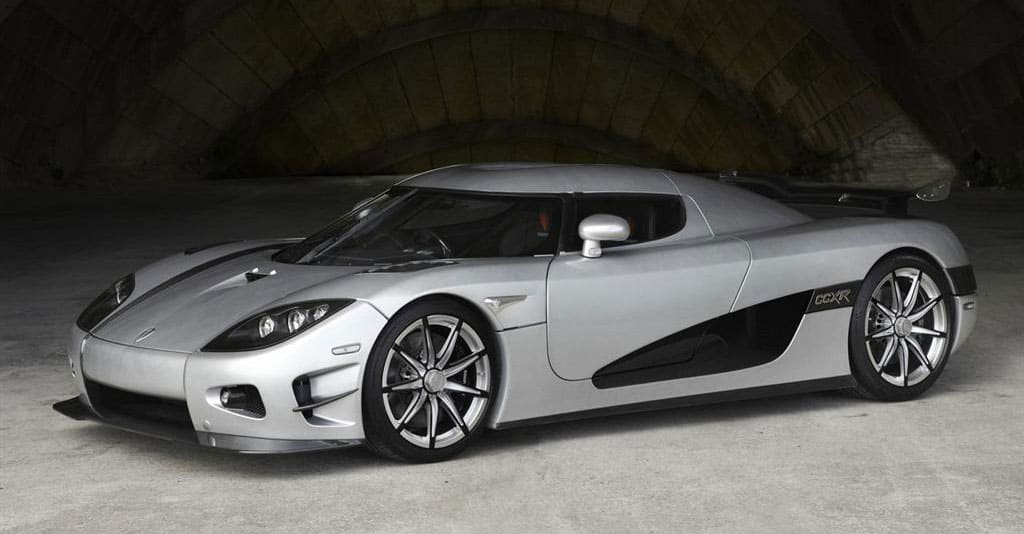 At number three is the ultra-rare Koenigsegg CCXR Trevita, a $2.6 million vehicle packed with power. Only two units were ever created, and one is owned by Jay Leno. The other was once owned by Floyd Mayweather before it went up for auction in 2017.

Why were just two made? Because the car is so complex and unique. The vehicle’s most stand-out feature is its unique carbon-fiber body that was specially treated to shimmer a silvery-white. The car’s insane power makes it a complex build too — it’s actually one of the fastest cars in the world, reaching 254 mph.

This car was made in Sweden. In Swedish, Trevita means “three whites.” The maker decided on the name because they originally planned to make three examples of this supercar, but the complex creation process held them back. 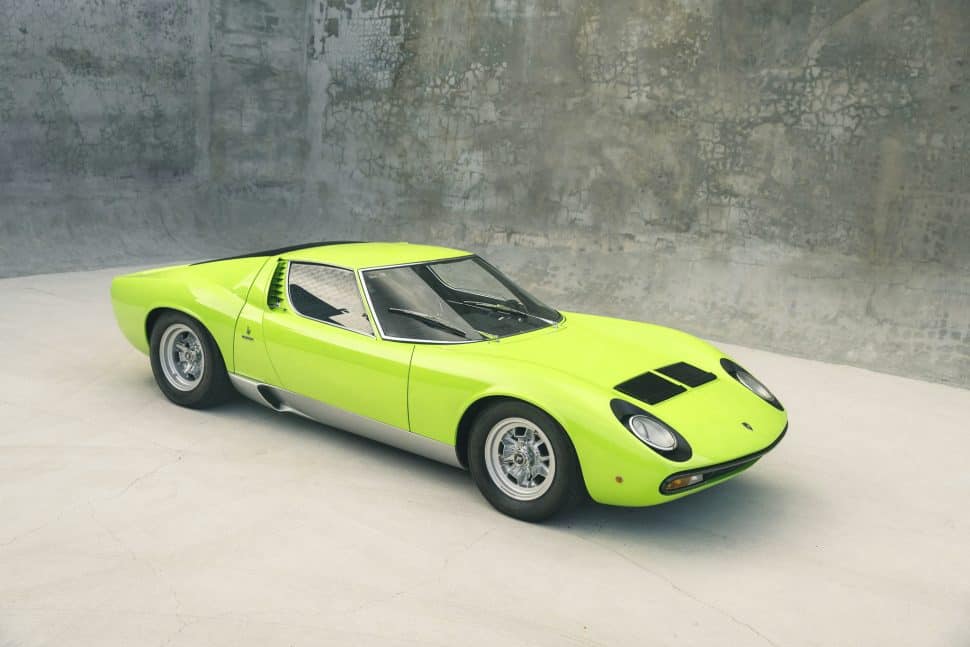 The 1967 Lamborghini Miura P400 wasn’t going to be a widely released car, but it ended up joining the market when the inventor realized how many people wanted one.

Jay Leno’s example of the P400 was once owned by Dean Martin. Martin gave the car to his son, who ended up damaging the motor. Eventually, a friend of Leno received the vehicle, then gave it to Leno. Finally, the car was brought back to life when Leno repaired the engine.

Today, rare examples of early P400s can sell for more than $4 million. Leno says his P400 was among the first hundred or so ever produced, so it’s likely worth millions.

P400s are known for their thin chassis. 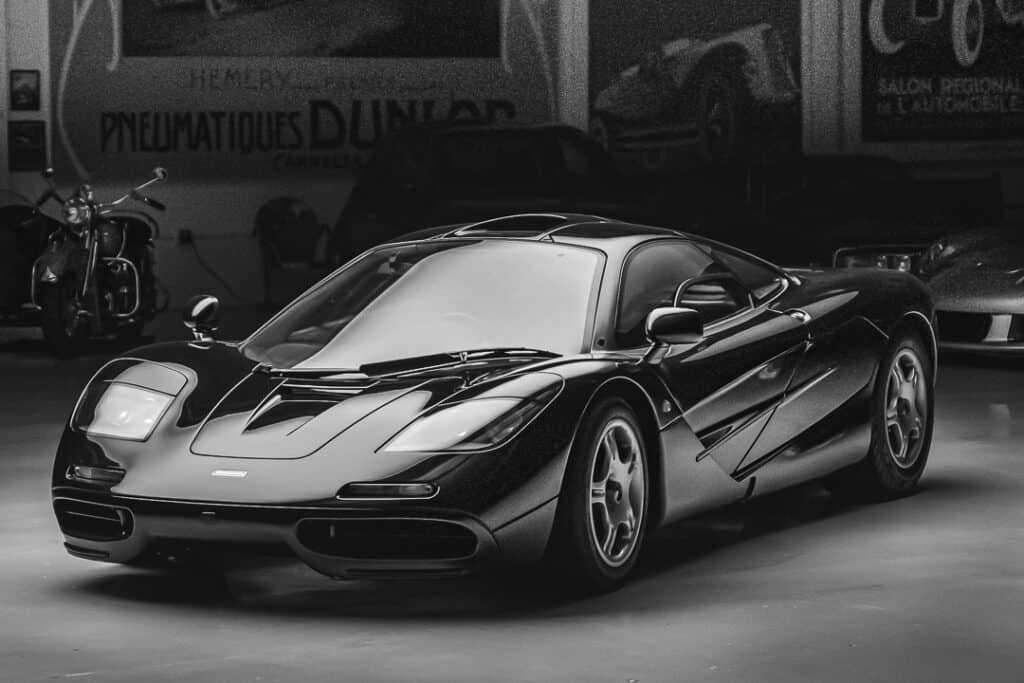 The most expensive car owned by Jay Leno is the McLaren F1.

At $12 million, Jay Leno’s McLaren F1 is by far the most expensive car in his collection. The former talk show host and comedian paid just $800,000 for the vehicle back in the ‘90s, which seems like a steal today.

Why’s this car so pricey? Only 106 McLaren F1s were made, so these vehicles are extremely rare. The car is also decked out with some powerful features, including V12 that made it the fastest car in the world when it came out.

Unlike other sports cars, McLaren F1 drivers sit in the middle of the vehicle, just like professional racers.

9 Most Expensive Toothbrushes Ever