8 Most Expensive Cowboy Hats in the World

Cowboy hats were made to protect ranchers from the sun. The design’s wide brim kept the blistering heat off their heads as they managed herds of cattle and worked on farms, but the style eventually became an iconic part of the American West in general.

Stetson is probably the most famous name in cowboy hats. The company was founded by John B. Stetson, the son of a hatmaker. Stetson moved out west after getting diagnosed with tuberculosis because his doctor thought it might help his condition. Thankfully, his health improved and he moved back to the east where he started a small hat-making business.

Stetson’s business originally focused on popular modern styles of the 1800s but eventually transitioned to a more unique design. As you probably guessed, the hat looked a lot like those worn by the classic American cowboy.

Today, cowboy hats have a huge price range — and some are crazy expensive. Keep reading to learn more about the most expensive cowboy hats in the world! 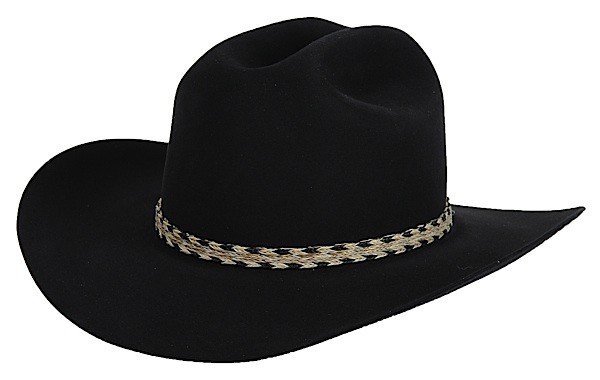 Kicking off our list of the most expensive cowboy hats is the AzTex Classic. The design features a horsehair band on the exterior and a 3 ½ inch or 4-inch brim. You’ve also got a range of color options, including bone, sand, chocolate, and many more.

The hat can be purchased with a standard fit, but AzTex Hat Company also offers custom hats.

If you want a custom hat, the company says you’ll get started by having your head measured by a machine called the Conformateur. The device was made in France during the 1800s to create ultra-precise hat sizing. The machine also gets an accurate map of a person’s head shape, not just the size.

AzTex uses these measurements to make a hat based on your preferred materials, color, and design.

Overall, the AzTex Classic sells for more than a grand.

According to one seller, Conformateurs in working condition are a rare find. The fact that AzTex uses one is pretty unique. 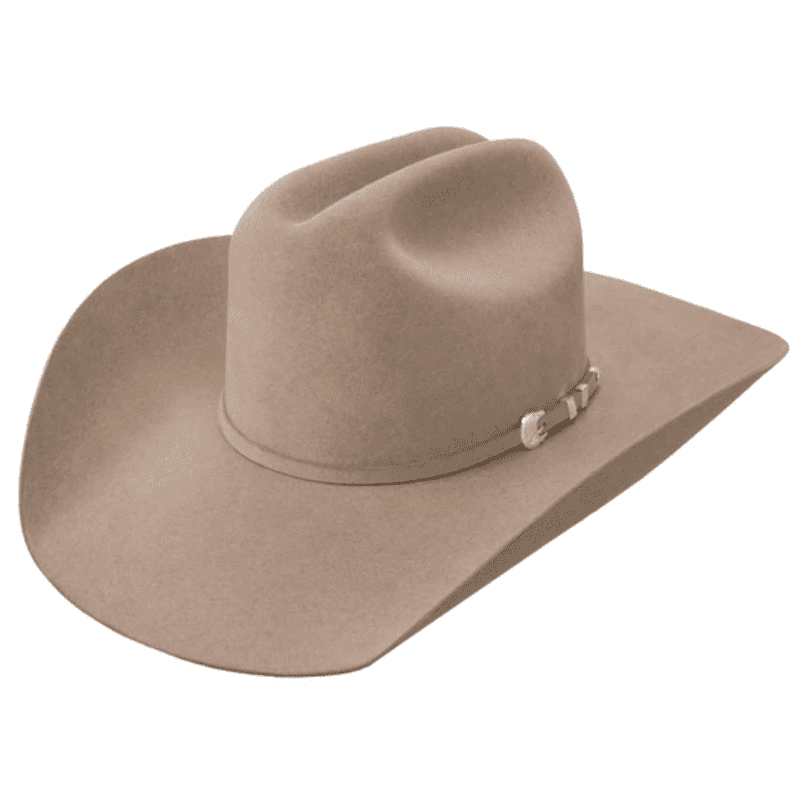 Resistol Pure is a classic cowboy hat with high-end touches. It all starts with carefully selected beaver pelts. The company’s hatters examine the belly fur, then choose pieces that are ideal for hatmaking. Next, Resistol begins the slow, careful crafting process.

Each hat is made to order, so the brand considers each buyer’s size preferences and color choices throughout this stage.

When the hat itself is ready, Resistol tops things off with sterling silver buckles at the base of the crown. The whole design costs more than $1,000 and takes up to 10 weeks to complete.

Resistol says each Pure is made in the U.S. and comes with a special carrying case. That case is really important because leather cowboy hats are hard to clean. One cowboy hat maker even says leather hats can’t be cleaned and should simply be replaced when they get too grimy. Some hats can be maintained with special cleaners, so there are definitely ways to make your cowboy hat last longer.

Resistol hats are handmade in Texas. 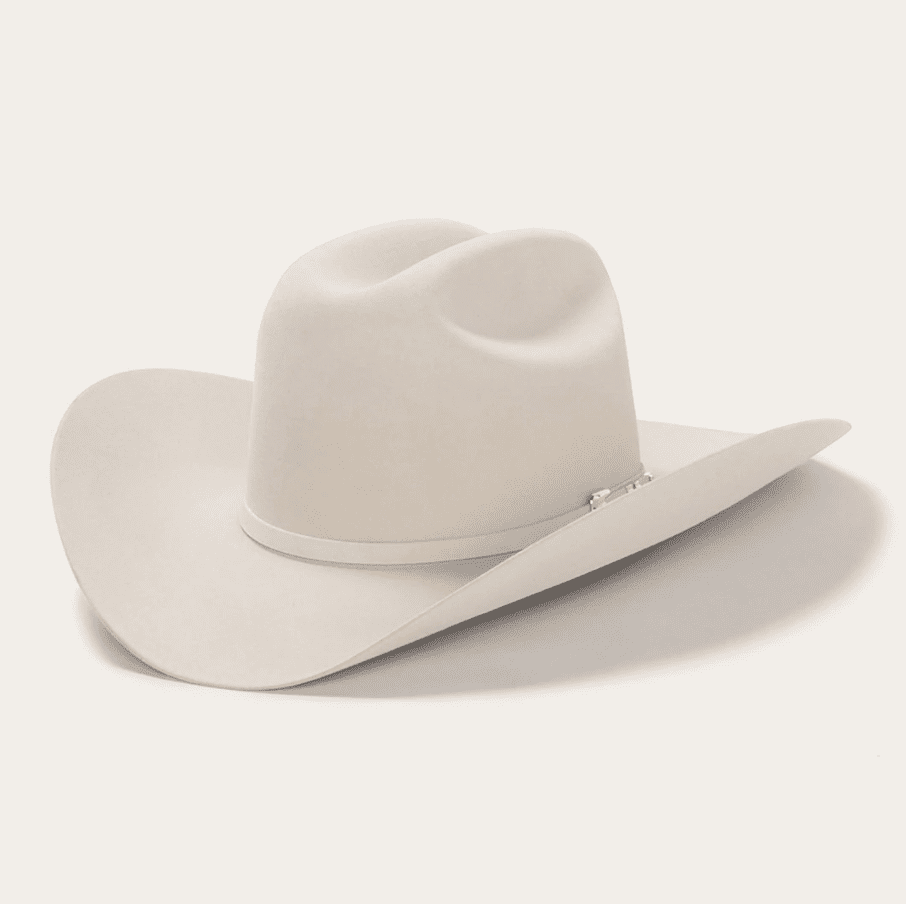 If you’re a cowboy hat fan, you probably own Stetson or want to own a Stetson. The master brand makes a huge range of styles, but its most expensive designs sell for upwards of $5,000.

Stetson uses a blend of pricey and rare furs to build cowboy hats. These materials come together to make a durable and water-resistant hat that lasts for a lifetime. The company still uses a traditional technique to turn fur into felt, but they keep a modern edge with touches of gold and real diamonds along the crown.

Although Stetson’s are a symbol of Texas today, the hats were originally made in Pennsylvania. Stetson hats got popular beyond the Keystone State thanks to their durability, and now they’re famous across the globe.

The founder of Stetson borrowed $60 from his sister to rent a workshop where he made the company’s first hats. 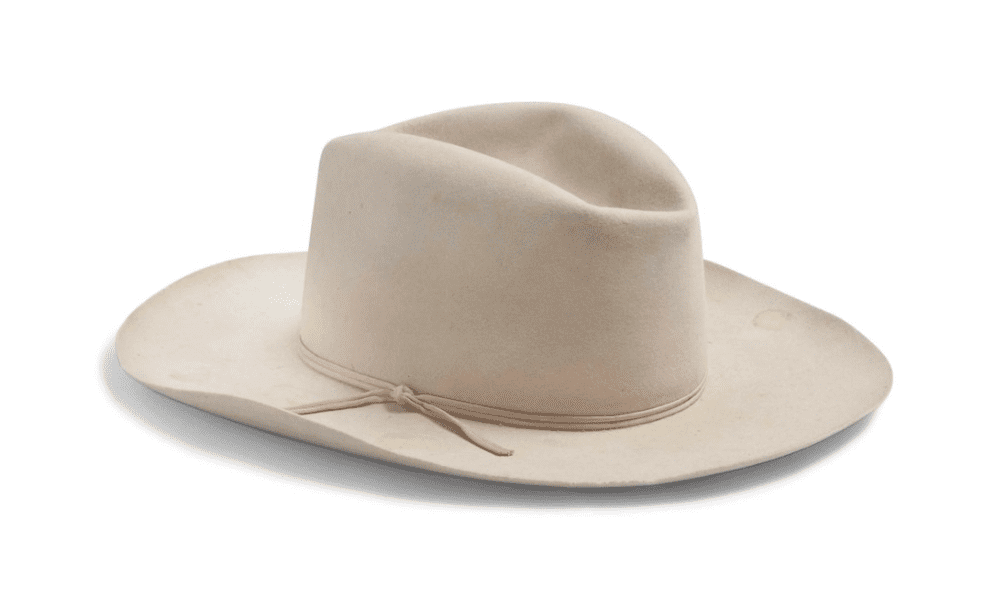 As prime minister, Winston Churchill led the U.K. through WWII and fundamentally shaped the Allied response that defeated Hitler.

As a major public figure, Churchill had plenty of international friendships and diplomatic relationships. At some point, his connection to the city of Calgary in Canada resulted in the gift of a cowboy hat. It’s not clear exactly when Churchill received the gift, but a personalized stamp in the hat reads “PRESENTED BY/ CITY OF CALGARY’, ‘CHURCHILL.”

In 2016, Christie’s auction house sold Churchill’s historic cowboy hat for about $10,000. The expensive piece of history was designed by Stetson and stands as the fifth-most expensive cowboy hat in the world. 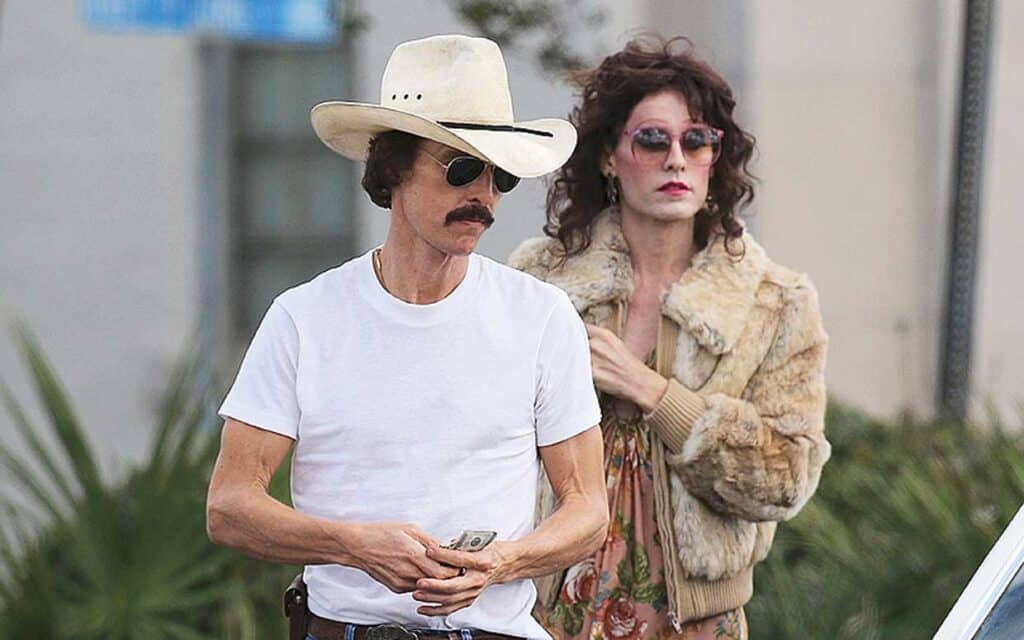 In the film “Dallas Buyers Club,” Mathew McConaughey’s character wears a Resistol cowboy hat. The actor went on to win an Oscar for his role in the movie.

After filming was done, McConaughey signed the cowboy hat alongside a note, saying, “just keep living.” The hat went up for auction in 2014, about a year after the movie was released, and ended up selling for nearly $13,000. The hat was accompanied by a certificate of authenticity from Universal Pictures.

Jared Leto, who starred alongside McConaughey, won an academy award for his performance in “Dallas Buyers Club.” 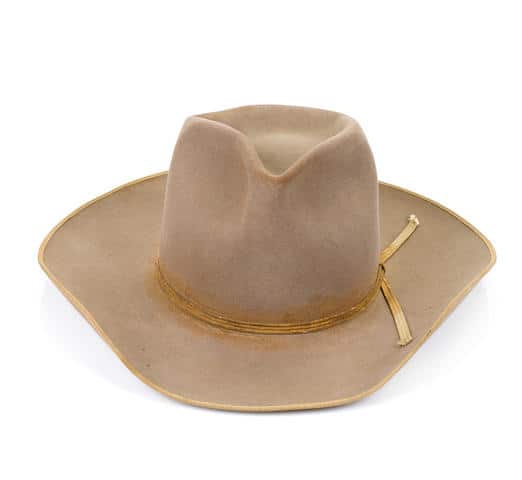 John Wayne is pretty much synonymous with cowboys. The actor was born in 1907 and went on to star as the gunslinging horse-riding icon of American westerns.

Although he was acting for years before the war, Wayne’s image as an American cowboy was formed after WWII when he starred in films like “The Searchers.” Wayne starred in non-western films too, but the actor’s most recognizable look includes a cowboy hat and a saddled-up horse.

In 2013, one of Wayne’s most famous cowboy hats was sold at an auction held by Bonhams. The hat, a leather and felt design, can be seen in six of the actor’s movies, including “The Undefeated” and “The Sons of Katie Elder.” The hat is inscribed with Wayne’s name and the misspelled title of a Wayne film (“The Comancheros” was spelled without an A).

John Wayne died at the age of 72 in 1979. By the time of his death, the actor had filmed more than 100 movies and won the Presidential Medal of Freedom. 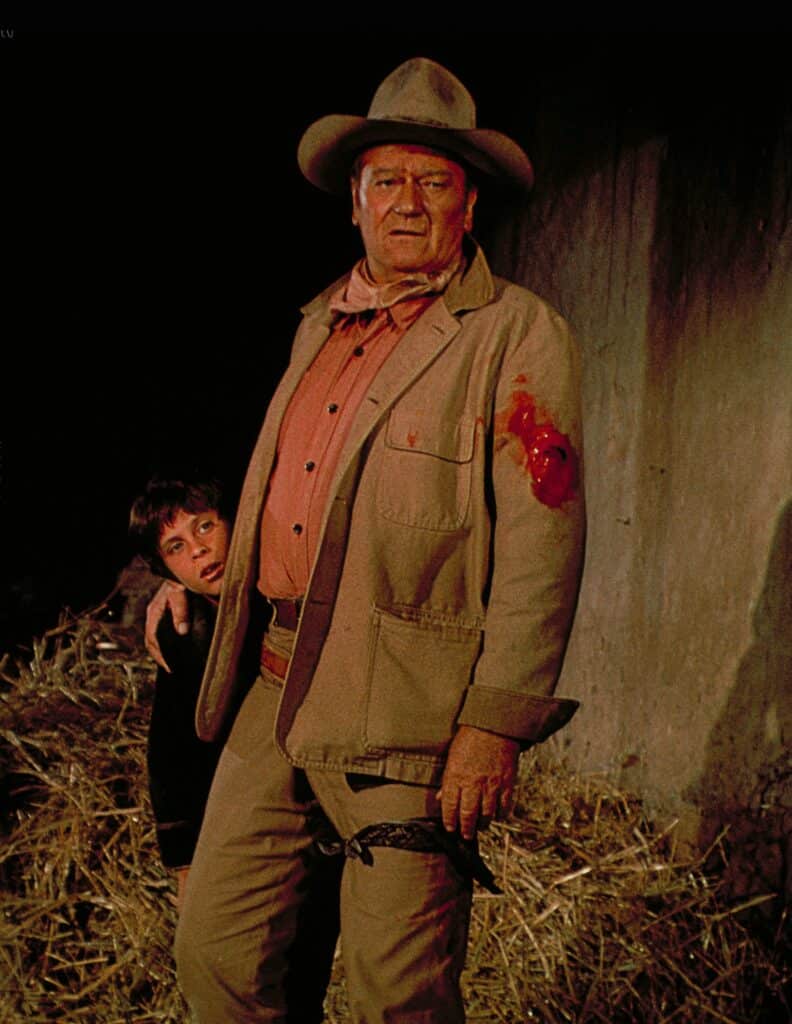 John Wayne was born in Michigan before his family moved to California. The actor was a football star in high school, which ended up earning him a scholarship to the University of Southern California. Wayne dropped out of school just two years into his degree and began working in movie studios.

In the world of Hollywood, Wayne soon landed a few small acting roles that set him up for his iconic career — including his starring role in the movie “Big Jake.”

Not much is known about John Wayne’s cowboy hat from “Big Jake,” but the hat is crazy-expensive nonetheless. In 2011, an auction selling a variety of John Wayne memorabilia sold the costume piece for a whopping $119,500. Reports aren’t sure what the hat is made of or even what brand created it, but it’s still one of the most expensive and most iconic cowboy hats of all time. 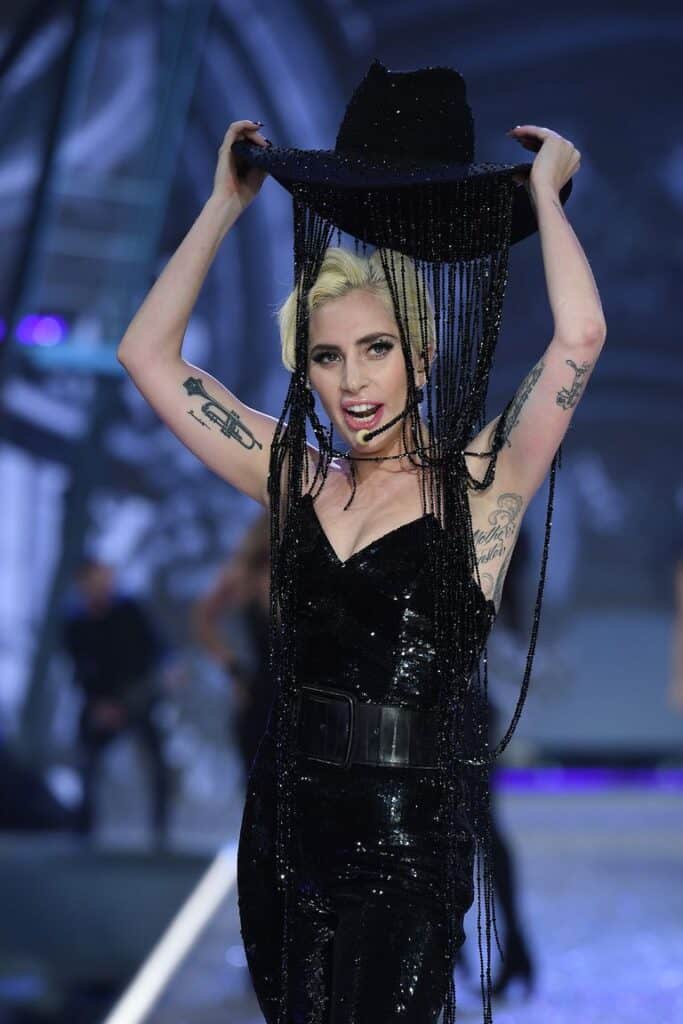 Lady Gaga is famous for her wild outfits, so it makes sense that she’d own a million-dollar hat. The Swarovski-coated design features beaded streamers that hang down from the brim and more than 45,000 individual crystals.

The hat was designed by Gladys Tamez Millinery in collaboration with Swarovski and was worn by Gaga when she performed at the Victoria’s Secret Fashion Show in 2016. Would you wear something like this?

This one-of-a-kind cowboy hat took a team of 10 experts more than 300 hours to create.

11 Rarest Ore in Minecraft Ever

8 Rarest and Most Expensive Cassette Tapes Ever