8 Most Expensive U.S. Coins in Existence

The Coinage Act of 1792, also known as the Mint Act, established the new nation’s ability to mint its own currency, signed by President George Washington himself. The new American dollars were comparable in value to the Spanish silver dollar on which they were based. Nowadays, the most expensive U.S. coins are also the most expensive coins ever sold in the world.

Continue reading to learn about the 8 most expensive U.S. coins in existence, including their histories and unique qualities.

It may seem strange, but despite being over a century old, this 1913 Liberty Head nickel is actually the second-newest coin on this list. It was a five-cent coin that was limited in production, so much so that one of these coins sold for $100,000 in 1972, making it the most valuable single coin at that time. Another later sold for over $1 million, breaking the record again, and then continued to sell for more until pulling in $3.7 million at a private auction in 2010.

The U.S. Mint introduced the Indian Head nickel in 1913 to replace the Liberty Head nickels. Though official records do not list any Liberty nickels dating from 1913, 5 were privately minted by Samuel Brown, an employee of the U.S. Mint at the time. These 5 coins are now extremely valuable. 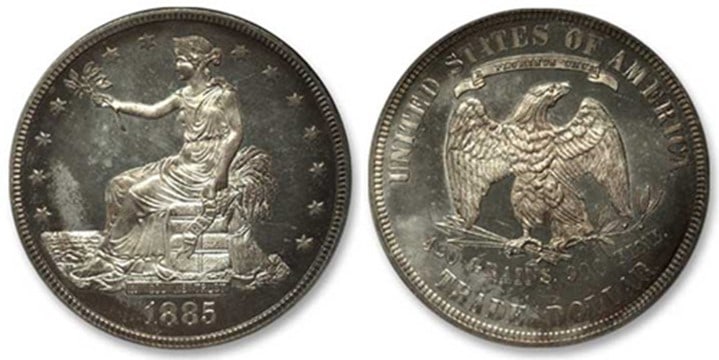 The 1885 Trade dollar was made in the wake of declining silver resources. Congress made trade dollars legal up to five dollars. They were designed to be sent to Asia, particularly China, to be collected and used as verified U.S. currency over there beginning in 1873. However, in American commerce, these coins were not valued at even a dollar and were demonetized in 1876.

The coins featured designs of a seated Liberty holding an olive branch. An example dated 1885 sold for $3.96 million in January 2019.

You may have noticed that 1885 is after these coins stopped being minted. It was later discovered that the Mint produced 10 additional coins dated 1884 and 5 more dated 1885, though no one knows exactly when. These are the truly valuable ones. 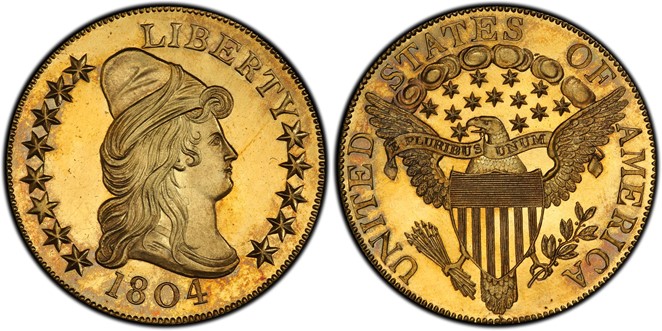 The $10 Proof Eagle was minted between 1792 to 1933, making it one of the longest-running coins for the new nation. The eagle was the largest of them, minted from gold until transitioning to silver in 1834.

A coin graded as PR64+PCGS sold for over $5 million in January 2021 through a Heritage Auctions event. It was previously sold for $2,000,000 to Albanese Rare Coins.

The production of these coins was impacted by Executive Order 6102, which was signed by FDR on April 5, 1933. This act restricted people from hoarding gold coins and certificates as part of the Emergency Banking Act’s wealth changes during the Depression. However, Gerald Ford later repealed it in 1974, re-legalizing private ownership of gold certificates, coins, and bars. 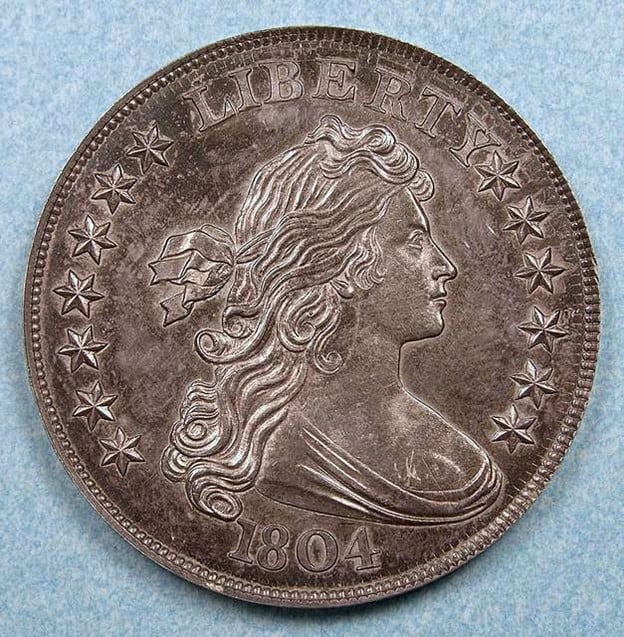 The Draped Bust Dollar is a classic of early American minting, dating back to 1795, which was around the time of the very first American coins. The first was the Flowing Hair dollar (see below) and was replaced by this one, which was minted until 1803. It was then reproduced in other editions up to the 1850s.

Due to silver shortages, these coins were produced less as time went on, though 42,000 Draped Bust dollars were known to be minted. It isn’t known who designed or posed for the Draped Bust Dollar, but some believe that Liberty was impersonated by the American socialite, Ann Willing Bingham. One of these coins dated 1804 sold for $7.68 million in August 2021.

The 1804 dollars were actually minted in 1834 as presentation coins. Unknown to the coiner, however, the actual 1804 coins had all been dated as 1803. This means that the presentation coins dated 1804 are the only ones that exist, making the 8 that survive some of the rarest coins in the world. 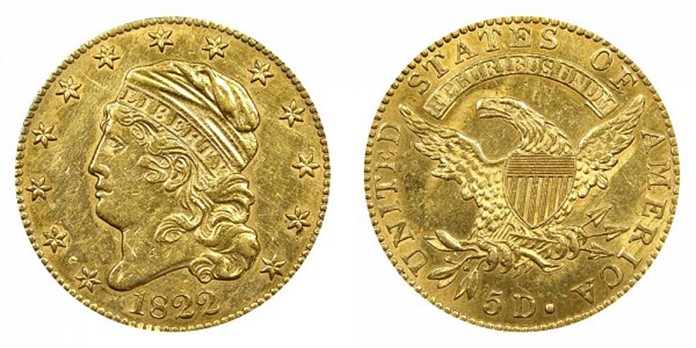 One of the longest-running U.S. coins on this list, the Half Eagle was minted from 1795 to 1929. There was also a commemorative version of it made in 1983. This five-dollar coin is solid gold, making it the first gold coin officially minted by the United States.

The coin is better known by the Draped Bust design it acquired starting in 1807 and the Liberty Head in its 1839 redesign. However, between these, an edition known as the Capped Head Half Eagle was minted from 1813 to 1834. It was this version that produced an 1822 specimen that sold for $8.4 million at a March 2021 Stacks Bowers auction.

The Coinage Act of 1792 established the U.S. dollar as the standard unit of money in this country. It also made the silver dollar official and comparable in value to the Spanish silver dollar. A few short years later, it made this gold Half Eagle coin possible. 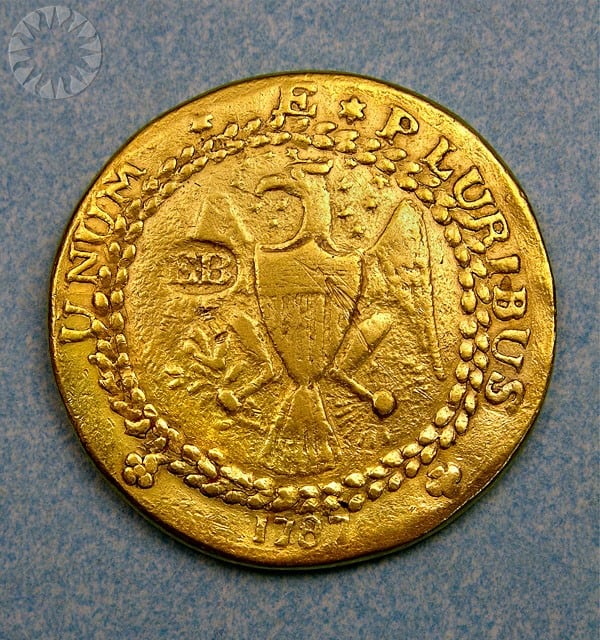 The Brasher Doubloon is a rare American doubloon, made in an interesting period in American history where the newly formed United States was using currency based on Spanish doubloons. This $16 coin is a doubloon of 8 escudos, minted privately in 1787 (there was no national mint yet).

Several instances of these doubloons exist, such as the Lima Style Doubloon, but none are as iconic or valuable as the Brasher Doubloon. In its lifespan, it has broken the record for the most valuable U.S. coin several times, selling once for $7.4 million and then in January 2021 for $9.36 million at a Heritage Auctions event.

The goldsmith Ephraim Brasher made this coin privately after being denied permission to mint copper coins for the state of New York. He was a highly valued coin maker in early America and created this coin with a unique mix of American and Spanish symbols. 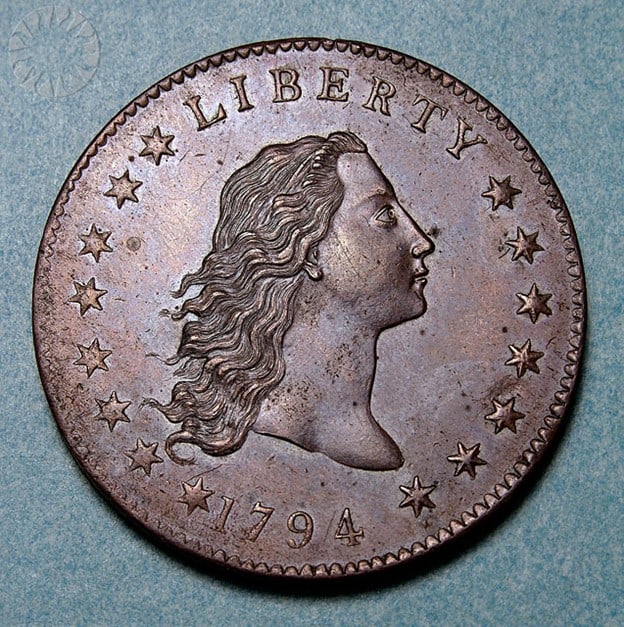 The Flowing Hair Dollar was minted in 1794-1795. It’s a significant coin from a historical perspective because it’s the first dollar coin ever issued by the new U.S. government, based on Alexander Hamilton’s proposal for a national mint. George Washington oversaw Congress’s officiation of the mint through the Coinage Act of 1792, which started minting silver and gold coins two years later.

The Flowing Hair Dollar was the first of these coins minted and is now extremely rare. It is estimated that 120 or fewer of these coins survive. The Flowing Hair Dollar listed here is the earliest and most high-quality known, selling for $10,016,875 at a Stack’s Bowers Galleries auction in January 2013. The same coin had already sold at previous auctions for $7.85 million in 2010. 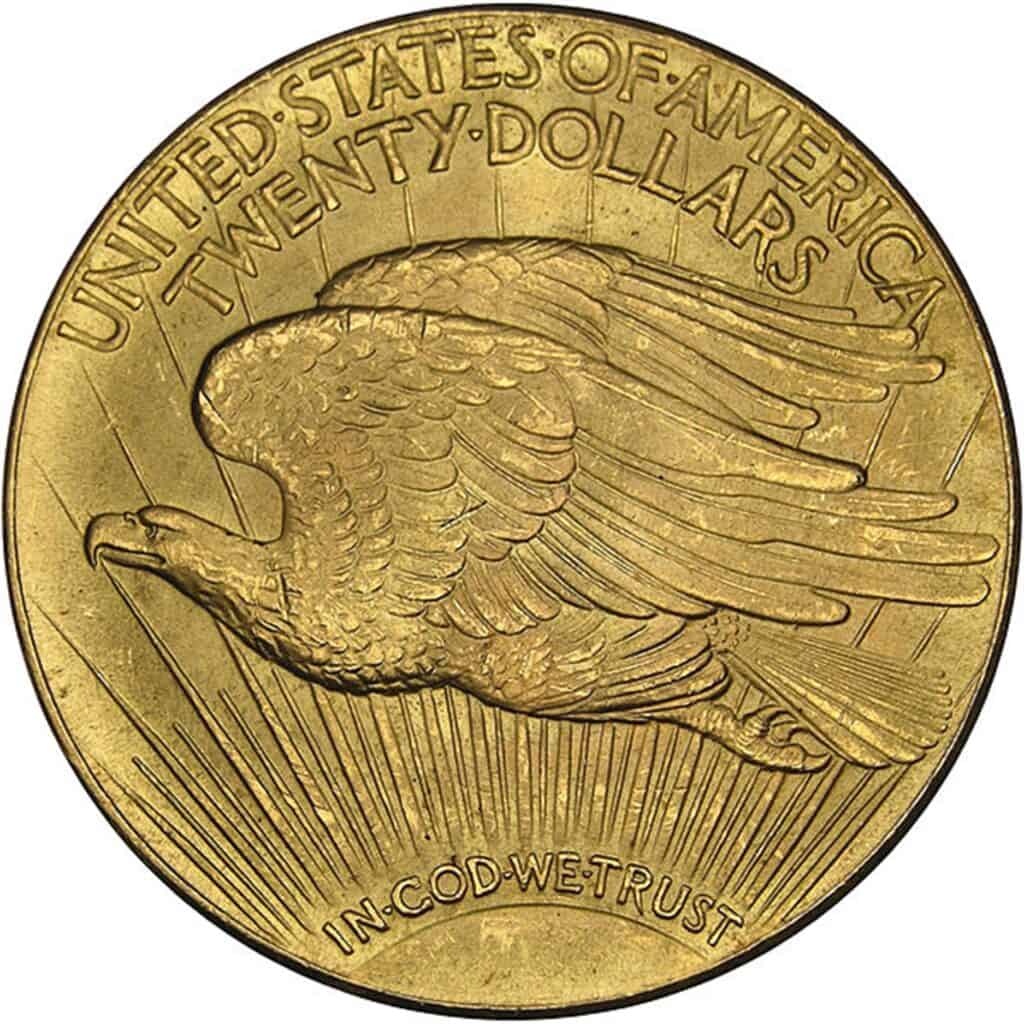 The most expensive U.S. coin is the 1933 Double Eagle. This coin is a 20-dollar gold coin minted in 1933, also known as the Saint-Gaudens double eagle. 445,500 instances of this coin were known to exist at one time. The reason this coin is absurdly rare and expensive now is that none of these coins were circulated to the public. In fact, all but two specimens were ordered to be melted down for their gold and turned into other coins.

Despite this, 22 coins were rescued by minters and collectors before being melted, 9 of which were later ruined, making the 13 surviving specimens of this coin some of the rarest coins anywhere on earth. Only one of these coins is in perfect condition and privately owned. It’s the one worth $18,900,000, which is the price it sold for in June 2021 at a Sotheby’s auction.

The 12 remaining coins are owned by federal agencies. The 2 originally saved from melting are still at the U.S. National Numismatic Collection, which is part of the Smithsonian. The other 10 are at Fort Knox in the United States Bullion Depository. The final coin sold here also sold in 2002 to a private collector for $7.59 million, making it valuable enough to technically earn two spots on this list.

Many of these U.S. coins are so valuable that they’ve only been sold in a few private auctions or are stored in official collections such as the Smithsonian. Any numismatist – that’s the word for someone who collects coins and money – would be in awe in the presence of these treasures.

8 Most Expensive Houses in Ohio Currently

8 Most Expensive Materials Found Around the World