8 Most Expensive Dresses Ever in the History of Fashion

Whether showcased at fashion expos, on the shoulders of the richest brides, or enrobing the most decadent movie starlets, the most expensive dresses have always defined the most fashionable ladies. While millions of dresses fly off the racks every year, we’re focusing on the most luxurious, designed by only the most coveted names in fashion history. What do you think #1 will be?

Here is our list of the 8 most expensive dresses of all time. 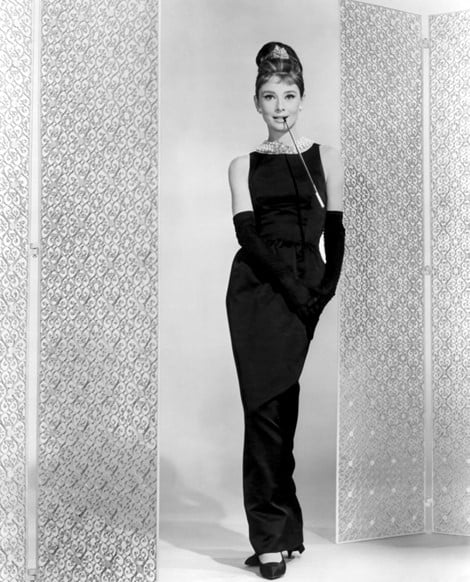 This famous Black Givenchy Dress was worn by superstar Audrey Hepburn in the 1961 film, Breakfast at Tiffany’s. It was designed by Givenchy for the opening of the film and is easily one of the five most famous movie dresses of all time. When people say, “a little black dress,” they’re probably referencing this one without knowing it.

The dress is best known for the film’s opening. However, Holly Golightly (Hepburn) wears the dress at least four times throughout the film. Only the accessories change to give the dress a different appearance. Natalie Portman, often considered the modern Audrey Hepburn, appeared in one of the Givenchy dresses used in the film in 2006 on the cover of Harper’s Bazaar. 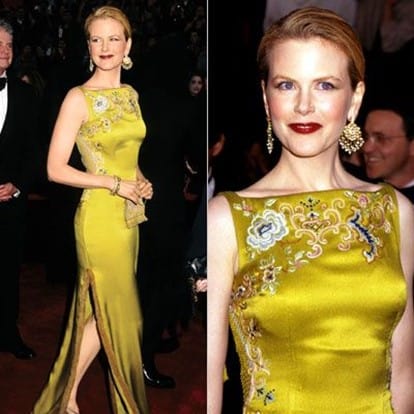 The Chartreuse Dior dress was designed by John Galliano for Christian Dior, the well-known luxury fashion designer. It is most famous for being worn by the Australian actress, Nicole Kidman, to the 69th Academy Awards in 1997 when she was still married to Tom Cruise.

At a sale price of $2 million, it represents the 2nd most expensive dress ever worn to a film event (more on that in a bit). The dress is made from flawless silk, which shimmered in iridescent chartreuse against the red carpet. Suffice it to say that no one was looking at Cruise that night!

Joan Rivers, the American comedian and television host, was reported as making gagging sounds when Kidman walked by, saying her dress looked like puke. Joan is entitled to her opinion, of course, but if she could have bought a $2 million Dior dress, she might not have been so repulsed by it. 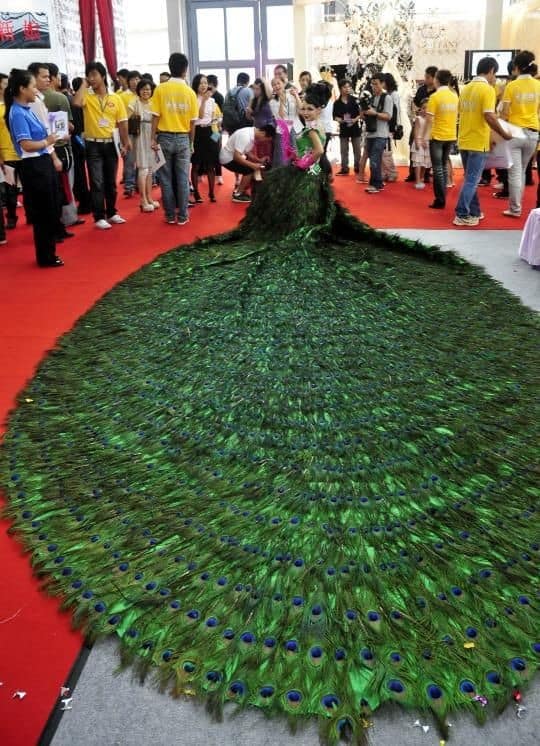 Vera Wang, the designer most famous for white lace trims, went outside of her fashion box when designing the Peacock Wedding Dress in 2009. Rather than the usual silk fabrics and jewels, this bridal gown was accented with over 2,000 peacock feathers by eight hardworking designers.

The dress was debuted in Nanjin, China at the Wedding Expo. It was listed with a price of $2 million.

Supposedly, the Peacock Wedding Dress was designed by Wang for Jennifer Lopez, who commissioned it to be worn to her wedding to actor Ben Affleck. However, this has never been confirmed as the wedding never happened. 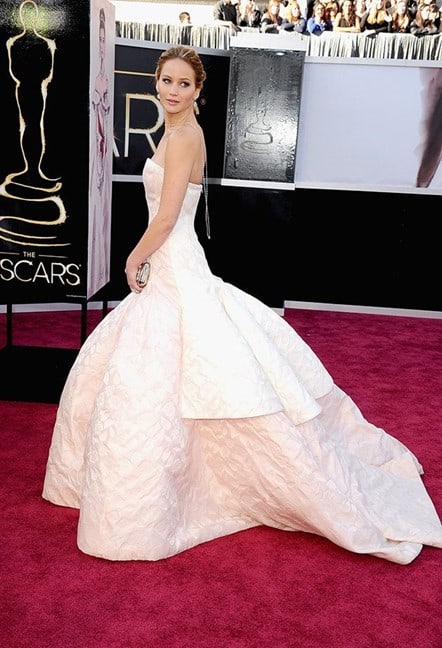 The most expensive dress ever worn to the Oscars, and consequently one of the priciest ever, was a white gown made by Raf Simons for Christian Dior and worn by Jennifer Lawrence at the Oscars in 2013.

This dress was the subject of some drama at the Oscars, including Lawrence’s infamous trip over her dress’s train as she climbed the steps to the stage to accept her best actress award for Silver Lining’s Playbook. The dress is worth $4 million, twice what Nicole Kidman’s was earlier on this list.

Due to the success of the dress at the ceremony, Lawrence signed a contract with Dior the next year to only appear in their couture, a contract worth $15 million. 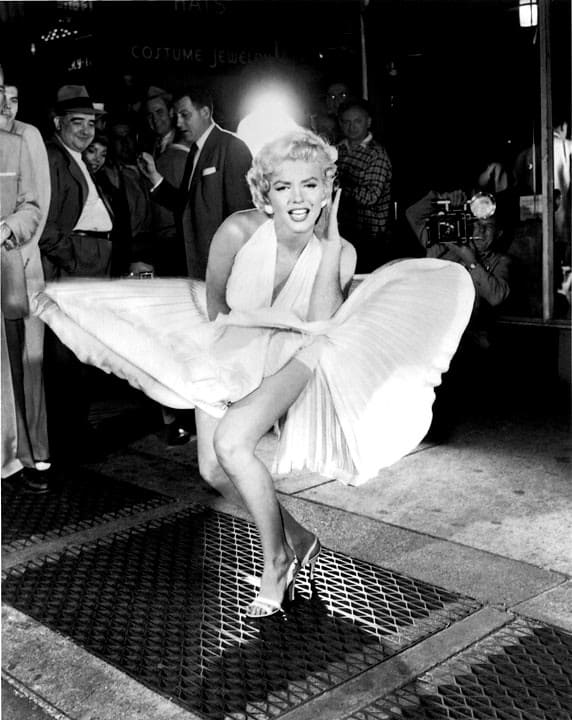 The white dress that Marilyn Monroe wore in the Billy Wilder film, The Seven Year Itch, is sometimes referred to as the “Subway Dress” in reference to the scene in the film. It was designed by William Travilla, who had previously won an Oscar for his costume designs in the 1948 film, The Adventures of Don Juan. Over the course of her career, Monroe had clothes designed for her by Travelli in eight films, with the subway dress being the most famous.

It was bought at an auction when Debbie Reynolds, who owned the dress by that point, put up her private memorabilia collection for sale in 2011. The final sale price was over $5.6 million, including the commission.

The scene as originally conceived was planned for the street outside the Trans-Lux. However, seeing Monroe on the street attracted so many fans that the now-iconic scene was actually part of the reshoots done later. Not only the film scene but pictures of Monroe in the dress standing over the subway grate as her legs are exposed by the hot air is one of the most iconic pictures of the entire century. 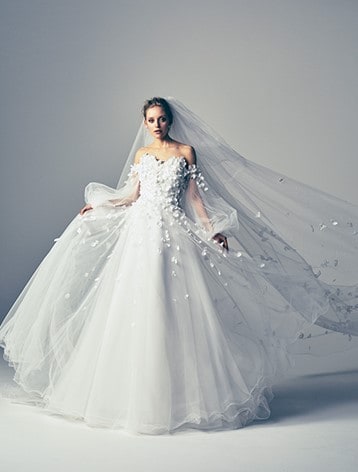 This silk wedding gown is embedded with precious gemstones and 1,000 pearls. These include an 8.8-carat green diamond and a 5-carat white gold diamond. Yumi Katsura, the Japanese fashion designer, crafted this wedding gown using zari embroidery, a special technique used in the most delicate bridal fashion designing.

The dress can be bought by one bride with exceptionally lucrative taste in men or deep pockets of her own for $8.3 million.

Zari zardozi, also known as zari embroidery, is a style used frequently in velvets, silks, and brocades to create the most ornate fabrics possible. It was introduced in Central Asia in the 1300s by Indian artisans and is now used by many luxury dress makers such as Katsura. 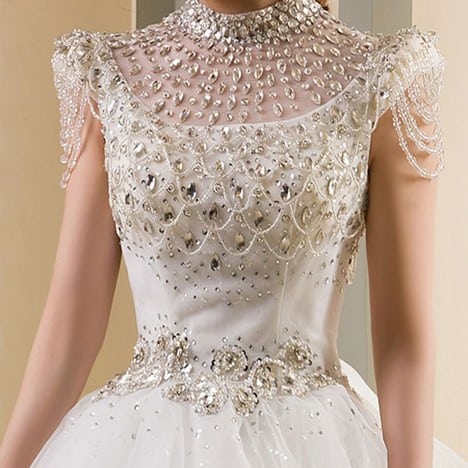 A wedding gown made by Renee Strauss in collaboration with the jeweler Martin Katz has an obscene price tag of $12 million, though no one has ever bought it or used it for their wedding. While it’s still hanging glorious and sparkling from its display rack, the world’s priciest bridal gown is still a showstopper.

The gown includes 150 carats of sparkling diamonds. It was made in 2006 from the finest available silks and fabrics, designed to sparkle in the light as the bride turns. While it hasn’t sold, the dress has made the Strauss name a bundle showcasing the brand’s decadence at luxury fashion displays and wedding gown exhibitions.

Renee Strauss does not want for celebrity clients in her lucrative bridal salon. She has tailored for such famous people as Kathy Ireland, Paula Abdul, and Shannen Doherty, as well as for shows like General Hospital and He’s Just Not That Into You. Martin Katz has also made the rounds, crafting jewelry that has adorned famous figures such as the likes of Angelina Jolie and Claire Daines. 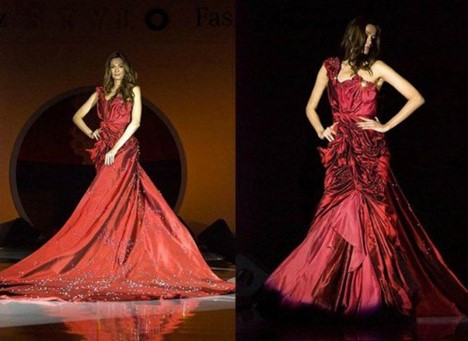 The most expensive dress is the Nightingale of Kuala Lumpur. The fashion designer Faisol Abdullah created this unbelievable dress under the label of the fashion house, Jendela. It includes 1,000 carats of diamonds, 750 stones in total, and a centerpiece show-stopper – a 70-carat pear cut diamond crafted by the jeweler known as Mouawad.

The dress was unveiled at a Malaysian fundraising event in 2009, worn by Indian actress, Kavita Sidhu. The money from the sale of the dress, which ended up being the most expensive among the 50 designer pieces shown at STYLO’s Fashion Grand Prix KL, went to the Gaza Humanitarian fund.

The name of this stunning red dress is a reference, according to Abdullah, to a poem by the 14th-century Persian poet, Hafiz, called “The Rose and the Nightingale

The most expensive dresses ever sold represent luxury film culture, designer bridal couture, and more. While most women will never be able to afford these exact dresses, the brands that design them make millions from putting beautiful women in them and parading them around ceremonies, galas, and on the covers of fashion magazines.

Seeing them in public makes millions of people think that by buying from the brand, they’re buying a bit of that beauty. We don’t know if it works like that, but it’s cheaper than buying a $30 million dress!

8 of the Most Expensive Lipsticks in the Market

8 Most Expensive Nerf Guns on the Market