9 Most Expensive Putters in the World

Golf is several centuries old. In Scotland, an early form of the sport involved hitting rocks across sand with a stick. The game was so popular that the nation banned it for fear it would distract soldiers!

The ban didn’t stick though, and Scotland’s early golf transformed into the sport we know today. The first 18-hole golf course was established in the 1700s. By that point, golf was popular among the nobility and other rich and powerful people. King William IV himself officially honored the golf course several decades later, naming it the Royal and Ancient Golf Club of St Andrews.

Modern putters usually cost about $600 max, but some are way more pricey. Learn more about the world’s most expensive putters with this list! 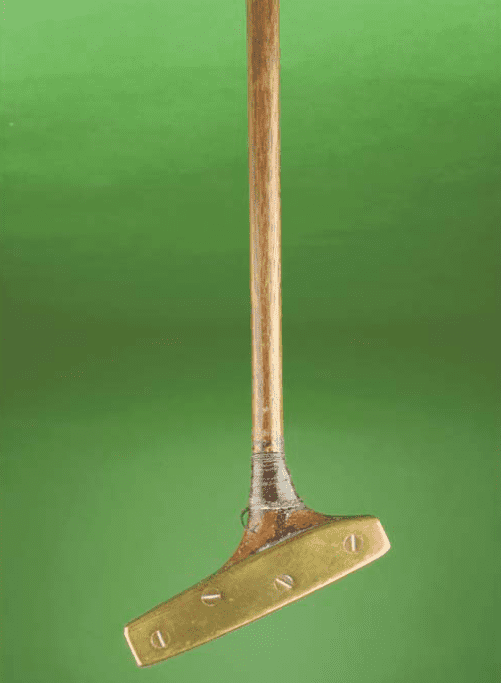 Jerome “Jerry” Travers was born in New York City in 1887. The newborn grew up to become one of the world’s most celebrated pro golfers, winning the State Amateur four times (and being the first golfer to do so). Jerry was also the 1915 USGA Open Champion, and in 1913 he won the US Amateur Open Championship.

The pro used this putter at the 1913 event, making this one of the most collectible pieces of golf history on the market.

Following his win in 1913, Jerry used this golf putter again at the 1915 US Open. Yet again, Jerry won the competition. Jerry then gifted the putter to William Dear, a golfer from New Jersey. Christie’s auction house sold the putter in 2005 for about $5,500, making it one of the world’s most expensive putters.

Jerry Travers passed away in 1951. 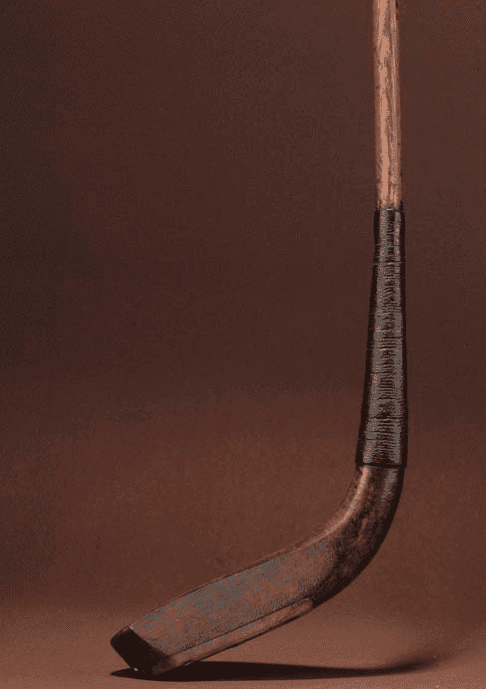 Hugh Philp was born in 1782 and died in 1856. The artisan made a variety of golf clubs, and his work quickly became collectible, even just a couple of decades after his death. Philp golfing equipment is even more collectible today, and some golf fans are willing to pay thousands to get their hands on an authentic Hugh Philp putter.

“Ever since his death in 1856, Hugh Philp has been universally recognized as clubmaking’s finest artisan,” says one report, “His clubs have been copied and even forged, complete with his name…Today, Hugh Philp’s legacy continues unabated. He is considered the premier…clubmaker. He set the standard by which the work of other clubmakers is measured.”

In the summer of 2007, Christie’s auction house sold one of Philp’s collectible putters for a whopping GBP 4,800 (about $5,500). The putter is reportedly one of only about 190 known examples, so it’s incredibly rare. Philp golf equipment will probably get more expensive over time, especially as fewer and fewer putters survive the decades.

This putter was expected to sell for at least GBP 3,500. 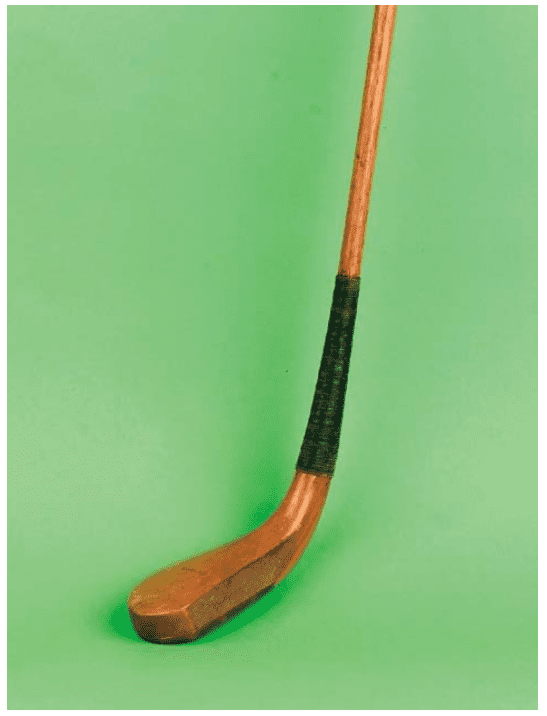 Blair Castle might look like something out of a fairy tale, but it’s totally real. The Scottish historical site is found in Highland Perthshire and has been around for centuries. Today, the castle is a tourist attraction, “More than 30 rooms are on display, full of Scottish cultural history, architectural design, period furnishings…and a colourful military past.”

This putter comes from Blair Castle. According to Christie’s auction house, the piece of golf history was sold on July 9, 2000, for a whopping GBP 8,225 (which equals about $9,500).

This golf putter was expected to sell for GBP 2,000 at most. 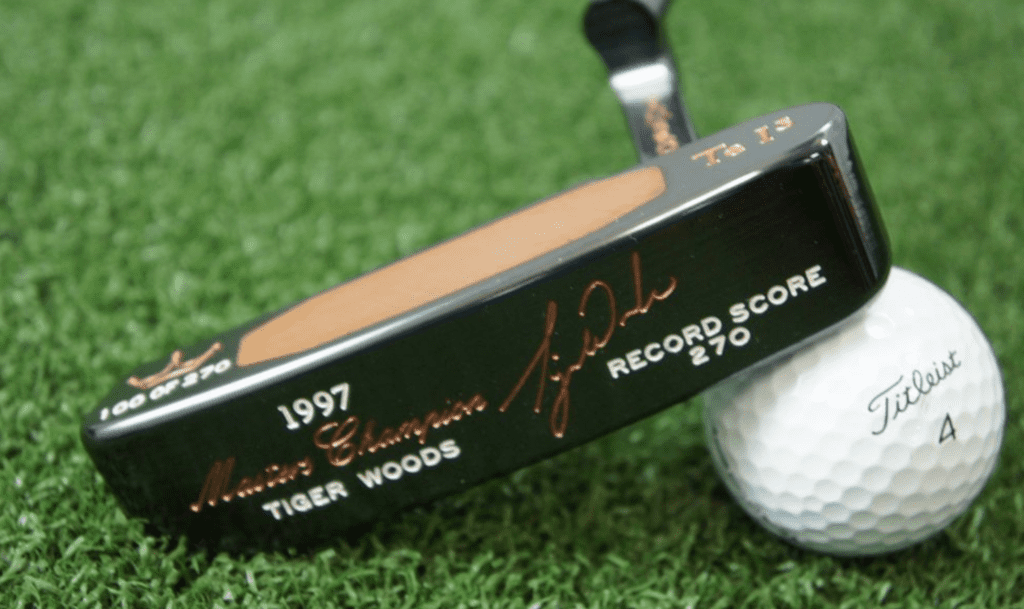 Tiger Woods is probably the biggest name in golf, so it’s no surprise that people spend thousands on Woods memorabilia. To celebrate the 20th anniversary of his ‘97 Masters win, replica putters were modeled after the Scotty Cameron design Tiger used to secure his first major trophy.

Only a limited number were produced, and they’re very expensive. According to reports, one sold for a record-setting $25,000 via an eBay auction, making it the world’s sixth most expensive putter.

Just 270 Woods’ Scotty Cameron TE I3 replicas were ever produced. Each putter is numbered and inscribed with Tiger Woods’ signature. 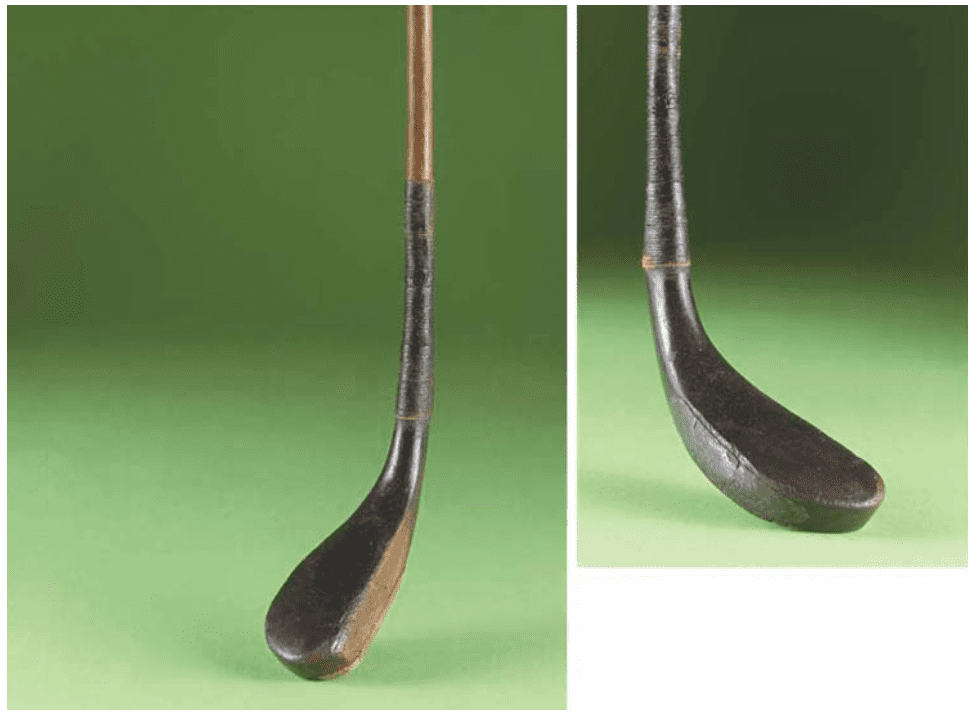 Made in 1835, this unique putter has an interesting history going back decades. According to a letter obtained by Christie’s auction house, this putter is connected to Ben Sayers, a Scottish pro golfer who died in 1924. The letter was written by Sayers’ granddaughter, who explains that her grandfather likely received it as a gift “in his early years.”

“Any clubs…we had/have were not ‘collected’ in the modern sense,” says Sayers’ granddaughter, “but over the many years we just accumulated quite an interesting lot of objects.”

Christie’s auction house sold this putter for about $27,700 in 2004, making it one of the most expensive putters in the world. 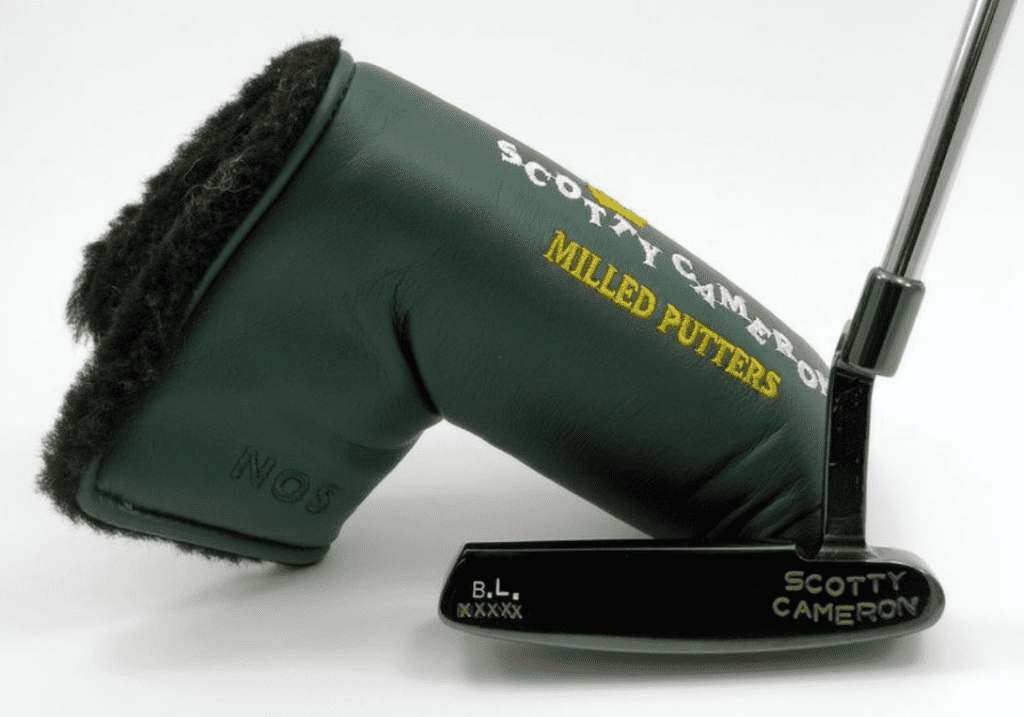 Bernhard Langer won the 1993 Masters Tournament using this very putter. The win was one of the first major victories achieved with a Scotty Cameron design, helping establish Langer and Cameron as golfing icons.

Golden Age Auctions sold this one-of-a-kind putter in the spring of 2021. Bidding started at a steep $5,000, but the final price was way higher. After about two weeks of online bidding, the final price rose to a whopping $59,097.60!

This putter was sold alongside a certificate of authentication provided by Scotty Cameron himself. Golden Age Auctions says the putter is one of the most important items among golf collectors. 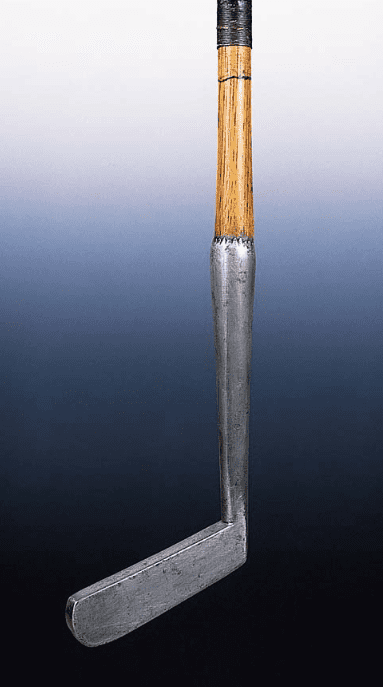 Christie’s auction house sold this rare putter in the summer of 1998. The incredible find is one of just a few remaining golf clubs from the 1700s-1800s featuring a metal head.

The putter features a suede handle and metal head. According to historians, most putters made around the late 18th century had wooden heads, as was tradition, so this putter is very unique. The final sale price was equal to about $122,000, making this the third most expensive putter in the world.

Simon Cossar, the presumptive maker of this putter, developed a variety of golf clubs around the late 1700s. 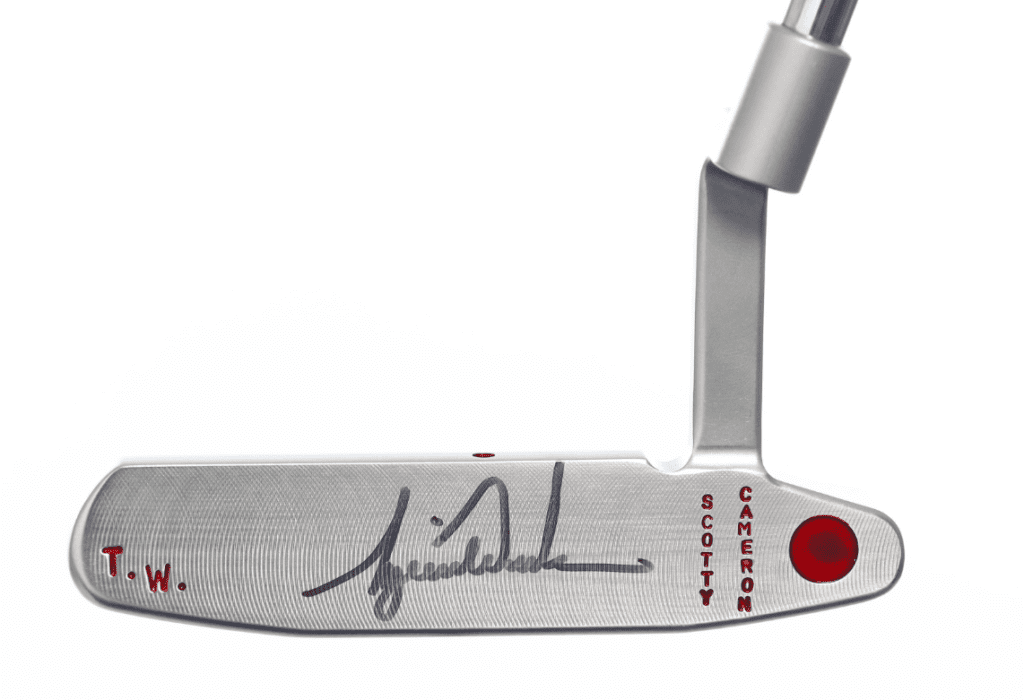 This is considered one of the most important and coveted pieces of golf memorabilia on the planet. “[The putter was] produced for Tiger in the prime of his career,” says Golden Age Auctions, “we know that the offered putter was handled by Tiger Woods himself – as Tiger beautifully autographed the face.”

According to reports, Tiger always tests his backups extensively to ensure they’re made exactly to his liking — but he never ends up using them during formal events. 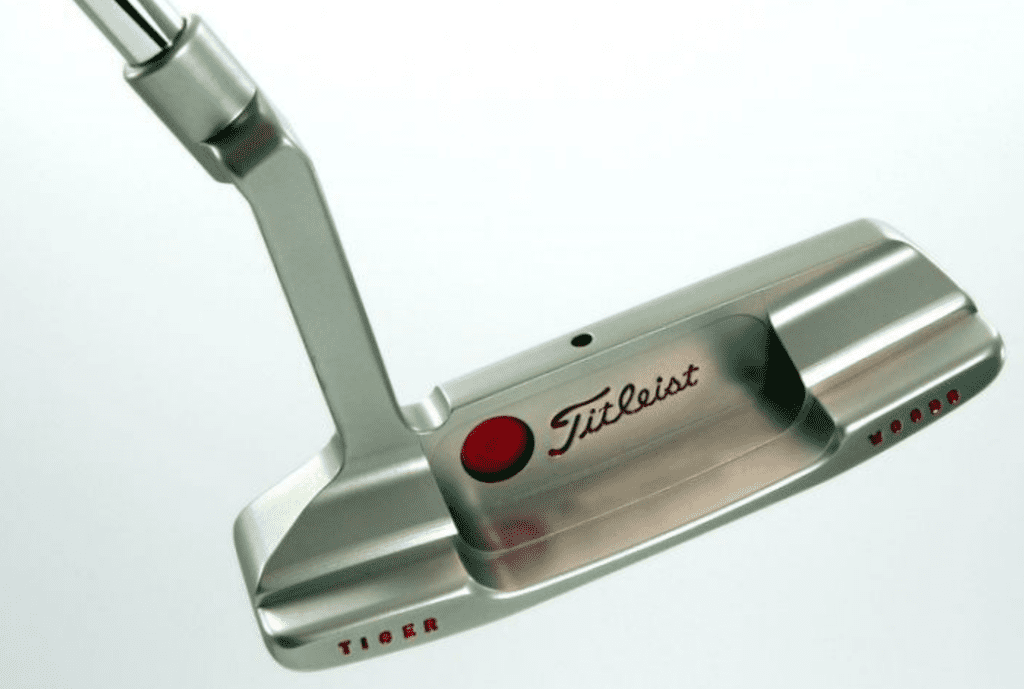 Tiger Woods’ Backup Putter is the most expensive putter in the world.

Tiger Woods is legendary for a ton of reasons. Five Master Tournaments, four PGA Championships, and a whole list of other victories make Tiger one of the most celebrated golfers of all time.

This putter was never actually used by Tiger during a game.