10 Rarest Diseases in the World

Rare diseases are those that affect only a small percentage of the world’s population, with scientists struggling to find causes and cures. Most rare diseases are genetic and many of them appear early in life. Awareness can be a problem, but there is a Rare Disease Day which is observed on the last day in February, in the U.S., Canada and Europe. Read on to see our list of some of the rarest diseases in the world.

Awareness: There are various research organizations around the world and the Hats On/Jeans Day for Progeria awareness program is based in Peabody, MA for organizing fundraisers.

Discovery: There are different forms of Progeria, however the classic form is called Hutchinson-Gilford Progeria Syndrome, named after 2 English doctors who first described it: Dr. Jonathan Hutchinson in 1886 and Dr. Hastings Gilford in 1897.

Treatment: The cancer drug Lonafarnib was used in trials, showing improvements such as weight gain, improved hearing, bone structure and flexibility of blood vessels, however there’s still no cure for Progeria.

Otherwise known simply as Progeria, this disease is caused by a fatal genetic mutation that results in rapid aging, beginning in early childhood. The life expectancy averages at 13 years, with approximately 100 documented cases where patients lived until their twenties.

Discovery: Occurring at epidemic levels in the ’50s and ’60s, it was eventually discovered by Daniel Carleton Gajdusek, whose research won him the 1976 Nobel Prize in Physiology or Medicine.

Treatment: There’s no treatment for Kuru, other than the preventative measure of not committing cannibalism.

Discovered only in a remote region of New Guinea among the Fore tribe and closely related to mad cow disease, Kuru is caused by prions, which is a protein that encourages build-up of abnormal brain tissue that results in irreversible brain damage. 100% lethal, it’s brought on by the consumption of human brains that contain the infection. The Fore tribes practiced cannibalism prior to the 1950’s to preserve the spirits of the dead, but it is now outlawed.

Discovery: The late Dr. Victor McKusick of Johns Hopkins University School of Medicine officially named the disease in the 1970’s.

Treatment: No known cure. If surgically removed, the body creates even more bone growth in the area.

Also known as FOP, Stoneman’s Disease is extremely rare and is caused by a mutation in the body’s repair system that causes muscles, ligaments and tendons to harden spontaneously (or after fibrous tissues have been damaged), resulting in permanently frozen joints. The story of Jeannie Peeper, a women who was born with FOP in 1958, is worth reading.

Treatment: Therapy and topical treatment of the skin conditions, along with treatment for mental health issues such as depression and anxiety.

Symptoms: Itchiness, crawling, stinging and biting sensations, black hairs, threads or specks on or under the skin, Rashes and sores, Memory loss and confusion, changes in vision.

An unexplained skin disease that some experts believe is psychosomatic is Morgellons, which involves black hairs or strange fibers on or under the skin, accompanied by painful skin sensations. Fringe communities such as alien and UFO enthusiasts believe the condition to be linked to extraterrestrial activity, although it is believed to be caused by issues related to anxiety and psychological disturbances.

An unrelated condition associated with black hairs was first mentioned in the 1600’s in France. In 2001 a mother from Pennsylvania named the disease after discovering that her young son suffered from the condition, but doctors came to believe that she herself was suffering from a condition known as Munchausen Syndrome by Proxy, where the parents fake illnesses in their children to gain attention from medical practitioners.

Awareness: There is no known awareness day or organization, however there’s an ongoing study conducted by metHb.

Treatment: Supplemental oxygen and a drug called Methylene blue, which restores the iron in hemoglobin to its normal oxygen-carrying state.

Symptoms: Blueish colorization of the skin, shortness of breath, headaches and dizziness, loss of hairlines, changes in mental status, fatigue and exercise intolerance, anemia, cardiovascular and lung disease, bacteria and toxins in the tissues, seizures and Coma 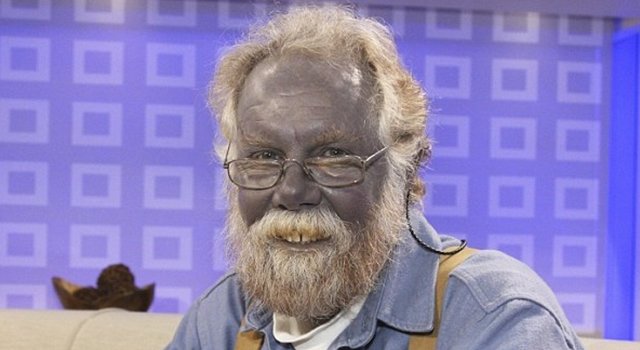 Also known as blue skin disorder, Methemoglobinemia occurs when elevated levels of methemoglobin affect how oxygen and ferric iron act in the blood. This results in the reduced ability of red blood cells to release oxygen to the tissues and can lead to seizures, abnormalities in the heart, and premature death.

In 1943 the first incidence of Methemoglobinemia was reported in the UK, where 2 members of a family were diagnosed with the condition, however it was made famous when it was discovered that a family in Kentucky had passed on the genetic traits through their 200-year history.

Treatment: There are no treatments to correct the head size and there is no cure, however some individuals can grow normally and develop intelligence. Treating the symptoms with therapy can be helpful.

This medical condition affects sufferers from birth or develops within the first few years of their life, caused by under-development of the brain which results in a smaller head size and abnormal facial features, with a range of severity. Those affected by Microcephaly can include conditions such as dwarfism, impaired intellectual ability, seizures, poor motor functions and speech. In the 19th and early 20th centuries, people with this disease were also called ‘Pinheads’ and sold to freak shows.

The genetic cause of Microcephaly was officially discovered in 2002 by an international team of researchers, although the condition may be traced back to Ancient Egypt where a notable dwarf was mentioned who might have been a sufferer.

Awareness: There’s no known awareness day or month for this condition, although there’s a foundation called The Romberg’s Connection, which is an international support group.

Discovery: PRS was first mentioned in 1825 by Caleb Hillier Parry in his medical writings and Moritz Heinrich Romberg described it a second time in 1846.

Treatment: Immunosuppressive drugs may help as well as skin, fat, and tissue grafts, although in some cases the condition reverses and suddenly ceases.

Symptoms: Atrophy of the skin and connective tissues, usually on the face, hair loss, scarring, reduction of pigmentation in the skin, severe tissue pain, migraines, recession of the eye orbit and visual abnormalities such as drooping eyelids, nausea and vomiting, decreased swelling at the site, dental abnormalities

Also known as progressive hemifacial atrophy, Parry-Romberg syndrome typically affects girls under 15 years of age, where the random areas of the skin appear to shrink or degenerate. Approximately 4 out of 1 million people have this affliction and experts are still debating the cause.

Awareness: There is no known awareness day or organization, although there are a few support groups.

Discovery: Felix Lewandowsky and Wilhelm Lutz were the physicians who first documented EV in 1922, calling it Lewandowsky–Lutz dysplasia.

Treatment: There is no successful cure for EV and while surgery can remove the growths, they do grow back.

Epidermodysplasia verruciformis is also called Treeman syndrome, which is a hereditary skin disorder characterized by an abnormal susceptibility to human papillomaviruses or warts on the skin.

These uncontrolled infections result in scaly growths on the hands and feet, starting around 1 year of age to 20, although it can appear in middle age. The regulation of the distribution of zinc is believed to play a part in this genetic mutation.

Awareness: There is no known awareness day or organization for this condition.

Treatment: There are currently no treatments for this condition.

RPI Deficiency has only three known cases historically, where the patients have a Ribose-5-phosphate isomerase deficiency. This means that they present with diffuse white matter abnormalities that affect the largest and deepest parts of the brain, along with developmental delays and psychomotor regression.

A 14-year old boy was seen by doctors in 1999, and he was exhibiting a developmental delay that included a slowing down of mental and movement activity, brain white matter disease, epilepsy, and a delayed conversion of glucose to fructose. 2 more cases were reported since then, with one of them diagnosed in 2018.

Awareness:There’s no known awareness program or day for Field’s Disease, however the two people suffering from it are very open about their experience.

Treatment: None, other than to treat the symptoms.

There are only 2 known cases of Field’s Disease in the world, named after Welsh twin sisters Catherine and Kristie Fields, which means that Field’s Disease is the rarest disease in the world. A neuromuscular disease that only affects only two out of billions of people, it causes muscular degeneration. The twins use wheelchairs for mobility and use electronic speaking aids. They live with their parents and access assistance through hospice workers, while still being examined by doctors who are researching treatment.

In 1994, when the twins were 4 years of age, they were seen by many doctors who administered countless tests and could not match it to any known disease. With no definitive cause, they reasoned that the sisters were born with it.

While the incidences of rare diseases are affected by the ongoing understanding and treatment of the conditions, the fact that new diseases are discovered often, and the occurrence and prevalence can depend on locations around the world and other various factors make it difficult to compile a concise and complete list. Hopefully, one day, scientists and experts will find a way to treat and inoculate us so that these and other rare conditions fade into history, as some illnesses already have.

Note: This page is not intended to diagnose or offer any medical advice. If you or a loved one are suffering from any serious medical conditions, you should seek care from the appropriate medical professional.