There was likely a time when you were a kid and wished nothing more than to climb the sky and touch the fluffy clouds that seemed to follow you everywhere. And the disappointment you experienced upon realizing that you couldn’t because they only look to be solid.

Clouds are aerosol masses consisting of liquid, frozen crystals, or/and other particles of the Earth’s atmosphere floating in the air. Clouds are formed due to air saturation when the air is cool enough for water vapor to raise and make these fluffy-looking beds.

Clouds rest in the Earth’s homosphere, where the gasses are the thickest, and they can be high up in the sky or closer to the Earth’s surface, depending on the requiring conditions.

There are three main types of clouds – stratus, cirrus, and the rarest cumulus. Enjoy cloud watching with this list of the top 10 rarest cloud formations from these three genera! 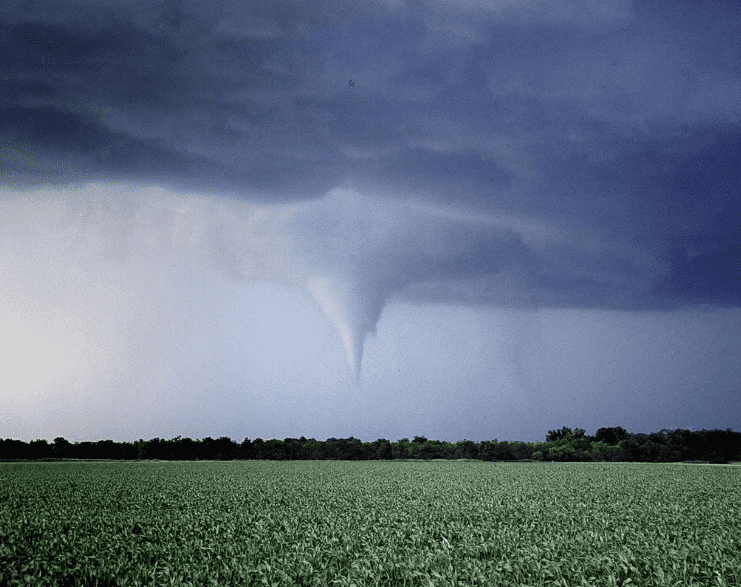 Funnel Clouds are sometimes mistaken for tornadoes due to their column or funnel-like shape. They consist of condensed water caught in rotating funnels of wind. The main difference between Funnel clouds and tornadoes is that the Funnel clouds don’t reach the ground as they stay airborne.

Funnel clouds can represent the beginning of a tornado if they reach the ground, gaining more strength as they move.

They form the same way as tornadoes when the wind picks up in a cone-like formation, and they can be spinning as well – just like tornadoes. They’re seen mainly in the United Kingdom.

Tornadoes are more violent than Funnel clouds, connecting Earth’s surface and a cumulonimbus or dense, towering cloud in the air. They occur most frequently in North America (more than 1,000 per year) due to the country’s flat and large terrain. 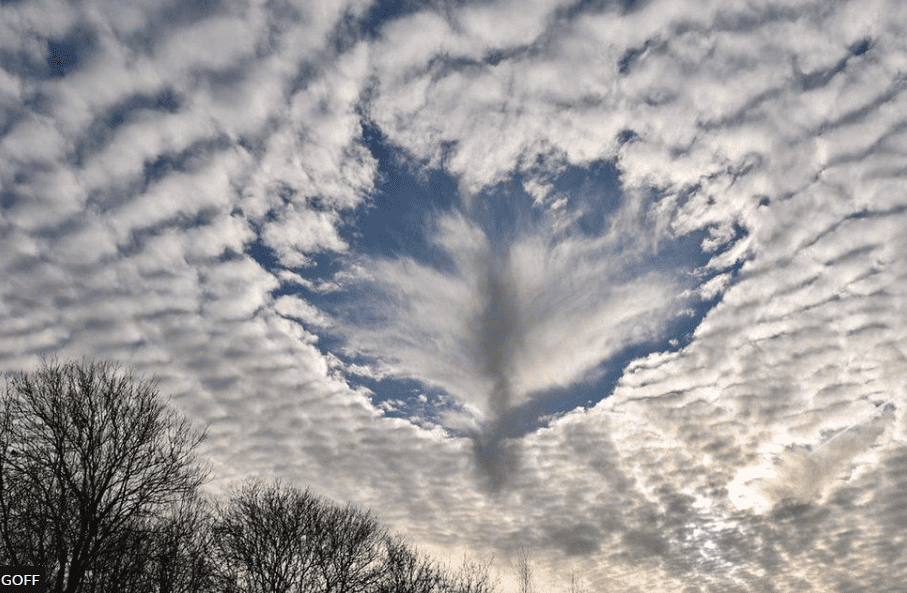 Fallstreak holes, also known as Hole Punch clouds, occur in cirrocumulus or altocumulus clouds. These clouds, or rather holes in clouds, appear due to cold water from the clouds evaporating suddenly, usually because of passing aircraft.

Fallstreak hole clouds have precipitation in a dry storm form, evaporating from a cold cloud before reaching the ground. These clouds can happen anywhere but are a rare sight to experience. Some mistake these clouds for UFOs descending from the upper atmosphere, but that’s not the case.

Cirrocumulus is one of the three main types of high-altitude clouds, occurring at 16,000 to 39,000 ft altitude. Altocumulus are middle-altitude clouds characterized by bigger and darker layers or patches of clouds, usually lower than cirrocumulus. 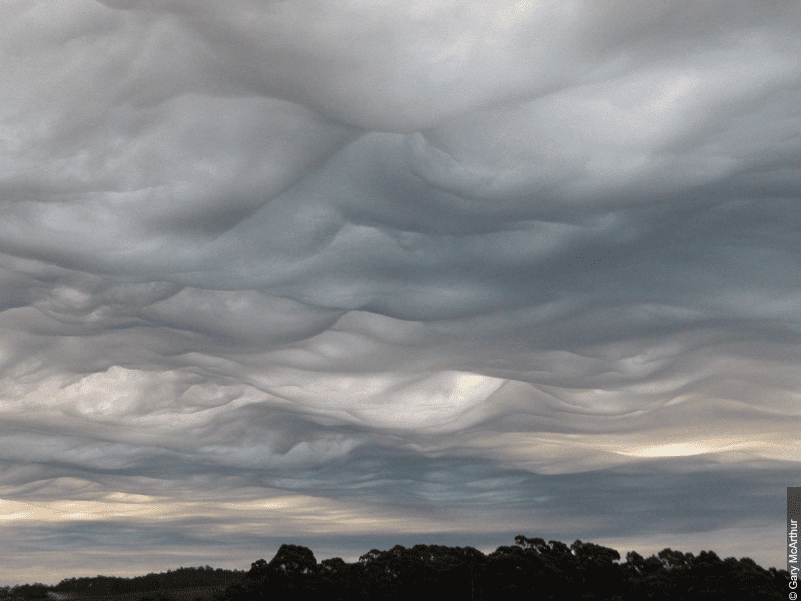 Formerly known as Undulatus Asperitas, these clouds form in rippling waves on the underside of other clouds, making the sky look like it has a rough sea surface. These clouds are the “youngest” on our list as they were recognized as a cloud type in 2017 by the International Cloud Atlas.

Since they are still relatively less researched, it’s unknown how these clouds form, as they have been seen in calm environments and in the aftermath of thunderstorms.

There is a theory about Asperitas clouds forming after Mammatus clouds descend, but nothing is proven yet.

A British author Gavin Edmund Pretor-Pinney suggested that Asperitas clouds should be added as the official new cloud formation in the International Cloud Atlas. He’s known for his books The Wavewatcher’s Companion and The Cloudspotter’s Guide about cloud watching. 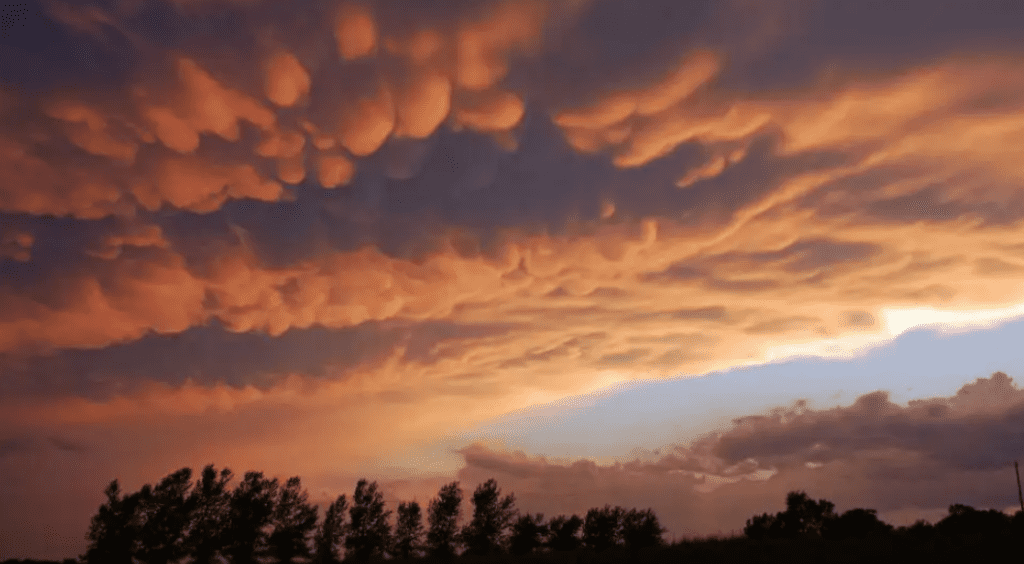 Mammatus clouds get their name from the Latin word mamma, meaning “breast,” as their form consists of lumps and bulges. They require unstable and stormy weather to form, but they usually appear after a thunderstorm has passed, not before, as people fear upon seeing these clouds in the sky.

Mammatus clouds occur underneath cumulonimbus clouds formed by turbulence. They’re not the rarest on our list but still uncommon to see that often. They are also one of the most irregular clouds that form from sinking rather than rising air.

Mammatus clouds can stretch for miles, formed by ice crystals, but the formation doesn’t last longer than 10-15 minutes. Each cloud pouch can be different, as some can carry opaque or translucent colors or darker, more ominous shades.

Lenticular clouds are stationary or saucer-like clouds occurring in the lower stratosphere. They are considered altocumulus standing clouds at high altitudes up to 40,000 ft in the air. Lenticular clouds need stable wind flow to form, usually over the mountain tops or tall buildings.

The clouds that form in this way are colder, with more densely packed air than the surrounding area. Lenticular clouds in the picture were taken in Japan, over Mount Fiji mountain, but the phenomenon also often appears over extinct volcanoes.

Aircraft pilots avoid Lenticular clouds, as with most cloud formations, but glider pilots actively seek them out to remain airborne due to the rising air currents that help them climb upward along moving air. 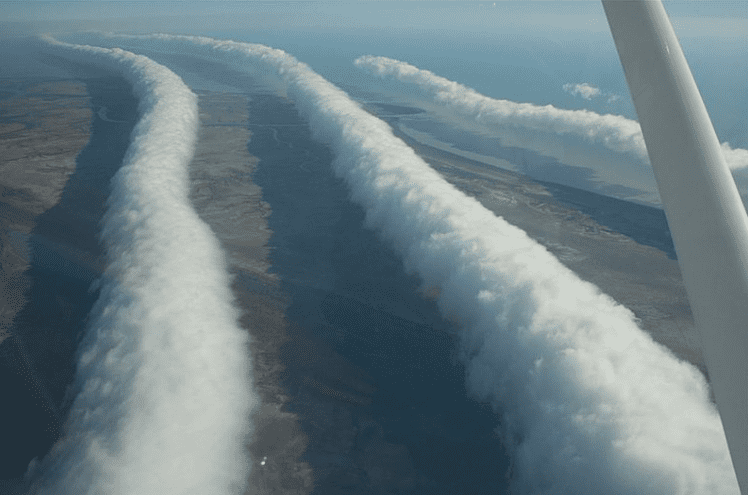 These clouds are rare but can happen anywhere, depending on the wind circulations. One of the most frequent occurrences is the Morning Glory cloud in Queensland, Australia, which usually happens in October due to a mix of sea breezes from over the Cape York Peninsula.

The second subtype of Arcus clouds is Shelf clouds, which are not that different from the Roll clouds. Shelf clouds are also low and horizontal, but they are attached to the base of another cloud, their shape resembling a shelf, hence the name. 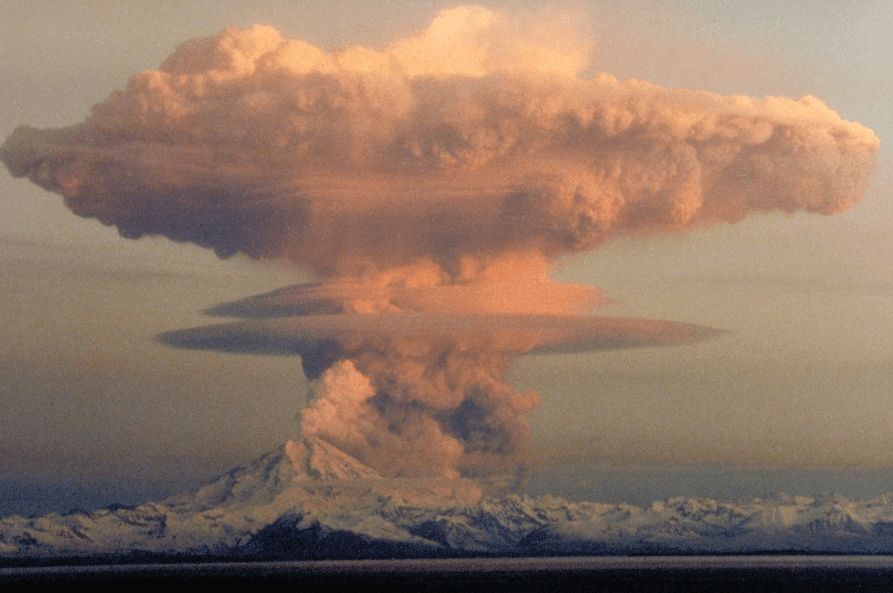 Mushroom clouds are the only non-natural clouds on our list as they are the product of large explosions. These mushroom-shaped clouds carry a lot of debris, smoke, and water vapor from explosions not occurring naturally without human interference, meaning they are highly infrequent.

These clouds are connected to nuclear explosions but can also occur from volcano eruptions. Mushroom clouds result after the sudden formation of a large mass of hot gases that rises rapidly in the air without having anywhere else to go, curling around the edges in a mushroom formation.

Possibly the most known mushroom cloud in history happened after the atomic bombing of Hiroshima and Nagasaki, Japan, in August 1945. The bombing cloud over Nagasaki was described by The Times as a “huge mushroom of smoke and dust.” 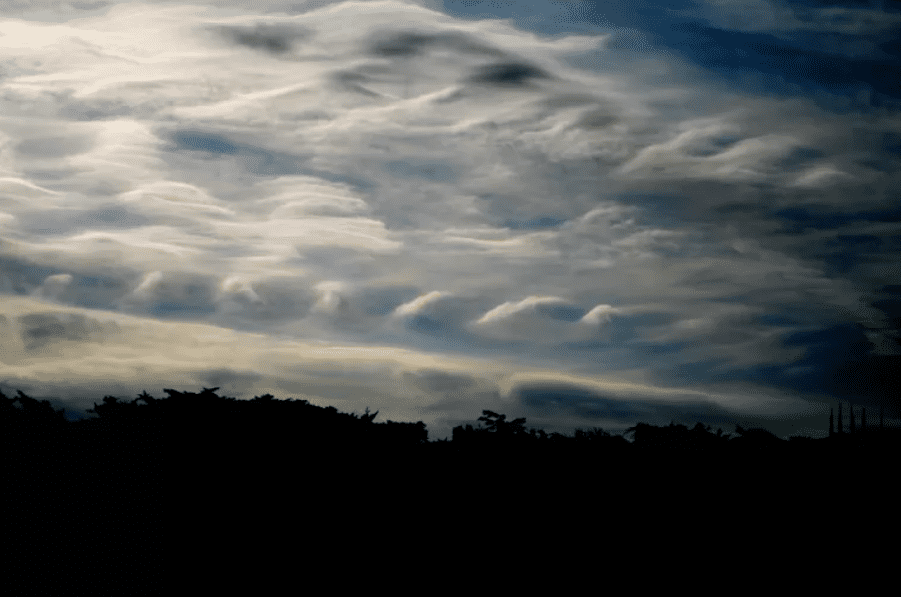 One of the rarest cloud formations on our list is Kelvin-Helmholtz clouds, named after physicists William Thomson, 1st Baron Kelvin, and Hermann von Helmholtz. The clouds look like vertical waves, formed when the upper layer of air moves faster than the lower layer.

Kelvin-Helmholtz clouds are called Fluctus because of this phenomenon, as they can be a good sign of wind shear or turbulence in the air. Because of this, these clouds often appear during windy days, occurring at altitudes above 16,500 ft.

These clouds got their name from the Kelvin-Helmholtz fluid instability that happens when there’s two velocity shear in one continuous fluid or between two fluids. In the case of the clouds, it can occur when the velocity or speed of the two layers changes. 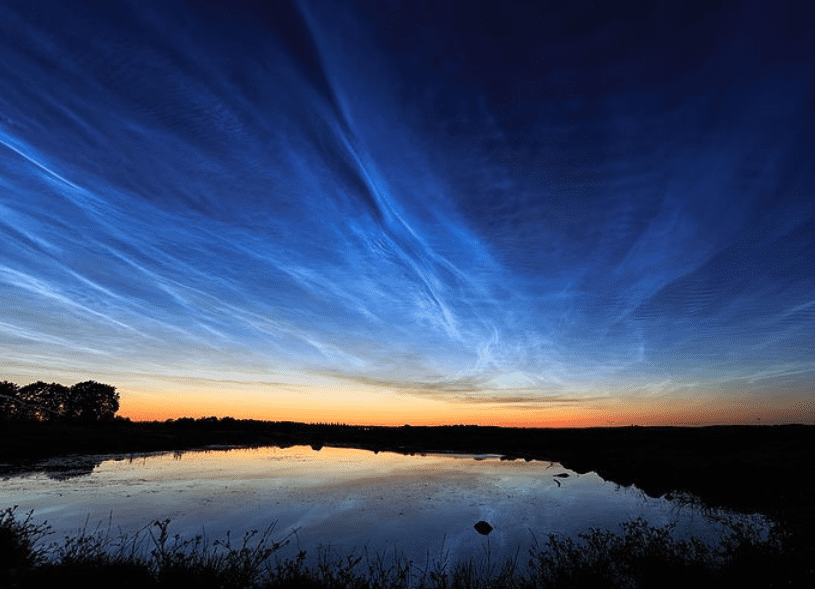 Noctilucent clouds are tied with Nacreous clouds for the rarest on our list because they are rarely seen, especially during the day when the Sun is the brightest. Also called night-shining clouds, these clouds occur in the mesosphere layer, almost 50 miles above the Earth’s surface.

Noctilucent clouds consist of ice crystals, but they don’t have precipitation as they occur during summer when the weather is dry. They are the highest-appearing clouds in Earth’s atmosphere and the newest of all the clouds we have today, first seen in 1885 after the explosion of the Krakatoa volcano.

Noctilucent clouds are visible the most when the Sun is below the horizon. It’s tough to see Noctilucent clouds. You would need to live at a high altitude, between 45° and 60° North or South latitude, in countries such as Canada, Norway, Finland, Spain, Italy, and Serbia, to name a few. 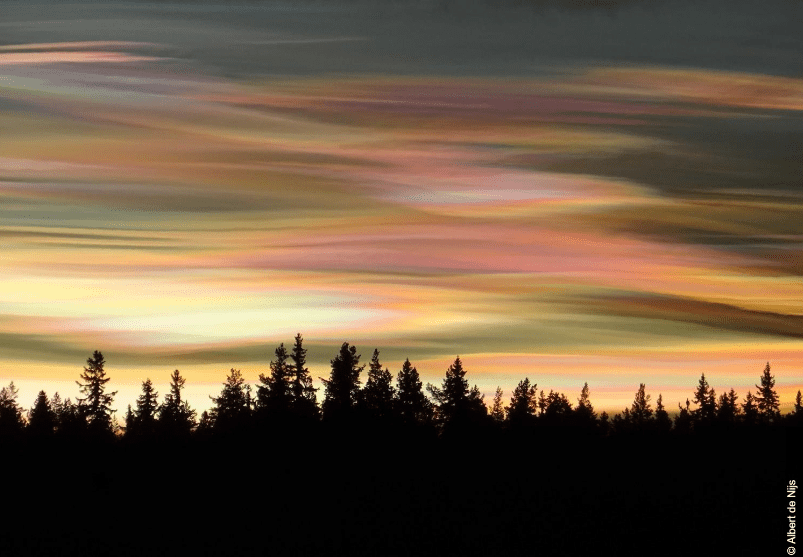 The rarest cloud formation is Nacreous clouds, also known as Polar stratospheric clouds. Nacreous clouds form best when the Sun is several degrees below the horizon, at sunset and sunrise. The Sun illuminates the thin disc clouds from below, giving them bright and iridescent colors.

They don’t have precipitation, as they are considered very dry clouds, often seen in Scandinavia, the Arctic, northern Russia, and Canada. Nacreous clouds form in colder weather, so they’re more likely to be seen during the polar winter.

9 Rarest McLaren Cars Ever Made

9 Most Expensive Lingerie Ever Released