8 of the Most Expensive Instruments in History

The world’s most expensive instruments were either made by master craftsman in history’s most famous workshops and preserved over centuries of playing or were the personal instruments of a famous musician or performance. Some of the one-of-a-kind instruments on this list are well-known for a moment in time, such as a film or a famous rocker. But as we go up the list, the instruments will become older and more well-built until topping off at some truly incredible antiques.

Continue reading to learn about the most expensive instruments in history, including when they were built, their original owners, and how they traveled through time to the auctions of today. 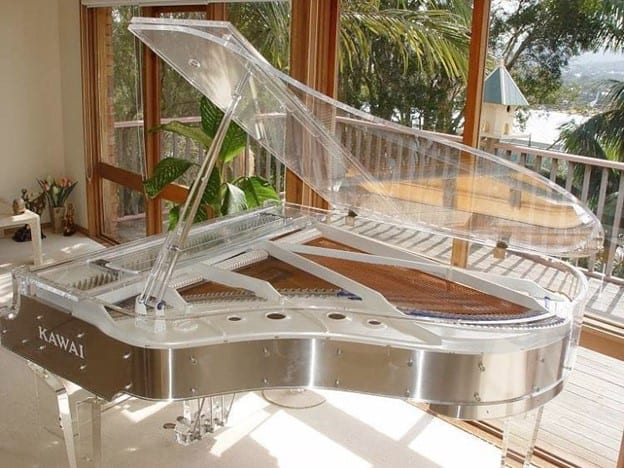 The Crystal Piano was designed by Heintzman and debuted at the Beijing Olympics in 2008 to be played by the famous concert pianist, Lang Lang. The piano is unique in that it’s made completely of transparent crystal (except for the sound board and keys). It’s part sculpture, part instrument, and sold for $3.22 million at a 2010 auction.

The 9-foot piano was deemed to be too fragile by the Canadian craftsmen who made it, so it was retired from public performances after the Olympics and sold to its current owners.

Heintzman goes all the way back to 1866. They’re most famous for the Nordheimer pianos. The original firm went out of business in the 80s, however, and the name and equipment was sold to its current owners, who are a Chinese instrument manufacturer. 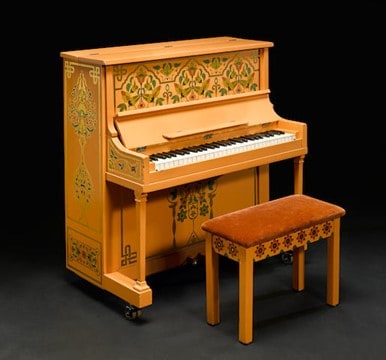 “As Time Goes By” is a piano, nothing too special by the looks of it. It’s a miniature upright made from simple wood, with 58 keys, designed by Kohler & Campbell. The outside is decorated with period-specific stenciling. So what makes this piano special enough to take in $3,400,000 at a 2014 Bonhams auction?

The name is the clue, which refers to the song that served as the anthem for the 1942 film, Casablanca. It’s the exact piano that Dooley Wilson, playing the character Sam, played in the film. You may recognize it by the famous movie quote, “Play it again, Sam.” Truthfully, no one said that in the film (they said both “play it again” and “play it, Sam”) but the quote, the film, and the piano are cinematic treasures regardless.

This piano in playing the refrain of the song, “As Time Goes By,” created one of the most famous themes in movie history. It later became the theme song for the entire studio and plays nearly every time the WB logo appears at the beginning of a movie. 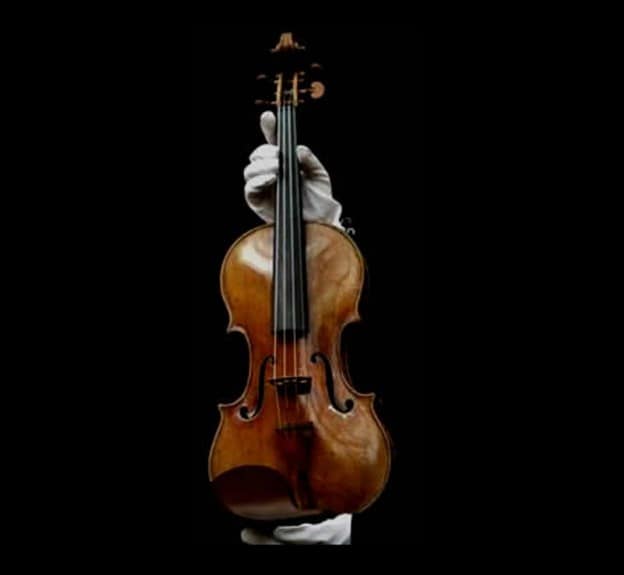 The first of many antique string instruments on this list, the Hammer Stradivarius Violin was built in 1707 by the famous violin craftsman, Antonio Stradivari. It is now named after the 19th-century collector, Christian Hammer, who is the first owner recorded for this show-stopping violin. In 1911, it found its way to the teacher Bernard Sinsheimer’s collection.

The next relevant shift came in 1992 when it was purchased by a Japanese oil conglomerate and lent to Kyoko Takezawa, the concert violinist. It was finally sold for its $3.54 million tag in 2006 at a Christie’s auction.

Antonio Stradivari is a name that you’ll need to know for the rest of this list. He’s the most famous luthier in history, which is a craftsman who builds string instruments such as violins, violas, and cellos. The name comes from its origins as the moniker of a lute craftsman, but it eventually expanded to include all instruments with bows, strings, and a sound box (meaning no harps). 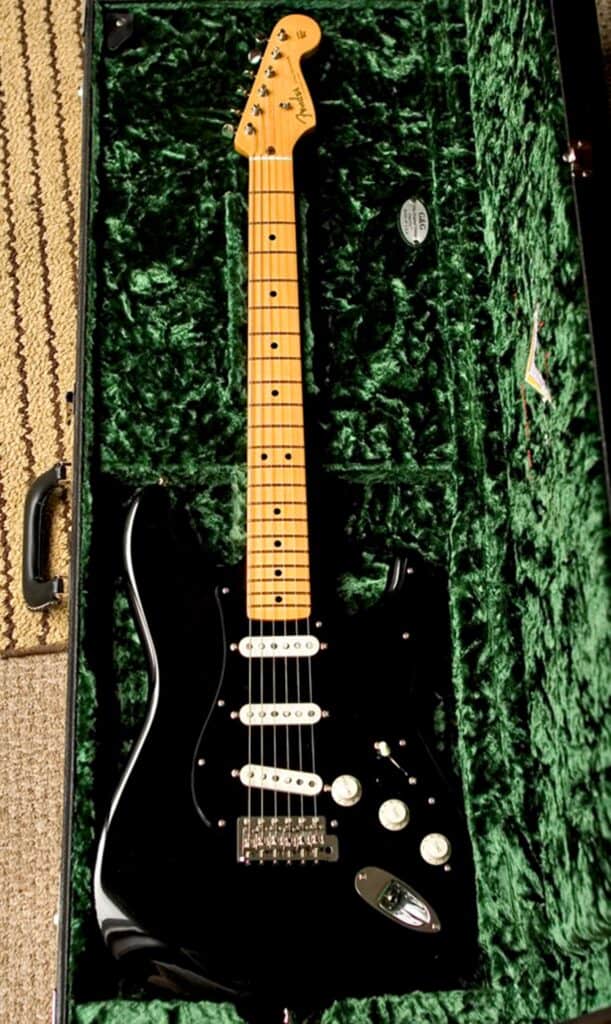 The Black Strat was the guitar of choice for Pink Floyd’s David Gilmour. It’s really a 1969 Fender Stratocaster, the one that brought Money and Comfortably Numb to the ears of fans around the world. Over time, the Black Strat has been modified several times into the guitar it is now, including the black paint and alternating maple and rosewood necks. At this point, the Black Strat has almost no original pieces other than the bridge plate. The guitar’s history drives the price in this case rather than the parts.

This guitar was sold in 2019 at a charity auction for $3.975 million, at the time making it the most expensive guitar ever sold. It sold to Jim Irsay, the owner of the Colts.

Gilmour was a model before joining Pink Floyd. After rising to fame and fortune, he was named a Commander of the Order of the British Empire for his contribution to music. 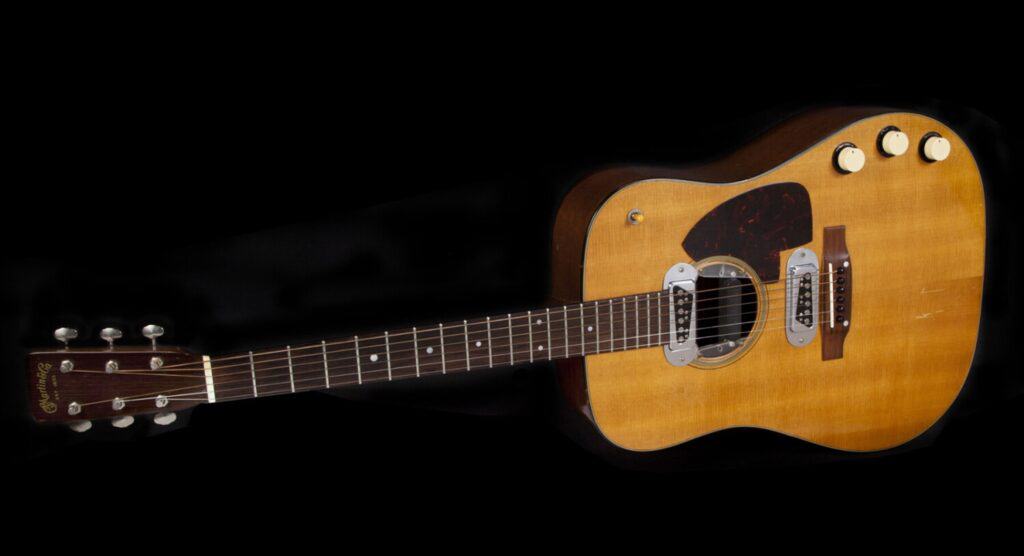 The Martin D-18E guitar has the distinction of being the last instrument on this list from the 1900s. Built in 1959, this guitar is the iconic instrument of Kurt Cobain, the lead for the alt rock band, Nirvana. It sold for just over $6 million at a Julian’s auction in 2020, making it the most expensive guitar ever sold.

Cobain played this guitar at his famous MTV Unplugged concert. It is now owned by Peter Freedman, best known as the owner of RØDE Microphones.

Cobain bought his Martin D-18E from Voltage Guitars in Los Angeles after having it modified for his left-handed playing style. It came with his personal guitar case, an open pack of guitar strings used by Cobain, three of his personal guitar picks, and a flyer for Feel the Darkness. 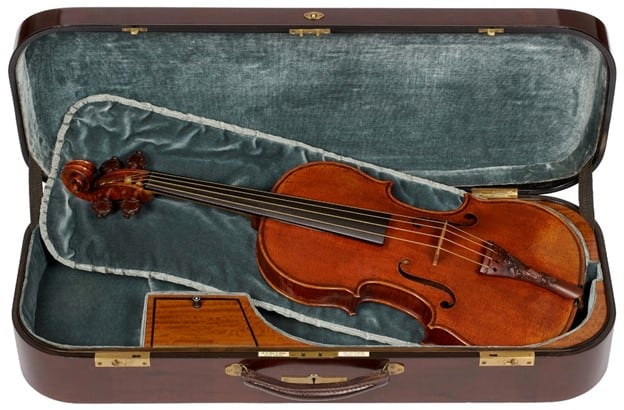 The violin was crafted around 1721 and fell off the map, later to be found in Spain around 1860 where it was picked up and owned by Jean Baptiste Vuillaume, a violin craftsman in his own right. Another magnificent piece by Stradivari, the violin known as “Lady Blunt” is named after one of its first recorded owners, Lady Anne Blunt.

It remained in their family until selling for $200,000 in 1971 at a Sotheby’s auction, then later to the Nippon Music Foundation for $9.8 million, and finally for charity at the Nippon Foundation relief fund through Tarisio Auctions, where it brought in $15.9 million.

Since few violin players have owned the Lady Blunt violin, it has been rarely played. Passed between collectors, the violin is one of the most well-preserved Stradivarius instruments in existence. It even has its original PG form neck. 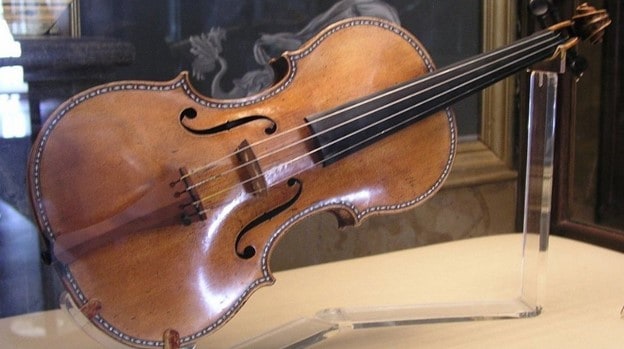 The personal violin of the Belgian composer and musician, Henri Vieuxtemps, the Vieuxtemps Guarneri del Gesù was built in 1741 and is considered to this day to be the greatest violin ever built. It’s called “del Gesù” or “of Jesus” because of its manufacturer Bartolomeo Giuseppe Guarneri, who incorporated religious icons like the Roman Cross in his work.

When Vieuxtemps died, the violin was given its own processional behind his hearse, carried on a satin pillow. After that, it was played by other masters like Perlman, Menuhin, and Zukerman. In 2012, the Vieuxtemps Guarneri del Gesù was bought for use by the American concert violinist, Anne Akiko Meyers. Its sale price was never disclosed, but the instrument is estimated to be valued at $16,000,000.

Before we get to the most expensive instrument in the world, we want to mention the MacDonald Stradivarius Viola, built in 1701 by Stradivari. Sotheby’s tried to sell the violin in 2014 for a sealed-bid auction price of $45 million, but no one bid. Until we know the real-world sale price of this piece, we didn’t want to include it on this list. 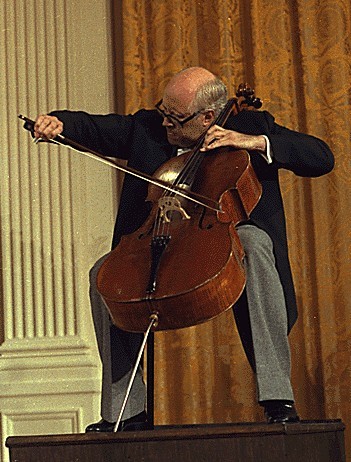 The most expensive instrument is the Duport Stradivarius Cello. To conclude our journey through the work of the master craftsman Stradivari, we have this show-stopping cello constructed back in 1711, making it the most perfect cello (and string instrument) in existence.

It was commissioned by Louis XIV’s physician, Francois Chicoyneau. Around 1800, the cello was bought and played by the cellist-composer, Jean-Louis Duport, who has since lent the instrument with his name. Fast forward to 1974 – the cellist Mstislav Rostropovich bought it to play. After his death, the Nippon Music Foundation reportedly bought it for $20,000,000, though this claim has never been fully verified. The Rostropovich family still claims ownership of the cello, though no one has seen or heard the instrument for decades.

Despite this dubious history, the Duport Stradivarius Cello is the most expensive instrument ever sold.

In 1812, when Jean-Louis Duport was still the cello’s owner, he allowed Napoleon Bonaparte to try his hand at the instrument at Tuileries Palace. According to legend, a dent that can still be seen on the base of the cello was caused by Napoleon’s boots.

The world’s most expensive instruments are cultural artifacts in addition to being amazing to play. Most were owned by famous musicians or collectors before trickling to today and making a few lucky auction houses millions. Count yourself lucky if you’ve ever heard one of these show-stopping instruments in action.

8 Most Expensive Mustangs Ever Made

8 Most Expensive Types of Cigarettes on the Market