Macallan was founded in 1824, making it one of Scotland’s oldest and arguably most venerated whiskey distilleries. Their oldest whiskeys were aged 81 years before being bottled, but even Macallan bottles only aged for a few decades can sell for thousands if the quality is high and the supply is scarce.

This list includes both the most expensive Macallan whiskies that you can still buy on the market as well as the most expensive ones that have ever been sold at auction. Together, they represent the holy grails of whiskey collecting.

For clarity, we only included the sales of single bottles of Macallan, not the auctions for whole casks. 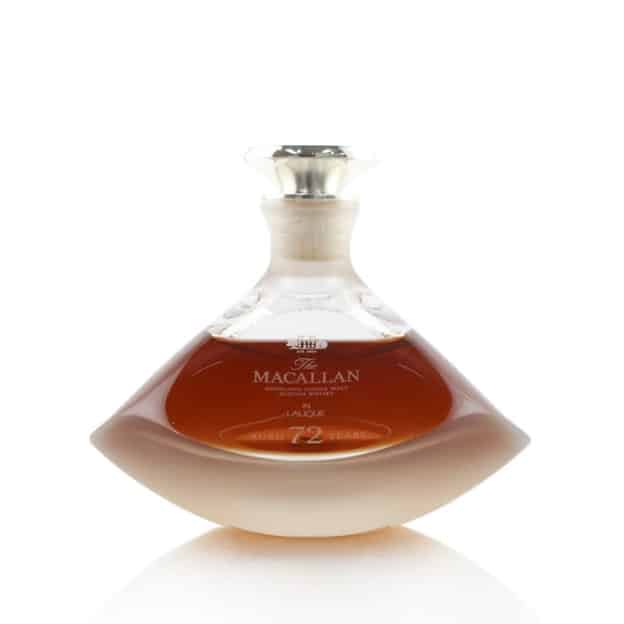 The scotch listed as the Macallan Lalique Genesis Decanter Speyside Single Malt Scotch is a 72-year-old limited release that tastes of delicate peat and crisp lemon, with green apples on the inhale. The flavors in the background include vanilla, raisins, and ginger. The whiskey has a strong, sweet mouth coating that tastes like apples.

The Lalique Genesis Single Malt Scotch comes in a 70cl decanter and debuted in 2019, with a limited supply of 600 bottles released worldwide. It debuted at $60,000 per bottle, but due to such limited supply, it is now worth $191,981.

Speyside is a geographical area located between Aberdeen and Inverness in the Scottish Highlands. Only whiskey distilled near the river Spey can be called a Speyside whiskey. 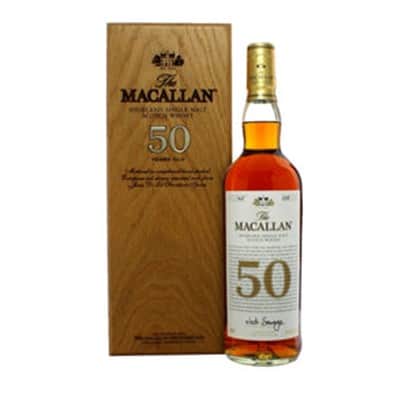 This Macallan 50-Year-Old Single Malt Scotch Whiskey was aged 50 years before being bottled in 2018. Only 200 bottles of this Speyside single malt were released from their sherry-seasoned oak casks, hand-crafted in Jerez, Spain. Each bottle is individually numbered by hand.

The nose of this whiskey is a spicy, vanilla aroma, with undertones of blackcurrants and the smokey peat tone synonymous with Macallan scotch. Owning one of the 200 bottles of this whiskey will cost you $199,999.99.

The palette of this scotch whiskey is a flavor of vanilla oak, with other amazing flavors underneath like toffee, chocolate fudge, a kick of black pepper, and a hint of orange peel. The finish is long and smooth, with a lingering taste of sweet figs.

3. The Macallan “The Reach” 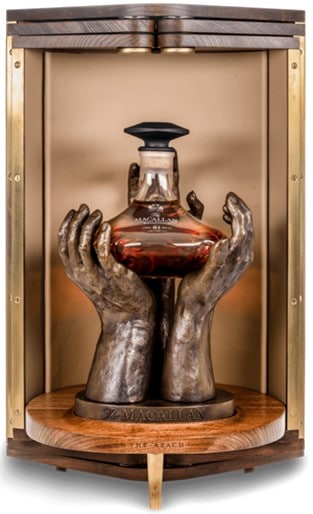 The bottle known as The Macallan “The Reach” is an 81-year-old creation that marks one of the oldest Macallans that you can buy, bottled back in 1940. These 288 original bottles were made at Speyside from mouth-blown glass. The decanters alone are now valued collector’s items.

The sculptor Saskia Robinson created the trio of bronze hands holding the decanter up. They represent a trio of workers that defined the brand’s production, including the chairman Allan Shiach, Kirsteen Campbell, aka the Master Whiskey Maker, and the collective Macallan workers.

This whiskey has a unique aroma of chocolate, with dark, sweet cinnamon and aromatic peat scents. The palette is earthy-sweet, consisting of toffee, smoky pineapple, and crystalline ginger with a sweet n’ smoky finish. 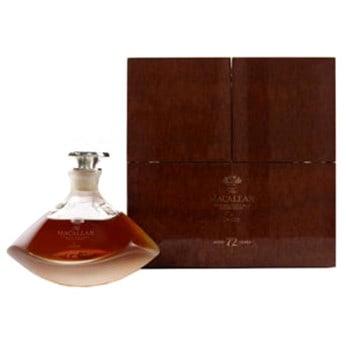 The Macallan Lalique Genesis Decanter Speyside is one of the oldest single malts that Macallan has ever released. This limited-edition decanter represents a strong statement for the brand’s identity, showcasing 72 years of quality aging in a crystal bottle that shows off the brand’s classic craftsmanship.

The bespoke decanter only adds value to the Macallan Lalique Genesis Decanter Speyside, which is selling online for $212,000. The flavor is incredible, with a palette that starts as a taste of peat and vanilla, with a gentle undertone of oakwood and sweet spice around the edges, mixed with various fruit.

The flavors of this whiskey are only enhanced by its “nose.” The aroma starts as a sensation of peat and transforms into a soft smoke that smells of oak. The body of the aroma has a refreshing feel, full of green apple and lemon, with undertones of vanilla, raisins, and ginger. 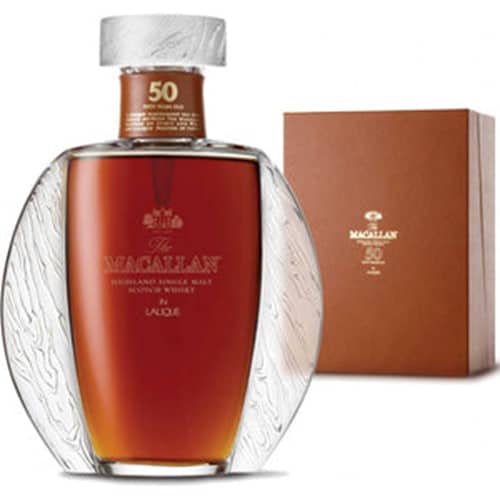 The most expensive Macallan that you can buy is The Macallan Lalique Single Malt Scotch Whiskey. This 750ml bottle is an 86-proof treasure featured in Rolling Stone and Men’s Journal.

It’s a 50-year-old whiskey and the first in Macallan’s anniversary release known as “The Six Pillars Collection.” Every bottle in this collection was aged for 50 years, minimum.

A bottle of The Macallan Lalique Single Malt Scotch Whiskey can currently be bought on Cask Cartel for $299,999.99.

The aroma of this whiskey is heady, with hints of cardamom, cumin, and maraschino cherry. The palette is bitter, with undertones of chocolate and prune, with a strong, sherry-oak finish.

The Most Expensive Ever Sold

The Macallan “M” is bottled in a six-sided glass creation that pays homage to the “Six Pillars,” the six methods of Macallan distilling that they established in 1700. The bottle was crafted using hand-blown glass, with 17 Macallan craftsmen working for over 50 hours to complete a single decanter.

Of the Macallan “M” bottles in existence, only 4 utilize this incredible six-sided design, known as the “Constantine” bottle. The whiskey itself was aged for 25-75 years, depending on the batch. This particular bottle of Macallan “M” was sold at an auction for $964,200.

The Six Pillars of Macallan scotch distilling include their principles of refinement as well as their process. They are: 1. The Spiritual Home (this refers to the Macallan grand highland estate), 2. Small stills (made from copper), 3. The finest cut, 4. Exceptional oak casts, 5. Natural color, 6. Peerless spirit. 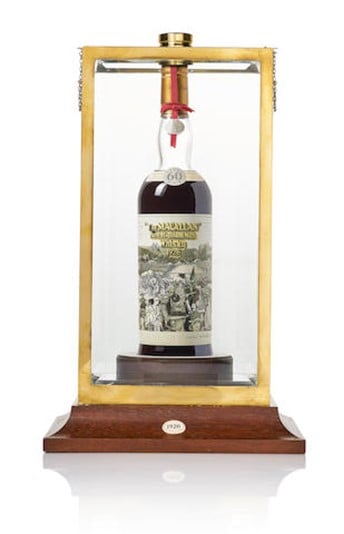 The Macallan Peter Blake was released in 1986 after being distilled and bottled in 1926. Only twelve bottles were made in this particular vintage, signed by both Sir Peter Blake, the famous pop artist, and Mr. Allan Shiach, then-chairman of Macallan. The bottle that sold at a Bonham’s auction for $1,014,871 was number 8.

Peter Blake is most famous for creating the cover of Sgt. Pepper’s Lonely Heart Club Band, the 1967 Beatles album. His idea for a magical, surreal crowd surrounding the group like a mosaic of historical figure cutouts changed the face of album cover art forever.

Rolling Stone even voted the album the greatest of all time in their list of the 500 greats. 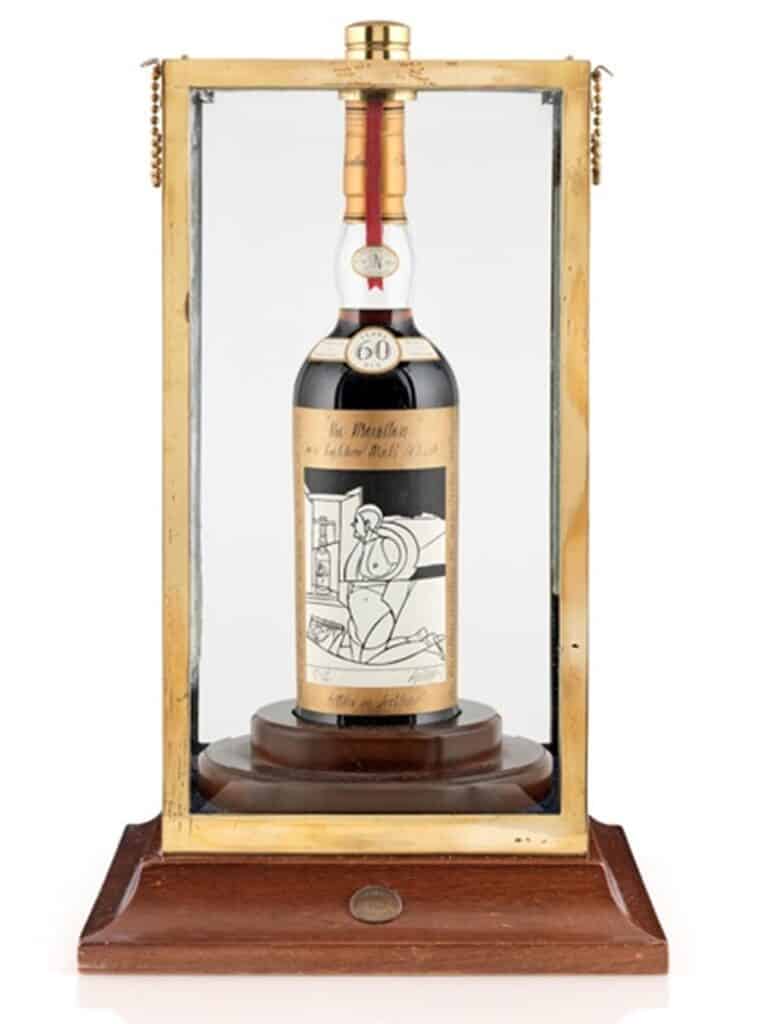 At a Bonham’s auction in Scotland in 2018, this bottle of The Macallan Valerio Adami sold for $1.07 million. It was a limited-edition bottle released with only 24 examples. Additionally, only half of those produced were labeled with Valerio Adami’s signature.

It was first casked in 1926 and bottled in 1986, after having been aged 60 years. To this day, it is considered one of the holy grails of Macallan whiskey collecting from one of the most infamous years the brand ever produced.

The Italian painter Valerio Adami was born in 1935, becoming a famous expressionist by the 60s until he began to experiment with more abstract genres, similar to French cloisonnism. This movement was marked by post-impressionist painting techniques warped by flat forms and dark colors. 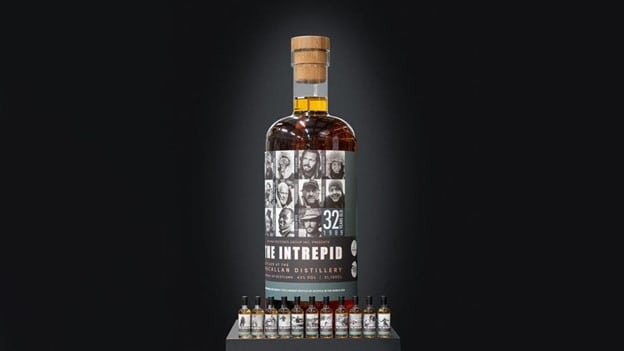 This bottle of Macallan whiskey was only aged 32 years, making it far from the most vintage drink on this list. What sets this apart, as you probably guessed, is the sheer size of the bottle, which is about 6 feet in height and contains 86 gallons of Macallan scotch whiskey. This is the equivalent of about 444 normal bottles of scotch.

The Guinness World Records certified this bottle as the single largest bottle of Scotch ever produced when it was bottled in 2021. It was sold in 2022 for $1.4 million, making it nearly the most expensive Macallan whiskey of all time.

The bidder who won this one-of-a-kind bottle at the auction decided to remain anonymous. It was sold by Lyon & Turnbull, the auction house based in Edinburgh. 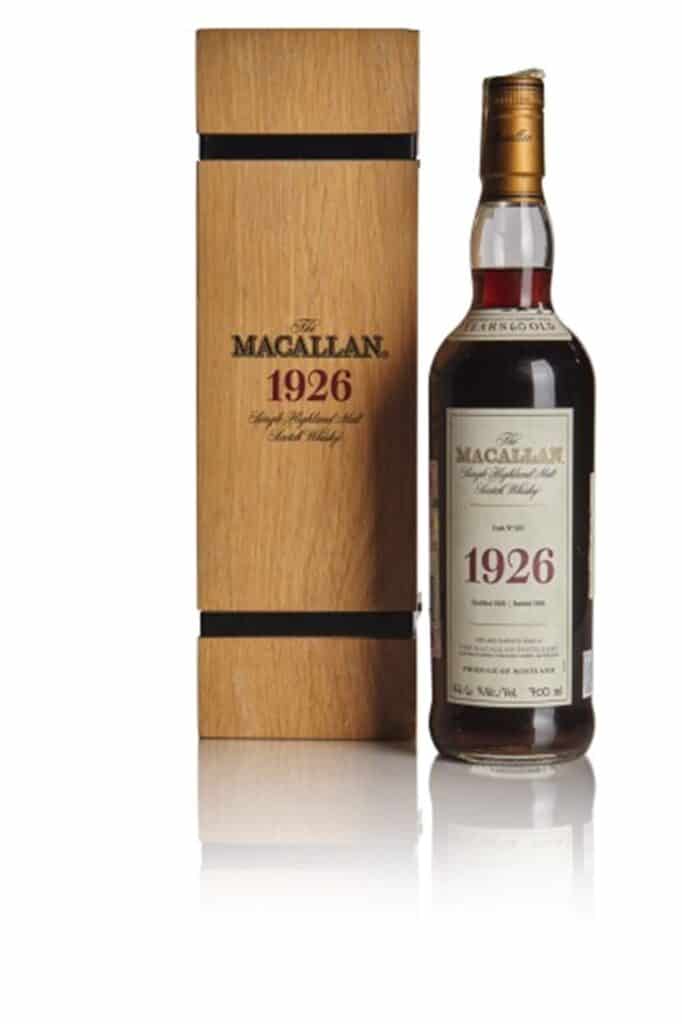 The most expensive Macallan is the Macallan 1926. This Scotch whiskey is from the most venerated of Macallan’s distilleries, the one that has produced the infamous 1926 batch of ultra-valuable Scotch. This particular bottle is 160 years old, finally being bottled in 1926 in the legendary cask 263.

At a Sotheby’s auction, this incredible bottle sold for $1,782,446.16, marking a new high point in the selling of vintage whiskey.

Only 40 bottles were drawn from cask 263, and of those 40 only 14 were labeled with this design. Other bottles from the cask have no labels while others have hand-painted labels.

8 Most Expensive Capodimonte Ever Sold

8 Unique and Rarest Octopus Species in the World