9 Most Expensive Bearbricks Ever Sold

Bearbricks are a Japanese toy brand by MediCom based on the Kubrick bear design. The figures are made from plastic or vinyl usually, but they can include cloth or metal as well. There are many sizes of Bearbricks, up to the 1000% scale. Each is articulated at the waist, head, and limbs.

These collectible figures have included collaborations from major fashion designers, artists, and brands.

The most coveted collaborations produce the most limited-edition figures, and these can sell for thousands. Continue reading to learn about the 9 most expensive Bearbricks. 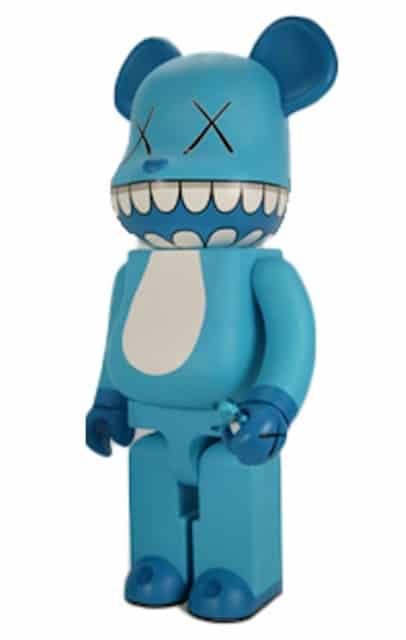 It was made in a collaboration between Avex Summer Festa, the Japanese music festival, and Brian Donnelly, the American artist known as Kaws. This figure’s iconic “X” eyes design and “Chomper” teeth are based on Donnelly’s art. This Bearbrick can sell for up to $14,200.

The artist/designer Kaws casts figurative characters, some of which go back to the 90s, most of which feature his famous “X” eyes. Many of his pieces of pop-art collectibles have been featured in public institutions and collected by famous celebrities like PewDiePie, Kid Cudi, Pharrell Williams, and Swizz Beatz. 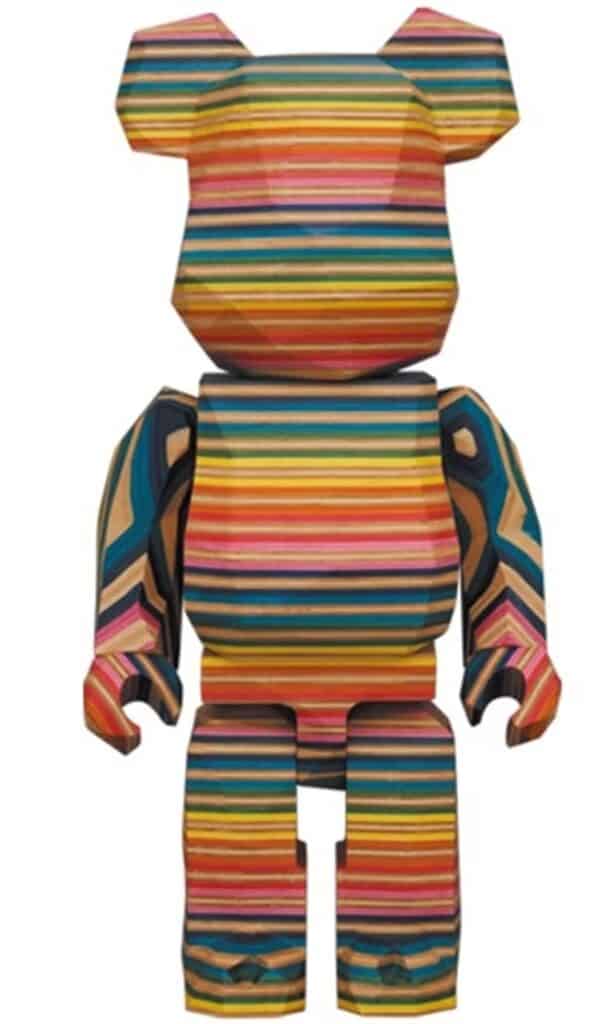 The Bearbrick x Fragment x Haroshi Karimoku (Polygon) 400% was released in 2021, making it one of the newest Bearbricks out there and the newest on this list. It originally retailed for $6,030, which is hefty for these vinyl figures. It was made in a collaboration between Fragment design, an imprint made by the Japanese designer, Hiroshi Fujiwara, and Haroshi Karimoku.

This rainbow-colored Bearbrick has a geometric design with no eyes or mouth and frequently sells online for as much as $18,899.99.

Haroshi Karimoku is a Japanese artist famous for his sculptures, primarily those made from recycled skateboards. He has designed buildings in the Tokyo area as well as art installations and MediCom toys like this Bearbrick. 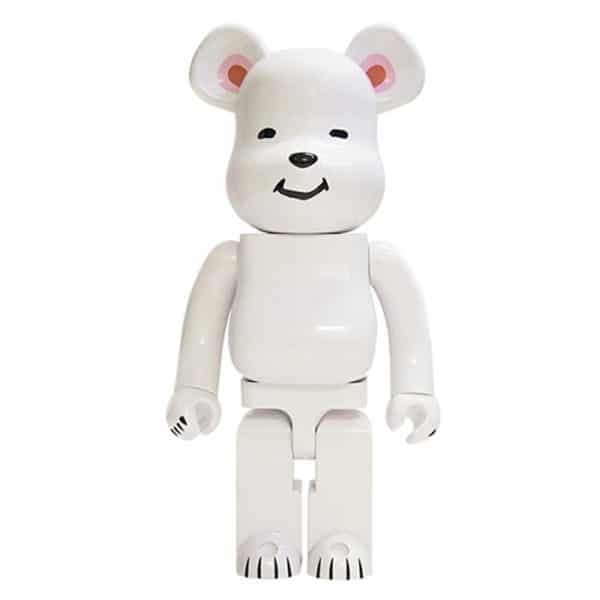 The Bearbrick x CLOT Polar 1000% is a vinyl figure from 2014, originally retailing for $619, which makes it one of the least expensive figures on this list as originally sold. This Bearbrick was designed by Edison Chen. Chen is a Hong Kong singer and fashion designer who was born in Canada, debuting with the Mandopop and Cantopop albums through Emperor Entertainment.

The face of this vinyl polar bear was drawn by Edison specially for this figure. It also has “I’m cold” printed on its legs, which is another reference to Edison. This Bearbrick was sold in a white box originally but now goes on the aftermarket for up to $19,699.99.

In the 2000s, Chen began appearing in films, starting with Dead or Alive 2: Birds. He then starred in the Hong Kong action film, Gen-Y Cops (2000), the crime films Infernal Affairs (2002), Infernal Affairs II (2003), and Dog Bite Dog (2006). He also had a small role in The Fast and the Furious: Tokyo Drift and a cameo as an unnamed receptionist in The Dark Knight. 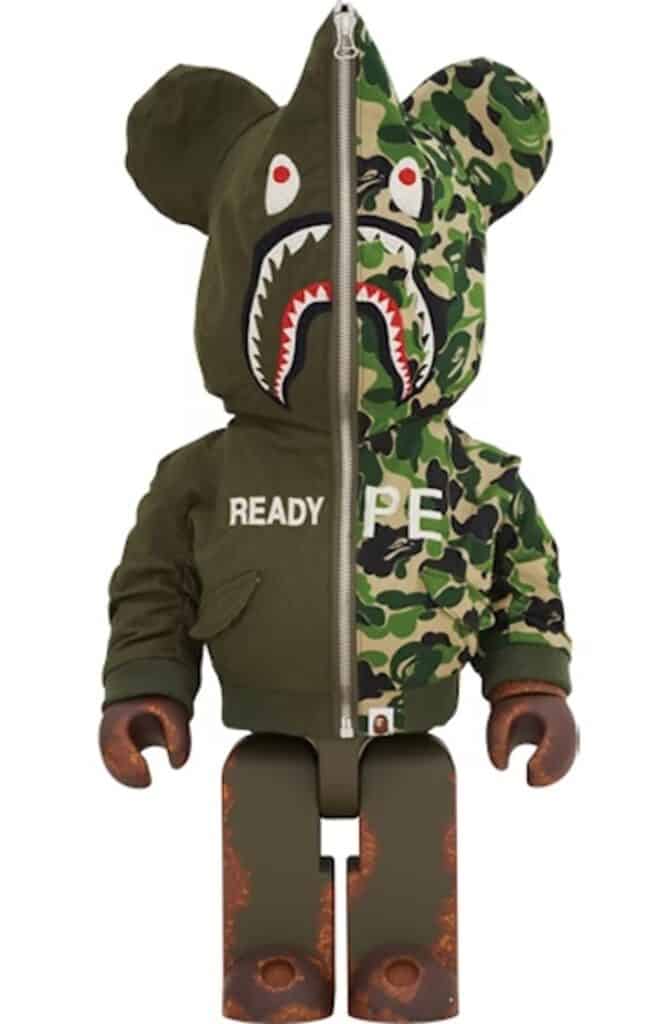 The Bearbrick x Readymade x A Bathing Ape 1000% Multi is one of the newer Bearbricks out there, releasing in August of 2018 for an original retail price of $2,480. The bear is half-brown, zipped up down the middle, and the other half is camo, signifying the two brands that collaborated on it, Readymade and A Bathing Ape.

Online, this Bearbrick can sell for as much as $20,799. The brand Readymade was founded in Japan in 2013 by Yuta Hosokawa, a fashion designer. The brand is known for converting military gear into upscale street fashion statements, made popular by Jay-Z, LeBron James, and others.

A Bathing Ape is another Japanese fashion subsidiary founded 20 years earlier in 1993. It was created by Nigo (the fashion name of Tomoaki Nagao), in Ura-Harajaku in Tokyo, Japan. They also have stores in Hong Kong, Shanghai, Paris, London, Miami, LA, and more. 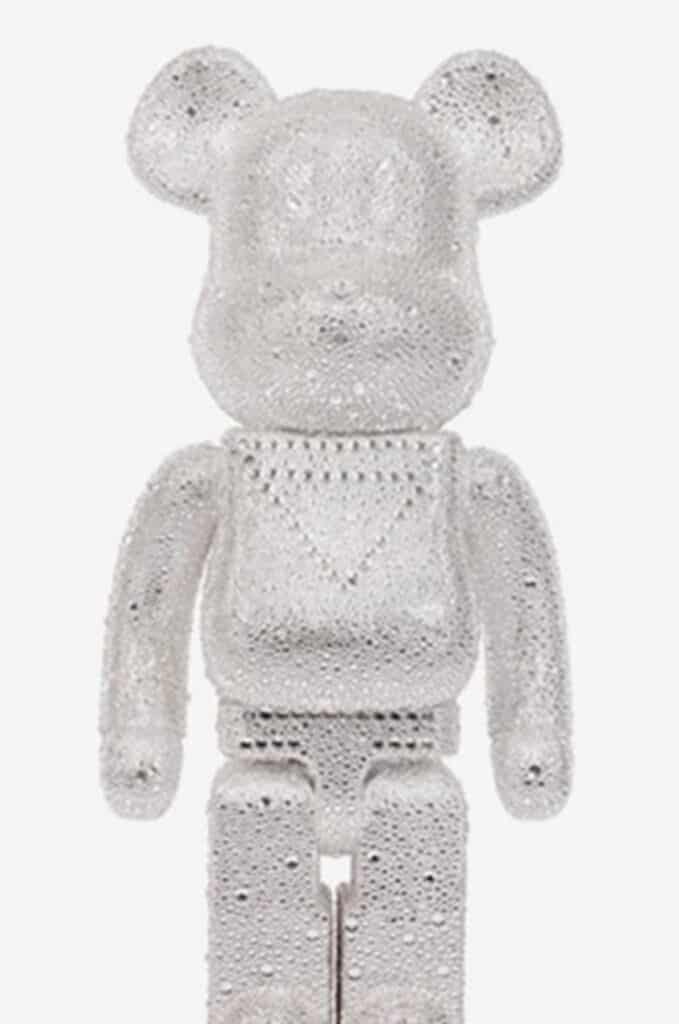 The Swarovski x Colette Bearbrick is in the 400% series, making them smaller than most of the priciest Bearbricks. This shiny white shelf-dazzler is completely plastered in glittering Swarovski crystals, giving it a unique palette and profile out of all the Bearbricks on this list.

This Bearbrick was released in 2009 for Colette’s Swarovski Exhibition. Swarovski is of course a major name in crystal manufacturing, with their highly durable, versatile crystals decorating jewelry, clothes, and furnishings for decades. The Bearbrick carrying their sparkly lineage has sold for as much as $22,180.

The Swarovski Exhibition by Colette included much more than this dazzling Bearbrick. It also featured the costume set for the Viktor & Rolf opera, other Swarovski figurines like Ingo Maurer’s Snowflake, Adidas Wings designed by Jeremy Scott, and a pink gold watch made by D:Light. 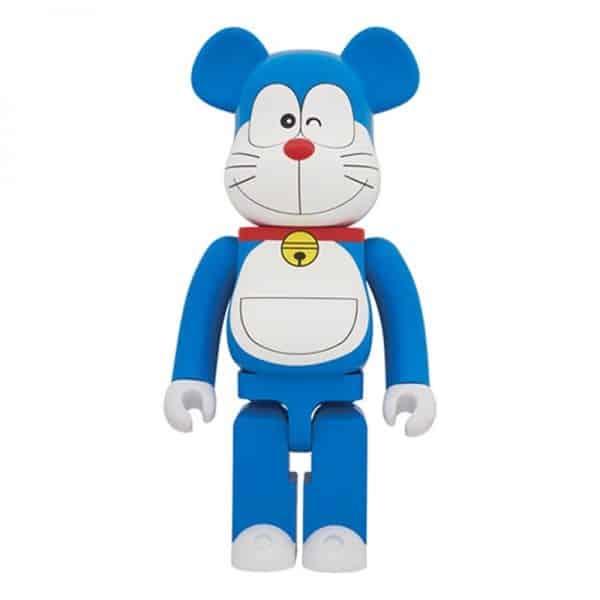 The Bearbrick World Wide Tour 2 Doraemon 1000% was released in October 2012. It was made as part of the Worldwide Tour Souvenirs based on the popular Japanese character, Doraemon, but the series includes figures and characters from all over. These include the Bunny by Fragment, the Reverse Model, Muveil Osaka, Karimoku, and Mickey Mouse.

This Bearbrick sells online for as much as $27,999.99 online, a testament to the character’s popularity.

Doraemon is a character originally from a manga series first published in 1969. He’s a robot cat who time travels from his era in the 22nd century and befriends a Japanese boy. After the manga, there have been three anime series from 1973, 1979, and 2005. 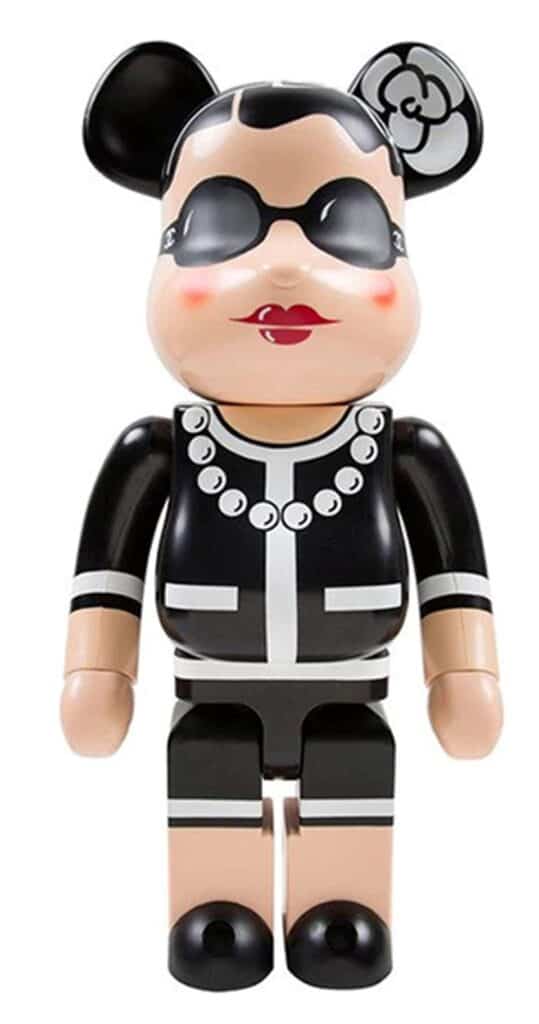 The Bearbrick Coco Chanel 1000% Multi was made in a collaboration between Bearbrick and Coco Chanel, released in 2007. It originally retailed for $2,500 and now sells online for as much as $32,999.99. An example of this vinyl figure still in its original box sold in November 2019 at a Christie’s auction for 237,500 HKD, though they can sell for more.

Only 1,000 editions of this Bearbrick were made. The black and white suit, round sunglasses, and lipstick on this Bearbrick are designed to emulate Coco Chanel, the fashion brand’s famous female founder.

Gabrielle Bonheur Chanel is known as Coco, the queen of the Chanel fashion brand. It’s famous for inventing many modern female fashion trends post-WWI. The Chanel pantsuit and Chanel No. 5 are famous examples of her trend-setting products. 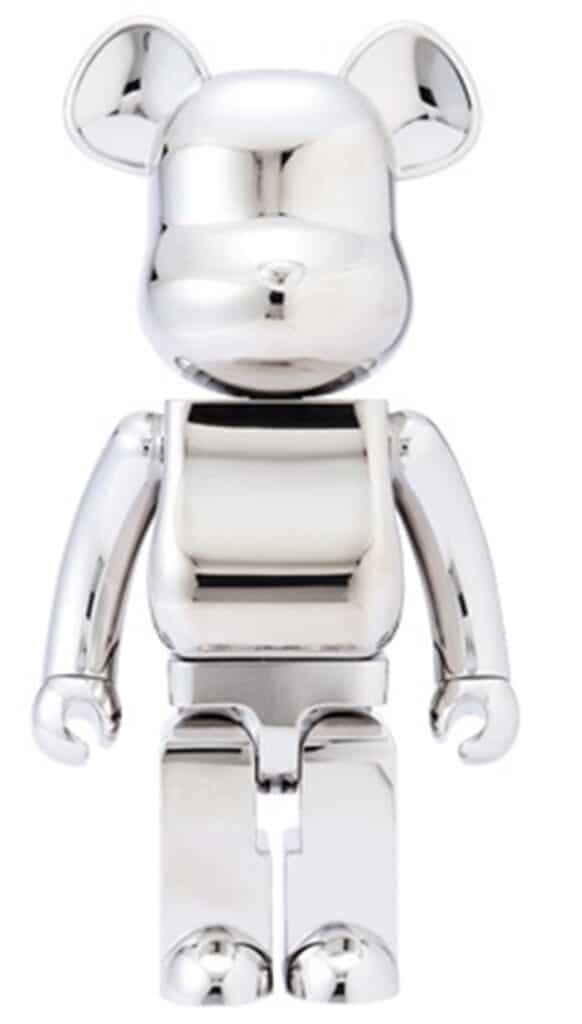 The Black Sense Market x Medicom Toy 1000% Stainless Steel Bearbrick was made to celebrate the anniversary of SENSE magazine. Unlike most Bearbricks, this one was made from stainless-steel and released in the 1000% size, which is the brand’s biggest commercial release.

This Bearbrick was released in October of 2009 through the store, The Contemporary Fix, and originally retailed for the Japanese Yen equivalent of $58,000.

The Contemporary Fix is a clothing retailer located in Fujii Daimaru in Kyoto, Japan. SENSE Magazine, meanwhile, was an LA-based fashion magazine that circulated bi-monthly to about 135,000 subscribers from 2007 until it was discontinued in 2009.

The two brands collaborating on a Bearbrick just goes to show how fleeting and collectible they can be since that combo is unlikely to ever happen again. 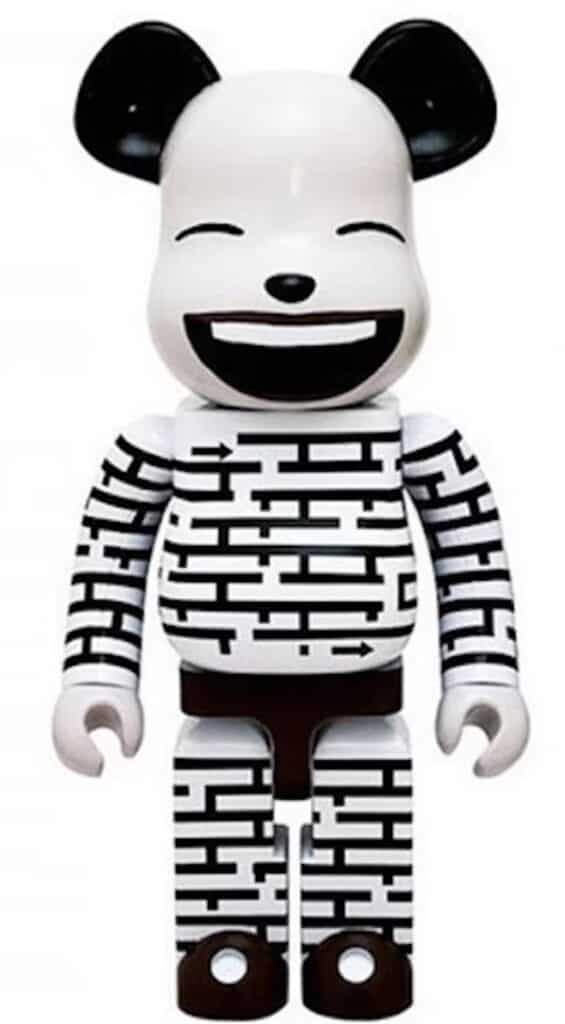 The most expensive Bearbrick is the Yue Minjun “Qiu Tu” 1000% Bearbrick. This black & white Bearbrick was a one-off design by the Chinese artist, Yue Minjun. It was sold at an auction for over $149,000 after debuting in 2008.

Yue is famous for depictions of laughter, which this Bearbrick emulates with its face frozen in permanent happiness. His paintings are often laughing so hard, their smiles are jaw-breaking, combining happy elation with some kind of inner ironic despair. The most famous depiction of this smile is actually a self-portrait.

Yue is a prominent figure in the Chinese art movement known as Cynical Realism, which defined many of the country’s famous paintings in the 1990s. The movement was inspired by artists striving for individual expression ever since the lessening of collective Communist influences during the Cultural Revolution. Other prominent artists in the movement include Liu Wei and Fang Lijun.