Hasbro has been producing Star Wars: The Black Series (TBS) Action Figures for more than nine years. Hasbro announced the launch of the Star Wars Black Series in January 2013, and the first figures were released on August 1, 2013. It was the time when the hype around the release of the seventh film in the “Skywalker Saga” Star Wars: The Force Awakens was gaining momentum.

The popularity of the character, availability, design, and packaging are some of the common aspects that often influence the price.

Here we list 9 of the most expensive Star Wars Black Series Action Figures sold on various platforms. The list is made based on the average price of the figures in the aftermarket. 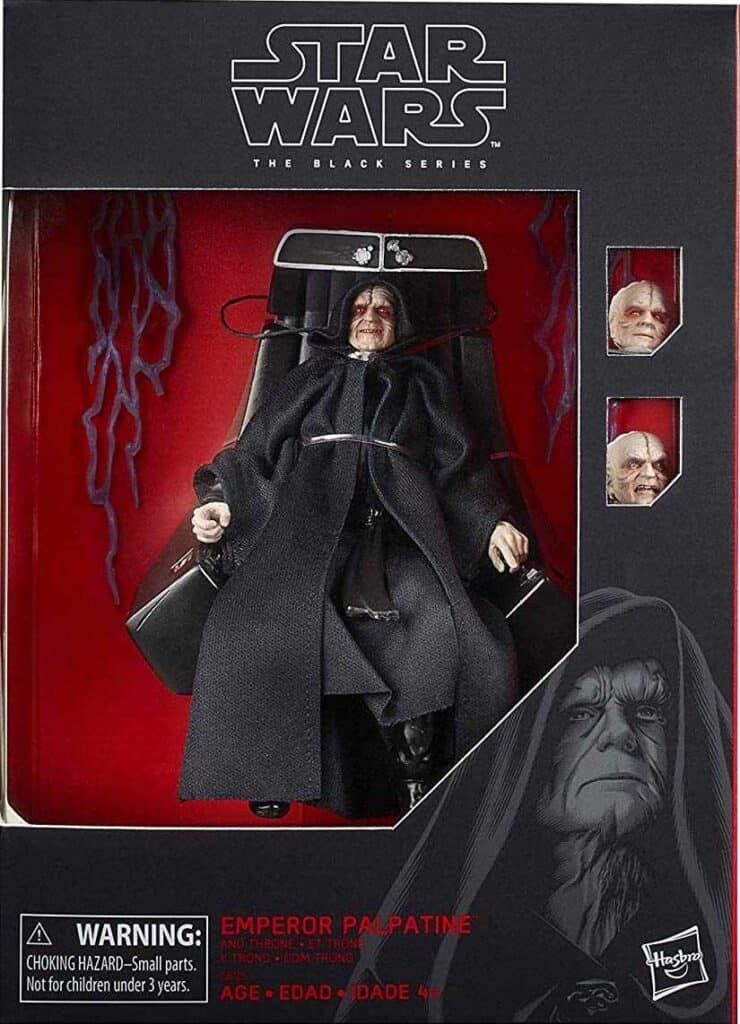 Emperor Palpatine is a popular Star Wars character. The Emperor Palpatine with Throne Black Series figure was released in 2019 and was inspired by his appearance in the Return of the Jedi. It was an Amazon-exclusive release.

Unlike other Black Series Amazon Exclusives, this figure disappeared quickly from the platform, and within months the price of the figure skyrocketed.

After the release of the Return of the Jedi, the character of Palpatine became a widely recognized symbol of evil in pop culture. It is the only possible explanation of why the price of this figure drove up so quickly. However, it left the fans baffled why the figure disappeared from the primary market so soon. 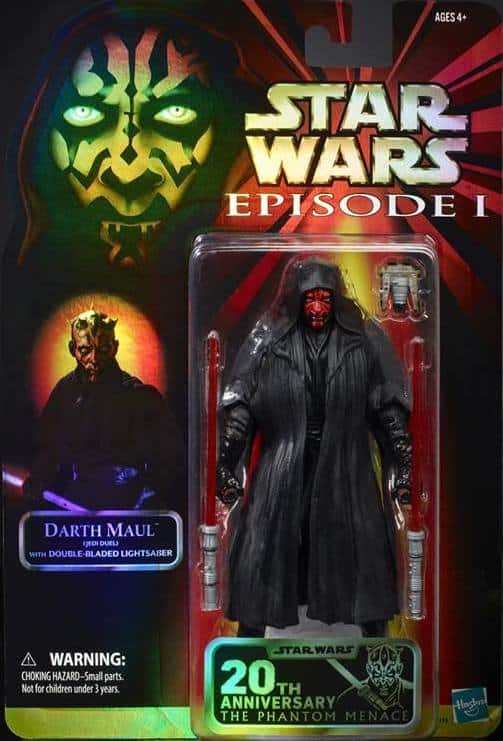 The Darth Maul (Duel of the Fates) action figure released in 2019 was a redesigned version of 2013’s Darth Maul figure. The package included an alternate head, original accessories, and a lightsaber.

This action figure was released to celebrate 20 years of Star Wars: Episode 1, The Phantom Menace. The packaging was retro-styled to pay tribute to the episode released in 1999.

The figure was first officially revealed at Hasbro’s Entertainment Brand Preview Event at the 2019 New York Toy Fair. It was available as a Star Wars Celebration Chicago 2019 exclusive. The figure was available online for a brief period on May 4, 2019. Later, the figure was released in the mass market as part of the second assortment of The Black Series Archive collection.

A figure of Darth Maul’s Duel of the Fates counterpart Obi-Wan Kenobi was also released on the same occasion. 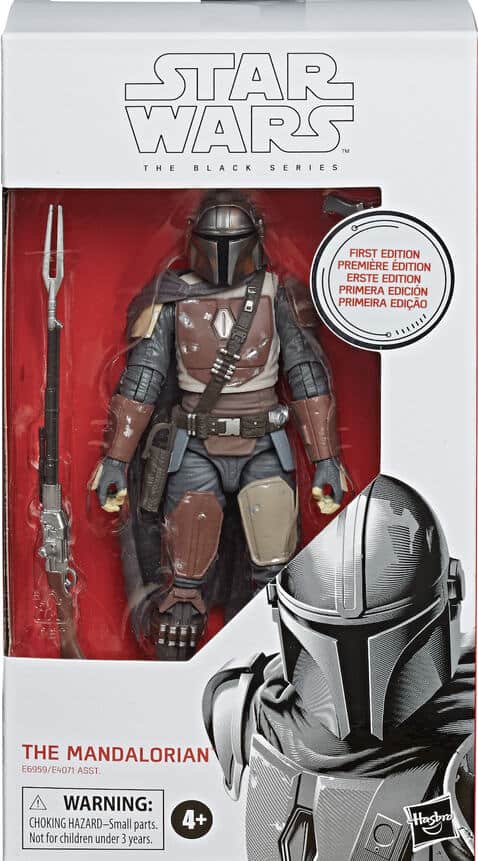 The Mandalorian (First Edition) Black Series figure consistently fetches a higher price in the secondary market. The figure was designed after the character’s appearance in the TV Series The Mandalorian and came in a special white box packaging.

The figure was launched around the same time when the TV series premiered with the launch of Disney+.

George Lucas, the creator of Star Wars wanted to develop a live-action Star Wars television series back in 2009. However, after he began developing the series, it was deemed too expensive, and the project was shelved. Finally, the first live-action series in the Star War franchise, The Mandalorian, was produced by Disney in 2019. 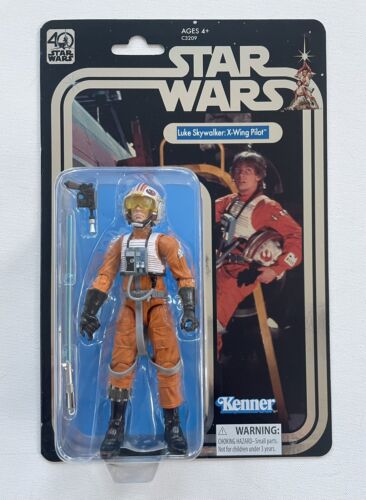 Luke Skywalker (X-Wing Pilot) was revealed on February 15, 2017. It was released to celebrate the 40th Anniversary of Star Wars. This exclusive Black Series figure was primarily available to the fans who attended the Star War Celebration Orlando held between April 13 and 16, 2017.

Fans from all corners of the world attended the event, and all copies of Luke Skywalker (x-wing pilot) were quickly sold out in the event. Later, a few copies were made available online.

Luke Skywalker (x-wing pilot) was one of the first Black Series action figures ever made by Hasbro. This exclusive one was a slight repaint of the original figure released in 2013. The other characters released in the first phase were Darth Maul, Sandtrooper (Squad Leader), and R2-D2. 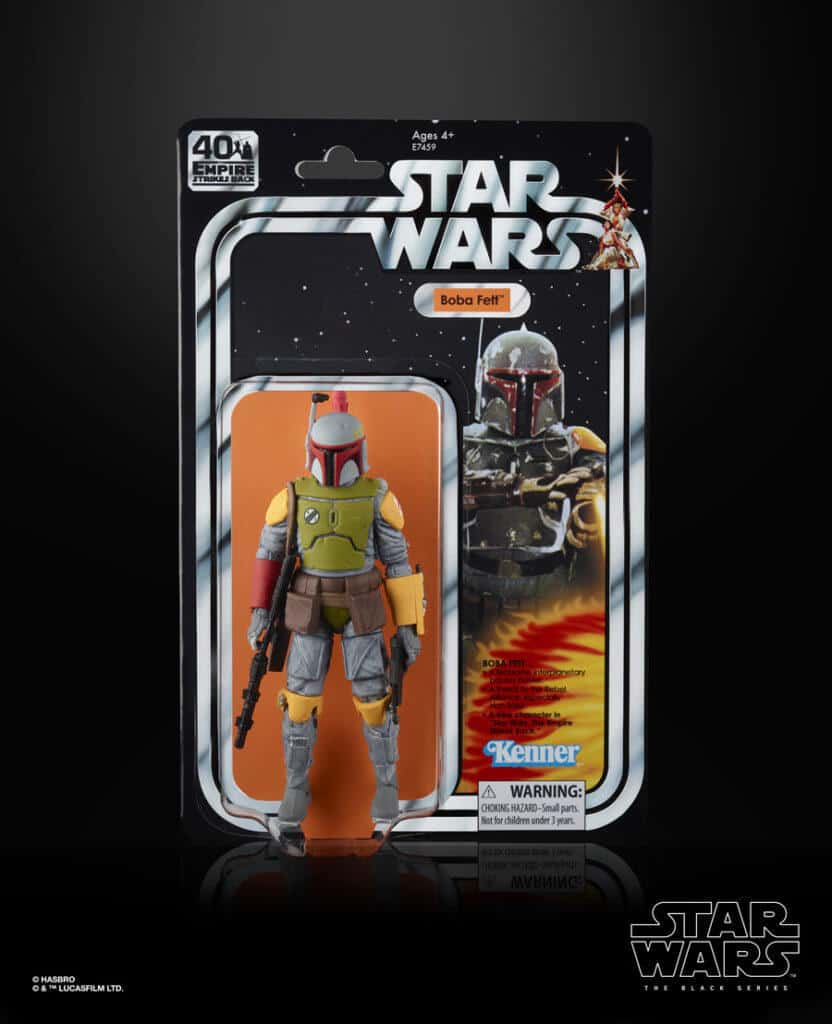 This exclusive Boba Fett figure was released at San Diego Comic-Con 2019. It was also offered through EB Games at the Canada Fan Expo that year. Later, a limited quantity of this exclusive figure was made available through the Hasbro Pulse website.

This figure was a throwback to classic Kenner toys. The retro color scheme was used in the painting design. Additionally, the cloth cape was replaced by an E-11 Blaster to replicate the Kenner design.

Kenner launched a Boba Fett figure as early as 1979, even before the release of Star Wars: The Empire Strikes Back, where the character appeared. The design was based on the photos taken during early costume tests. 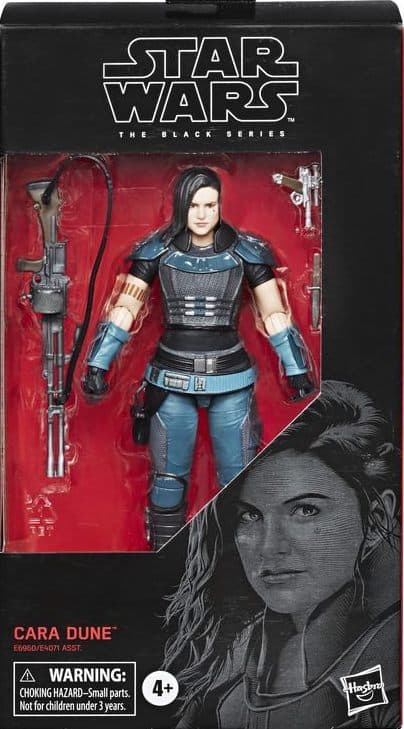 The Cara Dune action figure was inspired by the look of the character in The Mandalorian. It was a part of Wave 23. The figure was first revealed on September 26, 2019, during the Triple Force Friday Livestream event. The shipping began in late October.

The character of Cara Dune appeared in the first two seasons of the Disney+ television series The Mandalorian. Star Wars describes her as “A veteran of the Galactic Civil War who fought under the banner of the Rebellion, Cara Dune is a seasoned warrior who hails from Alderaan. After the fall of the Empire, she reinvented herself first as a mercenary and most recently as the Marshal of Navarro.”

The character of Cara Dune was played by former mixed martial artist Gina Carano. In February 2021, she was fired by Disney+ for her multiple insensitive posts on social media. Hasbro canceled her action figures immediately after. The controversy drove up the price of the figure. 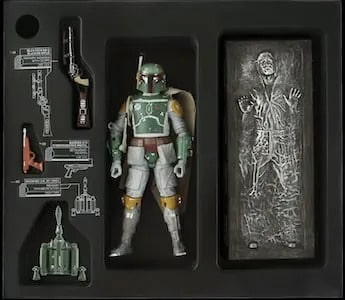 A Boba Fett figure with the same design but different paint was released as part of the second wave of Black Series figures.

Jabba the Hutt’s Throne Room set was exclusively released at the 2014 San Diego Comic-Con. Later it was made available to the attendees of the Jedi Con, held in Düsseldorf, Germany. A limited quantity was also put up on HasbroToyShop.com.

The set included a Jabba the Hutt deluxe action figure, an exclusive Salacious Crumb, a backrest, and a bong. The action figure was later released in the mass market without the other accessories featured in the set.

Rebelscum.com, a website covering news on Star Wars toys and collectibles, organized a giveaway right after the 2014 San Diego Comic-Con. To win the Jabba the Hutt’s Throne Room on this site, fans were required to leave a contributing comment on a story or photo archive gallery posted on the site with the hashtag #Jabba Jabba Hey!

The Walmart Mexico exclusive four-pack set is the most expensive Black Series figures set ever sold. In an auction on eBay, it fetched a whopping $659.99. The set includes action figures of Han Solo, Princess Leia, Boba Fett, and Greedo.

The set was released in October 2015 and was exclusively available in Walmart Mexico. Only a very limited number of sets later entered the US aftermarket and sold at a higher price.

Start Wars Black Series is often considered the best toy line in the history of the franchise. The detailing in the design of these figures is mind-blowing.