10 Most Expensive Pool Tables in the World

Pool has roots in the 15th century in Europe. Early forms of the game were played outside, similar to croquet. Players would hit balls around the lawn, aiming for targets and competing against rivals. The game turned into an indoor sport, and it was typically played by nobles or other rich and powerful people.

The new, indoor version of pool changed how people played. “Tables originally had flat walls for rails,” says one report, “They resembled river banks…Players discovered that balls could bounce off the rails and began deliberately aiming at them.”

Pool tables usually cost between $1,000 and $3,000, but some are way more expensive. Antique designs, rare materials, and custom features make some pool tables sell for over a million dollars!

Learn more about the world’s most expensive pool tables with this list! 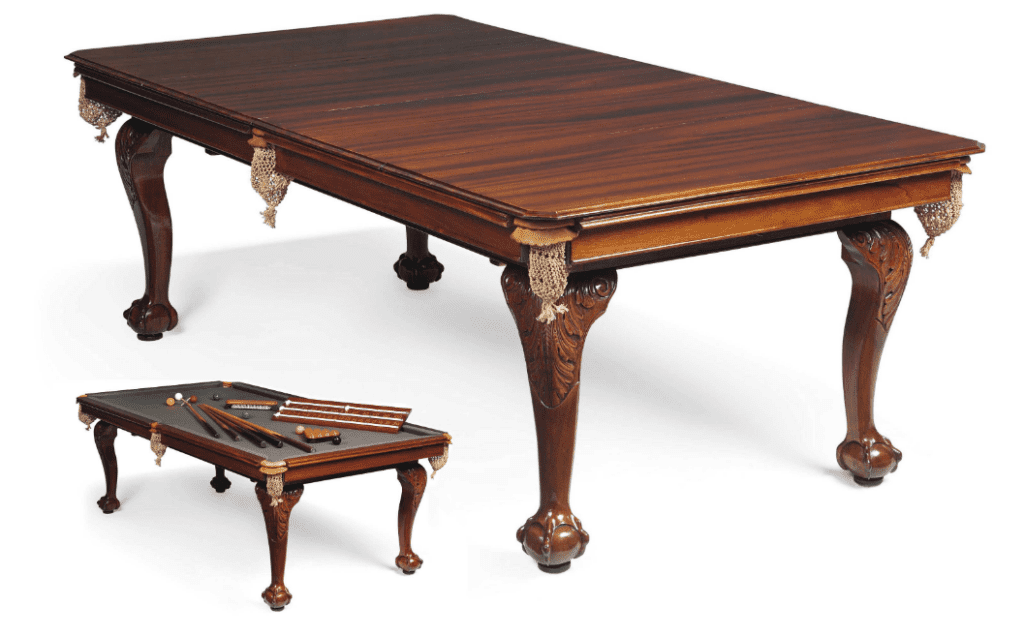 First up is this Edwardian mahogany pool table made during the early 20th century. The innovative design combines leisure and dining, with a removable top transforming the pool table into a dining table. The design is made of real mahogany and features a label inscribed “W. JELKS AND SONS BILLIARD TABLE BUILDERS 263/275 HOLLOWAY ROAD LONDON N.”

Christie’s auction house sold this unique pool table in 2011 for the equivalent of about $6,900.

According to Christie’s, this pool table was reportedly made for Barton Court of Abingdon, Berkshire, a historical manor in England near the River Thames. 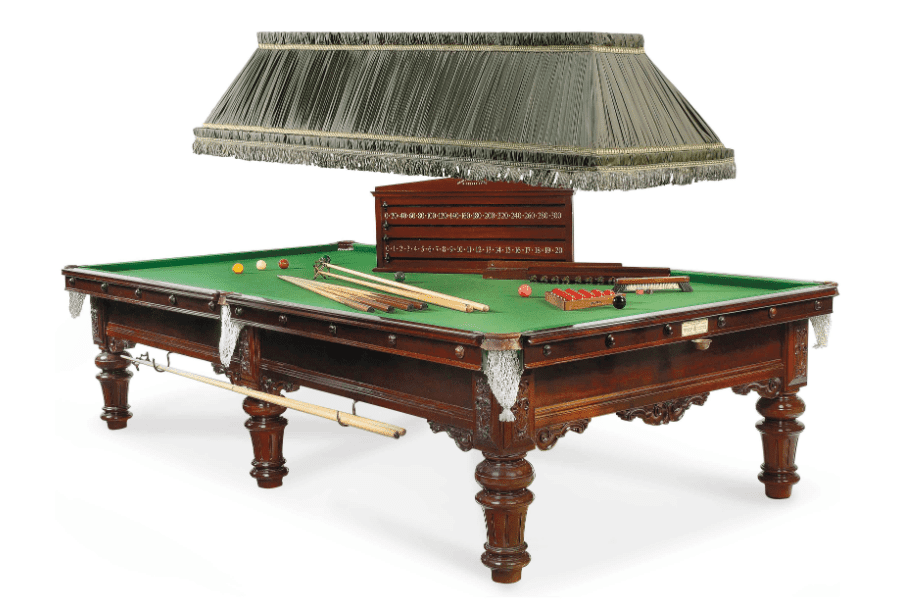 Thurston & Co. Ltd. was founded in 1799 and still operates today. The company makes a variety of games and sports equipment, including table tennis, bingo, and (of course) pool.

This pool table is an example of Thurston’s earlier work. The design was crafted in the early 20th century and features a beautiful combination of mahogany and ivory inlays. Christie’s auction house sold it alongside an original scoreboard and other accessories in 2011.

After lively bidding, this table earned about $13,700 — making it one of the most expensive pool tables in the world.

This pool table was reportedly restored by Hamilton & Tucker Billiard Co. according to an inscribed label on the body. 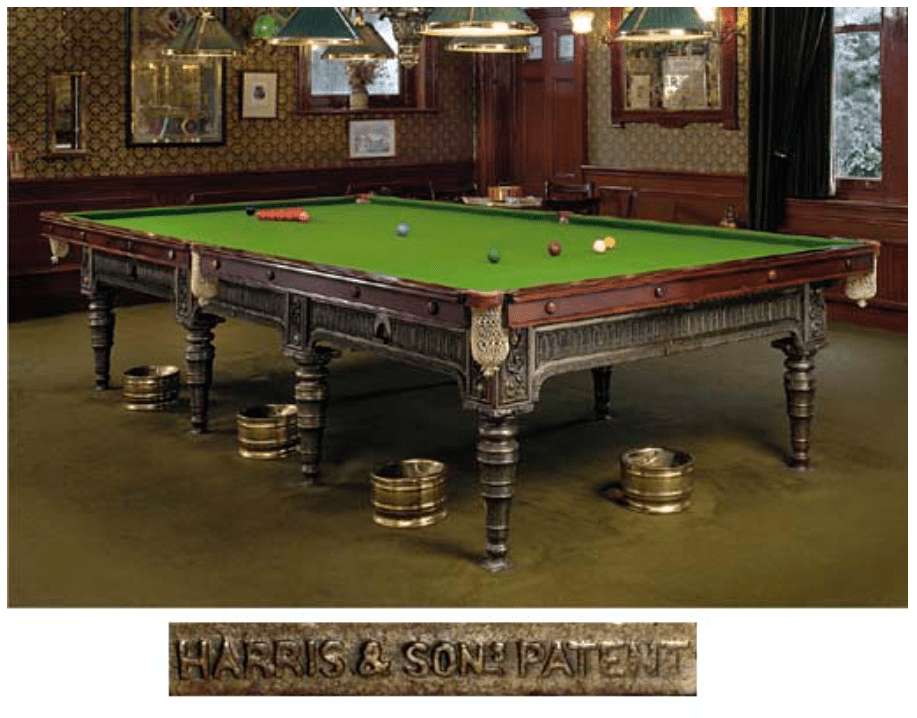 Harris & Sons was a manufacturer operating during the late 19th century. Around that time, the company made this cast iron pool table. The unique material choice makes it particularly heavy, but the design is relatively similar to more standard pool tables.

Ornamental details are found along the legs and body, while the pockets feature a carefully crafted lattice-like design.

Christie’s auction house sold this heavy Victorian-era pool table in July 2005. The auction house expected the table to sell for GBP 10,000 at most, but it ended up going for the equivalent of about $15,200 — way over the estimate!

This pool table was sold with several accessories, including cues and a 19th-century game rules handbook. 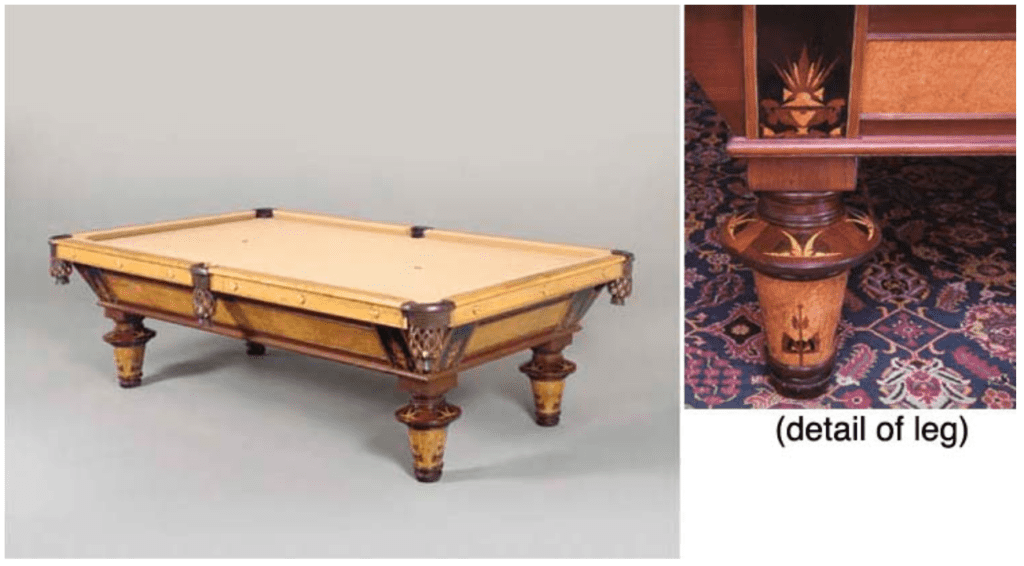 Reports don’t say who made this table, but the craftsmanship is stunning. Maple, mahogany, and birch come together to form the wooden body. Next, marquetry is applied.

According to experts, this pool table was made at some point during the 19th century. The beautiful piece of pool history was sold in September 2003 for a whopping $16,730.

According to The Wood Database, there are many types of mahogany — and they vary significantly in price and quality. “True” mahogany is the most expensive since it’s very rare. 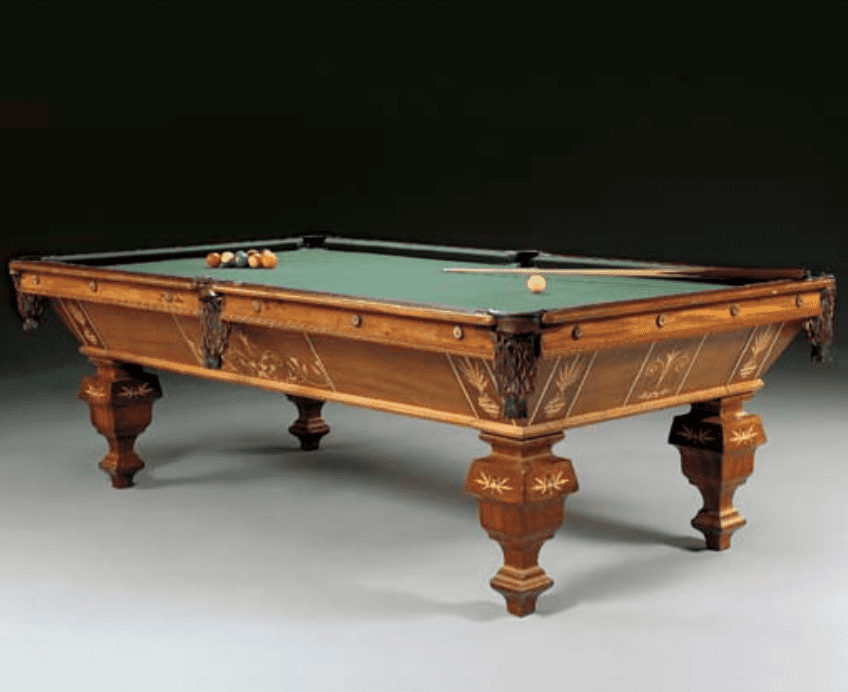 This antique mahogany pool table is probably an antique. Information is limited, but the design was reportedly crafted by the August Jungblut Company of San Francisco.

Other pool tables made by the company are dated to the late 1800s, so it’s likely this pool table was also made around that time.

Christie’s auction house sold this table in 2002. The beautiful design features inlaid American maple details and leather pockets. Selling for nearly $30,000, this is the sixth most expensive pool table in the world.

This pool table was sold alongside 11 cues in their stand. 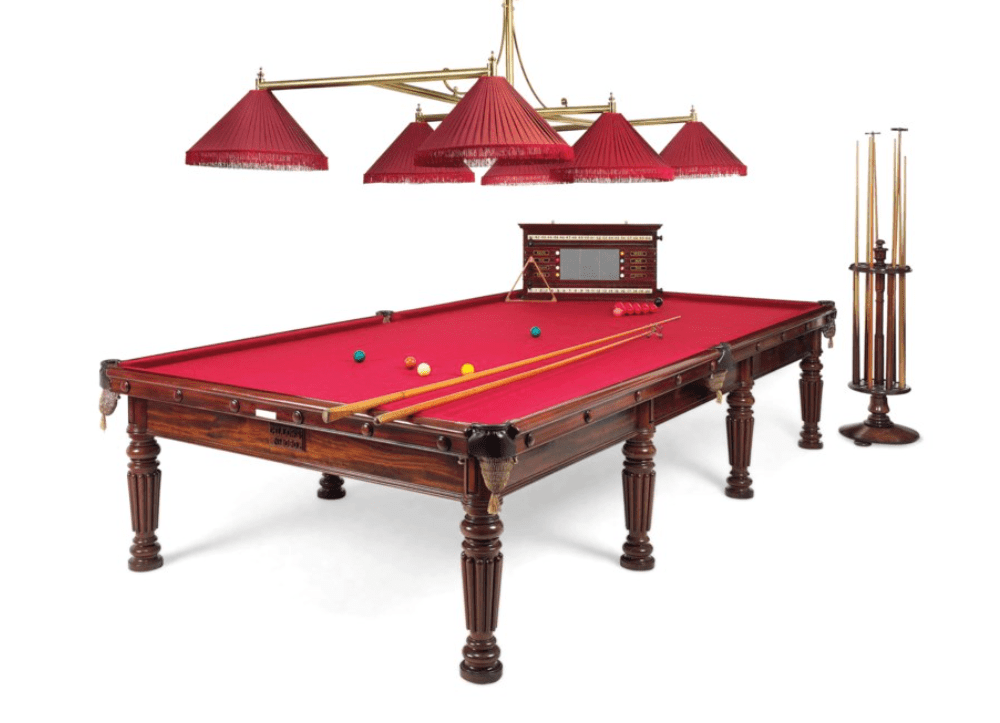 Gillows was a London-based furniture company operating during the 19th century. The business made only a limited number of pool tables each year, so they’re quite rare today.

This particular example was built around 1830 to 1840. The design features a mostly mahogany body with ivory details and beautiful wood carvings.

Christie’s auction house sold the antique in the spring of 2014. The auction house expected the table to fetch GBP 14,000 at most, but it ended up selling for the equivalent of about $74,000, becoming the world’s fifth most expensive pool table.

This pool table was sold with original cues and balls. The table was signed and numbered by the maker. 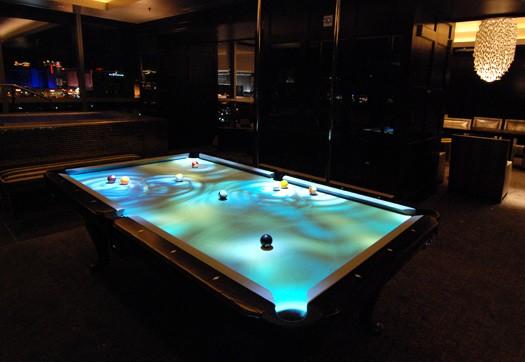 Pool might be an old game, but that doesn’t mean it’s stuck in the past. Obscura makes a high-tech version of the classic game using sensors and light machines.

Projectors are staged above the table while sensors track each ball and the cues. As components move around the table, the lights and sensors work together to make a flashy interactive effect. The cool visuals can be seen on video.

Obscura charges $80,000 for this unique and modern pool table. Would you buy one?

The Cuelight can use a variety of visual settings. One option makes it look like the balls are moving through water, another adds interesting color patterns depending on interactions with the sensors.

3. The Sinfonia Artistic Table by Cavicchi 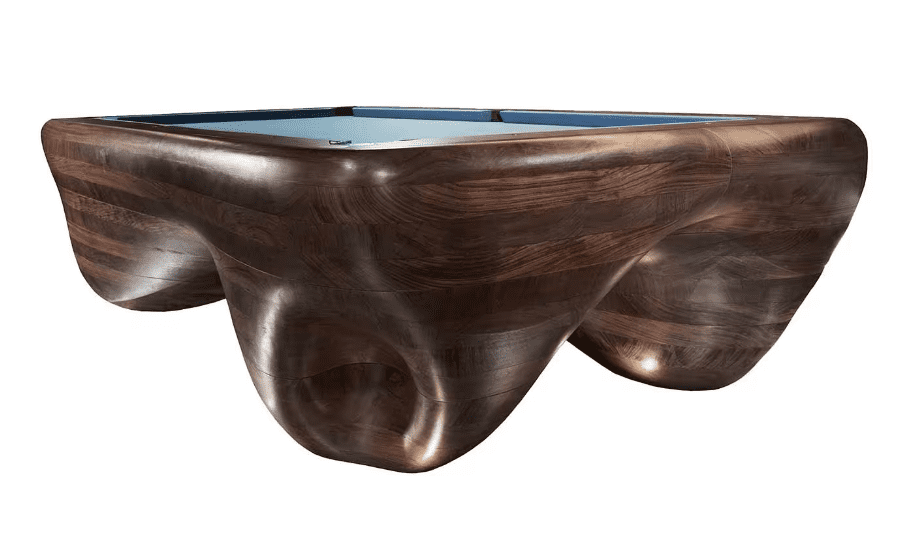 Bubinga is a rare African hardwood sourced from trees that grow about 150 feet tall. Because of its appearance, the wood is sometimes called African rosewood. Rosewood is very expensive, so Bubinga is a popular and slightly cheaper alternative.

This unique pool table is made of Bubinga wood by artisans in Italy. The handmade design is limited-edition, with just 268 units in existence. Each table sells for nearly half a million dollars, making this one of the world’s most expensive pool tables!

Bubinga could go extinct. Two of three varieties are included on the IUCN Red List of endangered species, while the third is considered near threatened.

Benjamin Hulbert was a billiards/pool table-maker living in Sydney, Australia during the 19th century. Starting in 1883, Hulbert began an ambitious new project: a table depicting parts of Australia’s history and wildlife. The table was complete after two years of hard work, and Hulbert had a masterpiece on his hands.

Made of Tasmanian blackwood, this exceptionally unique pool table features intricate carvings conveying key elements of Australia as a nation: “Colonial conflict, gold mining, [and] the Burke and Wills expedition.”

Hulbert didn’t make this table all by himself. “It features 10 exquisite high-relief panels, by master wood carver George Billyeald,” says the Australian government. The nation’s national museum acquired the piece of history in July 2022 for just over $1 million, making it the world’s second most expensive pool table.

The Australian office of the Arts says this is the only carving by George Billyeald held in an Australian public collection. 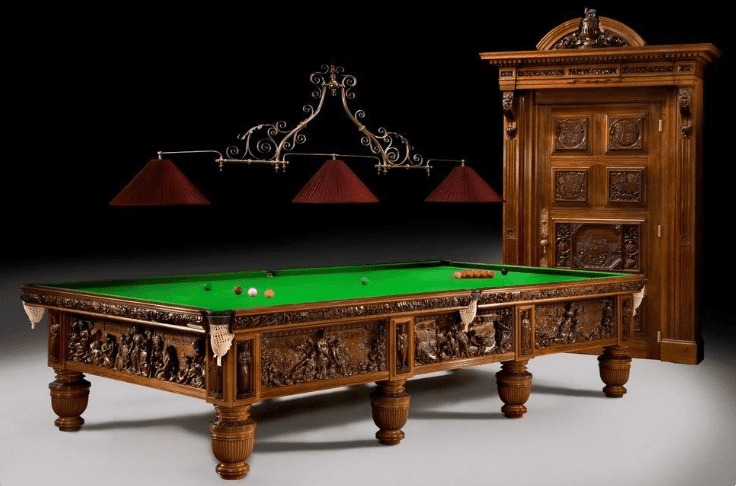 Queen Victoria’s Jubilee Exhibition Table is the most expensive pool table in the world.

At number one is Queen Victoria’s Jubilee Exhibition Table. The one-of-a-kind pool table was made in 1887 by Orne & Sons Ltd. using carved wood and fabric. As one of the world’s leading pool table makers, Orne & Sons became the Crown’s official table manufacturers in 1845.

Around 2009, Harrods sold the royal pool table for $1.6 million. The handmade design was sold alongside a matching cupboard with carvings depicting Queen Victoria’s reign.

Before they were sold, this pool table and cupboard were fully restored and repaired to meet showroom condition standards.