8 Most Expensive N64 Games Ever

From when it debuted on June 23, 1996 to when it was discontinued in April 2002, the N64 was both a gamechanger and a disappointment. Despite pioneering polygonal 3D graphics and several games that people still consider some of the best ever, the console undersold compared to Nintendo’s expectations and its competition.

For collectors, underselling can be a great thing though since it means lower circulation and higher values. Here are the 8 most expensive N64 games that you can currently collect. 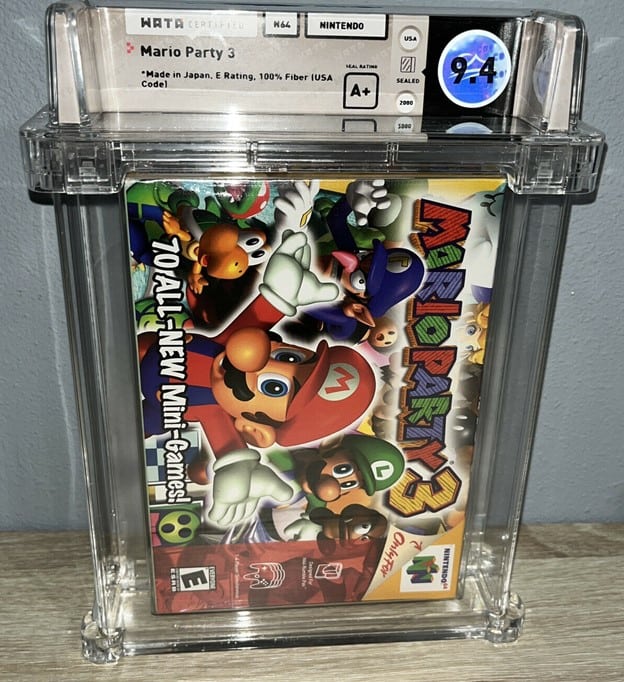 To kick off this list of expensive N64 games, Mario Party 3 comes in selling new and in pristine condition for $3,405.50. This copy was Wata certified 9.4, which is in incredible mint condition, practically right out of the factory, still sealed.

The game was the last Mario Party on the system, released in December 2000. Despite the obvious use of Nintendo’s flagship characters, the game was actually developed by Hudson Soft, the now-defunct company famous for the Bomberman, Bonk, and Adventure Island games.

WataGames is a company of expert quality graders who use industry expertise to give collectors the most accepted rating for the conditions of their games. Wata 9.4, also known as A+ or “Super Mint,” is practically as high a rating as you can get. Many N64 games were lower than Wata 9.4 condition before they even left the store shelves! 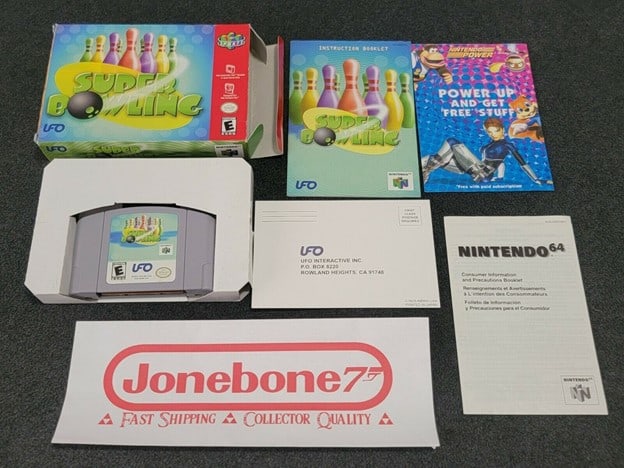 Super Bowling is by far the least acclaimed game on this list in terms of gameplay. The game was developed by the Japanese developer, KID, more famous for action games in the early Nintendo era such as Low G Man, Burai Fighter, and Summer Carnival ’92 Recca, a vertical shoot-em-up and one of the most oddly named games ever.

For Super Bowling, they created a game that remained so obscure that a complete copy is now worth thousands. This is in contrast to the games on this list that are valuable in sealed condition because of how popular they were. A complete copy of Super Bowling, not even sealed, was sold earlier this year for $3,799.99.

Super Bowling was not originally an N64 game. It was first released by KID on July 3, 1992 for the Super Nintendo. This version is the 3D remake. 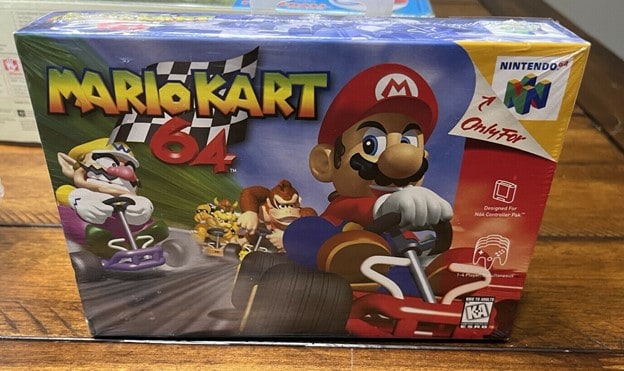 Mario Kart 64 may be a sequel to Super Mario Kart, but it is now the model on which all kart racing games are based. This game, which came out early in the lifespan of the N64 in 1996, has been re-released many times, showcasing Mario, Wario, Bowser, and more as they took a break from being antagonists in their games and opted to antagonize each other on the track instead.

Boasting 4-player split-screen action, this game was the killer app for parties on the N64. A new 1st printing of this game certified by Wata sold for $3,950 earlier this year.

Super Mario Kart utilized Mode 7 graphics, which allowed scanlines to reload images at different perceived distances, giving the illusion of perspective, such as in a cart race or flying game. The switch from Mode 7 to true 3D allowed Mario Kart 64 to do a ton of new stuff, such as create tracks with different elevations, pitfalls, walls, and more. However, the sprites in the game, such as the characters and items, were still 2D, pre-rendered into the 3D environment. 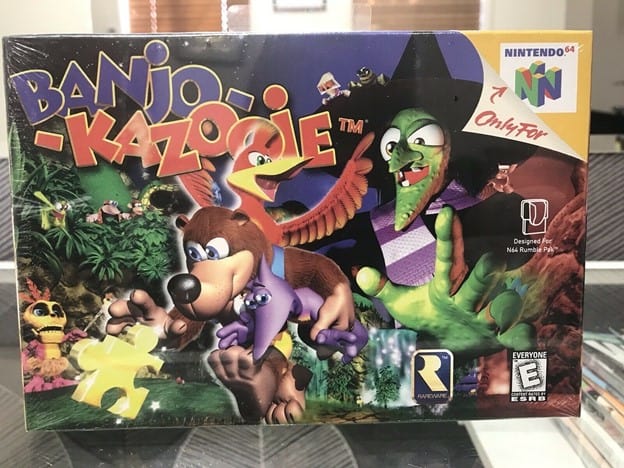 Before it became the subject of controversy over its anticipated yet underproduced sequels, Banjo-Kazooie was one of the most popular games on the N64 that was not developed by Nintendo. This game by Rare, the company behind Conker’s Bad Fur Day, Perfect Dark, Donkey Kong Country, and more, is a collectathon platformer in the vein of Super Mario 64.

A perfect specimen of the game, still new and sealed in the box, sold on eBay recently for $7,545, which would have made it just nudge out the Italian plumber for this spot on the list. However, the buyer never paid, so the game was relisted for its current asking price of $6,861.

Banjo was originally a bonus character in Rare’s Diddy Kong Racing (1997) before getting his own game. The Banjo Kazooie series currently has four games, including Banzo-Kazooie, Banjo-Tooie, Banjo-Kazooie: Grunty’s Revenge for the GBA, and Banjo-Kazooie: Nuts & Bolts. A spin-off kart racer for the GBA was released in 2005 called, Banjo-Pilot. 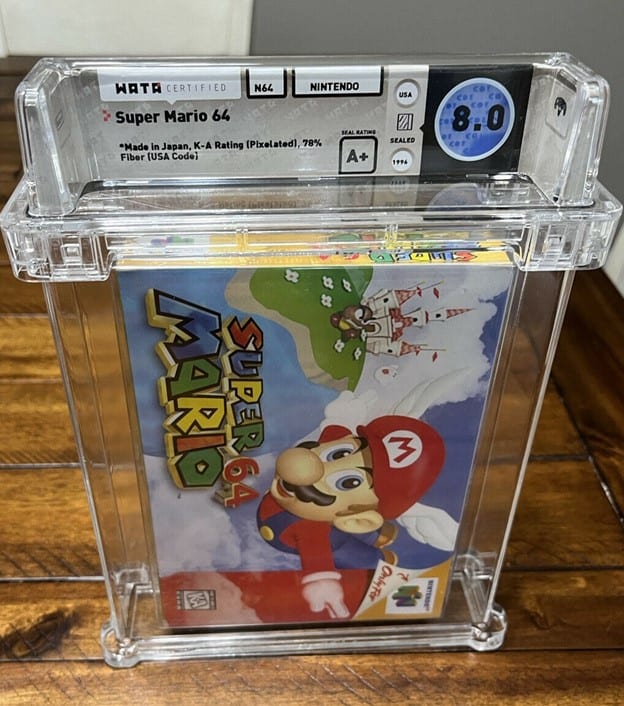 Super Mario 64 is the 3D platformer that kicked off the whole era, releasing in June of 1996 and blowing the two-dimensional minds of everyone who played it. The jagged planes of colored shapes may not look the same today, but the game still has the charm of an artist’s vision, with Shigeru Miyamoto reinventing video games again with the plucky plumber at his side.

Being such a huge seller, copies of the game that are still in the box are worth quite a bit, with one that was Wata certified 8.0 selling for $7,500 recently. Other similar sealed copies have sold for almost as much.

The virtual camera system used in this game, which allowed players to move the camera around the 3D world, was so new to both developers and players that this was the first thing Nintendo EAD designed. It was so novel that for fear of the players getting confused, they designed a character, Lakitu, to physically carry the camera throughout the game. They told the player that the stick controls Lakitu so that they didn’t have to wrap their head around “controlling the camera.” 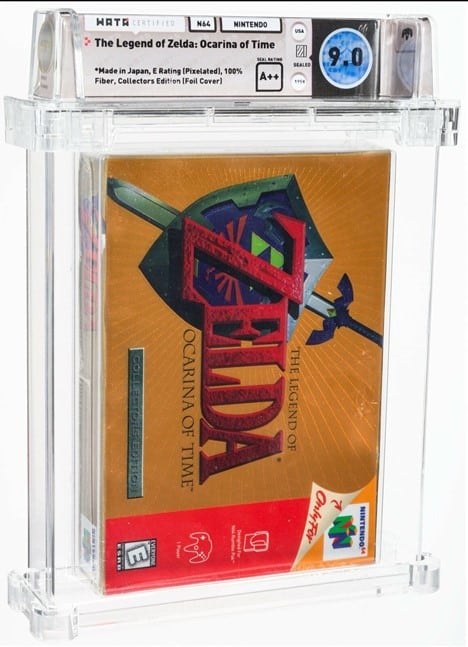 The Legend of Zelda: Ocarina of Time used to be on everyone’s shortlist for the greatest games ever made. While that has lessened over time, the value of a new-in-box copy of the game has not. A copy certified Wata 9.0 sold for $8,300.01 earlier this year, ensuring its place on this list.

This was the collector’s edition, which was only for collectors – the games themselves are identical. This version has a different box with a foil shine over the emblems, a background pattern, and the words “Collector’s Edition.” The real draw though is the shiny golden cartridge compared to the standard grey one.

Ocarina of Time was developed by Nintendo EAD, which stands for Nintendo Entertainment Analysis & Development Division. It is distinct from the main Nintendo offices and is most famous for its work developing the Zelda games as well as the main Mario series. Though Shigeru Miyamoto is instrumental in producing and developing many of these titles, he was not one of the five directors on Ocarina of Time. 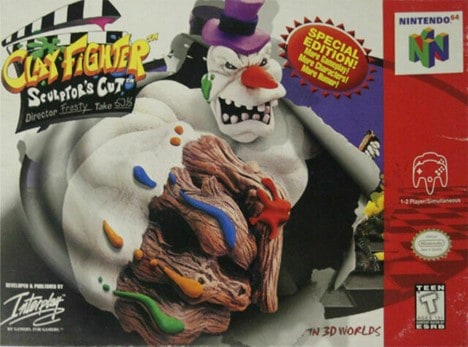 When ClayFighter 63 ⅓ came out, the players who experienced it knew that this was something different. Unlike most Nintendo games, this one had a distinctly arcadey feel to it, with the 3D digitized sprites, ominous backgrounds, and sense of humor feeling more like a Mortal Kombat game than a Mario one. This 2D fighter even features “Claytalities,” a reference to MK.

ClayFighter: Sculptor’s Cut is an updated version of the game that tweaked the gameplay and added 4 new characters. It frequently sells for over $8,000, with one auction ending at $9,199 earlier this year. The reason: this version of the game was exclusive to Blockbuster Video, making it now an exceptionally rare find.

This game was originally planned to release on the M2 console by Panasonic. However, after that console’s production was canceled, ClayFighter moved to the N64 and PS1, though the PS1 version was also canceled. 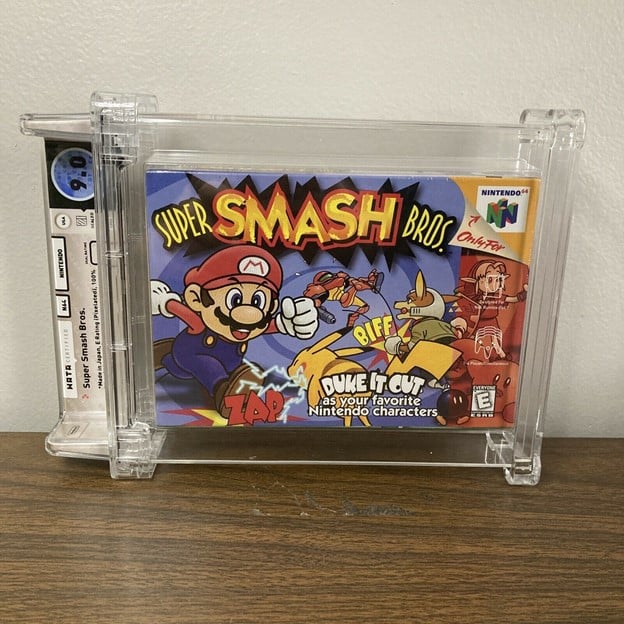 The most expensive N64 game is Super Smash Bros. This crossover fighting game spawned a huge series spanning many games and consoles. Many gamers were introduced to characters that are now staples of gaming culture through Super Smash Bros., including Ness from the Famicom RPG Mother as well as Captain Falcon from the F-Zero games.

The game was huge, selling over 5 million copies around the world. Normally, that would make it less expensive, and this is true if we’re talking about the cartridge only. However, for a new-in-box copy of Super Smash Bros., bidders are confronted with the console’s most expensive game, especially if it’s Wata certified 9.0 like the one that sold earlier this year on eBay for $20,000.

Despite being one of Nintendo’s most profitable franchises, Nintendo itself didn’t develop Super Smash Bros. It’s actually a HAL Laboratory game, the company also responsible for the Mother and Kirby series.

The most well-preserved N64 games can be worth thousands of dollars. Despite selling millions on release, the unplayed games are now the most coveted, with these in-box games representing some of the collecting world’s holy grails. Use this list as a reference next time you go thrifting.

8 of the Most Expensive Cuts of Steak Available